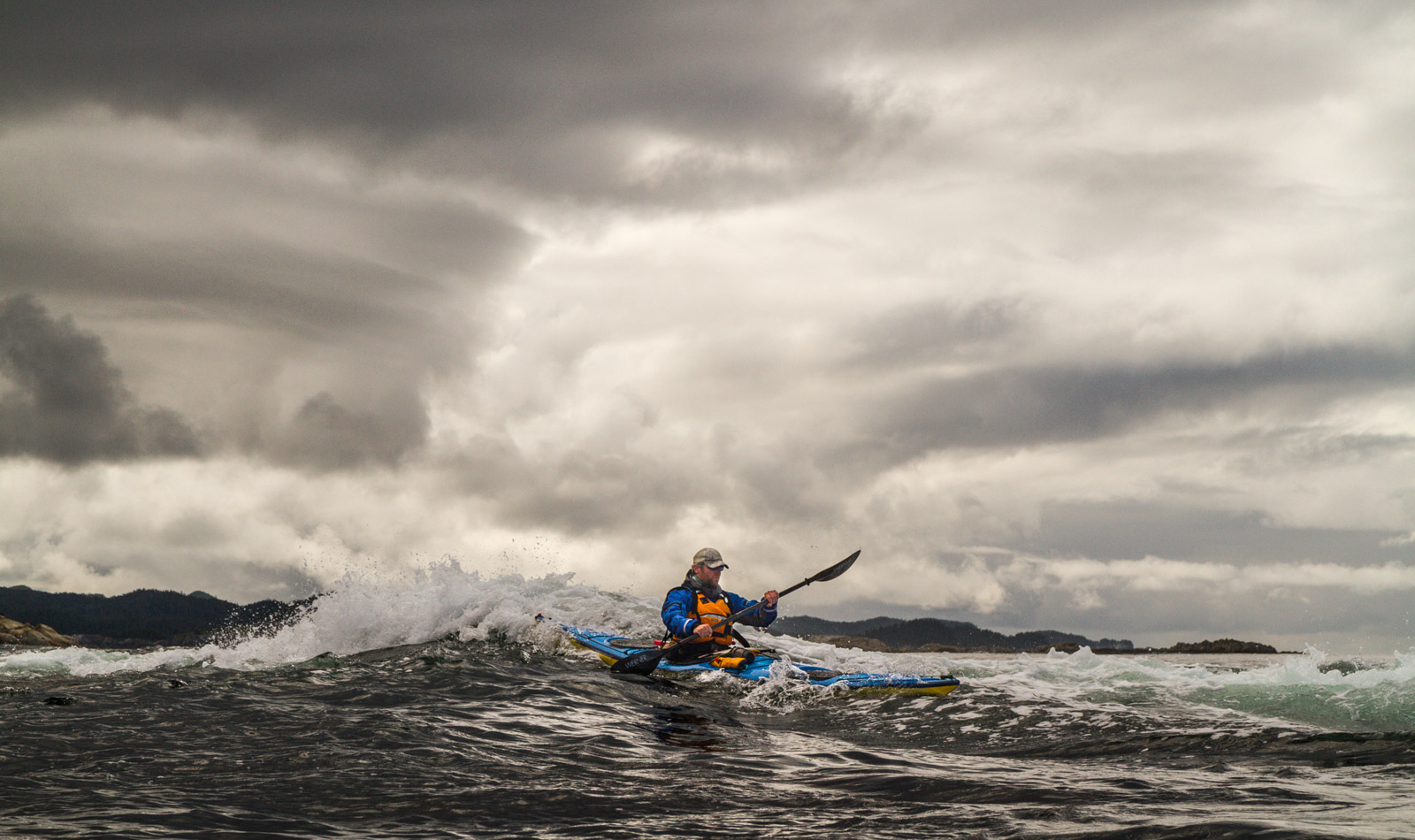 On a July evening in 1741 the Russian sailing vessel St. Paul spotted birds and floating trees, a sure sign they had reached the unmapped coast of North America. The ship’s Captain, Alexei Chirikov, had become separated weeks earlier from Captain Commander Vitus Bering and his vessel the St. Peter. Eager to make a name for himself, Chirikov sent a launch ashore to claim the land for Russia. It never returned. Nor did the second one. Left with no other landing craft and limited water, the St Paul was forced to return to Russia. Needless to say, today the narrow strip of ocean that separates Asia from North America is not called “Chirikov Strait”. No one ever found out what became of the Russian sailors.

Seven years ago while paddling the same stretch of coast —what is now the outer coast of southeast Alaska, I was sure they had been dashed on the rocks. Paddling with a somewhat unwitting companion in late September we ran between storms and dodged huge booming surf on offshore reefs, always on the lookout for protected water and fearful of trying to land anywhere on the exposed coast. I imagined small wooden boats with naïve foreigners to be no match for such a place. As for our motley crew of two—we successfully made the trip from Sitka to Hoonah that year, but my fellow paddler refused to ever kayak with me again.

Since then “Sitka to Hoonah” had loomed in my mind as the ultimate Southeast Alaska kayak adventure. Away from the famous glaciers, cruise ships, and protected waters of Alaska’s fjords, it offered a true wilderness trip, with all the wild conditions the northern Pacific had to offer. This summer, I made plans to return with the photographer Daniel Fox, and Debbie Hingst, my friend and former kayak student. Debbie found kayaking later in life, but pursued it with the same determination that served her as a bush pilot and public health nurse in the Alaskan bush. She had progressed well and was keen to push her limits.

Our journey would cover 140 miles in 11 days, with shuttle logistics on both ends provided by the ferries of the Alaska Marine Highway, the main source of transportation for people in this part of the world. We’d thread a course through islands large and small, following the outer coast of Chichagof and Yakobi Islands north to Cross Sound, then head into the inner waters of Icy Strait, before arriving in the native Tlingit village of Hoonah.

“Sitka to Hoonah” had loomed in my mind as the ultimate Southeast Alaska kayak adventure. Away from the famous glaciers, cruise ships, and protected waters of Alaska’s fjords, it offered a true wilderness trip, with all the wild conditions the northern Pacific had to offer. 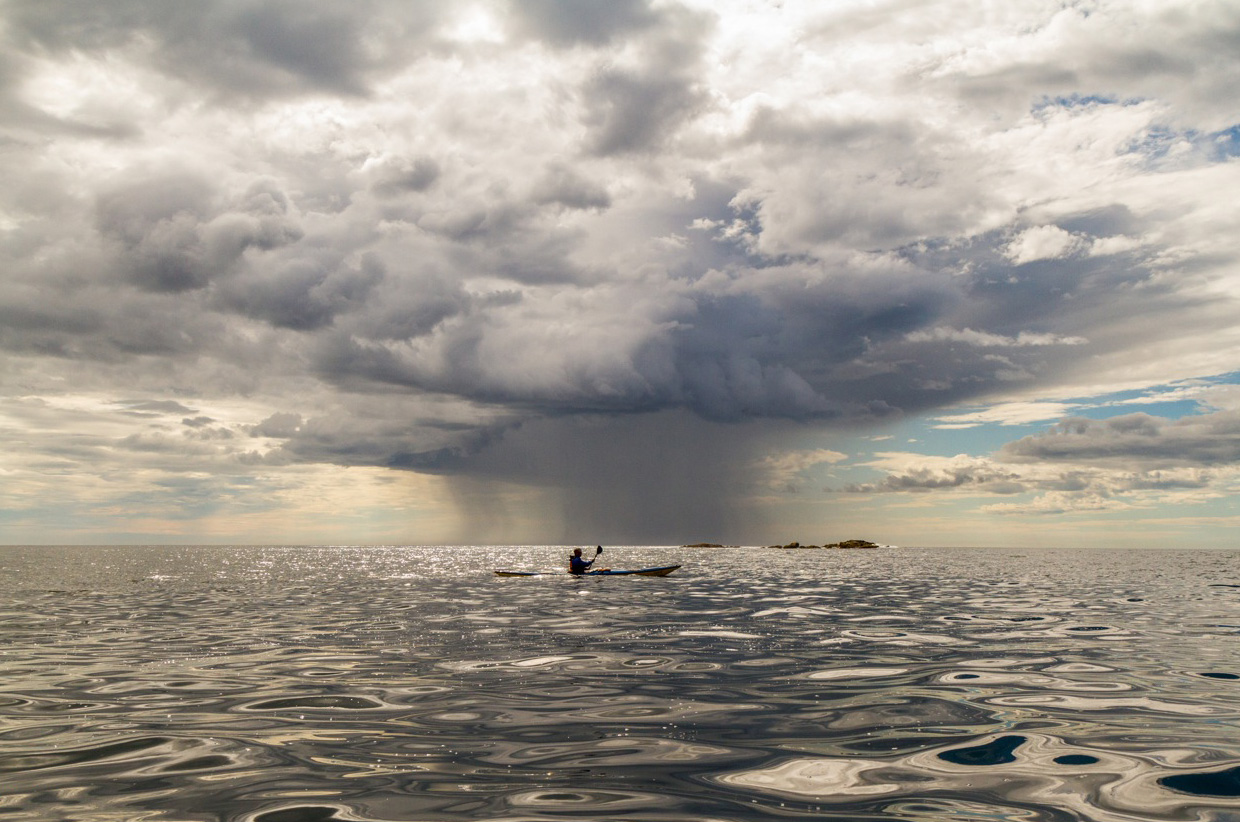 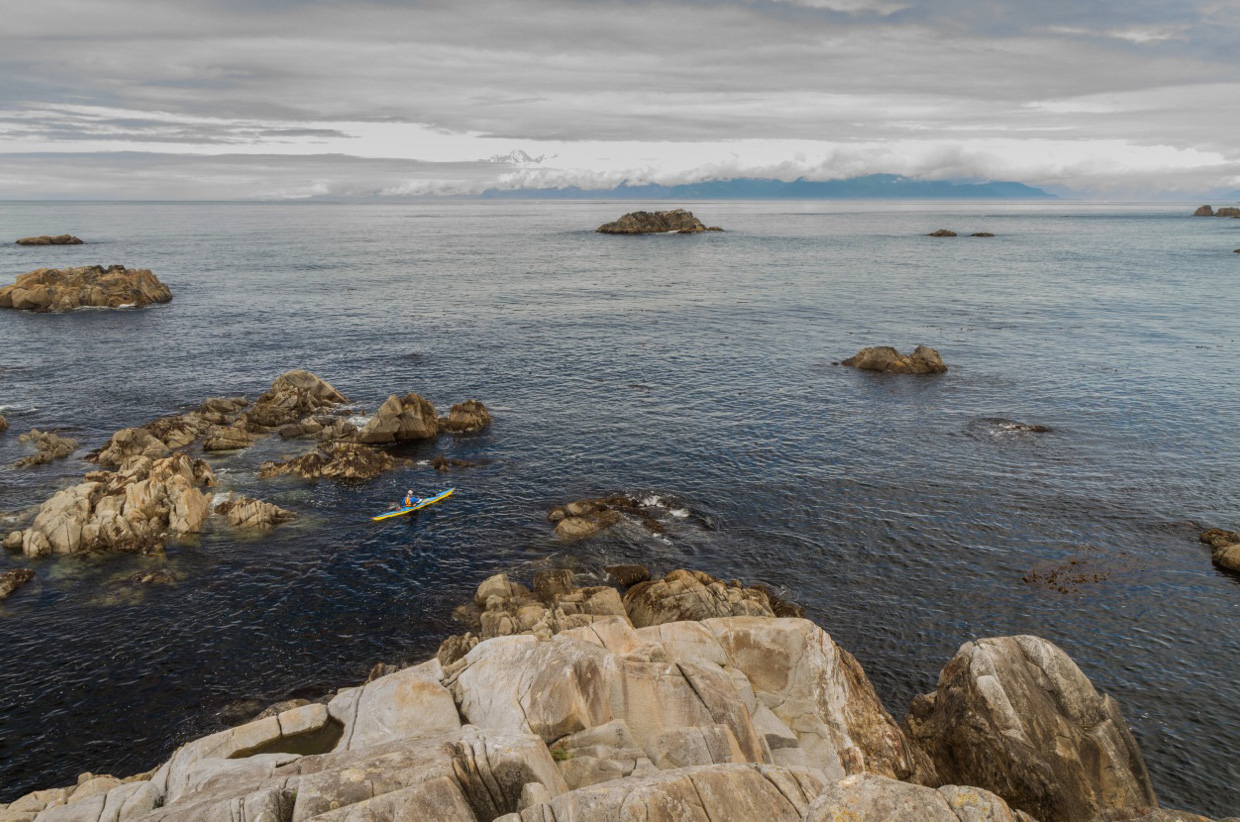 Timing is everything. The summer of 2013 will long be remembered in Southeast Alaska as one of most benign ever. Warm temperatures, light winds and calm seas prevailed. We started our trip in Sitka and cruised up past Kruzof Island where we got our first look at the area’s legendary brown bears, in this case a sow and cub feeding in the surf on a beautiful sandy beach in Sea Lion Cove. August in Southeast Alaska is a time of incredible bounty. The five species of Pacific salmon are returning to their spawning grounds in streams all along the coast. This brings in the coastal brown bears, more plentiful on these islands than anywhere in the world. They’ve been subsisting on plants and mollusks for most of the summer and more than ready to get some real calories before the long northern winter. The scraps they leave behind get dragged into the forest and munched on by bald eagles, river otters, ravens, and weasels. Smaller bits break down and bring ocean nutrients to the forest, setting the stage for future generations of salmon fry. Here the web of life plays out before your eyes.

A minke whale surfaced just a few feet from our kayaks and loons, murrelets and guillemots were constant companions. We took advantage of meager swell and light winds to paddle inside dramatic sea caves and arches. We found a blowhole spouting from a crack in the cliffs and squeezed our boats in close enough for a cooling pummeling from nature’s fire hose.

With such calm conditions our group was able to explore so much of the area that is usually off-limits due to weather. We paddled far offshore to the White Sisters Islands, a rookery for the Steller Sea Lion. When we reached the islands, Daniel sidled up for a photo and got more than he bargained for—a greeting party of 30 of the big noisy guys came out to show him what sea lion breath smells like (not good, natch). A minke whale surfaced just a few feet from our kayaks and loons, murrelets and guillemots were constant companions. Continuing on to the north we took advantage of meager swell and light winds to paddle inside dramatic sea caves and arches. We found a blowhole spouting from a crack in the cliffs and squeezed our boats in close enough for a cooling pummeling from nature’s fire hose. Cooling off in a blowhole? Paddling through sea caves? Was this Alaska or Mexico?

As we reached Cross Sound and started to make our way towards the inner waters humpback whales joined us. The strong currents generated by the huge tidal exchanges in this part of the world bring in phytoplankton and zooplankton from the Gulf of Alaska. They in turn draw in huge numbers of small silvery fish: herring, capelin, and sandlance. We knew when we paddled over a school of capelin in particular. Strangely, the little silver fishes give off the unmistakable odor of cucumbers. Drawn by the huge schools of baitfish, humpback whales spend the summer at this very productive buffet, gorging in preparation for the return to winter breeding grounds in Hawaii. The sounds of breeching in the distance, tail slapping, lunge feeding and just plain breathing would become the soundtrack for the second half of the trip. 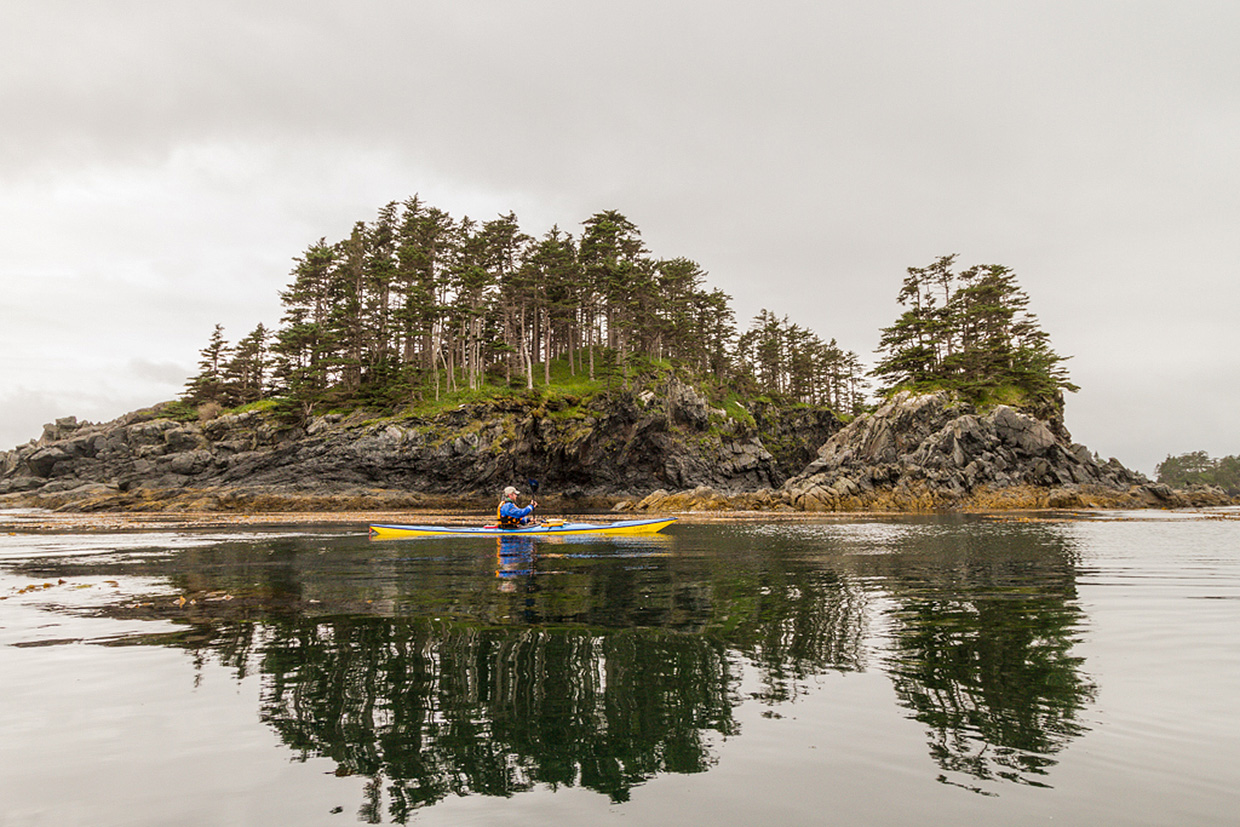 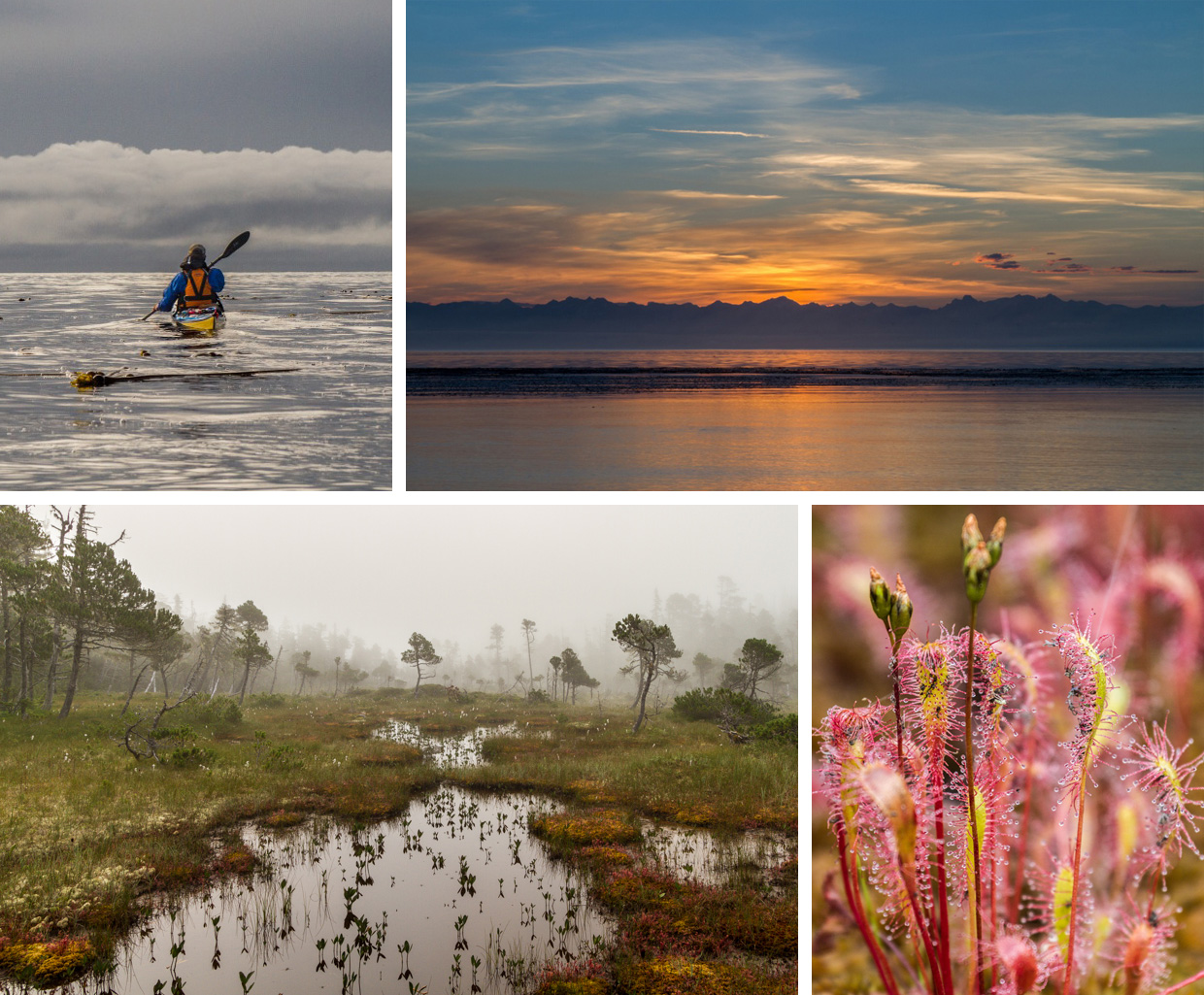 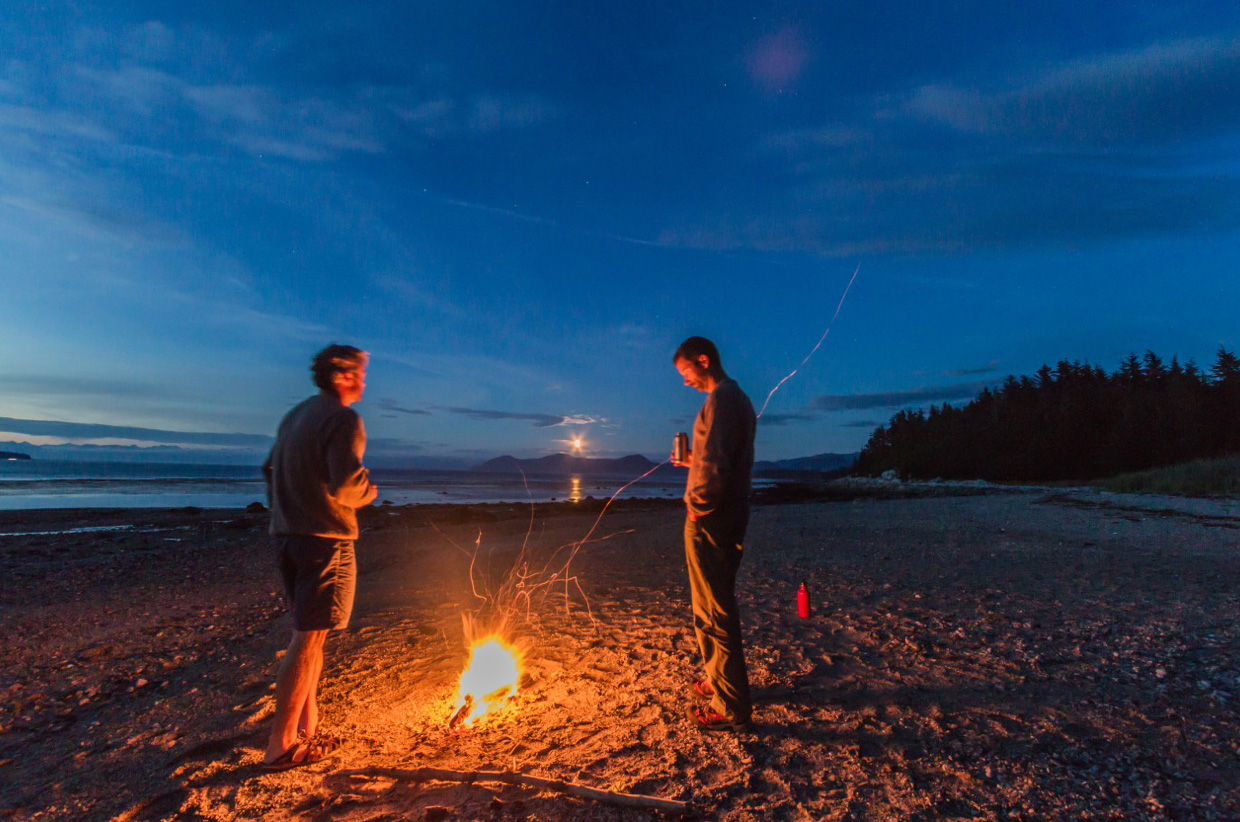 Those same currents that feed the whales make for great skills practice. The Inian Islands are the gateway between the open Pacific and the inner fjords, so a huge amount of water passes through them with each turn of the tide. In one channel known as Mosquito Pass, we found another sea lion haul-out area. Dozens of them played in the currents, jumping in groups like a sea lion synchronized swimming team. As we watched, the current in the channel between the islands kept building with the flooding tide until it flowed like a strong river, complete with whirlpools and standing waves. The fact that it was flowing in from the ocean rather than out made it perfect time and place to push things a bit. We decided to ferry across. Daniel went first and fought hard to make it to the safety of calm water on the other side. I coached Debbie, who was understandably nervous given the current and the huge sea lions tearing apart salmon in the eddy next to us. Halfway across we realized we wouldn’t make it and I shouted that we should turn and ride the current back to safety. A strong eddy line caught her boat and just like that Debbie was part of a sea lion swim club. She kept her cool and held on to boat and paddle until we could reach her. The sea lions watched with clear interest as we rescued Debbie and collected ourselves. Wearing a dry suit, she was none the worse for wear and soon we were laughing and reliving the ordeal again and again.

Food was everywhere. August is prime harvest time in the north, and subsistence-minded kayakers can do quite well. We supplemented our meals with edible mushrooms and berries, and foraged in the inter-tidal zone for limpets. A lure trailed on a hand-line from the kayaks provided a tasty black rockfish whenever it went into the water. In the evenings we stretched out on perfect gravel beaches by a small fire and watched the sky, now just starting to really darken after the longs days of the northern summer, in hopes of seeing aurora borealis.

On the final night of our journey a brilliant sunset lit up the Fairweather Mountains above Icy Strait. From our camp, nestled in a patch of ripe strawberries and nagoonberries, we gazed out at the glassy ocean shimmering gold and pink. We reminisced on how perfectly the trip had gone in every way. As if on cue, a rare pod of orcas passed by, huge dorsal fins arcing up and down beneath the sunset. My thoughts returned to the 18th century Russian sailors. Maybe nothing bad happened to them- no crushing waves, no deadly rip currents, no unwelcoming natives. Maybe they just fell in love with this place and decided life on shore in this bountiful land was way better than the ship. If so, who could blame them?

See videos from the journey here.

Photographer, storyteller, filmmaker, kayaker, scuba diver, horseback rider & founder of the Wild image Project, Fox is an explorer who uses his narrative to inspire the public to reconnect with the wilderness. Sometimes philosophical, sometimes poetic, his stories, his photos and his videos capture the viewers through all their senses, leaving them sifting through their memories and remembering their own moments when they felt connected.

Nathaniel Stephens has for many years pursued a life as wilderness guide, outdoor instructor, adventurer,and itinerant dirtbag, leading trips and teaching courses around the world. He makes his home in Juneau, Alaska, base of operations for his fledgling company, Narwhal Adventures.

A Short Walk Through India Bare on Night Mountain 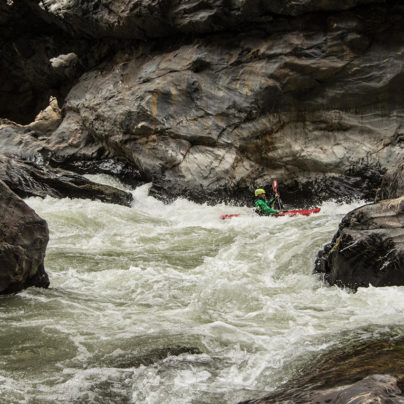 Into The Abysm Rob Litherland