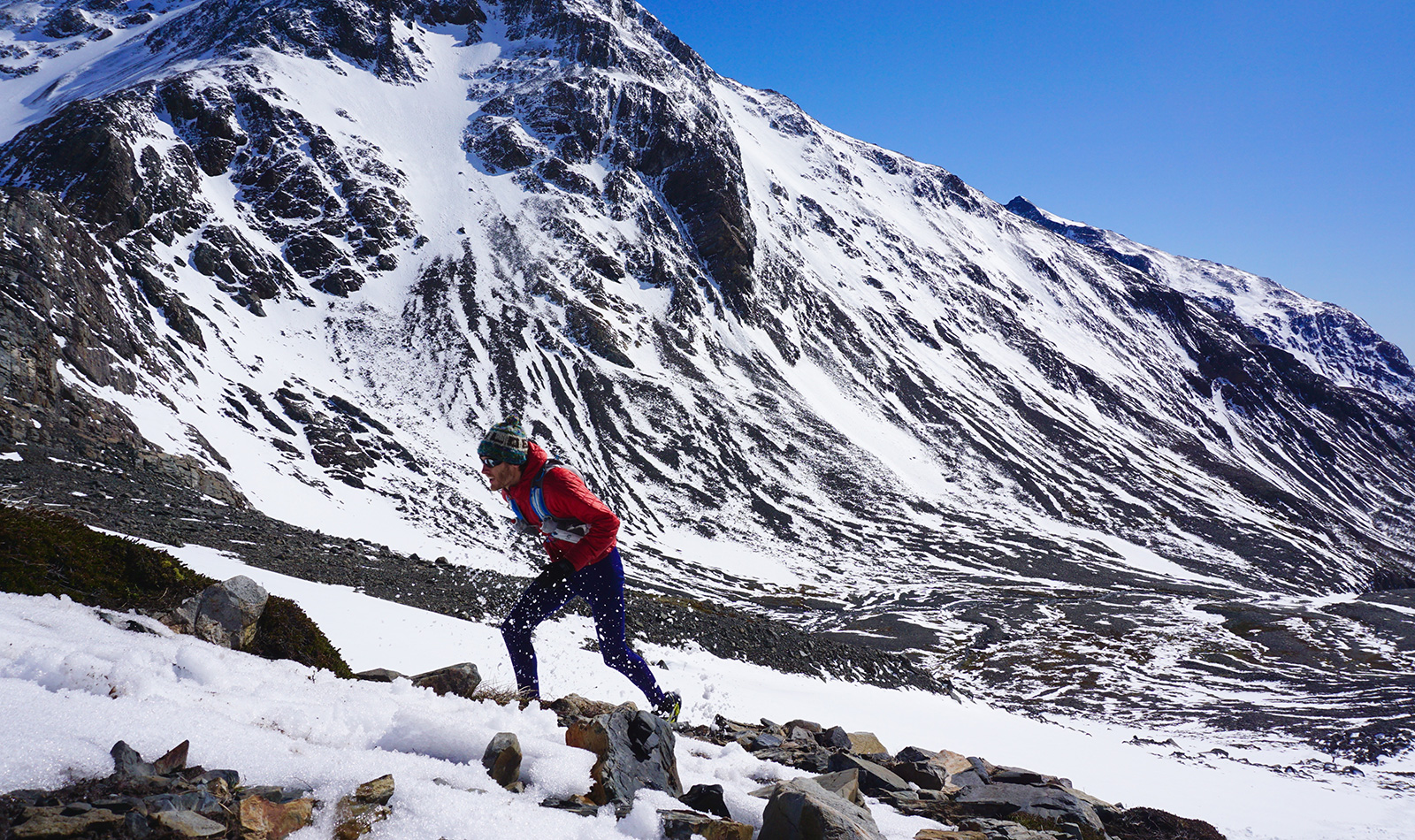 A pack of Chilean horsemen rode serenely through the wave of weary tourists now flooding from the national park. Their walking sticks flailed, adding to the confusion of dust and low light, language, and fading adrenaline. We too made our way through the crowd, heading back out to the mountains, ready for another lap.

James and I had travelled down to Patagonia a week earlier and fast-packed a four-day reconnaissance around the Torres del Paine Massif – a classic 60-mile trek known as the ‘O’. Mountains cast from ancient seabeds spanned the horizon, fantastical creatures grazed the lowlands and 80 year old condors planed the sky. We skipped campsites, missed meals and drank the bare modicum of beer respectable for such an endeavour. After that breathless warm up, we whittled down the weight of our packs, turned the speed up even further, and decided to begin again at 2am – attempting to run the route in a single, non-stop push.

Fifty years ago, few Westerners had visited Torres del Paine, let alone run in its mountains. Yet that isolation could not protect its secrets forever. Gradually climbers arrived to scale the virgin faces and mountaineers pioneered new trails through the backcountry. The weather at 50 degrees south is temperamental and the access to the park is still by dirt road. Nevertheless in peak season the nearest town of Puerto Natales throbs with eager travellers, hinged on the edge of discovering the most coveted jewel in Patagonia’s crown. During our four-day reconnaissance, we had come across the most intrepid of these travellers, on the backside of the O. After greeting them politely, we invariably pressed on, nursing the seclusion we needed for our sense of adventure.

When the 2am alarm went off, it was a silent and very still Patagonian night. I unzipped the tent, slowly unwrapping the moment. Savouring the anticipation of our private trip around the mountains. The light of the moon was enough for us to make our final preparations in the campsite. Soon we were whispering along the trails of the O’s eastern arm, the last heat fading from our abandoned sleeping bags.

When the 2am alarm went off, it was a silent and very still Patagonian night. I unzipped the tent, slowly unwrapping the moment. Savouring the anticipation of our private trip around the mountains. 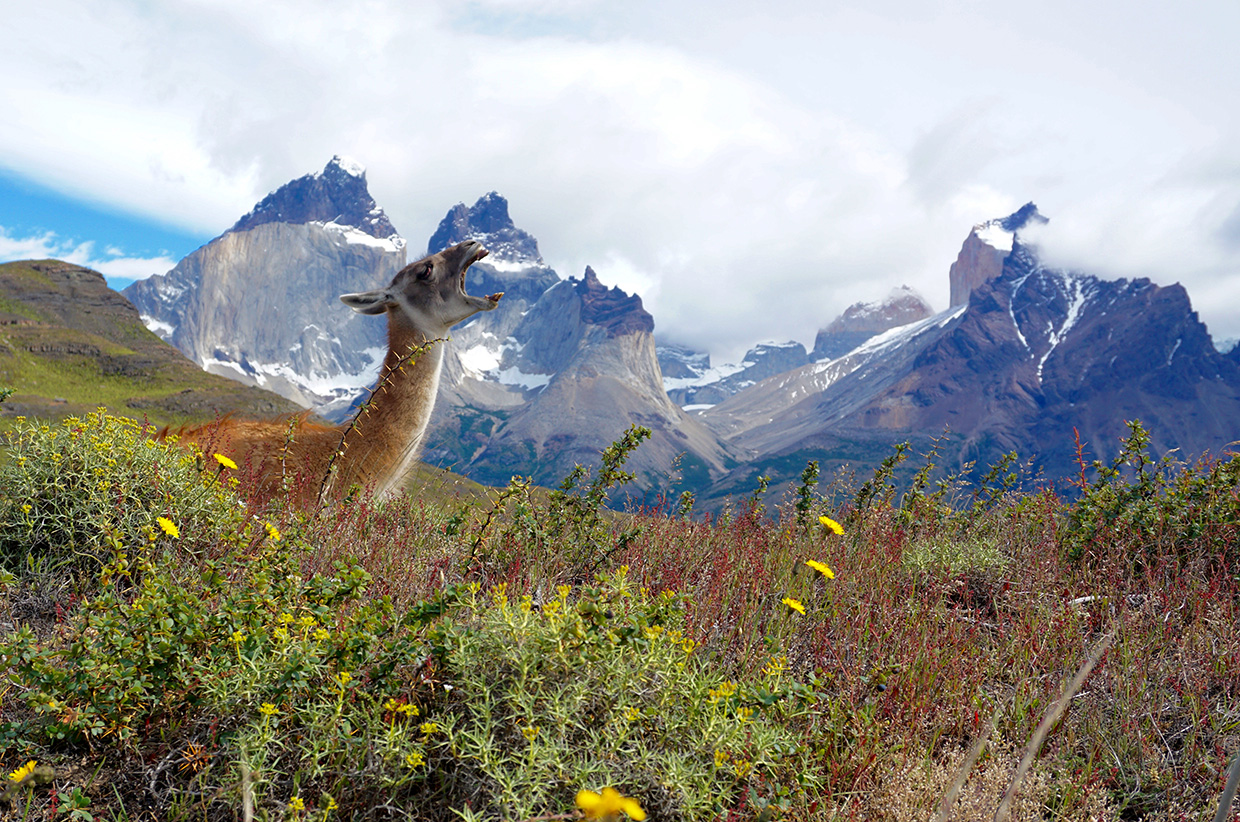 Our words tumbled out breathlessly: Was it a puma? Where was it now? The narrow trail and thick bushes pressed heavily with the shadow of that recent predator. We ran on, faster now, towards morning.

The O has several campsites and there are official closing times for the trails that connect them. This works well for helping campers arrive safely each evening, but are inconvenient if you’re not stopping at all. Noticing there were no opening times, and reasoning perhaps just with the letter of the law, we had chosen to start at 2am and expected to be finished before evening. An hour into our run however, we encountered an obstacle that nobody could have anticipated. A carcass.

Stretched across our path and illuminated by our head torches – just a mane, a ribcage, and hooves. The river ran loudly. Our words tumbled out breathlessly: Was it a puma? Where was it now? The narrow trail and thick bushes pressed heavily with the shadow of that recent predator. We ran on, faster now, towards morning.

Dawn is never there until it is. At 5am a river and warden’s cabin rushed to our attention – our beams of focus suddenly blown open. What else had we missed in the shadows of the night? Mountains were silhouetted clearly now and birds were poking noisily amongst the undergrowth. Yet even at first light, we still felt like trespassers on the trail and were anxious to avoid problems. Hovering somewhere between subterfuge and a desire not to disturb the warden’s sleep, we tiptoed into view, before mischievously breaking into a run and disappearing out of sight.

There was a 10am time limit for reaching the Gardner Pass and our run would be over if we didn’t make it. We pushed hard through the woods on the backside of the mountain; the trail tested us – an undulating rollercoaster – but the adrenaline of our deadline got us there with time to spare. From here, at Camping Los Perros, it was another two miles before we would emerge above the tree line and into the snow. Summer was on the march, however, and we ran uphill with light packs over the meltwater that now coursed over newly exposed rock. The frosting on the rock faces had receded since our recce just four days before. I had a sensation now of déjà vu, as if the valley we were climbing was a watered down facsimile of an adventure already had. Glacier Grey – that frozen leviathan of millennial ice – freshened the air once we reached Gardner Pass. We glissaded down towards it, back into the trees, the glacier’s expanse filling the gaps between leaves and branches, as if descending into a cloud-filled sky. 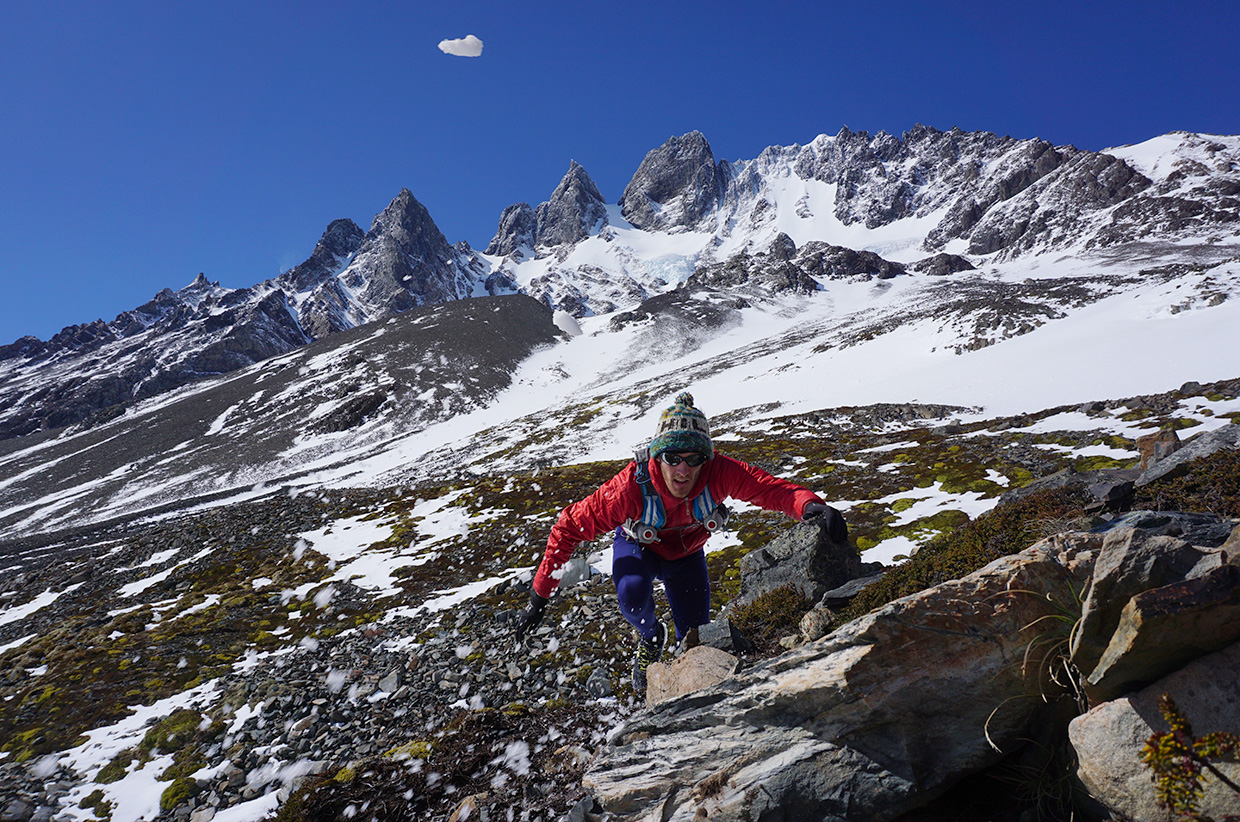 Shadows were still short when we started to fall apart. We had chosen to run the route in a completely self-sufficient style, carrying all the food we needed for the duration of the run. With over 15 miles left we had only three gels between us. There had been a chance to resupply at the shore of Lago Pehoé, but we had long since set the dials of difficulty and hardship to our liking. Hikers had already stopped for the day and were now bathing in the cool lake. We lost our rhythm and walked the up hills, speaking little. The challenge was exhausting, but no longer absorbing or in doubt. Our thoughts were fixed instead on when it would be over, and we could seek solace from the fulgent sun. The mountain faces shifted, pixelated through the heat, grinding slowly back to their starting position, until finally our tent was insight.

We rose late the next day. The buses were loading under an overcast sky. We hobbled painfully to the corral where unexercised horses clashed around with nervous energy and the Chilean horsemen were resting. And then with a whistle and a nod we were invited into their private space.

Inside it was dark and musty and warm. We sat on a roughly hewn bench. Warm water was poured from a thermos over dusty mate leaves; the single drink served, topped up then passed along. We talked a little of our adventure: our attempt to be the fastest around the mountains at the end of the world. Old eyes watched, smiled, wrinkled. Rough hands passed mate in silence. We fiddled with our watches and cameras, reassuring ourselves of the treasures captured and the achievements we had so speedily recorded. After a time, the horsemen stood up. They gathered their saddles, and slowly headed back towards the mountains. Returning to the adventure of their lifetime.

Matt Maynard is a writer and environmentalist. He lives in the mountains near Chile’s capital Santiago. You can find more adventures and projects at Matt-Maynard.com and keep in touch via Facebook and Twitter. Reach out if you’re on a South American adventure, and pop in for a cup of tea in person.

The Book of Laughter and Forgetting Big Cats and Bus Shelters