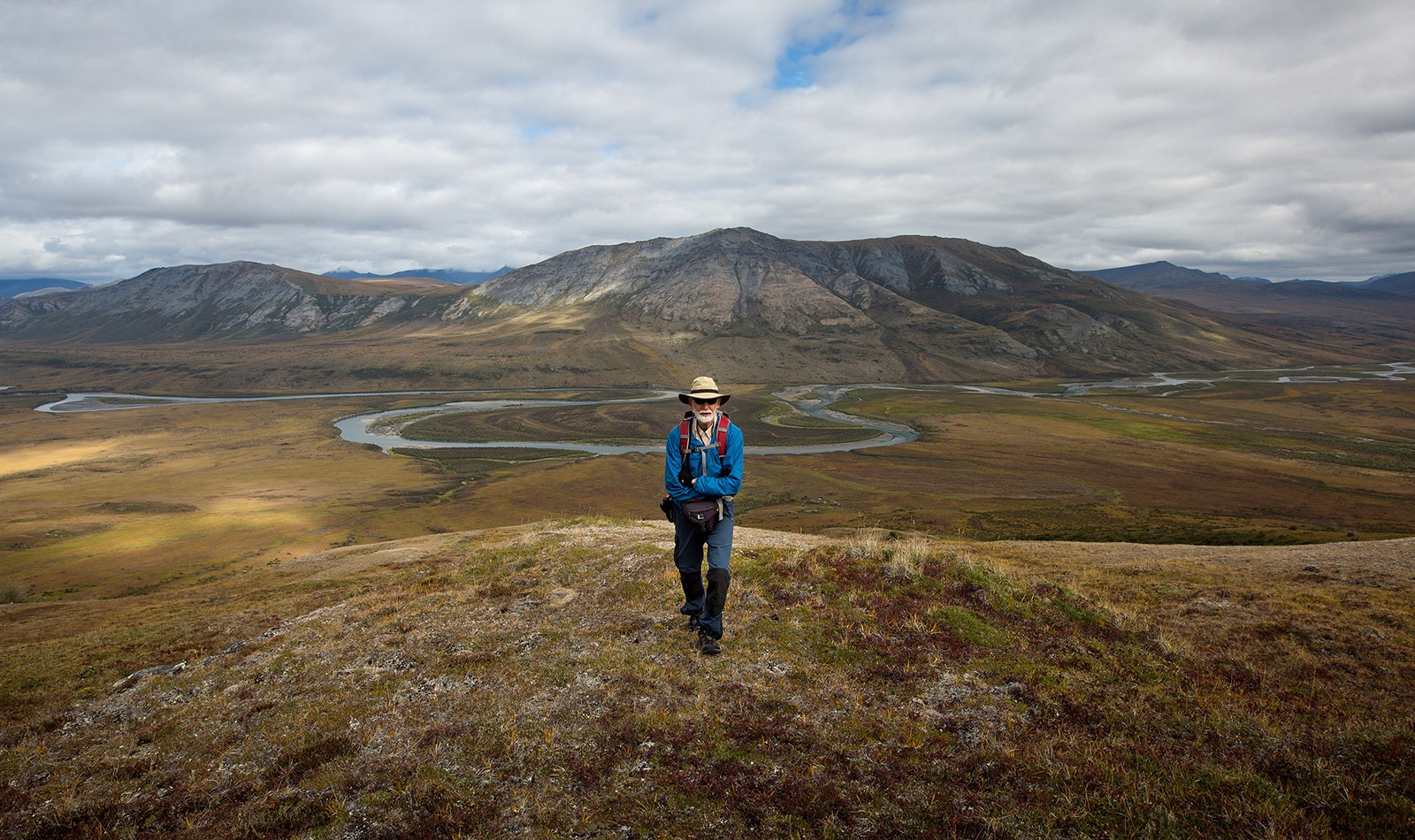 Return to the Arctic

Words and photography by The Muir Project

Our third day in the expansive wilderness of the Brooks Range found us returning from an afternoon hike to the domed pingo visible from our camp on the banks of Noatak River. Trekking alongside us were Jim Slinger and Andrew ‘Tip’ Taylor, two men with whom we’d exchanged emails over the past few years but only now were getting to know on a more personal level. The hike provided a much-needed opportunity to stretch our legs and break away from where we’d been tethered, waiting for the plane to bring our remaining food and gear. Three days earlier, our bush pilot had been restricted to only one flight into Gates of the Arctic National Park due to a series of storm systems and limited visibility from nearby forest fires. We opted to transport all five in our group, leaving most of our provisions and gear (including our boats) in the airstrip town of Bettles, hoping that the pilot could deliver them the next day.

Later that night, we debated how to further ration our food for the days to come, should the unpredictability of the Alaskan wilderness continue to prevent a resupply. These discussions were nothing new to Jim and Tip. The two men met on the Yukon River in 1975. A friendship developed, and they made plans for another Arctic river trip. Forty years later, the retired professor of philosophy and tenured professor of nuclear medicine have spent the equivalent of nearly two years on Arctic rivers. Tip explained, ‘Ritual is an enormous part of human activity, and those rituals give meaning to our existence. But with time, those rituals no longer have the same impact in someone’s life. And I think by accident, by chance, Jim and I started going down rivers together. There was the adventure, the friendship, the spectacular beauty, and in some ways it became a ritual that helped give meaning to my life.’

The next morning, we awoke to blue skies and snow-capped peaks previously hidden by low-lying clouds. The warmth of the morning sun broke through our damp tents, and our spirits were renewed with the distant sounds of a prop plane echoing against the valley walls. In a short time, our pilot touched down on a small lake near our camp. After unloading the plane and confirming where he’d be picking us up six days later, the pilot returned to Bettles, and we began carrying gear over the moist ground back to our riverside camp. I asked Tip how adventure changes with age and he responded, ‘There are certainly more limitations as I get older. I can’t do all of the things I was able to do in my forties, fifties or even sixties.’ Nevertheless, watching Jim and Tip carry a large dry bag and metal drum of food over their shoulders was a reminder that adventure is not limited to the young. The two friends continually challenged our expectations for what lay ahead.

Jim and Tip immediately began assembling their Pakboat canoe. Seasoned on a variety of watercraft including hard-shell and inflatable canoes and Klepper kayaks, this was their first time on the river with a pak canoe. The design allows the canoe to be transported by plane as baggage, but requires considerable effort to build. The end result, however, was a faster and more manoeuvrable vessel on the river than the Avon raft we paddled alongside the two friends.

‘Jim and I started going down rivers together. There was the adventure, the friendship, the spectacular beauty, and in some ways it became a ritual that helped give meaning to my life.’ 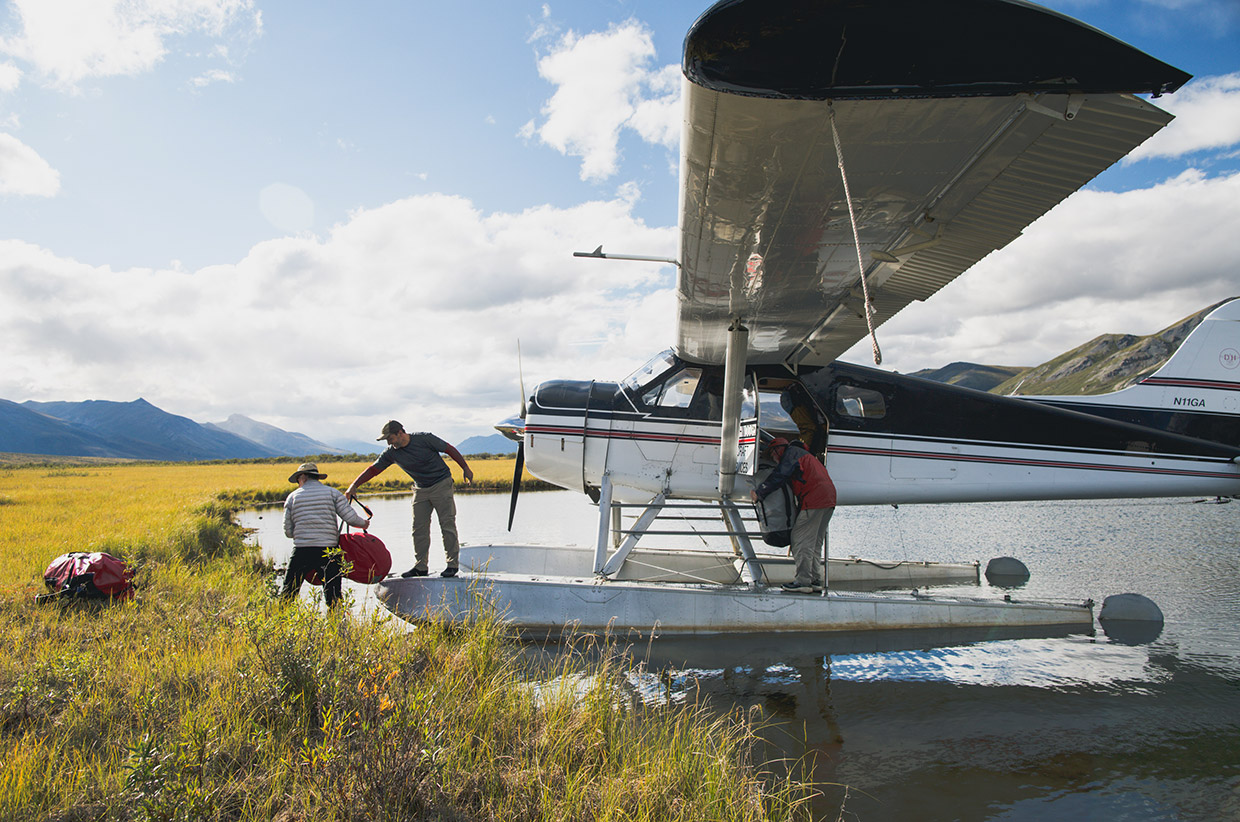 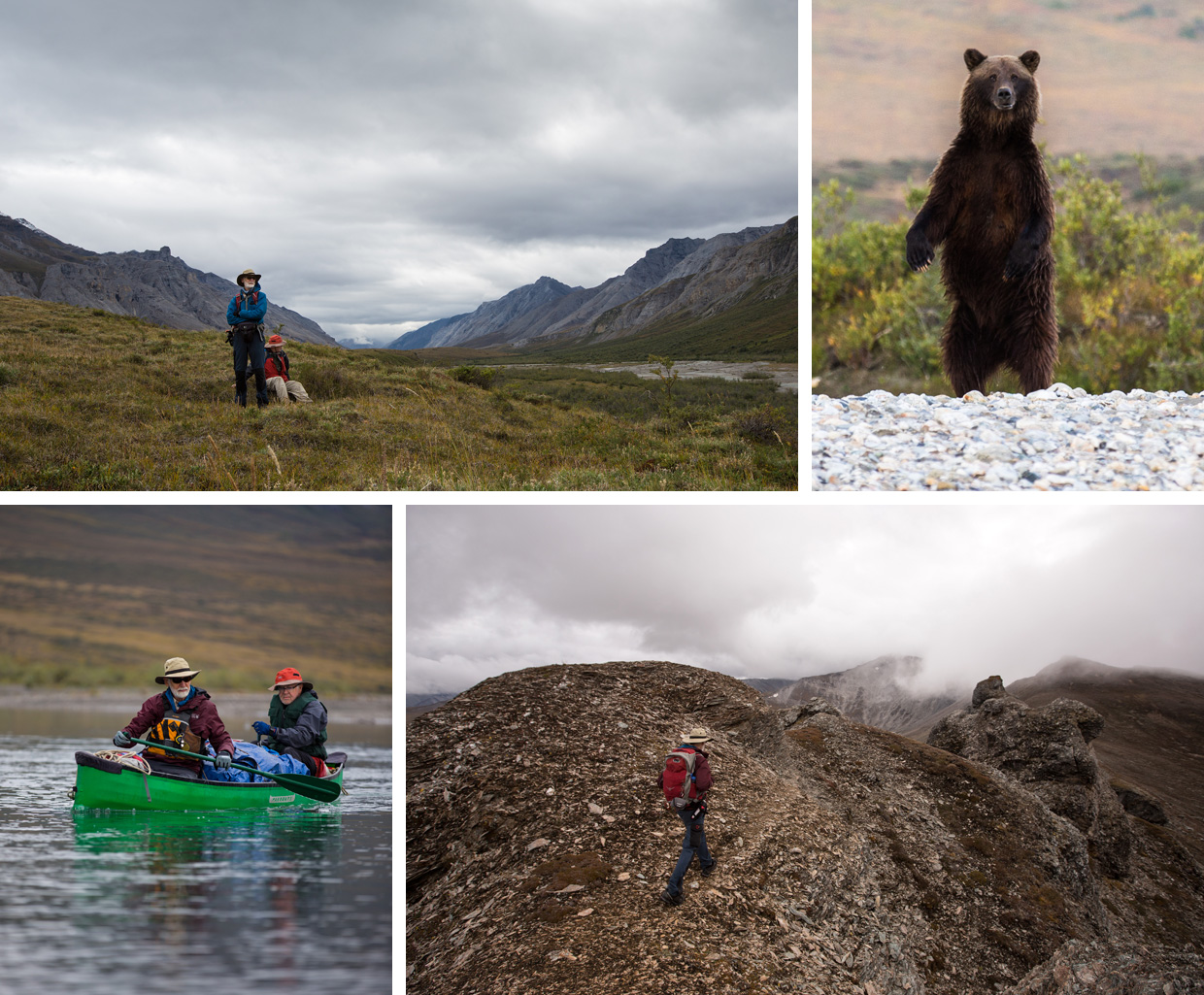 The Noatak is a river in northern Alaska that runs along the north part of the Brooks Range, which is the northernmost mountain range in Alaska. It starts in the Gates of the Arctic National Park, runs east to west for about 400 miles, and is one of the longest rivers in North America unaltered by man. We were all anxious to get on the river, and a 6.00pm departure was not out of the question considering the long August evenings above the Arctic Circle. Jim recounted, ‘In 1980 we did the Noatak from Matcherak Lake,’ and Tip chimed in, ‘If somebody had told us that we would be coming back down this river 35 years later, we wouldn’t have believed it.’

We continued our hike through the sedge tussock marsh and up the tundra hills rising into the heart of the rain-soaked valley, flanked on either side by steep cliffs and even higher mountains. What we lost in dry clothing we gained in scenic beauty as the valley was drenched in cloud and moisture.

During those initial moments floating downstream I was overwhelmed that we had the opportunity to join two friends whose humble nature and soft-spoken insight elevated the experience to a new level. Watching Jim and Tip gracefully travel along the Noatak’s current, reading its changes as easily as they conversed over a meal in camp, continued to inspire us. Jim remarked, ‘For me, rivers are transfixing and spellbinding. Rivers take you places, rivers move, rivers are alive.’

The following morning, we decided to hike up the Kugrak River into a valley overlooking our temporary home along the Noatak. Only a short distance out of camp, we encountered two adolescent grizzly bears on the opposite side of the shallow river. One crossed to our side but kept its distance; we grouped together, spoke loudly and backed away to what we hoped was a safer area. The bear looked at us briefly and then ambled on the far side of the river, likely in search for salmon.

We continued our hike through the sedge tussock marsh and up the tundra hills rising into the heart of the rain-soaked valley, flanked on either side by steep cliffs and even higher mountains. What we lost in dry clothing we gained in scenic beauty as the valley was drenched in cloud and moisture. At one point, Tip and I were reminiscing on the impact of chance in our lives and how minor interactions can sometimes lead to the most unexpected relationships. ‘Just think,’ he mused, ‘we wouldn’t be here with you right now had you not stopped to take our photo four years ago.’

He was right. During our 2011 hike along the John Muir Trail in California’s Sierra Nevada mountain range, we’d met Jim and Tip at the hut atop Muir Pass. We spoke briefly, and I grabbed photos and contact information before we headed our separate ways. In the years that followed, we interviewed Jim on-camera for our documentary, MILE… MILE & A HALF. It didn’t take long before they invited us to join them for one of their semi-annual Arctic river trips. And now, here we were.

The next day carried us along a winding but gentle river under cloudy skies and intermittent rain, leading us to our third camp at the foot of two mountains. We’d decided to hike up there early the following morning. It was a much steeper hike than the Kugrak, covered with tussocks and blueberries. There were patches of sun in the early hours of our upward journey, but the clouds rolled in and we climbed high into their moisture, toward a shale-surfaced peak with an expansive view of the valley below and the river on which we travelled. Up and down, it was a hike consumed with conversation as Jim and Tip shared stories of hikes past and ambitions for years to come. Jim commented, ‘How many more times am I coming up here? As we get older, that’s coming towards an end. I’m grateful I’m doing as well as I am, but I’m certainly appreciating things like today’s hike more than ever.’ 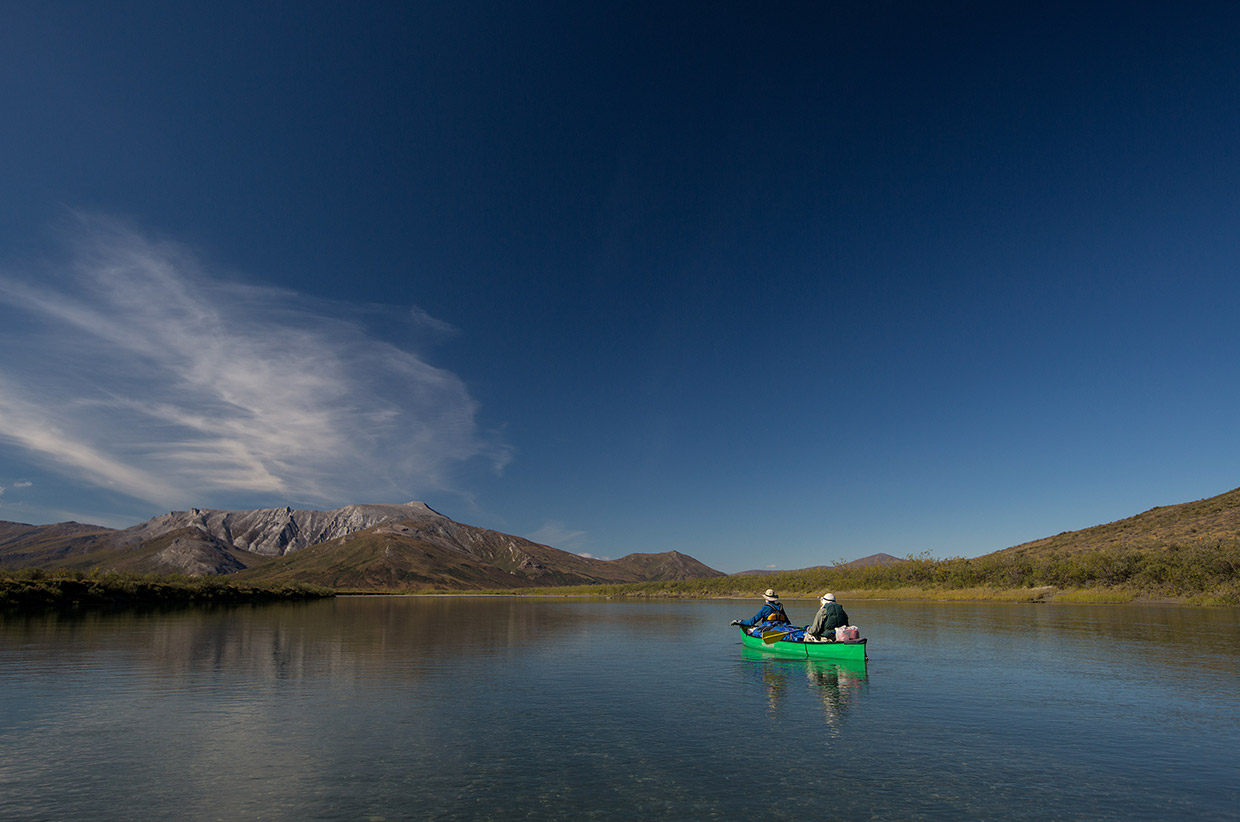 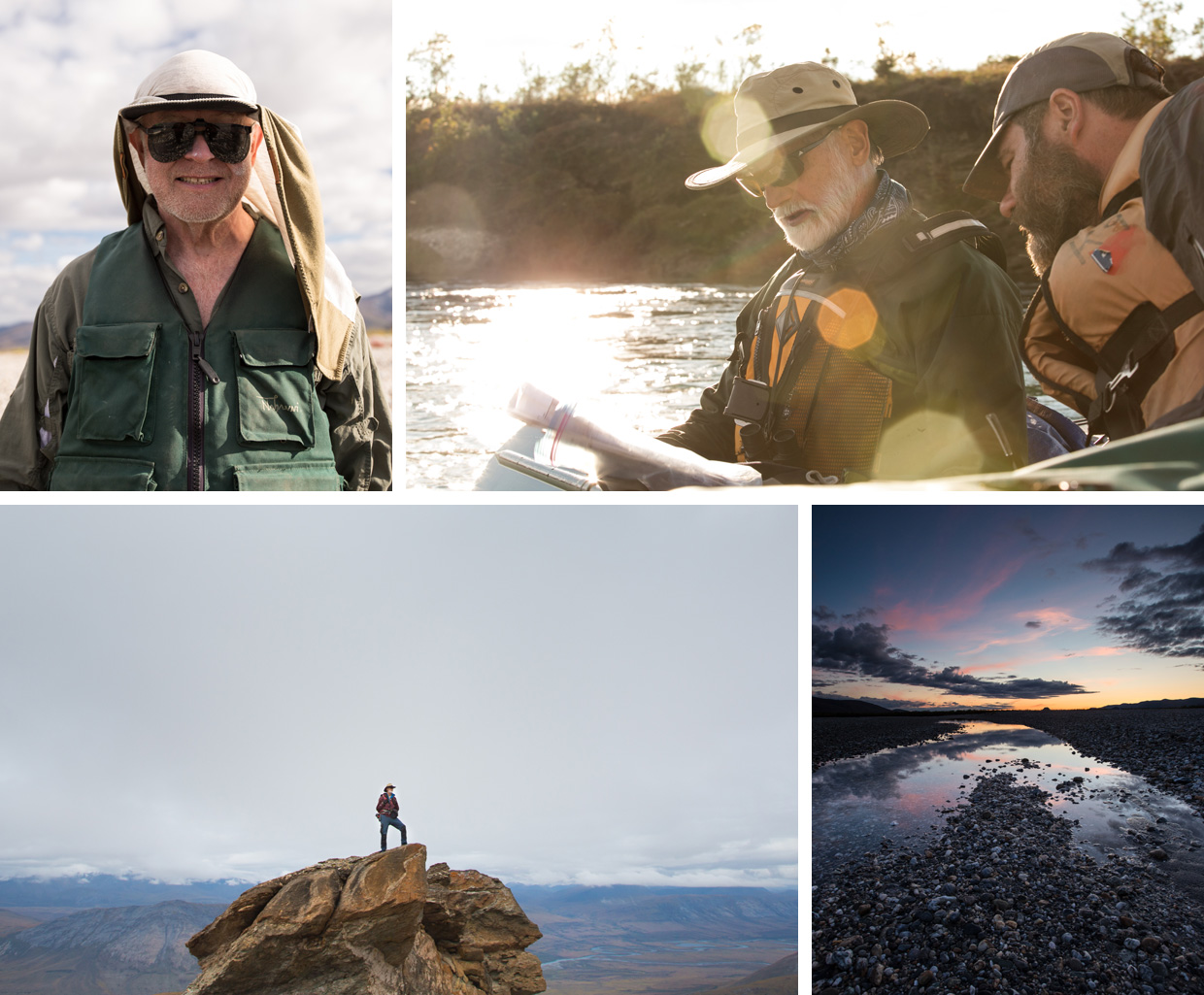 We awoke the following morning to frosty tents, crisp blue skies and the promise of a river day drenched with sun. The delays early in the trip made us keen to put some miles behind us. Over the course of the day, we saw five grizzlies, two of them cubs being scolded for inquisitively following us along the banks of the river. The clear skies continued as we made our way downriver and into the setting sun, finally setting up camp on a large island that was clearly a seasonal feature, revealed only during the receding waters of late summer. It was our most spectacular sunset yet, lasting what felt like hours. We spoke little as we quietly observed the painted sky accompanied by the faint howls of wolves in the distance. It was a hauntingly beautiful way to fall asleep.

Our final day on the river was the most challenging. The water changed from dead eddies to small but quick rapids, with plenty of rain too. Jim profoundly recalled, ‘When you look over 40 years of trips, we have had a lot of wonderful times and hard times – but the hard times were wonderful times.’ It was a sentiment I understood in full. Knowing our time in this beautiful place was coming to an end, I smiled to my friends and said, ‘I’m wet, tired, hungry, and there’s no other place I’d rather be.’

Jim and Tip would continue another eight days on the river, but we’d reached Lake Matcharak, where our pilot was scheduled to pick us up the next day. The continuing rain and low-lying clouds suggested long delays, but only a few hours from portaging our gear to the lakeside, the Beaver swooped in for a water landing. Hastily, we loaded up our gear and said our goodbyes. Even the loud roar of the propeller during takeoff couldn’t drown out the rush of emotions as we lifted through the rain, watching the two friends shrink in the vast wilderness of the Brooks Range. Tip’s words echoed in my mind, ‘I have so many things I want to do, it would take another whole lifetime to do them.’ 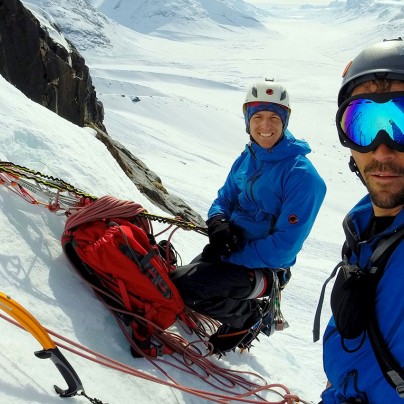 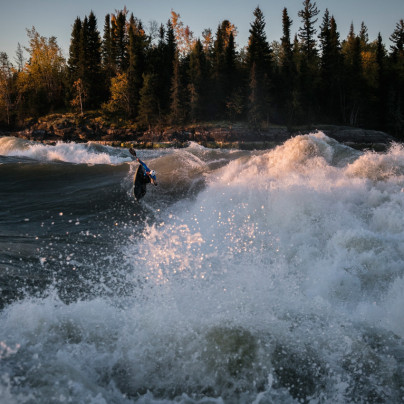