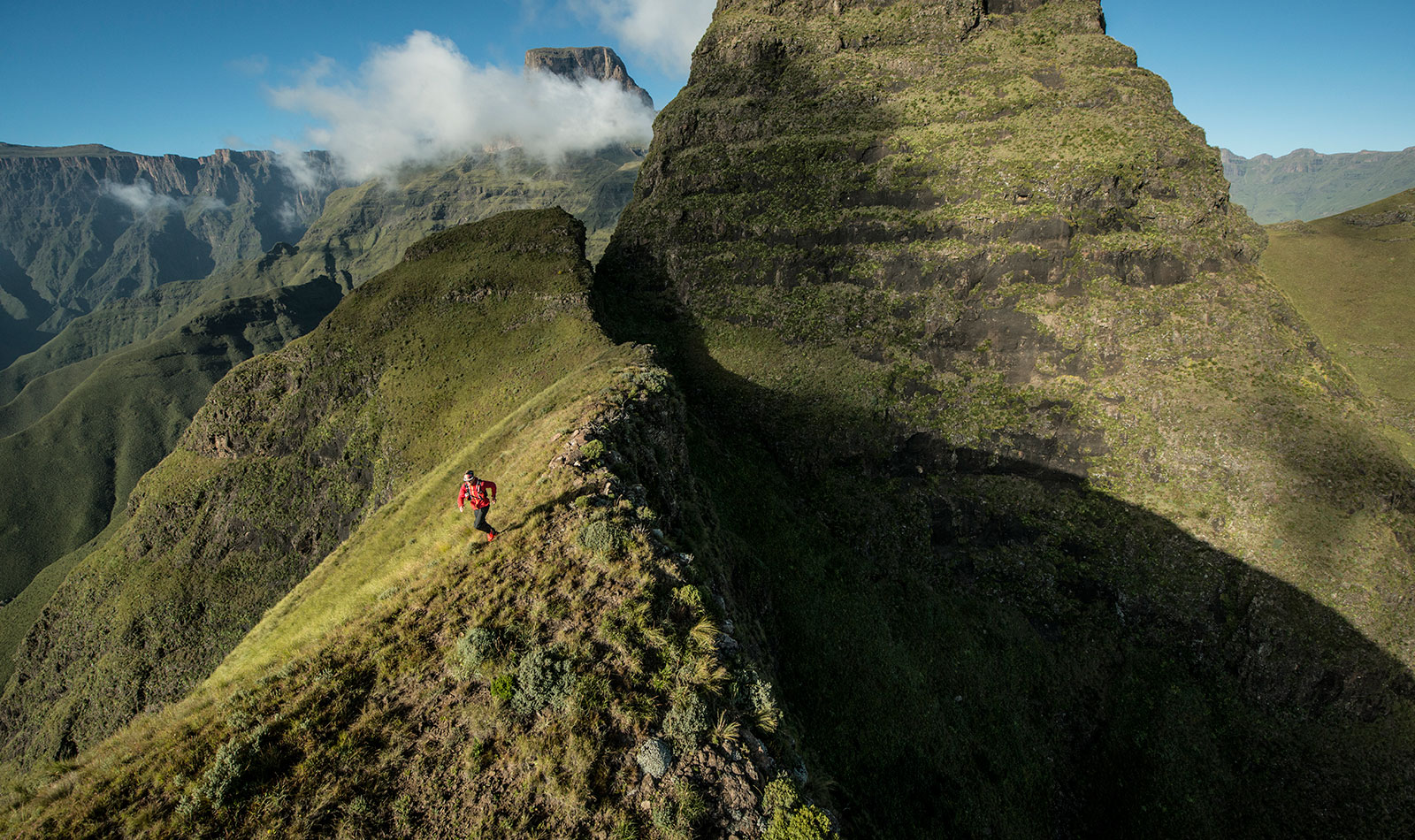 I can’t remember who it was, but around five years ago a person told me that I should try the Drakensberg Grande Traverse. I looked at them and – to be honest – thought they were completely crazy. Attempting to trail-run an unmarked route of approximately 220km through one of South Africa’s harshest and most rugged mountain ranges seemed at best foolish, and at worst, utterly dangerous and unachievable. But formidable as the traverse stood, there lay a challenge within the madness of those mountains to test myself physically and mentally and see what I could achieve.

At the very outset, the Drakensberg Traverse never appealed to me. I always saw those mountains as quite foreign, because they’re in northern South Africa and I’m from Cape Town. I’d never spent any time up in the range and from far off, it seemed intimidating and very wild. But as my trail-running career progressed I started chatting with Ryno Griesel about the infamous route through the mountains, and the seeds of a plan began to grow. The legends of the Drakensberg Traverse were born nearly twenty years ago. The Raubenheimer Brothers were the first to ‘officially’ do hike it, over 105 hours, or four and half days. Then, what began with a traditional hiking mindset soon progressed, with guys attempting to speed trek the traverse, followed later by a few adventure races. Ryno and I kept talking and we developed plans for our own attempt at the route. We looked at the Drak differently – from a purely running point of view – to see just how light, how fast and how far we could actually go.

The hardest part of the preparation for the run was the results from the initial reconnaissance. The Drak is something you have to do completely self-supported. There are no paths, nor trails. The rules are that you have to start at the Sentinel Car Park and finish at Bushman’s Nek, the border post. There are six significant peaks that you have to reach along the way without any aid or food-caches. These peaks are all over 3200m, all steep and all high; the tallest one being over 3,400m. There was no way I could attempt a route like this on my own – it was just too wild out there. From very early on, it became clear that Ryno and I would both have to work together if we were to stand a chance of pacing through the entire distance without serious incident.

Even then, from the moment we set foot in the Drakensberg she went out of her way to show us her fangs. We got caught out in a bad storm on the very first recce. Normally in October the weather is supposed to be calm and quite pleasant – so we were taken by complete surprise when a calamitous front ploughed straight into us. I hadn’t expected to be in the middle of a snowstorm and then, a few hours later, in stinging hail and thunder. The brutality of the storm made me think a lot about the feasibility of a full attempt. I came out of that first foray pretty scared, having realised how far removed we would be from rescue – completely at the mercy of the elements. In the Drakensberg all four seasons sometimes arrive in one day. But we would have little gear, no sleeping bags, no tents – just enough to survive what she could throw at us, if we ran fast enough.

Attempting to trail-run an unmarked route of approximately 220km through one of South Africa’s harshest and most rugged mountain ranges seemed at best foolish, and at worst, utterly dangerous and unachievable. 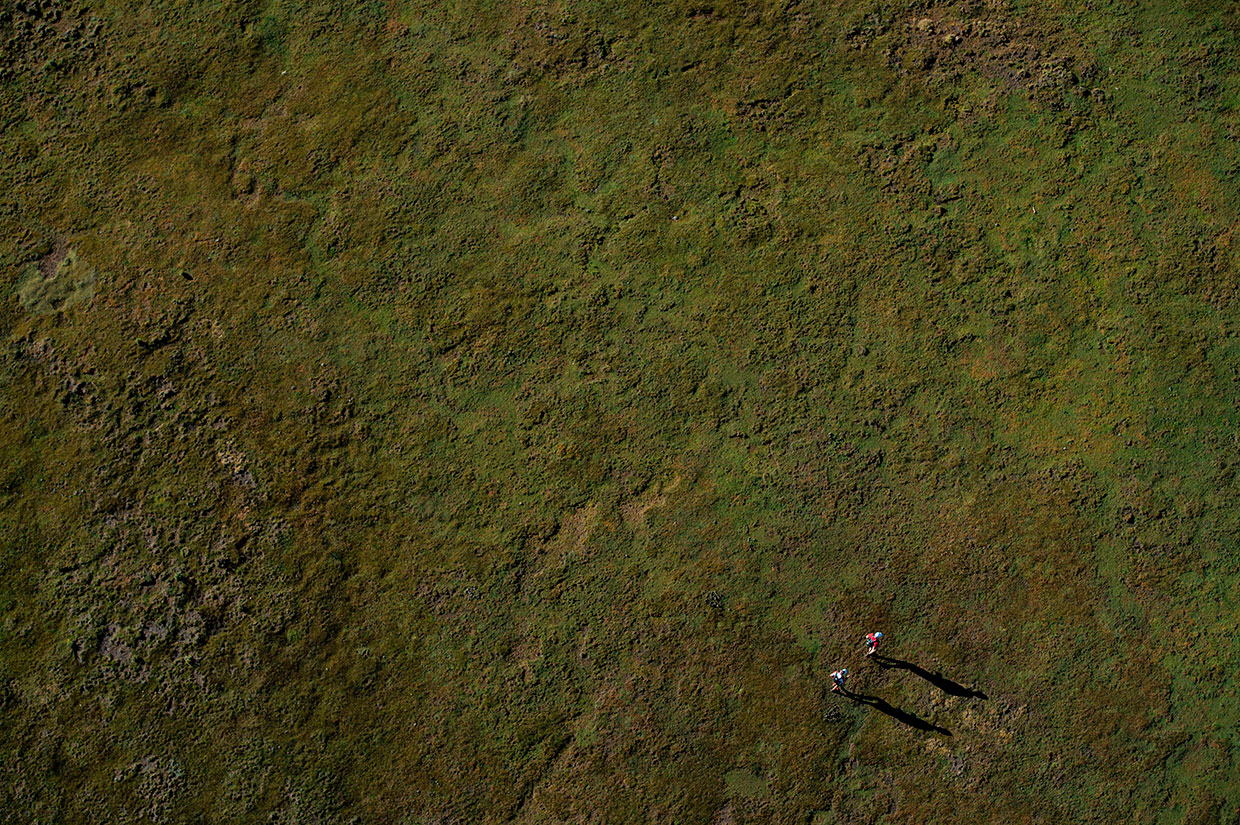 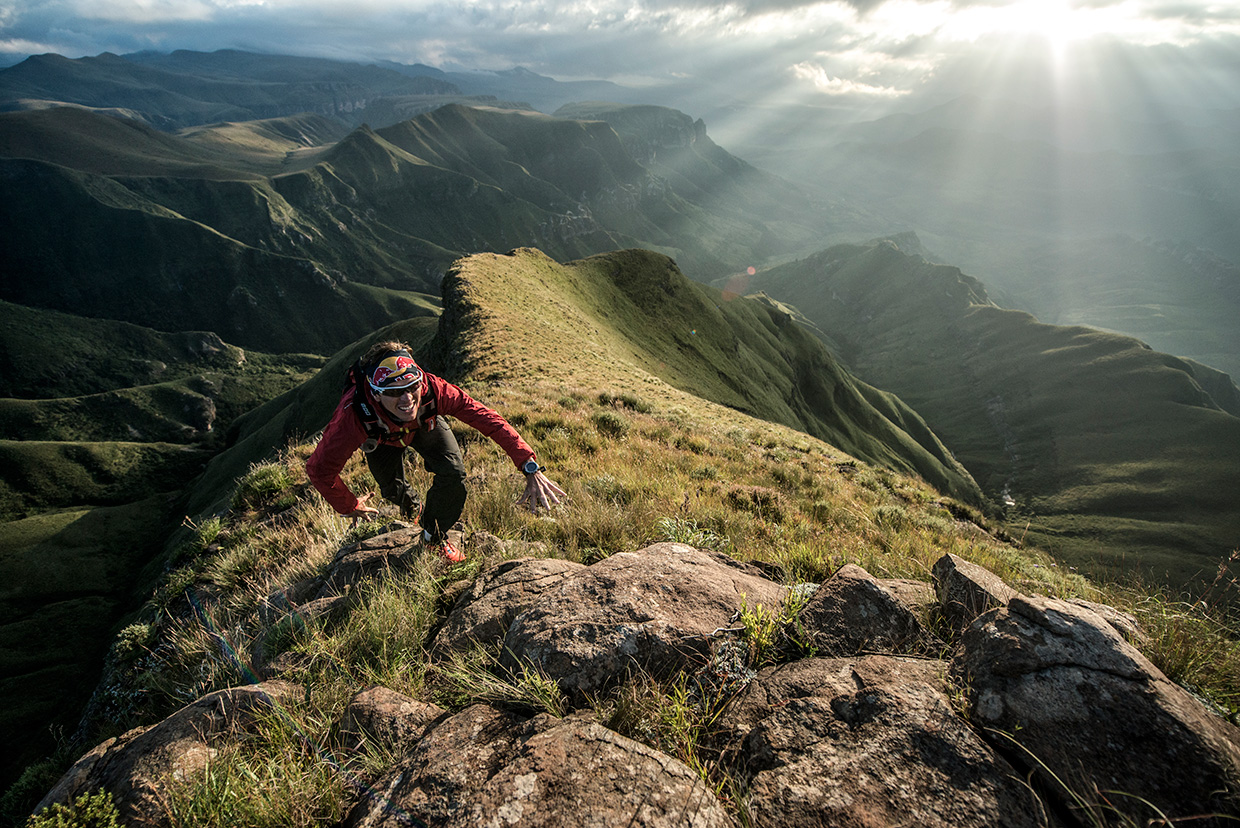 I went into the main attempt apprehensive. I rolled an ankle twice in the first three hours and then took a nasty tumble and gashed my hand open. Perhaps it wasn’t fear exactly that I was feeling, more a severe and humbling deference for the mountains that surrounded us. If you come into trouble then you’re really on your own out there. Even if you’re running, it will take about 10 to 15 hours to get off some of the remoter mountain escarpments. Also, what makes it tricky – and what I found difficult to cope with – is that there’s very little easily runnable terrain. There’s no free step in the Drakensberg – everything takes its toll. Nothing comes without its price.

I was expecting to suffer physically, which obviously we did to quite an extent, but I wasn’t finding the running as bad as I’d initially dreaded. We were really lucky and the weather was keeping good. No, the hardest part to contend with was the mental obstacles we had to overcome, especially the sleep depravation.

Yet, doing the actual attempt with someone such as Ryno, who’s so passionate about the mountains, really helped. I hadn’t known him that well until we decided to do the run together, but we got on superbly with one another and his navigation skills were phenomenal. He was in charge of all the map work, which was a critical component if we hoped for a quick time. There were some guys who made an attempt on the trail about a month prior to us and – with about four kilometres left to go before the finish – made a navigational error. They became caught between two ridges and had to spend an extra night out on the mountain. Those little mistake are so easy to make and, at night with few features to navigate from, can soon stack up until you have a big problem on your hands. But I was running with Ryno and I had absolute faith in him. It was well placed; he never made a single error.

With the Drakensberg having no paths and trails, the running was really difficult. I found it almost like I was moving in slow motion. Our average pace was just five kilometres an hour. By contrast, when you’re doing a trail race, I’m normally settling somewhere between 10-15km/ph depending on how good the trail surface is. Perversely, it was more of a battle to go deliberately slowly as I’m so used to moving quickly. The thick feeling of immobility was mind-numbing at times, as the scenery started to blend together. We kept moving over monotonous rolling hills and valleys that were all the same. Those moments were tough to handle.

I was expecting to suffer physically, which obviously we did to quite an extent, but I wasn’t finding the running as bad as I’d initially dreaded. We were really lucky and the weather was keeping good. No, the hardest part to contend with was the mental obstacles we had to overcome, especially the sleep depravation. Ryno and I only stopped for 40 minutes over the course of our 41 hours of running. Of those 40 minutes, I only slept for ten. The first time around, we were supposed to have a thirty minute power-nap but I couldn’t sleep. I just lay there, cold, shivering, awake. So that didn’t work for me, but then I got so fatigued about two or three hours later I just told Ryno that I had to stop and sleep and dropped to the ground then and there – passing out immediately. I woke up about seven or eight minutes later, still shaking with the cold. But that was enough rest to get me through to the next morning, luckily. 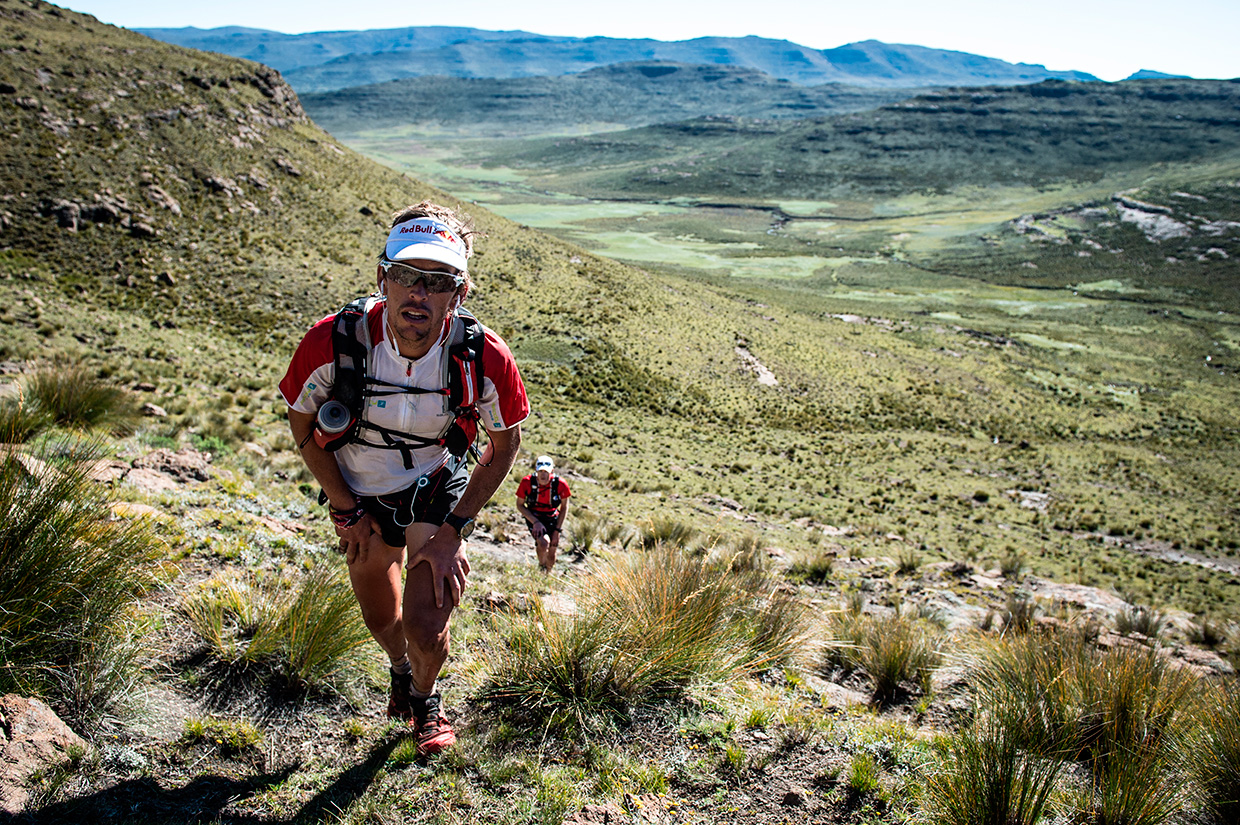 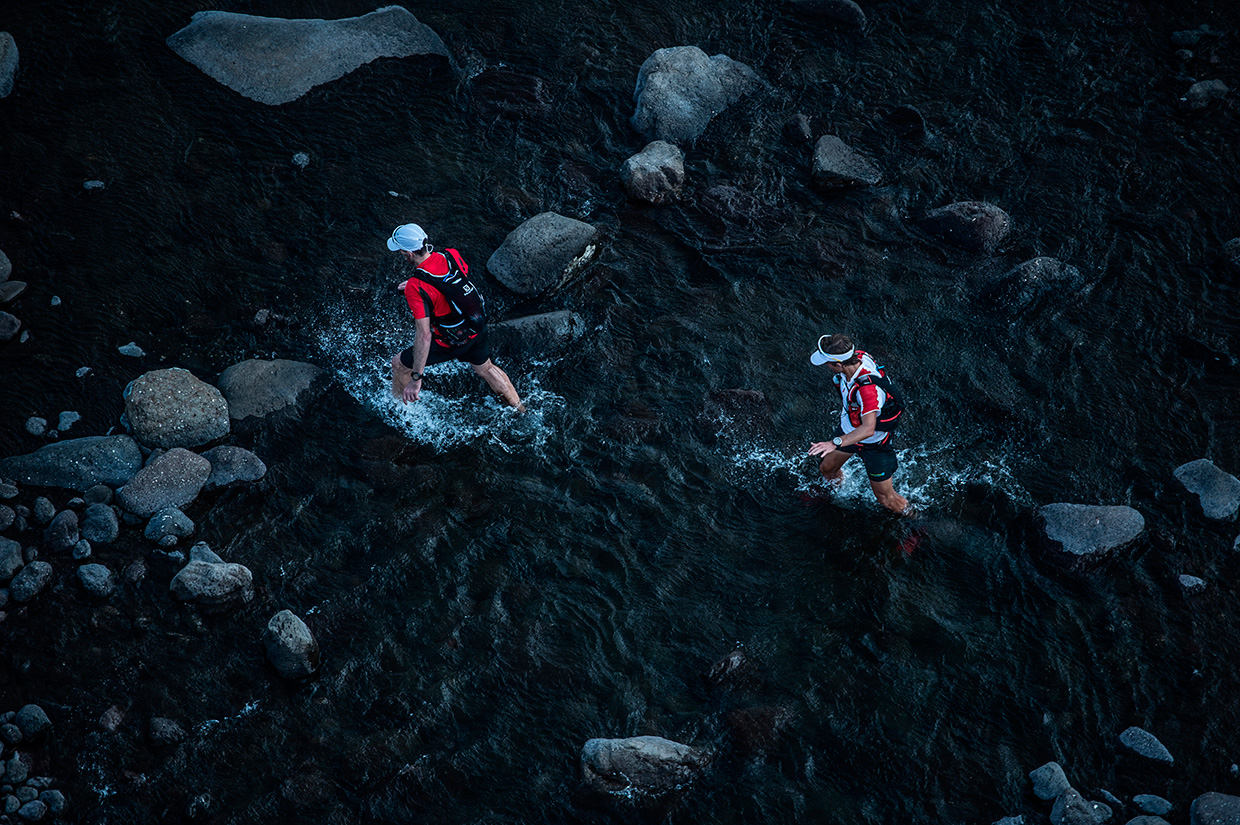 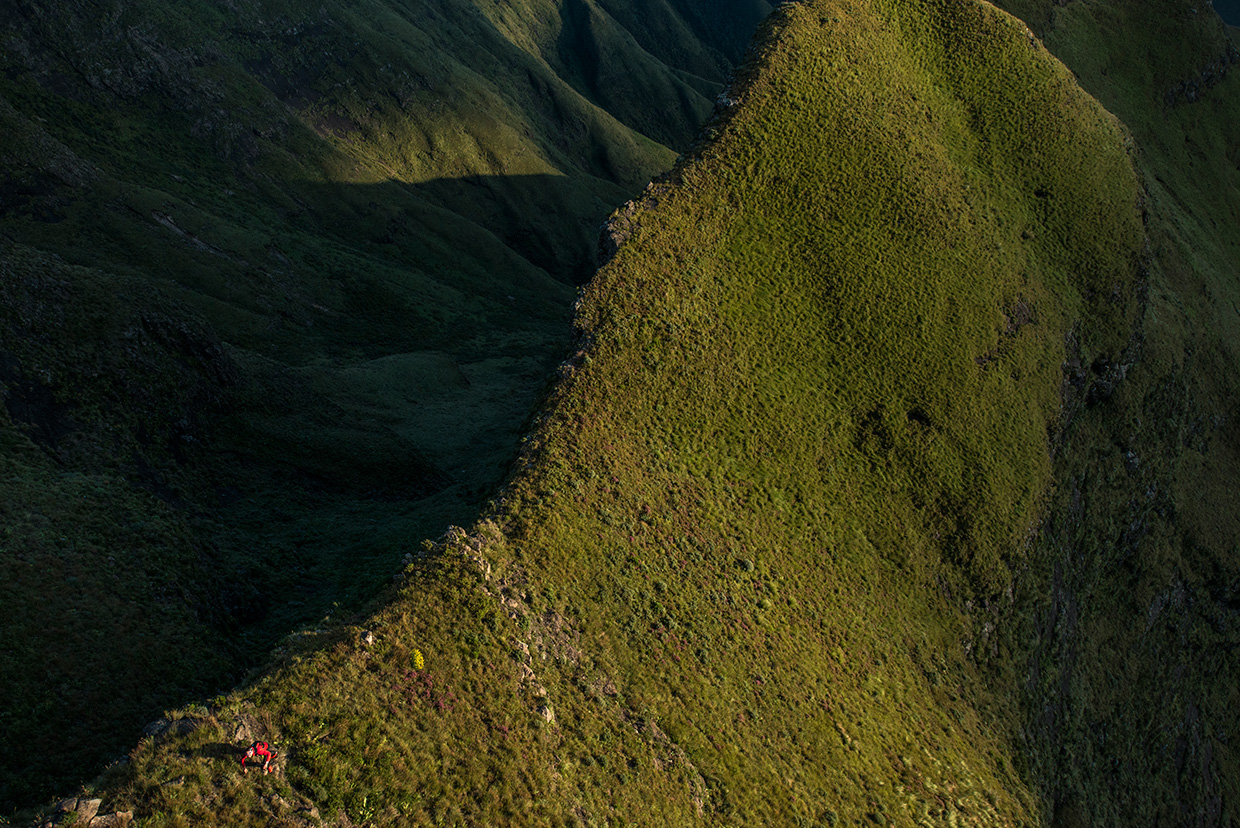 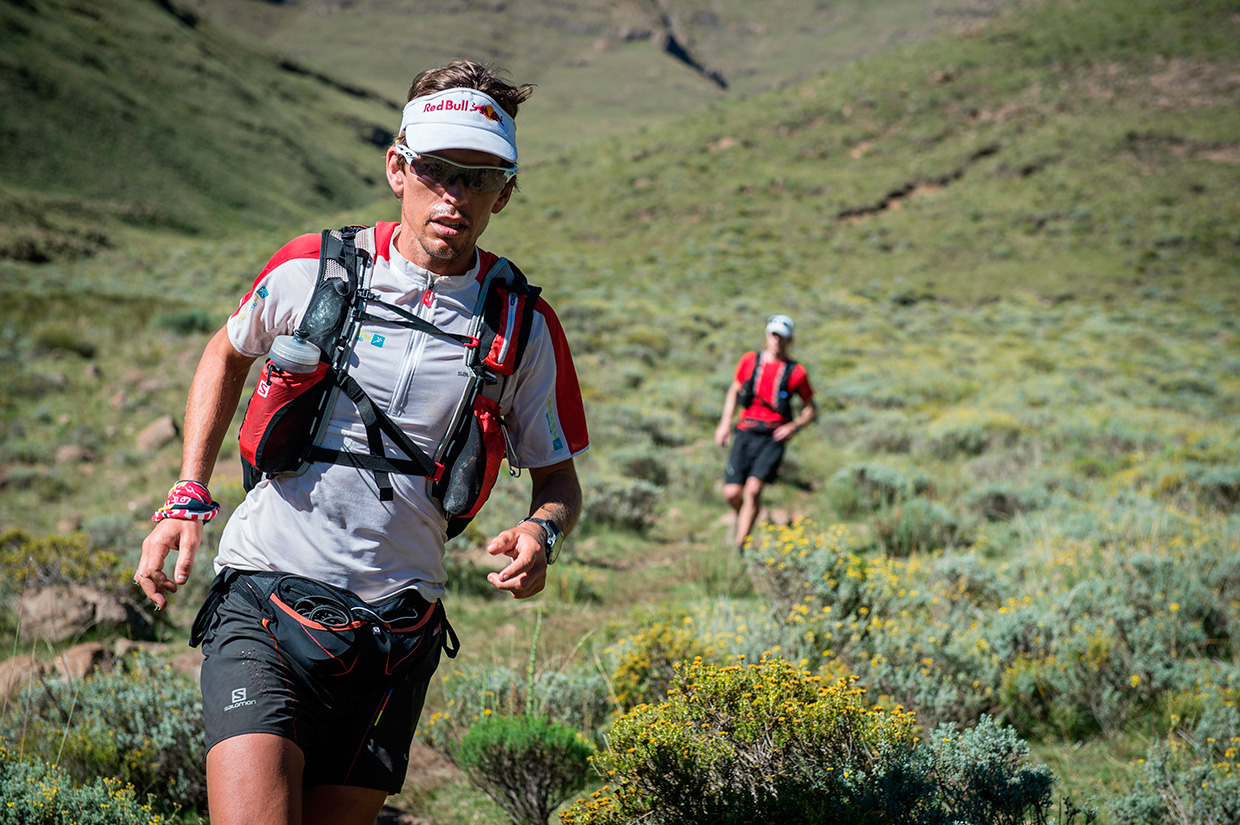 On the second night, I saw a helicopter circling above us, the sound of its rotor blades thumping overhead in the inky blackness. But there were no helicopters out at that time – I was beginning to see and hear things that didn’t exist. That moment, along with the dragging hours before dawn, were the worst parts of the entire run. Thankfully my feet were fine until the last few miles, but then they too fell apart, swelling and blistering. As we dropped down a pass for the final five kilometres I saw the border post – the end, so close, and yet so very far away. The commonsense that had slowed my pace on the constantly rugged terrain disappeared as the end came in to sight. But the fear still remained until the very last moment, skidding on scree, boulder-hopping; taking more and more risks. With tired legs and tired bodies something disastrous could have happened with the slightest of slips, and so it was with a feeling of core-shaking relief – not excitement – that Ryno and I finally crossed the finish.

When I enter a race, I always know – barring injury or something going really wrong – that I’ll complete it. But with the Drakensberg Traverse, in all honesty, I wasn’t sure that I had the mental and physical fortitude to pull it off. A lot of great athletes and trail runners have attempted that trail in the past before getting stuck, moving too slowly and finally pulling the plug. For me, I always knew the run was probably going to be a battle primarily fought inside my head rather than through my feet, and ultimately I was so happy that everything went the way it did in the end. But the elation only really kicked in a day after we’d finished, once the realisation came that we’d really completed it.

It was in that delayed moment I realised that – for both Ryno and I – the attempt had never really been about breaking a record. The Drakensberg Mountains are so iconic, so foreboding and prominent that the biggest achievement came from being able to traverse them from the top to the bottom. In twenty or thirty or forty years’ time the deep sense of pride I feel won’t stem from the number of hours we traversed it in, but that we ran every step of the way through those great and terrible mountains.

Photography: The Red Bull Content Pool and is copyright Red Bull and the respective photographers

Lights of Heaven The Makeshift Mountaineer 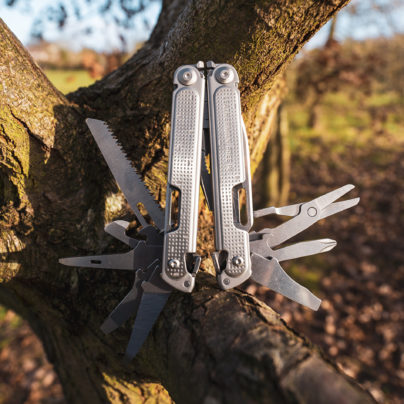 Free Thinkers Stories behind the gear – The Leatherman FREE™ Series 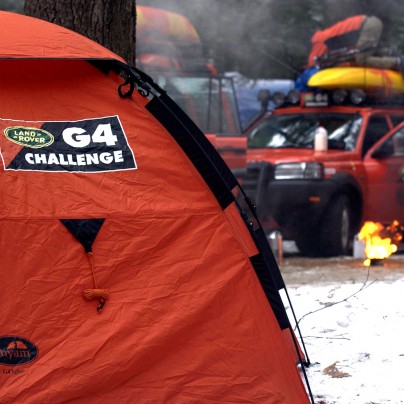