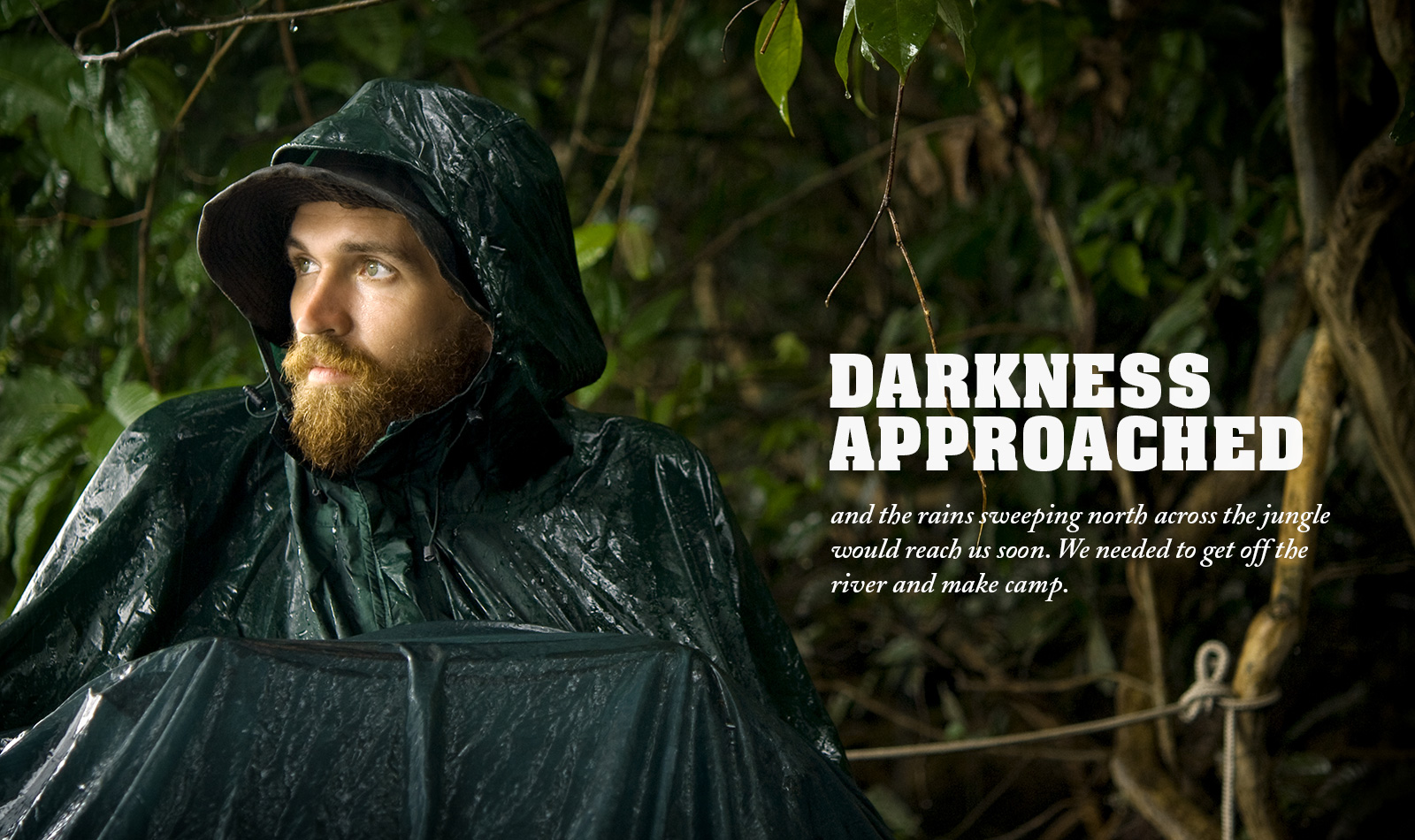 I reached back and took the affectionately named machete from Aaron as he steered our canoe towards the thick jungle wall of the riverbank. “I’ll bring us in slowly” he said. I crouched up front armed with Lucille, ready to cut an entrance into the dark green tangle. I didn’t like this part of our daily routine, all kinds of things hid in the overhanging vegetation. With a thrust of his paddle Aaron sent me face first into the creepers; I looked behind to see him laughing through his beard as I twitched and shook myself off.

Eventually we cleared an exit from the river and clambered on to the bank. A brown snake darted away, the usual infinity of ants and mosquitoes descended and a troop of little monkeys with white faces and golden paws rattled branches then fled. The strong ammonia smell of jaguar spray hit us and we saw the big cat paw prints in the mud. It was too late to find another place to camp and, anyway, with its extensive roaming radius and ability to swim across rivers, the jaguar could not be outmanoeuvred. Whilst the ‘onça-pintada’ is rarely known to attack humans, that night we slept in shifts, one of us always awake to keep the damp fire burning as bright as possible, machete and flashlight in hand, staring out into a universe of glowing lichens and insects that blinked neon through the Amazonian night.

The two of us were alone in a vast expanse of rainforest with no sign of human life, no indigenous villages, no trails, no litter, no aeroplanes above. It had been this way for weeks. We were paddling up the Rio Amapari, heading deep into the remote Tumucumaque region on Brazil’s frontier with French Guyana. The maps we had found of the area were useless and had ‘relief data incomplete’ stamped all over them, although this did not trouble us too much – we had no set destination, and following the river back downstream would eventually lead us out. We were seeking isolation and a chance to drift alone for a while inside this equatorial wilderness. A portable Norwegian Ally canoe that collapsed into a 25kg backpack gave us this freedom.

We had no set destination, and following the river back downstream would eventually lead us out. We were seeking isolation and a chance to drift alone for a while inside this equatorial wilderness. 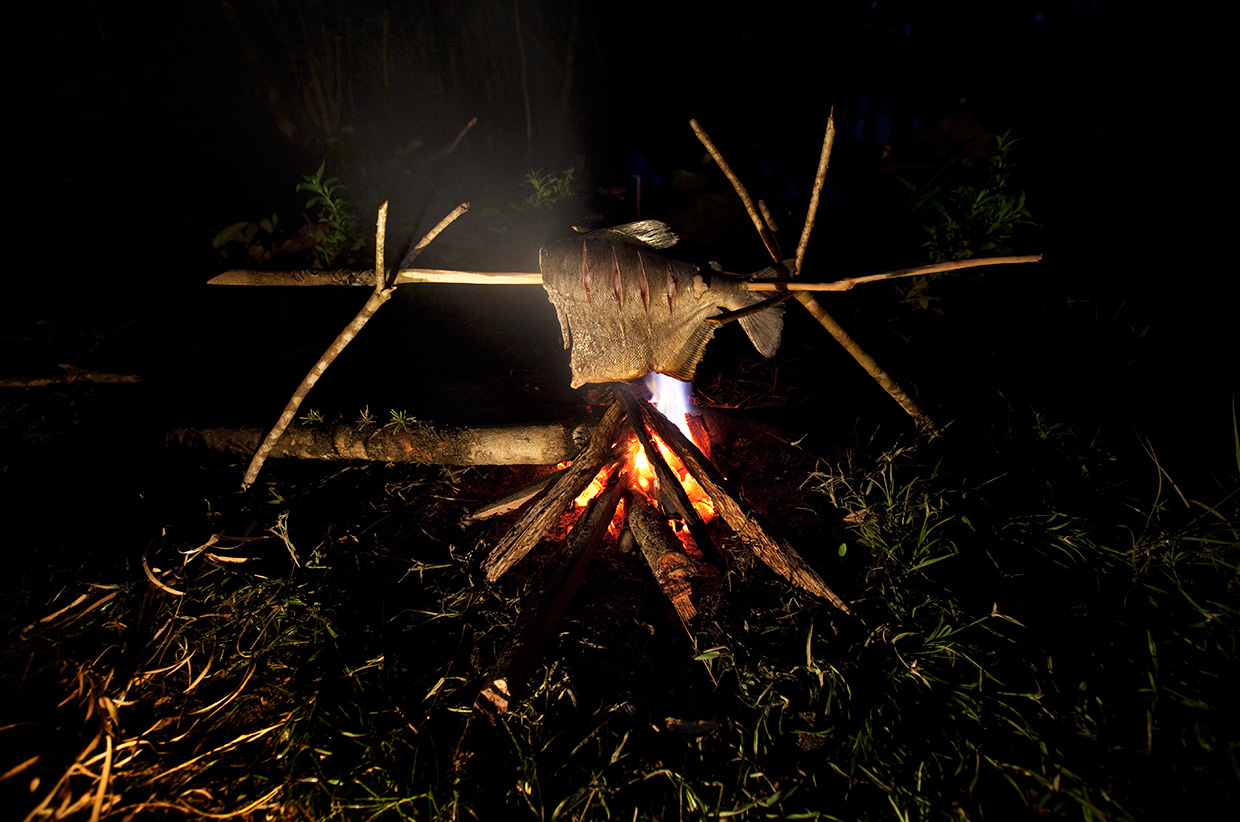 We learnt a lot from them; how to fish, how to survive, how to identify the evening cry of a jaguar and its scent. They wondered why we wanted to go all that way upriver, as not even the region’s Waiãpi indians roamed there. It sounded perfect. We said our goodbyes and disappeared into the Tumucumaque.

Our last human encounter on the way into the Tumucumque had been with a trio of leather-faced ‘caboclos’; Amazonian river folk descended from a mix of indigenous, African and Portuguese Brazilians. They were camped two days paddle upstream from Sete Ilhas, the last village we had passed, and invited us to spend some time with them and get better acquainted with the jungle. The eldest was a gentle character but with a feral look in his eyes; he spoke rarely and did so only in low muffled whispers. Everything he owned he carried in an old sack – improvised fishing tackle, some rusty tools, a homemade Mad Max style head torch which ran off a large corroded battery strapped to his chest. He lived between a few scattered jungle camps, with these companions joining him from time to time, bringing him supplies. Whilst the rest of us talked around the fire, he would paddle his small dugout canoe off into the night to check his fish traps, returning later to clean the catch and leave a pot of piranha or catfish stewing on the embers overnight. This peaceful man was a troubled sleeper, tossing violently and shouting his way through nightmares. His name was Crispinho, an old miner who had been up there since the day his wife ditched him for his best friend, 15 years ago.

We learnt a lot from them; how to fish, how to survive, how to identify the evening cry of a jaguar and its scent. They wondered why we wanted to go all that way upriver, as not even the region’s Waiãpi indians roamed there. It sounded perfect. We said our goodbyes and disappeared into the Tumucumaque.

Colossal tree citadels lined the banks, every inch filled with life and exotic foliage. Bright blue butterflies followed us as we snaked through the Amapari’s endless meanders, our paddles often spooking the giant turquoise iguanas sunning themselves on overhanging branches, causing them to leap from great heights into the river. At dusk peculiar birdsong would ping from tree to tree across the forest, slowly giving way to the low roar of guaribá howler monkeys and a prehistoric orchestra of insects and frogs that had played uninterrupted for thousands of years.

We had spent weeks cramped together in a canoe by day or in a machete-hacked jungle clearing by night. In such an isolated jungle region, we had to work together. But it wasn’t always easy. Cutting a trail for a portage when a small creek had become too overgrown to paddle, I heard Aaron’s calm Californian voice through the undergrowth.

I thought maybe he’d forgotten his tobacco on a rock somewhere, ‘come on man what’s going on? Let’s do this’ 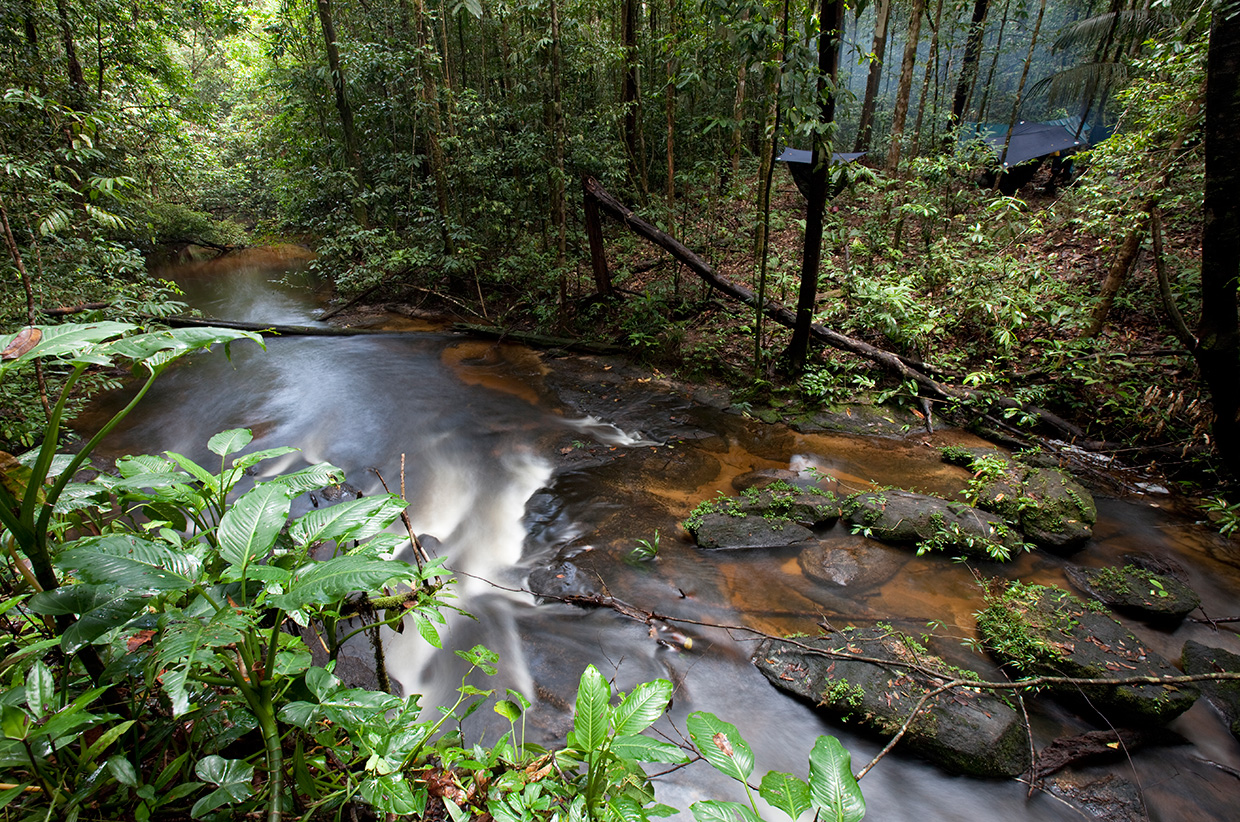 By the time I got back to him, he was white as a sheet and bleeding everywhere. With an unlucky slip Aaron had struck himself across the bridge of his bare foot with a freshly sharpened machete, Lucille. A handkerchief and a couple of shirts later, we eventually stopped the bleeding from the deep cut and were just about able to hold it together with butterfly stitches. We halted our push up river. The next two weeks were a challenge with Aaron frustrated and confined to his hammock doing his best to allow the open wound to heal up a little and stay infection free. The fear of ending our journey this early troubled both our minds and the tranquillity of the jungle was washed away by a growing friction between us.

One afternoon Aaron sealed his foot in a bag and we took the canoe out to fish for dinner. We both kept losing our line and hooks to piranha and snags. In the midst of my frustration, I somehow convinced myself Aaron was responsible. For the first time in our long friendship all hell broke loose. The howler monkeys and toucans were drowned out by our cursing. We angrily paddled back to camp, but without any coordinated paddling technique we just went around in circles. Just then, a pair of blue and yellow macaws flew across the river. It hit us both at the same second, “look at where we are!” We burst out laughing, made our way back to our little camp, brewed up some river water coffee and imagined the mysteries that lay upriver. Fortunately, Aaron’s foot soon improved and the weeks that followed in the Tumucumaque stand as amongst the most memorable in our lives.

Recently granted national park status, it seemed like the Tumucumaque would be safe from chainsaws, cattle ranchers and soya plantations for a little longer. Our worst fears were no longer of jaguars and jungle hostilities, but for the future of the Amazon’s remaining wilderness. The current situation is lamentable. The Brazilian forestry code is being compromised by politicians with links to large scale agrarian businesses. In these frontier lands these notorious ‘ruralistas’ can act with general impunity and environmental activists are frequently murdered.

In the end we never made it quite as far as the Amapari’s mountain headwaters, as time and supplies ran short, and the moment came when we were both ready to turn around and let the flow of the Amapari deliver us back to the world we had come from. No longer going against the current, we covered a good distance each day. When the high jungle began to give way to açai palm groves we put down our paddles and floated for a while with our eyes closed. We opened them to the sight of a snake gliding across the river just in front of us. Soon, stilted huts appeared. We had returned.

Gareth Jones and Aaron Chervenak are two old friends with a love of jungle exploration. Their journey in the Amazon basin is profiled in a short film called ‘South at the 28th Spring’

Gareth is a Fellow of the Royal Geographical Society and has spent several years living in Brazil. Aaron is a photographer and filmmaker based in Southern California. They are currently planning a new South American expedition together.

The Skeeto Lounge is both the name of their canoe and their photography and film collaboration. You can find out more at www.skeetolounge.com or follow them on Facebook & Twitter.