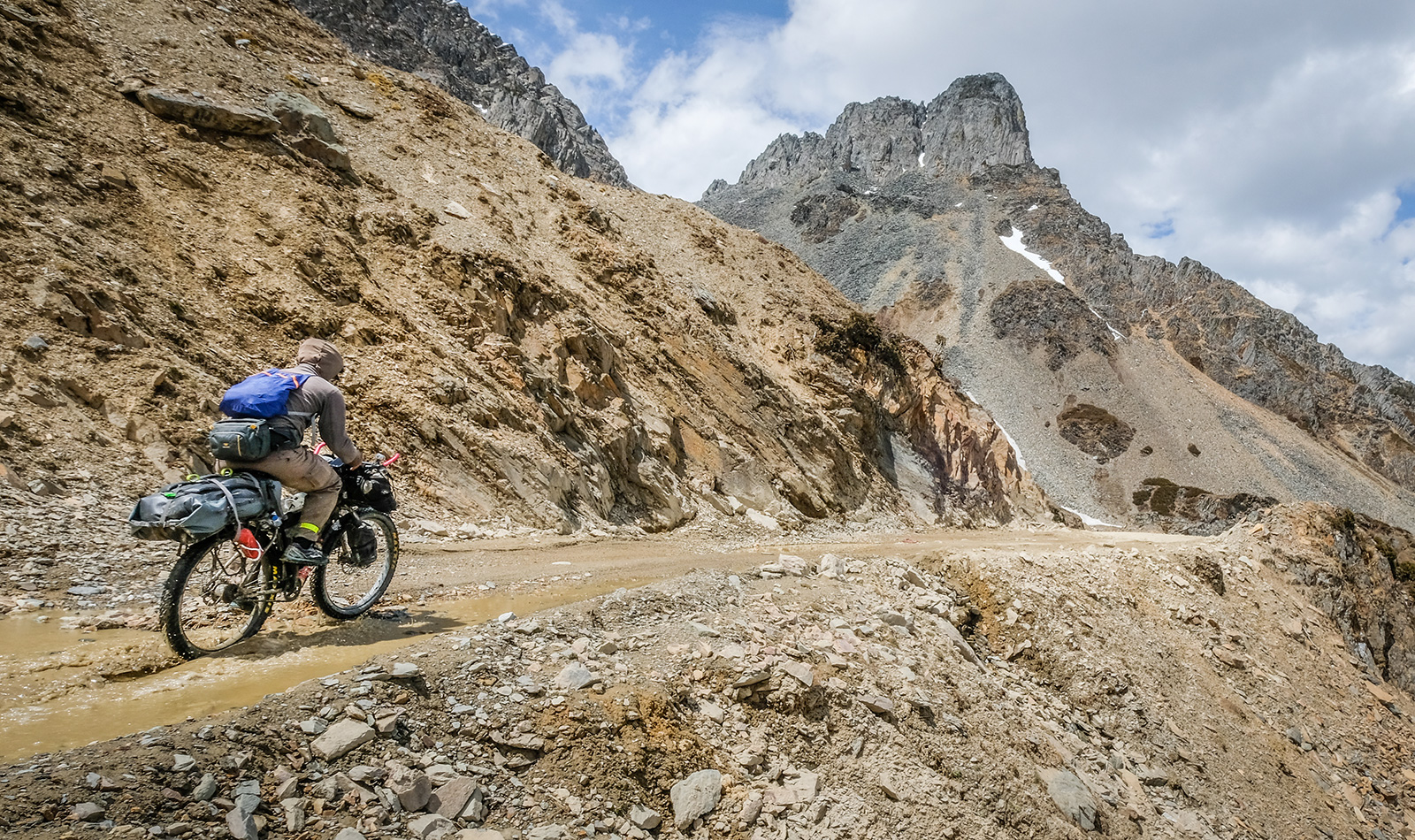 ‘Mate, nobody goes bikepacking in China.’

‘Because there’s no dirt.’

This was the wisdom I received before I left for the mountains of Yunnan Province and headed into the vast hinterland of the Middle Country. A great empire builds great roads, and by this measure China is great, even in this remote corner, far closer to Burma than Beijing. Pick a road that shows as dirt on satellite imagery from last year and more likely than not it’s now been paved; pick an area with no roads and there’s probably now one running through it.

It’s often said that China is the world’s biggest construction site. Flying in to Yunnan’s capital city of Kunming, I see the outskirts bristling with cranes, dozens of half-finished tower blocks rising like trunks in a vast petrified forest. Riding out of the UNESCO World Heritage town of Shuhe a week later, the road north towards Jade Dragon Snow Mountain – that grey-white, storm-swirled granite pinnacle – is bordered by stacked culverts and heavy equipment. Everything on Earth is to be improved: 4.2 million kilometres of road and counting, now the largest network on the planet.

Yet for all the endless, unfortunate improvements wrought by contemporary China on its environment, it remains a uniquely rewarding place to cycle, its landscapes huge beyond reckoning. It’s undiscovered by the biking masses and difficult in both language and culture. China is a place where you can ride for a month and never see another tourist – which had made me all the more curious about the so-called ‘Secret Road’.

‘The Chinese I talked to told me it was impossible on a bicycle, told me not to do it in fact,’ Australian transcontinental cyclist Matthew Harris had told me, appropriately, in my favourite noodle restaurant in Sydney’s Chinatown just weeks before I set off in April 2017. ‘And yeah,’ he added with a laugh, ‘they were kind of right. It’s not even really built yet. But oh, what a road.’

Yes, that was what I wanted: to be lost in the Middle Country. To experience China, unimproved and wild and away from the curated version of itself it presents to outsiders: China, before the tar…

I begin my ride on the highway north out of Shuhe and onward across a ridge of mountains to the little village of Daju, situated at the far end of the famous Tiger Leaping Gorge. In the village that night, the surrounding mountains still covered by late-winter snow, I sleep in a dark musty room in an empty guesthouse. The village toilets are communal and lack running water and excrement lies on concrete slabs set into the floor. China’s breakneck pace of development is uneven, more focused on its cities and transportation infrastructure than on the living conditions of its 590-million-strong rural population.

I wanted to be lost in the Middle Country. To experience China, unimproved and wild and away from the curated version of itself it presents to outsiders: China, before the tar… 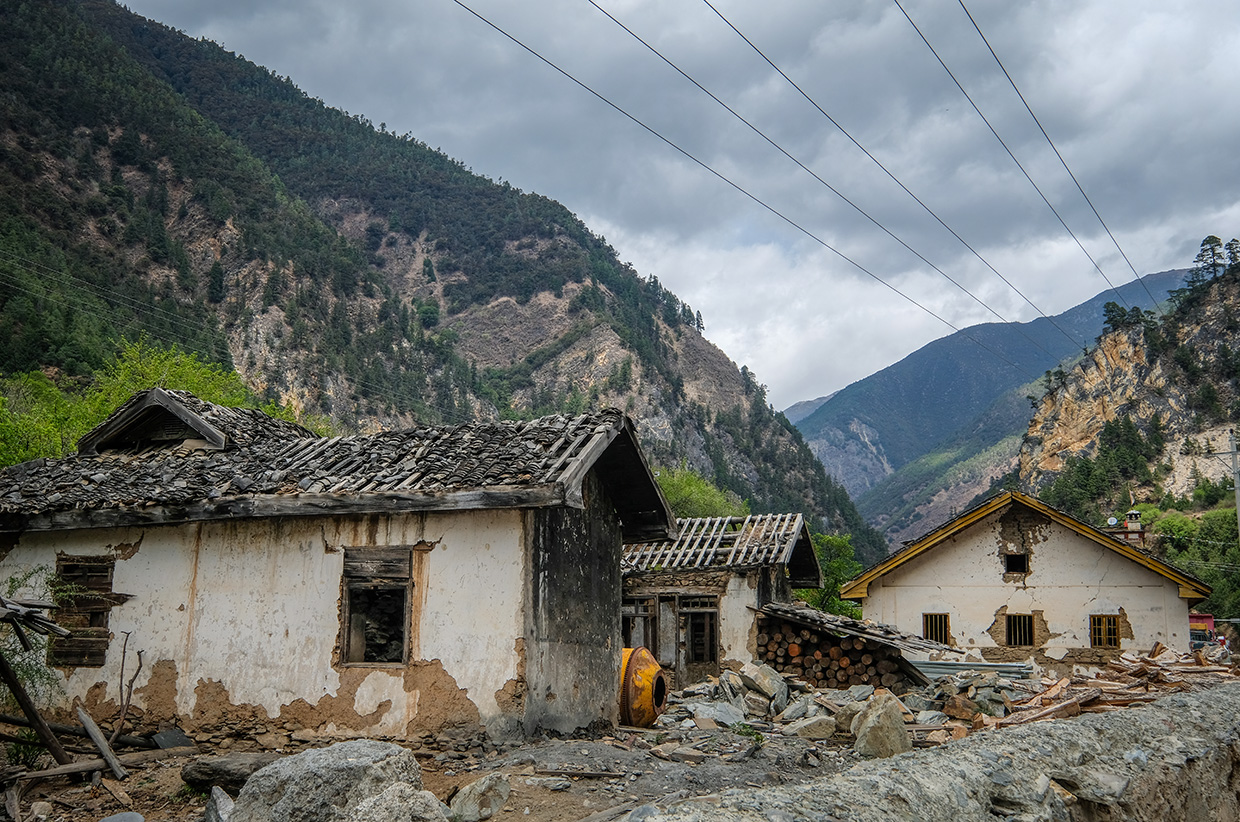 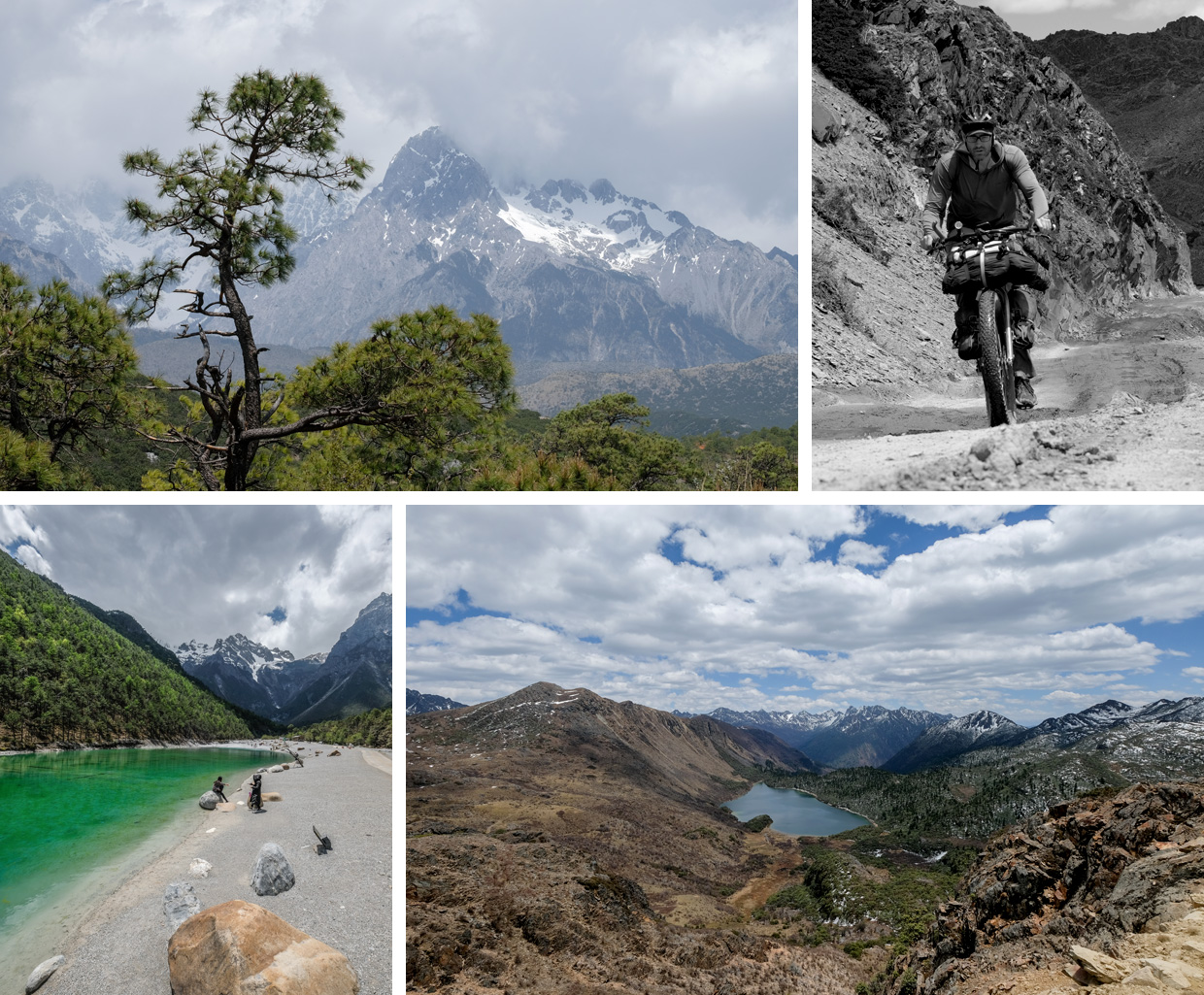 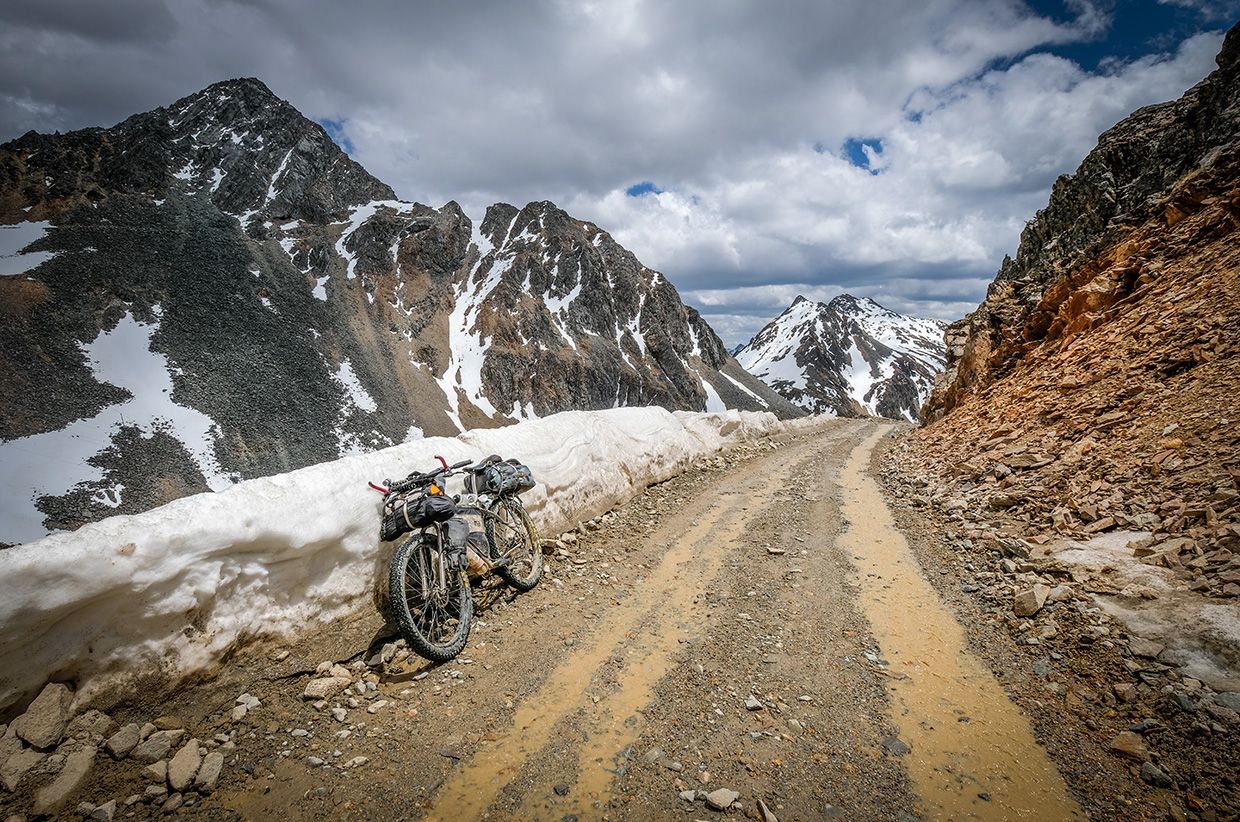 In the morning I roll downhill to the muddy Jinsha River and cross on a rusting ferry-barge, then ride onward into a vast backcountry of tiny villages and green terraced fields carving the hillsides into steps. Men ride horses amidst the yellow-flowering rapeseed and women carry huge bundles of sticks on their backs along the punishing gradients, yet even here the narrow laneways – seen as dirt from space only a year ago – are now flawless poured concrete.

On and on I ride for days. Chapped lips. Windburn. Sunburn. Salt stains through my clothes. Dozens of speeding vehicles fill the smooth tarred roads, and the margins are liberally carpeted with discarded food wrappers and drink cans. I rest for two nights in the tourist city of Shangri-La at the edge of the Hengduan Mountains. The Tibetan old town at its heart is being rapidly rebuilt and expanded, whole blocks of ‘ancient’ buildings being made up out of whole cloth. Watchful police are everywhere.

And then, a morning later, at a nondescript and unmarked bend in the highway 20km north of the city, I turn east along a dusty dirt track running towards a line of scraggly pines climbing the snow-capped mountains in the far distance. The Secret Road.

A clear-running river babbles beside me as I pant and grind and push for hours up past 3,800m. With the road still climbing, the air thin in my lungs and the sun starting to dip below the ridgeline to the west, I look for a place to camp.

The litter and buildings and vehicles drop away, save for the occasional – and puzzling – presence of a heavy truck groaning up steep switchbacks into the obscure distance. A clear-running river babbles beside me as I pant and grind and push for hours up past 3,800m. With the road still climbing, the air thin in my lungs and the sun starting to dip below the ridgeline to the west, I look for a place to camp. Yet something is strange. The earth is heavily scarred here. Fences have appeared beside the roadside and smoke rises in the distance and there’s a deep concussion as I approach, felt as much as heard: blasting.

Around a bend and it emerges, some sort of huge earthworks operation here at 4,000m in the middle of nowhere – heavy machinery and dozens of men in hard hats and an ad-hoc little construction city at its centre. I’m beginning to get an altitude headache and don’t want to climb further, so I politely ask a woman running a tiny roadside shop if I can put my tent up in the yard behind. She responds by yelling at me and gesturing angrily up the trail, and keeps yelling until I’m well away. The storied hospitality of the mountains, in living form.

Ugh. I’m dead in the saddle now and pushing my bike uphill away from the encampment, away from any drunk or ill-intentioned workers who might discover me in the night. I finally find a flat patch well off the track at 4,200m, cook myself one of my countless instant noodle dinners, pitch my tent and – saying hello to a throbbing headache for the next eight hours – curl into my sleeping bag as darkness and cold settle over the valley.

I wake gasping several times during the night as my oxygen-starved brainstem realises that it needs more breath, but in the morning my headache is gone and the sun is out and frost sparkles on everything in the light. I pack, fill my bottles with snowmelt, and ride on above treeline. I can’t stop smiling. This, beyond all the people and the buildings and the tar, is exactly the China I’d dreamed of – the rough dirt road plateauing through a wilderness of mountains, snow piled by the sides of the road and its slopes falling sharply away beside an unprotected drop. 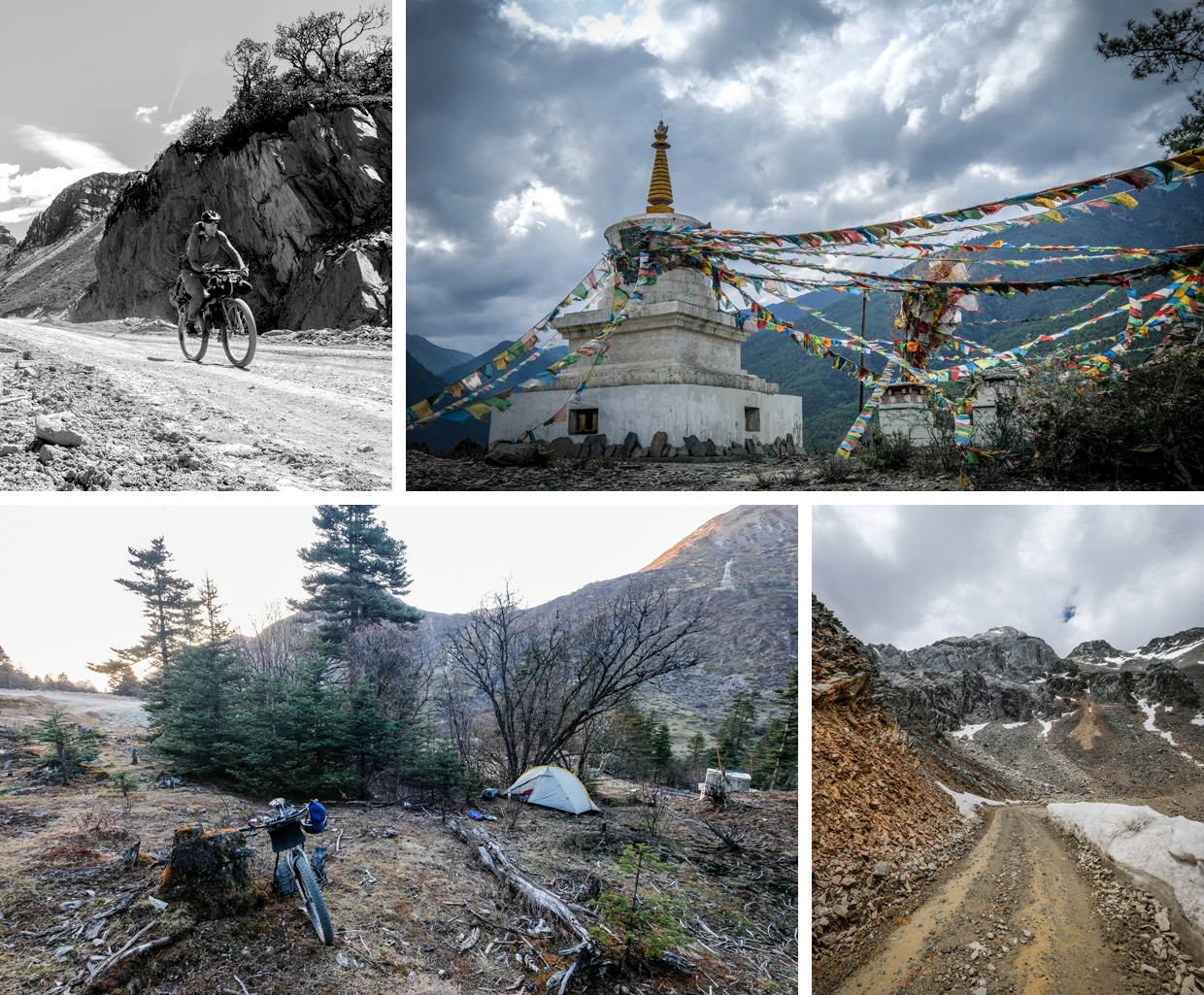 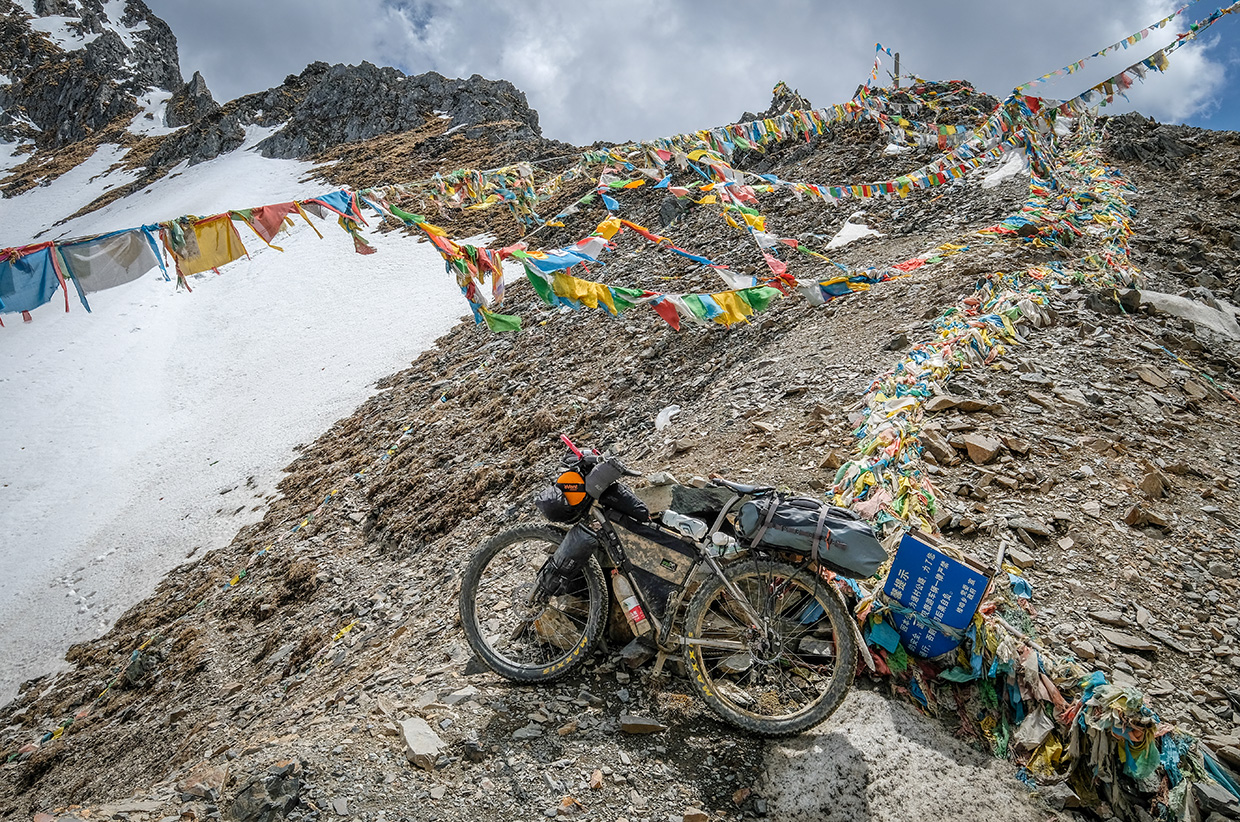 At 4,600m I cross a pass with red-blue-green-white-yellow Tibetan prayer flags fluttering, and 1,000m of rough, rippy, rocky descent open below me like a playground. The Muru Cycles Mungo I’m riding, shod with knobbly high-volume 29+ rubber, is as sure-footed as I could possibly ask for. It ploughs over loose rocks, deep ruts and through rivers of meltwater like a monster truck; but, carrying a full load of camping and cooking gear, the ride is on that fine line between thrilling and terrifying.

This impression is confirmed when the track dips back below treeline, the road more aspirational here than actual as it degenerates into a maze of raw, unfinished construction tracks gouged from the walls of the mountain – little more than giant potholes and head-sized rocks concealed by a 5cm-deep layer of weird, powdery moon dust.

Even at crawling speeds, it’s all I can do to keep my fully rigid bicycle from bucking me off. Somewhere after my fifth navigational dead end (signalled by a row of bulldozers with the company name ‘RONG WEI’, I kid you not, painted on them in huge letters) I finally lose that battle. I’m pitched headlong off the bike and pick myself up, scraped and bleeding but with my body and my bike intact, from the sea of dust. Phew.

In the fading light the construction road-to-be finally dumps me out onto new tarmac in the bottom of a fantastically deep, narrow canyon. Heavy rockfalls and huge tangles of collapsed landslide netting incongruously cover the flawless pavement down to a single lane or less. I ride on through a village in the fading light, chickens and goats scattering across the pavement in my wake, and then onward beside a river in the dusk, exhausted and looking for somewhere – anywhere – to camp.

In the last minutes of twilight I spot a rickety bridge across the river, roll across it onto a muddy new construction track running up a side valley, and roll out my mat hidden behind a crumbling stone wall. In the moonlight I strip to the skin, take a slug of my heinous baiju rice liquor, and bathe in the river, washing the dirt from my cuts and scrapes.

I wake in the dawn to a rumbling, and then a scraping: a bulldozer pushing up the track, scouring away the earth as it grinds up the valley. To China, moving ever onward, ensuring that nowhere remains before the tar for long.

Matthew Crompton is an award-winning writer and photographer preoccupied with bikes, hikes, and the mystical solitude of the way-out. His latest project is a 29+ fat-tyred expedition from the Tibetan Plateau through the mountains of Central Asia. 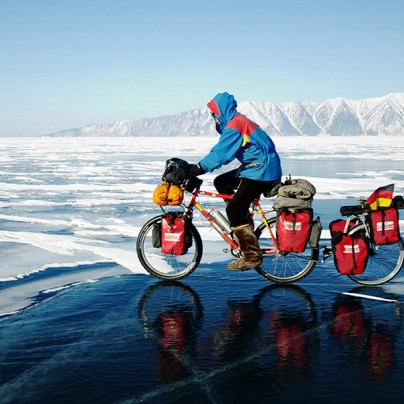 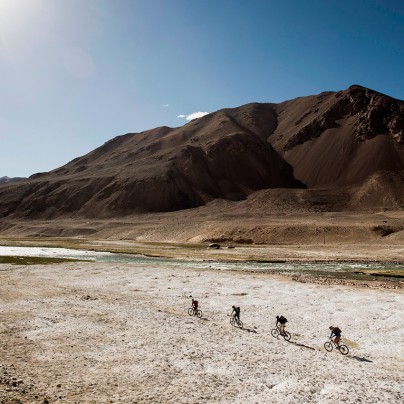 Rivers Run Through It Dan Milner