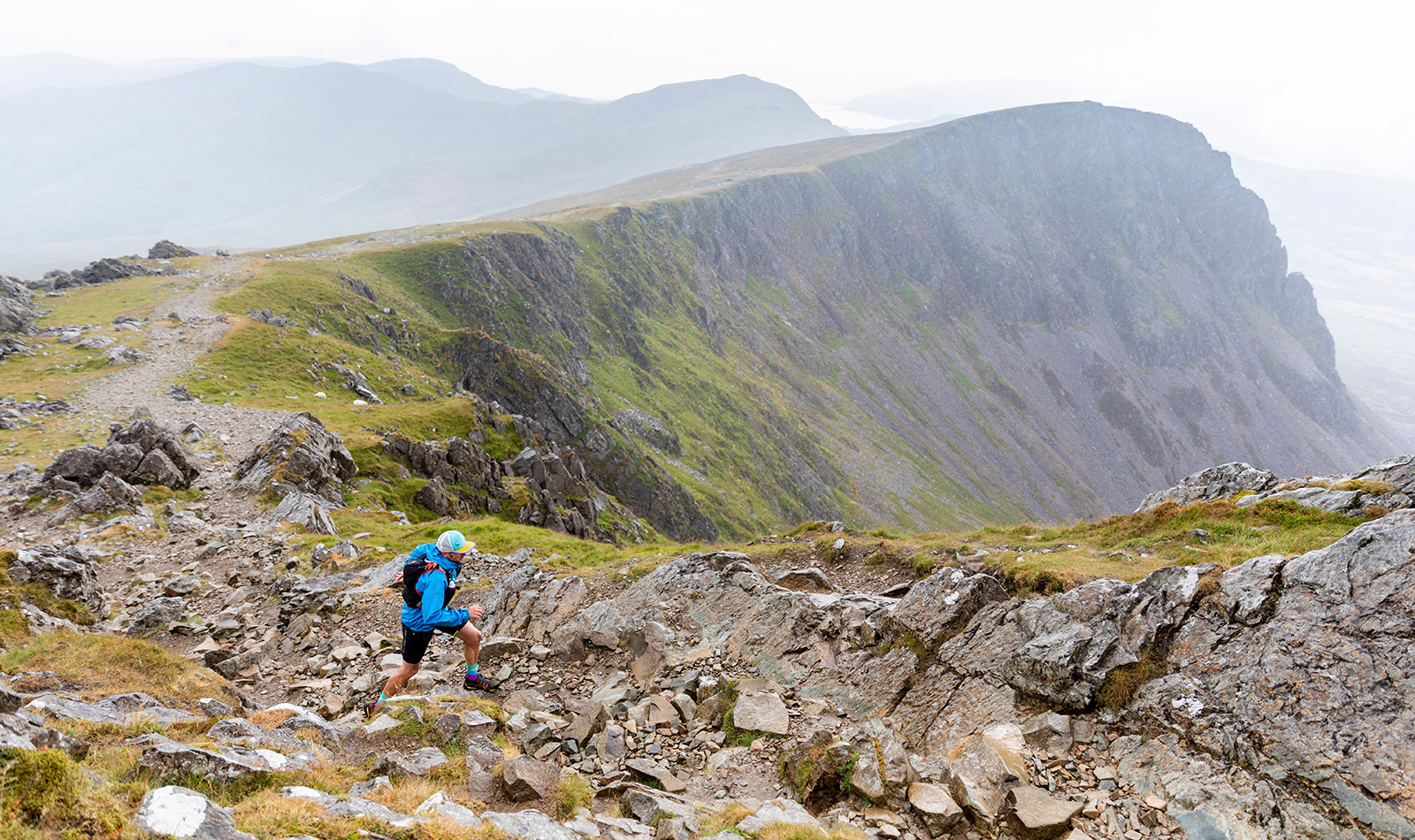 Mountains, the sea, and the human psyche are knitted together by storytelling. These places have inspired tales since before we had the tools to write them down, and they still draw our curiosity. What’s at the top? How far over the horizon is the nearest land? What creatures might live where humans can’t survive?

The mountains and the sea also have a deeper connection. There is a symmetrical beauty in travelling from the point where a mountain meets the sea to its very summit. There are many places in the UK where it’s possible to do this in the same day – sea to summit and back again under your own steam – but given the challenge by Sidetracked and Grangers, I was drawn to Cadair for selfish reasons. I had my own tales of this mighty little Welsh mountain that I wanted to relive, because sometimes the act of retelling them to yourself isn’t enough. You must retread footsteps, revisit vistas with fresh eyes, and reconnect with a place physically.

Cadair Idris stood proud over Dolgellau when we arrived on the scorching final Thursday before school summer holidays. Despite multiple visits, it was the first time I had ever walked through the streets of the Welsh market town without a waterproof on. Mid-week and before the seasonal influx of tourists, the streets were quiet as we stocked up on food and supplies.

We drove alongside the River Mawddach for a few miles until river became estuary and estuary became coastline, heading west until there was no more west left to go, the Irish Sea shimmering in the afternoon heat. We stumbled upon the small farm campsite through pure luck. I’m never good at logistics, and part of me enjoys the sense of discovery and serendipitous moments an empty agenda brings – but for every joyous moment of good fortune there has been the time I slept in the back of a car in a Tesco car park. Dipping under the Cambrian Coast Railway, we pulled in to a field directly above the sea. We took our time putting up the tent, basking in the sun while being cooled by a gentle tidal breeze, and time slowed as we shared our tales, fuelled by beer and a sunset that begged for long pauses and time to ponder.

When we awoke, the soft breeze had been replaced by something a little stronger and cloud obscured the sun for the first time in what felt like lifetimes. It was the kind of morning that could only benefit from a dose of procrastination. Our starting point would be Barmouth, a seaside town with everything that it should have: amusements, shops selling buckets and spades, and many a fine greasy spoon. We scattered breadcrumbs over our freshly bought map, draped over the table like the gingham cloth below it, and I ran a finger over the route, almost feeling the lumps and ridges of the orange contour lines. We would cross the great Barmouth Bridge, sharing our passage with the coastal railway once more. Almost immediately we would climb away from roads and towns and civilisation, following footpaths, tracks, and taking to open moorland, keen to avoid the usual routes up the mountain and enjoy the welcome opportunity of a full day in the hills.

The mountains and the sea also have a deeper connection. There is a symmetrical beauty in travelling from the point where a mountain meets the sea to its very summit. 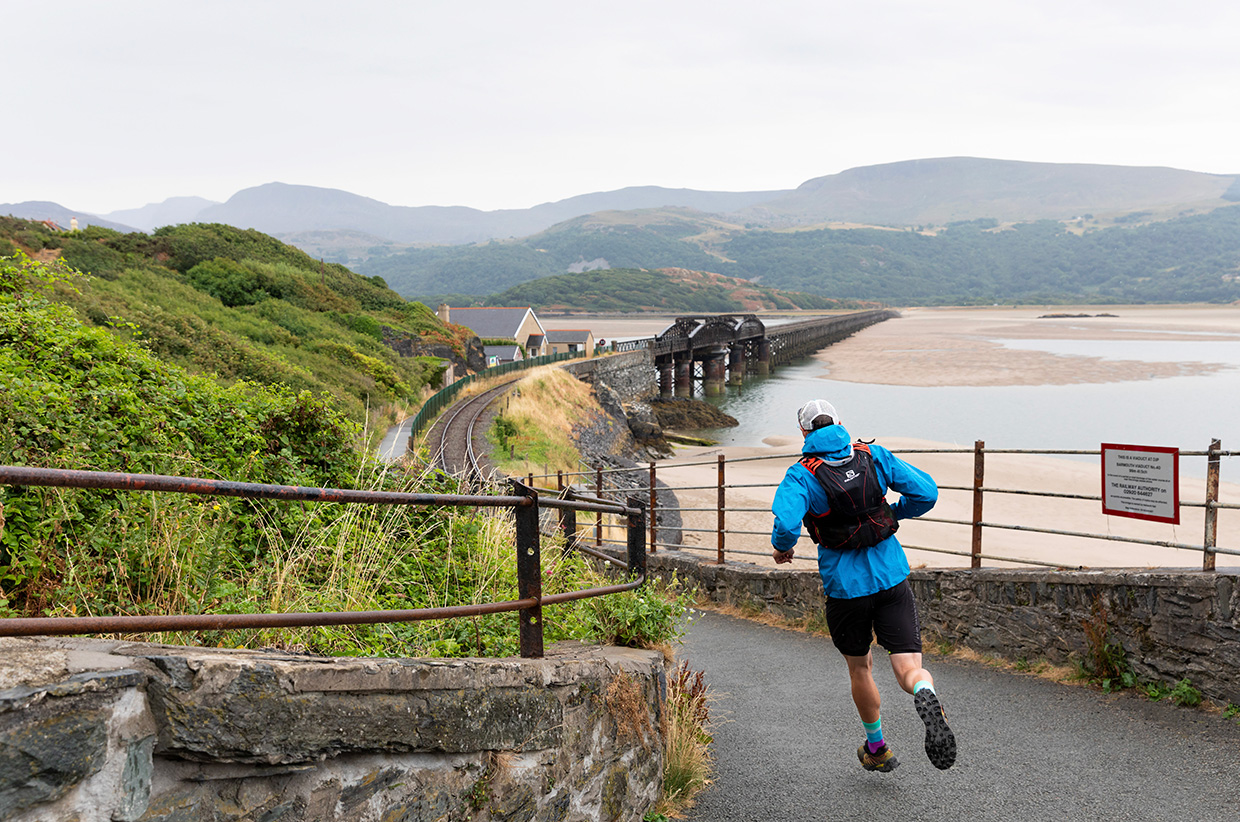 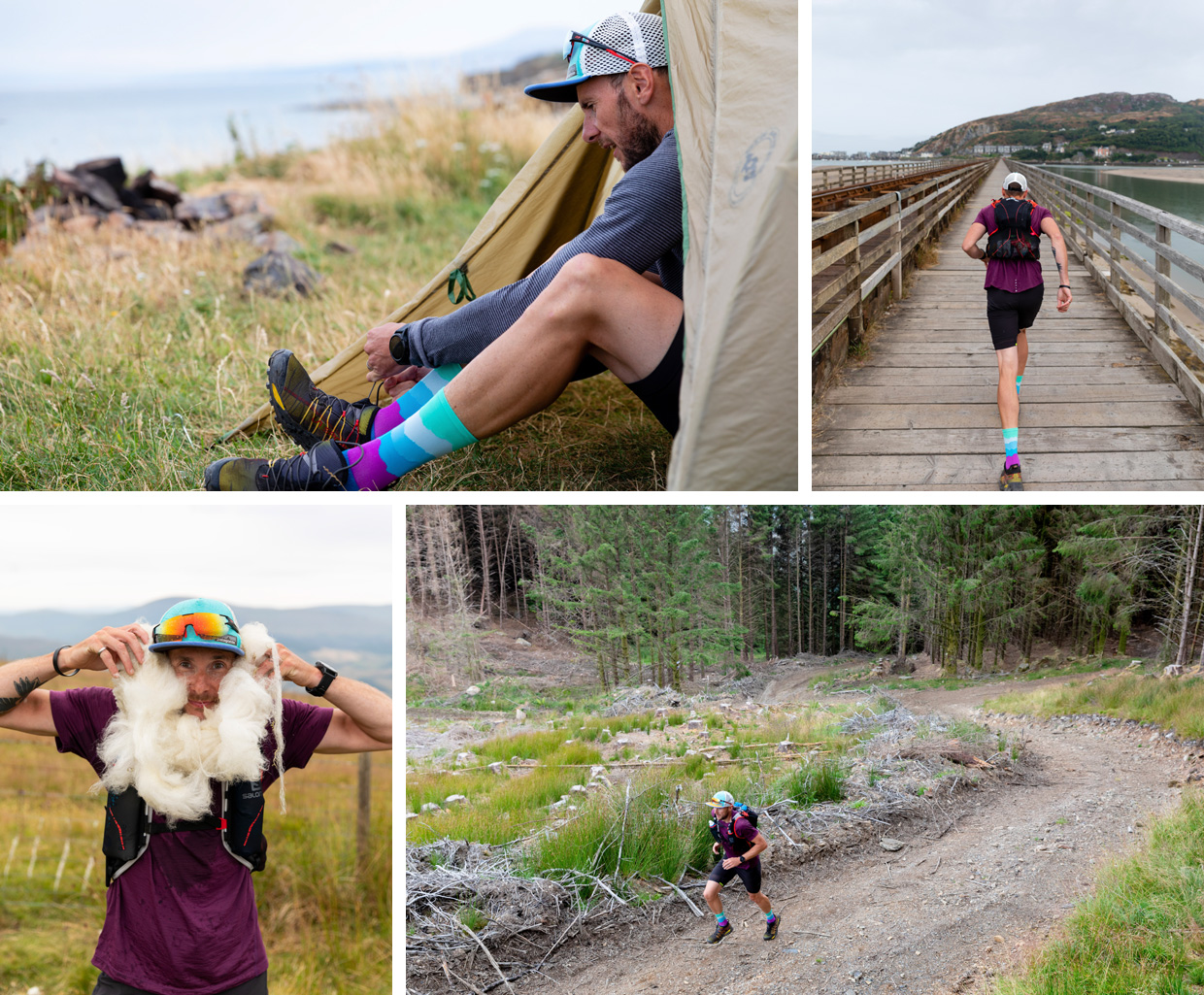 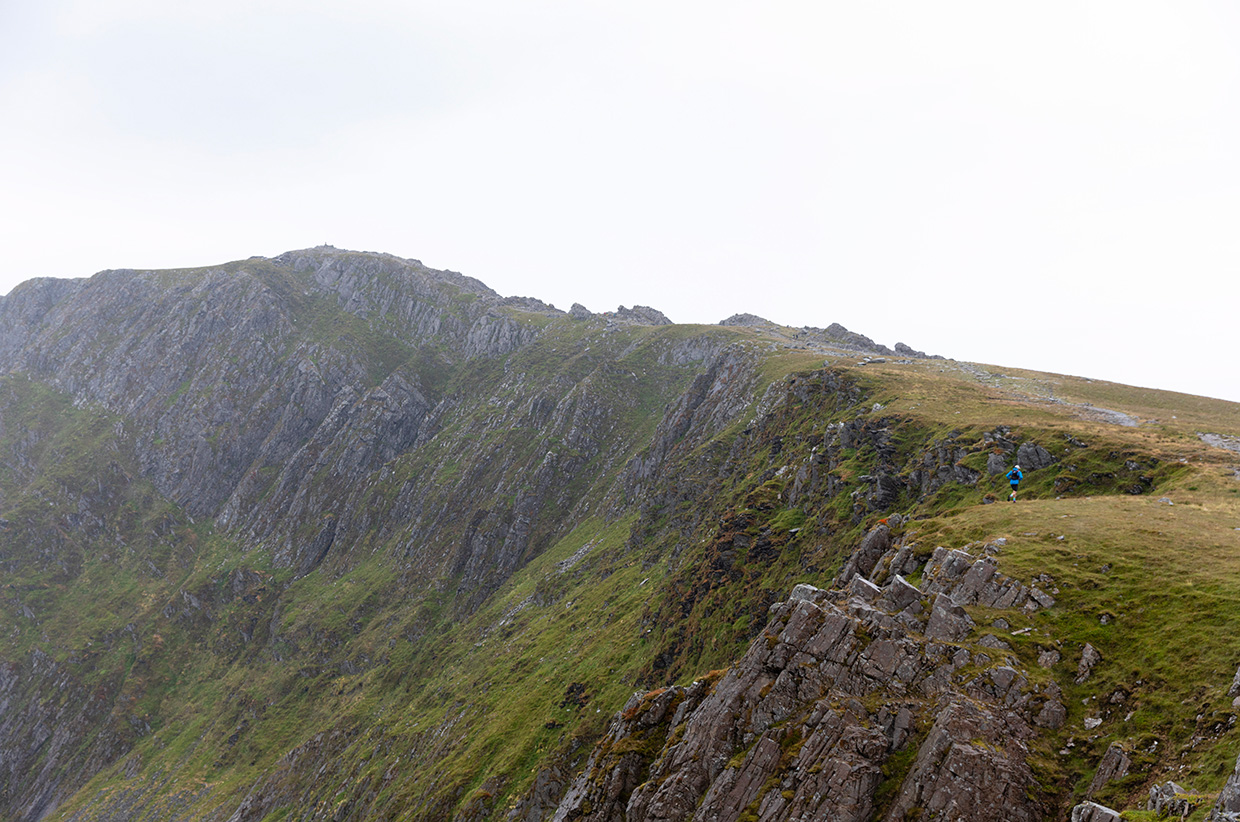 Hints of long-since-lost human intervention still remained – fractions of wall, the occasional footprint of a house. One thing was for sure, though; we were not in the mountains.

For the time being the wind had dropped, but occasional downpours from grey clouds were heavy enough for us to don waterproofs. These showers rarely lasted long and the latent heat of summer made for a sweaty climb through the woods, skirting the edges of houses impossibly tucked into the steep hillside, competing for space and views. The higher we got, the older these narrow ways became. Hints of long-since-lost human intervention still remained – fractions of wall, the occasional footprint of a house. One thing was for sure, though; we were not in the mountains. We were playing on the flanks and it felt cosy – almost claustrophobic – as foliage trapped the rising wet heat.

We reached the edge of a commercial forest. Where a green dotted line indicated a footpath, a wide forestry track replaced it. Machinery tracks carved through the dry earth and the gradient climbed in a perfectly uniform, unnatural way. These weren’t the subtle twists and switchbacks made by human feet, constantly seeking the path of least resistance, trying to flow uphill. Our footsteps become mechanised, repetitive, but it wasn’t long before we were treated to clear space in front and above, leaving the forest behind.

We were now on high moors, open but rolling, without the sharp edges of what we knew was to come. We ran through a duvet of heather and long grass that threatened to reclaim the narrow path. Occasionally it would split or disappear altogether, and just when we thought it was gone for good, reappear as certain and sure as a freshly erected signpost. We were largely traversing, reaping the rewards of our earlier efforts, yet despite our height, Cadair hid behind the diminutive Craig-y-Llyn – our goal hidden for a while longer.

Our strides lengthened as we were treated to our first sight of the summit since crossing Barmouth estuary. Easy ground and an end objective make for good motivators and it wasn’t long before we were climbing once more, this time to Craig-las – one pass away from the mountain proper. Rhiw Gwredydd is a high pass, barely dipping below the summits, but we could clearly see the height we’d already gained, looking back towards the coast. Once again the terrain changed. Gone was the moorland heather; shorter grass and exposed rock created a more mountainous atmosphere. As we reached the sweeping ridgeline of Cadair, our soundtrack was the fizz of droplets hitting hard shells we thought we’d never need, reproofed with Grangers Performance Repel just hours before. The cloud had lifted slightly, allowing us line of sight to Cyfrwy (The Saddle) on our left and Penygadair (Head of the Chair) – the summit proper of Cadair – on our right. Below us was Llyn y Gadair, the mountain pool hanging impossibly far above the valley floor.

I rarely feel ‘in’ a mountain. On it, below it, on top of it, but not in. Here, despite there being nothing but the whipping westerly wind above us, I felt as much part of Cadair Idris as the jumbled rocks of our ridgeline route to the summit, as the sheep-cropped grass underfoot, as the legends that this place has born.

It took no time at all to make our way to the summit cairn. The cold air drove us to move swiftly, torrential rain limiting photo opportunities. We spent much longer in a hut just a few metres below the summit, drying camera equipment, adding layers, and wolfing down Jelly Babies. In another myth, Cadair Idris is the hunting ground of Gwyn ap Nudd, lord of the Celtic underworld, Annwn. If you are unfortunate enough to hear the howling of his red-eared, devilish dogs then death is forthcoming. Luckily all was quiet in our little shelter apart from the drumming of raindrops on the tin roof. It would have been easy to stay longer; the psychological pull of temporary comfort is strong. A few steps from the door, though, and our legs started carrying us downhill. The lure of a snaking trail is more powerful still. 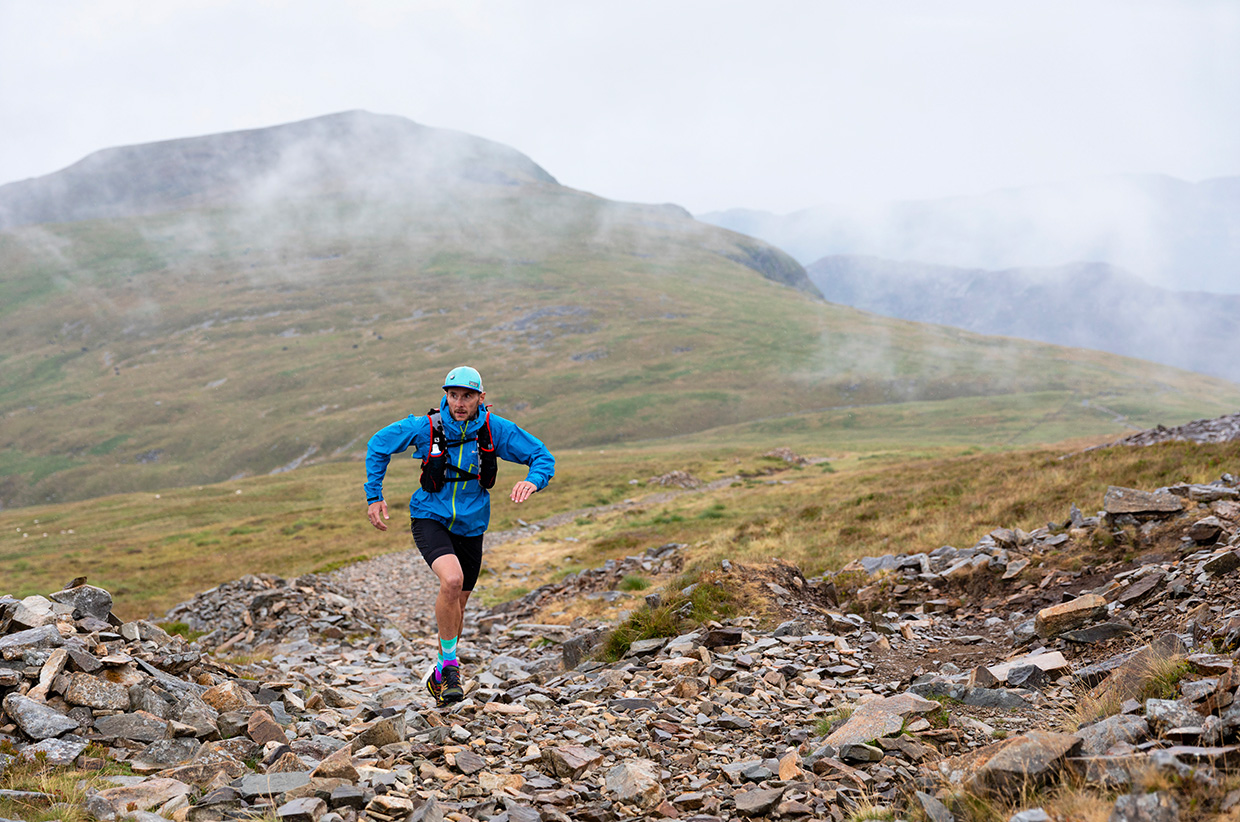 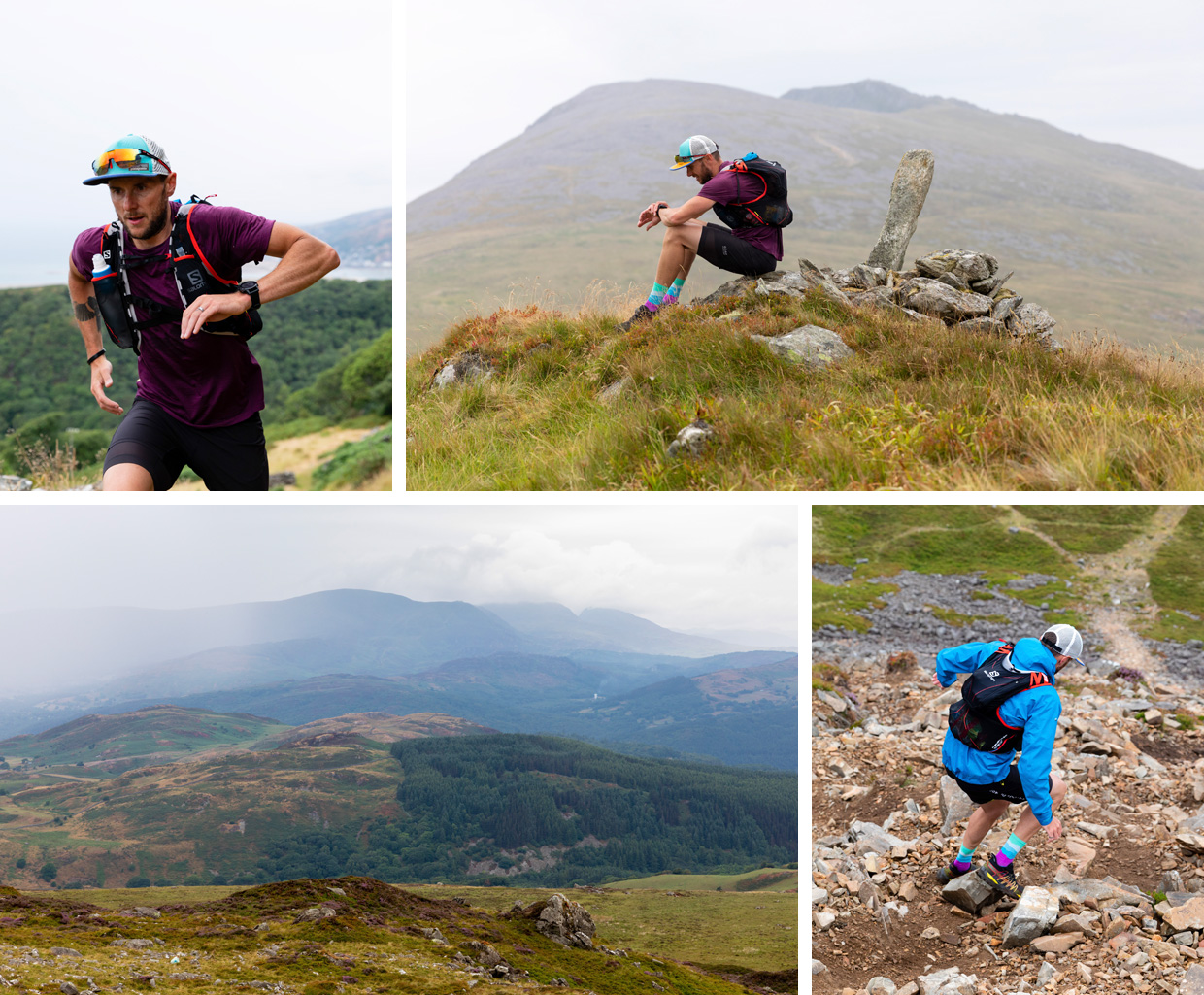 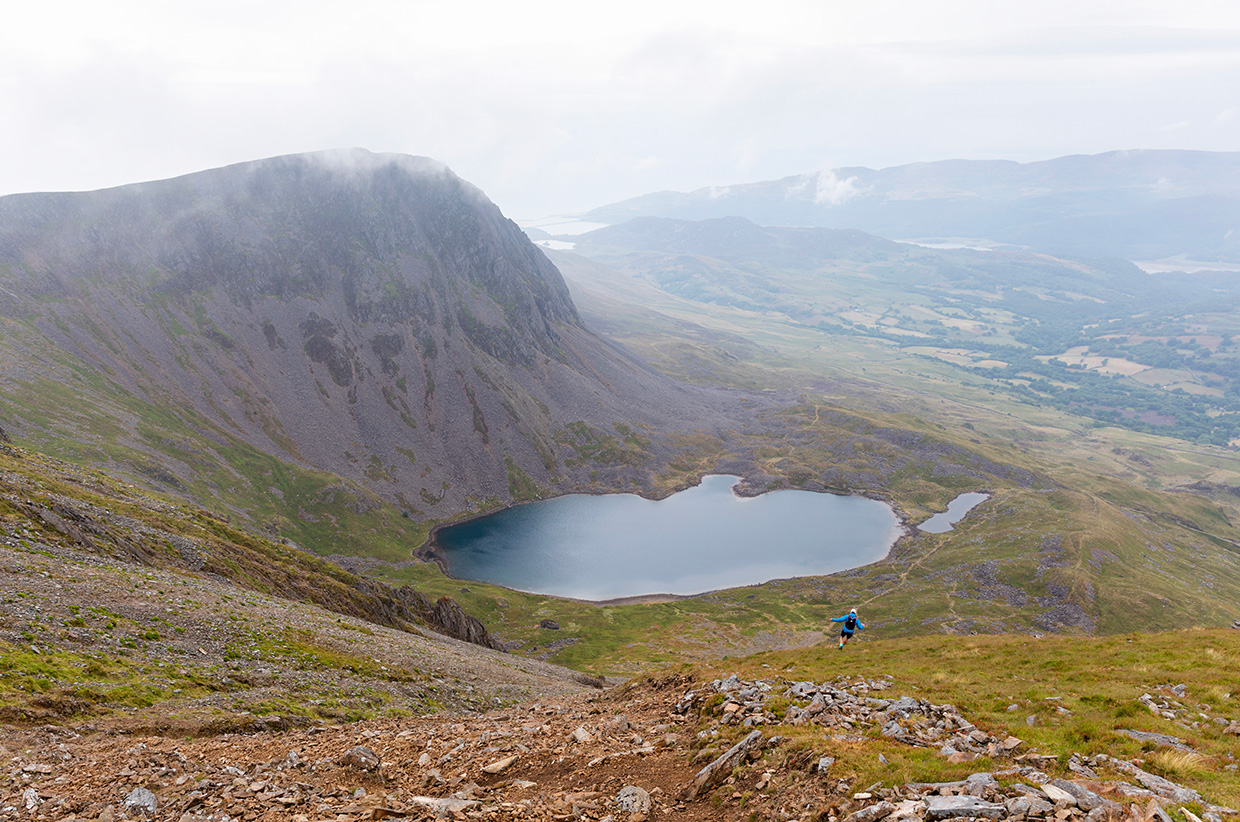 Our trail soon transformed into scree and eroded gullies, losing the 300m vertical height to Llyn y Gadair in little more than that distance. We surfed, skied, slipped, and occasionally ran as the cacophony of moving rock filled the air. Each time we stopped, the scree held momentum for a little longer, rattling down the mountainside, the odd rock pinging its way into infinity. Sitting on his great chair one day, Idris felt pieces of grit inside his shoes. He removed them and cast them down the mountainside. Various large stones dotted around the local area are said to be the pieces of grit he tossed.

The lake marked another boundary, this time between this barren world of rock and the softer country below. We skirted the edge, watching the reflection of the mountain shimmer in the ethereal light that passed through the ever-shifting cloud, now high above us. Finally, turning our backs, we pointed downhill once more, legs opening as the gradient eased. Flowing, rolling, warming, smiling. Weary legs could be pushed in the knowledge that the hard work was done. Pausing low down, I allowed myself one last rearward glance, and involuntarily thumbed my wedding ring. Almost five years ago to the day I had proposed near the same spot. My own Cadair story – this mountain, I realised, is as much part of me as I felt of it.

I turned on my heel and threaded my way between shoulder-height heather, scattering droplets behind me. A date with the coast, a pub, and some tall stories from the locals awaited, but they are tales to share another time.

Produced in partnership with Grangers.

With a heritage spanning more than 80 years and a passion for providing unrivalled protection, Grangers is a British company trusted by active outdoor and sports people around the globe including world-class explorers, climbers, survivalists and everyday adventurers.

Performance Repel is a spray-on waterproofing treatment, which makes it easy to apply wherever you are. Best when applied to a clean, damp garment (ideally washed in Grangers Performance Wash), it is suitable for use on all Gore-Tex® and eVent garments.

Active Wash is a high-performance wash-in cleaner designed to remove dirt, sweat, and odours from all activewear and baselayers. Designed to boost performance features, including the ability to wick away moisture, it works at low-wash temperatures and improves drying times – meaning less time spent doing laundry, and more time pushing yourself to the limit.

The first aftercare brand in the world to earn bluesign® system approval in 2007, Grangers remains as committed to sustainability and the environment as it does to delivering unrivalled product protection.

The bluesign® system checks the environmentally-aware credentials of an entire production chain, resulting in a product completely free from harmful substances and processes. 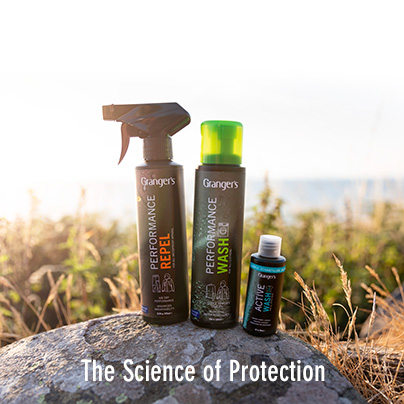 The Wild North-West Only Human 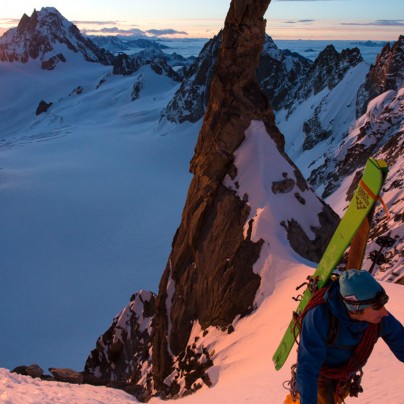