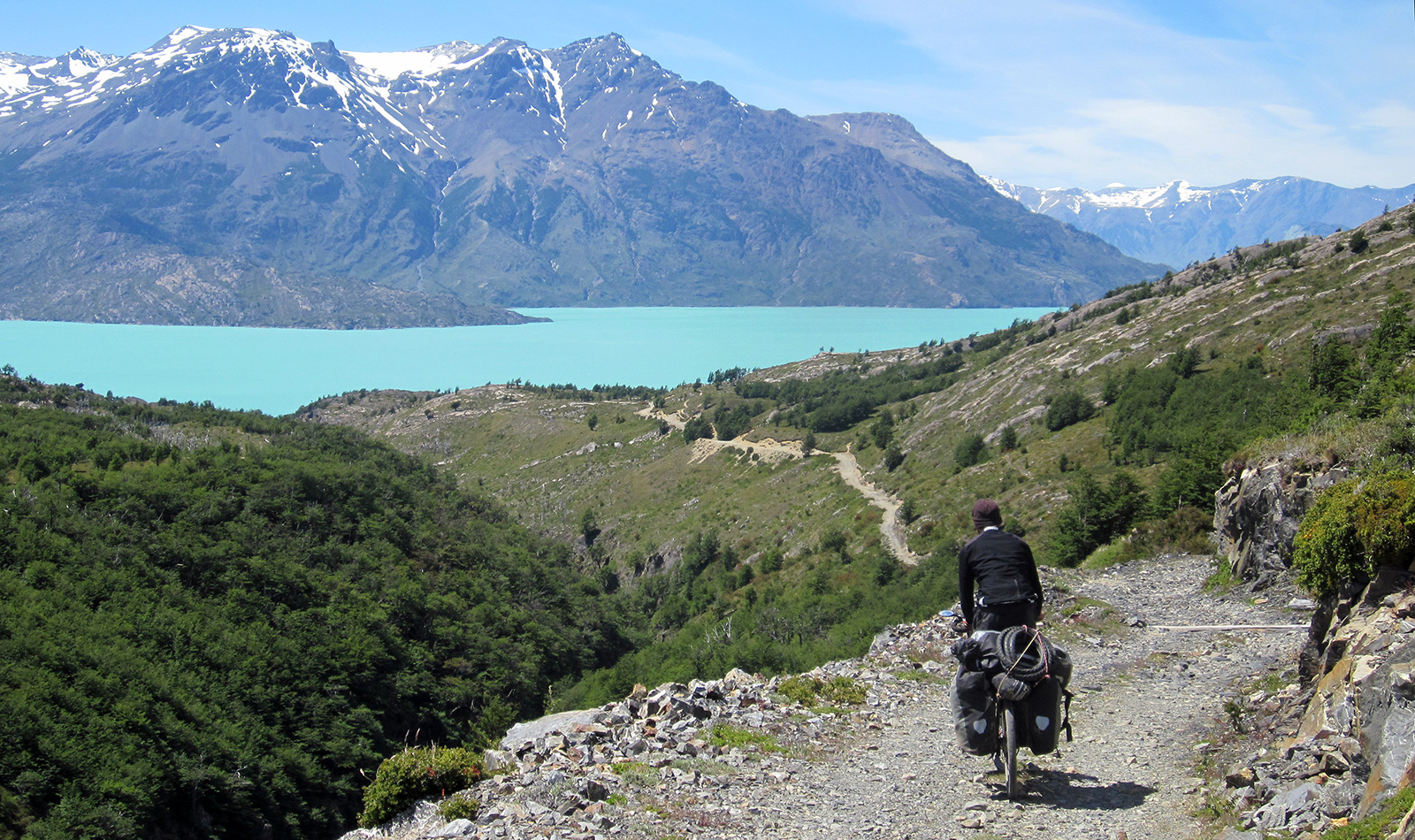 “We’ll have to cycle through at least one swamp” announced Tim, suddenly self-satisfied. The three of us frowned whilst we mulled over the prospect of the impending challenge. We had only scraps of information about the remote Patagonian border crossing between Chile and Argentina, most was rumour and hearsay gleaned from other cyclists who had braved the passage before us and whom we all suspected had toyed with the truth by weaving exaggerated tales of hardship. But in amongst the hyperbole, two details prevailed. Making the crossing by bike would be both a gruelling a slog and a real adventure.

These days Patagonia is brimming with bikers. In the few weeks I had been pedalling north through Argentina I had brushed panniers with the full spectrum, from the ponderous meanderers to the Lycra-clad speedsters, from those on two week breaks from work to the few on epic trans-continental expeditions, branded nutters by the rest. My next target was biker-central, The Carretera Austral, a pebble-strewn rollercoaster of a road which connects up the southern settlements in Chilean Patagonia and as it does so swings and dives relentlessly through thick forests and past fjords, glaciers and steep mountains.

For cycle tourers it’s easy to see the appeal of the Carretera, and once it would have been easy as well to make the crossing from Argentina into Chile in order to latch on to it’s southern end, but things have changed. Twelve years ago the Carretera was extended one hundred kilometres further to the South and now reaches down to the small Chilean village of Villa O’Higgins. No roads link the village with neighbouring Argentinean settlements, but a crossing does exist. Intrepid bikers must rely on boats to traverse two lakes, Lago Desierto and Lago O’Higgins, but the real snag comes with crossing the chunk of land separating the two. A small track winds through forest and swamp, a place which has entered cycle-lore by virtue of the fact that bicycles do not belong here, perhaps ironically the reason why bikers have taken to the crossing with such enthusiasm. Coming from Argentina, this is the most expeditious way to get to the Carretera and the only way to ensure you avoid doubling back and lengthy detours. There is one more perk, after experiencing firsthand the various tests and trials of the pass, you can spin wild tales and poke fun at cyclists coming the opposite direction who have it all ahead.

We had only scraps of information about the remote Patagonian border crossing between Chile and Argentina, most was rumour and hearsay gleaned from other cyclists who had braved the passage before us and whom we all suspected had toyed with the truth by weaving exaggerated tales of hardship. 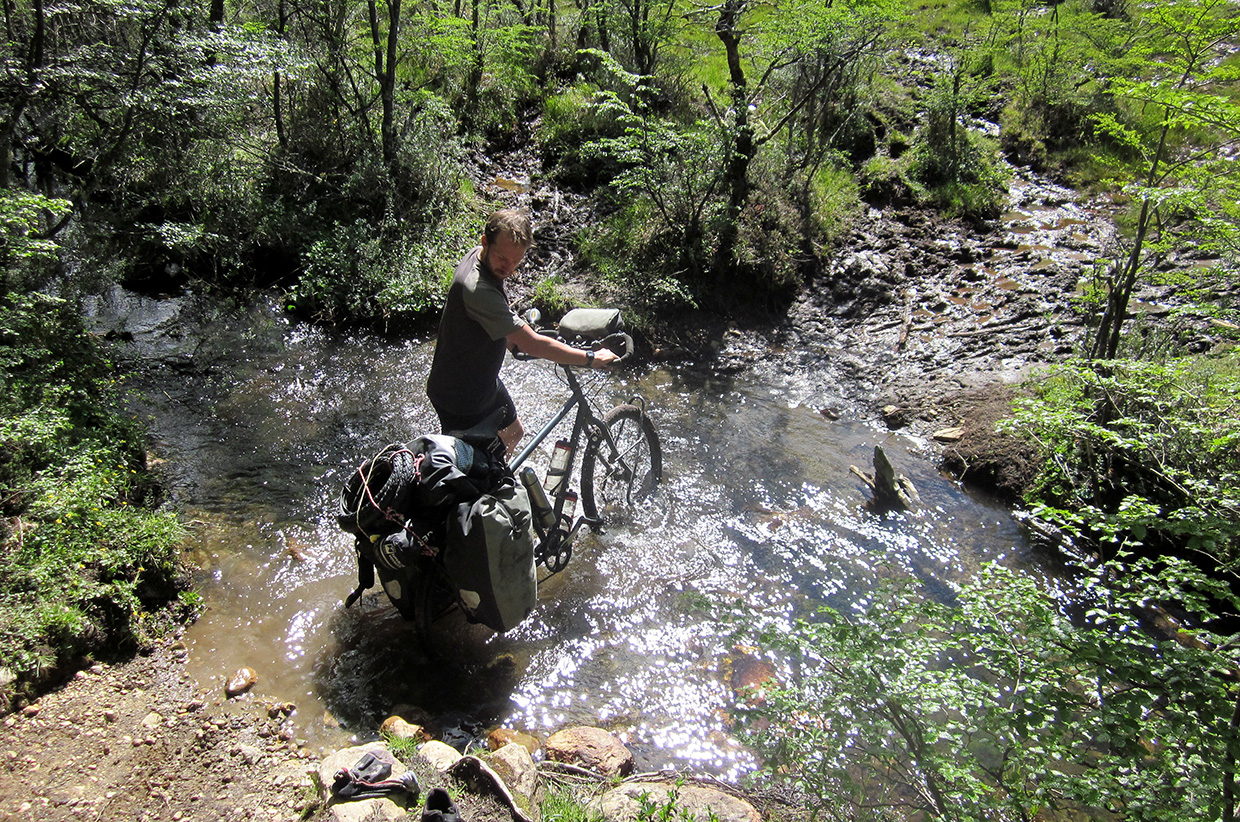 Condors swooped and glided in elliptical circuits above. The midday sun cast their shadows down to earth, they darted across the ragged terrain like sinister predacious beasts until they crashed into the prodigious white facade and snowy crags of the Patagonian Andes which dominated more and more of the vista until we were all cowering under their prestigious glint.

The small Argentinean town of El Chaltén was the precipice and it was here I came across three other bikers readying to make the crossing. We were all cycling solo days before, now united by the passage across the border, and each of us expectant and brimming with intrigue. Vincent was the serious cyclist of the posse, a lean, twenty seven year old Lycra clad Frenchman who shaved his legs and carried his gear in a slick, egg shaped, perfect white trailer. No corners, just curves and a hatch for access. It belonged on the set of a science fiction film set in deep space. A French flag stood proud and sturdy and in the breeze towards the rear. Alongside myself and Vincent was Tim, a conspicuous Dutchman, tall with refulgent yellow panniers, a luminous yellow jacket and an equally luminous grin. For Tim this was an insouciant jaunt, he claimed no solid time line, direction or schedule. His plan, if that’s what it was, was to ride vaguely northward through South America whilst his money lasted. The last member of our motley peloton was Michel, a sixty two year old Frenchman with the wiry appearance of someone for whom travelling by bicycle had been habit for decades.

The next morning we set off early from El Chaltén, hoping to avoid the fierce headwinds that are the nemesis of every Patagonian cyclist. The four of us performed a ballet, tucked into slip streams, shuffling and re-ordering, buoyant and giddy to be riding as a unit. Condors swooped and glided in elliptical circuits above. The midday sun cast their shadows down to earth, they darted across the ragged terrain like sinister predacious beasts until they crashed into the prodigious white facade and snowy crags of the Patagonian Andes which dominated more and more of the vista until we were all cowering under their prestigious glint. The sheer granite cliffs of Mount Fitzroy took precedence over the rest, it stood aloof and self important in centre stage, flouting its juts and angles. Predictably the wind followed the rain, lifting giant ethereal columns of dust from the road which surged towards us and time and again we skidded to a halt and braced for the sand blasting. Finally we arrived at the dock to hear a local man dole out the grim message. The boat, he explained, has no captain; we won’t be going anywhere soon.

I watched Vincent digesting the news; he shook his head and sighed his frustration. Tim’s almost immutable grin morphed into a troubled frown as he muttered profanities in Dutch. My attention shifted to the sixty two year old Frenchman, his eyes met mine, he shrugged, grabbed an invisible Senorita and began dancing through the pelting rain with his imaginary girlfriend whilst singing ´La Bamba´. At least we were in this together. Then, as if choreographed, a van skidded around the corner and the boat´s captain stepped out into the murk. Relief spread through the party. We were leaving tonight after all.

The boat dropped us on the opposing lake shore amidst a multinational bunch of trekkers. Bicycles were unloaded, tents thrown up hastily and soon stiff limbs were being stretched whilst pasta simmered away. The next morning sunlight soaked our free campsite and I heard the sound of zips being undone and watched as one by one another head peered out of a tent, eyes admired the stillness of the morning and of the lake and then tentatively glanced backwards at the hills and the daunting prospect upwards. A few braved the chill for a quick dip in the glacial melt waters whilst Argentine trekkers gathered and pointed towards the bobbing bodies. “Look… Europeans!” they gasped as if they were describing the exotic habits of wild creatures. They observed us with the same look of wonder and concern that most people reserve for the very, very drunk. 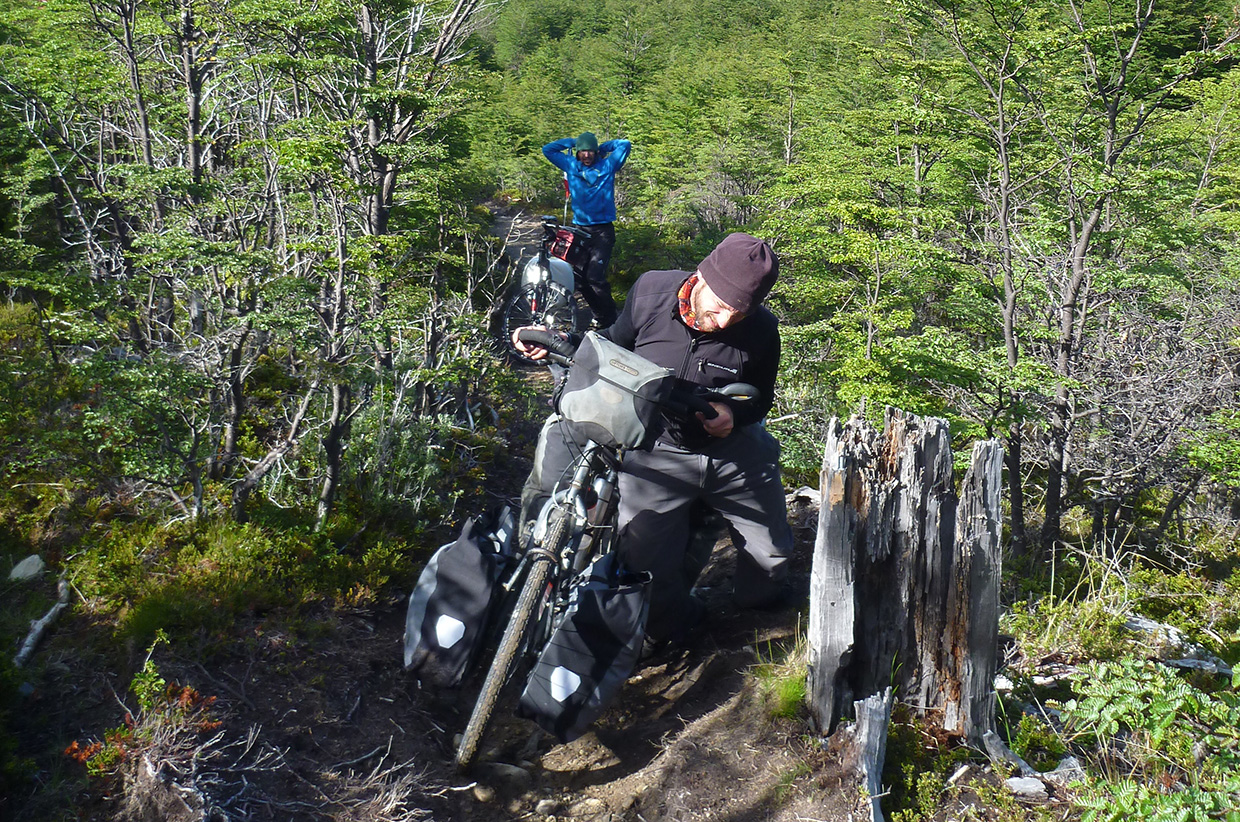 Porridge and coffee consumed we set off through the trees, two trekkers in tow. Over the next five hours we pushed and dragged our loaded bikes through sticky mud and thorny bush on a narrow track, long since rutted out by horses. We hoisted them over the fallen rotting remains of colossal tree trunks, carried them on our shoulders whilst wading through rivers knee high in water, hauled them up impossibly steep slopes and edged over slippery tree trunks traversing turbulent waters below. The path crested the foothills of glistening, snowy giants and then foundered deep into moist, mossy, deciduous green whilst black faced ibis cawed and kites and hawks glided languidly overhead. A Slovenian trekker amongst us was the only one to have travelled this route before and he was finding it tough to disguise his glee at our painstaking passage.

“Are we past the worst bit yet?” Came a hopeful voice.

“No no no! Of course not!” replied the Slovenian with mischief in his eyes. He paused for dramatic effect and so that we could all ruminate over this fact. “You haven’t even reached the first swamp yet! And then there’s the climb to the pass, the river with no bridge, and the second swamp and… “

“OK, OK!” I interjected, knowing that it was better to cut him off before more unwelcome details emerged and he had confirmed that we would probably only just make it to Mordor by sundown.

Perhaps it was because we were new friends and there was some male bonding going on, or perhaps it was simply out of necessity but at times our journey seemed interspersed with moments that belonged to melodramatic war films. Every so often weary legs would lose their footing, another cyclist would arrive at their comrade’s aid, hauling the fallen to their feet and returning to action. In between the groans of effort and dismay emanating from our inching party came the scraping of panniers, the rattling of racks and odd music from strange birds which echoed through the empty forest. Heads low, shoulders hunched, faces wearing the strain but with underlying resolve we moved onwards. It seemed improbable that there would be anything marking the border crossing out here but as we edged over the apex of another hill the words “Bienvenidos a Chile” (welcome to Chile) slowly rose up to meet jaded and then triumphant eyes. There was nothing else here of course, but the sign meant everything. We summoned the energy to pose for the obligatory group shot, munched biscuits, gulped down water and blissfully freewheeled down the rough track on the other side of the pass to Lago O’Higgins, a great expanse of striking turquoise, inviting one more icy dip before the much heralded boat arrived to take us to Villa O’Higgins and the very beginning of the Carretera Austral.

As we approached the boat two fresh faced and earnest cyclists appeared heading in the other direction, I wished them good luck, adding “and watch out for The First Swamp”.

In between the groans of effort and dismay emanating from our inching party came the scraping of panniers, the rattling of racks and odd music from strange birds which echoed through the empty forest. 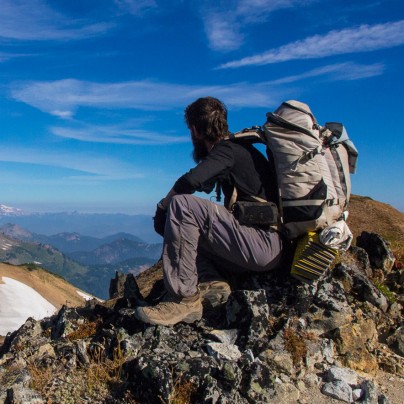 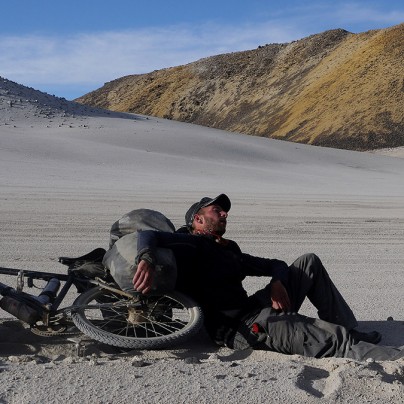 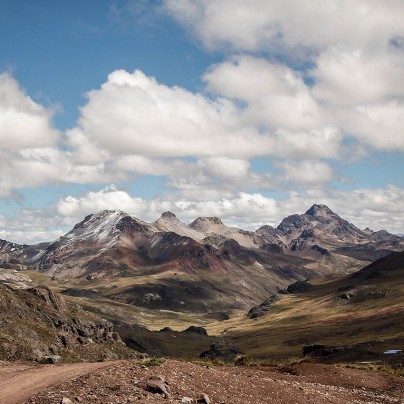