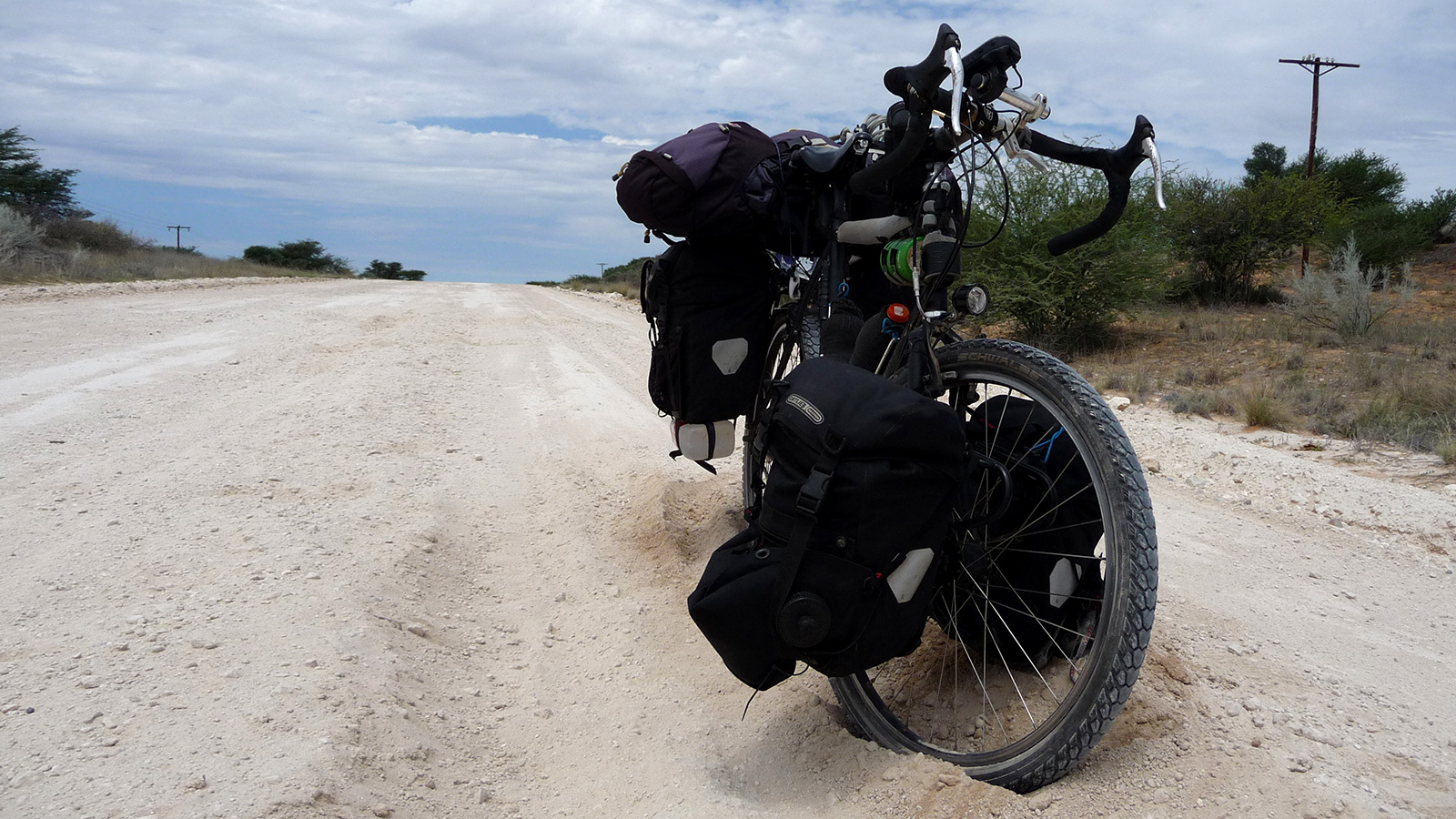 Ever since arriving in South Africa I’d been looking for the chance to test myself, a way to push myself to my limits physically and mentally, to live the ultimate adventure.  To cycle through the South African Kalahari in the middle of summer seemed to be to be a suitable challenge.

Between Kimberley and Kuruman I spent a couple of days getting used to a “tropical routine”.  Early morning starts and cycling until 9am then hiding from the sun until about 6pm in my hammock under a tree somewhere, followed by a couple of hours cycling in the evening.  In this time I also gradually increased the amount of water I carried with me up to a maximum of 19 litres.

Leaving Kuruman I was feeling strong and my bike (Mr Hyde) took the payload of 25kg baggage, 10kg food and 19L of water without complaint.  About an hour from Kuruman I was enjoying the fresh cooling air as I cruised downhill at about 65km/h.  At this point the thought entered my mind that it wasn’t smart to cycle so fast on this road, if a car was to come I’d have to go onto the gravel hard shoulder and at such a speed that was going to hurt.

With this thought I quickly glanced in my mirror and to my horror saw 3 cars coming over the horizon a couple of hundred meters behind me.  I looked ahead to see if maybe I could escape to the other lane only to see a truck coming the other way, hmm this is going to hurt!

A wobble, skid, the grinding of body and bike through gravel and a dust cloud later I found myself lying on top of and wrapped around Mr Hyde.  “Ooh, this is inconvenient… don’t fucking move, think, relax, think, stay calm, wait and see what hurts and what is broken.” and so I lay still as the dust settled.  Then I went through the process of moving things and was happy only to feel the pain and throbbing of my forearm, “Don’t think it’s broken just nasty gravel rash.”

I did my best to clean up my arm with Babywipes, cut off a rather thick flap of skin with my blunt nail scissors then spent 20 minutes getting Mr Hyde road worthy.

I quickly glanced in my mirror and to my horror saw 3 cars coming over the horizon a couple of hundred meters behind me. I looked ahead to see if maybe I could escape to the other lane only to see a truck coming the other way, hmm this is going to hurt. 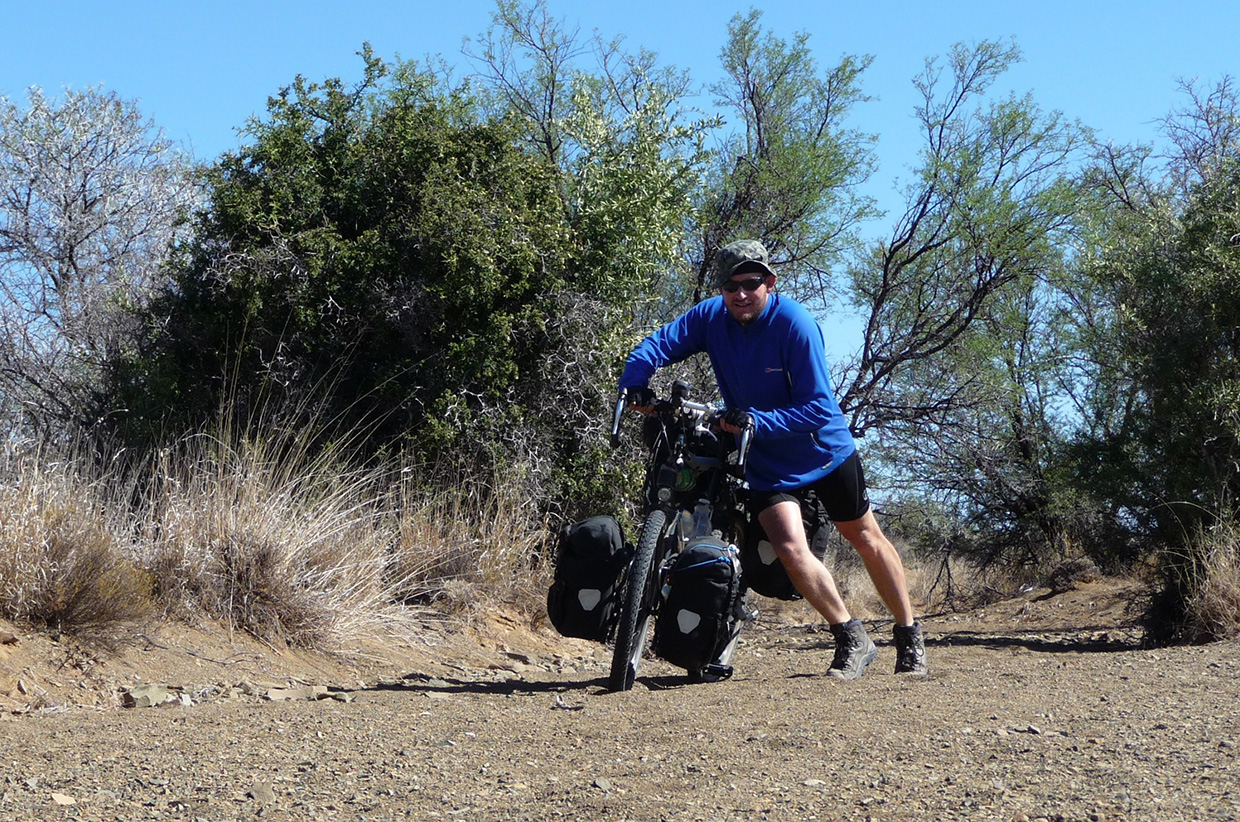 As I went to bed I cried, and now again as I write this.  The warmth, openness and love which this group of friends gave me took me in 12 hours from emotional rock bottom and recharged me to where I needed to be.  Giving me the strength to carry on.

For a solo cyclist this is a possible moment of disaster where fear, pain and doubt can take over. I considered heading back to Kuruman to find a clinic to get myself checked out but figured they’d just clean me up and tell me to rest for a while.  I was really worried that this might give me an excuse to quit my desert adventure before it really started, that my fears would reinforce my doubts and leave me stuck in Kuruman. “No way young man, man the fuck up and move on.”  And so a little beaten up, a very sore arm and a couple of bruised/cracked ribs I battled on for a couple of hours that day and pushed on for 2 more days.

In recent years I’ve become very tenacious, determined and will almost never quit.  This has come partly thanks to cycle touring and overcoming some big challenges in my adult life.  In the weeks after my Kalahari adventure the penny also dropped that it is also an overreaction, an over compensation for my teenage years when I was a quitter, had no self confidence, was bullied, could not finish anything I started, and was of course that guy that always got chosen last for the football team because of my lack of physical ability and fitness.  During this time I often thought and dreamed of big adventures as a little escapism and loved the stories of big adventurers like Scott, Shackleton, Everest climbers and the big African explorers.

I arrived two days later in Van Zylsrus.  Tired from sleepless painful nights in my tent, sore from the last 20km of bumpy dirt roads and generally a little rough.  I decided to bite the bullet and just get an expensive room ($55) so that I could clean myself up properly and see what the gravel damage really was and take a rest day.  That afternoon I slept for 6 hours and another 10 that night.

Air conditioning?  Soft pillow?  Clean white sheets?  Am I dreaming?  I try to sit up and an agonizing pain shoots my chest then I remember…

Though the physical pain in my chest and arm are very unpleasant, I also feel another kind of pressure on my chest.  I’m feeling alone and trapped, no way forward because I really don’t see myself cycling the next 600 kilometers on dirt roads in this state.  No way back because my visa would run out in just over a week, unable to stay put and rest because I can’t afford a luxury place like this, but there’s no cheaper option nearby.  So I lay for another hour in bed feeling pretty sorry for myself then moved to the kitchen to see if I could make some breakfast.

Though breakfast was not included the owners invited me to join them and their visiting friends.  This later led to an invite to join them on a game drive.  I spent the whole evening and next day with this family and friends and felt as if I’d known these people for years.

As I went to bed I cried, and now again as I write this.  The warmth, open-ness and love which this group of friends gave me took me in 12 hours from emotional rock bottom and recharged me to where I needed to be.  Giving me the strength to carry on.  So the next day I once again headed out into the wilderness bruised and sore but emotionally stronger. 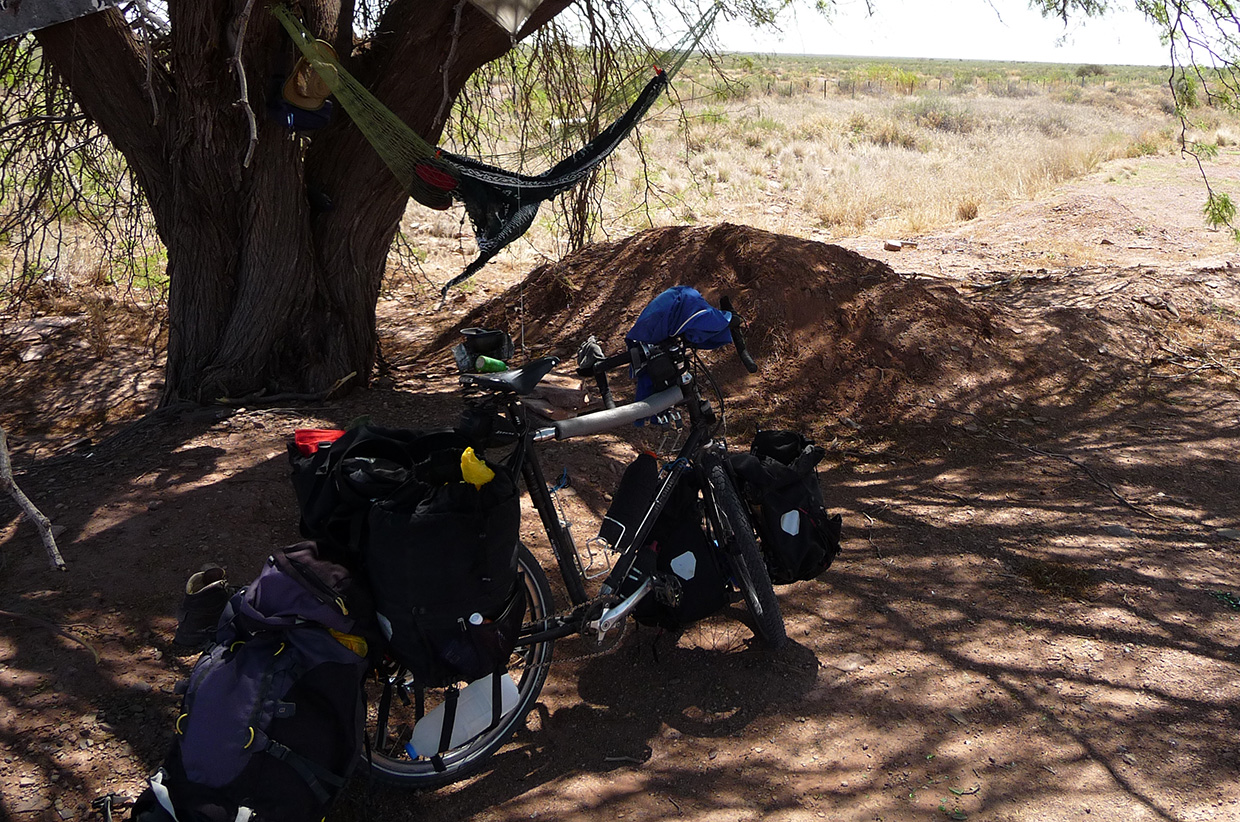 The next couple of days were full of pain and misery and felt more like fighting for survival than a fun adventure.  The gravel road was very rough with many deep sandbanks.  My left arm could only be used at about 80% and my ribs hurt like hell at bumps, so I found myself puffing and panting like an F16 pilot in a G simulator tensing my chest muscles for every bump and grabbing breaths in between.  If I hit a sandbank I was unable to power through so instead often just dropped the bike to save the pain in my ribs or arm.  Though picking a 60kg+ bike up out the sand several times a day is a poor second choice and sometimes I almost passed out from the pain.

As a little distraction during my lazy afternoons hiding from the sun in my hammock I would read Ernest Shackleton’s book “South” for a little irony in my shade at 40-45 degrees C .  I considered myself lucky to have plenty of food and water with me, only be trapped by beaurocrats and pain rather than ice and sea.  Those men really were tough; such different times we live in.

After these few days of misery I once again came across a small village with a hotel.  I was truly broken, miserable and when I started thinking “I wish I was back home now, in my simple life with my (ex)girlfriend to care for me.”  I knew it was time for something drastic, so I blew my budget by booking a hotel and sent myself to bed for 3 days.

Still a little sore but rested and with only 2 days left on my South African visa it was time to get moving, pain or no pain.  Once in Namibia the roads rapidly improved and I starting finally believing I’d make it to Keetmanshoop where I could complete my Kalahari challenge and rest before heading into the Namib desert.

Fate decided at this point that I was getting a little too happy with myself and threw in a curve ball in the form of food/water poisoning during my last night.  Not the most pleasant of things at the best of times but after an unusually long day in the Kalahari I was very dehydrated so it hit twice as hard.  The extra complication of trying to get out of a sleeping bag and tent and then dig a toilet in the middle of the desert (not forgetting to avoid the puddle of sick just outside the tent) made an already unpleasant situation even more tedious.

By the morning I was broken had no energy left and the only obvious and safe solution was to pack up and hope to get a lift the last 70km to town (on previous days I’d been passed by a car about once every hour or two).

“Come on get up!”, “I can’t I’m too tired.”  I packed up my sleeping bag and got dressed then collapsed onto my bed again. “Come on mate if you’re still lying here when the sun gets out this is going to get a lot worse very quickly”.  So the conversation with myself continued for the next hour and a half as I packed my gear up. “If you don’t get off your lazy arse and push that damn bike to the road you could well die here.”  It was obvious to me that if I stayed put out of sight, that once the sun came out and got above 40 degrees things would get very bad very quickly.  Slowly I mustered the strength and courage to push my bike the 20m to the road with the occasional stop to launch yellow/green energy drinks out of my mouth and nose at 100km/h.

At such a moment when travelling alone it is painfully obvious that one is walking on a knife edge, on one side just a bad day that costs a pair of underpants and a couple of recovery days; on the other the first in a series of events leading to becoming “that guy that died in the desert.”  Luckily I had the tenacity and strength to get to the road, and was lucky that someone picked me up within half an hour, and the rest as they say is history…

Sometimes I wish I could sit next to a younger version of myself just after he has once again been beaten up for no good reason.  Put my arm around him, dry his tears and say “don’t worry mate, you’re going to have a better life than these thugs, you’re going to grow up to be a nice guy and one day, just maybe you too will live a big adventure.”

As a little distraction during my lazy afternoons hiding from the sun in my hammock I would read Ernest Shackleton’s book “South” for a little irony in my shade at 40-45 degrees C . I considered myself lucky to have plenty of food and water with me, only be trapped by beaurocrats and pain rather than ice and sea. Those men really were tough; such different times we live in. 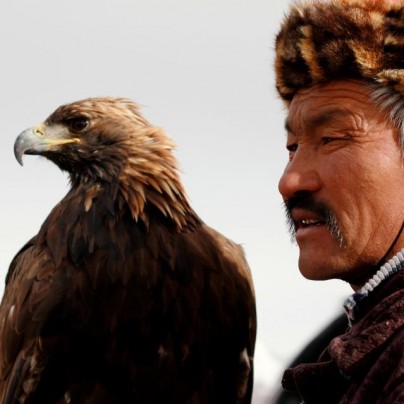 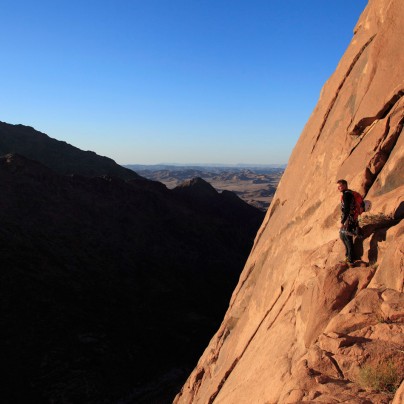