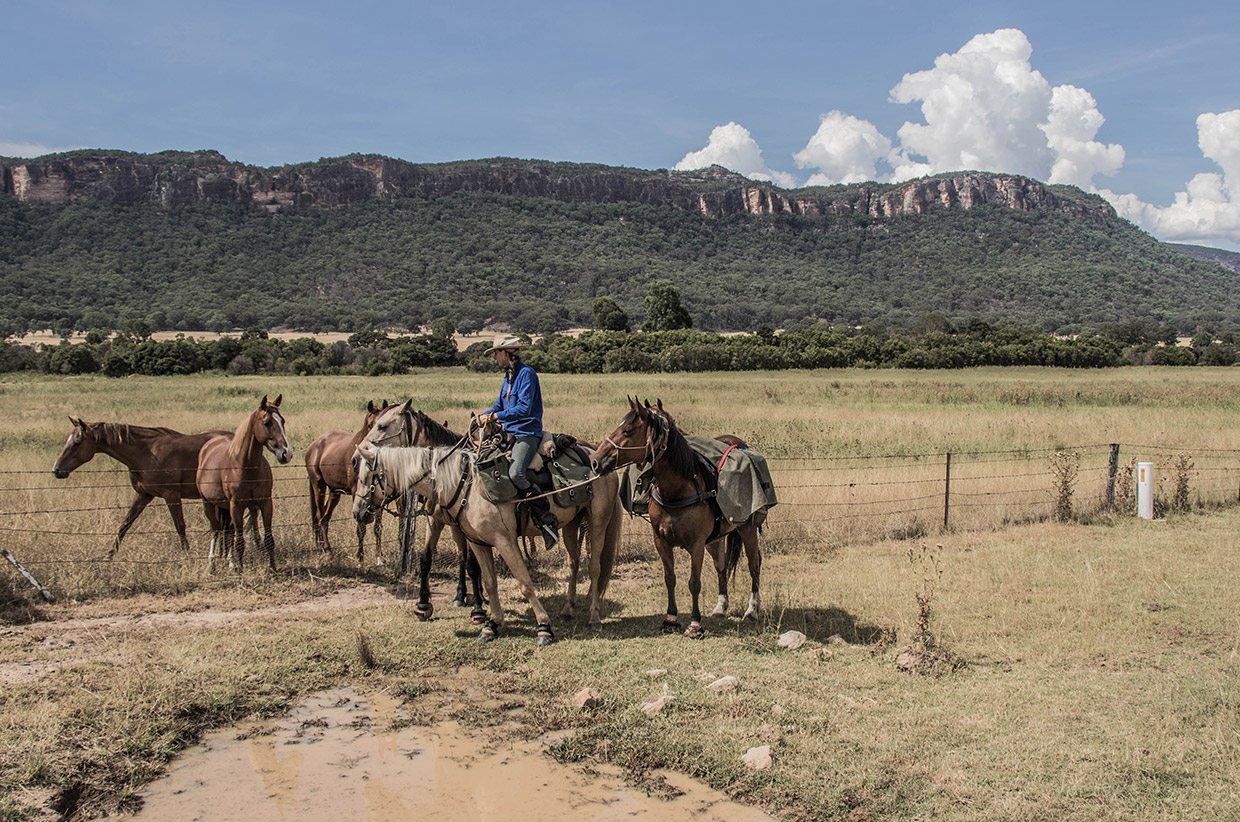 The 2015 Adventure Fund winner Alienor Le Gouvello is a third of the way through her 5,330km solo horse-ride across Australia. Laura Hampton joined her in New South Wales.

As the sun begins to nudge its way up and into a brand new day, we sit in silence at the top of the Glen Davis Canyon in New South Wales, casting our eyes over a valley floor seemingly frozen in time. I imagine a flock of velociraptors moving in unison along its meandering curves, chased by an imaginary – but none the less hungry – T. Rex. There are lots of things that can kill you out here in the Australian bush, but a dinosaur is not one of them. I’ll not rule out one of its descendants, though.

Over tin cups of bush coffee thick with dregs, we soak up the sounds of a rainforest slowly beginning to come to life. Still reeking of last night’s bonfire we sit silently in awe of our surroundings, breathing in the minty and pine-like incense of over 70 different types of eucalyptus trees. The natural splendour is mesmerising. We revel in our isolation.

I stretch out my tired limbs from yesterday’s climb up to our grassy hill-top camp and stand tall to let out my first primeval howl of the morning. Alienor follows suit and we smile over at each other, amused at how wild and primitive we have become. Our cries of joy whistle out into the crisp morning air and down through the valley below. The sound reverberates around us, bouncing against ancient walls of apricot sandstone pushed up by a millennia of movement.

Thirty-one-year-old Alienor Le Gouvello is less than a third of the way through her ambitious 5,330km solo horse-ride across Australia. Running the length of the Great Dividing Range, the Bicentennial National Trail passes through 18 of Australia’s national parks and more than 50 state forests. This is no walk in the park.

Thirty-five people have so far completed the trail from start to finish, only two of them women. To up the ante even further, Alienor has chosen three semi-wild horses called Brumbies as her preferred mode of transport – descendants of thoroughbreds and stock horses brought over by early European settlers. They’re a contentious topic out here in Australia. Numbering over a million, they constitute the world’s largest wild horse population and are simultaneously cherished and vilified out here.

While conservationists see them as a runaway pest responsible for decimating the country’s delicate ecosystems, advocates hold them up as a national treasure immortalised by the nation’s favourite poet Banjo Paterson in The Man from Snowy River.

Incredibly, just six months before leaving, two of Alienor’s three horses were completely wild and still roaming free on the plains of New South Wales. It is a testament to her skills as a horsewoman that she is able to ride and handle them safely on terrain that would prove daunting to even the most experienced rider.

With such huge distances still to go, Alienor’s top priority is the health and wellbeing of her horses. ‘If they get sick, I go nowhere. It’s as simple as that.’ She rotates them every day, riding one, with another as pack horse and the third getting a much-needed day off. ‘I left Melbourne just over four months ago and we’ve already done around 1,300 kilometres,’ she says. ‘The high Victorian country was particularly tough because it’s so steep and mountainous. I’ll be heading into Queensland soon which will bring a whole raft of new challenges – from crocodiles and snakes to infections in my horses caused by the humidity.’

As we sit on top of a large outcrop slowly being warmed by the morning sun, Alienor becomes quite philosophical: ‘Being out in the wilderness like this, it just does something to my soul that I can’t quite describe. I’m just in total awe of this place.’

Yet despite Australia being home to some of the world’s deadliest creatures, it’s actually other human beings that make Alienor most nervous: ‘There’s nothing in nature that really scares me, apart from snakes. No, the only time I’m truly frightened is when blokes come up to my camp in the middle of the night and intimidate me. A couple of days ago I even had to resort to calling the cops.’

Like many adventurers out alone in the field today, Alienor relies on her SPOT to tell loved ones that she is safe. A small orange GPS logs her location and sends preselected messages to a rescue and support team every evening. ‘I carry it with me 24 hours a day so that if anything happens, my horses take off on me or whatever, I still have an emergency device. It has three buttons on it. One that says I’m safe and have reached by destination, the second that I need help within the next few days, and a third one which sends SOS I’m dying, send in a chopper.’ 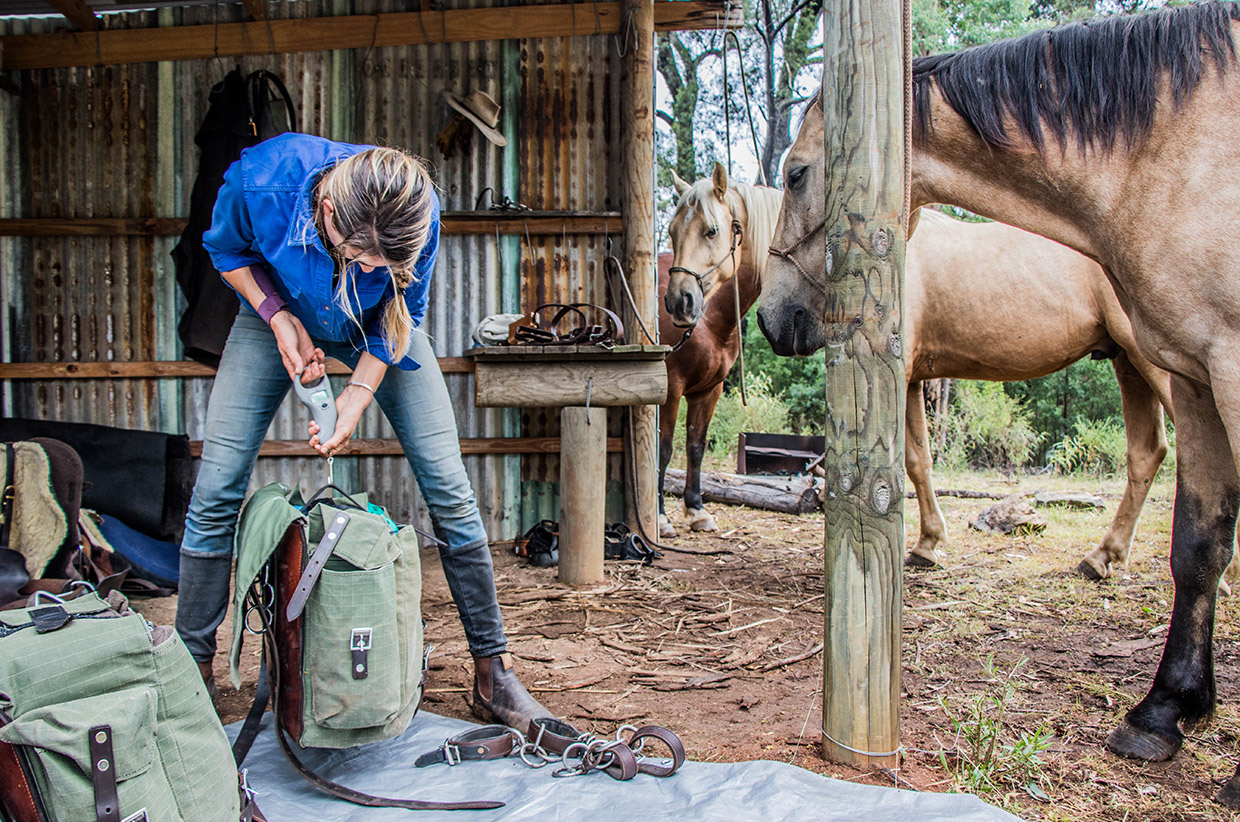 For much of the day before, we’d been chased by an ominous thunderstorm that finally caught us just a kilometre from where we were due to stop. Fat globules of rain splashed onto tinder-dry leaves and soothed my hot, insect-bitten skin. Somewhere nearby in the deluge was, apparently, the world’s oldest tree.

Not wanting to get her gear sopping wet just before we stopped for the day, Alienor and her horses scampered on ahead, leaving me to clamber up the hill in what had fast become a torrent of soupy red mud. I started to wonder if I’d ever actually reach the top just as the track began to level out and the acrid smell of damp woodsmoke drifted down to greet me.

By the time I’d arrived, Alienor had already begun to set up camp. By now on autopilot, she’d cordoned off a small patch of pasture with electric fencing and hung out all her tack to dry around the campfire. Her three horses, Roxanne, Cooper and River, all stood steaming from the day’s excursions, munching happily on ground coconut from nosebags hanging around their ears.

We slept under a thousand stars, perched above a canyon that was now serenely still. The sound of horses eating and snuffling nearby lulled me into one of the best sleeps of my life. Not for the first time I wished that I could accompany her all the way to Cooktown.