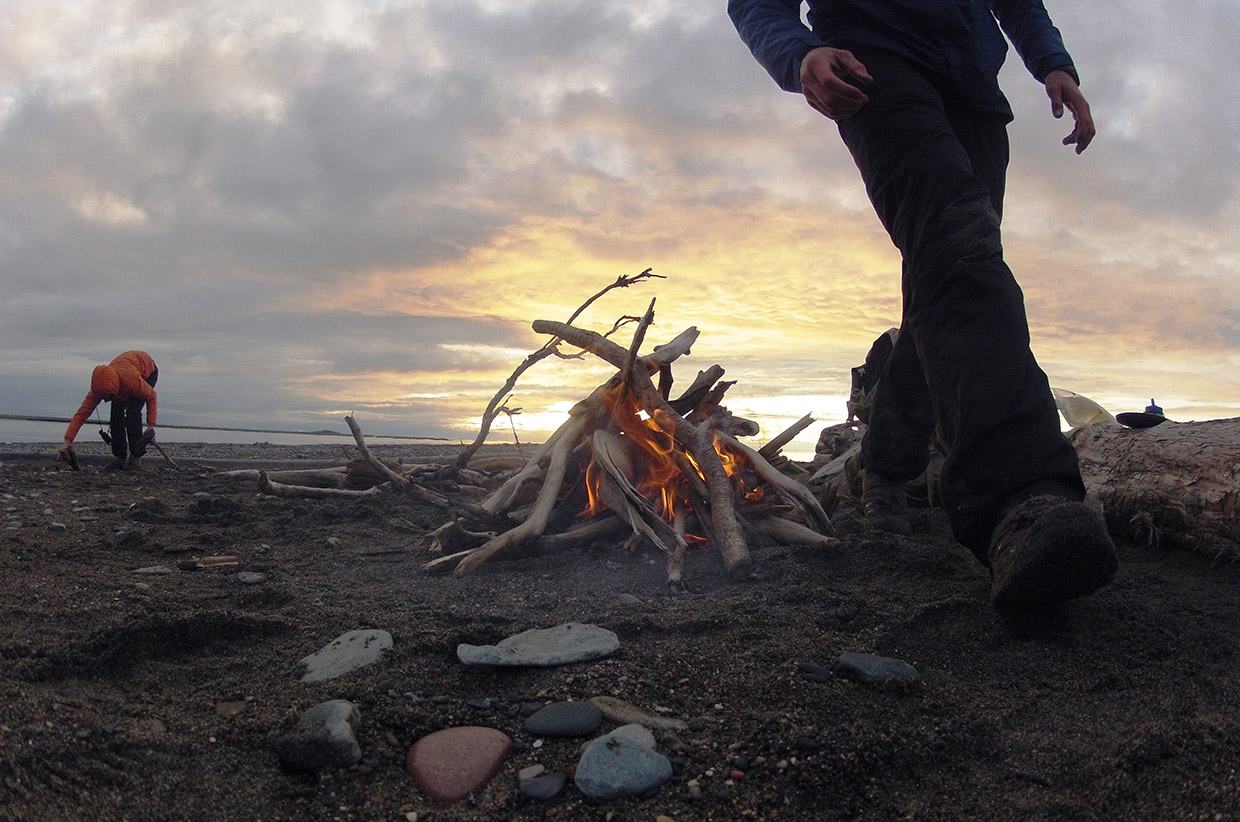 ‘Does the Arctic Ocean count as a real ocean?’ I ask Pat.

I don’t mean technically. I won’t argue with a named body of water. But functionally it’s unlike any other ocean I can imagine. Ice-choked for most of the year. Shallow for miles offshore. Barely discernible tides. Little salt. A flat gray horizon. Perhaps, among lakes, the Salton Sea could claim an equal measure of weirdness. But here there is also endless daylight in summer, endless darkness in winter. There are a hundred kinds of ice but no trees. It’s a landscape that feels little pressure to conform.

Before we left, we weren’t sure whether we’d be hiking or boating this coastline. We could find little information to guide us. We could find little information at all. But packrafts allow us the luxury of not knowing. Each day we can choose whether to walk or paddle. Since we reached the coast, we’ve done equal parts of both. This morning, there’s only a light easterly breeze, and we decide to inflate our boats to take advantage of the tailwind. In the sunshine, the small waves seem benign, and we watch for belugas as we paddle toward deeper water. Flocks of male eiders and long-tailed ducks stream by, their contrasting black and white plumage flashing against the water. The shore grows increasingly distant, but I think I can make out several caribou grazing on the tundra. I’m happy to be here today, on this strange ocean, in a world that will always be foreign to me.

It takes only half an hour for us to realize we have made a mistake. Even before we’ve noticed a shift in the wind, the waves begin to stack higher and tighter. The water changes suddenly from gray to green as we drop off an underwater shelf into the main outlet of a nearby river. The wind blows chop toward land as the river pumps fresh water out to sea. Our rafts bend and bob in the confusion. 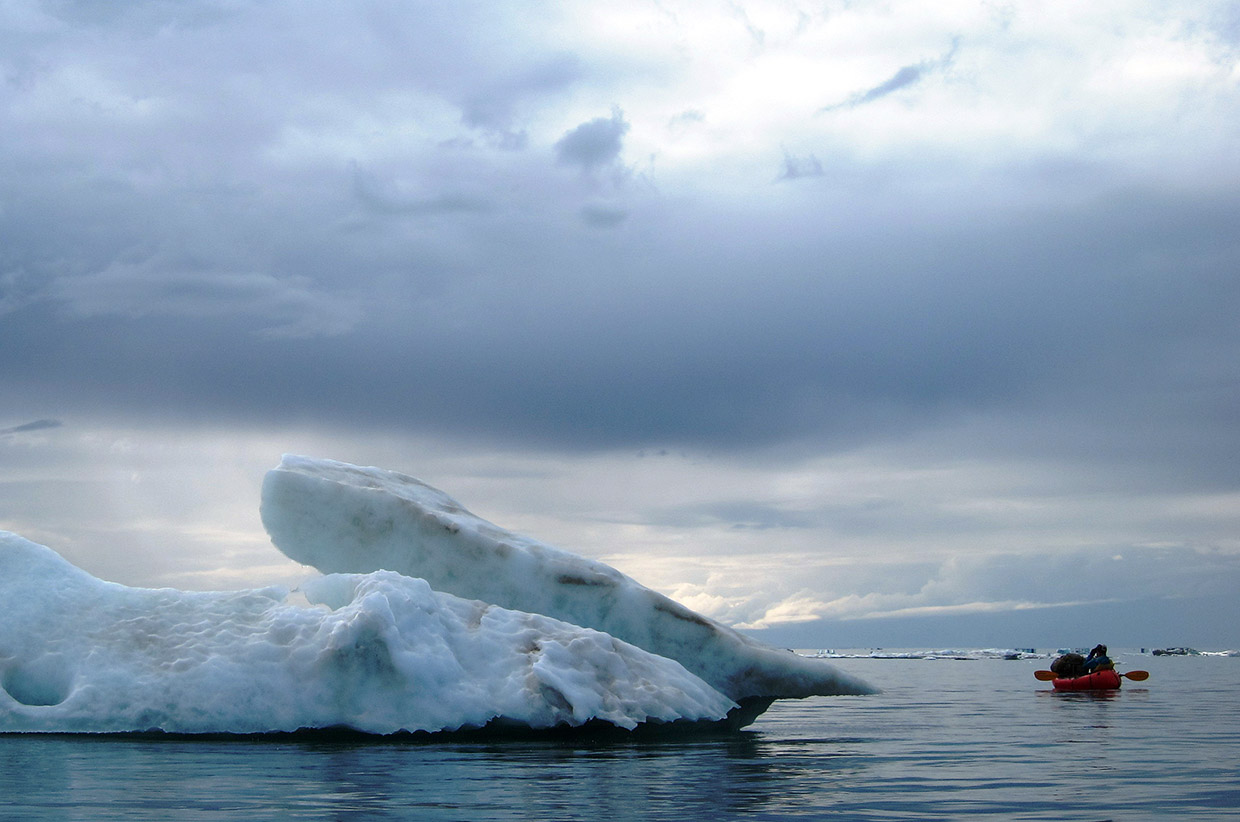 I tighten the straps holding my pack onto the bow of my raft and secure the few loose items in my cockpit. Cold seeps through the raft’s thin rubber hull as seawater presses against my legs. I try to move from my core to conserve energy, but soon I’m paddling any way I can to stay afloat. We’ve worked ourselves more than a mile offshore and we must somehow make it back. We angle our boats in the direction of land, waiting for breaks in the larger sets. One stretch of shoreline shimmers white; chunks of sea ice have stacked up along a narrow strip of beach. I try to ignore the nagging fact that the mud bluffs ahead look to plummet directly into the surf. Will we be able to get out even if we make it to land? Or will we be ejected by steep cliffs and jumbled ice? Shh, I say to myself out loud, Just shut up and paddle. I focus on the task at hand, pausing only long enough to relieve some of the tension building in my muscles and joints. I flex and unflex my hands, shrug my shoulders, and will my cramped hips to relax. The wind is blasting now, sucking the heat from my torso and blowing strands of hair into my eyes.

Between waves, I sneak glances at Pat, paddling twenty feet to my right. Each time he looks more confident than I feel, riding high over the crests of the waves, shooting me an occasional smile of encouragement. We travel this way, side by side, for what feels like hours. When an especially large set rolls through, I panic as my paddle twists underwater and threatens to pry me out of my raft. Just as I manage to find my balance again, I look to Pat for reassurance. Instead I catch his eyes as they widen in surprise, then shock.

Parallel to the surf, he’s caught in the trough of a five-foot wave. He braces to the left, leveraging his paddle against the water to stay upright. A few seconds later, another wave passes under him and he braces to the right. This time, he can’t get out of it. In slow motion, he lists over until water begins to pour into his boat. Then he topples into the icy sea.

In 2012, Caroline Van Hemert and Patrick Farrell traveled from Bellingham, Washington to Kotzebue, Alaska–a distance of nearly 4000 miles–by rowboat, ski, packraft, foot, and canoe. This extraordinary journey followed a road-less, trail-less route through some of the most spectacular wild landscapes in North America. Along the way, Caroline and Patrick rowed the length of the Inside Passage, crossed the Coast Mountains on skis, hiked and packrafted the length of the Yukon Territory, paddled among icebergs of the Arctic Ocean, and traversed the Brooks Range. All in six months and all under human power.

The Sun Is a Compass is available to buy via Amazon. For more information, visit carolinevanhemert.com and follow Caroline on Instagram @sunisacompass.

For more stories from this adventure, read Northern Limits on Sidetracked or check out Volume 14.

Paddle against Plastic Unexplored Territories – An Interview with Kirill Umrikhin