Confronting the Cold Coast – An Interview With Chris Kendall 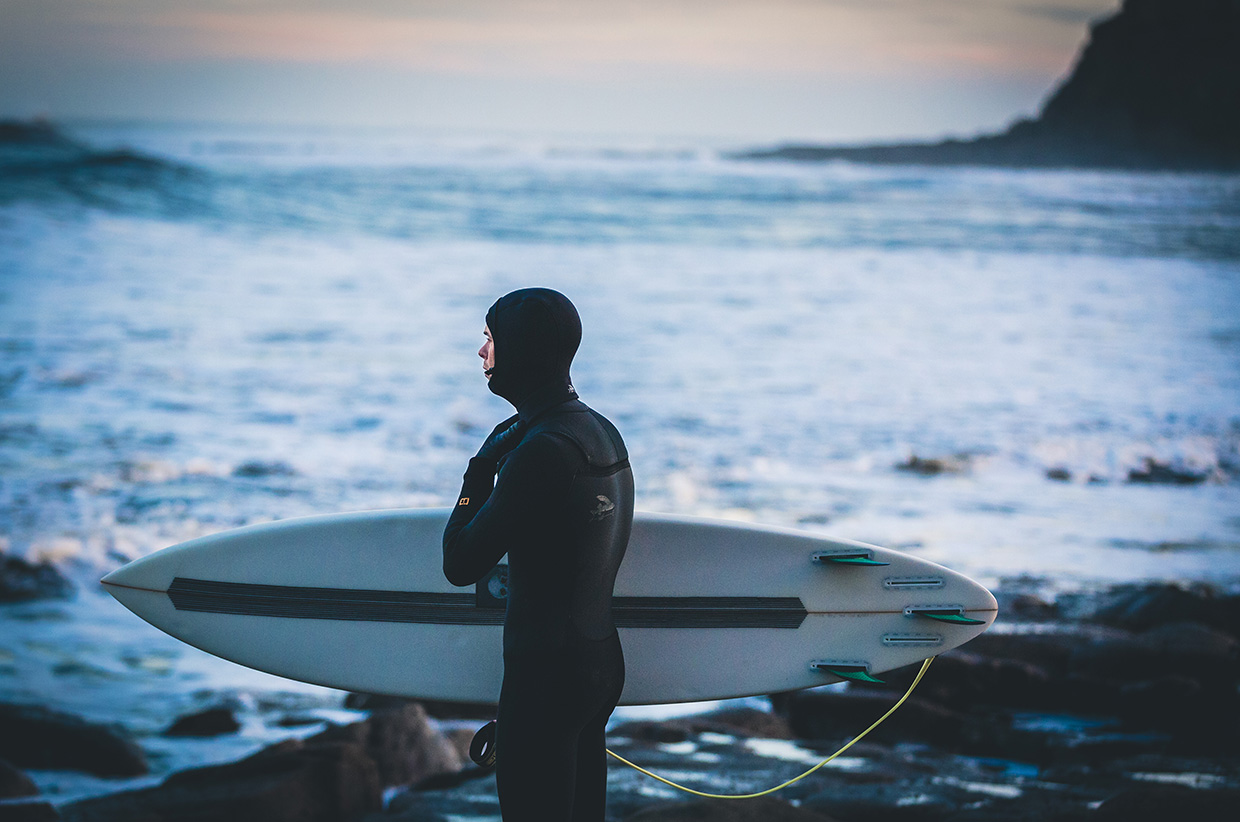 The word surfing usually conjures up images of white sandy beaches and crystal-clear waters, with sun-kissed surfers catching waves into shore. But when Chris Kendall talks about surfing, he paints a very different picture.

Chris is a cold-water surfer, surfing the freezing cold, murky-brown swell off the east coast of England. We spoke to Chris about his story, “Confronting the Cold Coast”, to hear more about how he copes, surfing in conditions that are more akin to Iceland than Cornwall.

Sidetracked: Yorkshire isn’t the first place – even in England – that you’d associate with surfing. How did you get into surfing in Yorkshire?
Chris: I got my first taste of surfing on a family holiday, in Cornwall. My dad had tried bodyboarding in the same area as a child but never had the chance to pursue it. He wanted to get back on a board and introduce us to the ocean.

We borrowed some boards from a friend, just those cheap polystyrene ones, and loved it. Well, once we got wetsuits anyway. I don’t know if I even caught a wave in my first session because of the cold. By the time summer came to an end, surfing was our passion, and we didn’t want to stop when the winter months came.
It wasn’t until I’d bodyboarded for a few years that I decided to try stand-up surfing and ever since I’ve flicked between the two. It’s nice to be able to mix it up and tailor the board I’m riding to the waves on hand and how I’m feeling.

What was it about surfing that you really enjoyed those first few times you surfed? And what was it about it that you loved so much to keep it up?
When you first start, I suppose it’s a totally new feeling. Bodyboarding puts you so close to the wave, laying down, separated by only a thin piece of foam. As a pre-teen, even though the waves were small, it was hugely exhilarating. You never really lose this because you can keep pursuing bigger waves. Now, the ultimate feeling is getting barrelled and as other commitments grow, these are the conditions I seek out as much as possible. 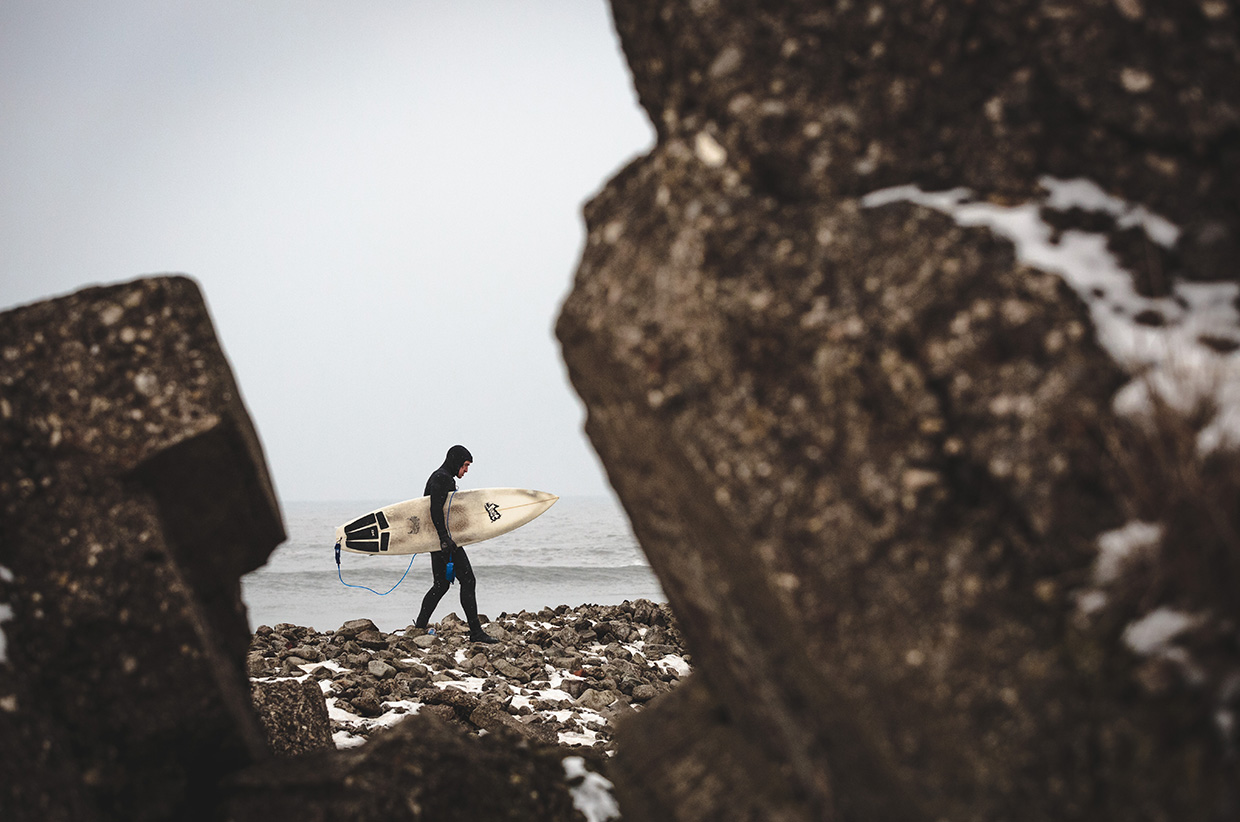 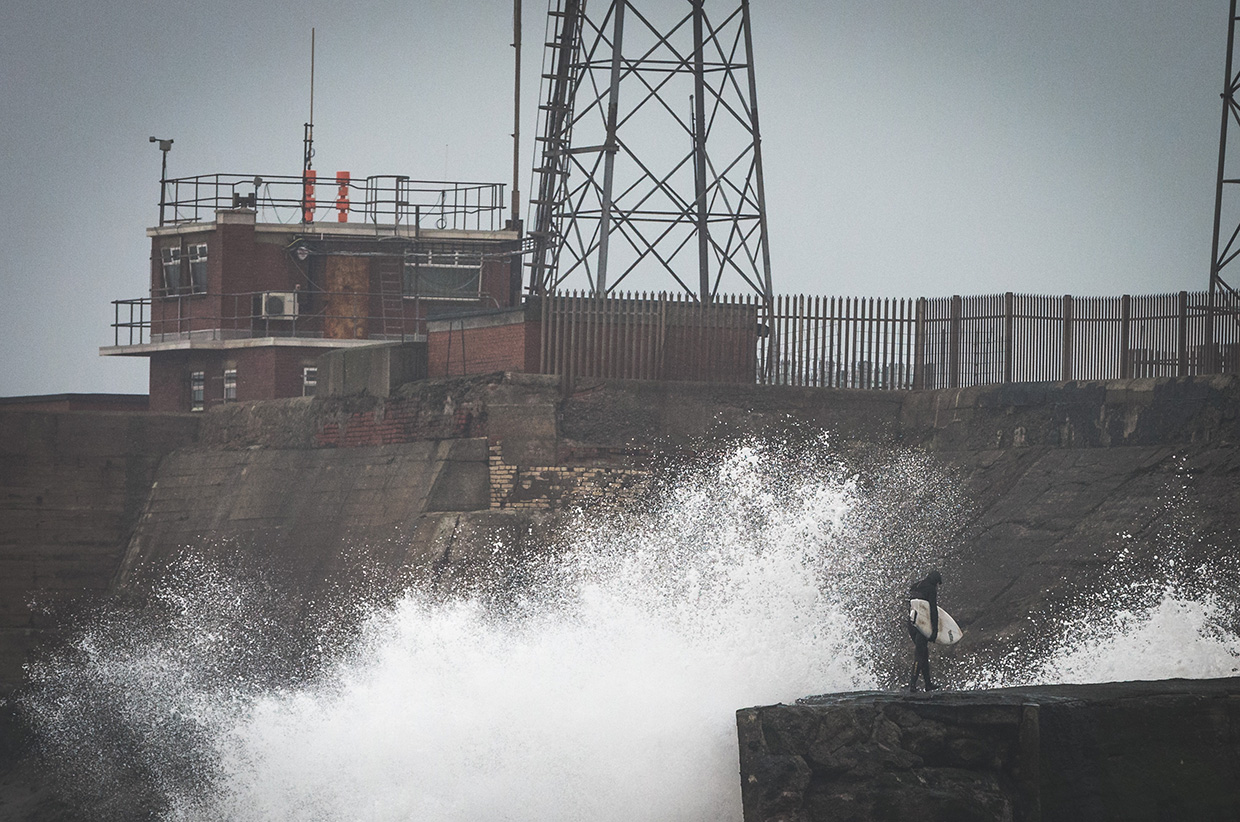 Can you tell us more about the waves that you can catch on the east coast? How do they compare to other parts of the country/world?
The east coast has a lot of reefs and points which work well on northerly ground swells, but these are typically a winter phenomenon. In fact, they often arrive as a result of the same conditions which bring snow to Britain. So, to get the best surf, you must face the worst weather!

You only have to look at England on a map and even a surf novice could guess why the waves on the Yorkshire coast are different and inconsistent – the North Sea is tiny by comparison to the Atlantic or Pacific which generate huge waves that travel for thousands of miles, ordering themselves into row after row of clean lines before breaking on the coast. The best swells for Yorkshire surfers come from far up north – between Norway and Greenland – this being the furthest a swell can travel before it reaches our shores.

I’ve always thought that the waves in general are more powerful than a lot of places though. We used to holiday in Cornwall yearly and we’ve surfed a few spots round there, but I always remember noticing when we came back how much more powerful it was on our coast. We used to theorise about why it was, and in honesty, I‘m not sure exactly why – there was a lot of bro-science involved in the investigations – but I always liked the idea of the continental shelf taking some of the power out of the waves on the south coast. I’m sure there must be something in the ocean topography that contributes to it.

You mentioned that the water on the east coast is more similar to Reykjavík than Cornwall. How do you cope in waters of that temperature?
If the surf is good you barely think about it. You’ve just got to commit. If you dilly dally putting your wetsuit on, that’s when you get cold. And if you don’t put your head straight under when you get in, it’s much worse.

The coldest air temperature session was somewhere in the minus teens but the actual session, once we were in the water, wasn’t too bad. One of the worst sessions I’ve had wasn’t particularly cold, but I was very new to surfing and I kept my head out of the water for as long as I could. When my head finally went under, I got extremely cold and just couldn’t warm up. It was a lesson learned, just face the cold head on from the start – take the ice cream headache and crack on.

Are there any specific surfing sessions that stick out in your mind as being particularly challenging? What is the most challenging surfing session you have experienced?
For me, paddling and fitness is a struggle. Although I’ve always been relatively fit, enjoying hobbies which require physical exertion, I’ve never been a ‘gym person’ so I’ve always been on the lower end of the fitness scale. Sessions involving a lot of padding have therefore always been a bit difficult and the most challenging sessions for me are those when it’s hard to paddle out. Continually being pushed back towards shore is the most demoralising thing ever. Strong tidal flows and rips can also make things hard and some sessions are spent constantly paddling just to keep yourself in the same spot, to catch the waves you want. 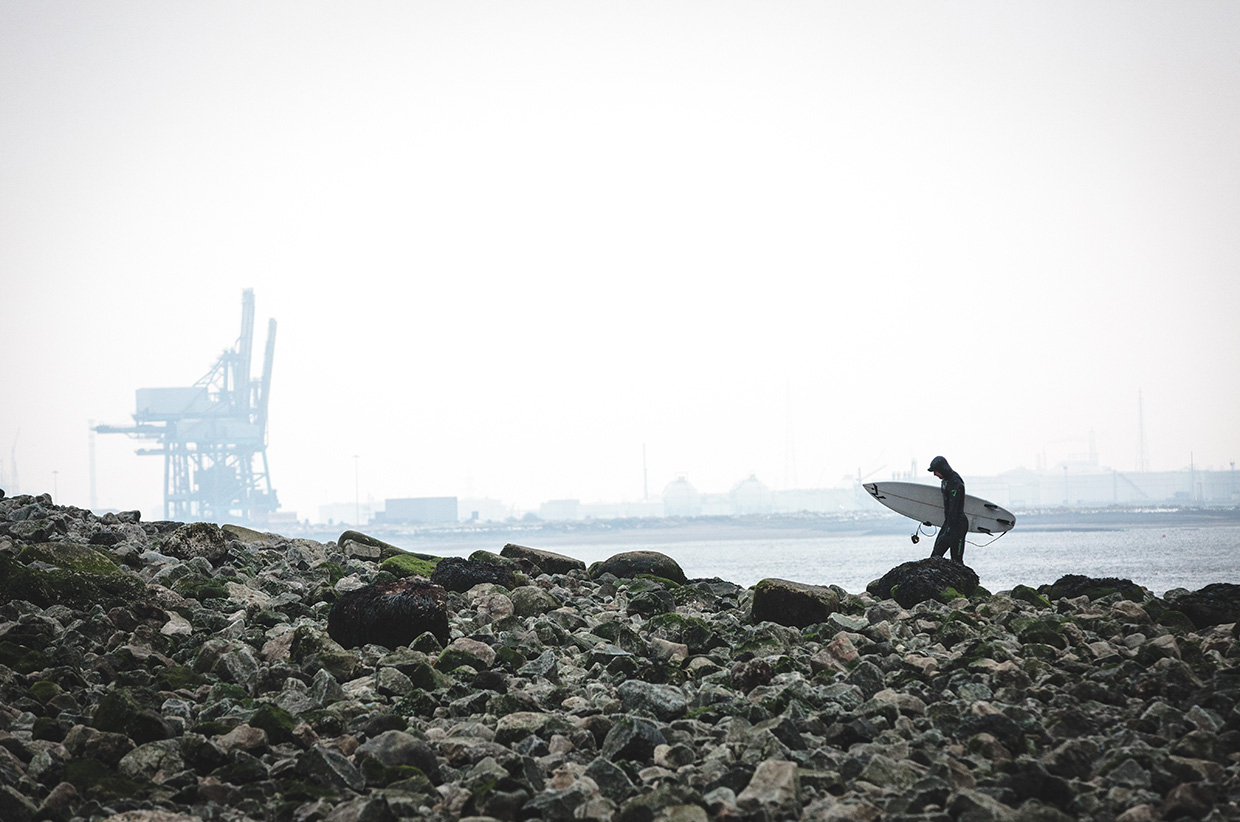 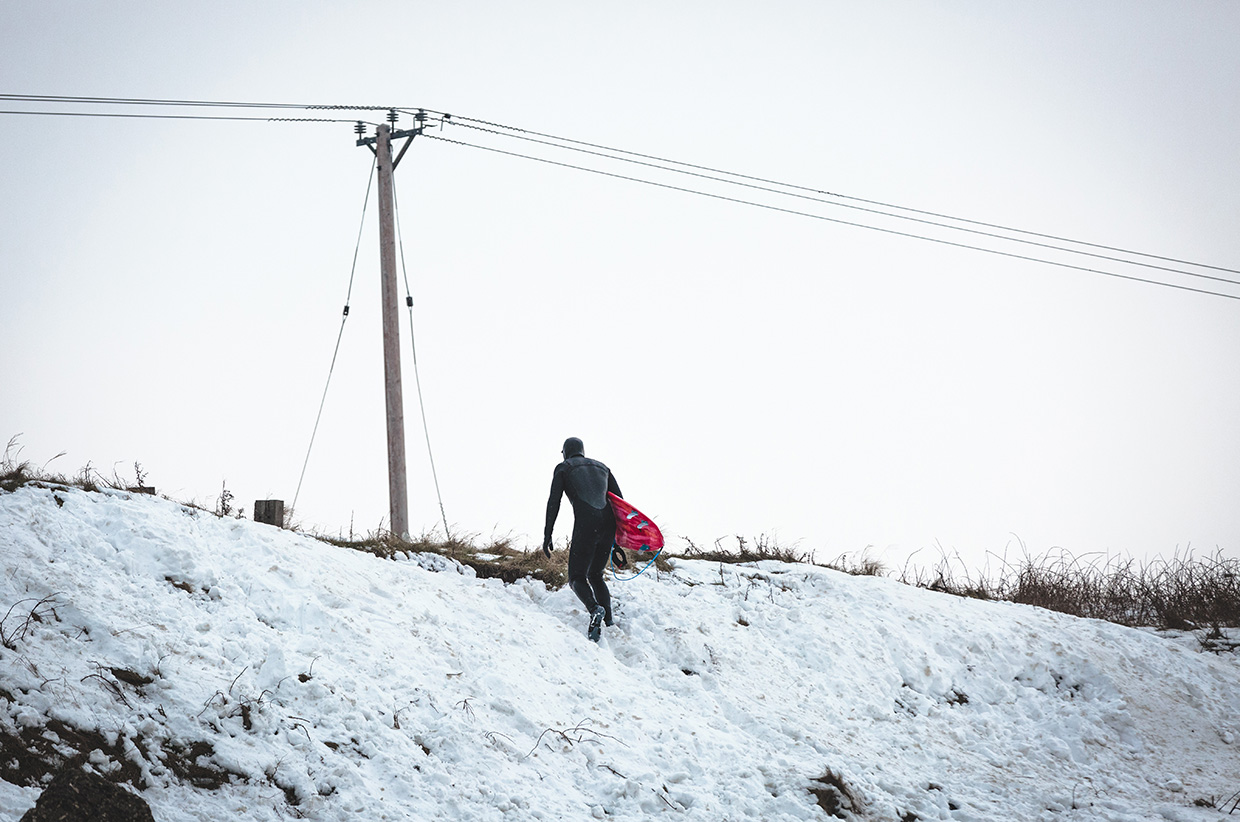 You mentioned that you are tested mentally and physically through your surfing. Which do you think you struggle with more?
Both the mental and physical difficulties are challenging at different times on different days. I can remember sessions when I’ve been really scared, where it’s been a real mental battle to get out and stay out. Sometimes though you thrive on the adrenaline. One of the hardest things to overcome is a bad wipe-out.
I suppose at least with physical adversity, if you’re really that bothered you can do some workouts at home, like weights or swimming, to help build strength. The mental stuff is much harder – or at least I thought that for most of my life.

Thinking about wipe-outs and overcoming bad ones, what is the most ferocious wipe-out you’ve experienced? What did it feel like?
The one that stands out to me wasn’t when I was surfing the most violent waves, where you get ‘rag dolled’. That feels a bit like being in a washing machine. The more you panic and struggle, the quicker your breath goes.

My worst experience was at my favourite break. The surf was an entirely manageable size and I was having a blast. I was paddling out to try and get over a set of waves and got lucky with the first wave as it broke in the perfect spot. I managed to duck dive and pop up on the other side trouble free. I remember hooting and hollering as I came up and the adrenaline rushed through my body. I was no longer nervous about the next wave in the set as it approached on the horizon. But when I realised it was going to break further out, my confidence waned. I tried to duck under it and remember getting pushed and held down. As time passed, I began to panic. The well-rehearsed habit of relaxation went out of the window and I kicked for the surface. I remember going up and up for what felt like an age and when I eventually surfaced, I gulped in as much air as I could, but the next wave was already right on top of me. I had to dive straight back under. After that I was ready to get out. It scared me and set me back to surfing much smaller waves for a good few months.

What do you think you’ve learned from your surfing experiences on the east coast?
Surfing has shaped my life. I started at a formative age and it shaped many of my decisions since, from what jobs I was prepared to do, to what other hobbies I would pursue. The main thing that is directly attributable to my passion for surfing is a deep appreciation for nature which pervades everything I do. 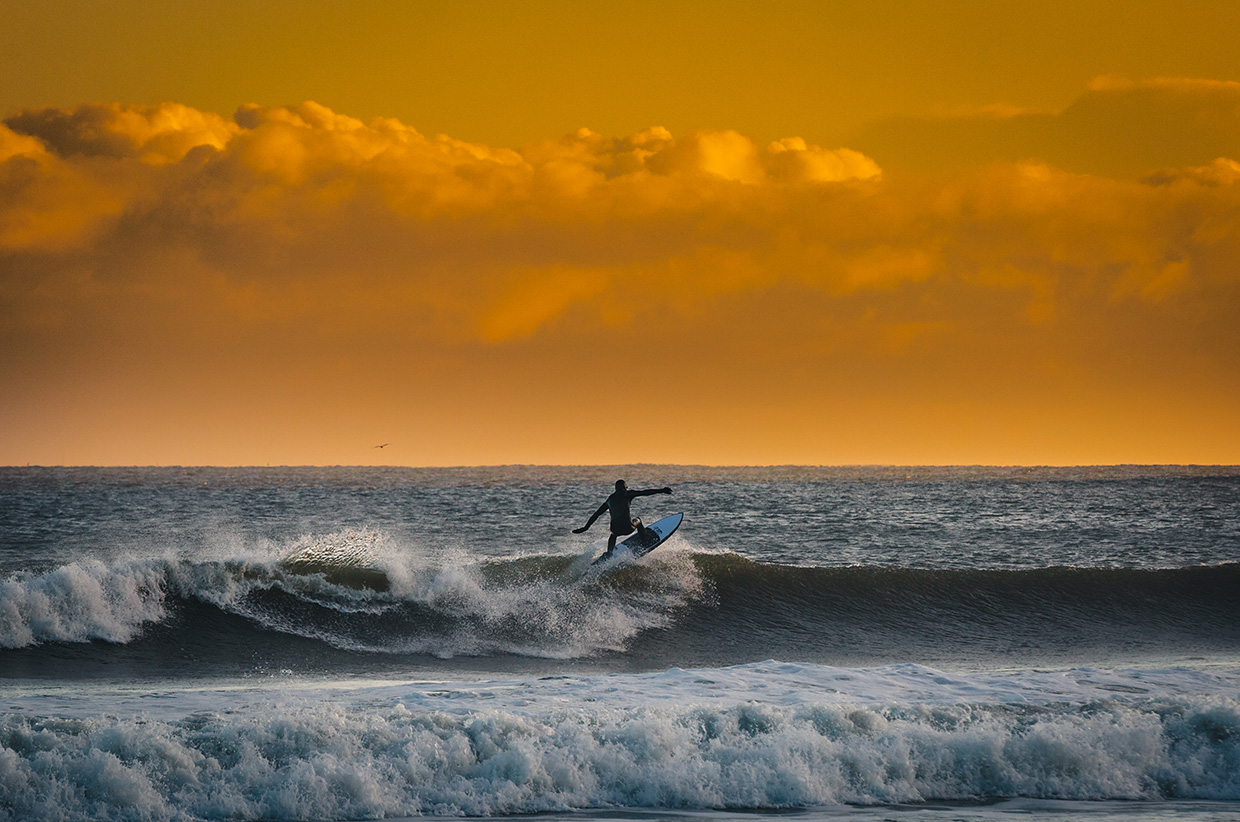 If you never surfed on the east coast of England again, what would you miss most about it?
My favourite beach. It’s underrated, particularly in certain conditions, but I’ve had so many good sessions there at all stages of the tide in all directions of swell. And it’s just a beautiful place.

Mostly, I’d miss the power of the waves and the way this place can take swell conditions which are less than perfect and make them super fun. Although I’ve surfed waves which are just as much fun in other places, I’ve yet to find somewhere that is so versatile, with so many different faces. There are not many beaches that produce waves as good as those here.

To read more about Chris’ experiences surfing on the east coast of England, click here.

Chris Kendall is a 29-year-old photographer from Yorkshire with a lust for life and a desire to explore his existence as deeply and thoroughly as possible. He met his first love, surfing, at the age of 12, and it has been an obsession ever since, permeating into every facet of his life and guiding many of the decisions which faced him in his formative years. You can find Chris on Instagram @chriskendallphotography

Against the Wall – Tommy Caldwell Lure of the North