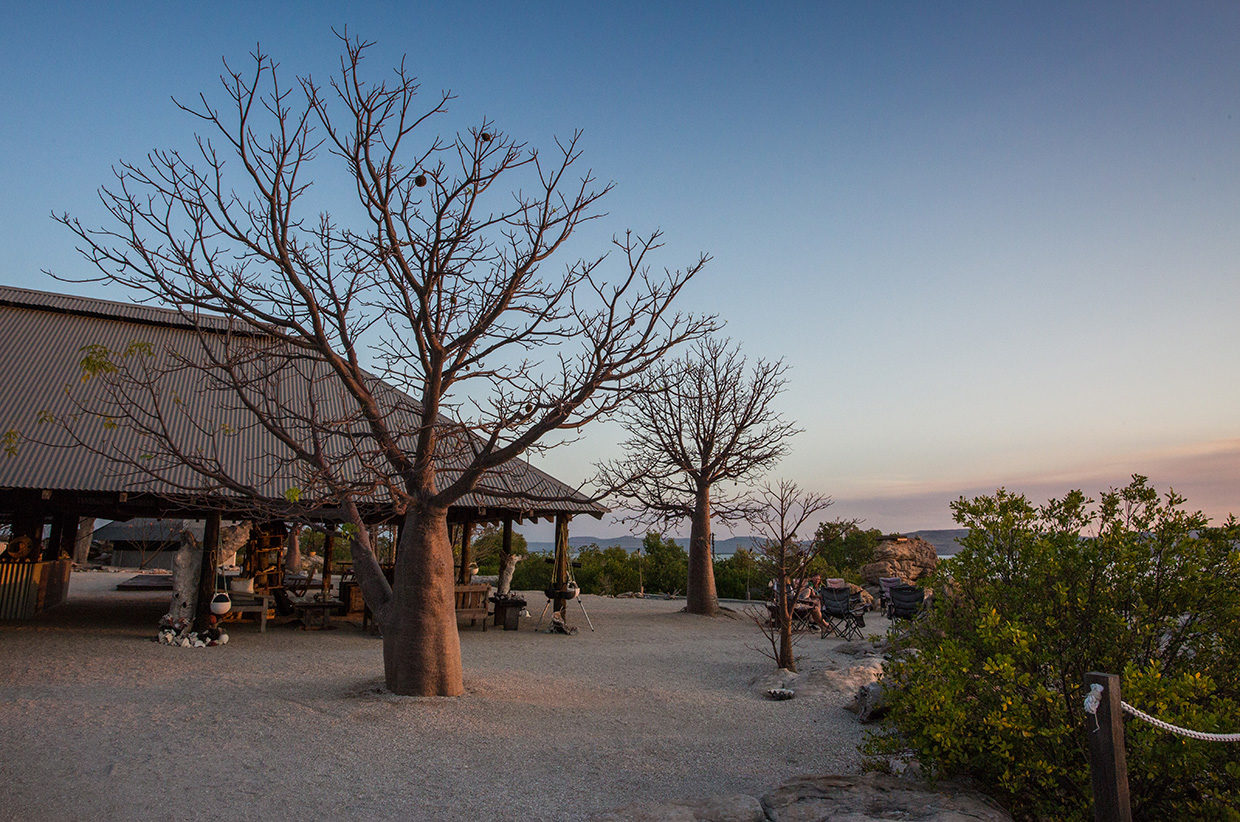 The clock is just stretching past 09.00, and I’m propped up on the wooden kitchen counter of Kimberley Coastal Camp, scribbling notes as I listen to Jules tell stories while she prepares omelettes for the late risers. The temperature is already cresting 32°C. Sweat trickles down the back of my neck and I swipe it away, unwilling to stop writing for any longer than it takes for the pen to briefly leave the paper. Fuelled by coffee earlier in the morning, my mind is clicking away as Jules talks easily, her hands busy with the camp’s breakfast. I pause long enough to glance down at my tattered, bare feet dangling above the sand floor of the kitchen.

It’s just another day at Kimberley Coastal Camp. At this remote outpost, barefoot or flip-flops (thongs, as they are called in Australia) are de rigueur. The kitchen has two walls and a sand floor and cracking a ‘stubby’ – a can of beer – before midday is not unusual. There’s a long table where communal meals are held, a firepit under the stars where stories are exchanged nightly, and a casual vibe that feels like home.

It’s when Jules starts talking about Ollie, a large olive python who used to hang out in the kitchen, that I remember this isn’t like any other camp I’ve visited. The fact that the crystal blue waters just metres away are off-limits to swimming thanks to a healthy population of saltwater crocodiles and sharks is another reminder that we truly are out in the middle of nowhere.

Located in the remote Kimberley region on the Admiralty Gulf, Kimberley Coastal Camp lies not far south of Timor. The nearest town of reasonable size is Darwin, a two-hour flight away. There’s no airstrip near the camp, so flying boats or bush helicopters are the only way in – not a bad entrance, crossing over the harsh northern brushland and startling turquoise waters of the Timor Sea.

Witty, bohemian Jules and her husband Tub have made their year-round home at Kimberley Coastal since 2014. Before her life in the Kimberley, Jules was trained as a chef, then went on to become a professional singer in Australia and Asia for 17 years before returning to her trade. She opened up a café housed in a 1936 Zephyr train car in the mining town of Port Hedland. It was there she met Tub, who was running his own marine construction business in the town. Tub had come across Kimberley Coastal Camp during his travels in the region and, as often seems to happen in the big corners of the world, life worked its magic and the couple soon found themselves owning the remote outpost.

Jules smiles, glancing around the kitchen as she reaches for more eggs.

‘I think I’ve always done things outside the square,’ she admits. It would take a woman as strong and innovative as her to run a quality kitchen in the middle of the bush, but it’s a challenge she seems to relish. The Kimberley seems to have a way of capturing people’s hearts and souls. I’m beginning to understand why.

It’s an outdoor lover’s paradise, but it’s also a place with its own rules. 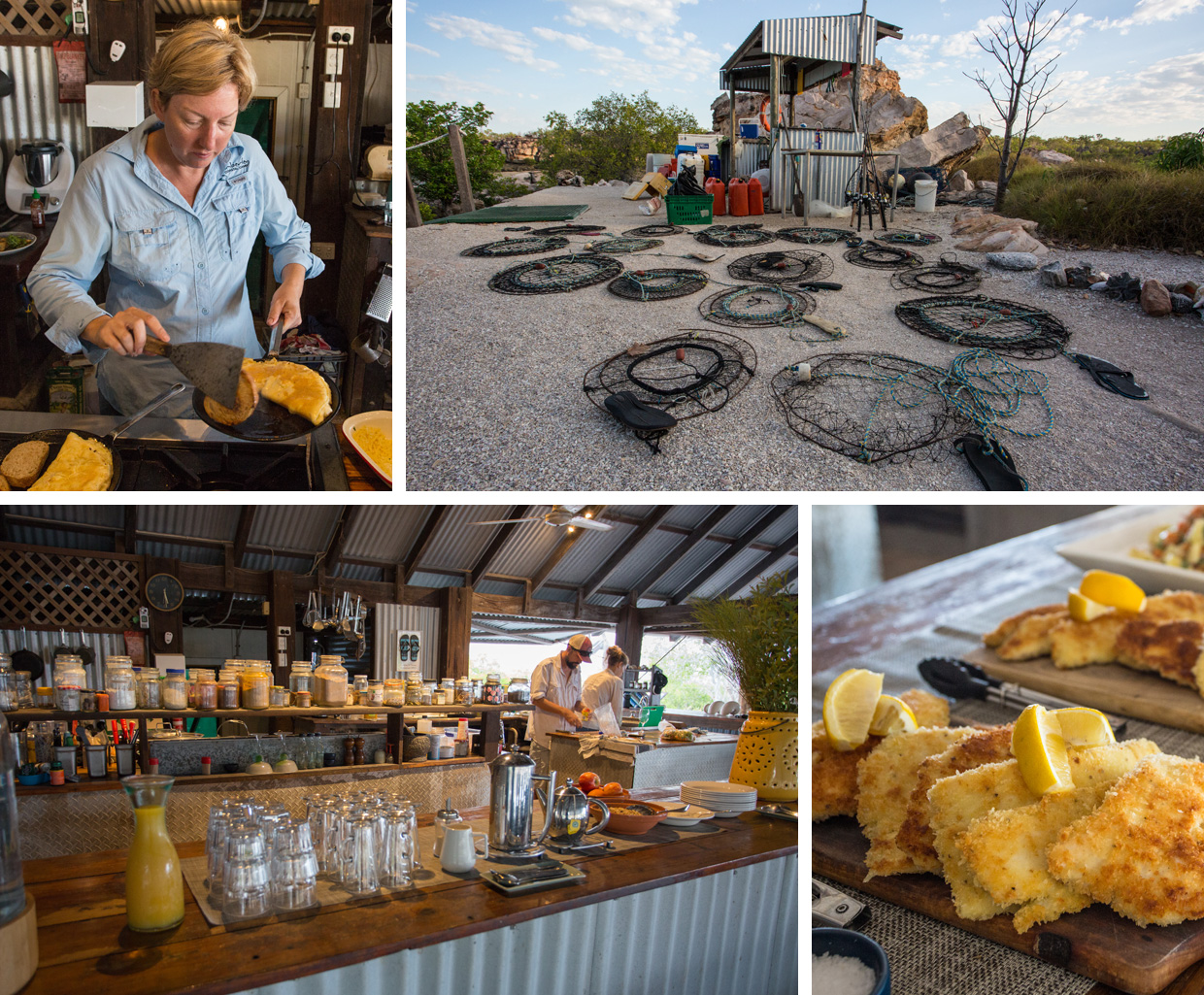 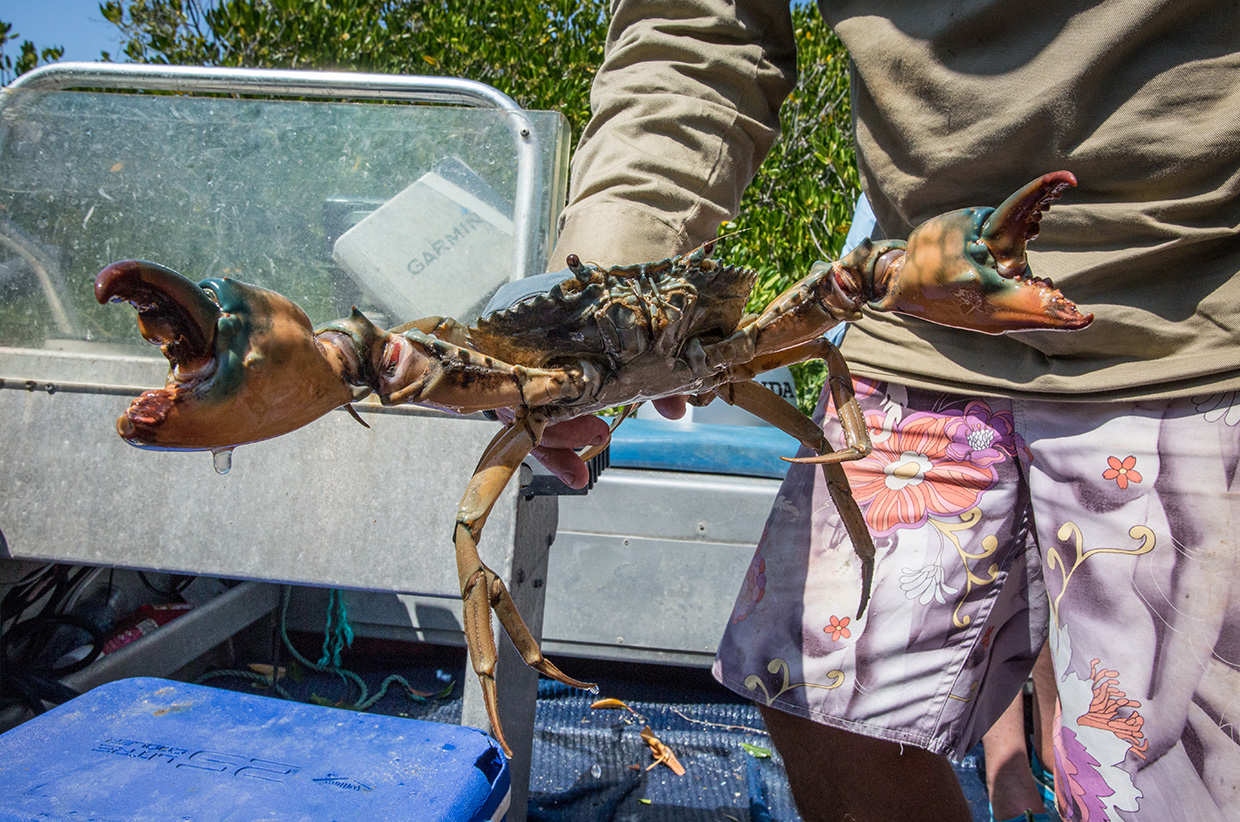 Among those rules is self-sufficiency. The Kimberley is a remote region with impressively hot temperatures and a barren landscape. With supplies expensive to procure and transport to camp, Tub and Jules depend on the land for a good portion of their food. They collect water from a creek behind the camp that flows only during the Wet Season, storing it in large tanks until the next Wet. It’s sweet and clean and clear, and tastes as I imagine rainwater should. From the fish in the sea to the crabs that muck about the mangroves, the sea offers a food-rich landscape if one knows where to look.

It’s all a balance. During a morning hike to a treasure trove of aboriginal artwork in local caves, Tub shows me how to eat green-butted ants that taste like citrus, sharp and fresh. The mud crabs we find are both earthy and sweet. The comforts of modern life are still around; on my flight in on the Grumman Mallard, the old plane carried two pilots, myself, 30-odd cases of beer, and 12 bags of concrete into the camp. We sip champagne around the campfire at night, nestled under a sea of stars as we trade stories. It’s not hard living, but it’s a hard place.

It’s a fact I’m readily reminded of one morning as we’re gathering the day’s dinner. We’ve gone to ‘get a feed’ as Tub says; I’m in the dinghy with the chatty figure of Tub and new friends Alex and Pretoria, dropping crab traps into slots in the mangroves. Tub has rigged an old thong at the end of each crab trap line. Once the trap is baited and placed, we throw the thong hard into the mangroves, ensuring it’s snared before moving on to drop the next trap. The heat is quickly climbing and the sea breeze has vanished in the mangrove jungle, bringing out the legion of resident insects. We snug the dinghy up into the mangroves, seeking shade and telling stories while we wait for the crabs to find the traps.

I ask Tub what drove him to leave behind a successful business in Port Hedland and move out here. It’s a feat many would daydream of, but few would be willing to make it a reality.

In the midst of juggling his former business, he had a stroke. The doctor told him that he could tick only two of three boxes on a form, and he had to give up one of the three. Did he smoke? He had, once upon a time. Did he drink? Yes, and stopping was ‘not gonna happen’. Did he have an inordinate amount of stress in his life? Yes, as a businessman in the marine construction business it was part of the game.

And so stress it was. And here he is. 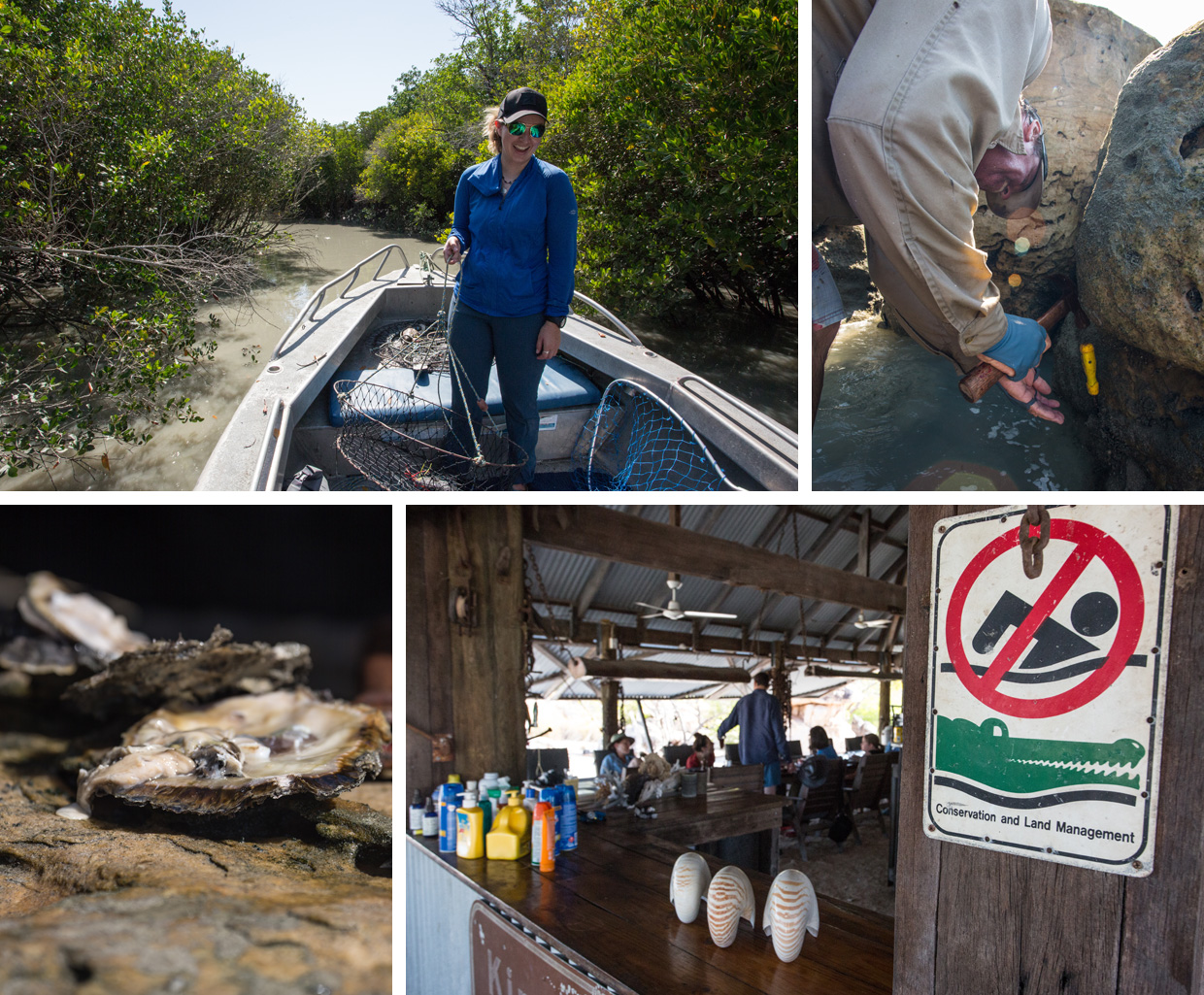 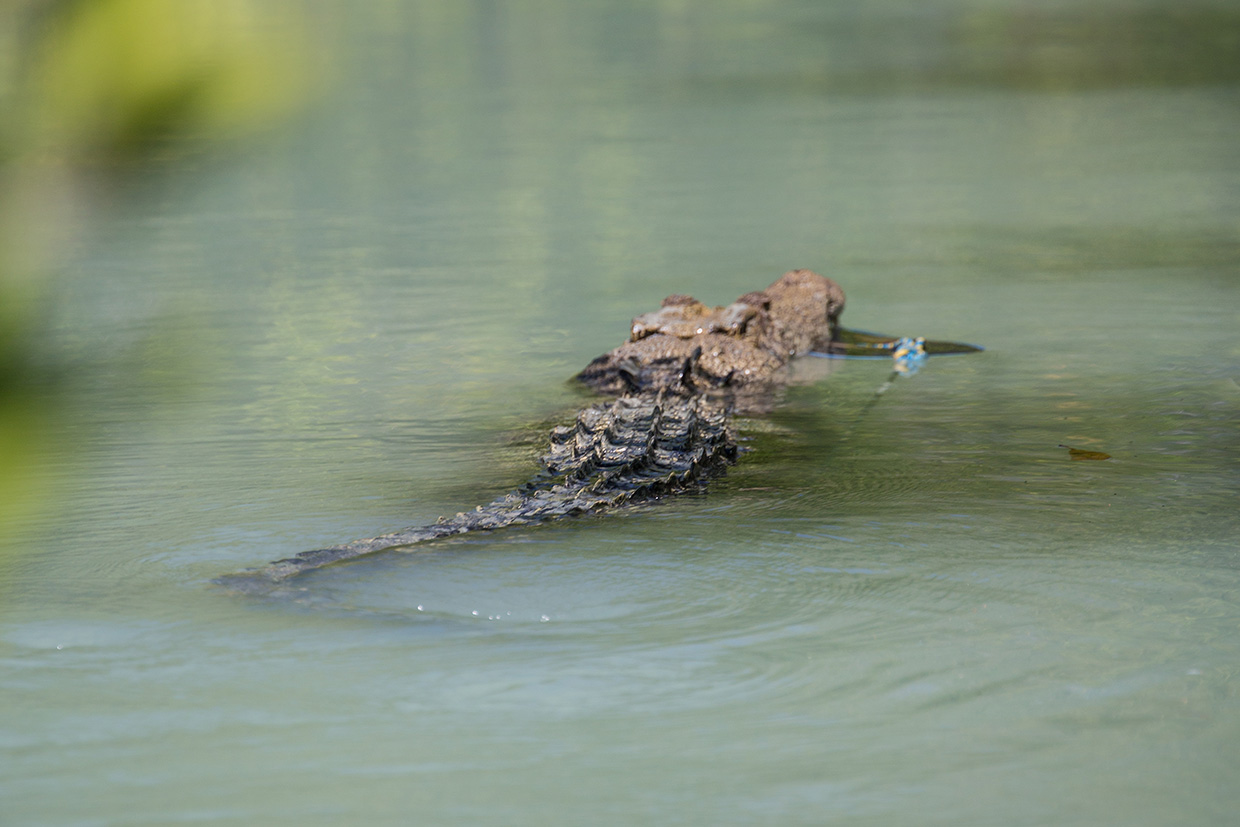 We nudge back through the mangrove channel, pulling up the ropes to see what we’ve caught. Things go smoothly until midway through. The thong is missing from its place on the mangroves, as is the line and – apparently – the entire trap. Tub grows quiet, watching the surrounding waters. Within a minute, he spies the languid form of a large saltwater crocodile swimming back up the slim channel, a black thong proudly in its mouth. Suddenly the boat is spinning and we give chase.

Tub leans forward, shouting, ‘Give me back my fucking thong! Come back here you bastard!’ The croc gives a swirl of its tail and sinks into the murky water.

Alex laughs, noting we’re literally up a creek without a paddle, chasing a crocodile for a thong. I giggle aloud and bring the camera down from my eye for a moment. It’s a sentence I never thought I’d hear.

The crocodile dives into the mangroves, and we enter a game of cat and mouse (at times, I’m not certain which part we play). Tub wants his crab trap back, but eventually the croc pushes deep enough into the mangroves that we can’t give chase, and we realise it’s a lost effort. The mangroves ring with laughter, curses, and snorts as we head back up the channel to check the other pots. You win some, you lose some.

The crabs are hungry, and before long we have a cooler full of crustaceans ready to be cooked up for supper back at camp. Meandering through the dense mangroves, Tub suddenly lets up on the motor as he spies something floating in the middle of the channel. Something black and small and beaten.

It’s quickly retrieved, the crocodile nowhere in sight. We reel up the line to find the trap still attached, though a little worse for wear.

In the Kimberley, sometimes you win well after the fact. 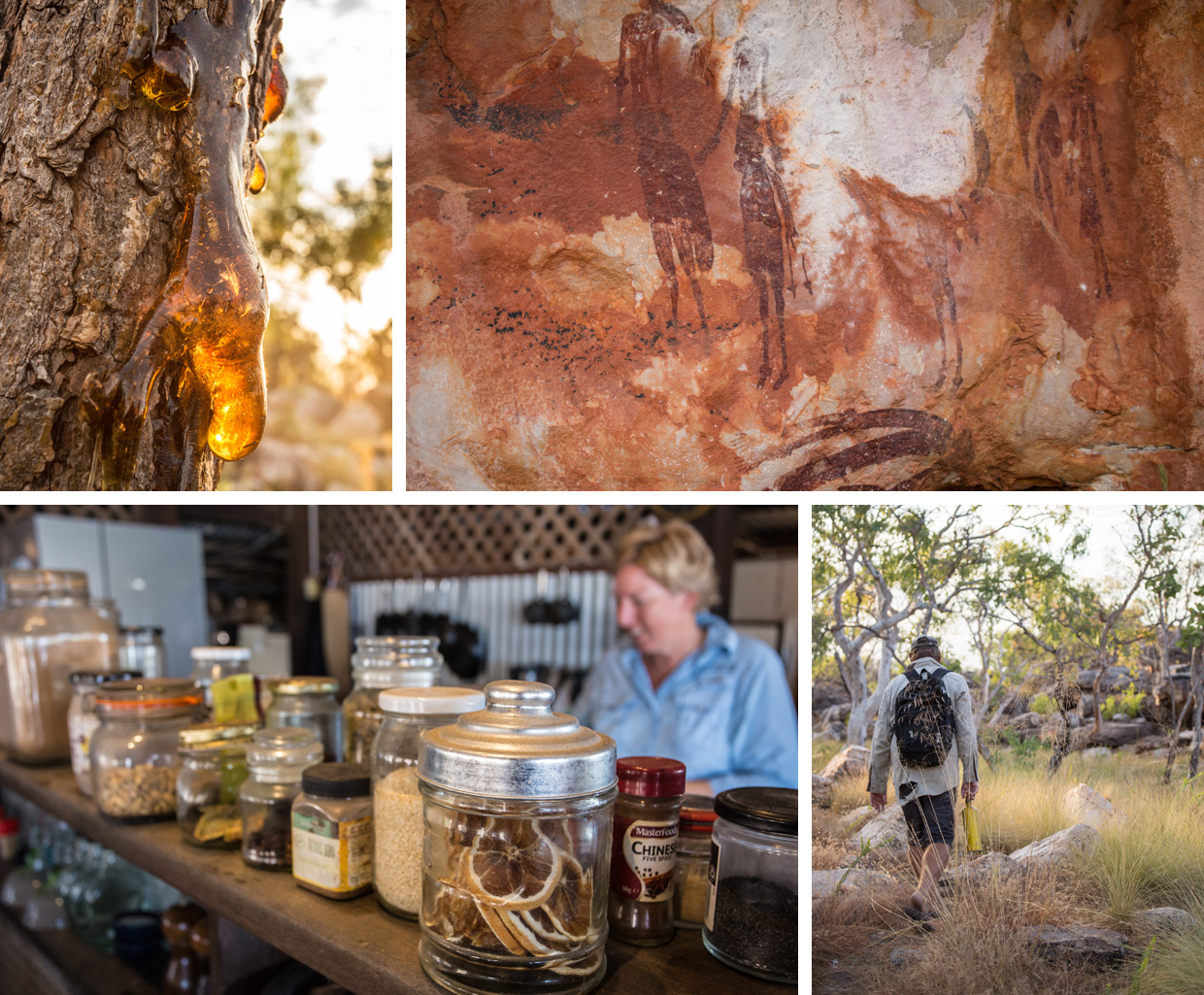 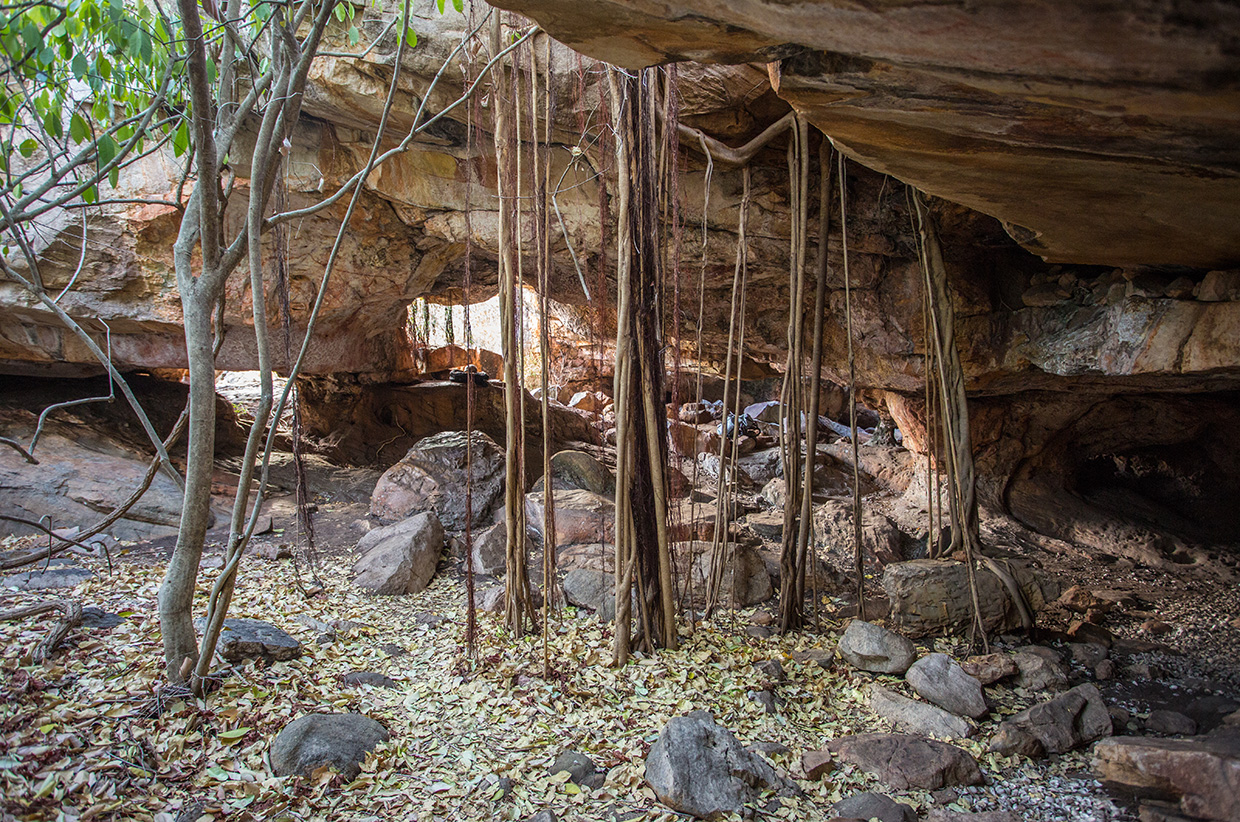 Camp life is driven by the sun. Sunrise in the Kimberley is around 05.00; since that’s the coolest part of the day, mornings often start with work. The sun heats the place quickly, building throughout the day, but sets around 17.30. The early darkness brings a comfort to group meals at the long table, and an intimacy to nights spent trading stories around the campfire. Most nights it’s early to bed, for it most certainly will be early to rise. Taking a night-time shower outdoors is a treat, the stars wheeling overhead, and I make friends with the little lizard who likes to hang out by the outdoor toilet at night, catching insects by the dim light ensconced in the rock.

Each day brings new challenges. Despite the lack of resources and many things we tend to consider ‘normal’, Jules works wonders in the kitchen. So much so that, at the behest of guests and friends, she is about to release her first cookbook, titled Cooking in Thongs. It’s going to be a coffee table-style book, 380 pages and hardbound. Filled with 80 of her recipes, the volume tells the couple’s tale, including a smattering of camp stories. For, really, what is good food without a story behind it?

When the time comes to climb back into a Grumman Mallard freshly arrived from Darwin, I pause, licking the salt spray from my lips as I look back over my shoulder at the camp, perched on the rocky hillside above the water. This is big, rough, hard, unforgiving country filled with hard people. But it’s home to some of the best people you’ll ever meet, cooking some of the best food you’ll ever taste. I smile, and turn back to climb through the hatch into the plane.

Jess McGlothlin is a freelance photographer and writer based in Missoula, Montana. while on assignment in the past few years she’s learned how to throw spears at coconuts in French Polynesia, dodge saltwater crocodiles in Cuba, stand-up paddleboard down Peruvian Amazon tributaries and eat all manner of unidentifiable food.
Website: jessmcglothlinmedia.com
Instagram: @jess_mcglothlin_media