We speak with Andrew Cotton about what it takes to surf a big wave, injury, his relationship with Nazaré, and coming back to find happiness at sea.

Everything in life boils down to physics. Waves are no exception. The journey of a single wave doesn’t even begin on this planet. Our sun, 93 million miles away, kicks out solar radiation in the direction of Earth. When that sunlight strikes the air molecules in Earth’s atmosphere, it causes heated air to rise. This rising air leaves room for colder, denser air to fill in the gaps: wind, tearing at the surface of the sea, creating large waves of energy that travel through the ocean. The deepest lows of air pressure create the grandest waves, but the process takes time and distance. The waves within a storm are usually messy and chaotic, but they grow more organised as they propagate away from the storm – and faster waves outrun slower waves, eventually forming regularly spaced lines of energy. As the waves push through, they cause ocean water molecules to dance away, transmitting energy as they go (remarkably, the molecules themselves barely move; it is the energy that crosses continents).

For the most part, that swell will continue around the world unobstructed until it begins to meet landmass. As the sea becomes shallower, the friction of the ocean floor slows the bottom of the wave down as the surface continues apace. As the wave slows it grows in height and eventually the speed differential causes the top to overtake the rest of the wave and break.

And at that point, depending on a thousand other variables from geology to local weather to tides and time of day, you may find a surfer trying to ride out the last few seconds of that dissipated energy, eking out joy in the tail end of a 93-million-mile journey – paddling furiously to match the wave’s speed, carving majestic lines across its face. 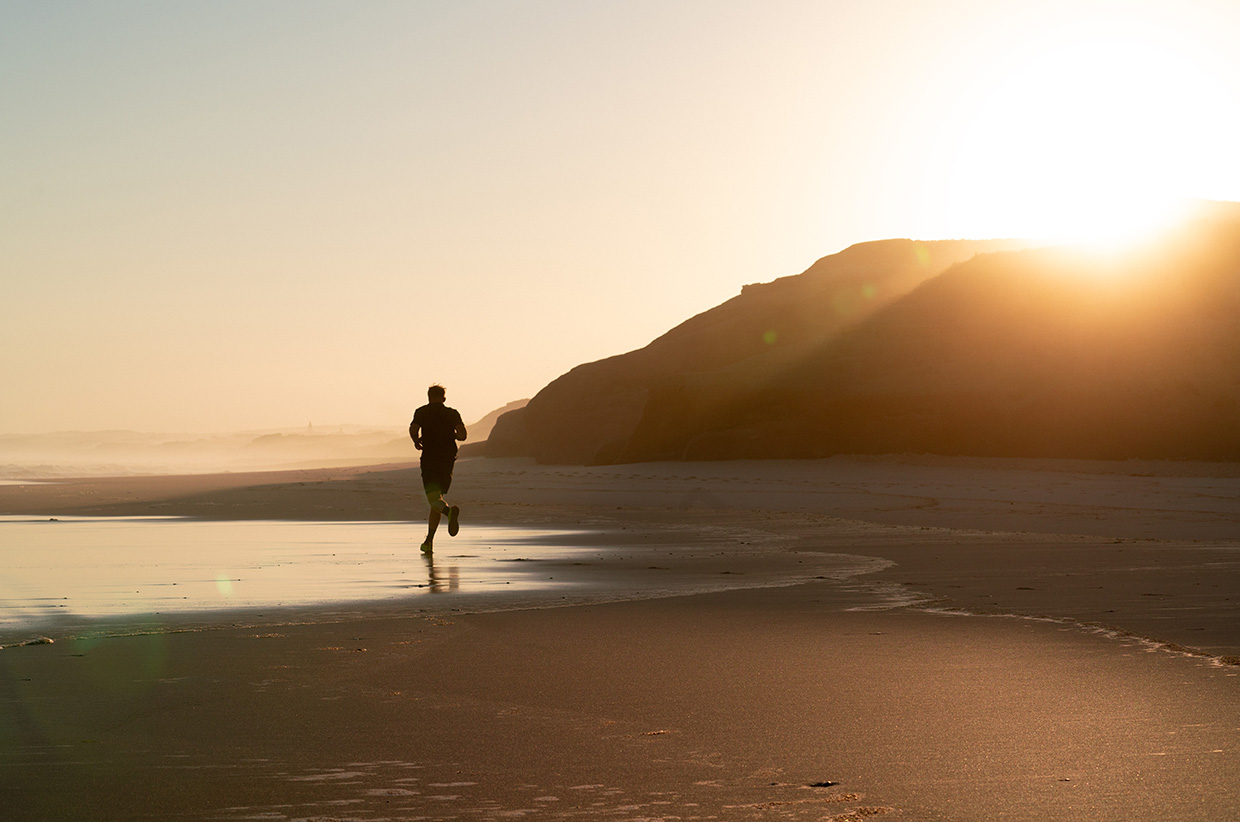 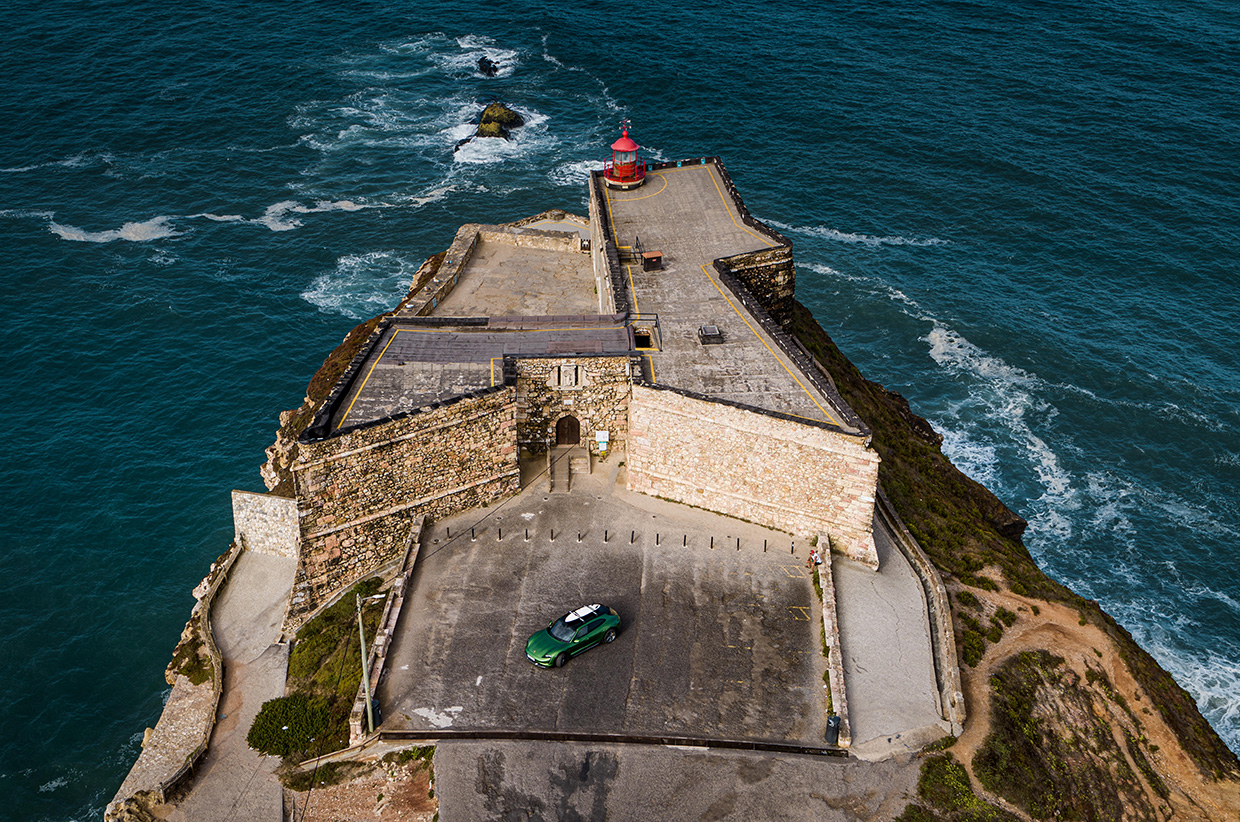 ‘One of the things that makes Nazaré so special is this underwater canyon that runs out into the sea,’ Andrew Cotton tells us. ‘Because it’s so deep, the swells don’t slow down as they approach land. This means that when they complete their journey and reach the coast and break, the waves are huge; the biggest in the world.’

Andrew Cotton is one of a small elite group who venture out to surf these 100ft monsters. It’s the Himalaya of the sea – rarefied, dangerous, beautiful and, yes, mountainous. His personal history and professional surf career are utterly entwined with what was a sleepy former fishing village just 10 years ago. From almost giving up on the dream to discovering his potential on big waves and being part of the birth of the scene at Nazaré, to breaking his back in a wipeout there in 2017 and his return to the surf less than a year later, Andrew’s life has followed waves both literally and metaphorically. Given its danger, what attracts him to the extreme edge of surfing and how did he end up being one of the few big-wave pros out there?

‘All I ever wanted to do was surf, right from the first time I tried it at home in North Devon, with my dad sitting and watching from his car with a newspaper. After school I got a job at a surfboard factory. I started sweeping the floors, but quickly moved on to shaping, glassing, and sanding the boards. The factory would be in full production all summer, then close over the winter and we’d all go travelling the world to surf. I completely loved it. I was never good enough to be a pro surfer and to be honest I didn’t enjoy competitions, so this was the closest I could get to the pro way of life.

‘I did that for ten years, and I guess I realised it wasn’t sustainable forever. My dad pressured me to get a trade, so I trained to be a plumber. I was barely surfing and I hated it. I needed a way out. Big waves were it. I knew from years of travelling that, in general, the bigger the wave the more I was able to hold my own. I might not have been as skilled as the pros, but I had the head game.

‘It genuinely feels like the rest is fate. I got a call from Garrett [McNamara, American big-wave pro] who asked me for help scouting out Nazaré before it was known. And, somehow, over the following years, it became my life and profession.

‘I think I love the adventure of it all. And that attracts me the most, doing stuff that no-one has done, pushing myself. I love being forced to ask myself the question “do you really want this?” when I’m on the jet ski in the middle of this maelstrom, waiting for the wave, thinking about my line. I love that internal conflict; I guess it’s about knowing when to battle your instinct and when to trust it.’ 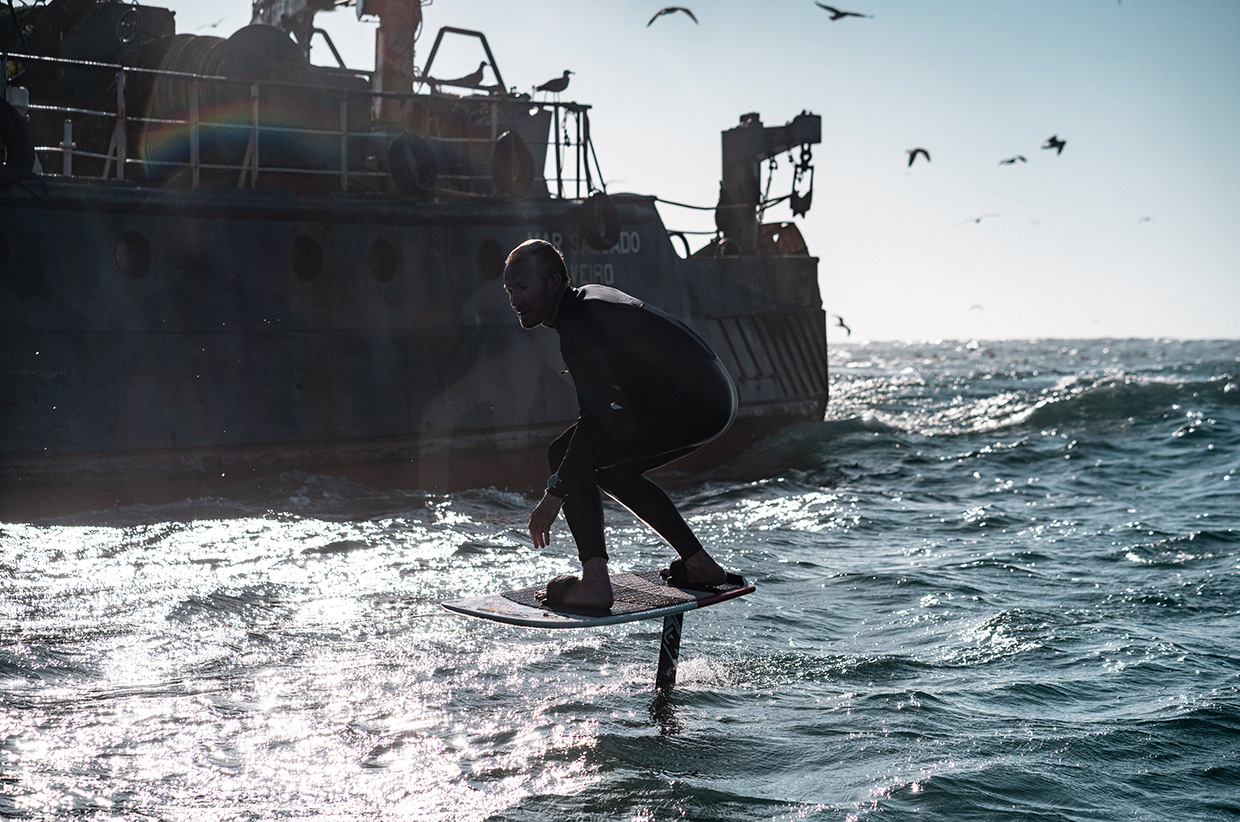 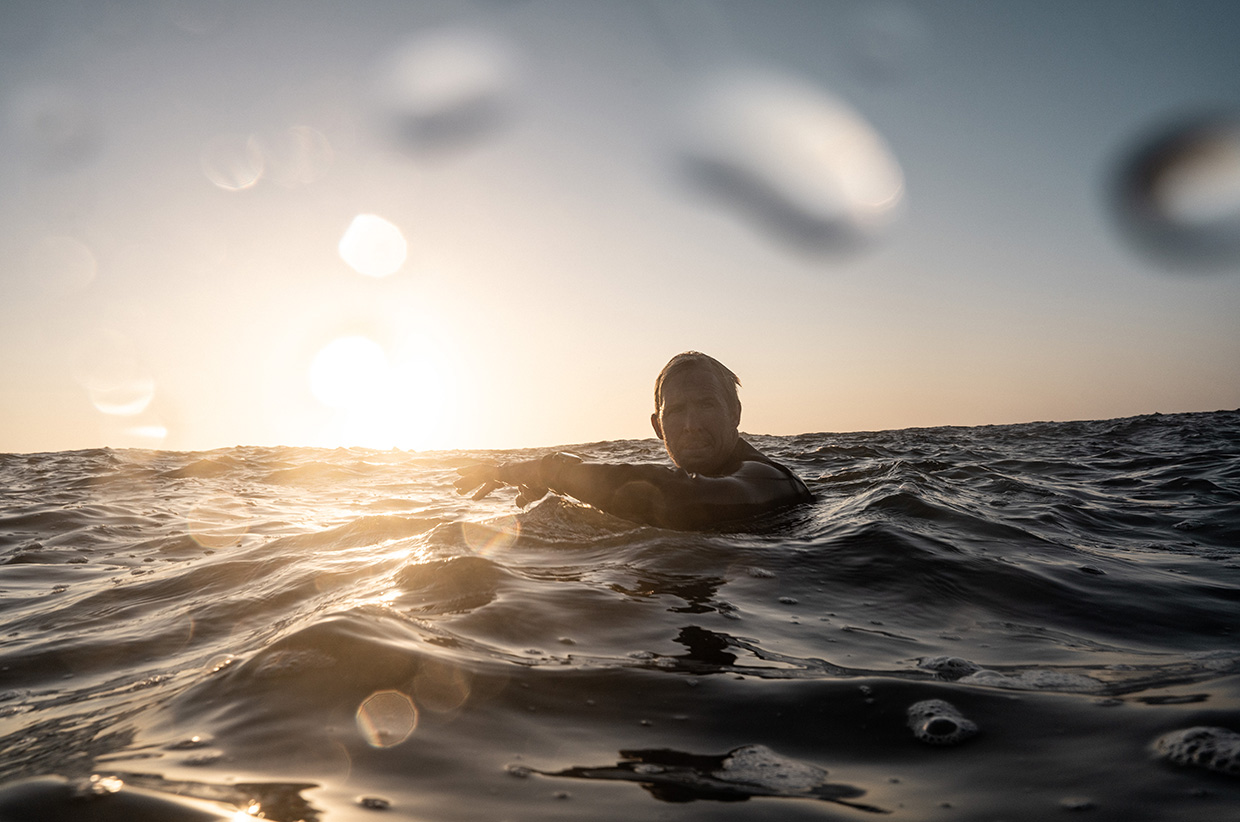 We look out over Nazaré’s small late-summer swells as we talk, and it feels a world away from the life that Andrew is describing.

‘I love just being in the sea, whether it’s playing about on small waves, or even just swimming. It’s August now – in just two months it will be the season. We could be back out in giant swell again and I get a personal wave of excitement just imagining it.’

It’s easy to define professional sportspeople by what they have achieved: their biggest, fastest, farthest. To do so forgets the time, dedication, and passion spent reaching that point. It also separates out the sheer love of their chosen way of life. Andrew clearly has the love and passion, but he also puts in the hard hours.

‘It’s all about preparation and preparing some more. The ocean is so unpredictable – you’re never gonna control the swells, or the wind, or the tides. You don’t know when there’s going to be the wave. That wave of the day, year, or the wave of your life. But you can control things like your equipment, your fitness, and all that builds confidence. So for me being fit, being mobile, being injury-free, are fundamental. It makes me ready.’

Injury is something that Andrew is familiar with, from a ruptured ACL (three times!) to concussions and then the crushed L2 vertebrae that was the result of his wipeout in 2017. Yet he is still drawn back to the sport.

‘It’s like you get on the train, you’re boarded, and you just can’t get off. It’s a one-way ticket and I don’t want to get off. Some of my mates have – they’ve reached the point and it’s like, “OK, I’ve had enough”.’ At every station, at every point I thought I might just get off, something has kept me going. There’s been either a sponsor or a project that came along just at the right time. Every time I’ve thought “maybe I should pick up my tools and get a proper job again”, something, either by luck or fate, has kept me on the surfing train.’

Andrew is open about his end goal: surfing the biggest wave ever. It’s a concept that he clearly battles with, going back and forth, aware of the ego that drives him to chase a record, but always returning to more fundamental truths about himself.

‘There’s lots of different types and styles of waves. There’s the wave that you’d draw in your textbook as a kid, the dream waves, and I’ve been lucky enough to surf them. And then there’s, yeah, the really, really big waves. I realise that I am in this tiny group of people who can even think about surfing them. Then there is the very biggest. And only one person can have surfed that. I hate missing any swells, never mind the biggest. I always, always want to be out there. So, I guess I’m always chasing the adventure. And searching for the record is one way to achieve it.’

Andrew ponders this point for a while longer, before replying to himself – to ‘the ego’, as he would put it.

‘The great thing about surfing, though, is every single wave is different. There will always be adventure, long after I’ve got off the train.’

You get the feeling that Andrew Cotton will never stop surfing. Long after his pro career has ended, long after his body is eventually too worn out to contemplate the days that Nazaré is pumping, he’ll be paddling out to his local breaks in North Devon, still hunting out that buzz and sense of flow that attracted him to this world as a child and has come to define his life to date. 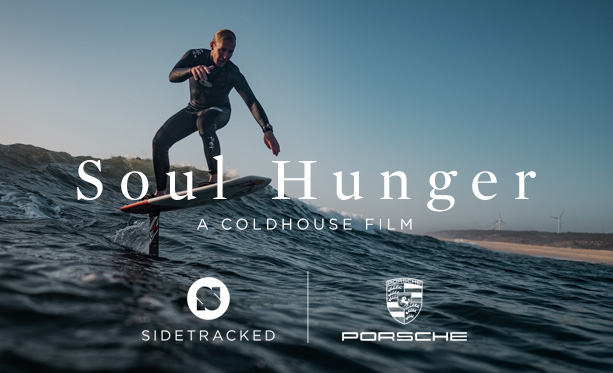 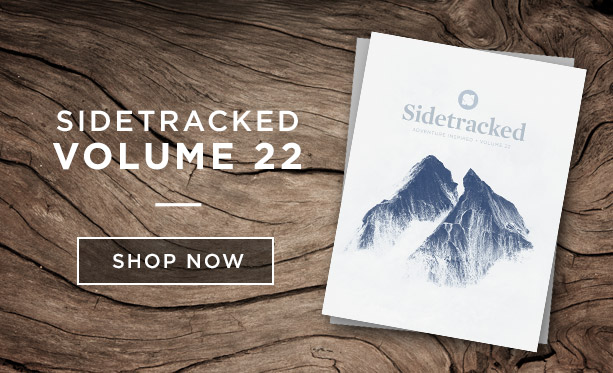