On the ITERA Expedition Race 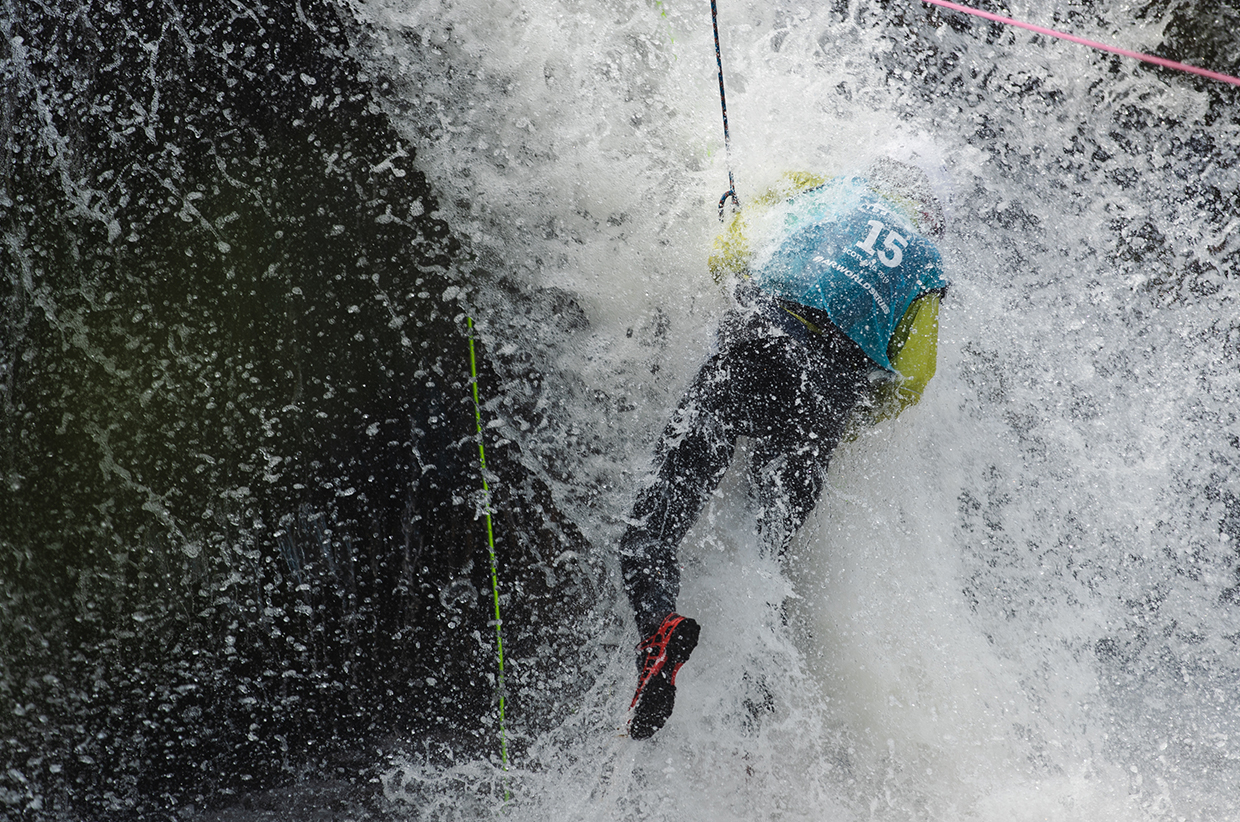 Words and photography by Johny Cook

The ITERA Expedition Race across Scotland is one of the most gruelling challenges. Johny Cook follows the teams, some of who find comfort in the most unexpected place.

In his kilt, the manager of Dunrobin Castle stood a few feet from the start line and lifted his shotgun in the air. Racers leant forward, anticipating the pull of the trigger as they were being nibbled by midges (a taste of what was to come). The gun was fired and the teams headed off, smiling and cheering.

This was the beginning of the ITERA Expedition Race Scotland 2019, where 37 teams of four took on a 565km course with 13,100m of ascent. The route would take them from the east coast to the west coast, then south, and then back over to the east, finishing in Inverness. Teams would do this on foot, via raft, bike and kayak with little to no sleep. Out of the 37 teams, 11 were international. This would be their whistle-stop tour of the north of Scotland.

After the teams finished their 20km warm-up paddle from Dunrobin Castle, they arrived at Glenmorangie Distillery, mostly fresh faced. After a quick change at the transition point, they grabbed their bikes and made their way through the distillery grounds, weaving past tour groups wondering what on earth was going on. From here it was a gruelling 140km bike ride until the next transition. Not far from the final few kilometres of the cycle, I rode from Loch Ailsh to find some teams. After waiting on the fire road above Loubcroy, I found Team Sweco. Of course, despite the rain and midges they had endured so far, the smiles were still there. A few shots of them and I thought I could hop on my bike and get ahead. With fresh legs and a good lunch, I couldn’t catch them for the 5km back to the loch – disappointing for me but impressive seeing the strength they still had after coming to the end of a tough first day. 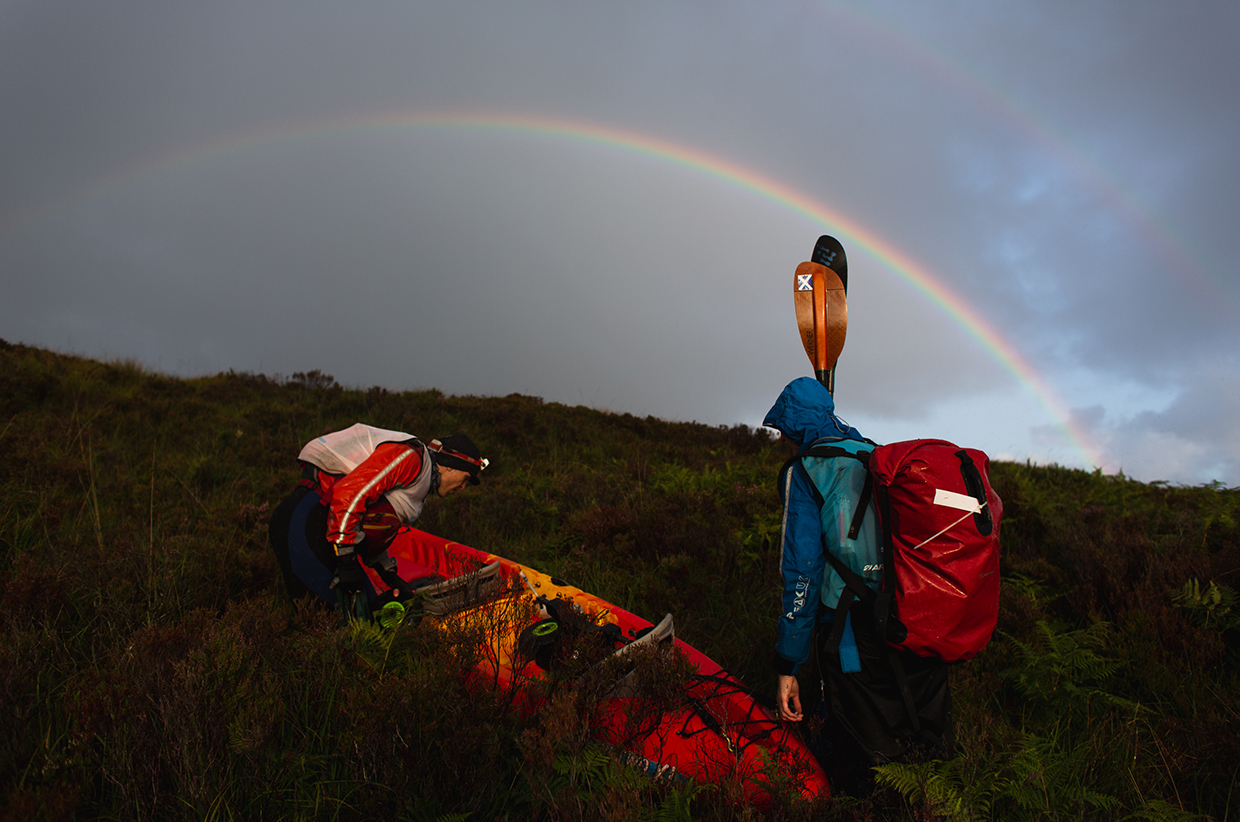 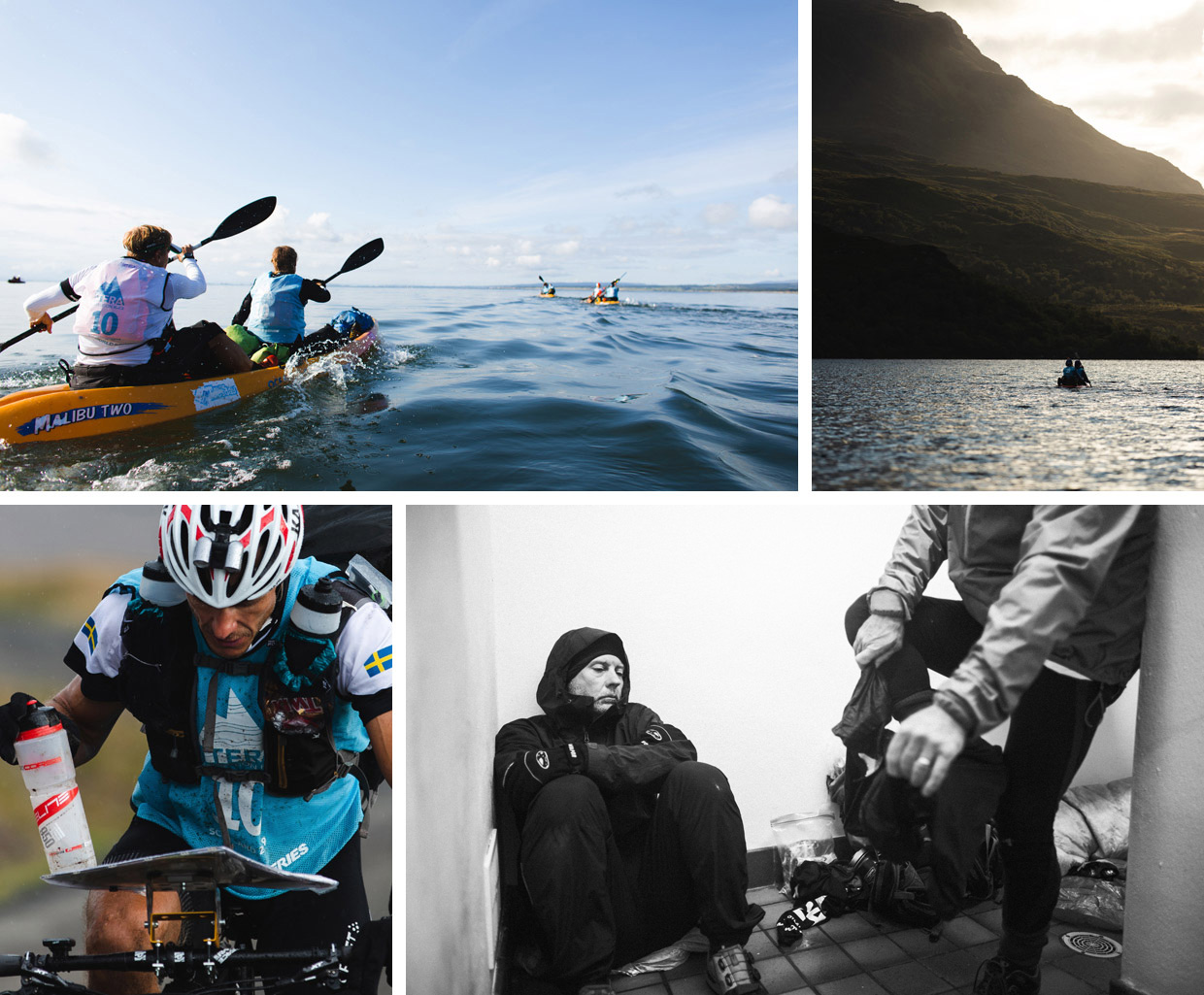 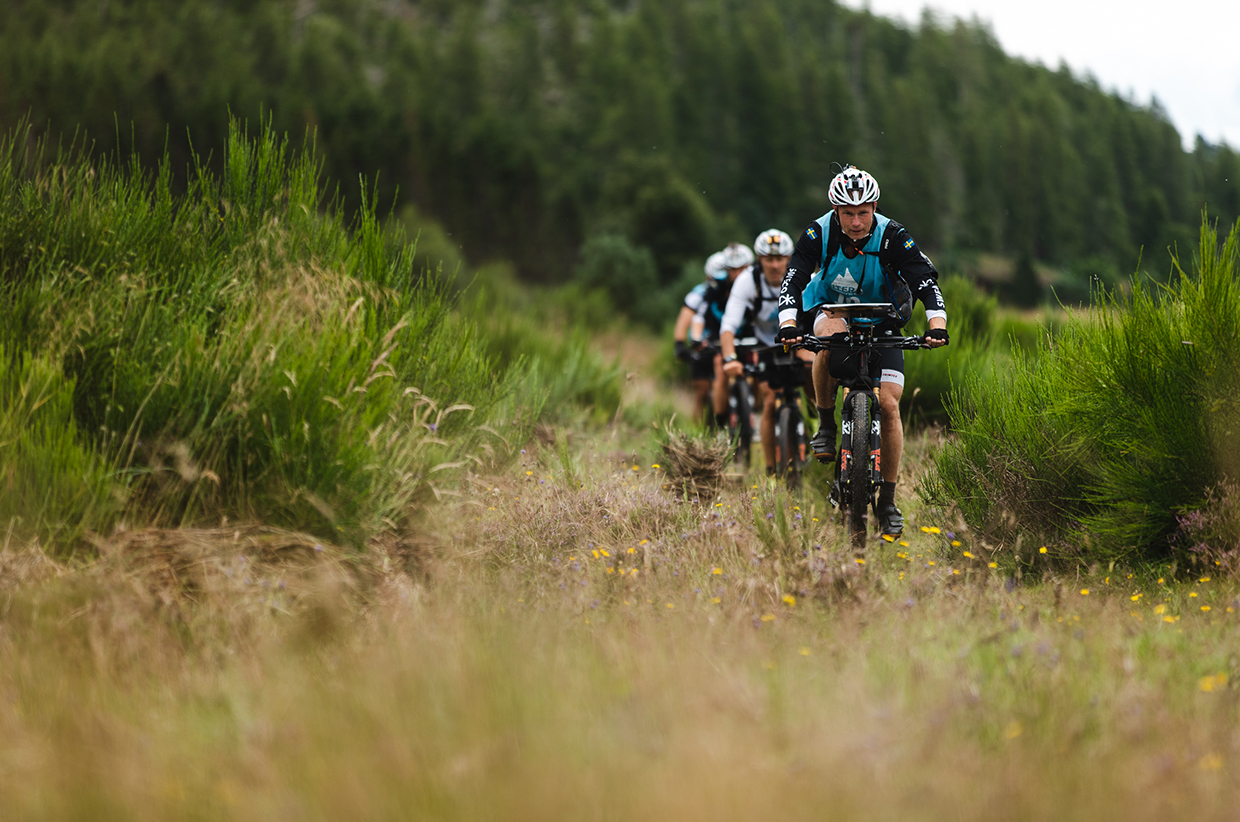 As teams came to the finish of their ride, they arrived at the Ledmore community hall. This transition point had been taken over by kit, maps, and packets of food. Racers quickly checked in, packed up their bikes, and picked up their kayaks. From here they would paddle from Loch Veyatie to the west coast (with a checkpoint up the mountain of Suilven) and towards the Summer Isles. Because of wind, the teams were rerouted closer to shore and had to battle numerous portages. It was a constant frustrating challenge to carry and pull their kayaks through heather and bog.

In the early hours of the morning, teams tried to work out the best route for dragging their kayaks to the road – through the heather or through the heather? There wasn’t much option but to grit teeth and keep momentum. As teams slugged past me, my camera on them, they looked unimpressed and tired. I met Team Endurancelife, who looked knackered, but a glint of sun and a double rainbow spurred them on, even if just for a minute. Once they hit the road you could sense the few seconds of relief before strapping on their portage trolleys and wheeling a few more kilometres to Achiltbuie to then carry on paddling.

Of course, the teams’ portaging woes weren’t over yet. After paddling through the Summer Isles, there was yet another portage from Annat Bay to Carnach on the Scoraig Peninsula. It doesn’t look like much on a map but teams were now fed up of the struggle of dragging the kayaks across land. After crossing Loch Broom to Ardessie, the teams would do a short canyoning course which would send them jumping into the water and abseiling down waterfalls. I’m sure teams appreciated the wake-up call they got from the freezing water.

I decided to take on the task of keeping up with Columbia Vidaraid as they trekked 1,062m up to the summit of An Teallach. Despite their lack of sleep they trudged on while happily chatting with me. What started as a path quickly turned into a boggy schlep as I tried to maintain the team’s pace. With minimal stops on the way up for snacks and navigation, reaching the summit checkpoint brought smiles to their faces as they took in the spectacular view. From here it was goodbye as I headed back down to my cosy van and they trekked on through the night. 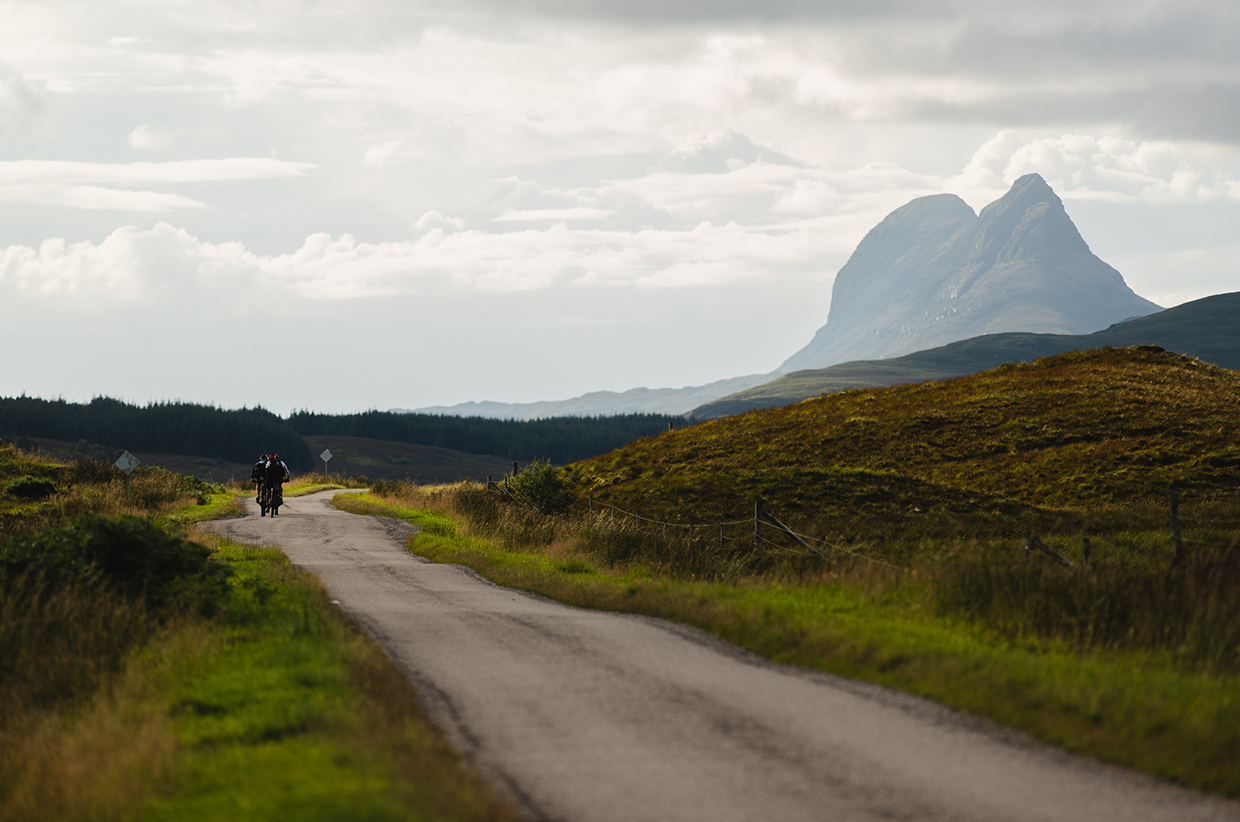 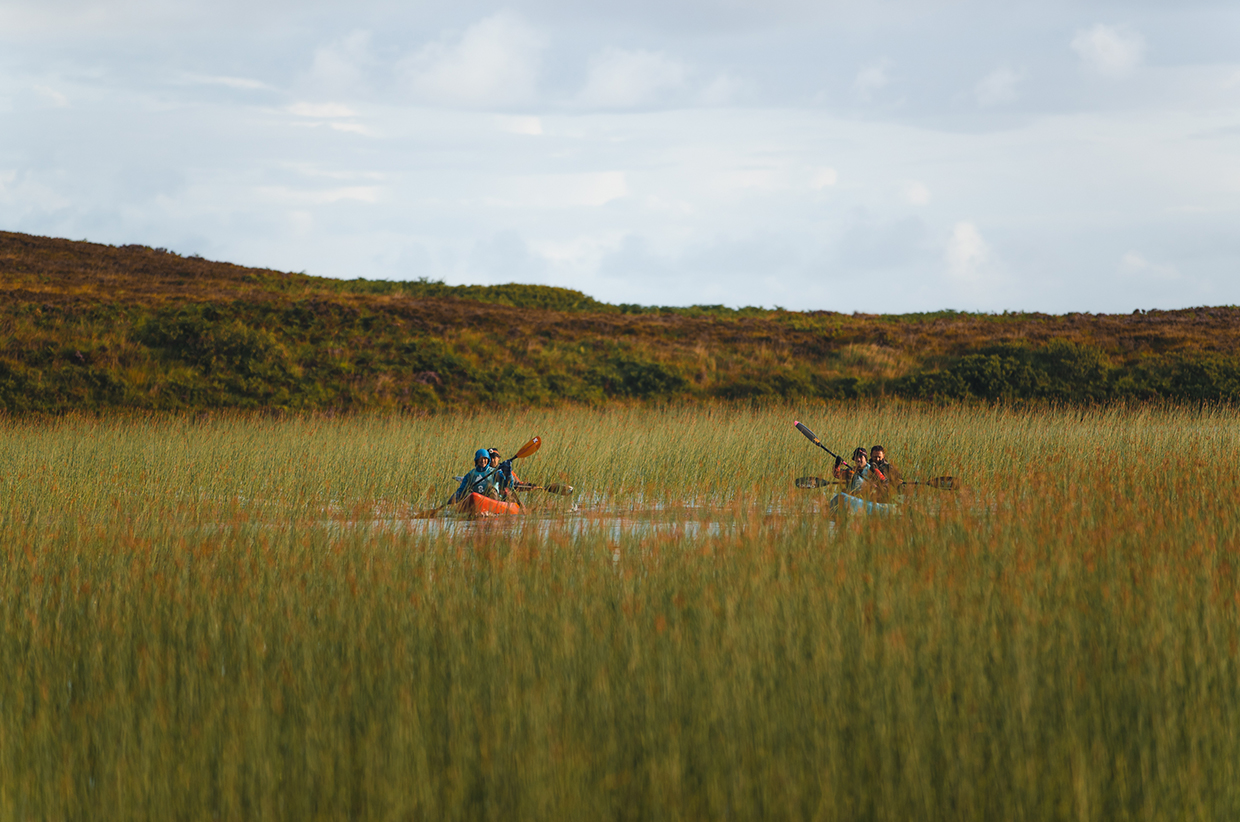 Up at 5.30am, I went over to the Kinlochewe Community Hall checkpoint. Here teams arrived and had a mandatory 20-minute stop to pitch their tents. This sounds like a simple task but the infamous midges of the west coast were out. And they were hungry. Unfortunately for the teams the midges had them surrounded, on the hunt for any exposed flesh. Some of the braver (or insane) racers had no midge net and were wandering around in shorts. As quickly as their hands could wipe the midges off their skin, another layer of the buggers had landed. After pitching tents it was straight back on the bikes to race away from the swarms.

As racers made their way through Torridon, they originally had checkpoints up on Liathach’s ridge, but this route was cancelled and they instead carried on towards Applecross. The steep ride up this mountainous pass was a slog on mountain bikes. After reaching the top of the Bealach na Ba, it was now a fast-paced descent along the windy single-track road – time to relax their legs.

That evening I was hunkered down in my warm van outside the Kinlochewe public toilets when I heard voices outside. I jumped out, camera in hand, and found Team NYARA huddled around a map. They said they had only just made the cut-off for the last transition point but hadn’t had time to rest. These public toilets apparently looked like the best option for getting some food and pulling the sleeping bags out – it probably felt like the Ritz after being out for three days with little to no sleep. I later found out that the team donated money to the local community who manage the toilets as a thank you for their night’s accommodation.

The next checkpoint was at the Morvich Outdoor Centre, where I found teams in the back room. Here there was a distinctive smell from the damp clothes and dirty bodies. Now it was time for a changeover from bikes and back on foot, hiking up and over the Five Sisters of Kintail. Teams moved as fast as they could given their hungry and sleep-deprived state. Team OMM and NAV4 both had injuries that were being looked at, one with an extremely swollen and painful finger and another with a bicep injury. At least there was a dog from a nearby house that was happy to be petted (in between trying to steal food) while teams waited for their diagnoses. 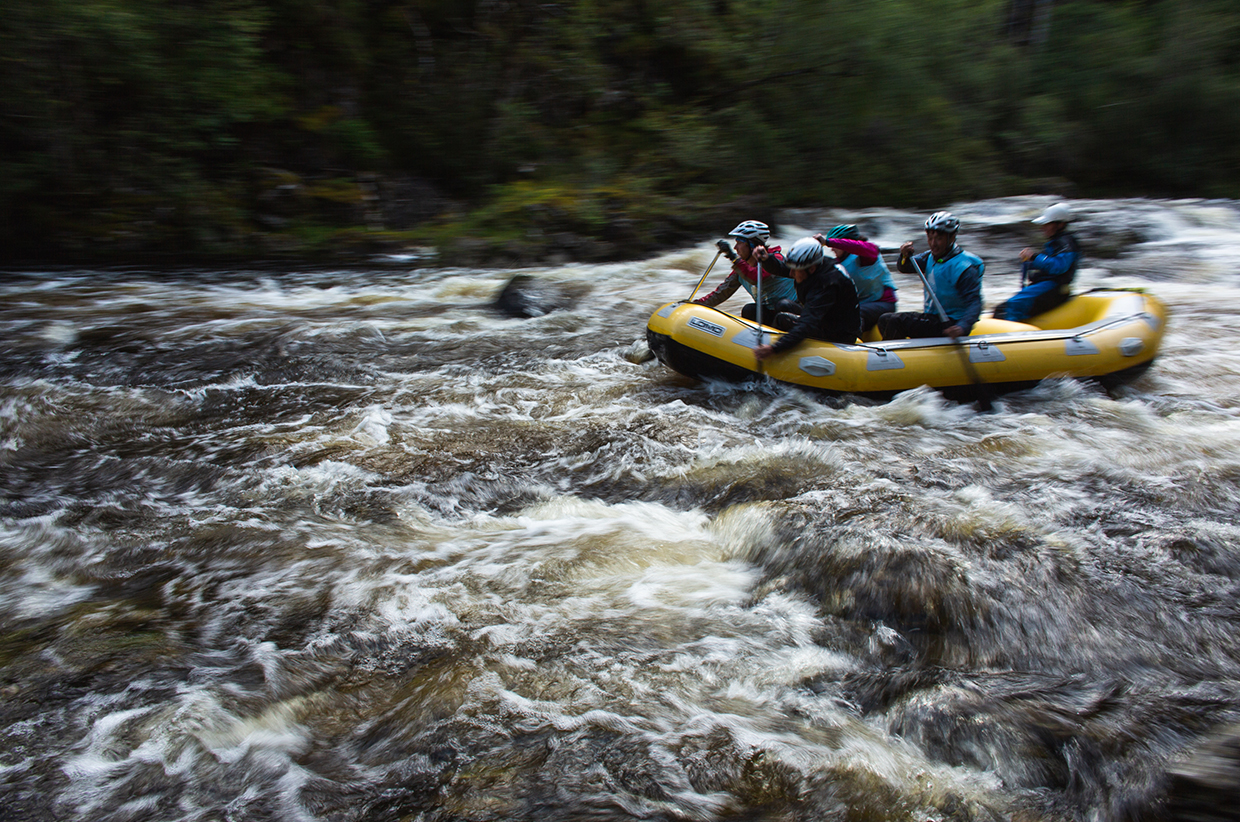 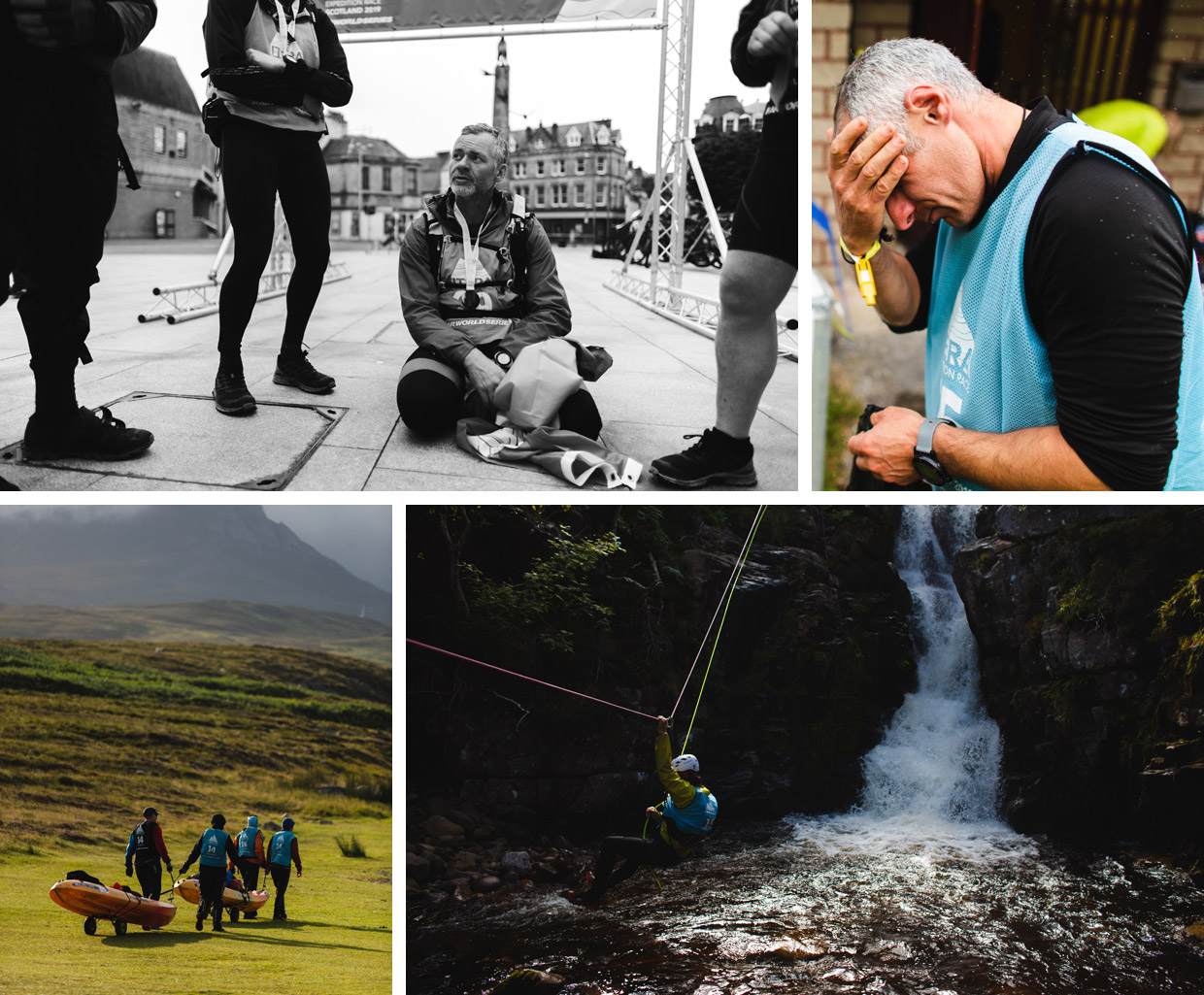 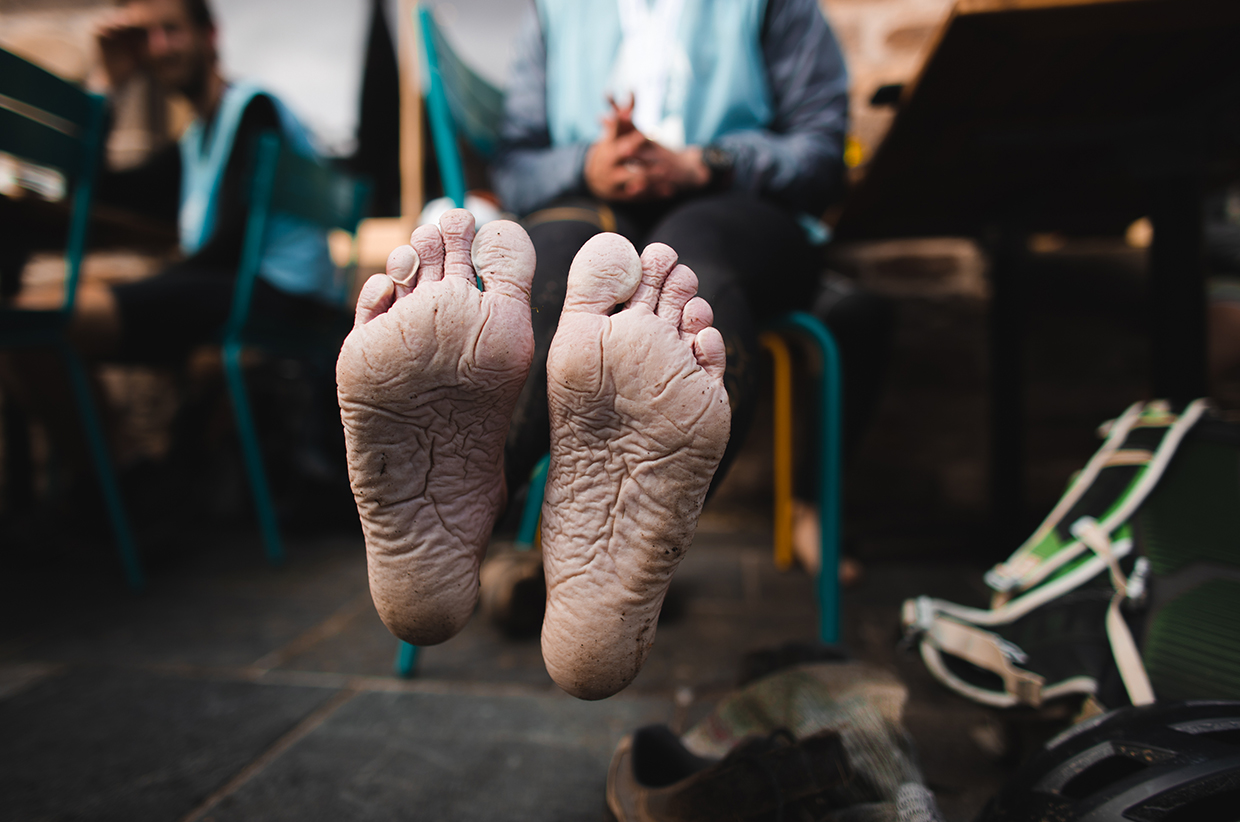 After a few days of chasing teams, I decided that my legs could do with missing the hike up the Five Sisters, so instead I made my way to Loch Cluanie to catch teams coming down off the ridge. As I headed up I could see Lozere Team2raid moving quickly down through a river path, every now and then using it like a slip and slide. The view was spectacular as they made their way down towards the loch and the team must have been distracted by the food aromas coming out of the Cluanie Inn. Again, I thought I could rush down and catch them, but the lead team were on a mission and managed to dart off.

Another transition down and the teams were back to packing their kayaks and wheeling them down to Loch Poulary. From here they would paddle through Glen Garry and then be required to switch out of their kayaks and into a raft for a short trip down the river, hitting rapids as they went. After a mandatory 90-minute stop during rafting, they were again back in their kayaks, this time for the final paddle to the last transition, up Loch Oich and to Fort Augustus. Here they would trade their kayaks for bikes and ride the Great Glen Way to the centre of Inverness.

On the final morning I was up at 3.00am and heading out to find any teams along the Great Glen Way. After checking the tracker I found Lozere Team2raid had quickly been covering the 70km route to the finish. Out of the darkness I could hear a sing-song, keeping them motivated. With not much time for a ‘hello’ they kept on pushing to get to the finish line. In 93 hours, 48 minutes and 36 seconds they crossed the line and were greeted by friends, who had four pizzas laid out for them.

Throughout the day, more teams arrived at the finish line with mixed emotions – hugs, smiles and tears all around. Conveniently the finish line was next to Pizza Express. Teams pulled up chairs, ordered food, beers, and shared stories. There was also a lot of comparing foot damage and other injuries. Regardless of how everyone looked and felt, there was a definitive expression shared among racers: we did it!

For information on the ITERA Expedition Race, visit itera.co.uk