LAND OF THE DAWN-LIT MOUNTAINS 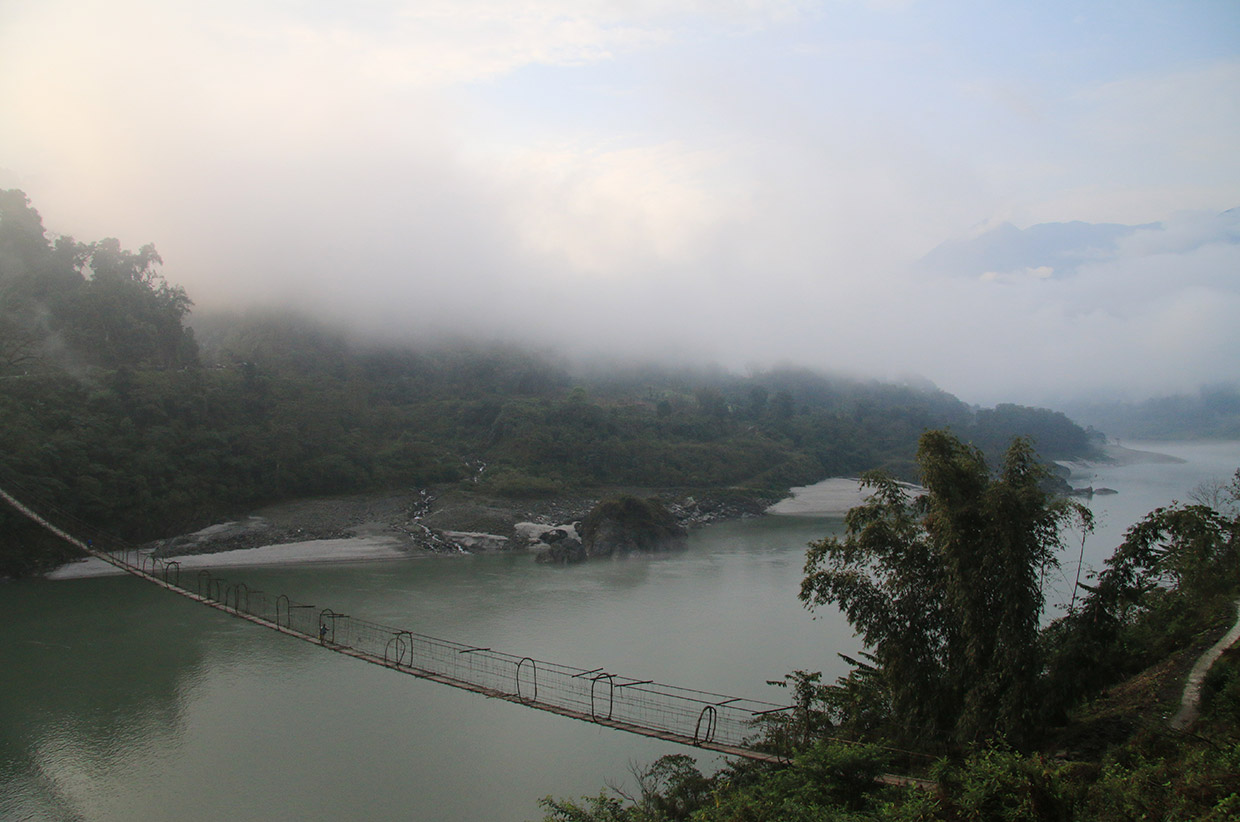 In February 2016 travel writer Antonia Bolingbroke-Kent set out on a journey across the Northeast Indian state of Arunachal Pradesh. Travelling by foot and motorbike, she spent ten weeks exploring the remote Himalayan land. The following extract from her book, Land of the Dawn-Lit Mountains, finds her in Pemako, a sacred valley on the Tibetan border.

To reach the mountain we had to cross two rickety hanging bridges, their rusted cables almost invisible under quantities of prayer flags. As I edged over the first one I felt a strange stirring of emotion when a shaft of sunlight, the first we’d seen all week, burst theatrically through a chink in the grey. For the next half an hour we slid and scrambled clockwise around the steep shoulder of the mountain on a treacherous pilgrim’s path. We grasped at slippery rocks and woven roots, slithered down muddy slopes and pulled each other over rocky ledges through damp tunnels of prayer flags, the river rushing a hundred metres below. At times there was nothing to stop us falling down the vertiginous sides of the mountain: it was not a feat for the old or infirm. At one point we slid and half crawled into a small cave almost hidden behind soggy streams of flags.

‘This the dakinis’ cave,’ announced Kabsang, sitting on a rock in the gloom. He rubbed his fingers on the wall and pasted a streak of red mud down both our foreheads. ‘It’s good luck from the goddess.’

Afterwards we climbed up to the monastery itself, a squat building perched like a stone crown on the bald pate of the mountain. Built after terton Nang Gay’s original structure was destroyed by the 1950 earthquake, it was a simple affair with three golden finials on its red metal roof and large arched windows on either side of a grand red door. Prayer flags streamed from the corners of its roof and red, hand-painted prayer wheels lined the side walls. Outside it was a stone throne said to have belonged to Guru Rinpoche, the earth around it littered with offerings – rings, coins, bracelets. An oval rock beside it allegedly aided fertility, its black surface polished smooth by the hands of numberless hopeful women.

‘If you carry it around the monastery maybe Guru Rinpoche will make you pregnant,’ joked Kabsang.

Stranger things have happened in Pemako, I thought, keeping well clear of the stone. 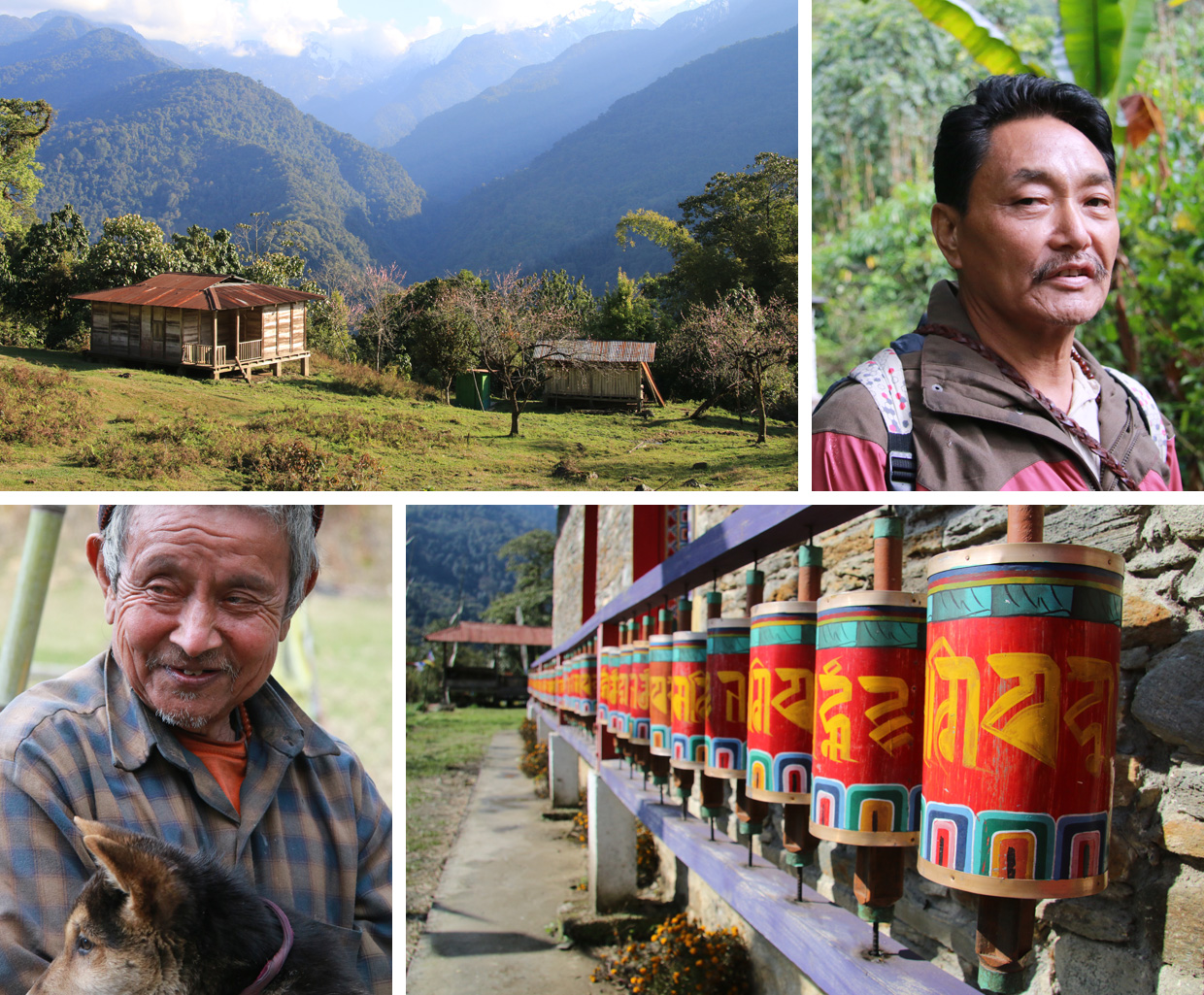 Beyond the red doors of the monastery its twilight interior glittered in a haze of psychedelia. Apart from the plain wooden floorboards, not an inch had been left undecorated: pearly white deities floated across the walls on lotus leaves, shooting rainbows into the cosmos; clouds swarmed with multi-coloured gods and goddesses; blue horses snorted beside charging white elephants wreathed in flames; meditating Buddhas emanated golden light; gods flew through space astride rainbow-powered lotus leaves. Above an altar lined with water bowls, conches and butter lamps, the carved golden figures of Guru Rinpoche, his consort, Yeshe Tsogyal, and the terton Nang Gay sat on thrones of lotus leaves, glaring into space with fearsomely bulging eyes. I later learned that these delicately carved figures were not only modelled from mud, but that they’d been made by Dorje. There seemed no end to the king’s talents. Dressed in beautifully painted robes, they wore gilt crowns and held bells and double-headed thunderbolts, their scarlet lips pursed into expressions of mild disdain.

They didn’t look like the sort of gods you’d want to annoy, even if the Rinpoche’s rosebud mouth was framed by a curling, dandyish blue moustache. On either side of them brightly painted cupboards were stuffed with dusty, silk-bound sutras and bronze Buddhist icons. The ceiling – carved and painted into a series of geometric patterns and hung with silk banners – was no less extravagant. It was like walking into a tiny parallel universe and being injected with LSD on the way in. If years of meditation could induce the phantasmagorical visions that sprawled across these walls, I vowed to do more of it from now on. 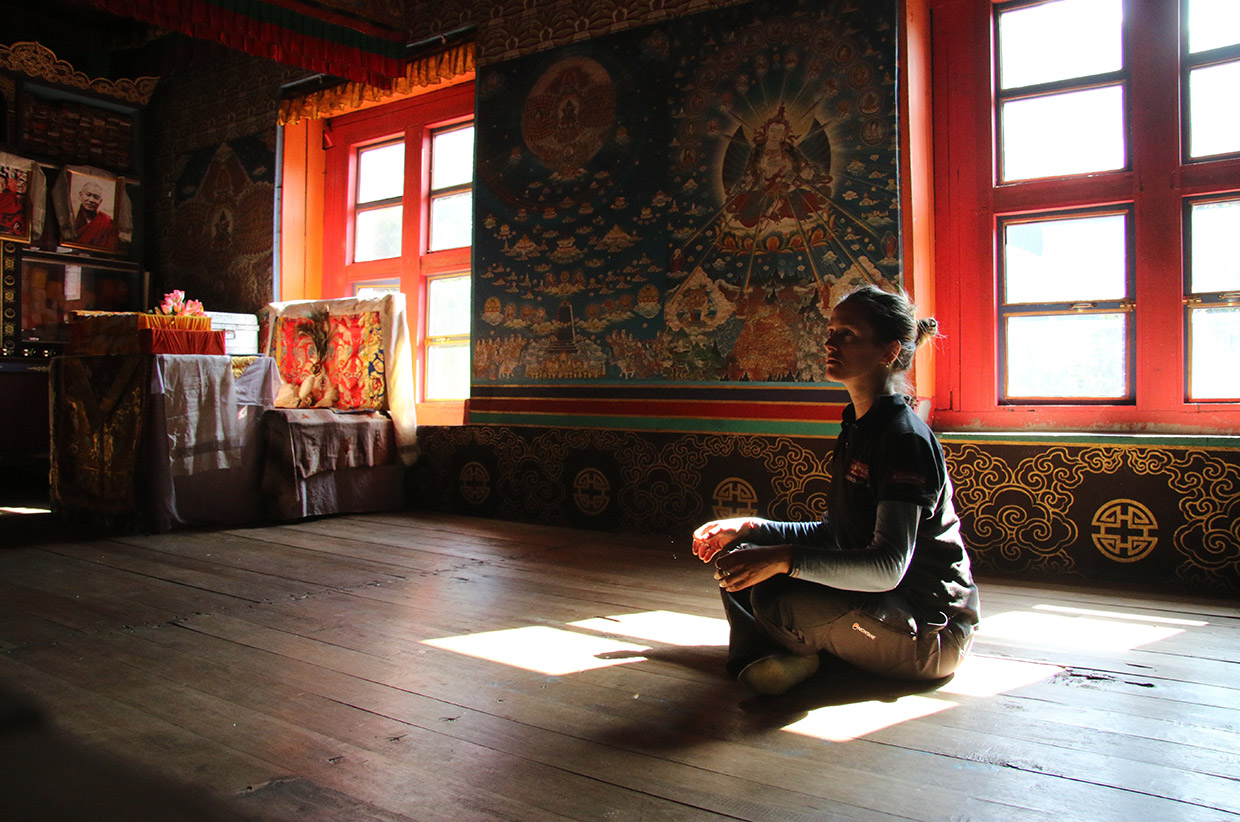 I sat at the front, alone, below the fat golden toes of the Rinpoche, the late-afternoon light falling in weak pools through the windows. I felt charged with emotion and elated to be there, of that there was no doubt. It had been a long journey to reach Devakotta, physically and emotionally, and one that nearly hadn’t happened at all. But there was something else too. An odd light-headedness. A sense that the thickened air vibrated with an unknowable energy. Maybe I was just imagining it, transposing the emotions of my own journey onto the place. Or maybe not. I’d felt it at Kamakhya too, but it was even stronger here, the energy almost tangible, as if I could somehow scoop it from the air and hold it in the palm of my hand, a golden, pulsing orb. To my disappointment, I’ve never been one of those cosmic types that can ‘feel the energy’ in stone circles or the like. But here, well, there was something. Lamas and pilgrims had been meditating here for decades; who knows what invisible energies the space had absorbed.

Extracted from Antonia’s latest book: Land of the Dawn-Lit Mountains, published by Simon & Schuster (UK and India). For more information or to buy a copy visit: http://www.theitinerant.co.uk/books/land-of-the-dawn-lit-mountains/

Star Cruza Rising From The Rubble