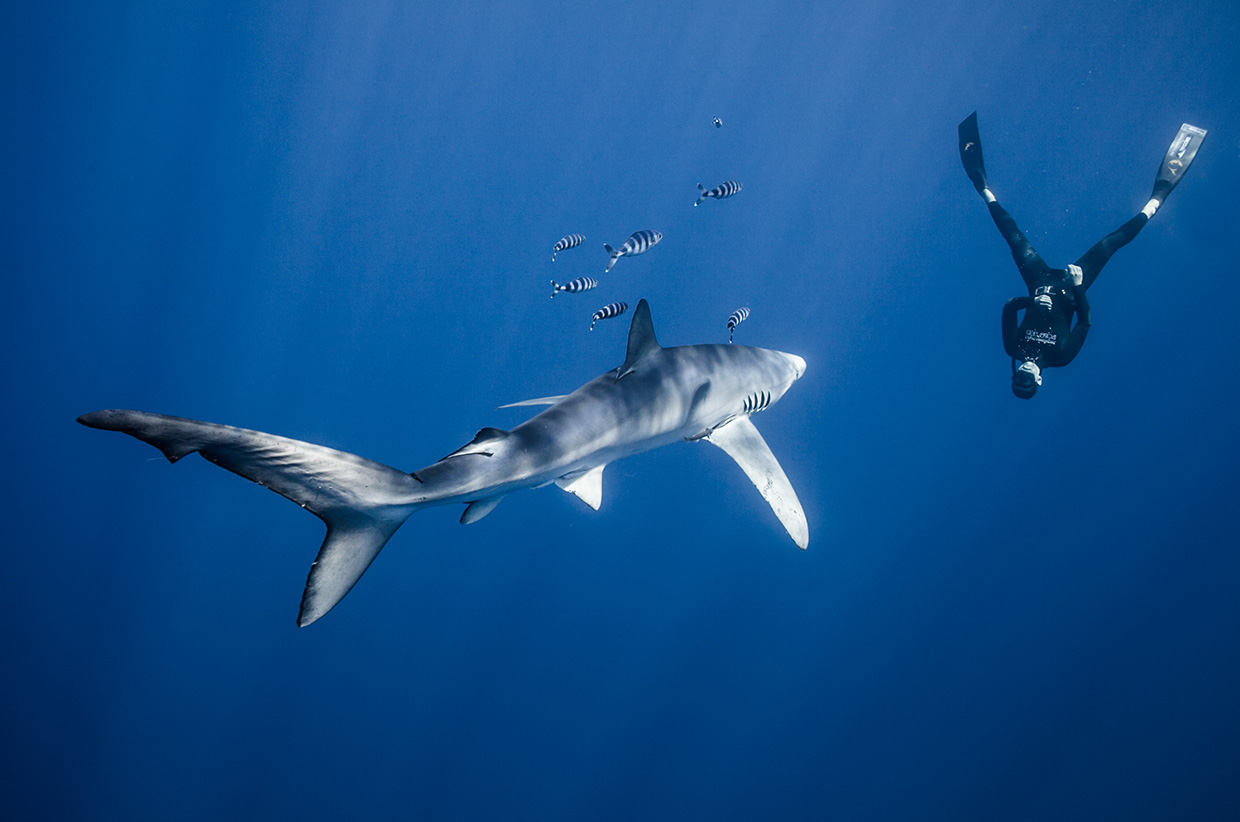 ‘People can argue that grizzly bears, lions, cheetahs, eagles, snakes, Komodo dragons, or orcas are the coolest animals. But there’s just no way around it: sharks are by far the coolest.’ —Lukas Müller

Shark scientist and freediver Lukas Müller, 27, dives and freedives with the ocean’s apex predators in order to undertake conservation research. It was clear from the moment I met him that he’s besotted with sharks. When asked why he loves these animals so much, he regaled me with his reasons:

‘I care about sharks because they are by far the coolest animals in the world – and especially in the ocean. People can argue that grizzly bears, lions, cheetahs, eagles, snakes, Komodo dragons, or orcas are the coolest animals. But there’s just no way around it: sharks are by far the coolest. To me, sharks are the embodiment of the perfectly adapted predator. The bull shark in particular, which I’m going to be studying in Mozambique, has tools in its repertoire that will blow anybody away. It’s one of the few fish that can transition through ecosystems: occupying fresh water, brackish water, and salt water, surviving just as well in the open ocean as it does in lagoons and murky river waters.’

The German freediver, marine biologist, and ocean media producer has been passionate about marine life from a young age. Now, seeking out interactions with fish has become one of his biggest joys in life. As you might expect, he has many stories about his encounters with sharks all across the world.

While most people realise that outdated Hollywood portrayals of sharks as ferocious killing machines are, well, just wrong, with Lukas it’s more than that. Yes, he cares about their conservation, but his tenderness when talking about his encounters with them is surprising – for example, his poetic description of ‘the dance’ that takes place between a human and shark in the water as they try to figure each other out. It’s enigmatic, graceful, and intriguing. 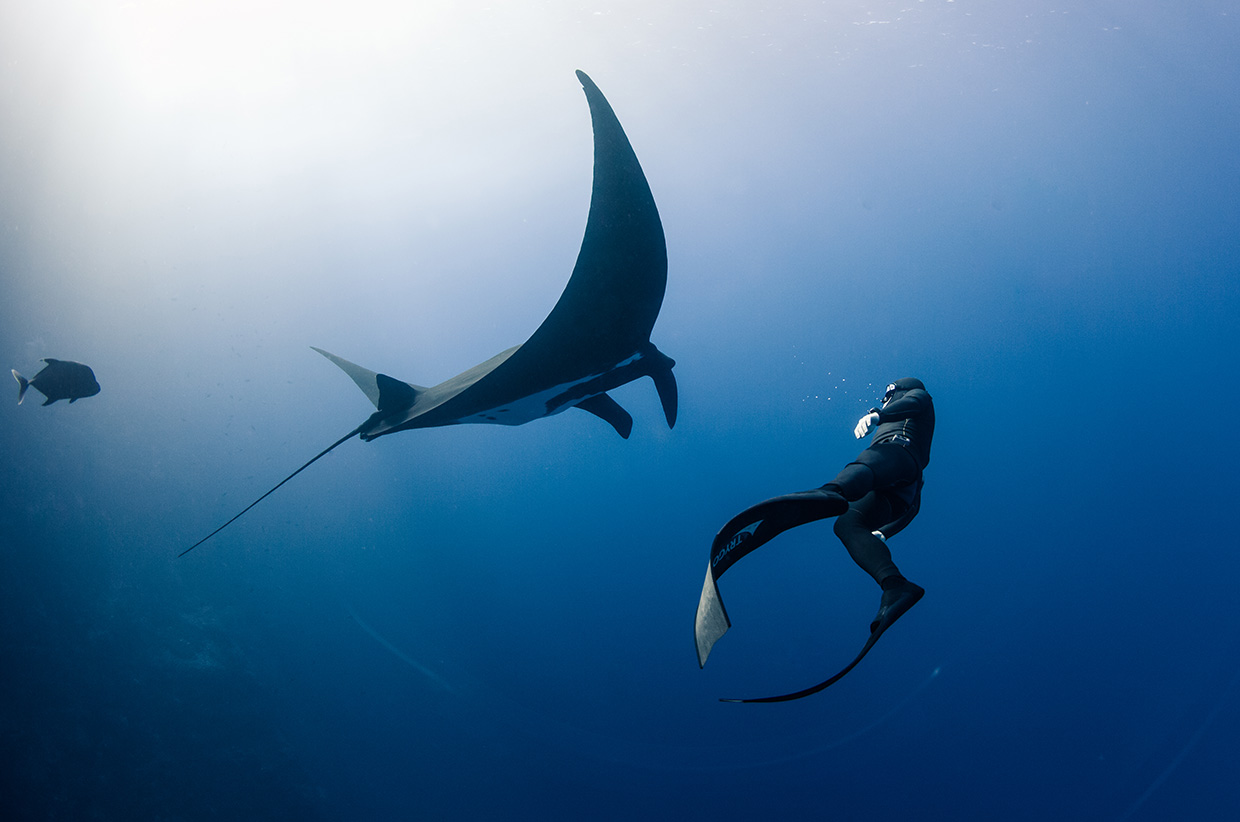 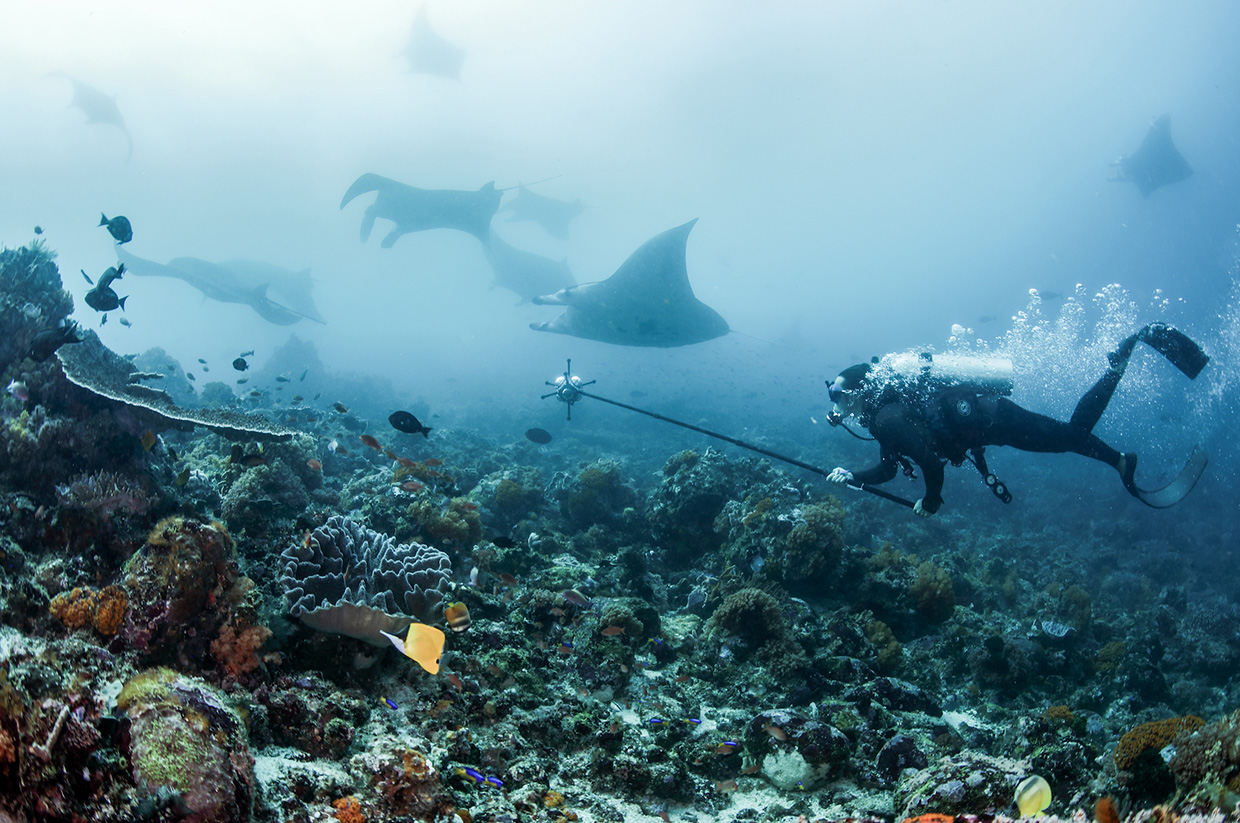 The first time he saw a great white, while volunteering for White Shark Projects in Gansbaai, South Africa, it wasn’t the gnashing jaws that impressed him but the connection he felt when the shark looked him straight in the eye: ‘There is a connection we can have with other species,’ he said. ‘Maybe I’ll never truly grasp what it is, but these close-up encounters help me to understand not only what makes these animals tick but also what makes us – as humans – tick, why we seek out these interactions.’

In the Azores, he had to wait in the hot sunshine for over two hours before a 2.5m male blue shark would come near the boat. The majestic creature circled twice and the group hopped in to observe its behaviour. It took several minutes before the shark was confident enough to approach but, when it did, it swam right up to each of the divers, trying to figure them out. For Lukas, who ended up ‘playing a little game of chicken’ with the shark – which approached him much closer than he could ever have expected – it was one of the best moments of his life.

Seeking out shark interactions isn’t as easy as you might think. Even finding the sharks to study can be a huge challenge: ‘Most people don’t know that sharks are very shy creatures. Usually, they will only regularly come to boats when you attract them with fish or bait, which is now especially the case because there’s been a lot of fishing pressure on sharks. Sadly, it’s been getting more and more difficult to find them – which makes it difficult for us to understand their habitats and protect them from threats.’

After completing his bachelor’s degree in biology, he moved on to the more specialist field of marine resource management, with a focus on fisheries and MPAs, and working closely with local communities to help reduce the pressures of human activity on sharks. A competent freediver since childhood, Lukas was later mentored by world record holder William Winram who taught him the intricacies of open-ocean freediving and how to safely interact with large marine animals and predatory sharks.

Learning how to safely and respectfully freedive with great whites in open water took hard work, dedication, and hundreds of hours of intense training in the deep tank. This was a risky process that required Lukas to be in the best possible shape, both physically and mentally, so I found it hard to believe Lukas’s protestations that he’s ‘just a regular guy’. But the intense pressure on his body took its toll: a few years back, Lukas had a shoulder injury – caused by a minor accident during a training session – that nearly cut his career short. Somehow the injury was misdiagnosed and treatment failed, leaving Lukas with both shoulders seriously damaged.

Reflecting on this difficult time, he told me, soberly, that this was the closest he’s come to giving up: ‘There were moments when I could barely lift my own arm without excruciating pain. Just lifting a glass of water to drink was extremely painful. During that time, I couldn’t move for almost a year – I just lay in bed unable to do anything, and my girlfriend had to take over the household, care for me, and even dress me. I lost 14lb of muscle mass and thought I might never go back on expedition or dive with sharks again.’ 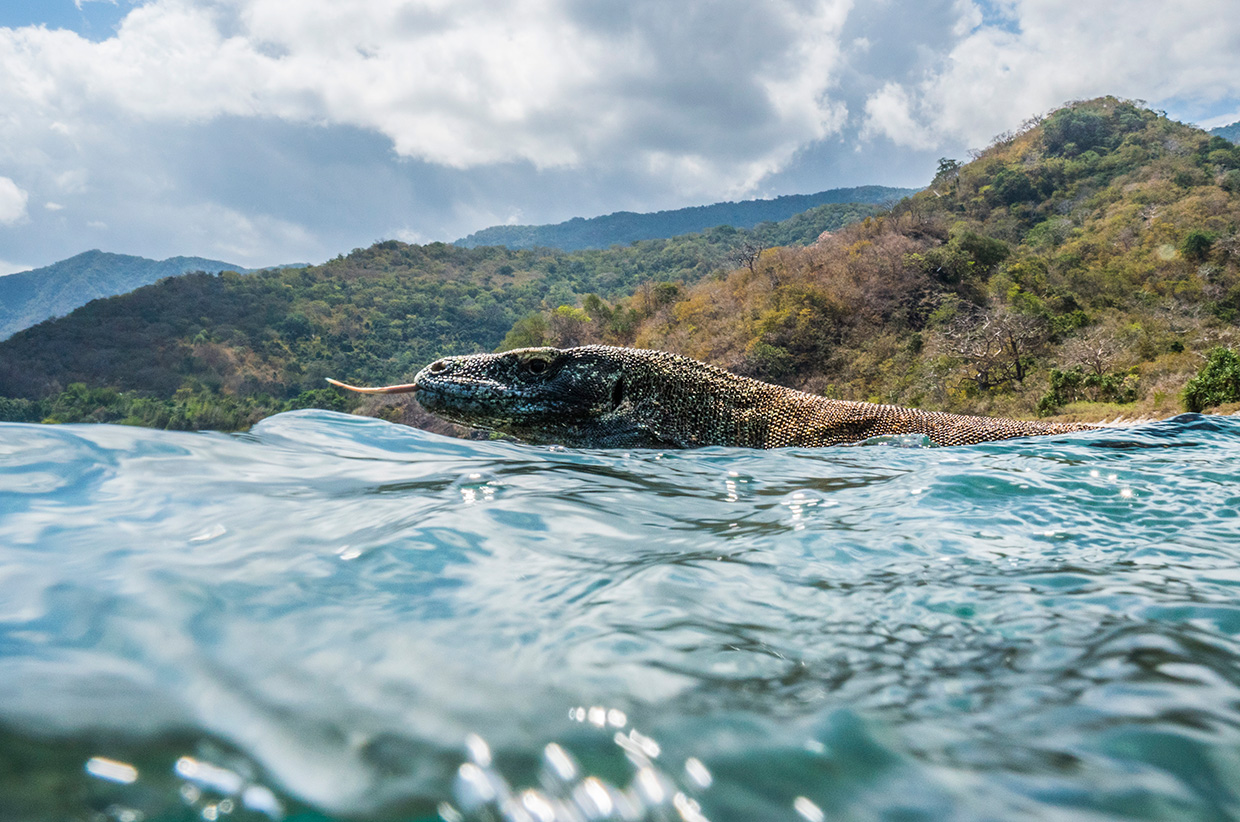 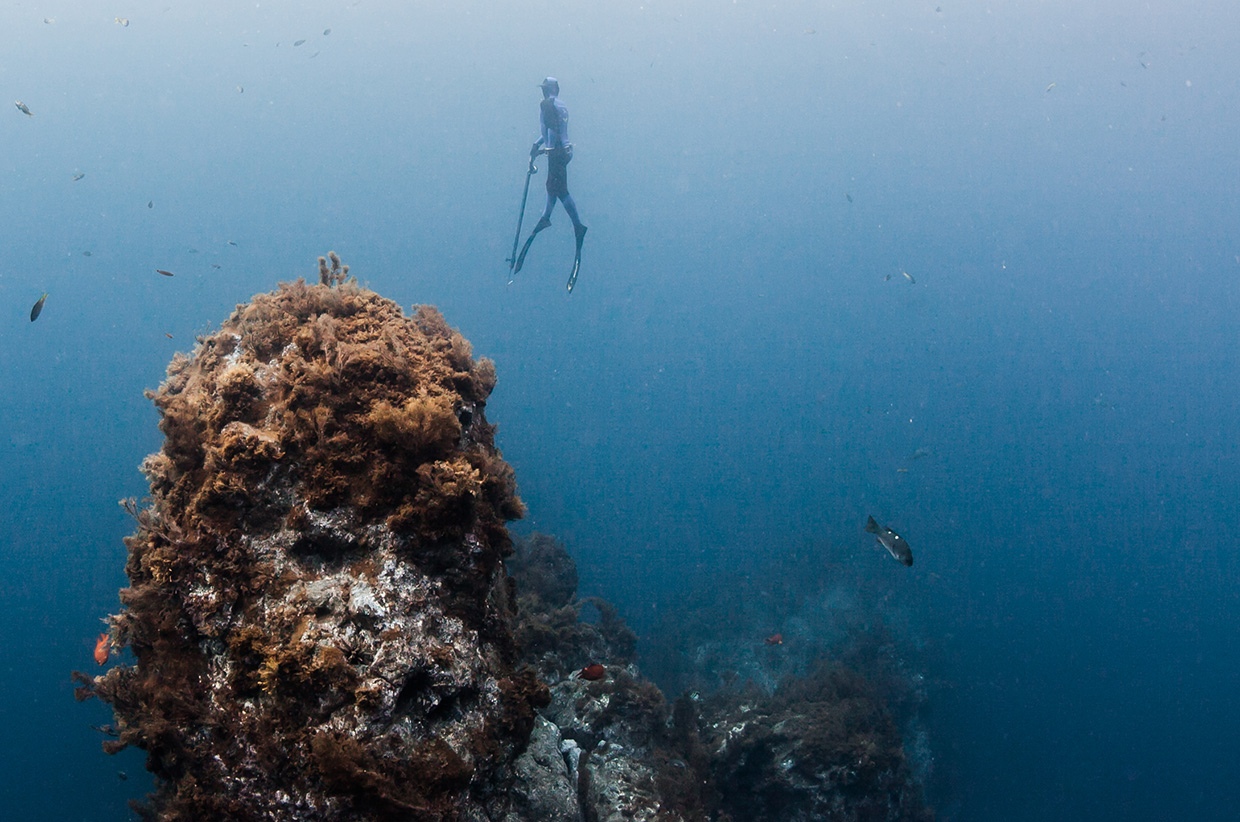 While many might have been broken by the experience, Lukas couldn’t give up on his dream. ‘I’m not really sure what my motivation was to keep going,’ he mused. ‘The support from my family really helped but also, deep down, it was the hope that one day I could dive with sharks again. I was just hoping for one more dive – just one more so I could soak it in.’

And so he tried new therapies, new therapists, new methods until he finally found a physiotherapist who helped him to make real progress. Yet his recovery was slow and even now he sometimes feels pain when carrying heavy equipment.

Rather than lament the lost time in the water, Lukas’s arduous recovery – and the realisation that his dream could be snatched away at any second – gave him a renewed appreciation for his career: ‘In retrospect, it was one of the best things that ever happened to me,’ he said. ‘The journey to get back in the water was so tough that I appreciate every moment with the sharks so much more now. I treat every dive as if it’s my last and soak in everything I see, every second underwater.’

And now he’s back in the water, what next? His overarching hope for the future is ‘that we’re able to protect habitats along different coastlines around the world so sharks can recover from the pressure we humans have put on them’. Inspired by his previous experience of igniting a passion in people who haven’t encountered sharks face to face, he hopes that sharing his underwater experiences can help spark a ‘tidal wave for shark conservation’. With his admirable determination and contagious enthusiasm, I think he could be just the man for the job.