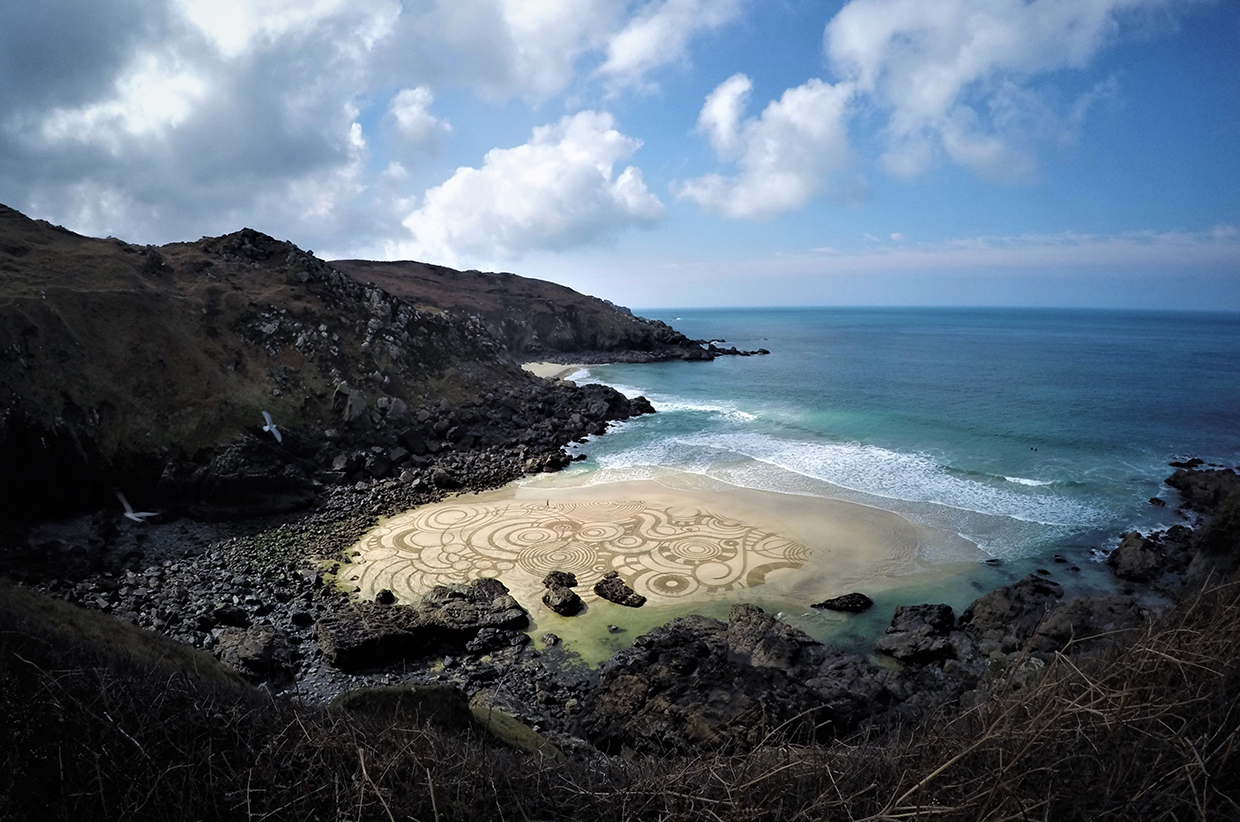 Cornwall-based artist Tony Plant is a painter and beach-drawer whose conversation-sparking public artworks reflect the fluidity and impermanence of landscape. For the 2019 Ocean Film Festival World Tour, he’s produced a film that captures the making of one of his beach drawings on the southernmost beach in the UK, Porthcurno.

Although it took Tony one and a half hours to finish the beach drawing shown in Forever, he waited almost four years for the perfect tide and the right weather conditions to make it happen. If it weren’t for the film, the drawing wouldn’t exist, Tony says, apart from in the minds of those who watched it unfold from the viewpoint of overlooking clifftops.

The purpose of his artworks and the film, he says, is to spark conversations about landscape – its fluidity, its interconnectedness, and our place within it.

This year’s Ocean Film Festival World Tour, which takes place from September 10th to October 25th and is showing in venues across the UK and Ireland, follows the work of several artists: Philip Gray, who in A Peace Within paints underwater in Mexico’s cenotes (otherworldly clear-water subterranean pools); artist Roelf Darling, who works with scientist Christina Hagen in A Place for Penguins to rethink the conservation of African penguins; and photographer Ben Thouard, who creates striking, glassy images of surfers around the world.

The festival also follows the stories of misfits and ocean mavericks like surfer Dan Schetter, who lives on the shores of Lake Superior in Michigan and shares his waves with icebergs, and Robert Manry, who in 1965 sailed across the Atlantic from Falmouth in the US to Falmouth in the UK on a 13.5ft wooden boat named Tinkerbelle.

To mark this year’s Ocean Film Festival, we spoke to artist Tony about his work and the making of the film Forever.

Let’s start at the beginning. What made you want to produce a film for the Ocean Film Festival in the first place?
I like that it plays in all kinds of venues, and that people can hire it themselves and take it to places where it’s never been seen before. That’s not only fantastic, but it’s necessary to take it to new people.

I was involved in a project for the festival a good few years ago, where I spoke at one of the screenings – which was terrifying, but also brilliant. I did the talk and I absolutely loved it, so I thought, I want to get involved in this again.

Tell me about all the preparation leading up to the Forever drawing.
I knew where I wanted to make this piece of work, at Porthcurno. It’s pretty much the very last beach in the UK. It’s the beach that points off into the Atlantic. It’s right on Land’s End. It’s just beaten to hell. The weather that goes through there is savage, and because of that it’s stunningly beautiful.

I knew I needed a massive tide, and you only get two of those a year. For the first couple of years the weather didn’t line up for it, or I wasn’t around, so it took three years before I could actually get onto that beach for the right tide. I waited for just the right weather window, and at the end of that film, a hailstorm comes through as well, so the artwork gets taken away by tides and hail. So really it took a good few years to plan it, and a couple of years to wait for the conditions to be right. All of that for maybe 1.5 hours of drawing.

And that’s what I’m trying to focus on, the idea that things don’t necessarily last very long. Things are very very fragile. The things that do last forever are stories and conversations, tales of a landscape and tales of an event. The memory of it all, the story of it, that’s the thing that continues. 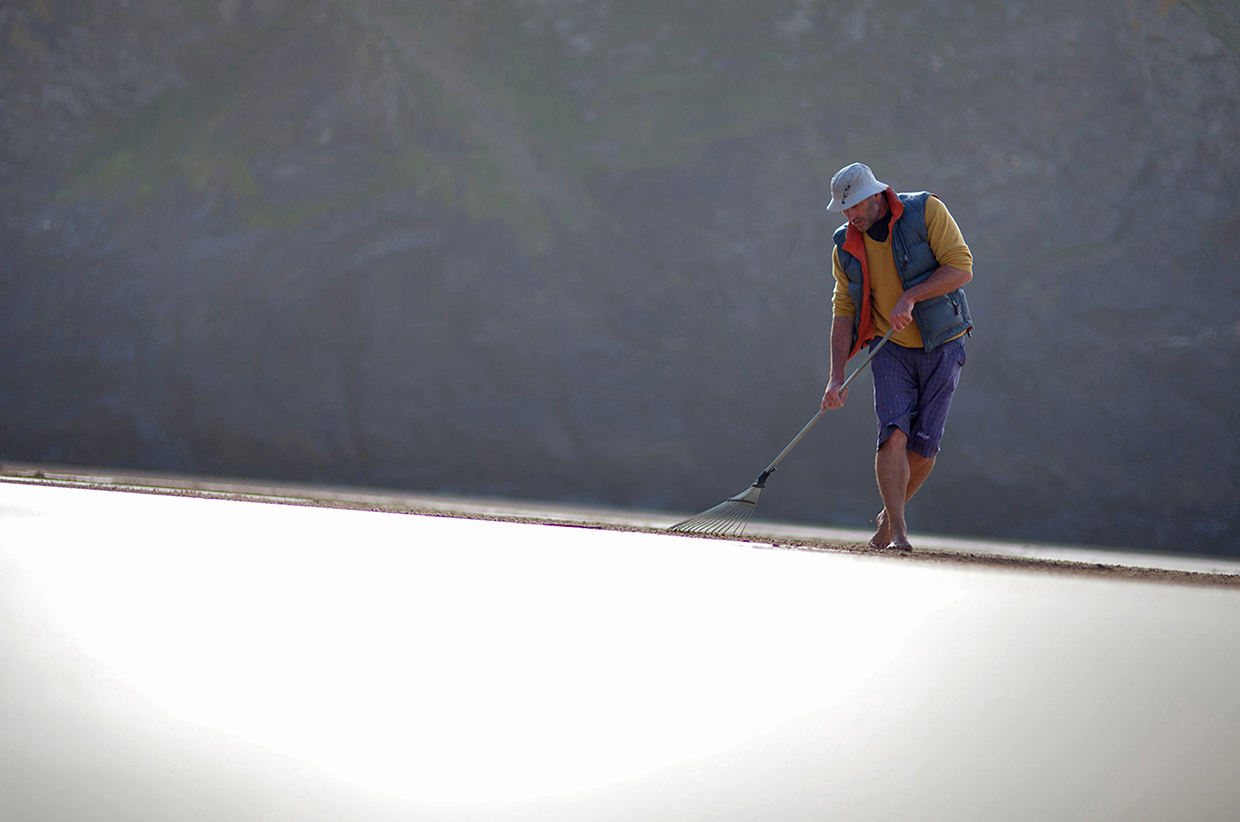 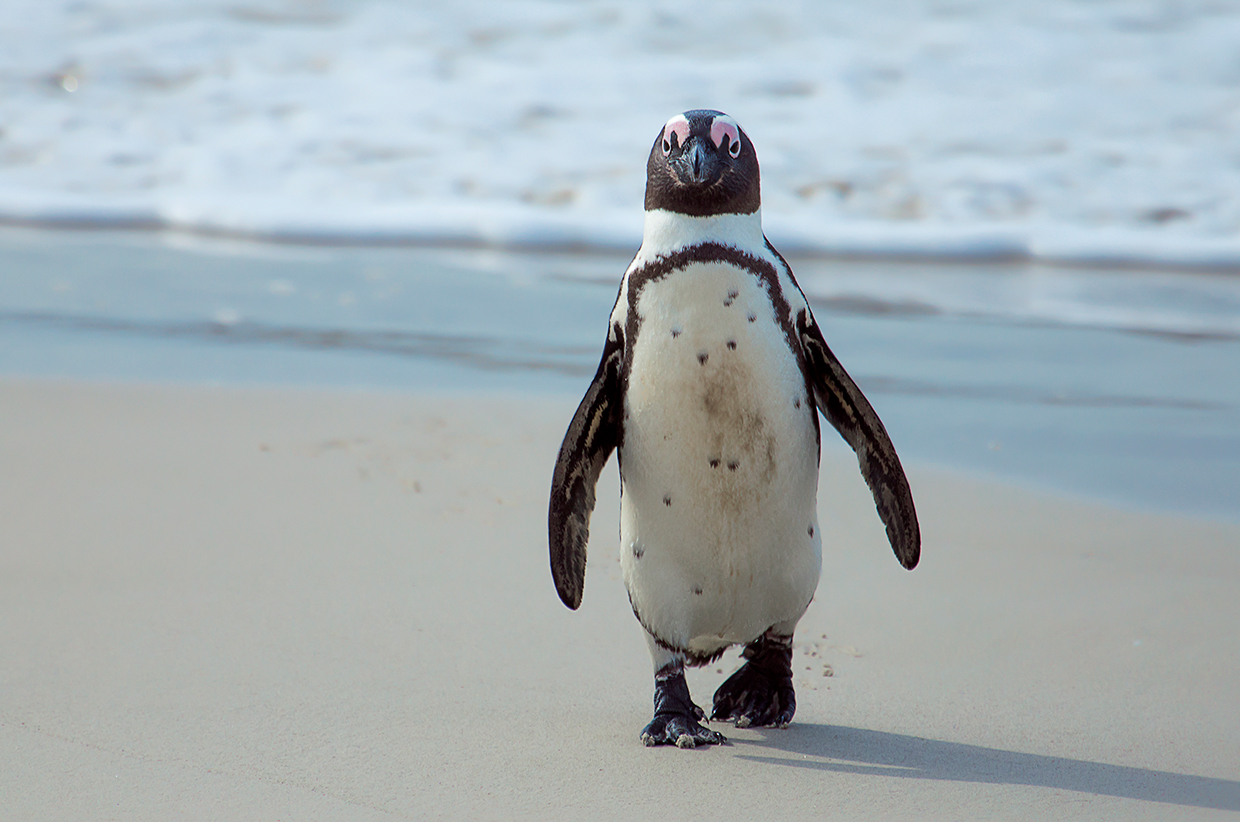 Talking of stories, why is it so important to share stories about the ocean and coastal landscapes?
In the same way that I didn’t initially want to make a speech at the film festival, it was necessary to get the message across. What I think about my artwork is largely irrelevant. When I do these drawings, no-one’s standing there with a description of what is going to happen – the intention is for people to find it by accident almost, to think they’ve discovered something.

Before I make these drawings, I’ve drawn and sketched and walked around the area for days, to see where the viewpoints are, and to see where people are likely to spot this thing from. When I draw these things, I want them to look like they fit into the landscape, not to look like they’ve parachuted in. So that when someone comes across it, it looks like it belongs there. The successful ones do anyway.

Then people stop because they’ve seen something they weren’t expecting to see. But when there’s no description, or explanation available, they start looking around for some other reference point, and then they start observing the landscape, and that’s when you have conversations happening between people on top of a cliff – and they do, they really do.

People stand there and they talk, they speculate. And they remember. No-one ends up on a cliff by accident. Especially these days, it takes a lot of planning. People make choices to get there. And they’re there for many different reasons – it can be a spiritual thing, or a remembrance thing, or for discovery, or a pilgrimage. When people start talking about their experience of being out in the landscape, then things become personal again, and people start communicating again about the world around them.

I think people feel protective towards landscapes. And people are willing to share their stories, if you give them an opportunity. I’ve been told all kinds of things by complete strangers just because there was an opportunity to stand and stop and let everything else slip away, and just look at the landscape. People come up with the most incredible stories when you meet them on clifftops, it’s fantastic. I meet some amazing people, and I love it.

What were your points of reference, or nuggets of inspiration, for the Forever drawing?
The drawing for Forever is drawn on a sandbank, and that sandbank is a product of its surroundings. The cliff bounces the waves that are coming in and it changes the shape of the sandbank, and the swell direction and wind direction change the shape and colour of the sandbank too, as well as its position. So, everything is interconnected. Everything is dependent on something else. The whole thing is connected. I don’t want people to look at what I’ve done for very long; I want people to look at the wider landscape. I want to draw in such a way that it connects features in the landscape – maybe a headland, or a series of rocks, or a rockpool that I know is going to be uncovered as the tide goes back, and to do that I need to figure out roughly where the viewer is or where the camera is.

When you step down onto the beach and start drawing, the whole thing is completely empty. It’s blank. There’s nothing there. The drawing is made by stepping forward and interacting with the space. The whole thing is fluid. People look at the same landscape in different ways. Nothing is fixed.

What did you want to achieve by filming the making of one of your artworks from start to finish?
In Forever, I really wanted to show the whole process. There aren’t many tools involved: just the sun, the camera and a rake. There are no measuring devices.

But the film isn’t a story as such. There’s no documentation of what actually happens to get down to the beach. The film just captures an event that’s happened, that seven or eight people saw at the time, that’s since been seen by lots of people around the world, which is fantastic. In that sense, it now exists.

To find out more about the Ocean Film Festival, and to buy tickets, visit www.oceanfilmfestival.co.uk

On the ITERA Expedition Race Shelter – An interview with Thomas Delfino