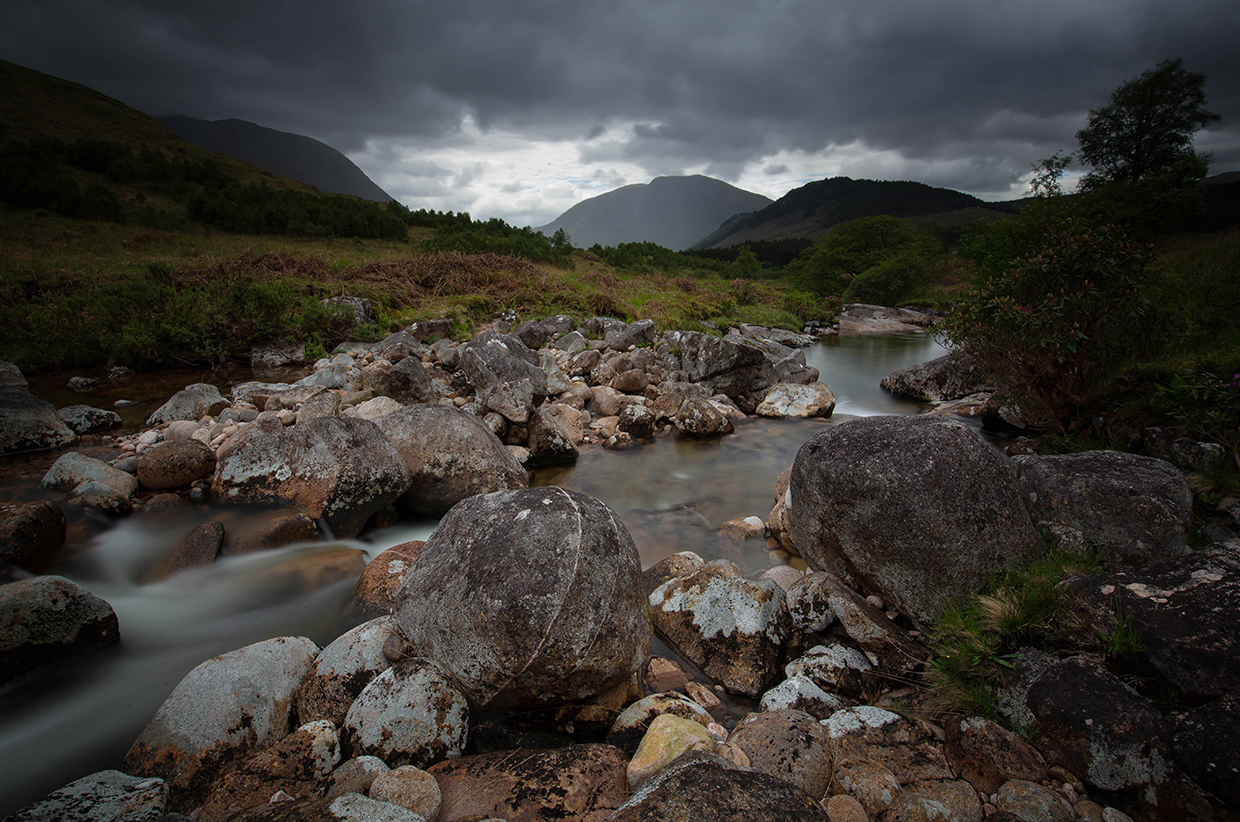 A Interview with Cal Major
Photography by James Appleton

Glen Etive is one of the most beautiful and untouched places in Britain, but it is at risk. We spoke to Cal Major, founder of Paddle against Plastic and Klean Kanteen brand ambassador, about the challenges, and what we can do to keep it pristine.

Mention Glen Etive to a certain sort of person and you are likely to be enthusiastically regaled with tall tales of long days on the hill, desperate moves high above gear on rough granite, big drops in small boats into deep pools and faster rapids and perhaps more recently, encounters with the world’s sky running elite – it is a place synonymous with adventure, a place that has been close to the hearts of climbers, runners, walkers, paddlers, photographers and more, for many years.

It is hard to visit Glen Etive and come away without a good story to tell. Set in Stone, the film documenting the exploits of legendary climber Dave Birkett – many of whose desperately hard E9’s waited years for a second ascent – also tells how he found himself surprisingly extended on a lowly 5a slab in Glen Etive.

In fact, the Etive slabs are a world-class destination – climbers new to this area would do well to heed Birkett’s experience on first acquaintance. And never attempt such routes on a calm or humid day in August. Delicate friction climbing and midges do not mix.

Among the kayaking fraternity, the River Etive still commands cult status. A succession of falls provides continuous fun or fear depending which side of the spectrum you’re on, while its clean waters, ease of access and rugged mountain backdrop make it one of the most popular and photogenic rivers to paddle in Scotland.

Golden eagles are often seen here. It is a wild place. The river – listed among the remaining 1% of entirely free-flowing rivers in the UK – remains an important spawning ground for Atlantic salmon. The glen is also home to otters, deer and in the sea loch below, a colony of common seals. It is, in so many ways, all that is best about the Scottish Highlands.

It may come as a surprise then to learn that all of this is facing a very immediate threat.

Sidetracked talks to Cal Major, the founder of Paddle against Plastic and a brand ambassador for Klean Kanteen, about the contentious hydro schemes recently approved on seven of the major tributaries of the River Etive. 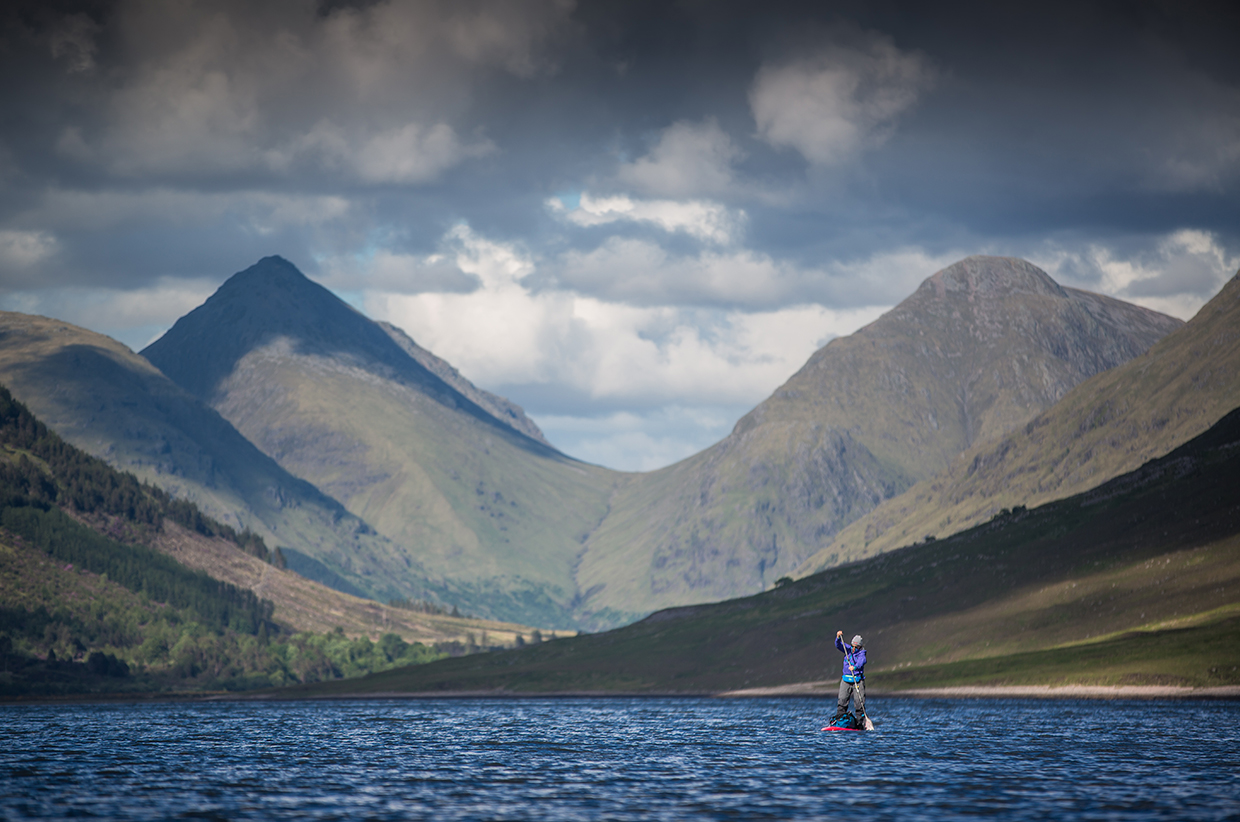 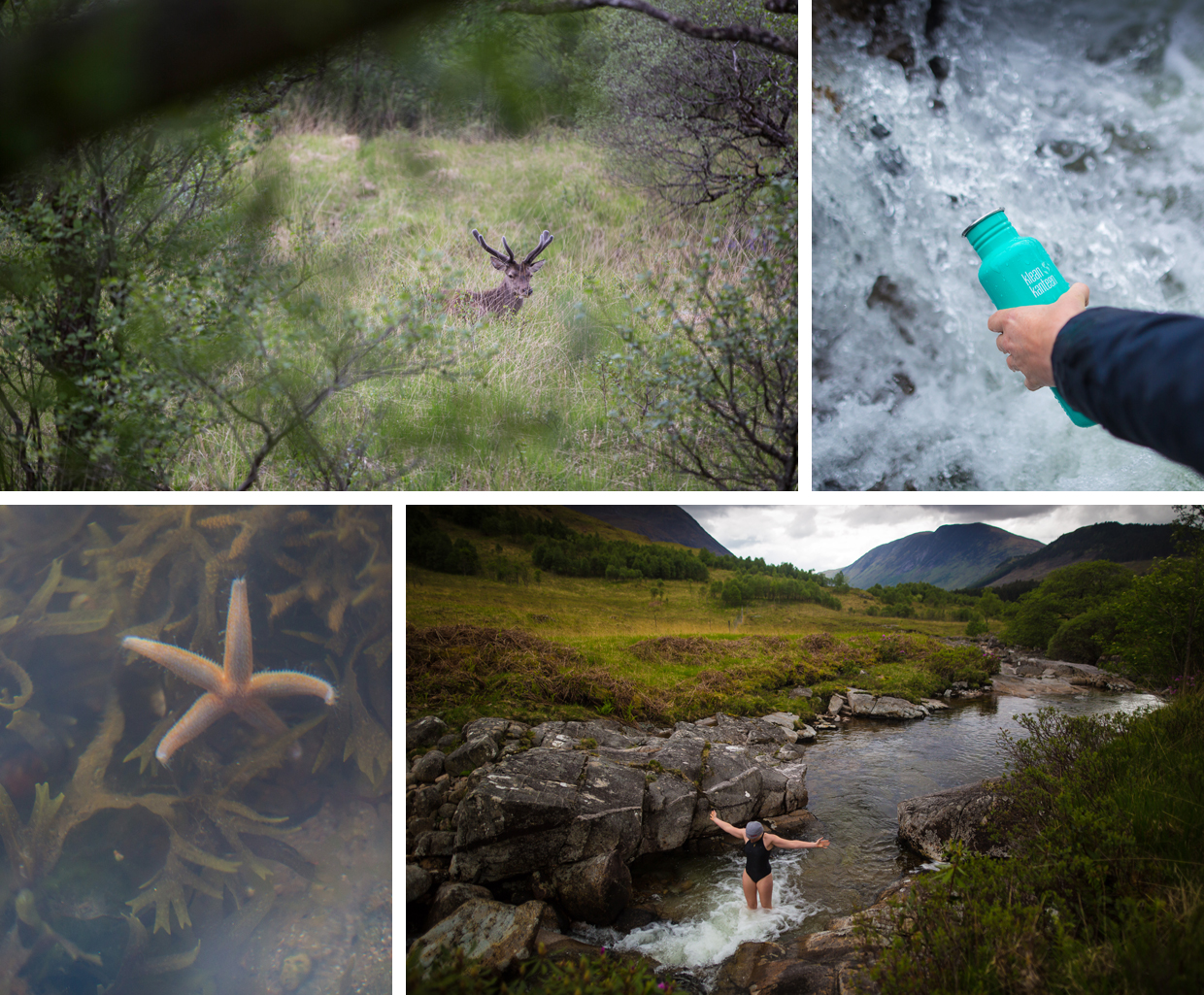 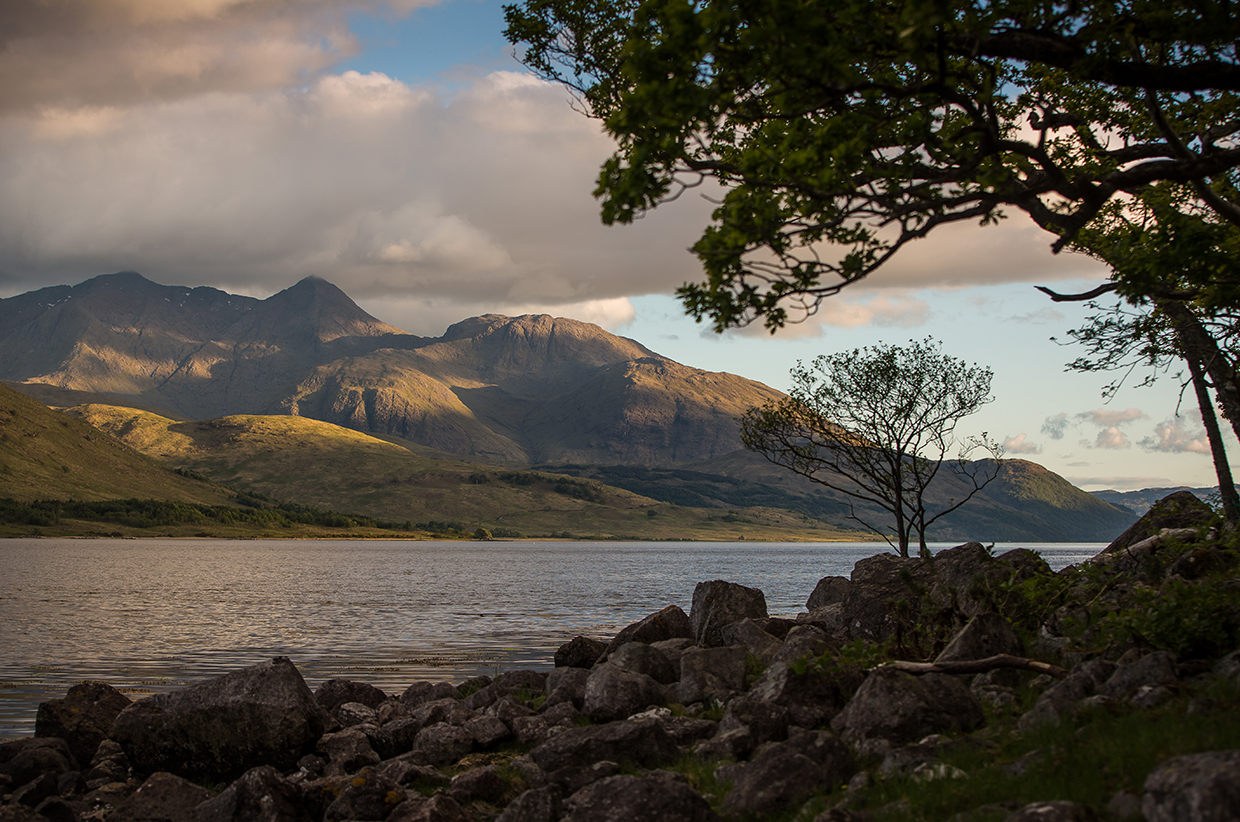 You recently visited Glen Etive and said: “It felt like a complete escape, a step into the wild and back to health.” What did you mean by that and what was it about Glen Etive in particular that meant you felt that way?

I’ll never forget turning off the main road through Glen Coe onto the narrow single-track of Glen Etive. It was like stepping out of our civilised, over-developed world and being transported back in time. It just felt healthy – the air so fresh, a whole ecosystem functioning as it was meant to, the mountains vibrant and the rivers clean.

One of my favourite quotes is something John Muir said: “Thousands of tired, nerve-shaken, over-civilized people are beginning to find out that going to the mountains is going home; that wildness is a necessity”.

It had been a busy and challenging year – a lot of travel and some amazing experiences but also some tense and stressful times. I’d never been to Glen Etive, but I really did feel at home, in a place where nature could just plod on at its own pace. To feel a part of that is healing.

Just before visiting Glen Etive, you’d been in contact with the people behind the Save Glen Etive campaign and Save Our Rivers. Can you tell us a little more about the campaign and how others can get involved?

Save Glen Etive is the campaign created by a small group of informed people, who have conducted detailed research into the seven hydro-schemes now approved in the glen. Working on a voluntary basis, the group takes no money from the campaign, which is entirely unfunded.

They set out a clear list of objections, including the fact that the environmental damage resulting from the dams means the development is simply swapping one problem – emissions, for another – the loss of biodiversity and vital ecosystem services.

You have to remember that in total, the seven schemes will be rated at 6.5 MW which is less than a single offshore turbine – the reality is that the amount of energy which will be created is so small, that actually all that is being achieved is the destruction of a unique area, which should have been protected by special designations for Wild Land, Wild Life and Natural Heritage.

I guess the most important thing is for people to recognise that dams are not a good thing. There is so much hype about renewable energy and too little consideration given to the negligible amount of energy produced in contrast to the environmental destruction schemes like this cause. With that awareness, hopefully there will be greater public pressure to resist schemes like this in the future.

Just over a year ago, Patagonia launched its Blue Heart Website and a campaign designed to protect the Balkan region from proposed hydropower projects. Do you believe the issues in Scotland and Glen Etive are the same?

I suppose there are some similarities, but these are very different areas and the impacts will be felt in different ways. Rivers in the Balkan region support entire communities whose way of life and very existence are dependent on the river.

Though much smaller in scale, the dams that will be built in Glen Etive will affect the way in which many thousands of ‘tired, nerve-shaken’ people engage with the area and while the dams are small, they are set to have a massive ecological impact. And because ecosystems are so complex, it just isn’t possible to accurately forecast the extent of the damage.

And it isn’t just the dams that are the problem. The Scottish Highlands are littered with bulldozed tracks and the scars of development. It will be heartbreaking to see this happen to Glen Etive. 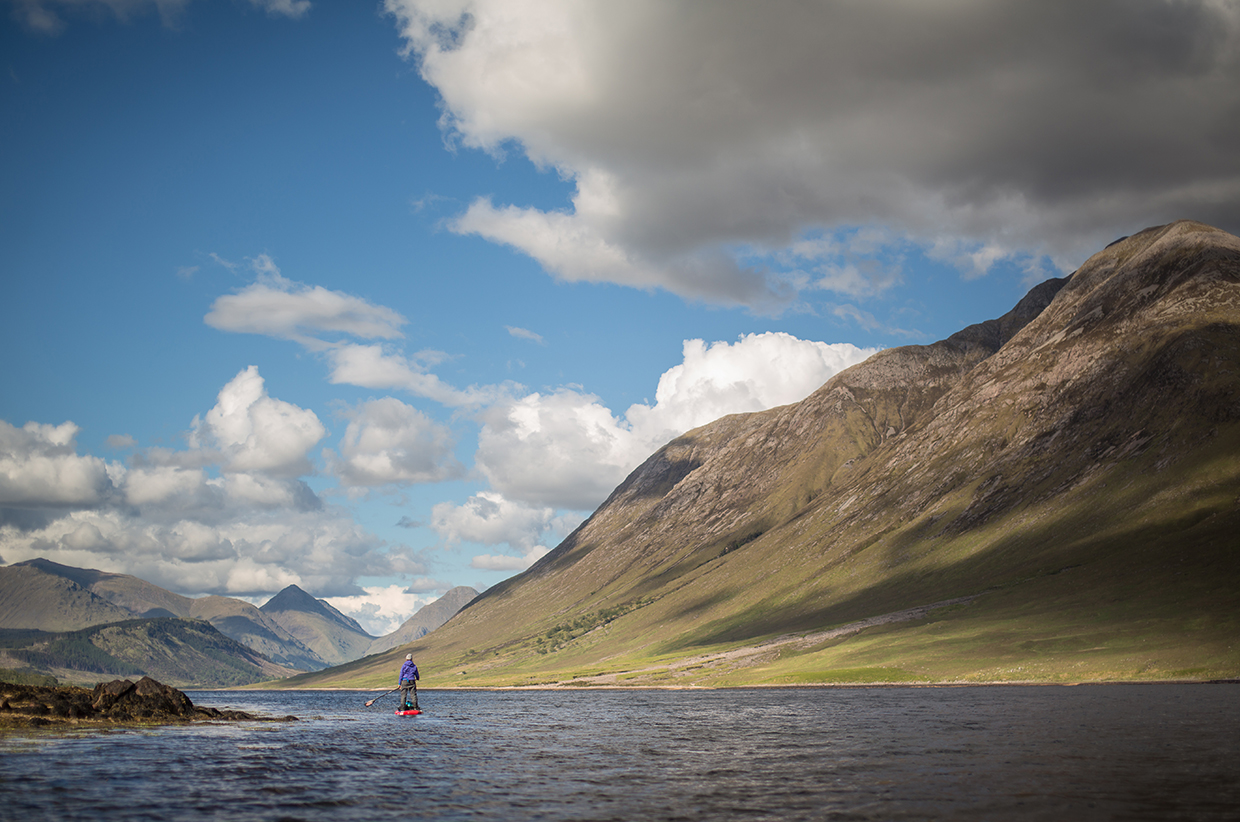 The seven hydro-schemes which will affect the tributaries of the River Etive have now been approved. Is it too late for Glen Etive?

I don’t think so. It’s really hard to understand why each of the seven schemes were viewed as individual applications rather than as a major development that would destroy the unique character of Glen Etive, but we can still have a voice.

At the end of the day we all have to take individual responsibility. If we can all consider ourselves as stewards of these special places, that is the first step. The next step is to petition for the protection. Write to MPs. Ask them to look at the evidence presented by campaigns like Save Glen Etive. Ask for schemes like this to be reviewed – they can still be stopped. Learn about the designations that exist to protect places like Glen Etive – National Scenic Area (NSA), Wild Land Area (WLA), and Special Protection Area (SPA) – and be clear that there is no place for major developments in these places.

In your opinion Cal, what needs to happen to stop this situation from happening in other wild places throughout Scotland?

Our wild places are more important now than ever – not just for the opportunities they provide in terms recreation and the health benefits so many people are recognising, but for biodiversity, for their role in mitigating climate change and because without them, our lives will be immeasurably poorer and actually, in the end, impossible.

It’s easy to feel overwhelmed but we can all do something small. And that something will lead to another thing. A letter to your MP, a beach clean – if we all take part and do something, together we can make waves. It’s the ripple effect.

Ultimately, it’s this individual stewardship and collective action to protect local areas as well as the wild places, that matters. This is what makes people feel part of the solution and able to make a real difference.

Meanwhile, it’s important to learn the lessons from Glen Etive and consider the impact of water abstraction on the river as well as the environmental damage and visual impact of pipes, intakes and roads in this unique glen. The way in which schemes of this nature are assessed must change and should not happen only in reaction to the proposals created by developers.

In the right place, renewable energy production is clearly a positive thing – in the wrong place it is not only disastrous but destroys the very things it is intended to save.

There is still time to sign the petition and add your voice to the thousands who have objected so far.

Perfecto Mundo One Woman Walking The World, From Bottom To Top – Lucy Barnard