Solo: In Isolation with Toni McCann 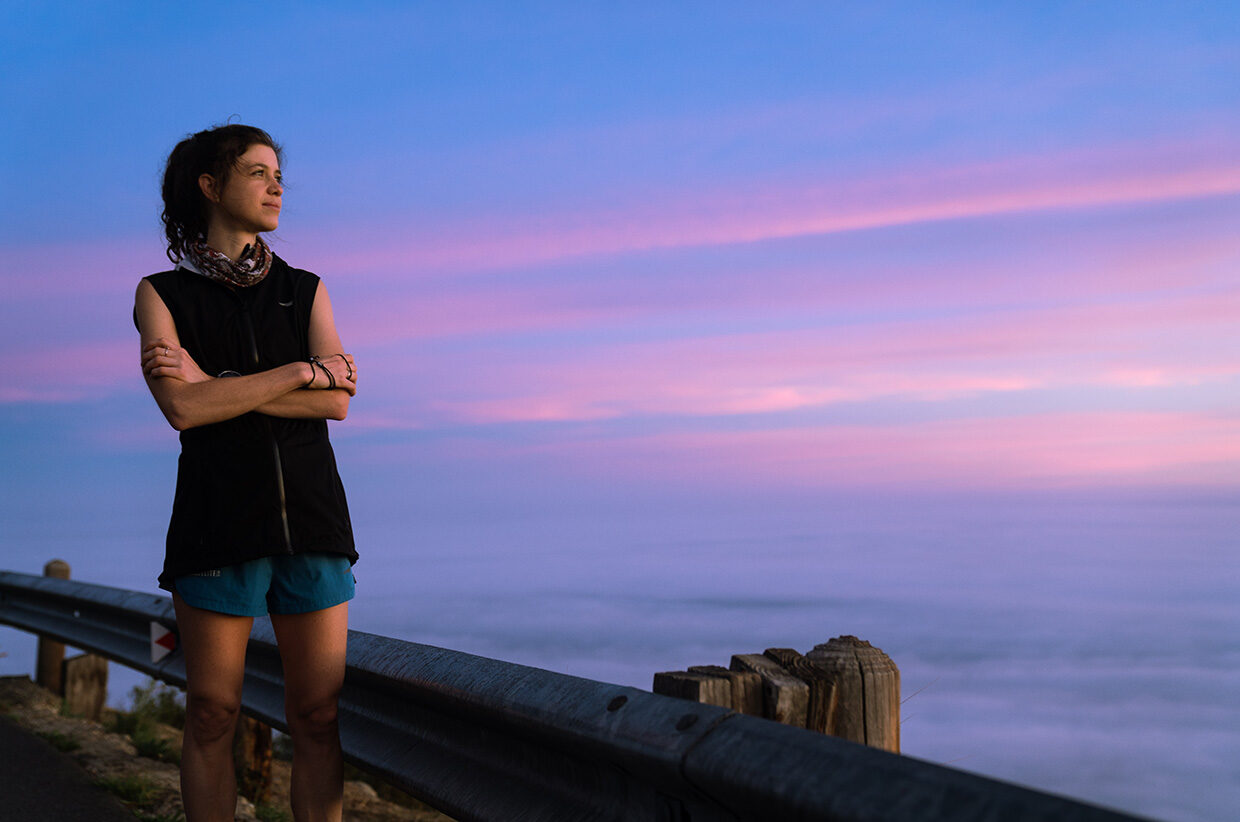 Filmmaker Damien Schumann presents Solo, a short film documenting the video diaries of trail runner Toni McCann during two months of isolation in South Africa, which was recognised as having one of the strictest lockdowns in the world.

Trail runner Toni McCann had high hopes of a podium finish at the World Skyrunning Series after dominating the field in 2018. But as the world descended into lockdown to help prevent the spread of COVID-19, she found herself alone and housebound in South Africa. While confined to her four walls, over 70,000 troops were deployed to enforce restrictions that if violated, resulted in heavy fines and in some cases prison. Here, Toni shares her experience. 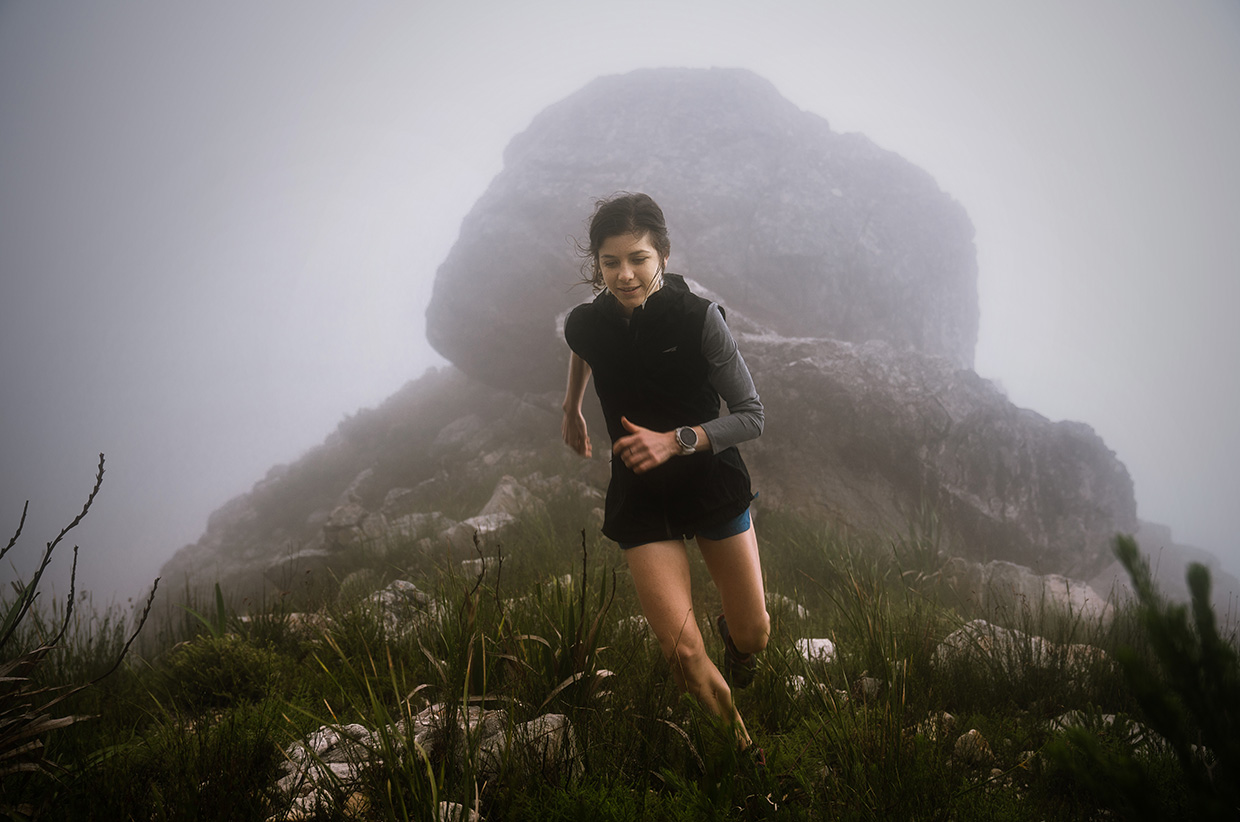 Sidetracked: How did Solo come about?
Damien: Both Toni and I had big plans for 2020, with Toni scheduled to race the World Sky Running series in Europe and Japan, and I was booked to run from London to Kigali as a campaign for Neglected Tropical Disease. As it became evident that we were not going to be able to travel we started brainstorming localised projects that we could undertake. So although we had no idea what was going to transpire, we were compelled to document the time. Toni always gives 100%, so what followed was a meticulously intimate video journal covering every aspect of her thirty five days of isolation, which became the foundation of the film.

Toni: For me, it really was just an outlet to use my voice because some days I didn’t do that. It was a nice way to make sure I was staying sane.

What made South Africa’s lockdown the strictest in the world? Can you explain how this impacted your day to day?
Toni: We weren’t allowed to leave our houses for anything other than medical reasons or to go to the shops. The government sent the military into some of the towns and lower income areas to make sure people were staying inside. There was a lot of violence and desperation. The lockdown was incredibly tough for so many people and I acknowledge that I had it really good. Not to say that it wasn’t difficult, but you have to acknowledge your privilege. It was a good wake up call.

And so what would happen if you were caught outdoors for non-essential things?
You would get arrested, have marks on your criminal record, and may go to prison for up to six months. If you were lucky, you would get away with a fine, but the fines were pretty steep. Post lockdown, when we were allowed out in certain areas between 6-9am, the fine for being caught on the mountain or on the trails was 2,500-6,000 South African Rand (Approximately £100-£300).

Why was it important for you to document these times?
Damien: I’m a storyteller by nature. It’s my tool to inquire, engage, and seek understanding. So for me, during lockdown, this was a way to make sense of the situation, and maintain a sense of purpose when our world had been turned upside down. Having spent many years documenting disease and conflict, and having spent extended periods of time in isolation, I knew Toni was in for a challenging time if she was going to isolate at home alone. But her character is one I was sure would turn it into a positive experience in the end. Something relatable that a larger audience can learn from. 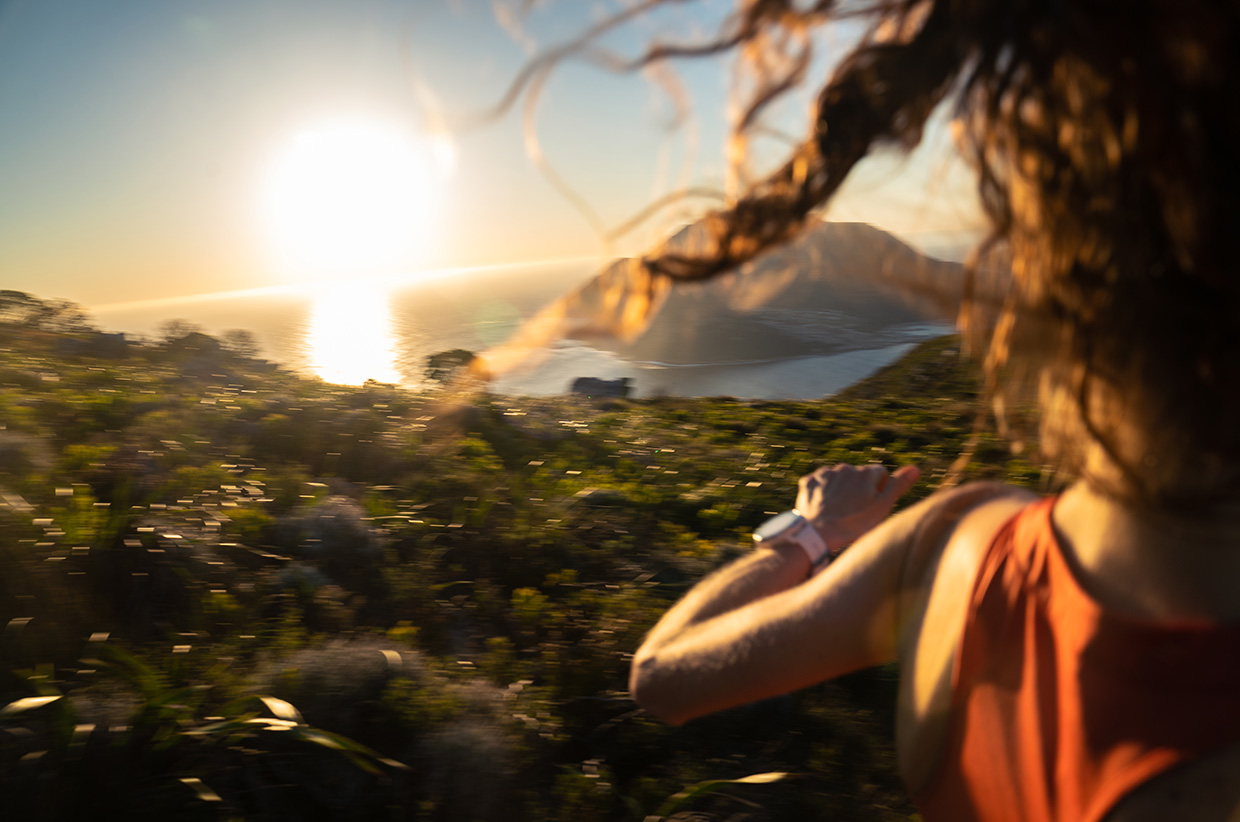 How did your perspective change in lockdown? What did you prioritise?
Toni: The most important thing for me was making sure I kept some form of routine every day. Making sure I woke up at the same time, made breakfast, sat down at my laptop, and did whatever work I had during that day. I also made sure I did things that I enjoy. I did a lot of puzzles, reading, baking sourdough. As long as I was keeping busy, it was fine. Without that, it’s so easy to lie in bed all day. Getting out of bed with a purpose definitely helped me to get through it.

Being active and outdoors is so important to you, how did you overcome feelings of losing your identity? What did you focus your energy on?
There was a lot of time for self reflection. Before I started running, I had so much love for food and cooking. Running took over so often I would resort to quick and easy meals. So it was nice to reconnect with that side of my personality.

What did you miss most about running?
The freedom of it. I live in a really busy part of town and running is a great way to escape the stress of life. To confront all of those things without running is quite difficult. I think the mountains offer so much comfort and solace. It’s a really great place to turn off and just breathe. The fresh air of the mountain is something you don’t get anywhere else. It’s a truly special place.

How did you find joy and success in lockdown?
Celebrating the people who were running marathons and ultra marathons in their backyards. To be able to support them from the sidelines was a cool way to keep the fire burning of my love for running. At a time when there is so much sadness and so much suffering, to be able to find joy in other people’s victories is a great way to make sure you are not getting sucked into a pool of despair.

You’re an independent person, why was this time alone so different?
There is a massive difference between loneliness and being alone. I was alone and a lot of the time I was lonely. But it was just my own thoughts. It’s so easy to pick up the phone and speak to someone when you are feeling lonely. Loneliness is a choice, whereas being alone isn’t.

You describe the feelings you get when running in the mountains, the air, the breeze, the prickles on your legs. Why does running in the mountains feel so good?
The connection with nature is so special. Cape Town has the most incredible trails so to be able to experience that in such a raw and primal way is absolutely incredible. It’s such a privilege to be able to run in those trails. To feel the rocks under your feet and to be so connected to the earth is just such a special thing. My wish is for everyone to experience it because it truly is magical. In order for everyone to experience it, we need to make sure we protect those areas. 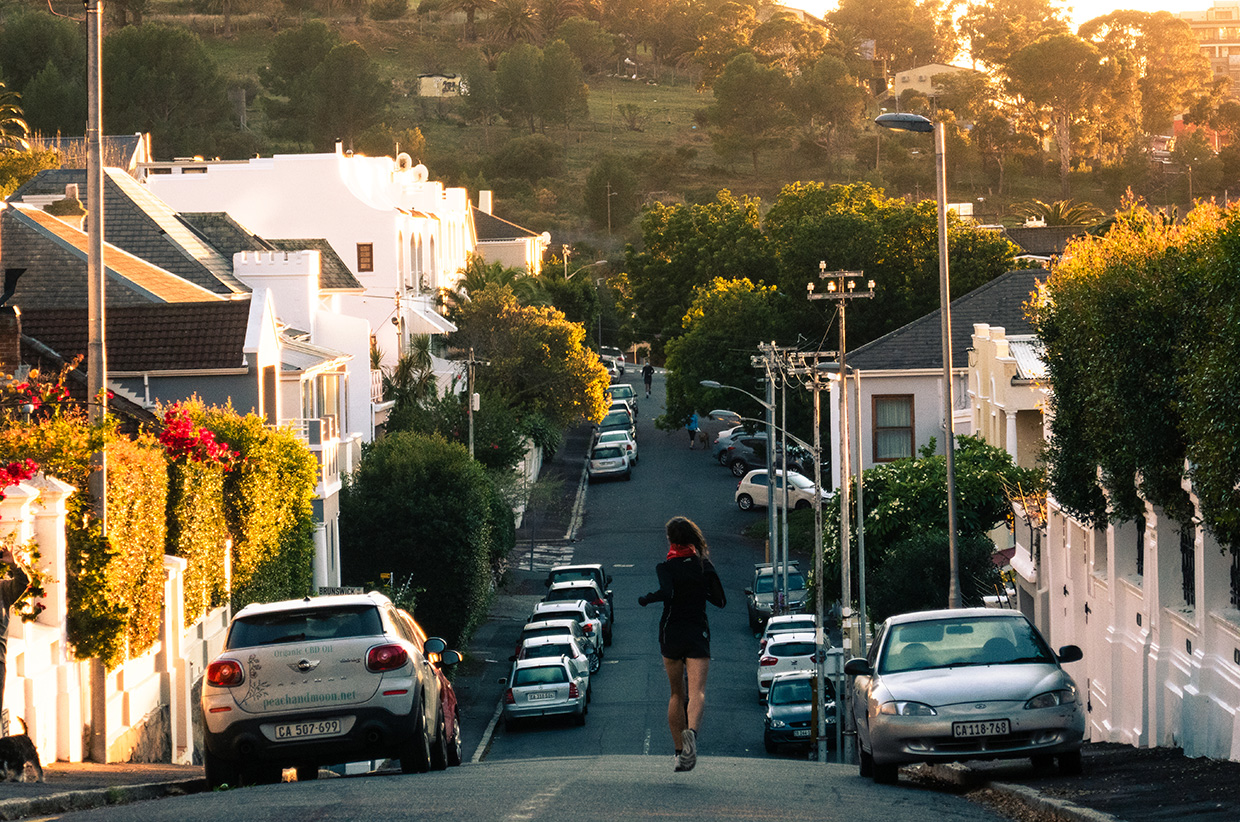 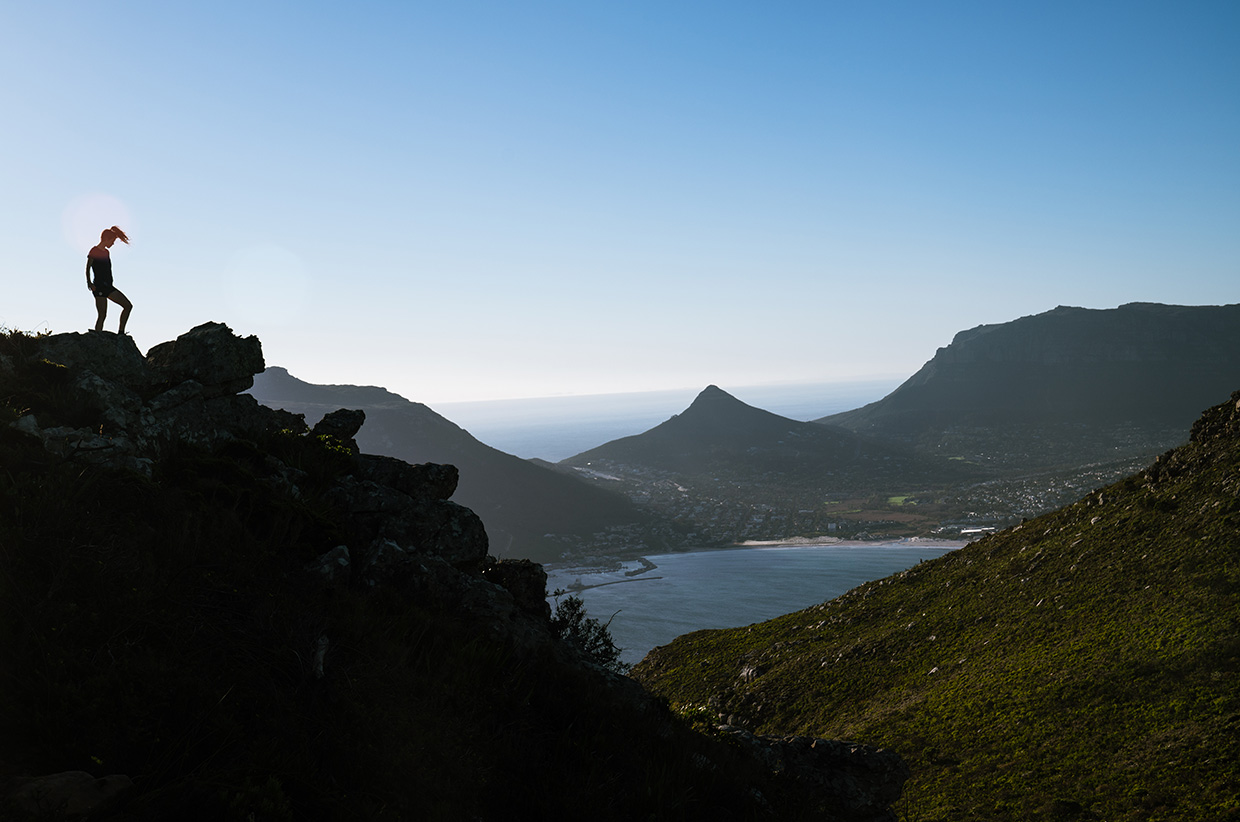 What main learnings/takeaways did you gain from the experience? Did anything surprise you?
Damien: I know that Toni used the filming as a form of therapy at times to work through what she was feeling. Waking up each morning and watching her video logs became a form of therapy for me as well as it became a pillar to reference my own experiences too. I admire the bravery it took to confess and confront the challenges she felt, and that in turn motivated me to take a stronger stance against my own challenges.

What does the future hold? Do you hope to compete in the World Skyrunning Series next year?
Toni: This year I’ll do one or two races if they are going ahead. But I am super competitive so whatever I do, I’m going to go in with the intention of winning. Next year if I’d love to run the World Skyrunning Series and hopefully achieve a podium finish. That would be the dream.

Toni is a proud supporter of BRAVE, an organisation that inspires and empowers girl leaders, supporting girl-led initiatives and building a network of women and girl leaders across the African continent. BRAVE uses the challenge of travel and adventure in wild places to create opportunities for girls and works with those who can provide the resources, knowledge, experience, and safety that girls need to lead.
brave-girl.org // @brave_rockgirl