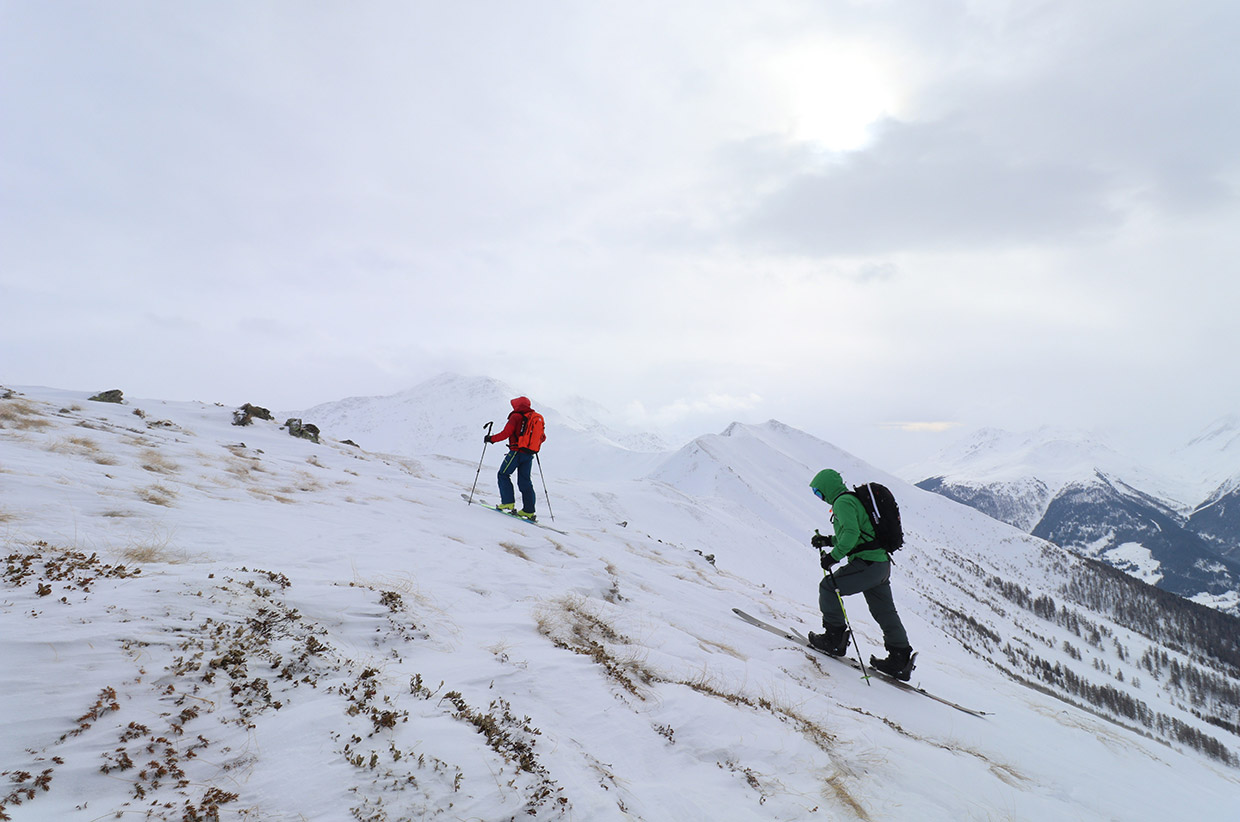 Maxwell Roche travels to Verbier in search of virgin powder. He adopts two heavily contrasting methods of backcountry access, and endeavours to uncover which is the better…

Huddling hard against the heli-blast I squint goggleless up towards the Aiguilles Dorées. Its iron-rich, red granite form scratches away at the billowing snow cloud like a clawing beast, revealing a brilliant sky above the Mont Blanc massif. My nose hairs crackle and fizz from rapid breathing, brought about by a sudden spike in altitude and drop in temperature. The welcome and familiar taste of a clean raw mountain wind mingles with exhaust fumes at the back of my throat. As the Eurocopter upends and falls away beyond the precipice a small measure of calm returns. Our guide, Gilbert, pops forth from his temporary snowhole, and with heavily frosted eyebrows addresses the crowd: ‘Nous sommes arrivés mesdames!’

‘We only allow expert snowboarders in the helicopter, guys, did you not get the email?’ Gilbert says, his English heavily accented.

I lock anxious eyes with my friend Piers across the minibus. We’re conscientious and pragmatic adventurers both. ‘No,’ I reply, ‘but the website said strong intermediates were ok.’

‘Not for the group drop, guys,’ Gilbert says with a stern look. After an incommodious silence he adds, ‘But I’ll make a special exception today, since conditions are perfect.’

Our guide is all business: ‘Harness, beacon, probe, shovel, boards, goggles, helmets, are you all set? C’est parfait allons-y team two follow me!’

The pilot lifts his glasses and winks cheekily as I climb into the cockpit next to him, whilst Piers and the rest of the team bunch up in the back seats. Seconds later, following a delicate surge of stomachs, we’re suspended high over dark snow-dusted spruce forest, making our whirly way up toward the source of Saleina Glacier, 3,519m high on the Mont Blanc Massif.

As I chew the tail end off a Tracker bar and stash the wrapper, my bare fingers tingle – the temperature’s well into the double negatives. French voices trickle back to me through the gloom. I crank the ratchets on my bindings and start to side-slip my board, following in fresh tracks. Since we’re set to descend 2,000m to Chanton atop a glacier, Gilbert has instructed us to follow in his tracks at all times. Fortunately, we’ve been equipped with harnesses, rendering us retrievable should a yawning crevasse do us a dastardly disservice.

Feeling slightly ill at ease I load my heel edge and come to a halt inches from what appears to be a near-vertical drop. As the gathering wind sweeps heavy clouds asunder, I see a giant snow bowl before me, washed in blinding sunlight and scooped like sorbet from the mountainside. Gilbert is waiting for me at the bottom.

Following broken bones, a year-long remedial period has elapsed since last I set foot on a snowboard, so it’s with some trepidation that I spin onto my toes and throw shoulders over the brink.

I catch the group and join the rear ranks for a narrow traverse between rocks below the Aiguilles. We round a rocky escarpment and spill forth from the bottleneck. Blinkered eyes, aimed at the floor in concentration, now rise to survey the panorama. Mont Dolent – a notable summit marking the tripoint between Italy, Switzerland and France – takes centre stage. Ribbons of cloud snag on the peak, like sheep’s wool on a wire fence. I squint in awe until the sun becomes a star and then drop chin to survey the immediate terrain.

Before us stretches the Saleina Glacier, four miles long, wider than 50 pistes and cloaked top to bottom in knee-deep powder snow; a heart-melting prospect indeed, except one dreadful detail. Our route has been torn to smithereens by a succession of skiers and boarders in the days before. Disappointment turns to horror as the 20 or so raucous GoPro-wielding renegades who accompany us blaze off ahead, shredding up every last remnant of untouched snow.

By mid-afternoon, after an enjoyable but by no means perfect day of boarding, we’re safely back with the minibus in Trient, enjoying a small glass of après vin rouge with Gilbert and the Adrenaline Heliski team, our dreams of untracked powder still beyond tangible bounds. 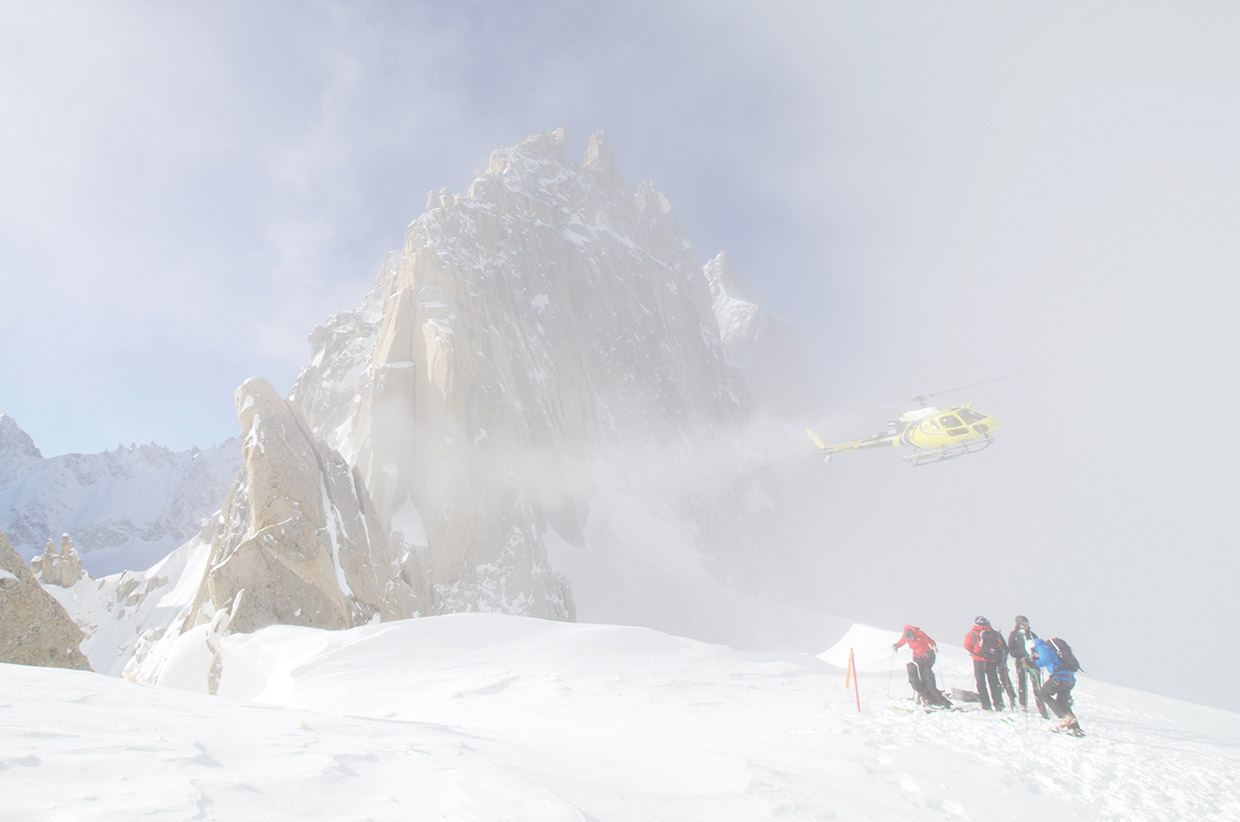 A far cry from the diamond-encrusted gilets and jacket-wearing bogeyed chihuahuas of Verbier, on the opposite side of the valley, is the contrastingly serene ski area of Bagnes. Nestled alongside the uppermost lift station in Bagnes is the quintessentially Swiss Restaurant de Moay. Wood smoke puffs gently from a solitary chimney on the restaurant’s low projecting roof as Piers and I scooch over from the lift. We lean our boards against the blackened larch facade and climb a trio of icicled stairs to the balcony. Against the far balustrade, behind a cloud of coffee steam and frozen breath, silhouetted against a milky monochromatic morning sky, sits a solitary figure. We walk over to introduce ourselves, and as we do so I can’t help but note how utterly still and peaceful the man looks as he enjoys the silence of the morning amid the elements of his birth. “Bon matin” he says as we take up seats around his table “I’m Christophe Berclaz, your splitboard guide”… and then with a curious smile “Va savoir pourquoi” (“your guess is as good as mine”).

Christophe leads us to the edge of a deserted piste and flashes his palms, bringing us to a halt. “D’accord garçons, now we prepare for the ascent”. At the breakfast table that morning we’d agreed to follow him to the summit of a mountain named Six Blanc, where, he has vowed, our dreams of carving lines through untouched powder would finally be realised. In the absence of Gilbert and his chopper, today we climb under our own steam, a reality which, after the chaos of the Saleina Glacier, we are both rather relishing.

Under the close instruction of Christophe, we commence the simple, if a little fiddly, process of preparing our splitboards for the ascent. First, we remove the bindings and set them aside; this allows us to then unclip the boards down the middle, creating as we do so, two separate skis. We then reattach the bindings via a toe clip, one to each ski, facing forwards rather sideways. Finally, we stretch a hairy fabric called a skin over the bottom of each ski to give us the traction we require to progress up hill. The process takes all of about fifteen minutes, but Christophe assures us seasoned splitboarders can do it in five. With the flourish of an orchestral conductor Christophe signals for us to follow. Soon we are marching single file, encased in grey and white, making steady and satisfying headway skyward.

After three hours we’re nearing the summit of Six Blanc, it’s outline eerily backlit like one of Turner’s famous oils, faintly discernible amidst the pallid gloom. A furious, ever-strengthening wind has driven and compacted snow up toward the summit cornice. As we traverse to gain our desired approach route the tough crust makes it increasingly difficult for us to sink our edges and stay upright. The steepening terrain and heightened chance of a sideways slip toward the abyss forces us to abandon skis altogether, strap them to our backs and climb straight up, on all fours, kicking steps as we go. Aerobically challenged for the first time, I focus on my breathing and feel the blood retreat slowly from my snow-sunken fingertips. “Ça te changera les idées” (“takes your mind off things”) cries Christophe in his idiomatic Swiss fashion from the slopes above. ‘He’s right’ I think as we negotiate the last few feet to the summit. For the first time since landing in Switzerland, I’m lost. Together with close friends, tussling with the elements, insignificant specs on the mountain, keeper of incredulous souls, just us and our wits, burning calories not fossil fuels, steadfastly seeking powder snow, that ethereal matter; gateway to the most singular of sensations.

Boards rebuilt, back under our feet and pointed down the perfectly powdered mountain, Piers and I wait for the green light. Christophe’s peremptory pole go’s up, almost indiscernibly, a long way below. The corners of Piers’s mouth dart towards his ears in merriment. I slap him hard around the head and set off quickly downhill with an excited “Yeeew!”.

For the next four hours we chase Christophe back to Bagnes. As he jumps expertly yet awkwardly from side to side trying to avoid sinking his skis in the deep snow, we lean back on our boards, forget about edging, and with subtle sweeping motions float weightlessly in his wake. The airy and enlightening sensation is enhanced yet further as we drop down from the higher slopes and bounce across the feather pillowed floor of the high contrast forest. As we pull up under an evergreen, crack the thermos and take a moment of respite, a gentle snow begins to fall. Piers uncorks the flask and the fragrance of roasted beans mixes with earthy larch bark. “Votre santé” says Christophe as we touch cups and take sips of the warming draught. Muscles aching pleasantly, I struggle to remember a moment of greater contentment. Thanks to Christophe, and the ingenious invention that is the splitboard, we’ve found the ethereal matter we came looking for and surfed its silky surface like never before. 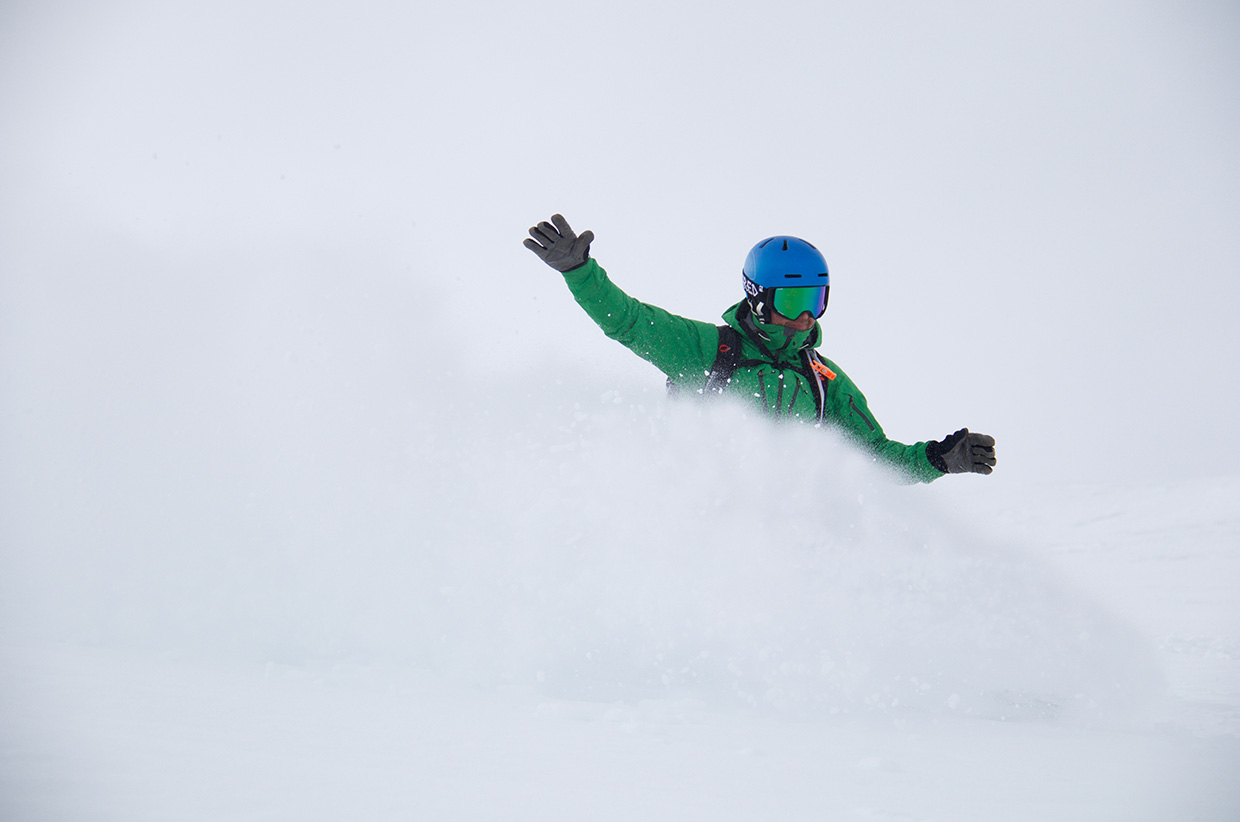 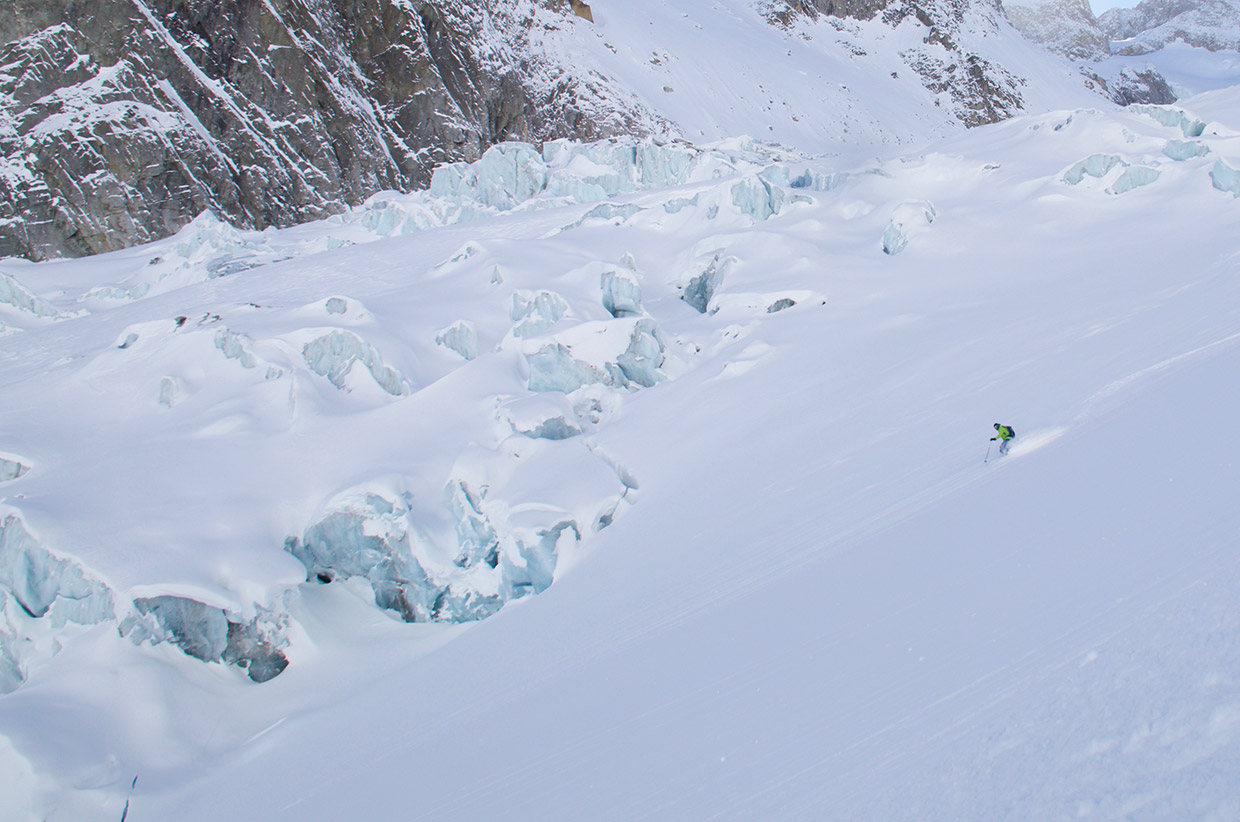 Over a fondue later that evening Piers and I come to the conclusion that, despite the fun, thrill and glamourous allure of the whirlybird, the only truly fulfilling way to seek out hidden, boardable, powder-glazed terrain, is under one’s own steam. Helicopters have the capacity to unlock many hours, even days, of perfect snowboarding in a matter of minutes, but it’s almost too easy, not to mention pricey. Furthermore, pain is often in accordance with gain, and any gain obtained via the copter is tainted with guilt, environmental ramifications considered. Given that snowboarders, when descending at high speeds, are inclined to keep their eyes focused on the snow, I think it’s fair to say, making steady progress upwards on foot/ski before the descent, ensures that the beauteous environments within which we undertake our sport, are fully appreciated, and not tragically missed. The journey we found to be as enjoyable as the destination.