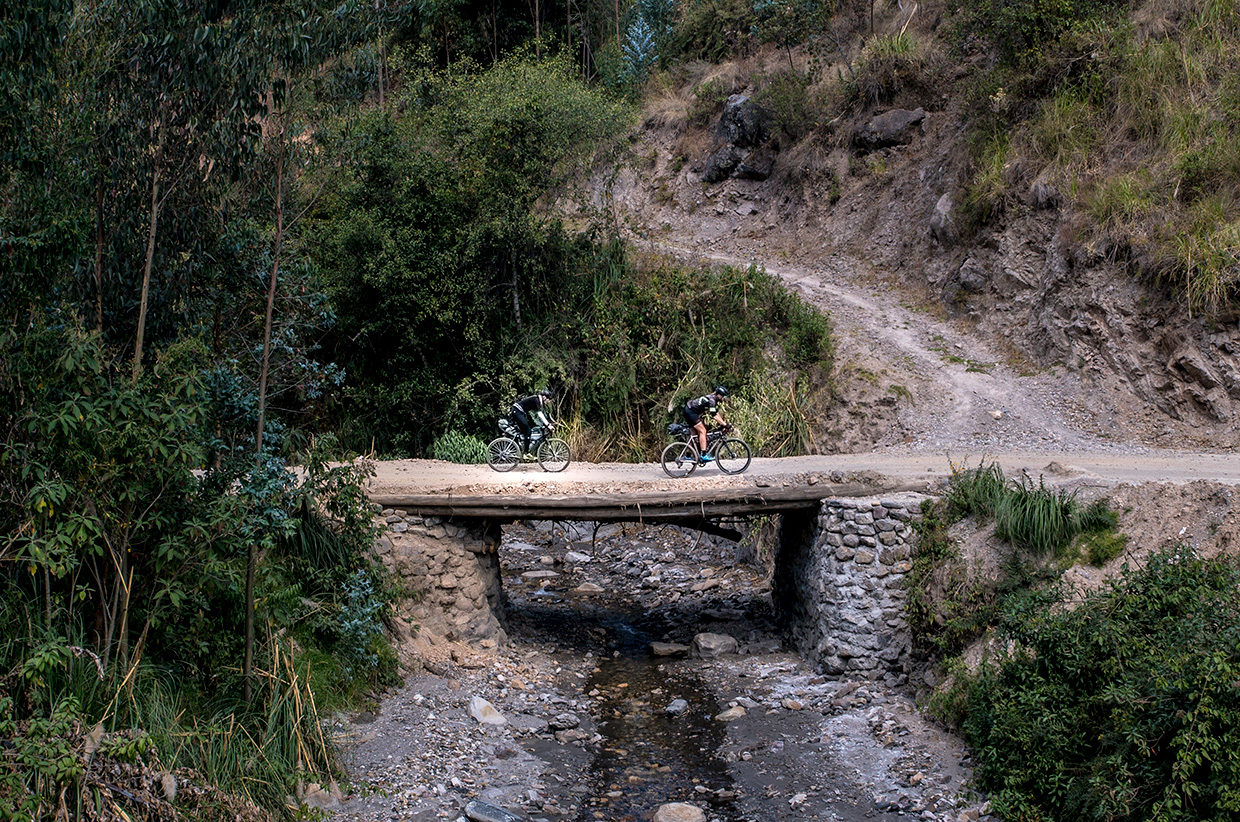 The Andes mountain range stretches for an incredible 6,000km down the wild blue Pacific coastline of South America. These mountains have peaks reaching up to Everest-bothering heights, diverse ecosystems, and a fascinating history. From 1438 to 1533 the Inca people made a large portion of western South America their home, with many living in the Andean mountain range. Ancient trails, once used for relaying messages between tribes or for tactical purposes in times of war, network across this huge and wild region. The invasion of Spanish armies eventually led to the downfall of the Inca Empire. However, the knowledge of the mountains and the trails they left behind live on, and the Andes have become a Mecca for outdoor enthusiasts, nature lovers, and adventure sports.

In 2017, the newly formed BikingMan ultracycling series made the Andes the location for their inaugural bikepacking race. The original route took the riders on a 3,500km journey from Quito to Ecuador and across the Andes Cordillera. Since then the race has changed location, distance and route. It now starts and ends in the busy coastal town of Trujillo. And it’s here we found ourselves, in July 2019, to film and photograph this mind-boggling, gravel-crunching 1,600km cycling race across the Andes.

The riders, BikingMan team and media gathered a few days before the start at a hotel nestled in the backstreets of Trujillo. With its crazy traffic, bustling markets, and old town square, it’s a far cry from what the riders will face once away from the coast and up into the mountains. But although the cyclists are there for the wild scenery, they must tackle the notoriously dangerous Peruvian motorists and the infamous Pan-American Highway. The race starts before first light and the riders are soon away from Trujillo and heading north up the highway. Still bleary-eyed from a short night’s sleep, they glide their way up the endless, fog-bound strip of blacktop – a vast road that connects the west side of South America like an arterial vein to countless cities and towns along its way. A perilous place to be on a bike.

As the sun rises, the cyclists catch their first enticing glimpse of what the race has in store for them. To their left the Pacific laps against huge empty beaches and sand dunes, and to their right are mountains partly covered with sand blown inland from many a wild Pacific storm. Onward the riders move, heads down, concentrating on getting this first hazardous section behind them. Eventually the hazy morning sun, partially obscured by a dust-laden sea mist, rises high into the sky – and as noon arrives the cyclists change course and steer their bikes east towards the lowlands and rural areas of the Andes. Even by this early stage of the 10-day race, the cyclists have already covered 150km. But with another 1,400 to go, the end is still a long way off. 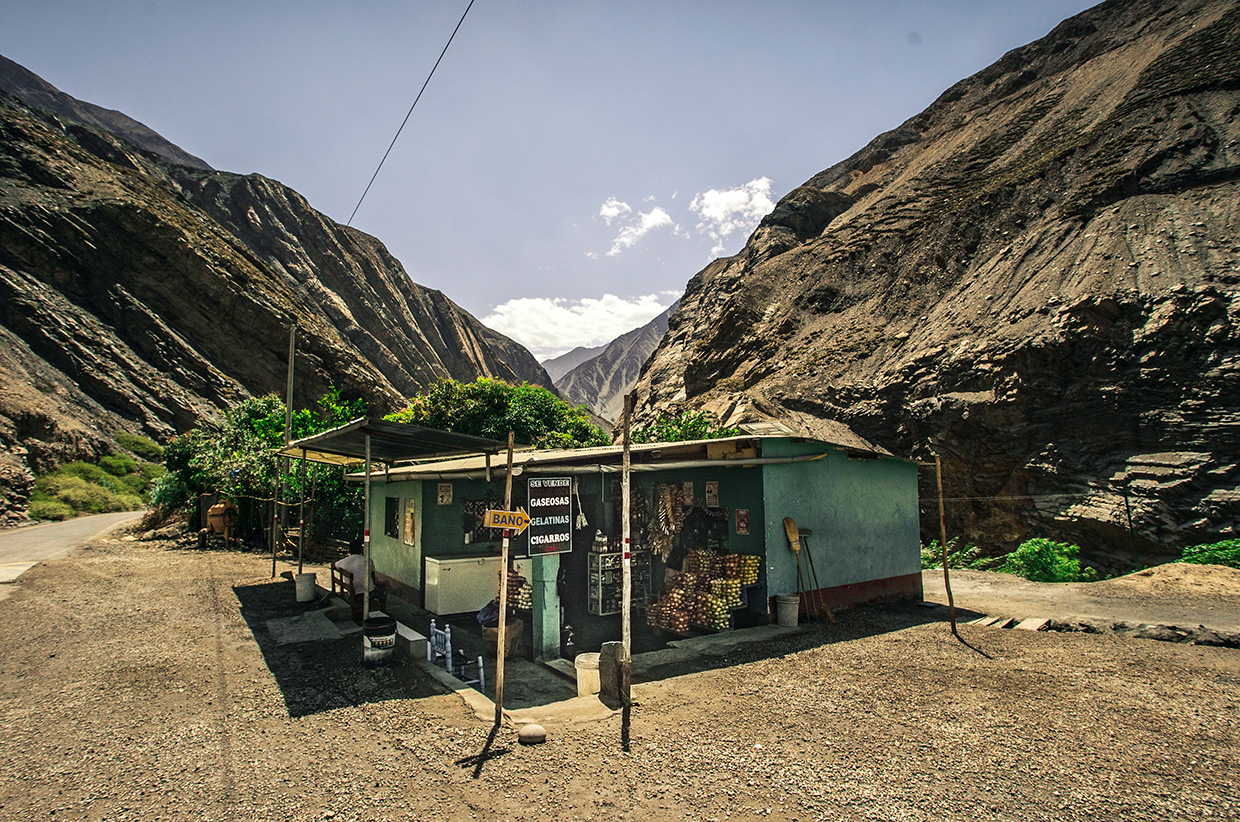 Through the foothills and farmlands the riders gently gain altitude and cycle through ever-changing scenery, becoming more dramatic as the days go by. The tiny villages consist of mud brick dwellings and ramshackle timber barns; free-roaming animals and inquisitive locals are a curiosity for any westerner travelling through these parts. With every turn one is presented with a scene straight out of a National Geographic article. Andean women go about their daily lives dressed in brightly coloured, hand-woven shawls made from alpaca wool, and wear impressively high hats atop jet-black pigtailed hair. Weather-worn men slowly follow herds of cows on dusty rutted tracks, while children play seemingly without a care in the world. In the distance vast mountains stand unmoving – silent, snow-capped guardians of these timeless villages.

By day three we are now starting to enter the high Andes, with the altimeter registering 3,500m and rising steadily. Roads snake up mountainsides. Tight, winding switchbacks become a constant feature. The cyclists must start managing their energy levels carefully and the planning of food and rest stops becomes a priority. One evening we meet and stay with around 10 riders in a village some 3,800m up. The night air is cold, thin, and incredibly still. We all meet in a basic but beautifully rustic restaurant to feast on local broths and hot welcoming tea, exchanging tales of the big adventure across an old worn table, and the air is filled with an intoxicating cocktail of adrenaline, excitement, and a warm feeling of togetherness. Although this is a race, there is a unique bond between the cyclists that grows with every mile that passes under their dusty tyres.

The weather in the high Andes can really surprise. Daytime in July can be hot and dry, but by the early hours the barometer will often swing violently and the air can plunge below zero. This presents problems for the riders. Packing lightly is key to saving weight and therefore energy. There’s only so much space on the bike, with much of it taken up by all-important water, food, and spares, leaving little left for warm clothing. Eventually, after days of cycling through steep forested valleys and rugged farmland, they climb higher and into the Punta Olimpica. We enter an area where you could easily imagine dinosaurs roaming about: a remote glacial valley with a river winding its way through, and flanked by mountains of up to 7,500m. The road heads straight through its heart and up to the highest pass of the race at just under 5,000m. At the top of a series of incredible switchbacks, we stop to look back down the valley. Camera shutters click and drone blades whir as we try to capture the wonder before us. To our backs an impenetrable wall of ice rises up within a stone’s throw away. To be this close to a moving glacier injects the adventure with an added air of jeopardy. 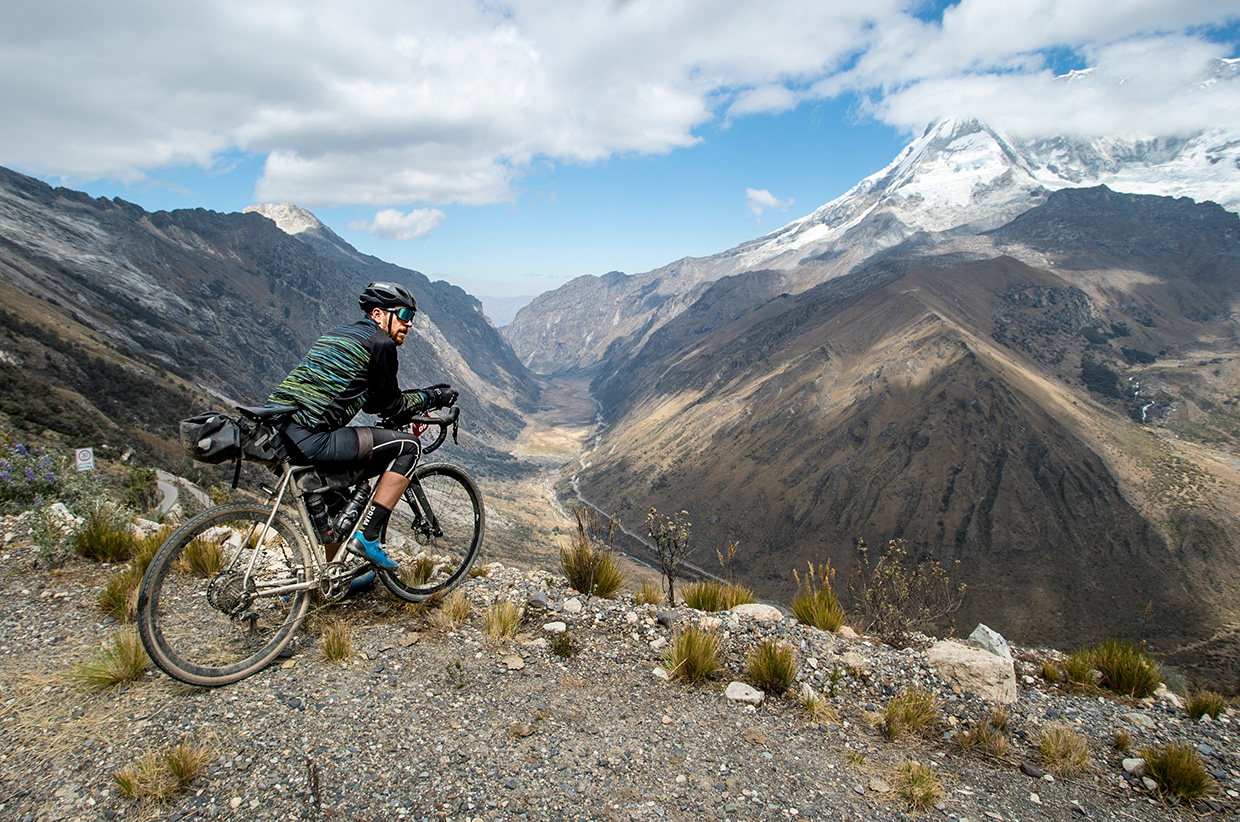 We soon descend through the other side of yet another area of huge valleys and impossibly beautiful vistas that stretch out ahead of us as the race heads into the heart of the Andes. At the end of another day we find a lone settlement next to a lake, surrounded by mountains so impressive that they are almost too much to take in. If you can imagine the best view in the Lake District or Scottish Highlands and turn it up by 10, you’ll be getting close. The owners of the smallholding make a living from rearing wild stock that roam free amongst the unfenced, rugged landscape. When we turn up in the late afternoon we catch them riding on horseback, followed by two dogs as they make their way around the lake edge to make one last check of their sheep before they head home for the day. Their smallholding also provides basic shelter and wholesome meals for any traveller that may stop by on this remote route through the mountains.

That night we are treated to a meal of fried fish caught from the lake just next to the dwelling, and cold beers. We eat in the kitchen with its worn stone floors, a low crooked ceiling, and a bubbling pot over an open fire. Although a language barrier prevents long conversation, basic words are exchanged along with warm smiles and friendly gestures after a hearty meal and another incredible day in Peru.

Just before we turn in for the night, we take the opportunity to photograph the night sky in all its splendour. Because of the complete lack of light pollution, the impossible beauty of the Milky Way wows us; we capture the best dark-sky images we’ve ever taken.

We eventually arrive at the Huascarán National Park, which holds in its heart the longest and most impressive valley I’ve ever witnessed, with yet more glaciers, and – to add icing to the cake – herds of roaming alpacas. This area of incredible natural beauty is a place that just begs to be explored. And although this vast mountainous region is surely a playground for anyone keen on adventure sports pursuits, we hardly see a soul. In fact, other than the cyclists in the race we only see a couple of other groups of bikepackers, including three students on a cycling gap year. The Andes are so huge that the likelihood of seeing other hikers or cyclists is slim. 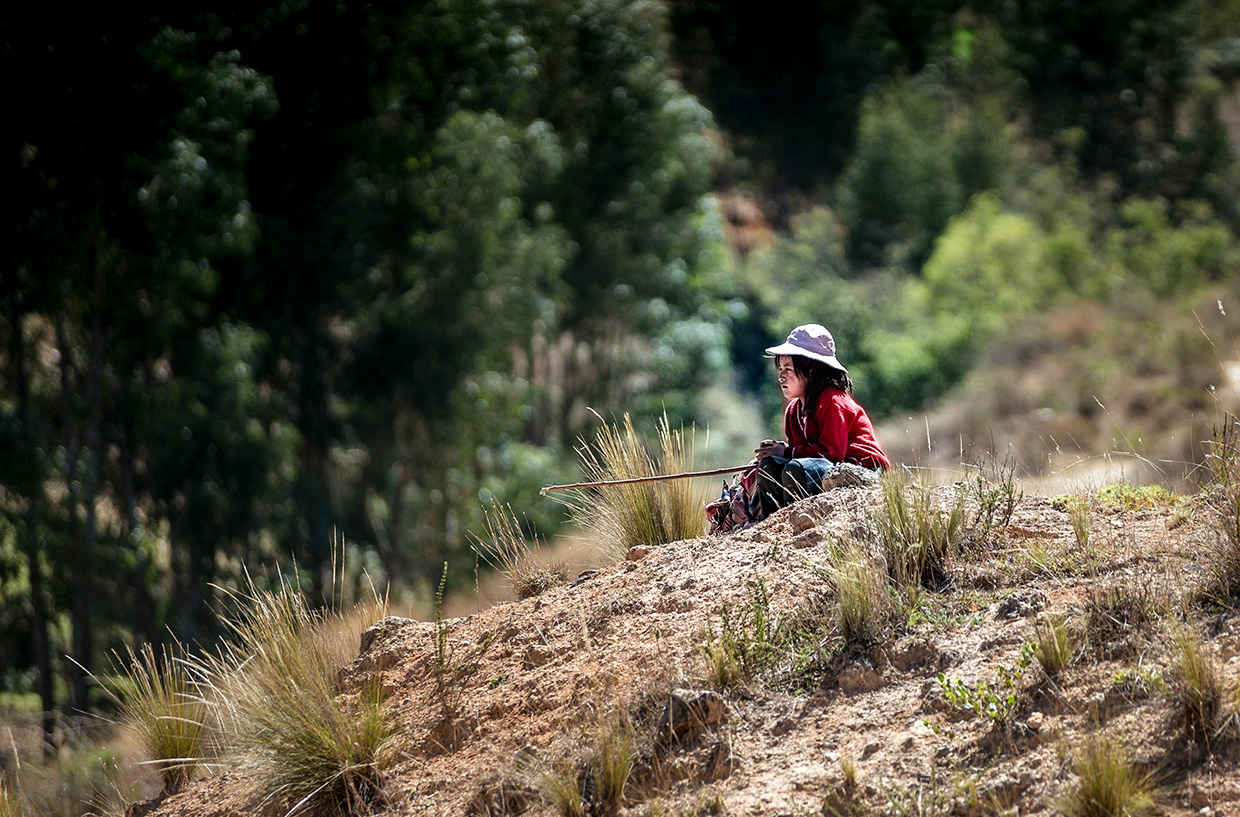 The BikingMan race is now in its final throes. Looking worn and dusty, the athletes roll on along gravel-laden mountain tracks, the finish line now within tantalising reach. But one more standout landscape is still to come. Snowmelt-laden waterways find their way through the path of least resistance, and many converge to form the mighty Rio Santa river. And it’s this raging torrent of ice-cold water that has over the millennia created the imposing Cañón del Pato, monstrously deep, with steep-sided walls that reach up thousands of feet above the canyon floor. The road follows the natural course of the water for hundreds of kilometres. In many places a sheer drop – with no barriers – threatens an instant end for anyone that should wander off the road. Rockfalls also crash down along this hazardous but stunning canyon, and in places boulders nearly as big as cars sit in the middle of the road.

Here and there, the road has no place to go but through the sides of vertical cliff faces. Roughly cut tunnels, with no lighting and a single lane – meaning no room for two vehicles passing inside – these stone-cut gaping mouths are no place to be on a bike, especially at night with an oncoming truck sharing the same tunnel. Timing is everything when approaching. Keeping your ears pricked is key – many local motorists will use their horns to warn of their approach. As darkness falls, we spend a few hours driving in poor light, and decide to call it a day. We spend the night in a sleepy canyon town perched on the side of steep stone walls: a last rest before the final full day following and filming this incredible bikepacking adventure.

Finally, after a day and a half of travelling down this vast crack in the Peruvian earth, the river fans out into a wide, serene delta, a network of meandering shallow streams that span for miles, fenced in by gentle hills with the mountains now far in the distance once more. Farms and villages begin to appear as the land becomes flat and more manageable. And further in the distance, hovering in the air like a vast ghostly apparition, the coastal mist awaits the cyclists’ return and the final push up the Pan-Am Highway to the finish line. 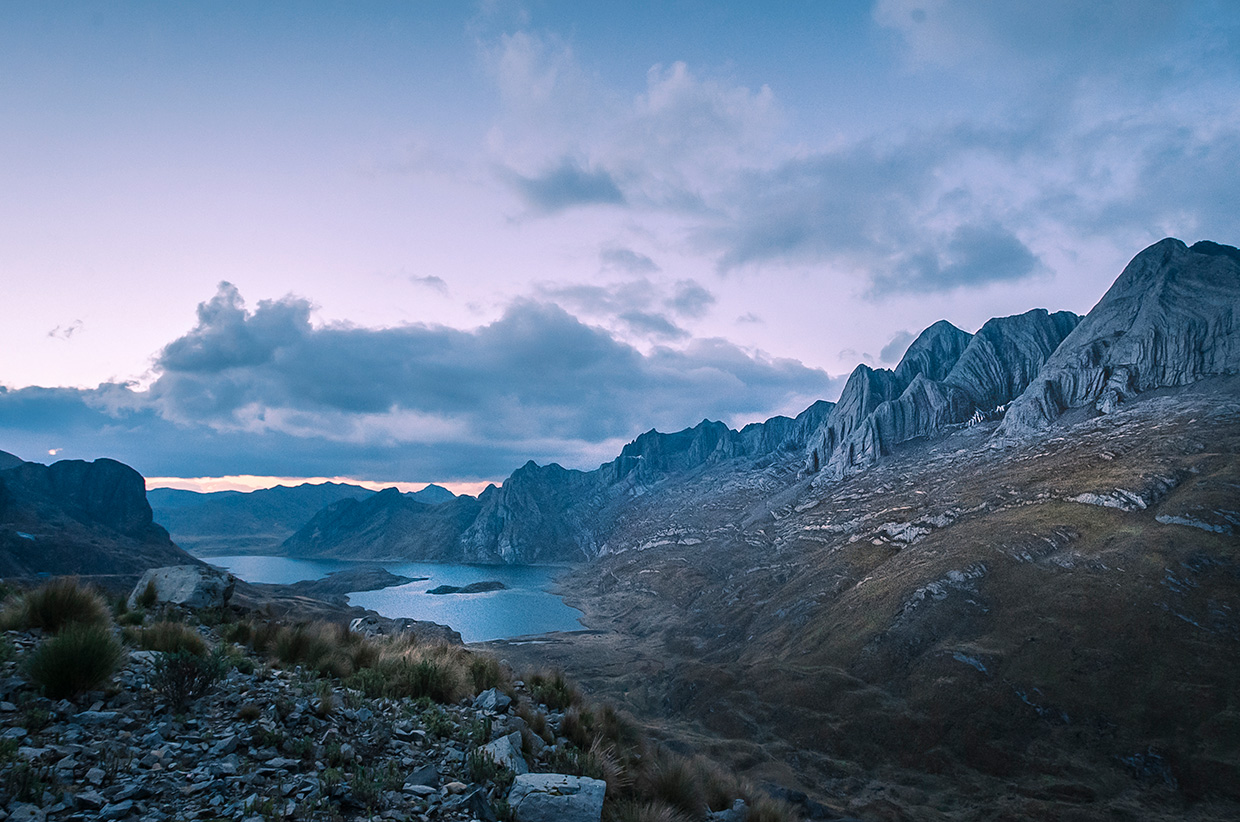 Eventually, one after the other, with some gaps between riders spanning half a day or more, they roll triumphantly across the finish line back in the town of Trujillo. Not all complete the race. Many scratch due to exhaustion or bike failure. But those that finish can take away memories of an extremely special adventure race in such a beautiful location. And, from our filmmaking and photography perspective, we will treasure our time in this spectacular place high up where the alpacas graze and eagles cry.