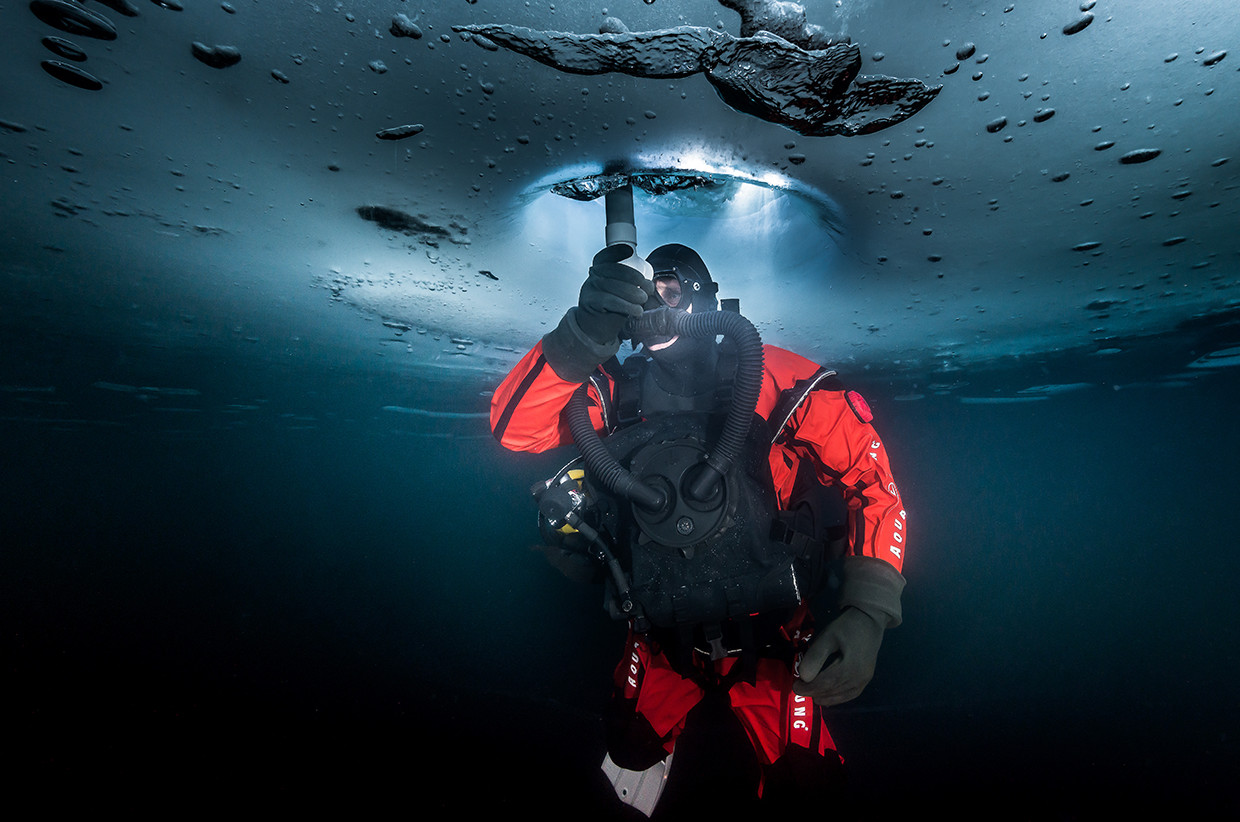 French explorer Alban Michon is on a mission. His mission is to solo cross by kite surf and arctic dive along the Northwest Passage, the sea route that connects the Atlantic and Pacific oceans through the Canadian Arctic Archipelago. The adventure begins in early March 2018 and is set to finish some two months later. Alban will start from Resolute Bay in the Nunavut region of Canada travel 1,240 miles tracing the route of Norwegian Roald Engelbregt Gravning Amundsen who, with his crew, was the first person to cross the Northwest Passage in 1906. We caught up with Alban before he set off to the Arctic.

Where are you right now and how are you feeling before your challenge?
At the moment I am in the French mountains, in Tignes to train for my next expedition. I’ve been doing a lot of under the ice diving, camping in the snow and snow kite practice which will be my means to move around in the Arctic. The rest of the time I live in South of France in Ile de Giens. I can’t wait to start my next expedition. I have been preparing for this expedition for two years now. I have visualised it so much in my head that I am very excited to finally be able to depart.

Why did you decide to do this challenge? How did the idea come about?
I do expeditions because I want to serve. It is my way of contributing to preserving the environment. I am not interested in sporting challenges, or being the first in exploration, but rather to be at the service of science and share the beauty of our planet with other people.

In 2010, I was on a North Pole expedition. It was a harsh environment, very hard conditions, but it was an incredible adventure at extremes temperatures. And then in 2015, while I watched on television a programme where a big Russian icebreaker was taking Chinese passenger to the North Pole at almost exactly in the same location where I was five years ago. The programme showed hundreds of tourists getting off the boat and making a huge barbecue for everyone while listening to music. I was in shock. In five years we went from extreme adventure conditions to a tourist destination. So for me, climate change is pretty real. At that moment I understood that if we want to make a difference, capture the imagination and empathy of the general public while raising awareness of climate change, nothing is better than through images and facts. Much better than just a speech.

That was when I decided to do this new expedition, not for just an adventure’s sake, the pursuit of extreme physical strength or to be alone for three months, I want this exploration to be at the service of science and general public, share with them the beauty of the ice, and of this world that we live in. 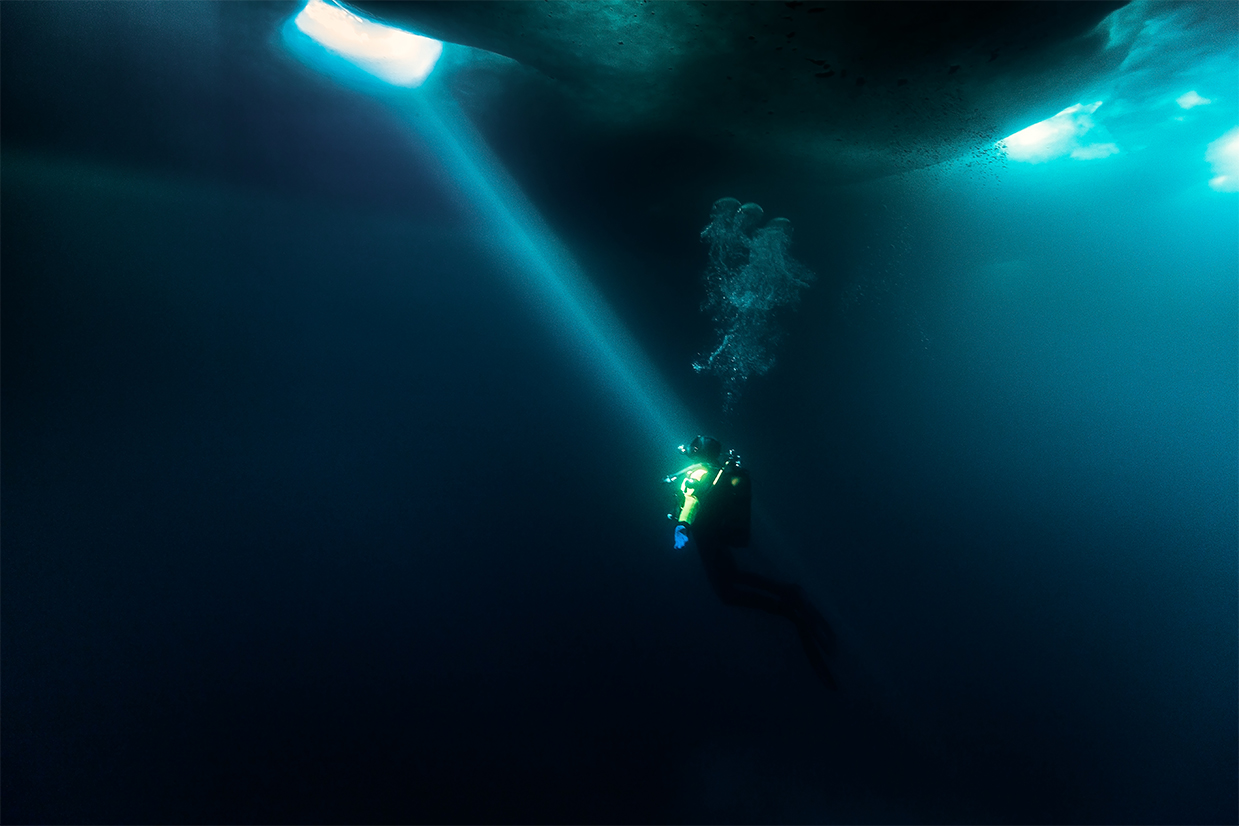 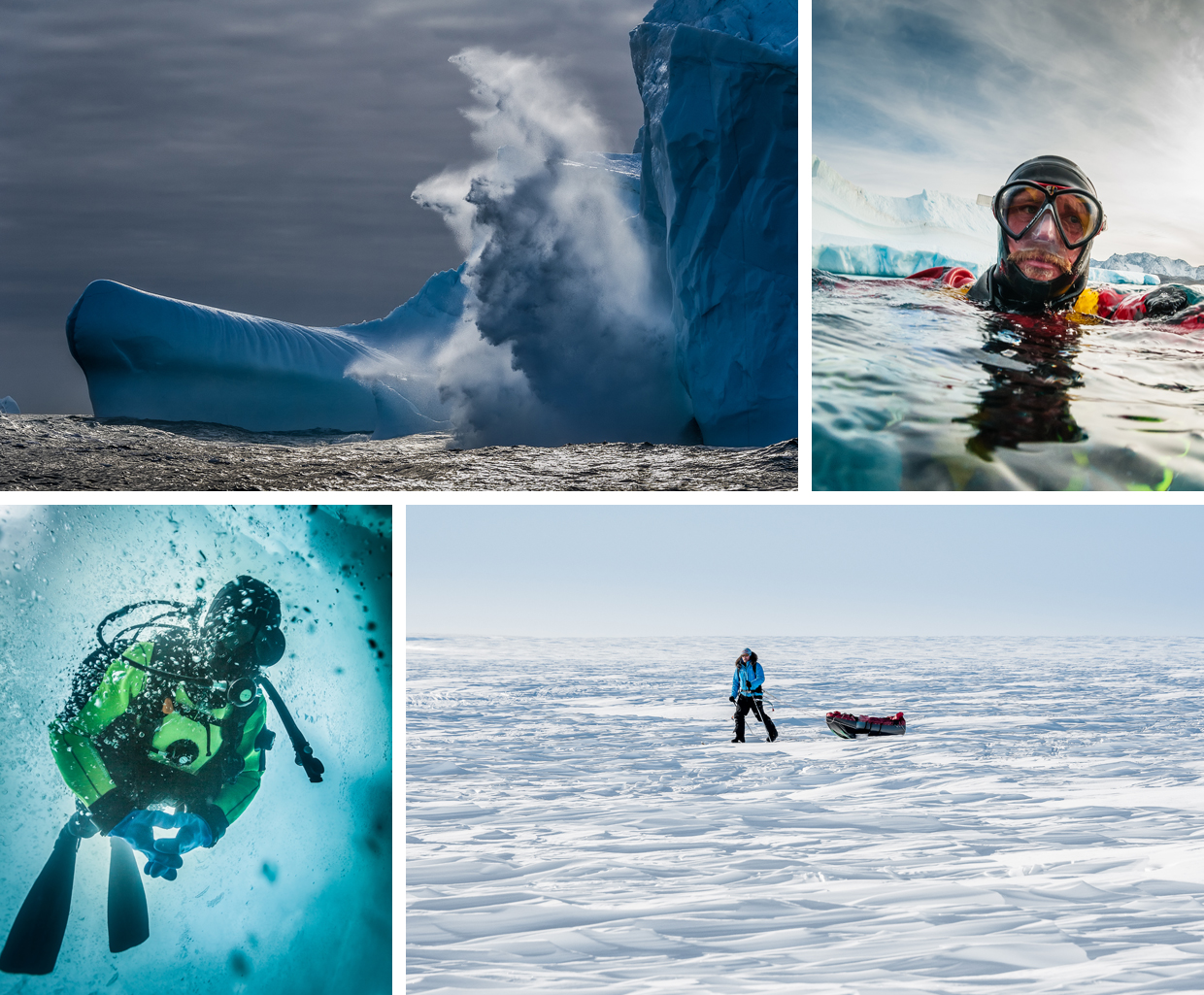 You are tracing the route of Amundsen, what inspiration do you draw from him?
Amundsen took three years to find a Maritime passage. I am certainly going to be thinking a lot of him because these passages, a century later, are still the same today. These explorers who discovered new territories have always inspired me. Being an explorer in 2018 is like a profession. There are plenty of territories to be discovered, but there is a lot of work to be done despite the technological developments.

There are new species to be discovered; most parts of the oceans are still unknown; the north-west passage is only 5% correctly mapped, and if we want to protect the world we need to understand its evolution. To do so, we need scientific data. Data were satellites can not map, and scientists cannot reach. This will be my task and a small contribution on my next expedition. Amundsen and others have certainly inspired me to taste the adventure and be at the service of a noble cause.

What is the key aim for it?
I want to undertake three scientific programmes. Firstly harvesting plankton to study its DNA. There is very little information about plankton data in the Arctic, something which remains a significantly unexplored topic. Our study will help generate models and patterns to better understand the effects of climate change and the impact of human activities on the ocean. In turn, the impact of the environmental conditions or climate change on this ecosystem has major ecological challenges for our daily lives.

Secondly, we’ll be gathering information about climate change. The project titled Calisph’air will use ground measurements of the atmosphere and in particular aerosols (solid and liquid particles suspended in the atmosphere) to compare these measurements with those taken by satellite.

Thirdly, we’ll be studying the reaction of the brain in extreme environments. The vigilance and neuropsychometric tests aim to analyse the performance of the brain when subject to extreme environments. The flicker fusion threshold, for example, aims to analyse the ‘speed’ of brain decoding. Visual signals go very quickly to the brain, almost without major elaboration. Being able to recognise the existence of close visual signals and to discriminate between them makes it possible to evaluate the speed of cerebral reaction and therefore the brain’s alertness to correlate fatigue, stress and extreme conditions. We’ll be doing that with Professor Costantino Balestra, Full Professor of Physiology.

I will also be working on a dedicated film, a commemorative book, a photo exhibition as well as presenting at conferences. The expedition will bring unique moments, moments which may not exist in a few year’s time. We need to do it now before it’s too late so we can share the adventure with the general public. It’s important to share the values of these expeditions and the environmental message. When something is beautiful, we have a stronger desire to preserve it. 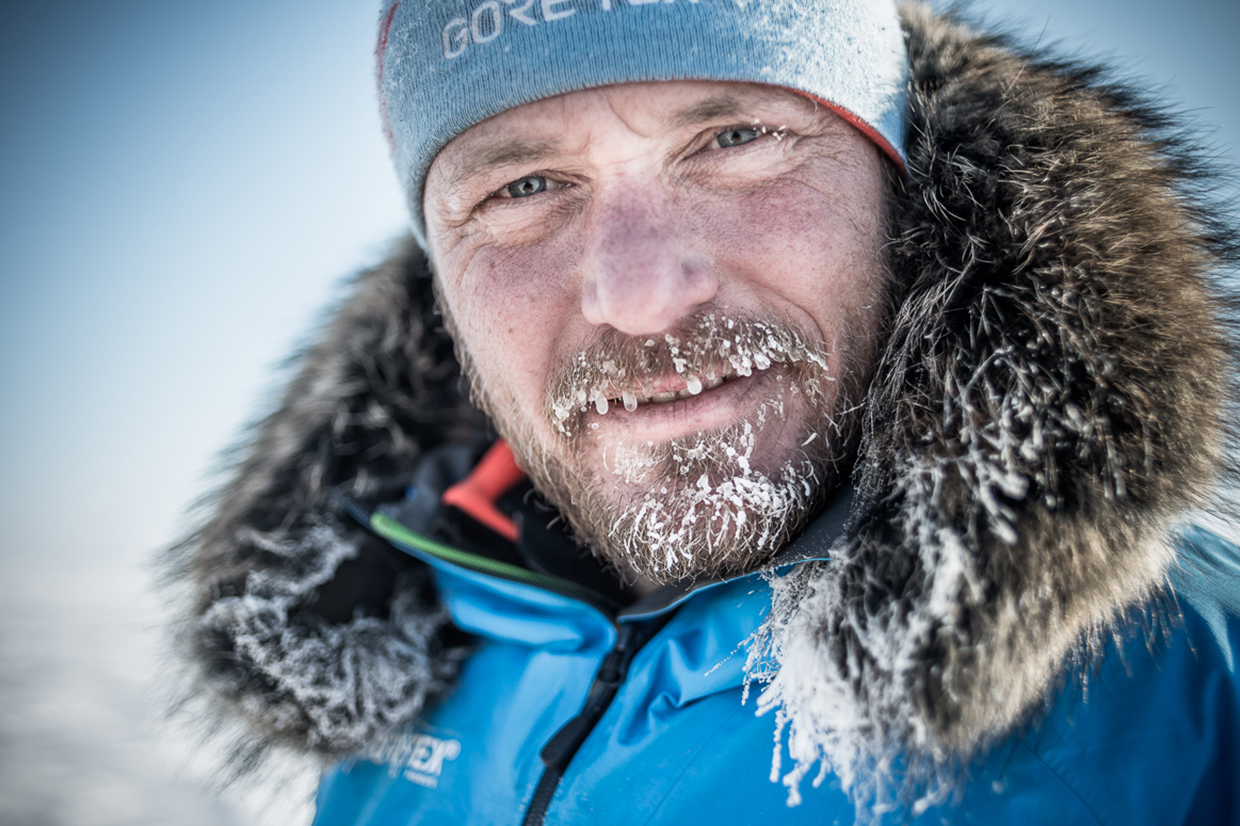 What do you think the biggest challenges will be?
For me, the most difficult part will be to live alone for two to three months in this desert of ice. I have always done expeditions in groups or with partners, but this one alone will be certainly a challenge for me. On the other hand, I am confident that having visualised this adventure so many times in my had before and having prepared for it for two years now it will all contribute to going through it more easily.

What one piece of kit will you be taking with you that will make the difference?
I think my cameras are going to help me during the difficult moments. They will probably allow me to talk to ‘someone’ and give me a way to express my emotions. It will be difficult, but it’s not because it is that I will not do it. I always try to improve and think that anything is possible. 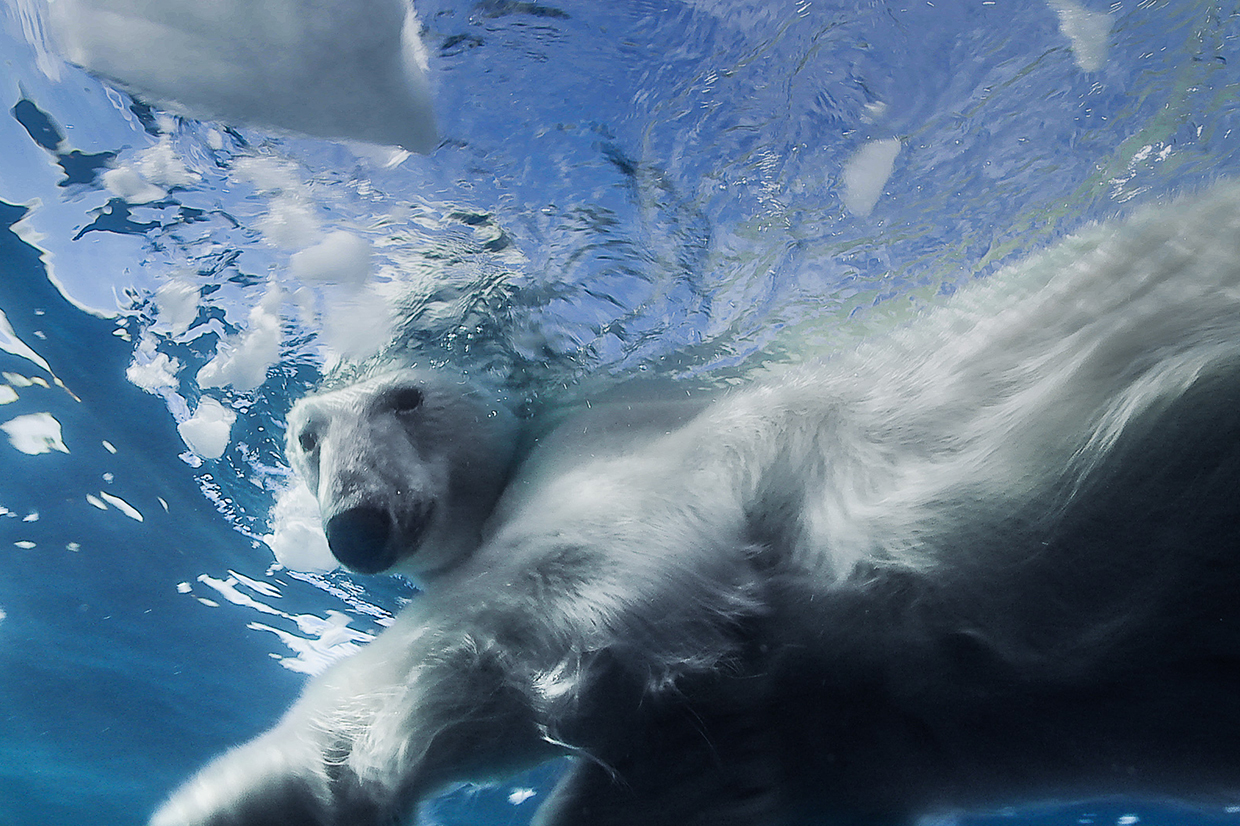