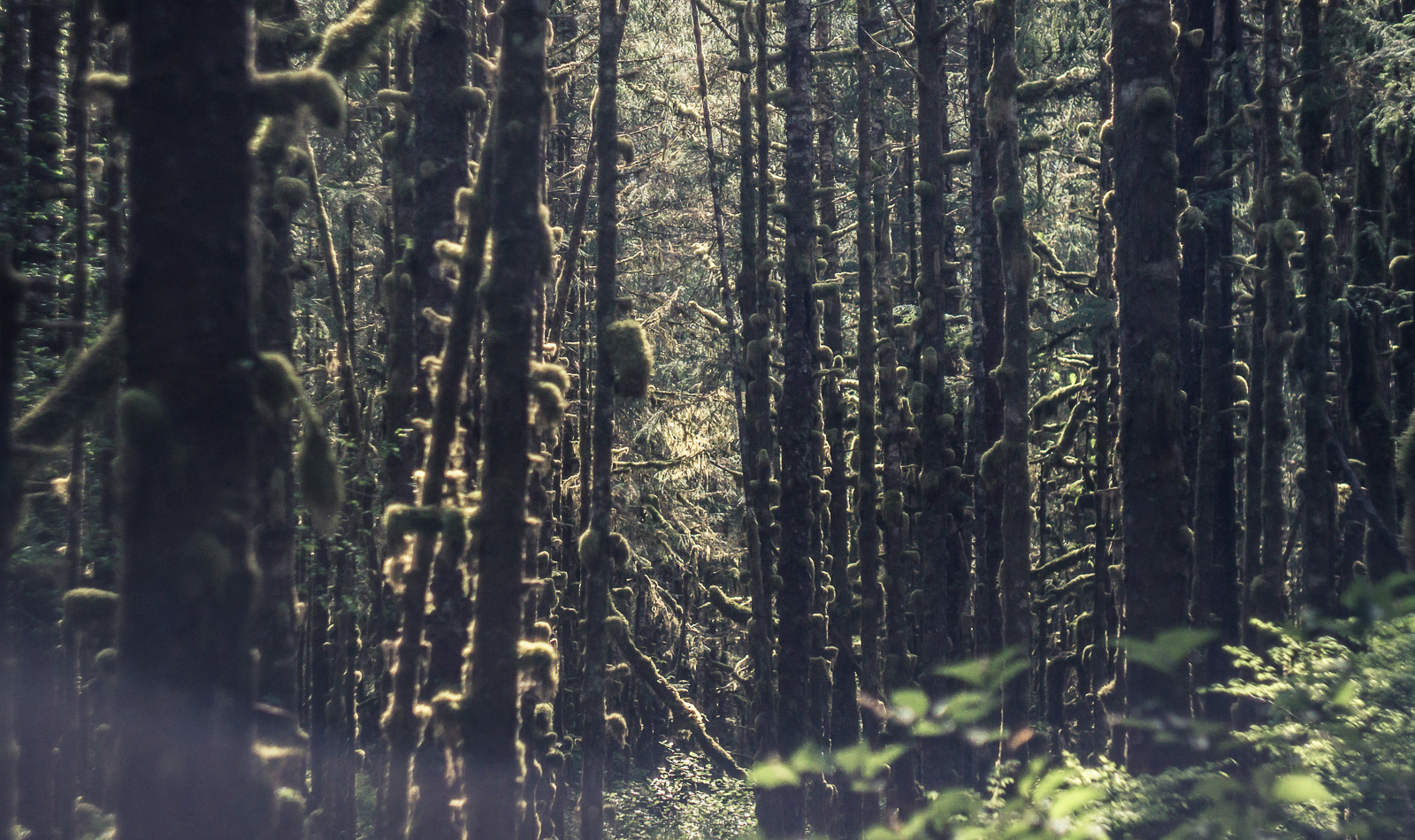 We were the first human contact he’d had in thirty days and I figured hurrying him up, or even communicating with him, might be difficult. We called his name and coaxed him out of the forest, like coaxing a wild animal from his familiar den. We said hello; he didn’t make eye contact, but hid behind his sun-bleached cap, his smeary glasses, his unkempt beard and grubby skin. He wore faded jeans that hung from his waist, and the collar of a pale denim shirt peeped out from beneath a shabby jumper. He walked across the beach in flimsy black Velcro trainers that were torn at the toes.

We offered to carry some of his things but he wouldn’t let us. We followed his path back into the forest and realised that the light blue tent on the beach was just a storage facility. Hidden in the ancient forest there stood a small wooden cabin, a wood-burning stove, a long drop, a whale bone and a Japanese Sign, ‘To the Engine Room’, which hung, crookedly, from the front of his cabin.

Dave had craved an escape from his city job, his stifling office and his tailored suit. He used to work for the Canadian Government, managing the use of natural resources – coal, oil, gas – after studying Geology as a young man. Dave is no stranger to British Columbia’s remote West Coast; he participated in the construction of the well-trodden West Coast Trail on Vancouver Island 40 years ago. He’s in his mid-seventies now and for the past 10 summers he’s lived far from civilisation on the rugged West Coast of Haida Gwaii, a remote island off the North Coast of British Columbia. Its vast emptiness is a haven for beachcombing, treasure hunting, and retrieving rare items only available to those who make the journey.

Year after year Dave arrived at his isolated camp by helicopter or Zodiac, whichever was most affordable at the time. He always brought his scruffy clothes, empty bags for filling with beach treasure, two tents, a chainsaw, other tools, and two satellite phones, his only means of communicating with the outside world or calling for help.

I’d been living on Haida Gwaii when he made the call to be evacuated. He’d expected to spend two months beachcombing peacefully from his beloved cabin, but his trip had to be cut short. He called a local sea veteran, Doug, and asked to be collected as soon as possible. I offered to help. We arrived at Beresford Bay after an exhausting journey on stormy seas.

We called his name and coaxed him out of the forest, like coaxing a wild animal from his familiar den. We said hello; he didn’t make eye contact, but hid behind his sun-bleached cap, his smeary glasses, his unkempt beard and grubby skin. 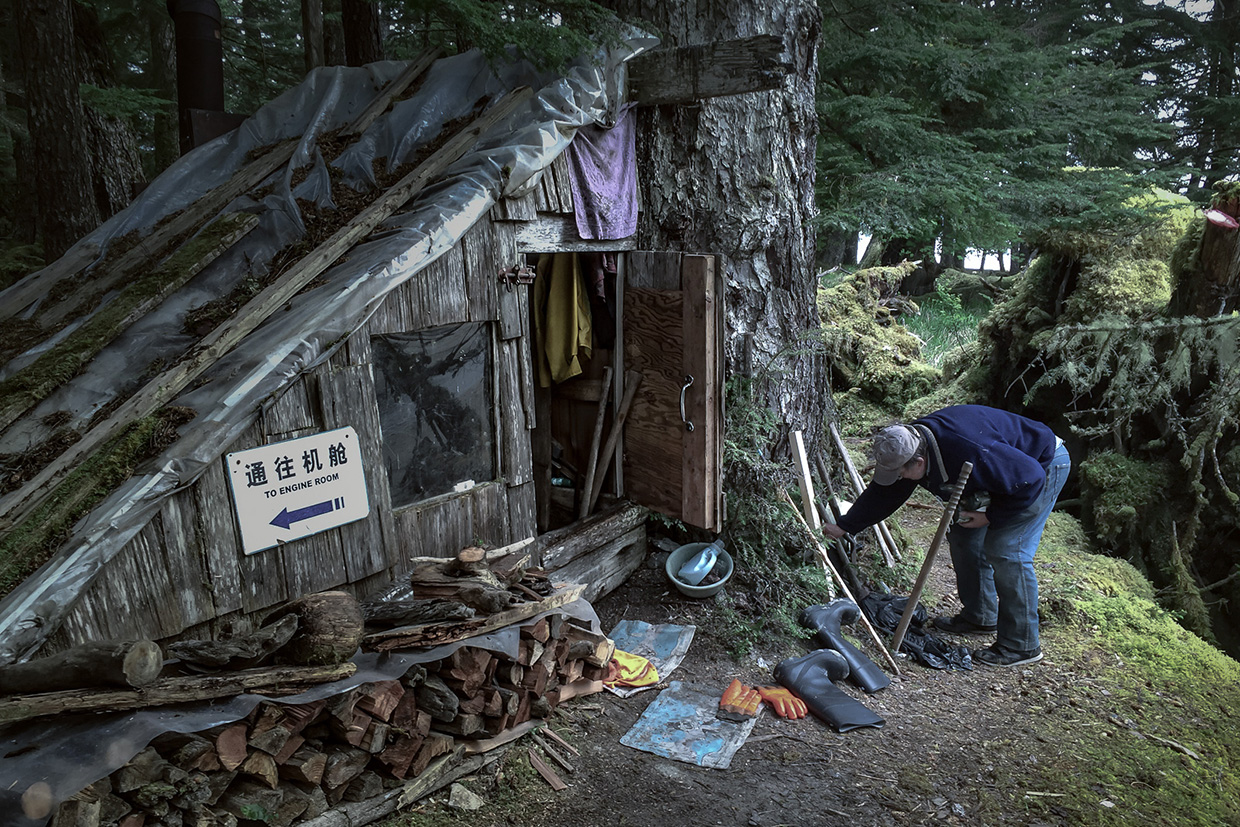 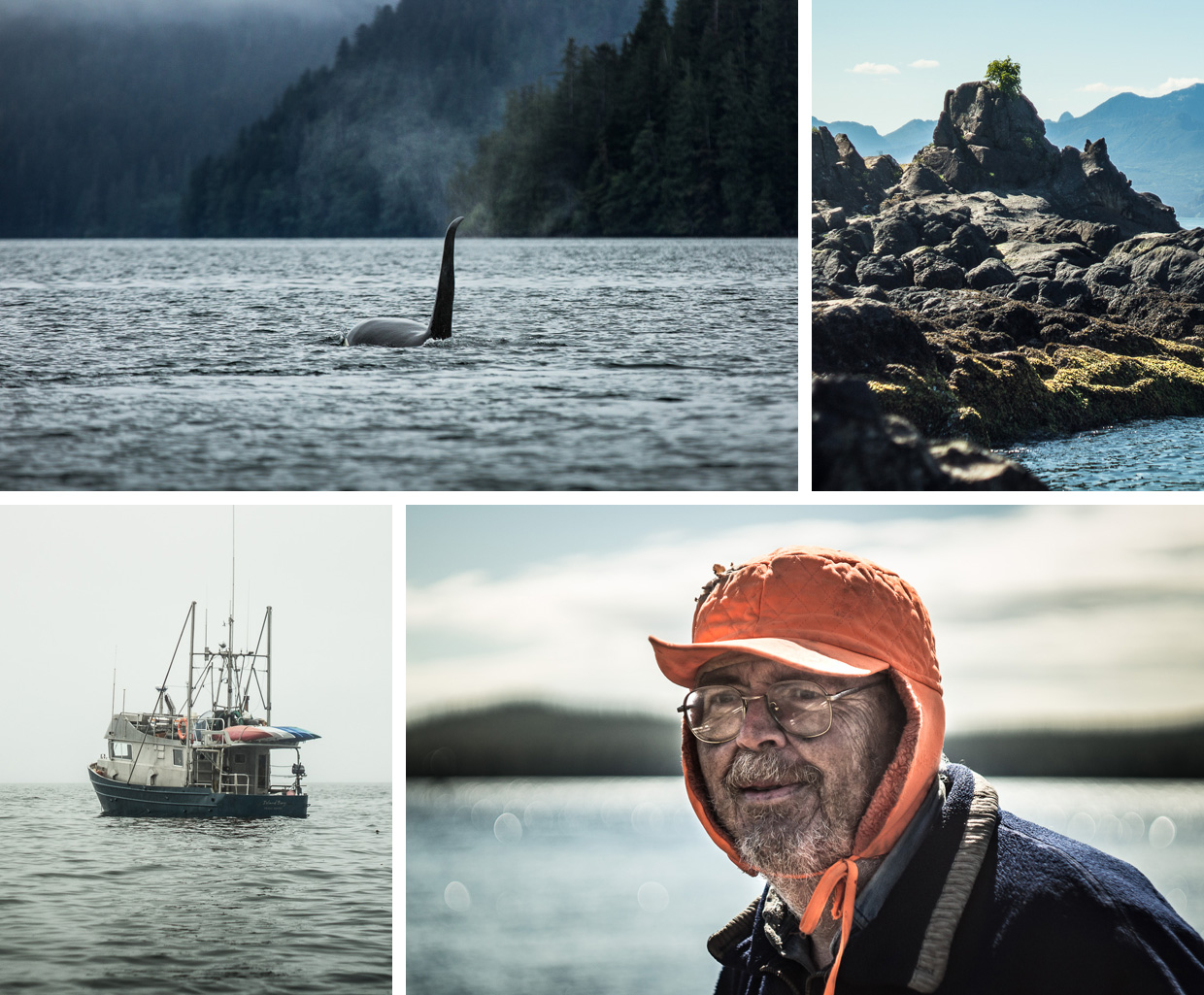 His camp was set amongst rainforests and oceans known for their abundance of natural bounty. The forest teemed with blacktail deer. The surrounding shrubs were laden with delicious salal berries, huckleberries and salmon berries.

From the shore, Dave’s well-trodden path weaved its way through a looming forest of giant cedar. It arrived at an established camp, hidden amongst swathes of lichen and moss which hung from overhanging branches. It felt quiet and still, protected from the westerly gales that swept across the desolate beach. Just below the camp ran a stream that Dave relied upon for drinking, washing and cooking water.

The cabin was once a primitive lean-to shelter assembled from a jumble of fallen branches and washed-up driftwood. It was now substantial – large enough to sleep in. It slanted at one end and was supported by a sturdy Sitka spruce at the other. Inside, Dave strung his rain-soaked clothes to dry, stacked his firewood and stored his food away from prying Haida black bears. Tucked in the corner of the dingy cabin was an impressive wood-burning stove, a luxury Dave had brought in by helicopter a few years ago. The cabin, he claimed, was ‘the most westerly man-made structure on the Pacific Coast’.

Aside from the cabin tucked away in the forest, Dave kept a small sun-bleached tent on the beach. Under its salt-encrusted flysheet lay a stinking mound of damp, sandy backpacks and suitcases. Most were torn or ripped and had been primitively sewn back together. Some had been filled with clothes and tools, but most were stuffed with strange shells, curiously shaped driftwood, tangled ropes, old nets, Japanese glass bottles and fishing floats, and other miscellaneous beach debris.

His camp was set amongst rainforests and oceans known for their abundance of natural bounty. The forest teemed with blacktail deer. The surrounding shrubs were laden with delicious salal berries, huckleberries and salmon berries. Salmon, halibut and lingcod abounded in the ocean. But Dave didn’t hunt, fish or forage – his rations of dehydrated meals, dried fruits, nuts, canned food and granola were brought in by helicopter and carefully portioned out for the length of his stay.

Instead of gathering food, Dave chose to spend his precious time away from people sifting through the untouched beaches which stretched along his rugged coastline. Some days he’d look no further than the beach just beyond his camp. Other times he would embark on solitary multi-day hiking trips up and down the West Coast, searching for washed-up treasure – Japanese glass fishing floats, Japanese sake bottles, whale bones, bald eagle feathers and agate.

From his distant camp on Beresford Bay, nothing but the vastness of the Pacific stood between Dave and the far-off coast of Japan. Items he found washed up had perhaps been adrift for many years and travelled many miles. The Japanese sign that hung from his cabin was likely debris from the 2011 Japanese tsunami. His precious glass fishing floats had perhaps been lost in the circular currents of the Pacific Ocean for 10 years before they landed on the western shores of Haida Gwaii. Historic fragments of lives past and journeys long since made, Dave retrieved these forgotten items and returned them to civilisation. Some he sold, some he kept and some he donated to schools in Canada’s coast-deprived interior.

Dave didn’t seem ready to leave his camp. As we coaxed him, distant and mumbling, from his forest haven out onto the exposed shores, he absently wandered around saying farewell to the place. Perhaps it was for the last time. He moved slowly and was frailer than I expected for a man living in the wilderness. As our boat heaved in the waves, we hauled him aboard amongst the chaos of bags, shells and the whale bone. 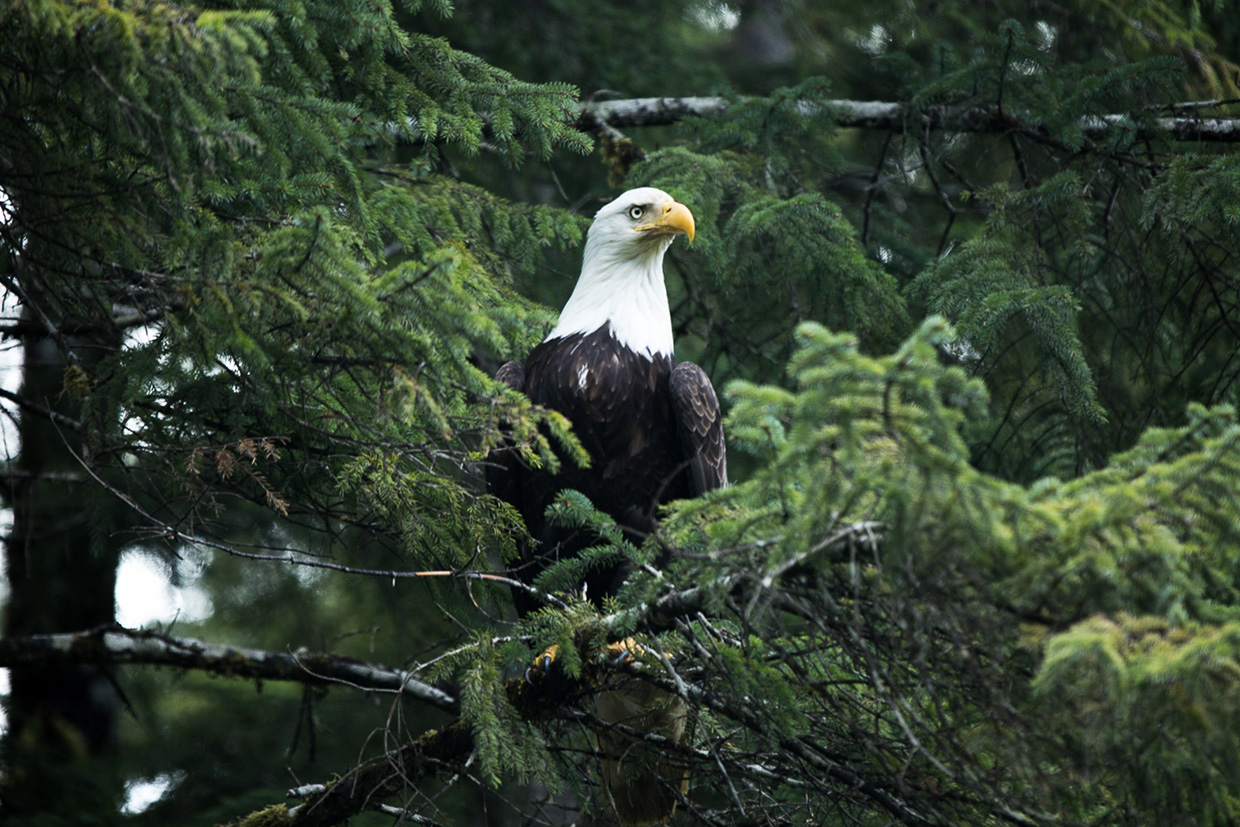 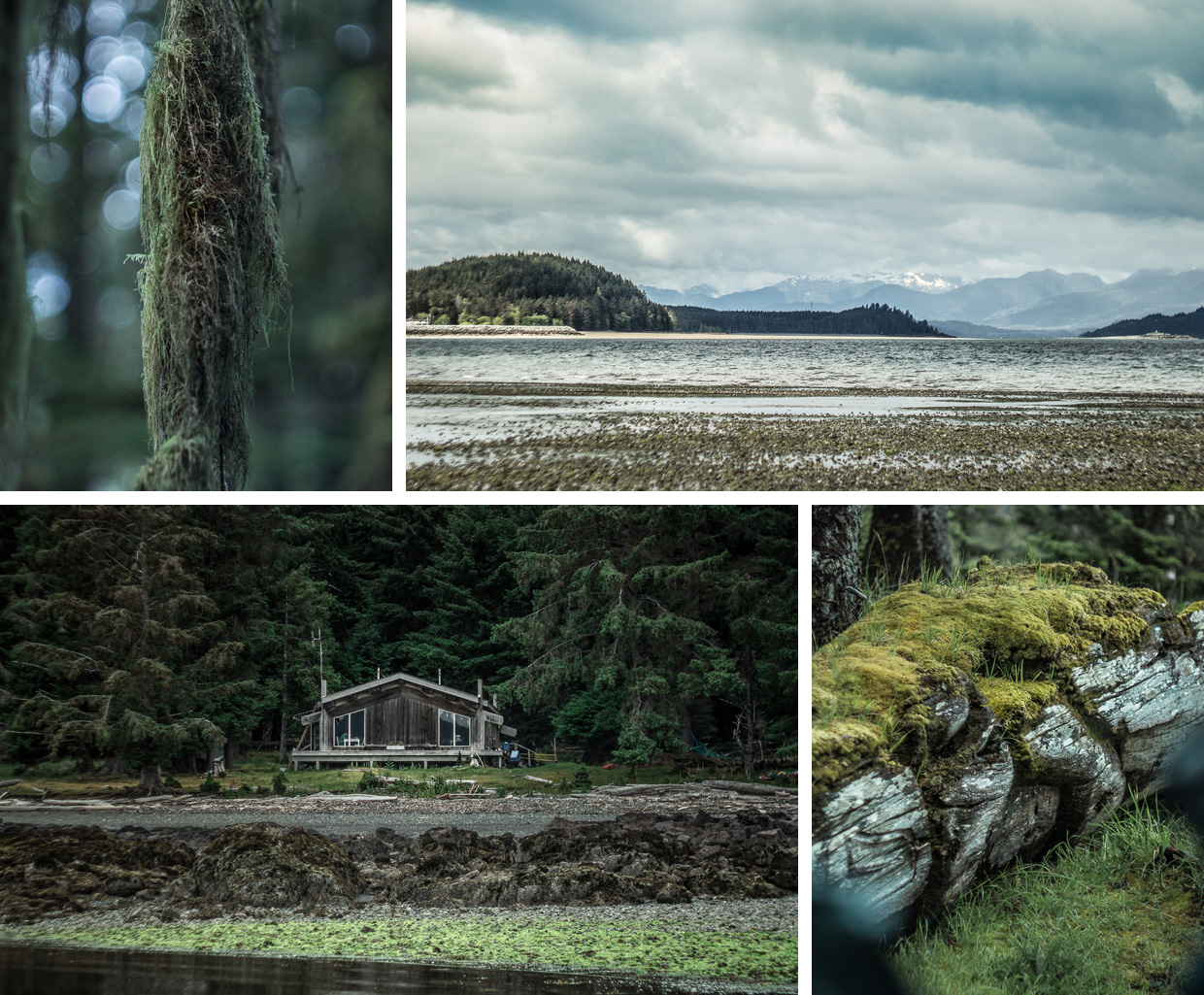 He sat facing the stern of the boat as we left the shore. I sensed his sadness as he watched his beach disappear, but I didn’t interrupt his quiet. I guessed this parting was traumatic for him. He hadn’t seen people in some time and we’d crashed into his world, carrying all his things away from their home before clumsily shoving him in our boat. It felt undignified. But we were in the wilderness; neither the wind nor the tides cared for a dignified or sentimental farewell for Dave.

As we entered calmer water Dave turned around to face the bow of the boat. I asked him why he had made the call to be evacuated. He simply replied, ‘I passed a kidney stone two days ago.’

We arrived at Masset and Dave took his first reluctant steps amongst the pontoons and fishing boats floating in the harbour. He didn’t have any plans for his arrival at civilisation. He had no place to stay and no-one to greet him. He was tired and overwhelmed and clearly yearning for life back at his hut.

Dave wasn’t performing any pioneering research out on the West Coast. He was just an eccentric man in search of peace, and found it beachcombing and treasure hunting from his desolate beach at Beresford Bay, on what he called his ‘anti-social holiday’.

Helen Taylor is a writer and photographer who recently graduated from the University of Bristol with a BA in Classical Studies. She has spent the last year working and travelling on the West Coast of British Columbia, Canada.

In The Wake Of The Celts Wild Cooking Scotland 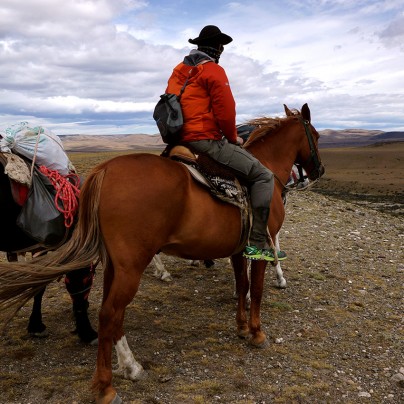 The Last Explorers On The Santa Cruz Leon McCarron