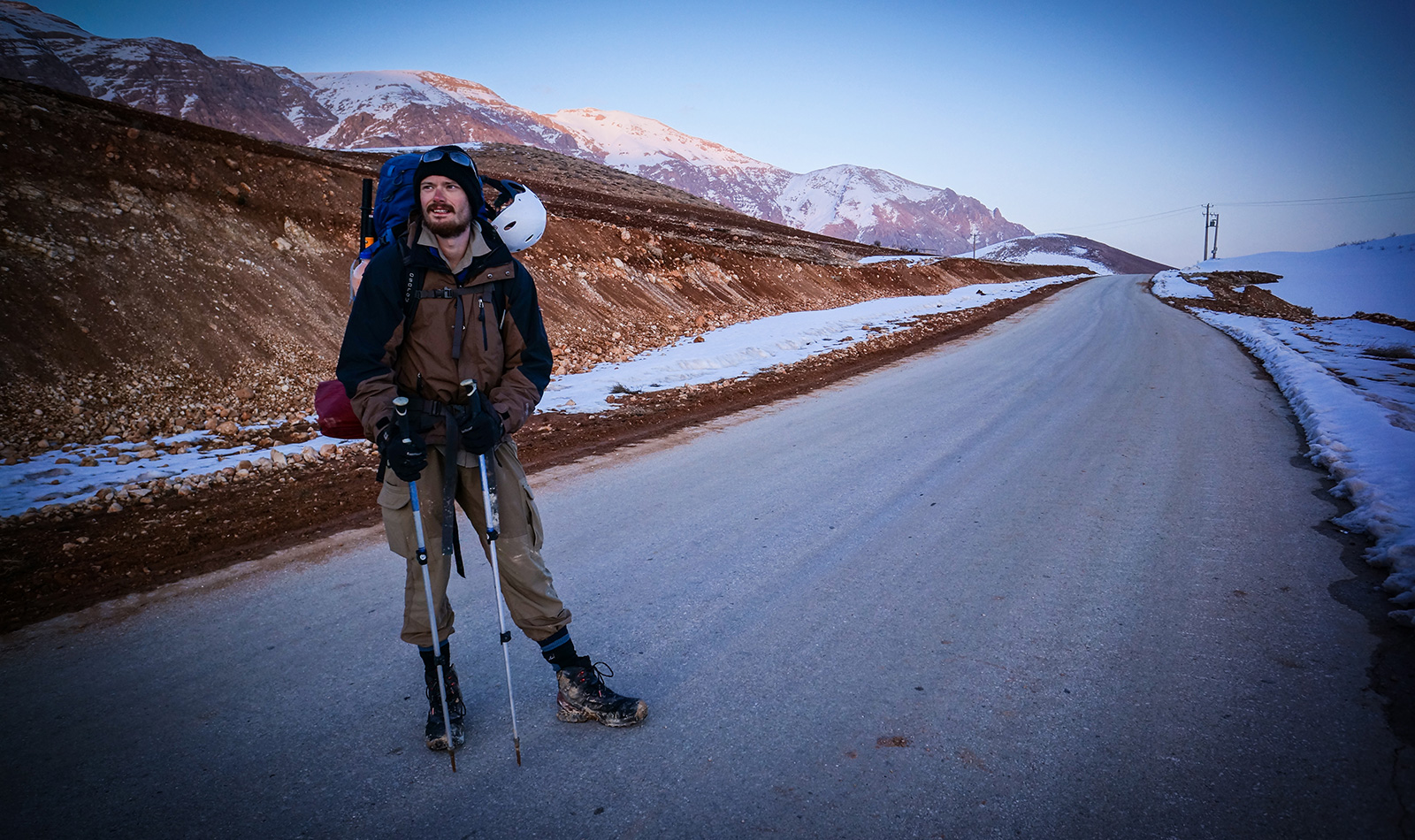 It was a beginner’s mistake, an easy one to make, and in retrospect I can’t believe I almost went the same way myself, having just watched how it happened.

I’d been sitting in a hard-won eddy by the river’s left bank. Leon and I had been hollering over the din of crashing water, trying to scout a sneak-route down the side of the biggest rapid we’d so far encountered on our journey. Volunteering to take the lead, Leon edged back into the flow, aiming to follow a fairly obvious current through a chicane of van-sized boulders near the bank. Successfully negotiating the course would spit him out into the calmer waters we’d spotted a couple of hundred yards downstream, where we’d regroup and resume our paddle.

I glanced up at the towering sides of the gorge, hundreds of metres above us, from where these boulders had come crashing down at some indeterminate time in the geological history of the Zagros mountain range, nowadays located in south-western Iran. As had been my habit since the locals had begun warning us of their presence, I scanned the rockfaces for the malevolent shapes of bears and wolves. I imagined them motionlessly watching us toil from lofty perches above, waiting for us to make a mistake before descending triumphantly to feast on our flesh. But all I could see was a narrow, jagged-edged stripe of bright white sky. So much for the over-active imagination. One thing was for sure, however: there was only one way out of the dark place we were in, and that was to continue paddling until we found an escape.

I glanced back down. There it was: the shiny black hull of the packraft. Bobbing up and down against a wall of rock. Flipped. Leon was nowhere to be seen.

I dug the blade of my paddle into the water and heaved the bow of the packraft towards the edge of its safe haven, sitting up in my seat and hunting frantically for a sign of my missing expedition partner. Adrenaline coursed; a dozen hypothetical rescue scenarios (and a dozen worse ones) blitzed through my brain. My throw-rope hung from the side of the huge backpack that counterbalanced my boat. Though my mind was working at a hundred thoughts per second, I dimly acknowledged that we’d brought it along without ever truly expecting to need it. It’d be no use now, of course, but then we simply hadn’t considered this particular section suitably hazardous. Lesson learned.

I scanned the rockfaces for the malevolent shapes of bears and wolves. I imagined them motionlessly watching us toil from lofty perches above, waiting for us to make a mistake before descending triumphantly to feast on our flesh. But all I could see was a narrow, jagged-edged stripe of bright white sky. So much for the over-active imagination. 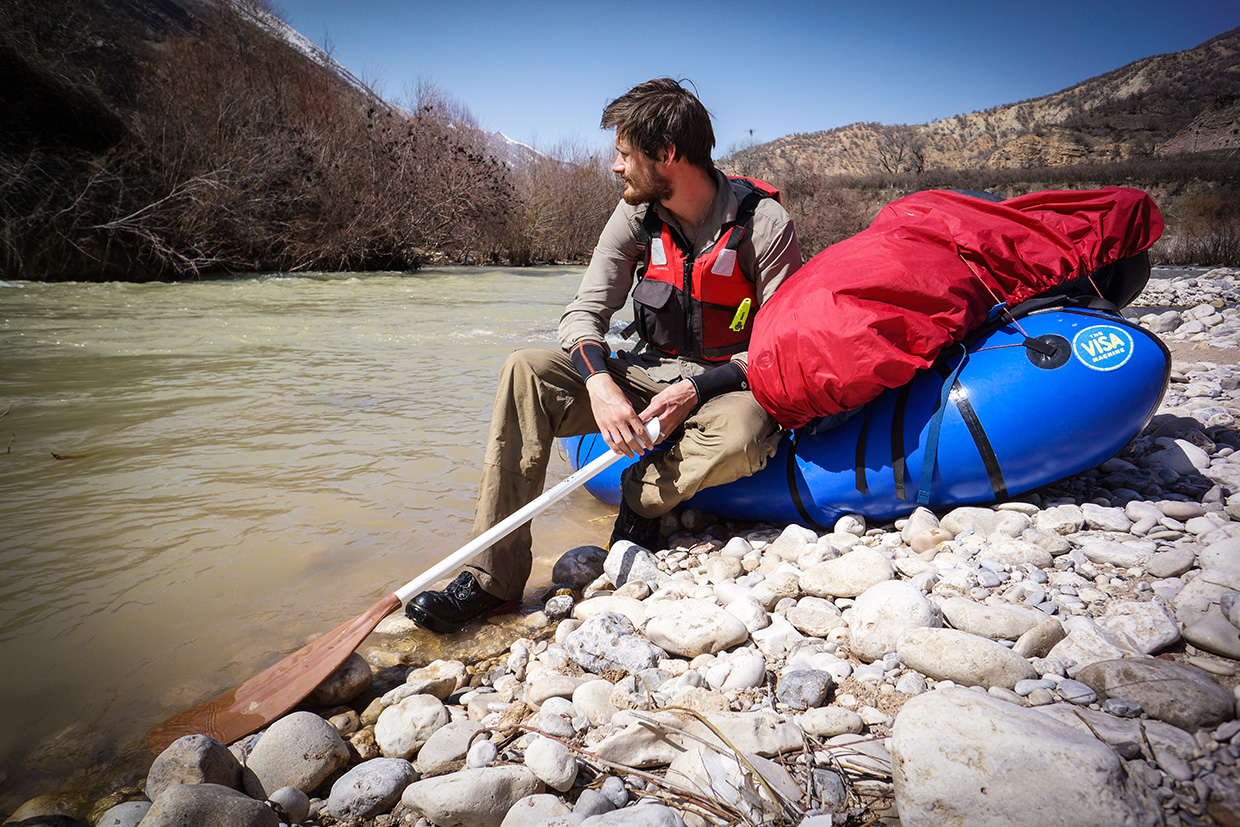 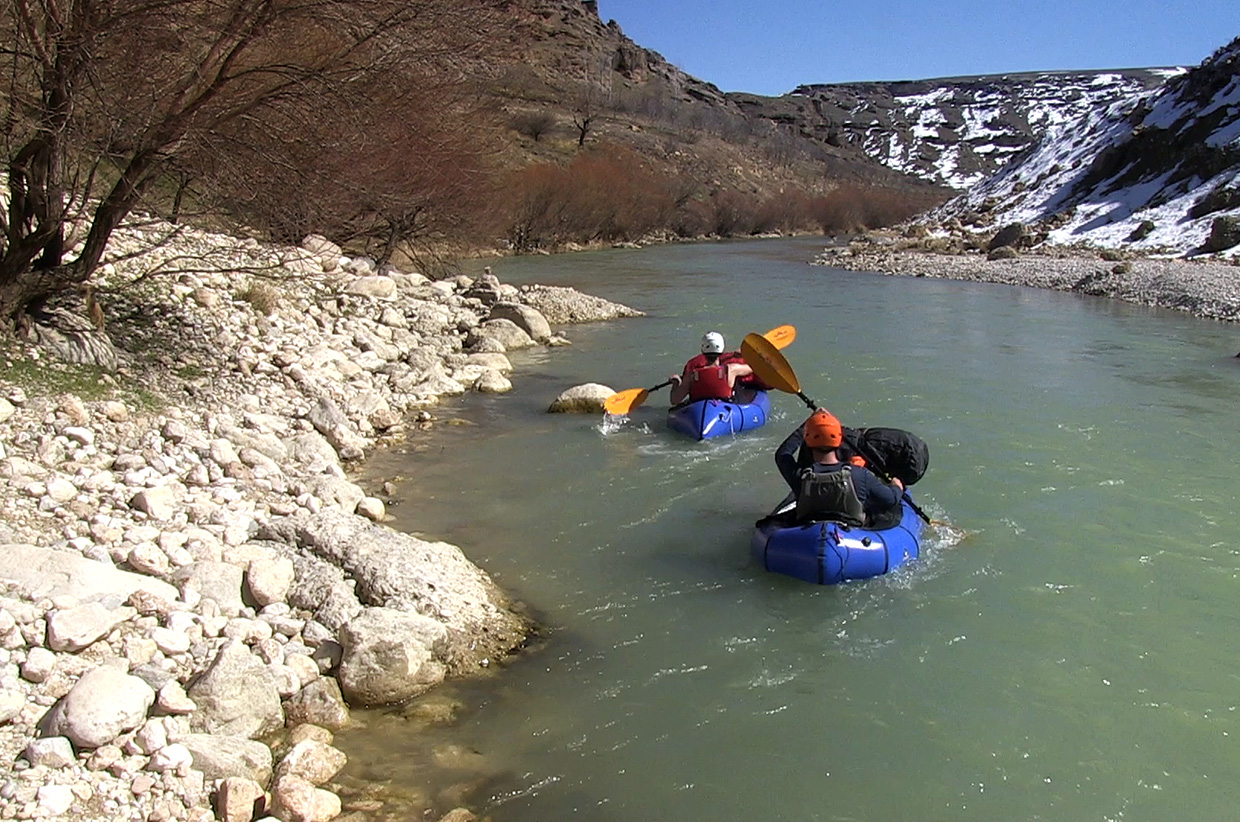 Then the packraft heaved upwards and Leon reappeared, struggling free from his vessel’s spraydeck and resurfacing with a gasp, doggy-paddling to keep his head up. It had been no smooth chicane of water at all; instead the swift-flowing current piled head-on into the solid wall of rock where Leon now swam, and the result was a boiling mess of turbulence, flipping his boat in an instant as he’d drifted up against the rock, swung side-on and made his gunwale the target of all the river’s energy. An experienced whitewater paddler would have seen it coming. I wouldn’t. If I’d gone first, I thought, that’d be me in there right now. And now, sitting just yards upstream from my struggling friend, I had no idea how to help him.

But now his buoyancy aid gave him room to think and manoeuvre. He was stoic, rarely losing his cool even when out of his depth, and that’s why I’d invited him to my adopted home country to follow its longest river, the Karun. And now he was clinging to the boulder’s sides, finding hand-holds and dragging himself out of purgatory and back into the current. And now he was swimming strong for the eddy on the far side of the boulder, and now he was hauling himself out of the water onto a tiny island of rock – while his packraft floated past, midstream, still upside down, while the bright orange blades of an expensive fibreglass paddle could be seen, submerged, tagging along behind. The paddle!

In a moment of curious detachment familiar only to the habitual adventure filmmaker I reached for the ‘on’ button of the GoPro attached to my helmet, mentally preparing to give chase, for my gut instinct told me that Leon could look after himself from here on but that retrieving the boat and paddle would be up to me. I paddled out, aiming for an alternative line through the chicane. Immediately I was pinned against the same damned boulder, the full force of the water pushing and pushing and pushing down on the side of the boat! I was about to go under, precisely the way Leon had gone!

Cursing my stupidity, I briefly remembered our single weekend of river safety instruction in Wales under the command of canoeing legend Ray Goodwin. January, Llangollen: a classic training ground. The water had been bitter. Leon knew this better than I did; he’d capsized there too after misjudging a small drop. The smooth edge had been difficult to see from river level; we’d been taught that negotiating rapids safely was done by mapping the flows and features in advance of actually getting stuck in with a paddle and a boat. Another easy mistake to make. And we knew that small mistakes could have grave consequences when running an unmapped, unknown river for which not a single previous paddler’s report had been available. Not for the first time, I wondered whether it was such a good idea for two utterly inexperienced paddlers to be tackling the upper reaches of a wild Iranian river. 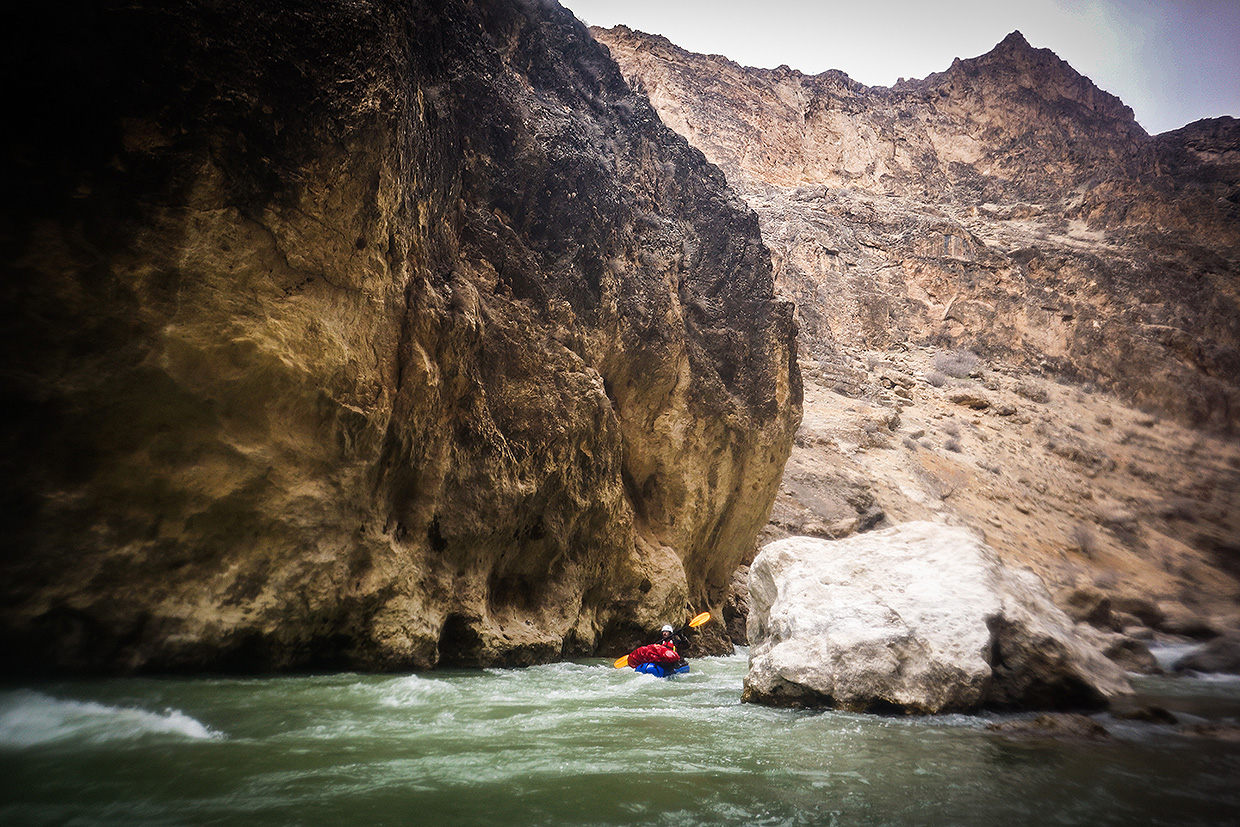 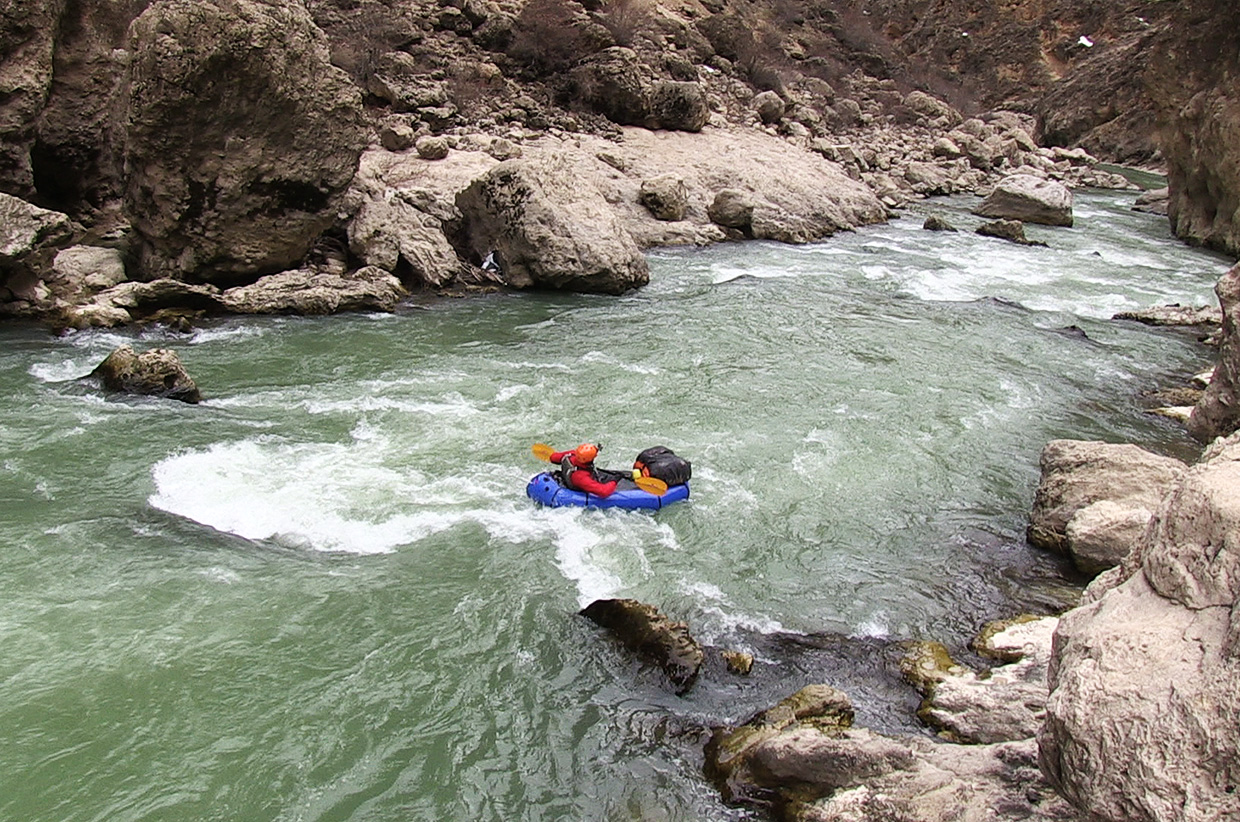 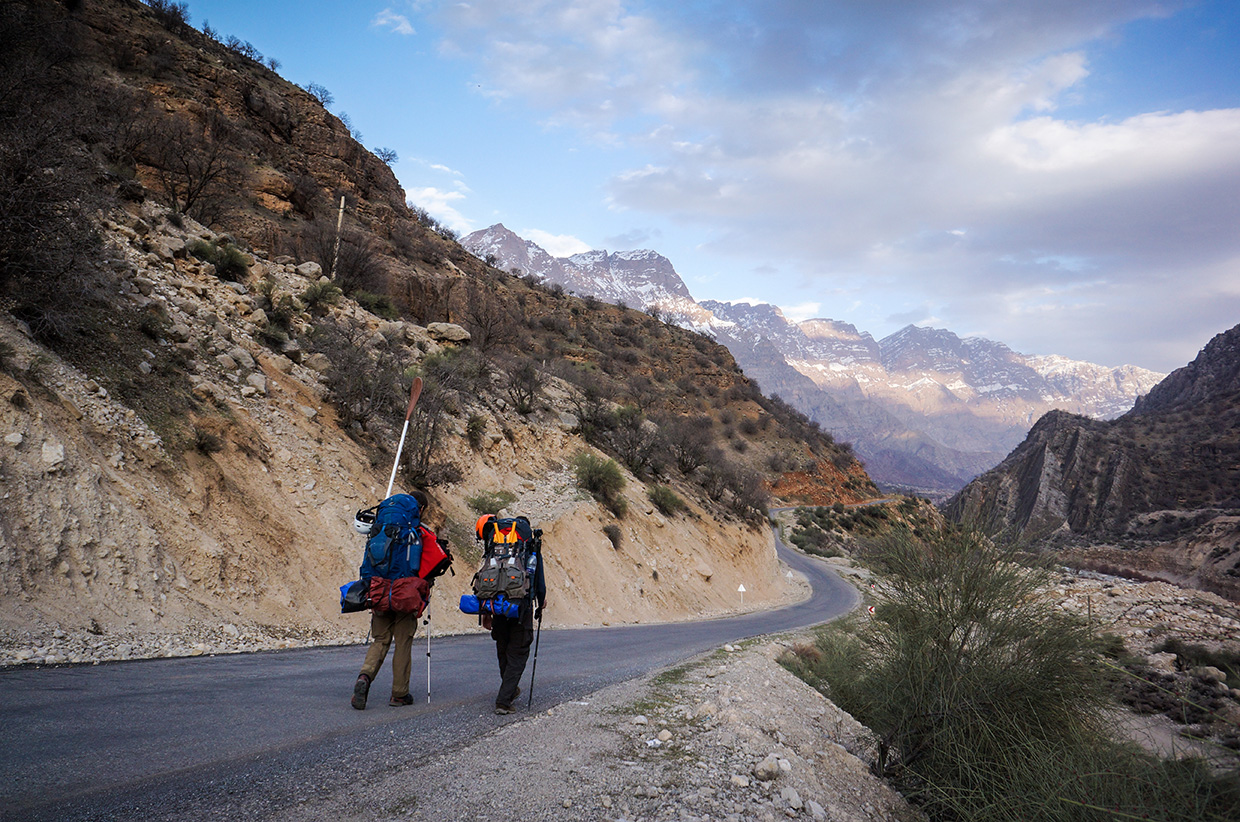 No time to think now. I yanked my bodyweight towards the obstacle, urging my hips to tilt the boat beneath me, forcing the upstream side up and out of the current and urging the water to travel below it so I’d skid atop the churning fury instead of being swamped. Bears and wolves notwithstanding, I was keenly aware that a double capsize would likely mean the loss of our combined worldly possessions at the bottom of an inaccessible gorge in a nation with no British Embassy – and no connection to the international banking networks to replace the entire six-week expedition’s funds that we carried with us. Perhaps it was because of this that I somehow managed to claw my way desperately along the rock, avoid the capsize – and paddle free, out into the river, the running of whose raging rapids now seemed infinitely preferable to being pinned under a boulder.

The stray packraft floated listlessly downstream at the river’s mercy, spinning slowly, bouncing off obstacles, growing ever more distant. I gave chase. I dug in and shot the rapids midstream, bouncing over the standing waves below as if skimming a stone. It was fun. I felt guilty. This was supposed to be an emergency. It wasn’t supposed to be fun!

Or wasn’t it? Was it not this – the invigorating presence of real danger so noticeably absent from a daily life in which our fear of the unknown seems to have been amplified, not ameliorated, by an insitutional quest to stamp out risk entirely – that had brought us here in the first place? Was this not why we’d chosen to wilfully endanger our lives on a dangerous mission that would serve no purpose other than to remind us how it felt to be alive?

Leon’s errant raft fetched up between two rocks in a whirlpool, where I finally caught up with it as it spun stupidly on the spot. I hung back on the pool’s fringes, now afraid of the chaotic hydraulics below. As was always the case on these adventures, I was more afraid of the unknowns I knew existed than of those I didn’t.

Then a blurred patch of orange beneath the surface identified itself as the lost paddle. It sidled past the upturned boat, seemingly ignoring the whirlpool, and then gently – almost deliberately – passing lengthways through an impossibly narrow gap between two submerged rocks, and into darkness, as if a coin entering a slot machine. It was the last we would ever see of that expensive fibreglass paddle, which remains lodged in that cruel underwater trap as I write these words today.

The packraft broke free and floated off once more. More van-sized boulders, more rapids. Leon stood perplexed upon a rock on the far side of the river, watching. Neither of us had packed a spare paddle. Even as I prepared to chase down Leon’s boat for a second time, I realised the impossibility of continuing our journey without the paddle. There was only one thing to left do: get resourceful, and fast.

Lucky for us that we were in Iran. Because in Iran, we’d learned, anything is possible.

Adventure filmmakers Tom Allen and Leon McCarron travelled to Iran to explore the culture and geography of a misunderstood nation by following its longest river. The resulting documentary will be released later this year.

“Adventure isn’t just about adrenaline, heroics and stunning landscapes in far-flung lands. In truth, adventurous journeys have the ability to dig much deeper, unearthing untold stories about the world we all share.” – Tom Allen

UPDATE – Tom Allen and Leon McCarron have recently launched a campaign to produce a feature length film from this journey (and one other which follows the last free flowing glacial river in Patagonia). You can support the campaign by clicking here. As a teaser, here is the short version of the film.

If you enjoyed this film then please consider supporting Tom and Leon in creating these films that capture and present a true, independent spirit of adventure. View the Kickstarter Campaign here.

The Makeshift Mountaineer In Search of the Arctic Circle 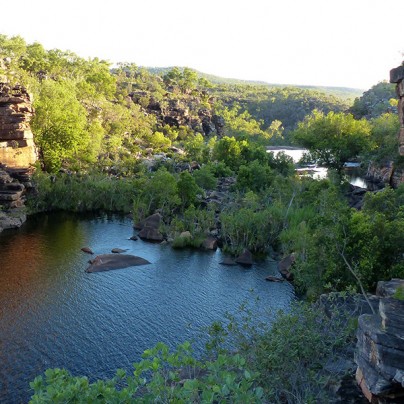