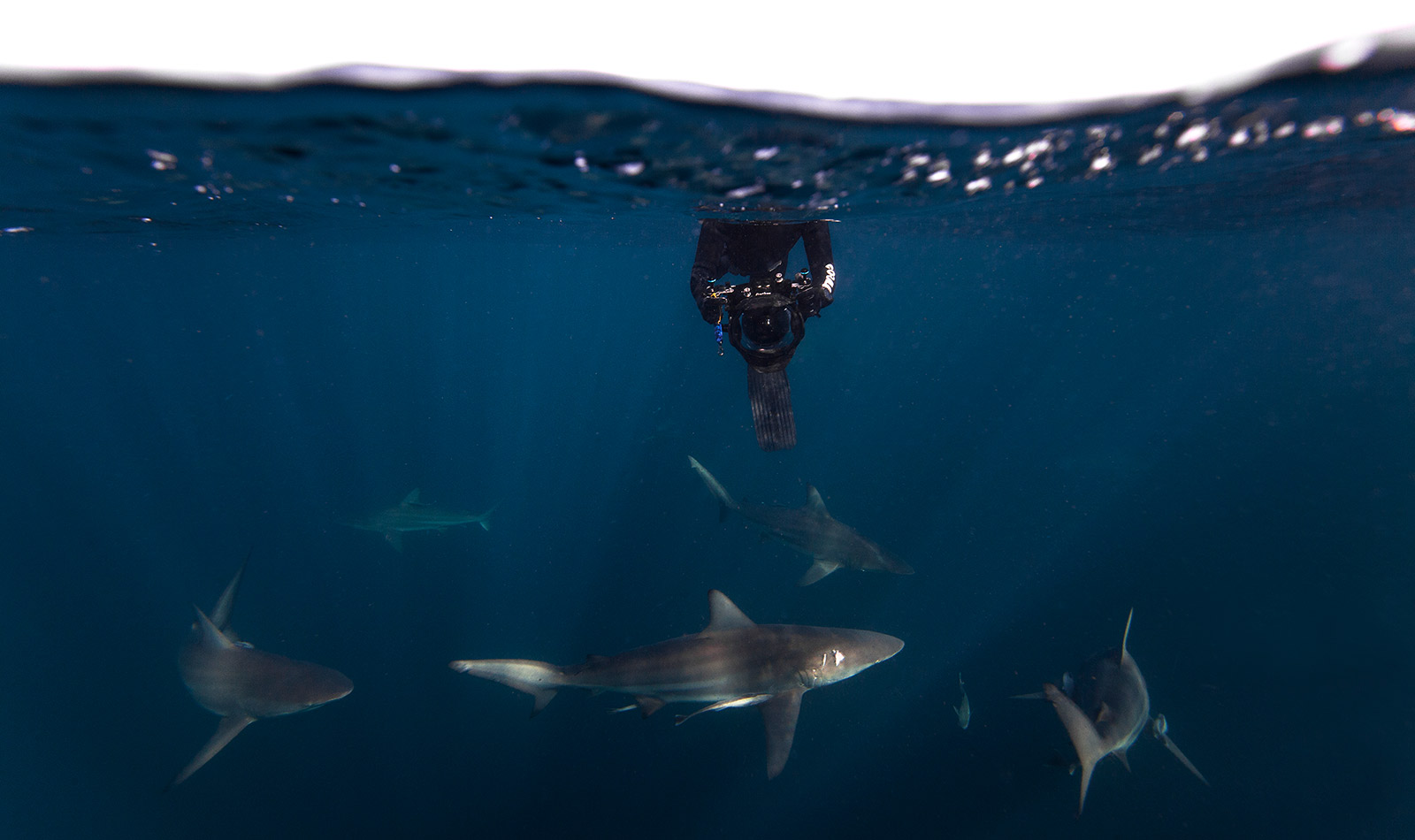 In the Midst of Mozambique’s Killers

‘Breathing underwater isn’t natural,’ people often say when I tell them I’m a scuba diver, who photographs and writes about marine animals for a living. Diving’s not everyone’s cup of tea. After all, humans aren’t built to be below the sea. If we were, we’d have fins and gills, and wouldn’t have to wear plastic feet and tanks.

The sea is an alien environment full of knowns, unknowns, and not-sure-I-want-to-knows. There are gelatinous objects that sting, schools of toothy predators, mammals larger than buses and giant ‘flying birds’. Along with crazy-looking creatures, the ocean is unpredictable, murky, and makes people seasick. No wonder it’s hard to understand the appeal. Yet the marine world, although unfamiliar and occasionally frightening, can also be thrilling.

Over the past few years I’ve been lucky enough to travel the world, documenting its best scuba diving destinations. I’ve dived with manta rays in Madagascar, cow sharks off Cape Town, and dolphins, humpback whales and their calves in Zanzibar. But when I’m asked about my most memorable underwater experience, there is one moment that stands head and shoulders above any others.

I was in Tofo, a small town in the Inhambane province in southeastern Mozambique, making a documentary about shark finning, the practice of cutting off shark fins for food or medicine, then dumping the sharks’ bodies back into the sea. This former fishing village is a convenient two-hour flight from Johannesburg, South Africa, and is one of Mozambique’s most popular tourist destinations. Everything here is hot: the weather, the people, the chilli-laced food and, most of all, the diving, which is lip-smackingly spicy.

Mozambique has one of the world’s largest year-round populations of whale sharks and manta rays, and is home to dolphins, humpback whales, devil rays, large schools of game fish and a remarkable array of macro life. The diving here can be hardcore, with rough seas and varying visibility but, when the conditions are good, there’s nowhere else like it.

The beach from where used to launch our boat was nothing remarkable. The houses on its dunes were concrete boxes, rather than the lavish stilted bungalows you see in tourism brochures, and its shores, instead of being caressed by velvety waters, were lashed nightly by hostile seas. It looked far from idyllic. But below the surface, it was a different story: this is one of the most spectacular diving destinations on Earth.

The sea is an alien environment full of knowns, unknowns, and not-sure-I-want-to-knows. There are gelatinous objects that sting, schools of toothy predators, mammals larger than buses and giant ‘flying birds’. 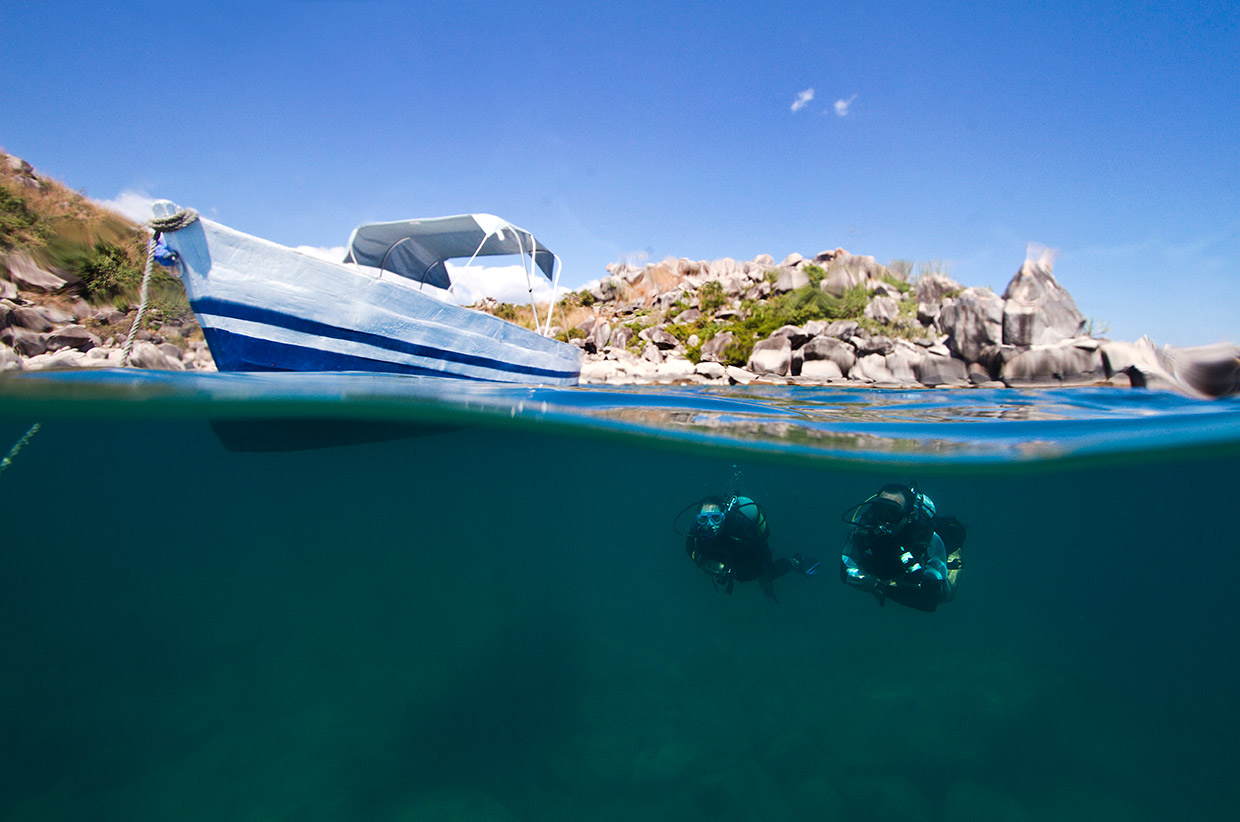 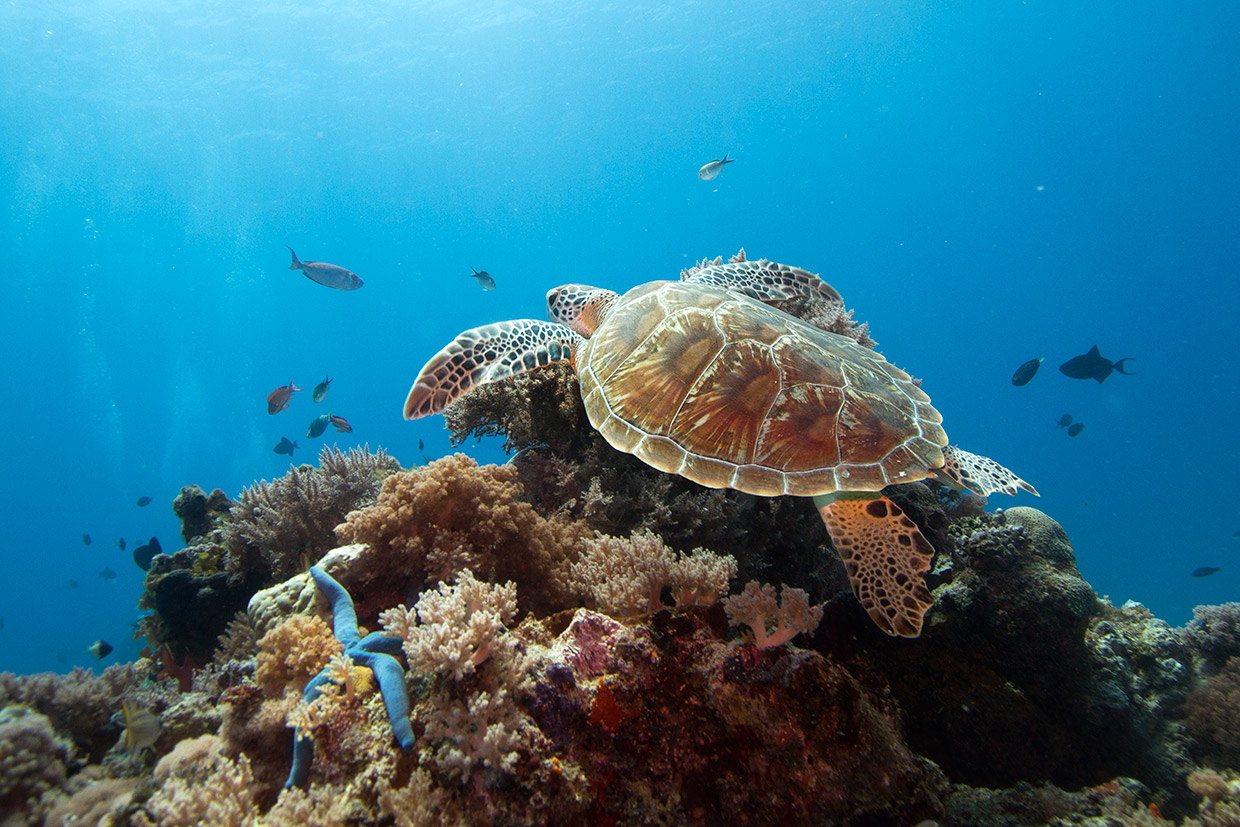 Adrenaline does funny things to you. The desire to get in the water with the killer whale feeding frenzy was overwhelming. I knew it was unlikely I’d get an opportunity like this again.

It was an uncomfortably sticky day. The scene from the beach was unusual: the sea was unnervingly flat … there was barely a ripple. We launched the boat effortlessly and it caressed through puny waves. Within minutes, we were surrounded by a pod of dolphins who were unusually playful. There were devil rays everywhere, tossing themselves out of the water like alien pancakes. The sea was in a mischievous mood and was teeming with life. Everyone on our boat ‘ooed’ with happiness. Not a bad place this Tofo, I thought.

Then we saw a commotion in the sea. A huge flock of birds circled overhead, looking curious and apparently waiting for something. And fins – there were fins everywhere. Dolphins? Too big, too frenetic. Whale sharks? Too pointy, too black. As we got closer, we realised we were encroaching on a pod of around 10 killer whales – orcas – which had clearly just caught something large. Chunks of flesh floated in the sea as the orcas feasted on what looked like a baby humpback whale.

I’d always thought that killer whales would be the one marine animal I’d think twice about swimming with. They’re carnivorous, smart, fast, and they hunt in packs. Although never known to kill humans in the wild – perhaps because most people get straight out of the water as soon as they see them – orcas have killed people in captivity, as shown in the documentary Blackfish. Orcas regularly hunt large mammals such as other whales and seals and, as we know, a snorkelling human looks a lot like a delicious seal, only a lot less agile.

I never actually imagined I’d have an option to swim with killer whales. They are rarely seen in Mozambique – once every couple of years at most – and they usually disappear as quickly as they arrive. As far as I knew, no one had ever been in the water with them locally. So would I snorkel with them in a feeding frenzy? Not on your nelly.

But adrenaline does funny things to you. The desire to get in the water was overwhelming. I knew it was unlikely I’d get an opportunity like this again. I hurriedly put on my snorkelling equipment as if I was possessed, and prepared to get into the water with Dave Levac, an instructor from local dive centre Peri Peri Divers, and Helen Mitchell, a researcher from Marine Megafauna Foundation. 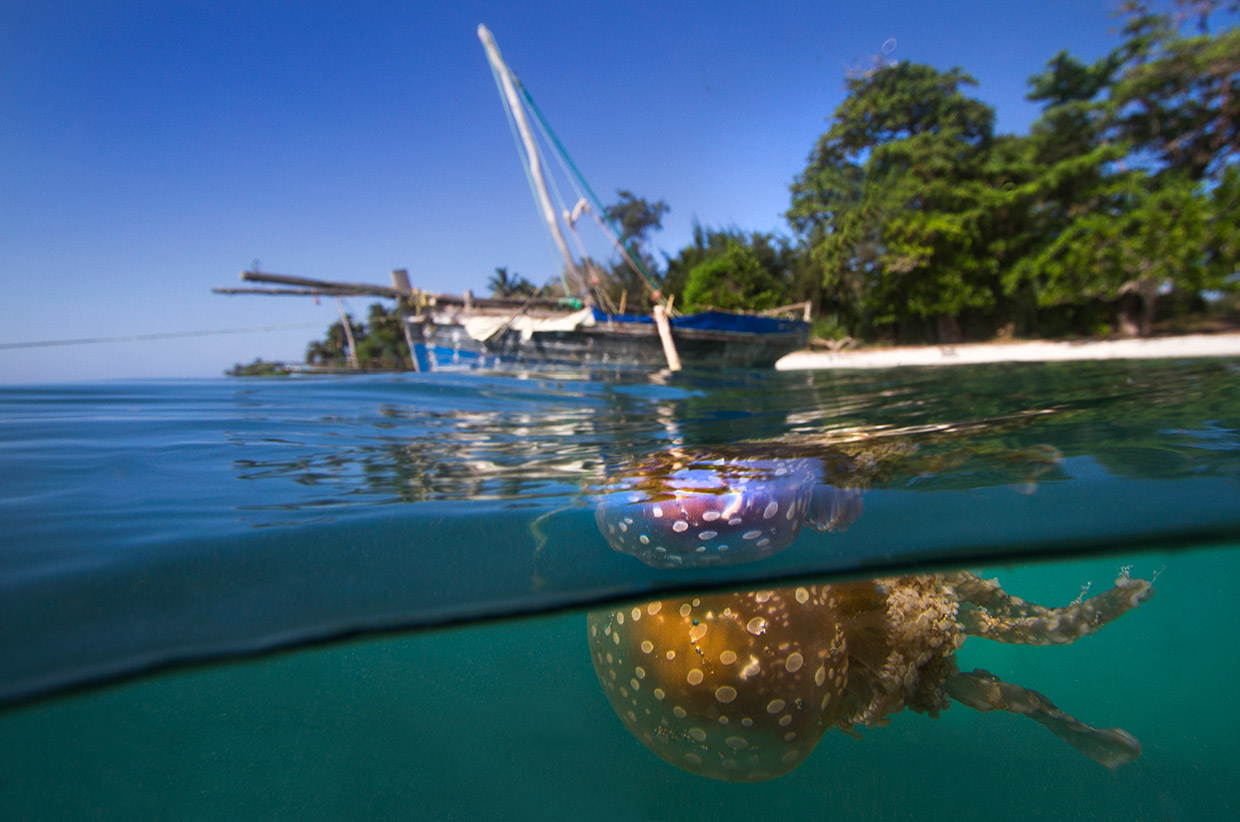 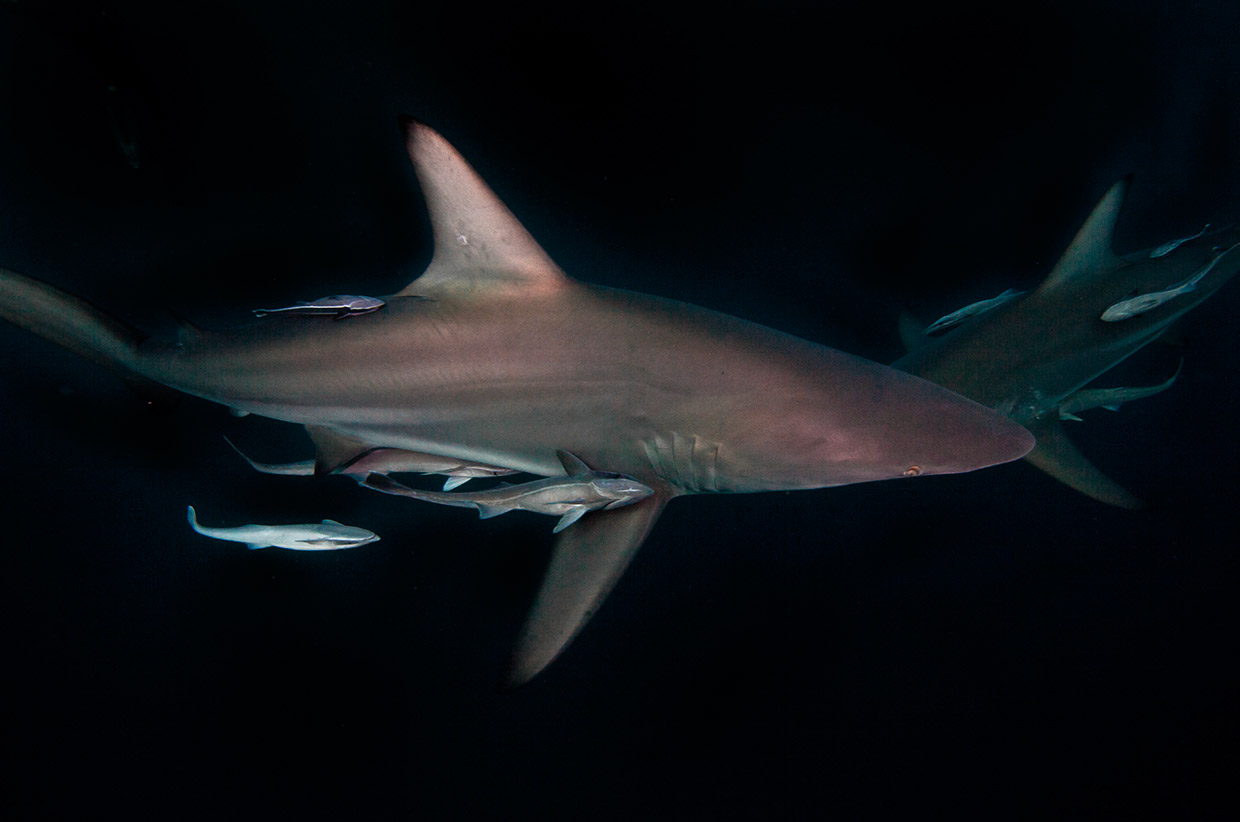 We slipped quietly into the water and snorkelled gingerly towards the stinky buffet; the ocean was thick with offal and flesh. We could make out large black and white objects all around us, as fins disappeared beneath the surface. And then came shouts from the boat: ‘Sharks, to your left! More, right! Lots of them!’

We were being hounded by bull sharks who were joining the feast. They were in hunting mode, with their fins tucked into their sides, and they darted around us aggressively (bull sharks have the highest levels of testosterone of any living animal). As they rushed towards us from the deep, we had to push our cameras at their snouts to keep them at bay, and kicked them away with our fins. The killer whales continued to gorge themselves on the calf, oblivious to the fact that we were fending off sharks right beside them; they weren’t interested in us.

When we’d seen enough, we retreated hastily back onto the boat, elated, exhausted, and with a great story to tell the grandchildren.

We went diving later in the day, but the dives were a heady blur. I remember seeing a breaching giant manta ray, a whale shark and more devil rays. As we surfaced from our final dive, we saw the tail fin of a humpback whale slap the water, just a stone’s throw away from us. Was this the heartbroken mother of the calf that had been killed, off to continue her migration without the baby she had nurtured in her belly and travelled so far with? It’s an unforgiving place, the sea. Yet it produces moments that will stay with us forever.

Our oceans are in an environmental mess. Rising sea temperatures are causing coral reefs to lose their kaleidoscope colouring and make them more susceptible to disease. Our seas are unceremoniously being used as dumping grounds for vast quantities of waste. And we are emptying them of their fish, their life force.

On my travels I’ve witnessed the devastation being caused to our seas. I’ve seen how industrial longline fishing – baiting a single line with hundreds, sometimes thousands, of hooks – has destroyed rural shark-fishing communities. I’ve watched turtles being pulled apart, alive, in the markets of Dhaka, Bangladesh. I’ve seen how dynamite fishing has decimated Zanzibar’s Pemba Island, once one of the most biodiverse places on Earth. And I’ve discovered infant victims of Namibia’s annual seal cull. Having seeing all this, it’s difficult to retain a sense of optimism about the future of our oceans.

I’m asked regularly what the solution is. I have plenty of theories and suggestions, but there is one simple point I keep coming back to: there are too many of us competing for too few resources. Until the world’s overpopulation is addressed, our oceans will continue to slide into oblivion. – Aaron Gekoski

Aaron “Bertie” Gekoski is an adventurer, underwater/land photographer, presenter, journalist, travel writer and film-maker. He has spent the last five years documenting man’s complex relationship with nature. His work has taken him on an undercover mission to Namibia to expose their annual seal cull, he has lived with rural shark fishing communities in Mozambique, pursued the ‘tortoise mafia’ through Madagascar’s sacred forests, trained as an anti-poaching ranger in Zimbabwe, reported on a religious ceremony in Bangladesh where up to 100,000 turtles are killed, and more.

Aaron is supported by Cameras Underwater

King Of Dolomites 2015 The Peruvian Grind 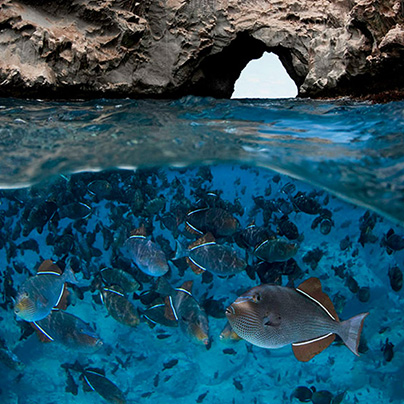 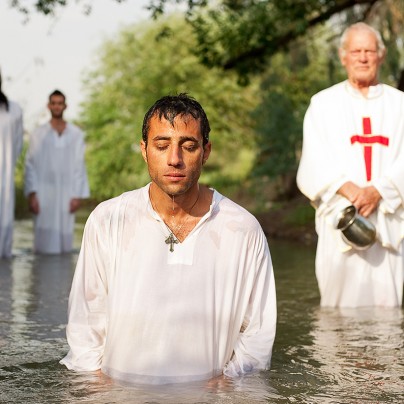