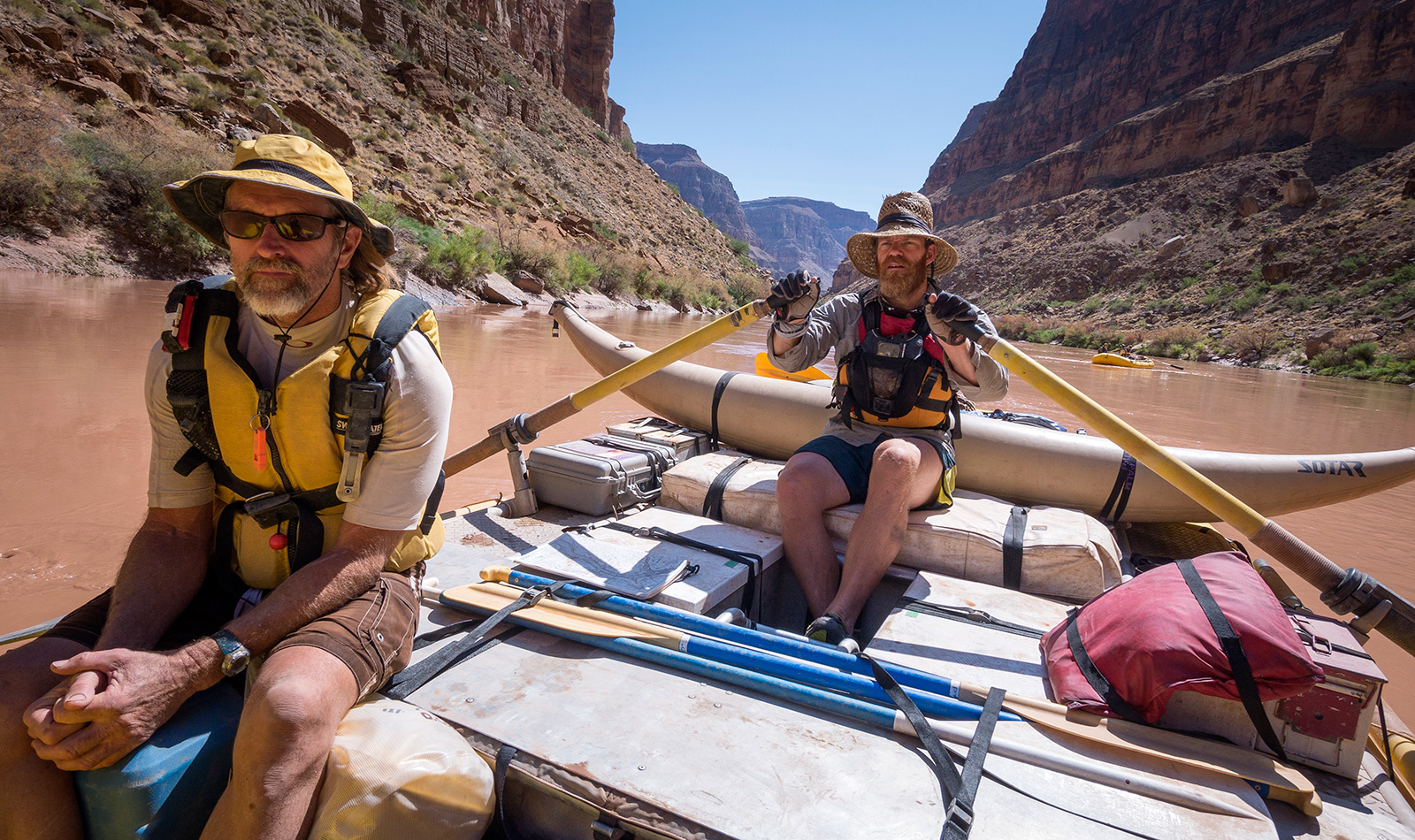 A River Journey Through The Grand Canyon
Hannah Maia Taylor

Standing on the jagged rock looking out over the river, we were all trying to discern a pattern. I was desperate to overlay some sanity to the chaos in front of me. The rock we stood on was from a lava outcrop overlooking one of the best-known rapids in continental USA. The stone was smooth below our feet, worn by the shoes and sandals of many paddlers before us; a testament to the power and gravity of the pulsing water we were trying to fathom. What had the people before us seen? Which way did they go?

Before us was the appropriately named Lava Falls and it was everything I had expected and so much more. Akin to staring into a fire, we looked into the river in front of us and were mesmerised. Our eyes taken on a journey our bodies weren’t sure they wanted to embrace. I was scared and there’s no other way of selling it. We were two weeks into our trip down the Colorado River through the Grand Canyon and everything that had gone before seemed to pale into insignificance compared to this. All other rapids we had encountered had had a way through them that you could visually see; an area where an 18ft raft could potentially sneak through. Lava Falls was different. It was big, munchy and waiting to eat us up.

Thirteen days ago our team of eight had launched from Lee’s Ferry. We packed the boats under the watchful eye of our outfitters. ‘This goes here’, ‘not that way’, ‘strap this way’, ‘squeeze that in there’…and so it went. The frame, coolers, food, booze and personal gear slowly transformed the behemoth rafts into a thing of purpose: three, 1.5 tonne beasts of burden ready to ferry our hopes and expectations down the river for 16 days. It was a non-commercial self-guided trip so we knew as soon as we pushed ourselves away from the shore we would be on our own.

Now we stood at the outcrop of lava looking out over the madness of the river below. We had left our beasts tied up to the shore some 600 metres back. We all scouted for the line we wished to run. Eyes are shielded from the sun, arms pointing, heads close together talking about the line – is it a line? Is it a way through or just a series of holes that look less alarming than the others? Is the water high enough to take a left line – we’d read about a left line?

Before us was the appropriately named Lava Falls and it was everything I had expected and so much more. Akin to staring into a fire we looked into the river in front of us and were mesmerised. Our eyes taken on a journey our bodies weren’t sure they wanted to embrace. I was scared and there’s no other way of selling it. 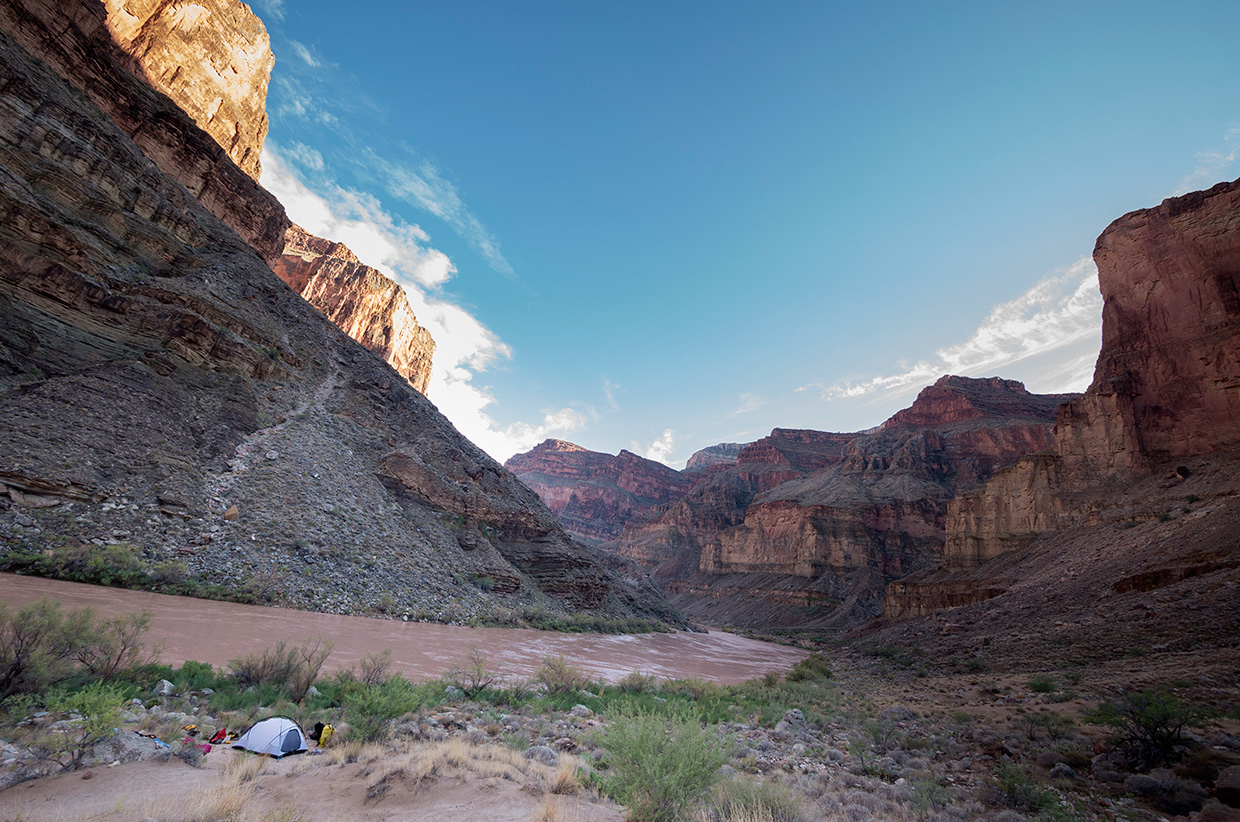 I felt physically sick. I was tempted to avoid the rapid under the guise of filmmaking and clamber along the shoreline once the boats were through…but deep down I knew I had to take on our nemesis or I would forever be disappointed with myself.

The fear was boiling away, mixed inside me with a healthy dose of excitement and adrenaline. It didn’t make for a perfect cocktail; perhaps a little lighter on the fear next time. I mull over the idea of a city break. Can museums and shopping really be that bad? I felt physically sick. I was tempted to avoid the rapids under the guise of filmmaking and clamber along the shoreline once the boats were through. But deep down I knew I had to take on our nemesis or I would forever be disappointed with myself.

Suddenly there was purpose in peoples’ movements; a decision had been made. A line of people walked past like a centipede. I joined the end as we wiggled our way back to the rafts. On returning to the boats I splashed my face with water in an attempt to revive myself. The water was cold. You can read out the water temperature but it means nothing until you’ve actually stood under baking azure desert skies, up to your ankles in 4°C water. It’s painful, and occasionally invigorating.

Looking around at our team of eight I couldn’t help but be proud and impressed. What a mixed bag we’d got together. Those who’d never rafted before, balanced out with a smattering of river guides and a few characters who lay somewhere in the middle. It was always going to be a ‘get stuck-in type of trip’ and that’s exactly how it turned out to be.

To be in the canyon is spectacular. It’s far more than just rapids and water. As you float along the river the walls of the canyon grow in height on either side of you like a sunflower, shooting up as if to meet the sun, growing ever taller still as the days wore on. There are many elements to explore including a myriad of side canyons and little oases with fresh running water. There’s even evidence of previous occupation and exploration throughout the ages, which is astounding.

We pushed back into the current. My sickness immediately subsided; there was no place for it anymore. We were committed and wholly focused on the task at hand. A right line was the general consensus but there was going to be a huge wedge of luck in getting through. Patrick, Dwight and I were in the lead boat. We hit the tongue first and pulled hard right before the oars were knocked out of Dwight’s hands. We lost the line and from there it was a case of ‘T-up or go over’. Dwight managed to get the oars again just in time to hit another huge wave square on. Pulses of water knocked the oars from his grip again. A desperate scrabble for them ensued as we headed straight for the biggest waves at the bottom that we had been desperate to avoid.
The water reacts to obstacles like rocks, ledges and holes by becoming stacked or bunched against these obstacles and creates waves that stand in place whilst water flows through it. We were about to collide with our wave. If we got it right we could flow through without flipping. We collided and a wall of water went over the front knocking Patrick and I down. The boat stalled, but then bounced up and over. We made it! If only just.

Our two other boats were less lucky. The oarsman on the second boat made a good entry but was pushed hard right and got stuck spinning against a huge rock. Pulsing up and down against the slab and being spun around at the same time. Our third boat fared no better; like us they had been knocked by the power of the first waves and had lost the grip on their oars. Whilst reaching for them, an oarsman was dumped into the water. We had a long swimmer, someone in the rapids. This was really not good.

I can’t imagine what swimming Lava Falls must be like. But what I do know for sure is that the look of the ashen, pale-faced of oarsman, when he was finally pulled out of the water, is the closest I ever want to come to experiencing that long swim for myself.

Our second boat, spinning and swirling in the deceptively dangerous monster rock eddy, finally managed to get out and pushed through the rest of Lava Falls to join us. Everyone had a fairly emotional reunion. We were all in one piece and alive to tell the tale. Lunch in a shady spot enabled us to gather ourselves physically and emotionally. We had taken the worst and we’d come through it. There were still rapids to run, days left to paddle, but we felt we’d put the most serious stuff behind us.

Hannah is a freelance filmmaker and head honcho of Maia Media based in Manchester, UK. She loves to combine her passion for the outdoors with her creative talents and specialises in creative video production with a focus on outdoor adventures, action sports, travel, tourism, culture and lifestyle. Website: www.maiamedia.co.uk

Her trip down the Grand Canyon was part of her recent three month Megamoon adventure. A sort of epic honeymoon that involved paddling 260 miles down the Colorado River through the Grand Canyon followed by a stint on mountain bikes travelling some 2,500 miles along the Great Divide to Banff in Alberta Canada.
Website: www.megamoon.co.uk

Land of Smiles and Gesture The Land That Never Melts 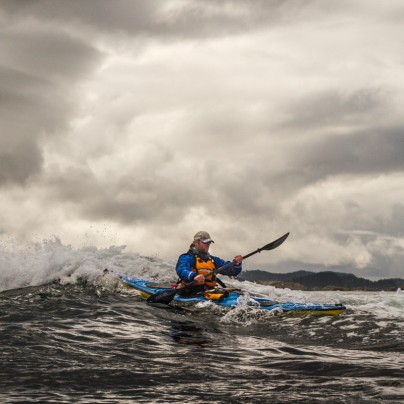