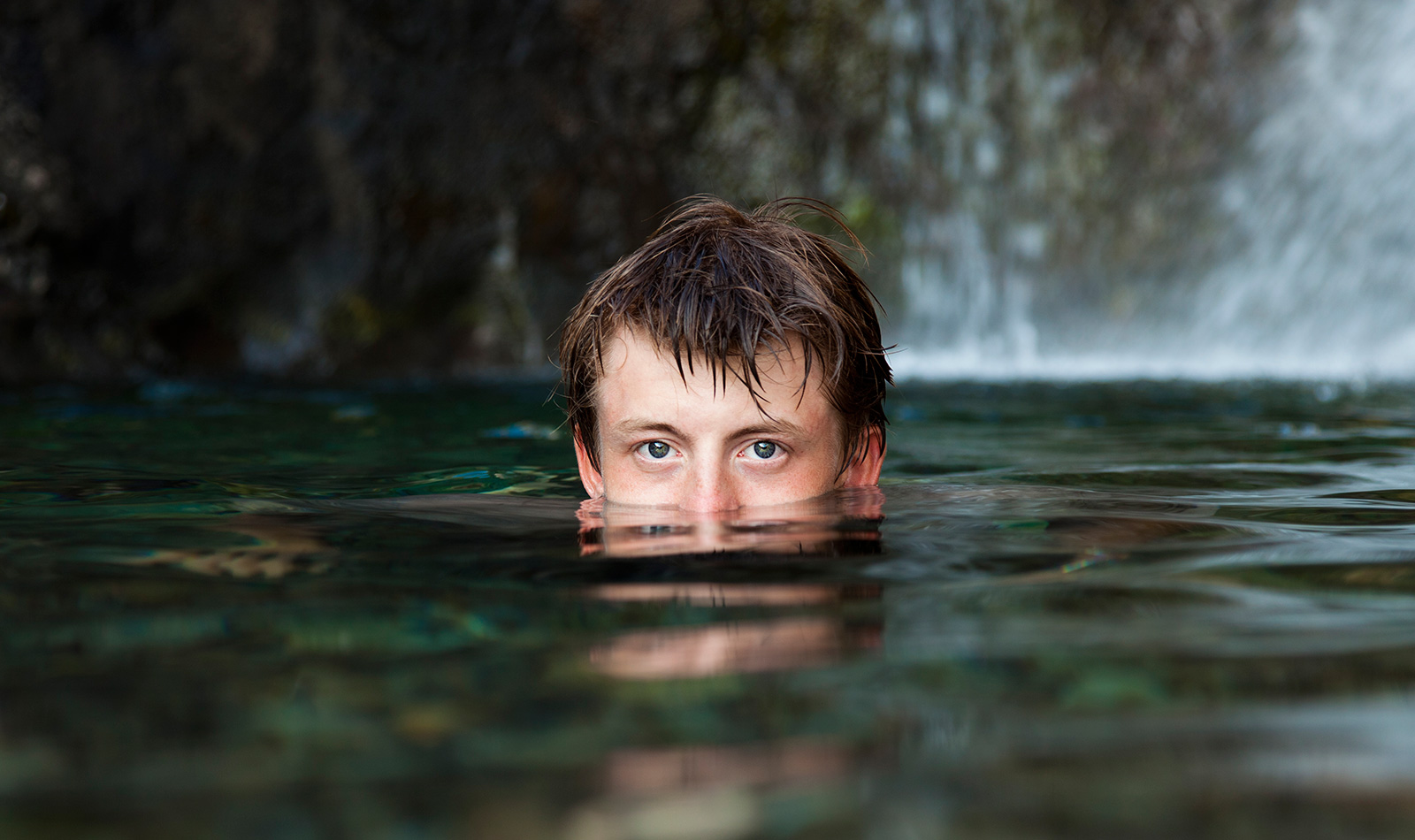 From Machair To Munro (Part One)

Early last year, Will Copestake set out to circumnavigate the entire coastline of Scotland by sea kayak then – upon completion – changing tack and slogging his way up all 282 Scottish Munros, linked together by bicycle. His impressive adventure, which lasted well over a year, was a way for the 22-year-old to ask aloud that important topical question, of ‘what exactly does it mean to be Scottish?’ In part one of his story, Will tells us about the many highs and the occasional low of his coastal odyssey across the shores of his native homeland.
Spray exploded across my bow and – clinging white-knuckled to the paddle – I ducked into the cold surge of the breaking wave, bracing hard. Salt stung my eyes; I could taste it with each gasp for air between flurries of spindrift which whistled ferociously through my jacket. Towering columns of broken swell erupted across the cliffs to my side; a gut wrenching clap-boom of storm churned murky brown. I wanted off this roller coaster, I wanted to land. ‘I want out!’

Riding atop the cresting wave, the chance glimpse of refuge spurred each stroke; one mile, a thousand braced drives of the blades. ‘Come on, just keep going!’

Between my legs water sloshed to and fro with the bounce of the sea, wind against tide, tide against swell, swell against cliff; a perfect chaos in every direction. For the first time the fear of capsize felt very real, no longer a possibility but a certainty. I wanted to race for safety but I knew to make it I must go slow. Every second for the last two hours had been lost in absolute focus; no time to rest my mind or arms, each stroke counting as much as the last to stay afloat.

To my side a wall rose. In a perfect curl of chocolate brown it reared across my deck and above my head. Time slowed. The howl of wind swallowed into the wave. In an instance beauty and fear swirled together as the imminent immersion loomed.

I was caught in storm on the Pentland Firth, the infamous tidal straights on the roof of Scotland. Two and a half months ago I had set out on a journey to last an entire year. I was kayaking alone around Scotland. When I finished I would cycle home via the summit of all the Scottish 3000ft mountains; 282 peaks known as ‘The Munros.’

Between my legs water sloshed to and fro with the bounce of the sea, wind against tide, tide against swell, swell against cliff; a perfect chaos in every direction. For the first time the fear of capsize felt very real, no longer a possibility but a certainty. 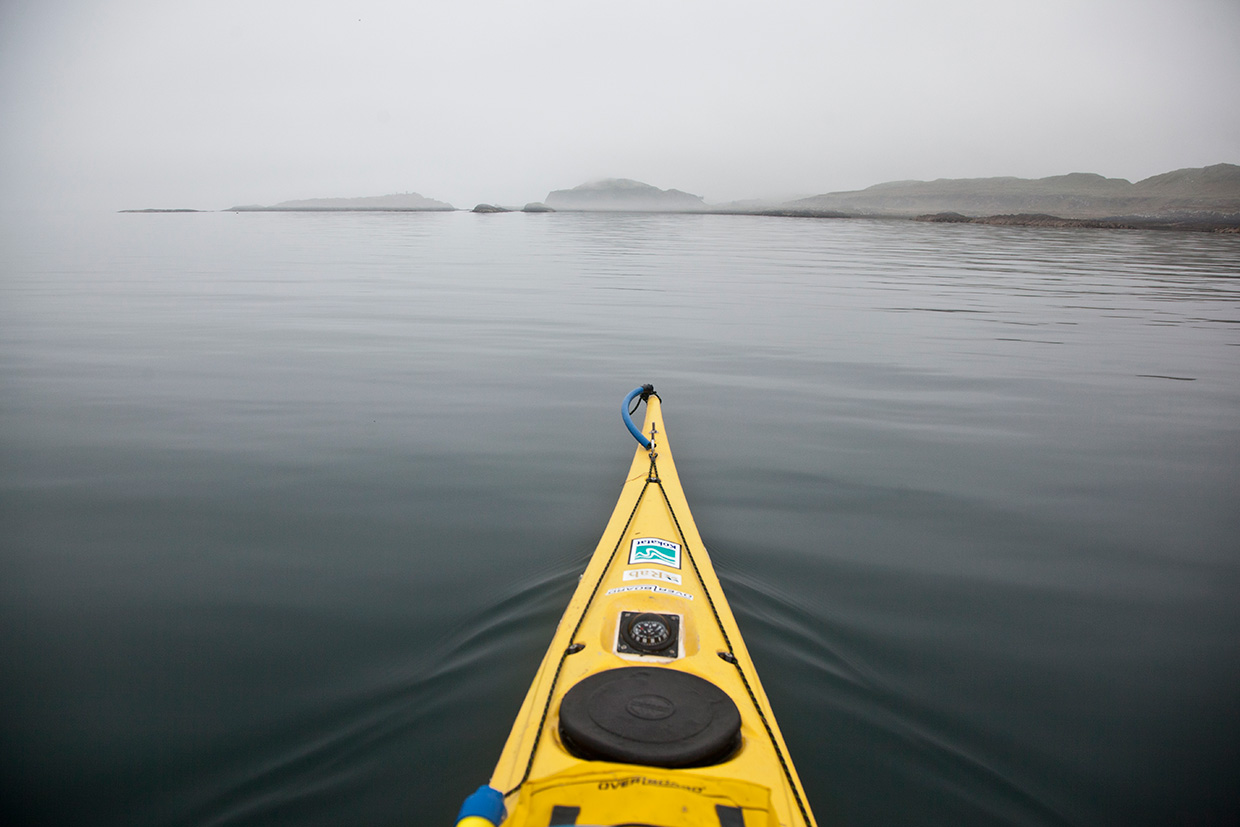 A local sailer approached down the slip, his hand outstretched in greeting. Sat on the deck of my boat shivering with adrenaline and cold I was pumping 12 inches of water from my cockpit.

‘Ya’ll be comin’ round fer a beer when ya dry oot son’ It was more a command than a request. A local sailer approached down the slip, his hand outstretched in greeting. Sat on the deck of my boat shivering with adrenaline and cold I was pumping 12 inches of water from my cockpit. His chuckle turned to a grunt as he grabbed the bow, ‘F*** is she still full?’ My little yellow boat was loaded close to 100kg with food and equipment. With a glance to my still shivering arms, to the boat and then across to the waves outside the harbour he shook his head…’yer mad boyo.’

I left university in a flurry of library books and empty coffee cups with an idea to escape the confines of a timetable. So it was that with no small amount of irony that I immediately found my life dictated by a new one: the tides. As a Highlander, my preconceived bias that ‘south is soft’ was quickly shattered after the very first day on the sea. Joined by my father, we left on the very western border on the River Esk; our ‘downstream’ stretch to the Solway firth was a draining battle against strong winds and tide. The wide open sand flats of the Solway estuary were hard. Exhausted, we were forced ashore for three days while a spring gale battered the coast.

With only a few short sea kayak journeys as practice, the learning curve was steep and often scary. I was alone now, every choice and consequence lay on my shoulders which were already stiff and aching. Intimidating open crossings, short rocky headlands; cold morning starts, hot afternoon sunbathes; remote campsites, thriving pubs; mirror calm, relentless waves. Each day was different. I had only paper maps and charts to guide ahead. Routine became the choice of tide and wind. Anything above a force six – where the waves were steep and capped in white – meant a day ashore to rest and explore. Paddling only with the tide in six hour intervals meant the occasional 4am start; I would climb into wet neoprene shivering and eager to paddle fast to warm up, the rewards came in spectacular sunrises shared only with the early seabirds. As the timetable shifted, the later the start. Eventually 10am ‘lazy days’, arrived where other paddlers, sailers and fishermen would also share the sea with me.

Arrival in coastal towns in a kayak often stirred curiosity from locals and tourists alike, I had expected a lonely endeavour but more often than not was whisked away on ad-hoc tours, to strangers homes for tea and of course the pub. Those often tiny gestures would make any hard day worthwhile, I will never forget the end of one hard day in the rain; hauling my boat up the beach to discover a steaming cup of tea left by my discarded clothes. Another evening I discovered the ultimate Scottish dilemma: what to offer if not beer nor cigarettes? – the friendly harbourmaster returning later with a six pack of Iron Bru – a unique fizzy drink made with sugar and iron girders.

The west coast’s reputation as a kayakers mecca is well founded; pristinely remote sandy beaches, towering cliff lines and endless islands were met with regular otter, eagle and even whale encounters. The sense of community at each small town balanced with wonderfully wild isolation. 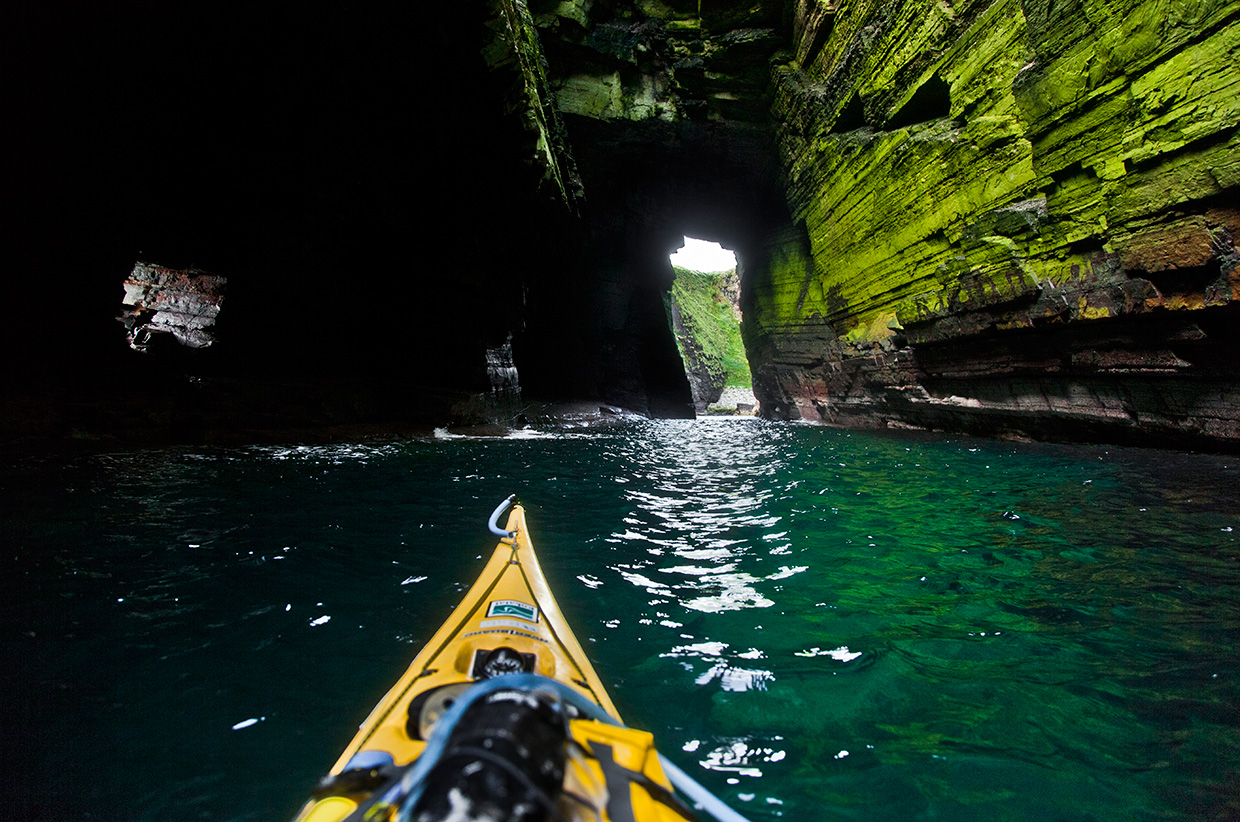 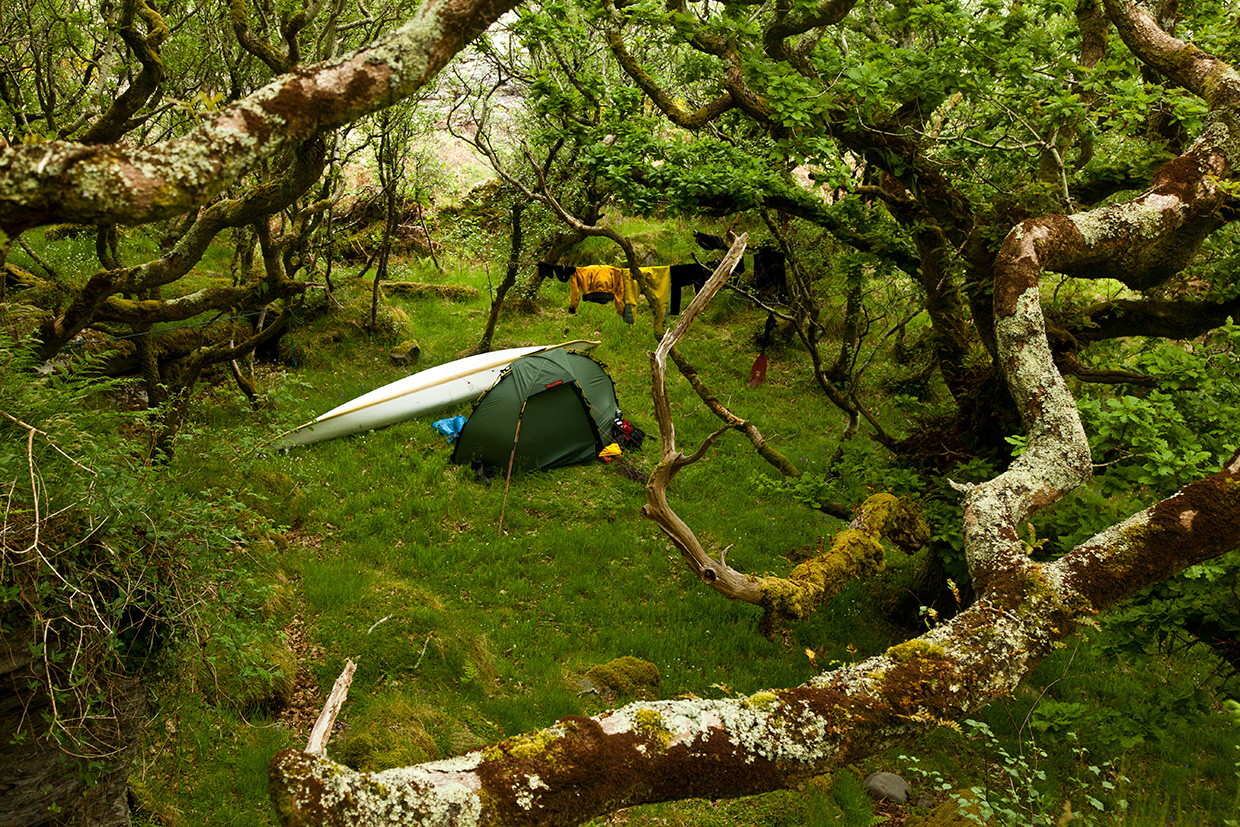 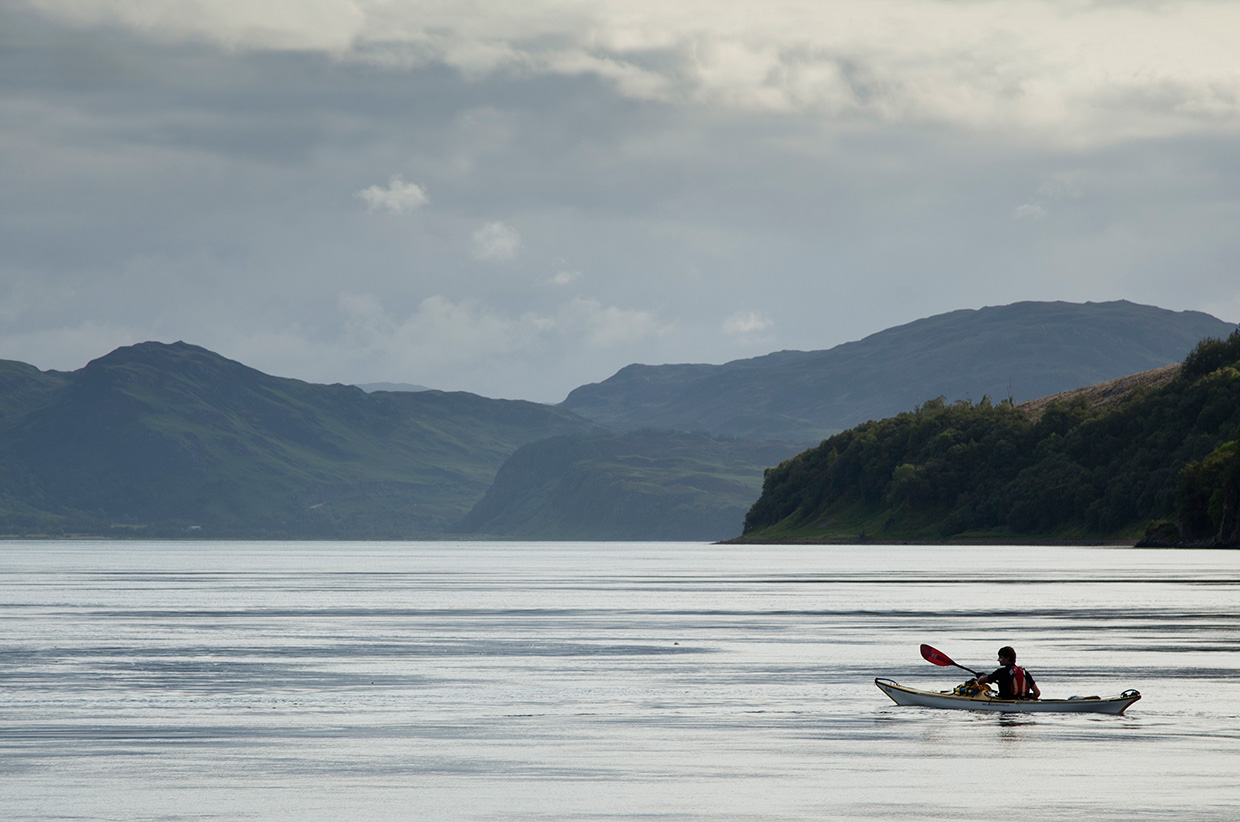 Occasional detours in the trip to ‘bag’ those hills less accessible by land saw my first munro on the isle of Mull which was soon followed by the remote Knoydart hills and Skye Cullin. The pause on land allowed for welcome company to join along the way, a gang descended on Skye to climb and I was joined with Tess in a kayak along the west coast. Being her first time ever in a sea kayak the 120 mile leg was delightfully paced.

Returning to paddling solo felt all the more alone as I paddled onto the roof of Scotland. Here the tides were strong, coast exposed and cliff lines forced commitment. The towering walls carved by eons of exposure made each oncoming day worth another night of worry. Once around the corner the hardest sections were over; the finish line was in sight.

I had somewhat written to east coast off to be a long slog of sandy bays and open sea; to my surprise some of the most spectacular and intriguing sea stacks, caves and tunnels kept each day interesting. The many days following along endless sands were greeted with a comforting knowledge that whatever the weather or tide I could simply land. Just as I had begun, I was joined with my father for the final leg to Berwick-upon-Tweed were a dram was poured across the bow and celebratory fish and chips were duly devoured. In four months I had found a love of life on the water, with a steady rhythm in the slow pace of paddling I had seen much of Scotland’s fringe. Looking up at my boat tied to the car and at my bike which leant against the wall, I felt ready to go inland to the hills. I was half way home!

Read Part Two of Will’s journey – climbing all 282 mountains over 3000ft in Scotland.

Read Will’s account of crossing Iceland on foot – from its southern most corner to its northern most tip.

Will Copestake grew up in Ullapool on north west Scotland. After a childhood exploring the local coast, gorges and hills he took his love of adventure to New Zealand. During a 10 month gap year he hiked the famous ‘Great walks’ and discovered a passion in the outdoors. Upon returning to Scotland to begin a degree in Environmental Science and Outdoor Education at Stirling Will and friend Remi McMurtry hiked across Iceland from south to north.

Aged 22 years old Will circumnavigated Scotland solo by sea kayak before cycling back home to Ullapool via a winter ascent of the 282 Scottish mountains above 3000ft known as the Munros. Now 23 Will is following his passions in photography, writing and the outdoors.