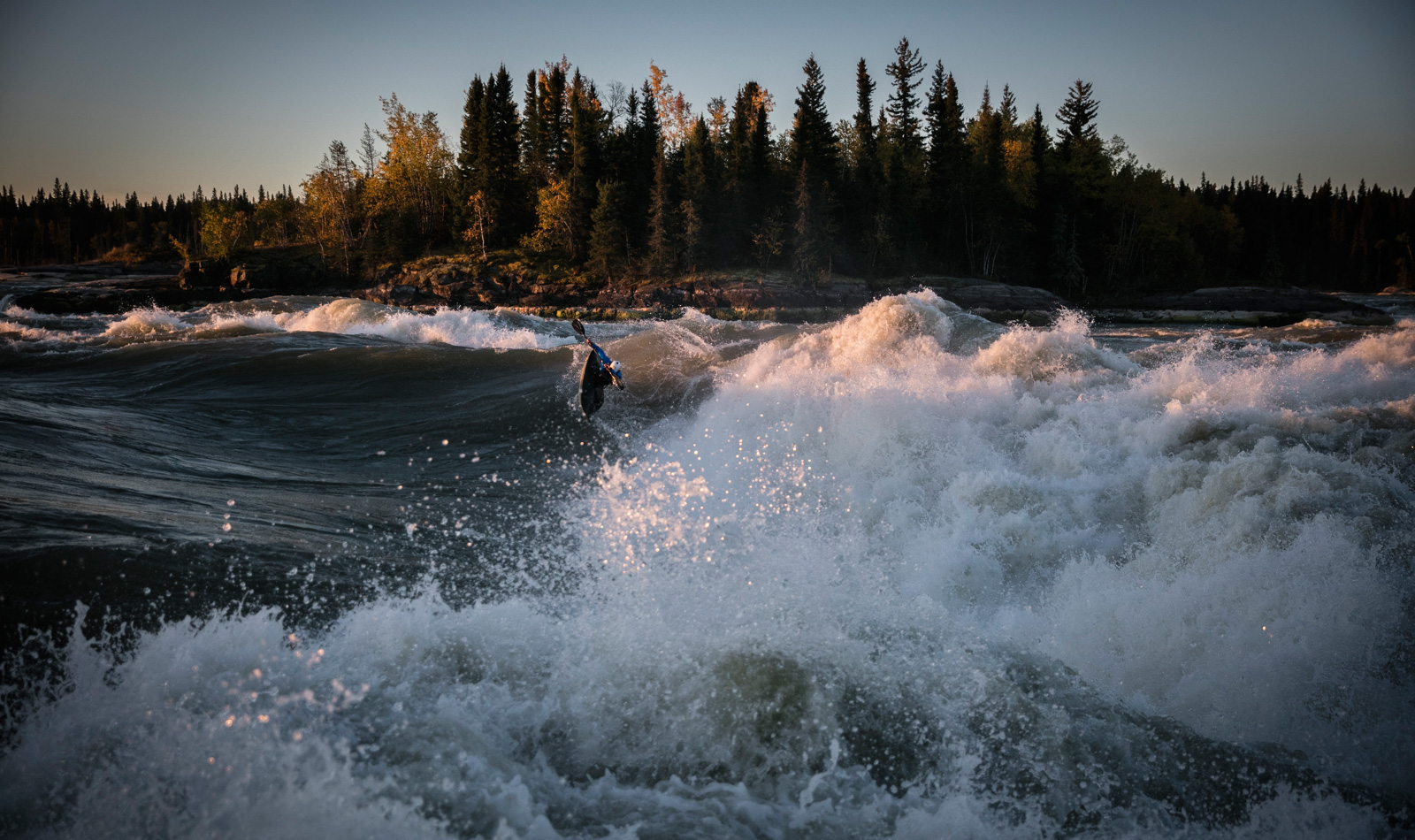 Damp brush crackles in the fire, hissing with moisture as last night’s embers ignite. The first rays of muted, golden sunlight cut through the smoke as it climbs into the cloudless autumn sky. Fall has arrived on the Nelson River in northern Canada. The morning is completely calm. Except for the thunder of whitewater.

A lone figure ambles around the riverside camp and into the makeshift kitchen crafted from tarps tied to rough cut logs. Camp stoves and cutlery are lightly dusted with bonfire ash. Moving aside an empty whiskey bottle, he boils a pot of river water for coffee. There is no plan for today. No agenda. Imagination is the only limiting factor in this whitewater playground. And drinking coffee may be the only grown-up element of the day.

Camping this close to roaring whitewater might keep some from finding sleep. But for the 11 kayakers tucked in sleeping bags nearby, the whitewater vibration is a lullaby. The sharp, northern air feels severe compared to Eastern Ontario’s heat and humidity that they left a few days ago. Perched on the edge of the Nelson River, the soft, hazy, dream-like light is absorbed by the water.

Mornings are slow here. A couple of sips of coffee later, tired bodies begin to emerge from hammocks, tents and tepee-like structures, like lost boys coming out of the forest. Beer cans and boxes of wine are scattered around the fire, like crumbs left from a feast. The scene and atmosphere – the texture of morning – feel like a Canadian version of Neverland. Within the hour, the sleepy scene transforms into the rhythm of daily life that revolves around kayaking on one of the world’s finest river waves.

When packing for a multi-day whitewater trip, carbon kayaks aren’t usually included. But a week ago, a gang of whitewater kayakers – friends, rivals, competitors and brothers – packed into a van and drove for two days from the Ottawa Valley, outside Canada’s capital city, to the flatlands of central Canada, and carefully loaded freestyle kayaks into rafts. Visible from the camp kitchen, two 12-person rafts are parked in a calm eddy called ‘the garage’. Loaded with food, gear, cameras, kayaks, and two propane-fuelled motors, they pushed off shore from the northern community of Cross Lake. The goal: to find big waves and high flows in the wilds of Manitoba.

Camping this close to roaring whitewater might keep some from finding sleep. But for the 11 kayakers tucked in sleeping bags nearby, the whitewater vibration is a lullaby. Perched on the edge of the Nelson River, the soft, hazy, dream-like light is absorbed by the water. 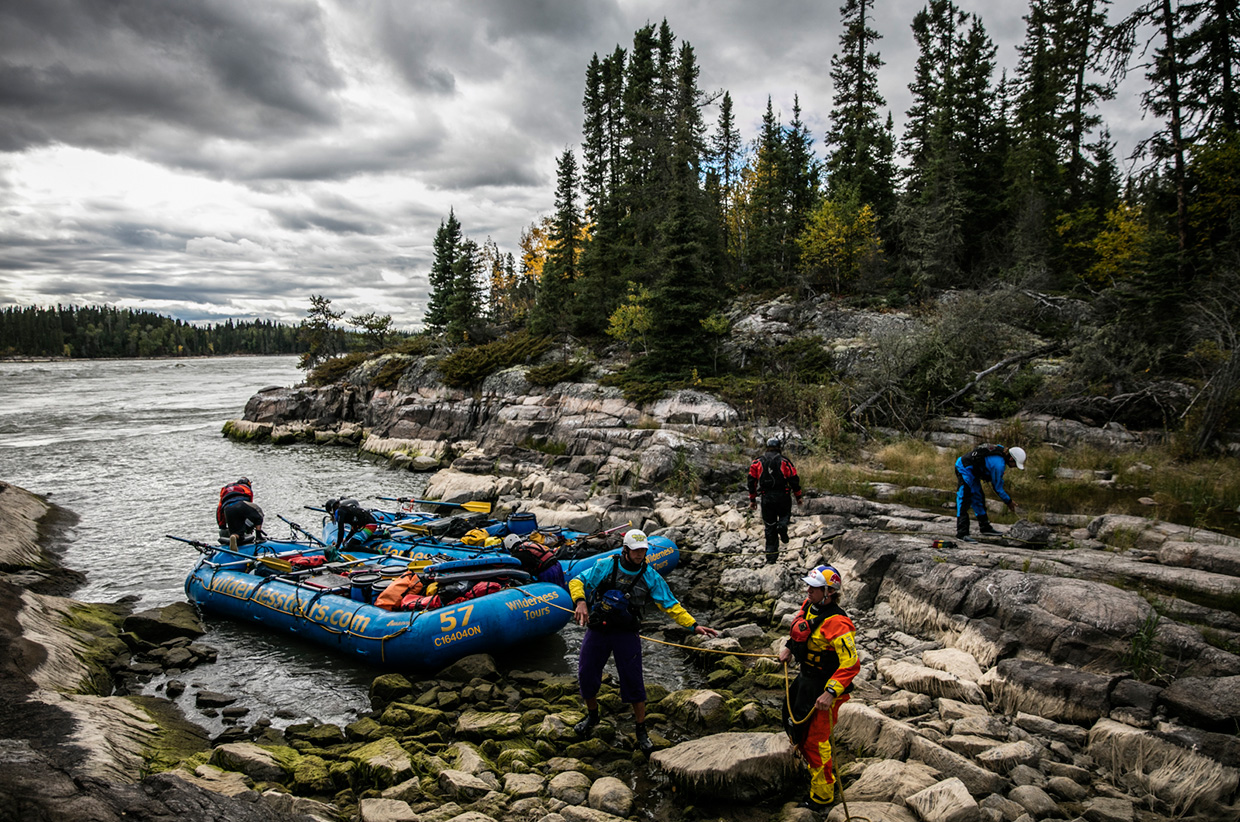 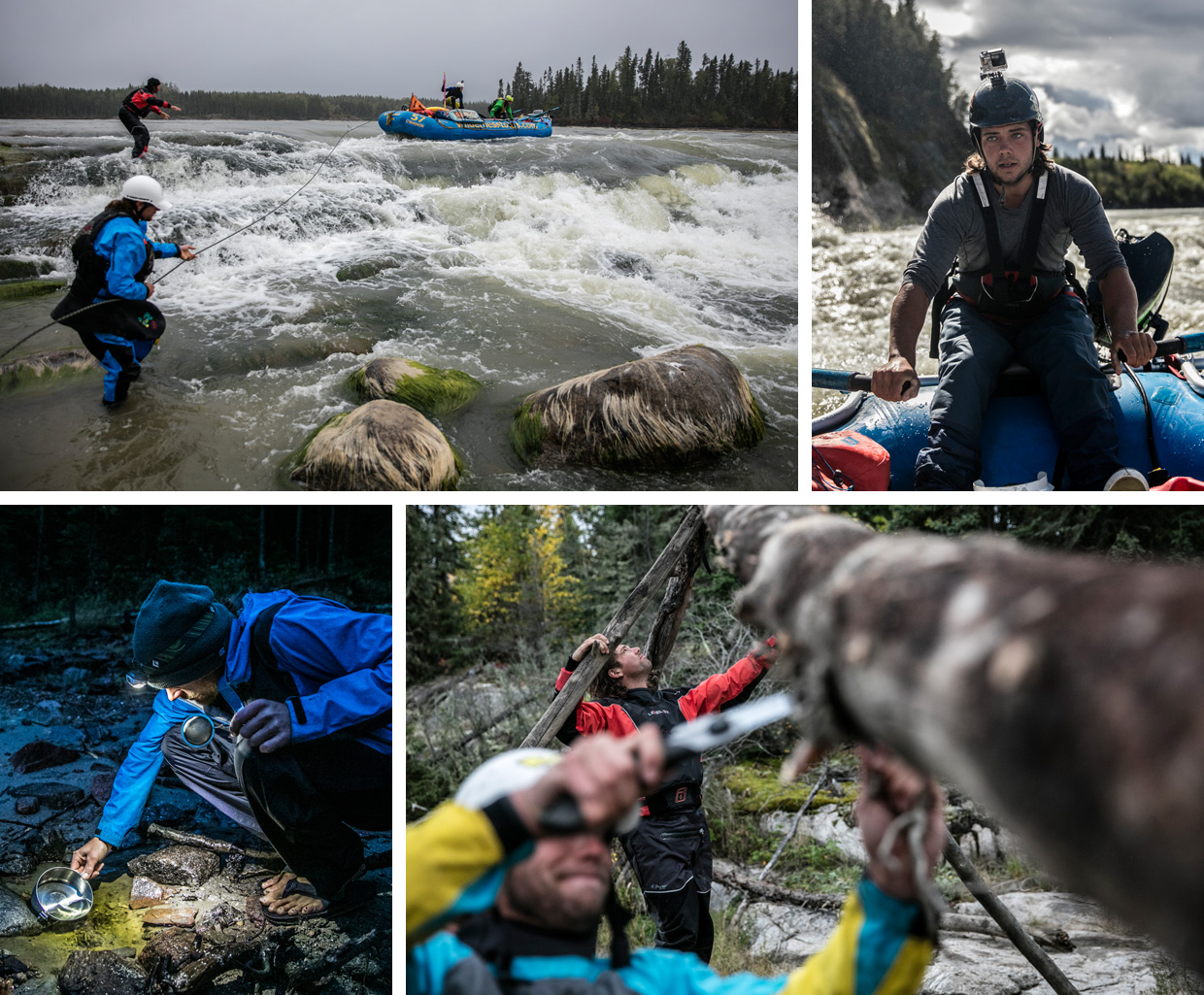 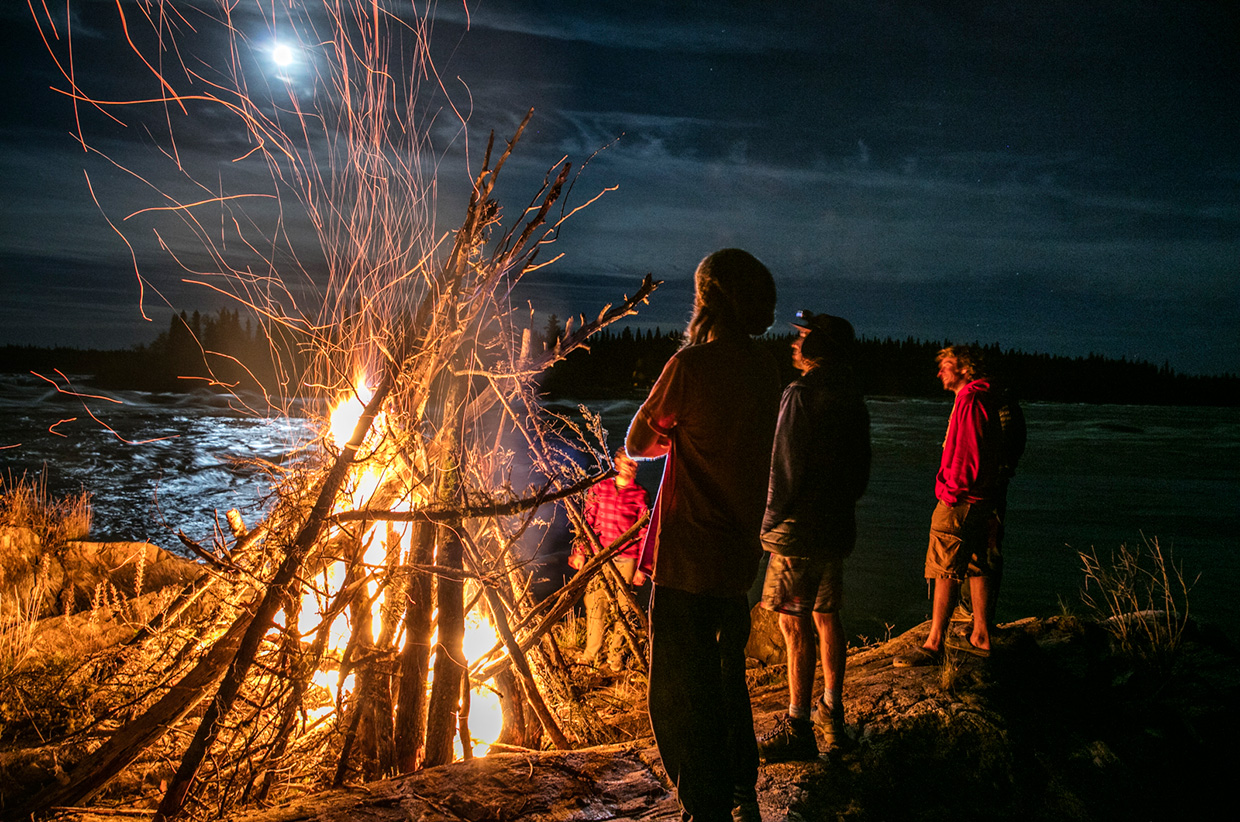 The sweet, amber glow of the moment feels fleeting, yet totally perfect. One to be savoured before the days get short and winter drops in, turning the veins of this river to ice in just weeks. Maybe this ethereal feeling is created when an expedition lines up just right, from tasting the success of a mission not yet completed.

Like many good trips, this one started as a small idea, but over the years it morphed into a trip of fairy-tale status. Coined the Maniflowba trip by the brotherhood of kayakers dreaming of an exploratory mission into Manitoba, this one had the potential to be a complete flop. In contrast to spring Stakeout, the annual high-water season that North American kayakers revere, this trip required a longer-than-usual drive (almost 3,000km) and a collective leap of faith. With limited knowledge of the river and water levels, the boys put it all on the line searching for a playground and play wave. This wave. Dream Wave.

Joel Kowalski approaches from across the fire, wiping sleep from his eyes and rolling his stiff shoulders. He picks up one of the communal coffee mugs, fills it to the brim, smiles, and turns toward the river. Taking in the landscape through the veil of steam, he reflects on the trip that was four years in the making, then brings the coffee to his lips and sighs slightly. A broad smile spreads across his face. Kowalski found the river on Google Earth and outfitted the expedition with gear from his family’s Ottawa River whitewater rafting business. He is standing roughly halfway between the US border and the Territory of Nunavut, beside a wave he only dreamed existed.

He turns around to see the camp coming to life. Some of the best kayakers in the world – friends whom he convinced to venture into the wilderness – put competition schedules, flights, paddling trips, and work on hold to be here. Shuffling around camp in bare feet, skate shoes, river booties and flip-flops, some of the boys are already partially dressed in river gear. There’s a lingering, sour smell of damp thermals, dried by the heat of a smoky fire. The group varies in age from 22 to 33, but everyone shares achy muscles this morning – a result of days spent bouncing on the green face of the Dream Wave. Mere millimetres of ridged carbon Kevlar are all that separate body from hard water. The sweet, amber glow of the moment feels fleeting, yet totally perfect. One to be savoured before the days get short and winter drops in, turning the veins of this river to ice in just weeks. Maybe this ethereal feeling is created when an expedition lines up just right, from tasting the success of a mission not yet completed.

A trio of paddlers – one Brit and two Canadians – carry their boats through camp, bantering loudly as they snake along the rocky shore to the top of the rapid. Laughing and warming up in the eddy, Bren Orton, Kalob Grady and Louis-Philippe Rivest share this pre-surf ritual that plays over multiple times a day. Where grey Canadian Shield granite meets whitewater, a band of neon algae tapers from electric green to shades of brown and into thick, foot-long white algae reminiscent of polar bear fur. This mane of white marks the high-water line, many feet above the surface, demonstrating the power of this river in flood.

There is a balance to sharing this wave. The morning’s first surfers – a kayaker and two river boarders – have just dropped in. Crashing into the foam pile, they start to play. Boys congregate on shore, ready for the highlight reel. Ben Marr and the Paterson brothers share the face of the wave – big enough for each person to take turns throwing tricks while the others cycle on the shoulders. Getting this kind of airtime in such close proximity to each other is a rarity and treat. Laughter erupts. High fives connect. And they continue to surf. 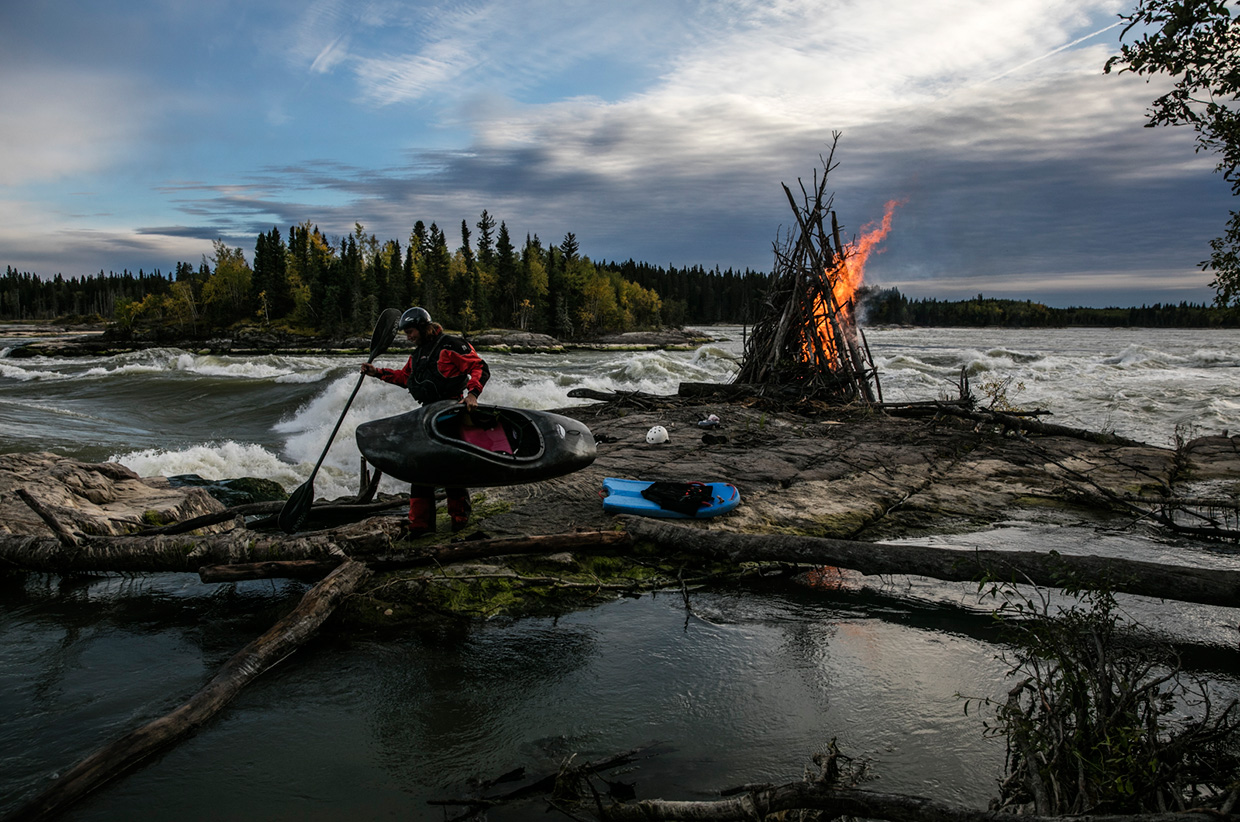 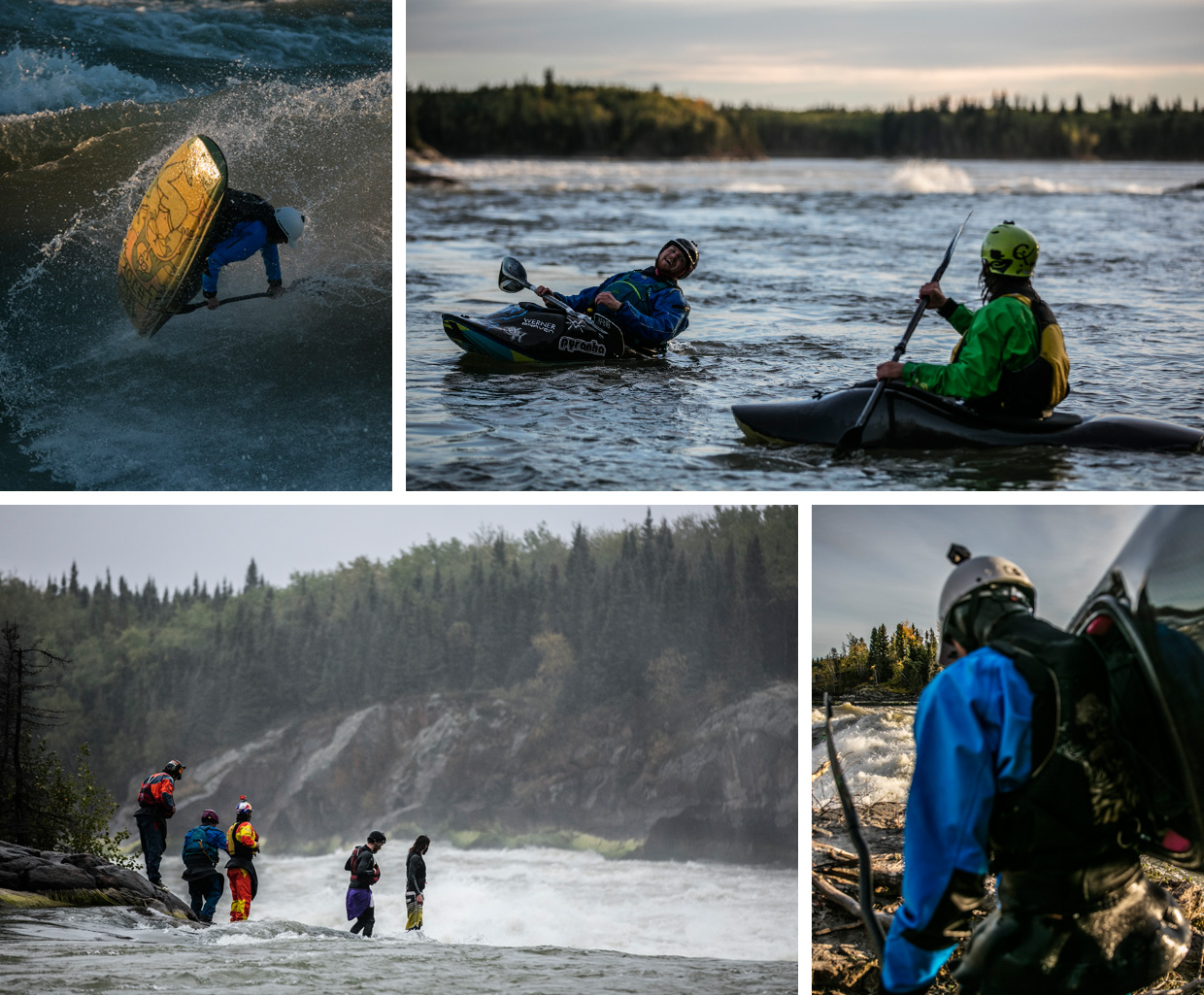 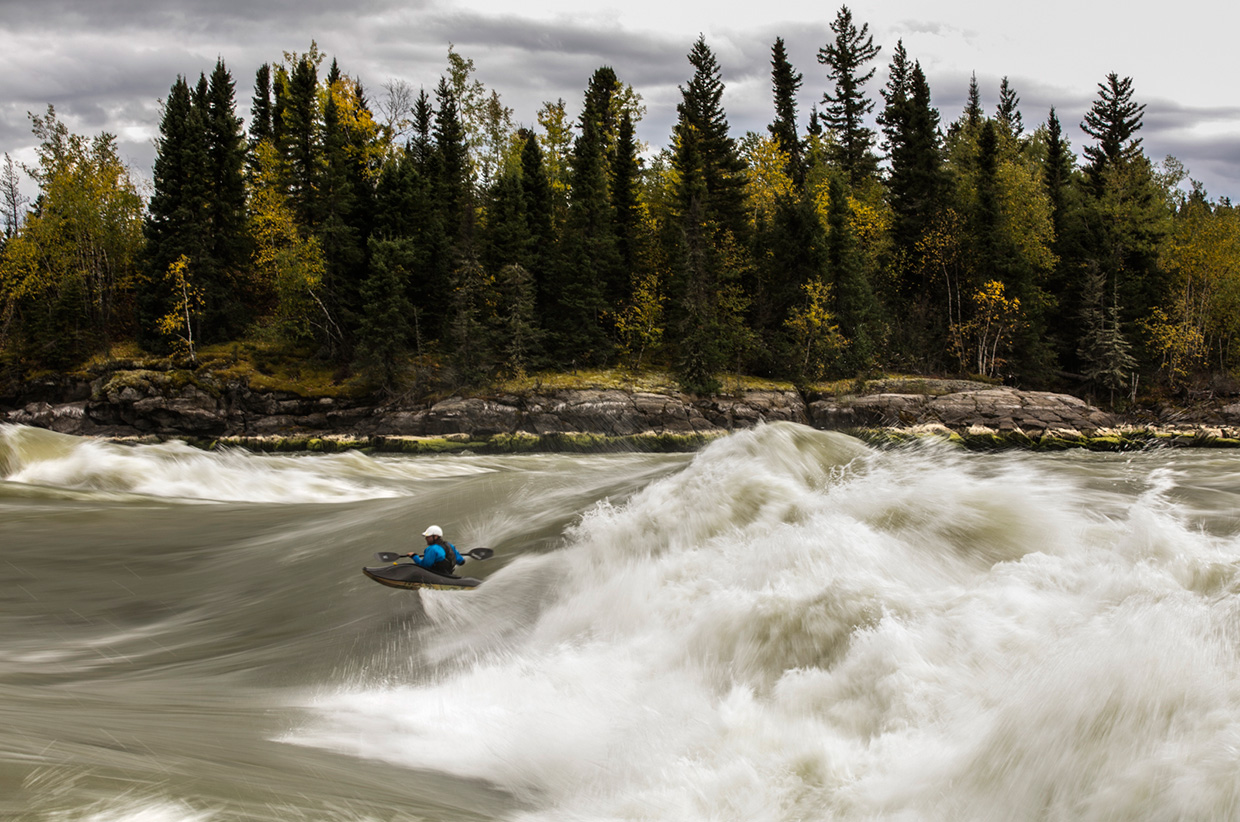 In this playground, the energy is palpable, even from shore. For a few of the kayakers, their surfs are limited to the time it takes water to penetrate the duct tape repairs on their carbon boats; cracks and fissures in the materials are testament to both the amplitude of tricks thrown, but also the power generated by these paddlers. Flying high enough that another kayaker could fit between their boat and the water, and linking combinations of freestyle moves yet to be seen, progression comes at a cost.

But out there on the wave, there isn’t a care in the world. It doesn’t matter that your sleeping bag is saturated from two days of non-stop drizzle. Or that you are running out of beer. The face, crest, and foam pile are all that matter. The feeling of the sun and the spray of whitewater as you rocket down the wave. Freestyle kayaking is a strange mix of element and physics; water and gravity. It’s downstream force and upstream momentum. Fighting against the water, working with it. Your mind drifts, your thoughts become still and your body takes over.

These boys have found a fantasy land. One they can return to every fall from now on. Flecks of grey appear in some of the scruffy beards of these lost boys but age doesn’t matter here. Neverland exists in the wilds of Manitoba. And no-one needs to grow up when life evolves around Dream Wave.

For freelance writer Carmen Kuntz, work and play are a blend of whitewater and words. Currently based out of Ottawa, Canada, she lives the semi-nomadic life of a whitewater kayaker and seeks to share stories of self-propelled adventure and recreation conservation.
Website: www.carmenekuntz.pressfolios.com
Instagram: @carmenekuntz

David Jackson is an assignment photographer who will be spending 2017 photographing Canada’s last voyageur as he traverses the North American continent by solo canoe. Follow the story of Mike Ranta and his dog Spitzii as they cross Canada by canoe.
Website: www.davidjacksonphoto.com
Instagram: @davidjackson__
Facebook: /DavidJacksonPhoto

Isolation Journey to the End of the Earth 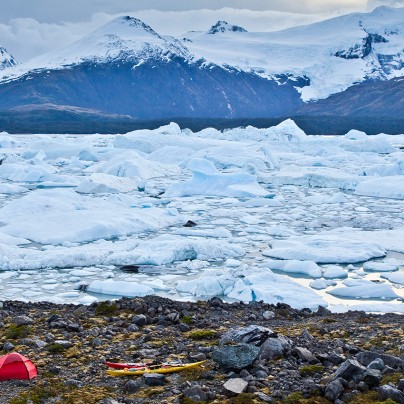