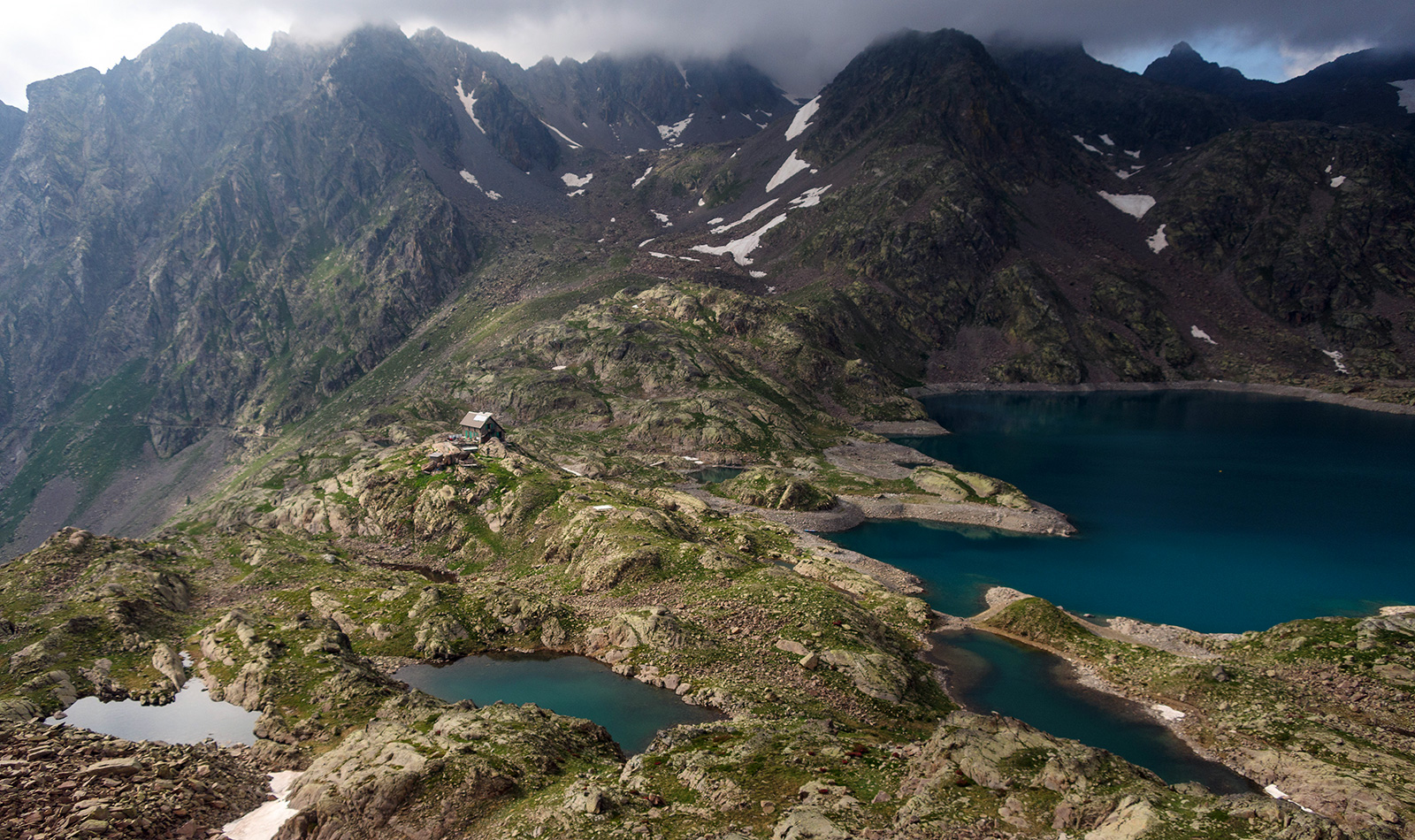 Dawn’s thin glow filters through the fabric of my shelter, stirring me from anxious dreams that evaporate as soon as I open my eyes. The night before had been hard. Playing Russian roulette with thunderstorms had been a risk I’d been willing to take when I began the Tinée frontier ridge two days before, but the hiker’s brain has a habit of forgetting the visceral anxiety of lightning at altitude when in ambitious planning mode.

I stir under the damp mass of my quilt. A puddle has invited itself into my sleeping area.

The lightning had chased me down from the rocky heights last night, energy crackling all around, thunder rolling and booming around desolate cirques. Nobody but me was crazy enough to be up there. I’d pitched my little ultralight backpacking shelter in the only place I could squeeze it between the boulders that littered the ground for miles. Turns out that site selection is pretty important when you’ve left your tent inner at home to save weight. When the deluge came – more torrential than I believed possible from the start, and it only got worse – my pitch flooded instantly, soaking my few belongings and chipping away at my margin for error while lightning bolts arced and exploded all around.

Now, all is silent save the croak of a raven, echoing somewhere over Col du Lausfer. I sit up and open my tent, peeling back the wet silnylon to reveal a view that had been hidden by a curtain of rain the night before. On the other side of a mirror tarn, an abandoned fortress guards the frontier ridge. Its black gun ports draw my gaze. It is only now, as I scan the rocks and rubble of this lonely place high above everywhere, that I realise thousands of fragments of decades-old barbed wire litter the ground all around me, rusting back into the soil.

The door is open, so I creep inside. I flick my head torch on.

The dissonance of this place spooks me. When I planned my thru-hike of the Grande Traversée du Mercantour, a long-distance, high-level route in the Maritime Alps, I had no idea that I’d be following part of the old Maginot Line for much of its length. Dozens of military ruins occupy a high Alpine landscape I’d usually associate with wild nature. Barracks, fortresses, artillery turrets, machine-gun nests, bastions, and ammo dumps share the landscape with scree slopes, rock pinnacles, snowfields, marmots, ibex, and all the other beautiful and natural things of the Alps. There is an unnerving sense of two realities overlapping one another. A parallel world that bleeds to the surface while remaining submerged in time.

I walk down a concrete-lined corridor into the darkness of the mountain. Moisture glistens. I turn left, then right, then through an empty chamber to emerge at a room where wind whistles between two gun apertures. The thickness of the concrete wall surprises me. Looking out, I see the mountainside sweeping down through scree and snow to the forest of larches and purple flowers that carpets the foothills. There is no trace of humanity down there – just the vibrance of non-human life, carrying on doing what it has done for thousands of years, oblivious to the guns that had once been trained on the wilderness for reasons that now seem unfathomable. Behind me, I see what look like bullet holes in the concrete wall.

There had been fighting here in World War II. I imagine the echo of gunfire amongst these peaks. What of the soldiers whose duty it had been to guard this high ground? Was life on the frontier ridge one of tedium and discomfort, or did nature provide some distraction – even inspiration? To me, the mountain landscape on either side of this armoured line looked very much alike.

The lightning had chased me down from the rocky heights last night, energy crackling all around, thunder rolling and booming around desolate cirques. Nobody but me was crazy enough to be up there. I’d pitched my little ultralight backpacking shelter in the only place I could squeeze it between the boulders that littered the ground for miles. 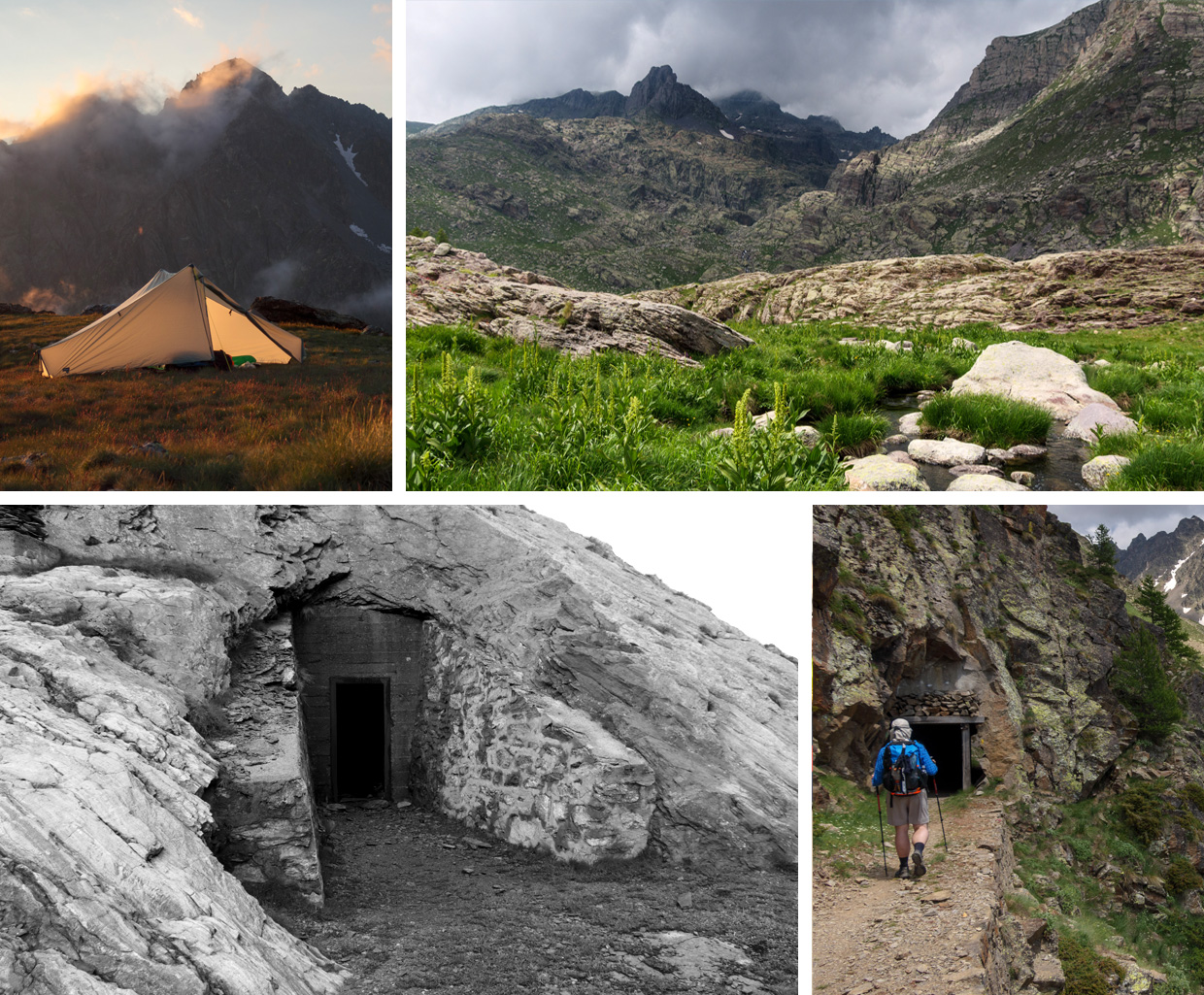 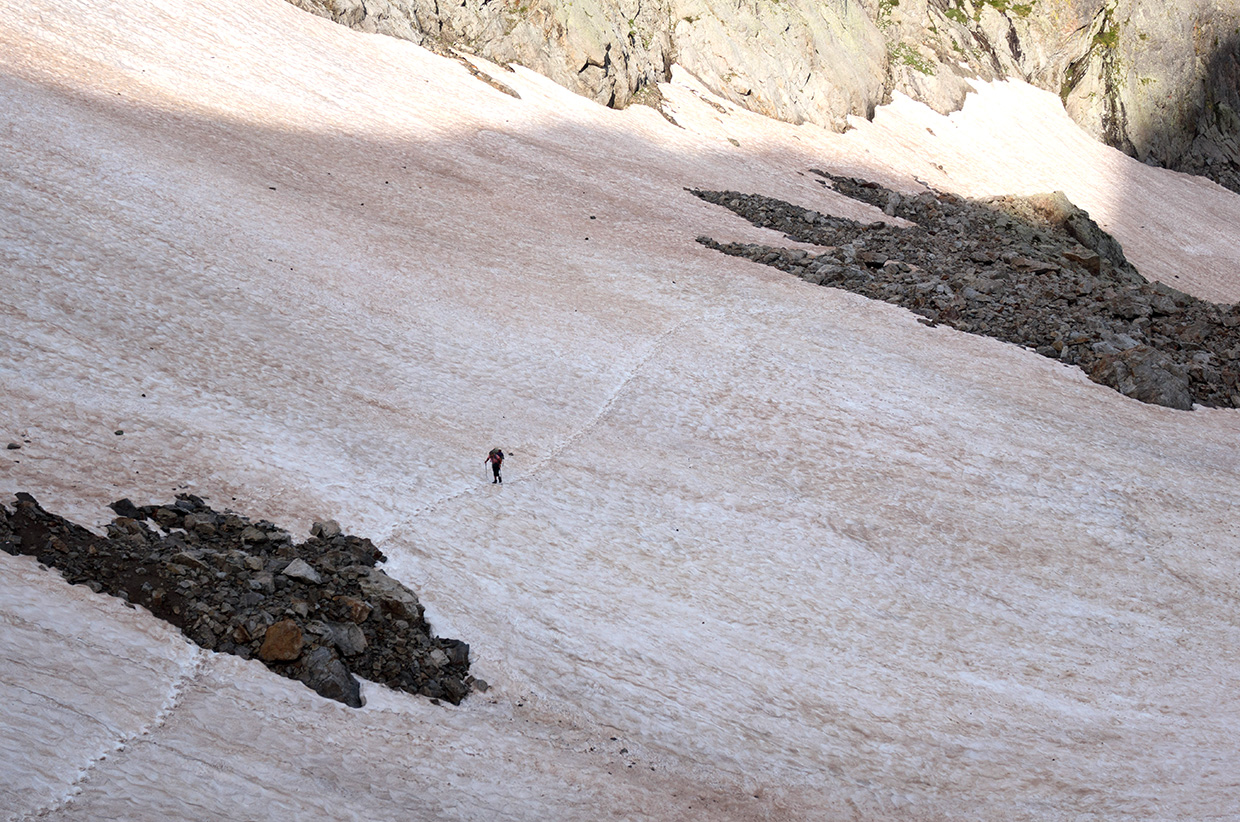 All mountains have something of the borderland about them. The summit ridge divides one valley from the next, sometimes marking the boundary between sunlight and storm. But the borders of nature are logical and predictable, the result of processes that play out over thousands of years. Human borders rarely make such intuitive sense.

It takes time for the true nature of a trail to reveal itself. For a theme to emerge. On the GTM, my first clue came early on the second day when, dropping down a switchback road from a village on the GR5, just before starting the climb up to the frontier ridge, I came across the graffiti slogan ‘NO BORDERS’ daubed on a concrete barrier by the side of the road. I thought nothing of it at first. Only later, when I began to understand the nature of the border my walk roughly followed, did ‘no borders’ begin to make sense.

All mountains have something of the borderland about them. The summit ridge divides one valley from the next, sometimes marking the boundary between sunlight and storm. But the borders of nature are logical and predictable, the result of processes that play out over thousands of years. Human borders rarely make such intuitive sense. Why was this ground France but this Italy? Because pieces of paper had been signed at some point – some point in the very recent past, on the timescale of the processes that have sculpted cirques, given birth to rivers, and trimmed treelines. A blink of an eye. And then, more recently still, young men had bled and died to hold that border, or to move it.

On my third day I meet an Italian hiker named Federico. He comes up behind me, poles clicking on the rocks, while I’m attaching Microspikes to cross a field of high-angled snow. He dances across the line of melted-out steps using his poles for balance, and when I join him on the other side I ask him about his walk. ‘I am not hiking the whole GTM,’ he says, ‘but I come to these mountains most years to walk the big ridge between Saint-Etienne-de-Tinée and Isola 2000.’ He tells me that he is from the Val Gesso, which begins as a handful of cirques high in these mountains. I ask him what he thinks of the border. ‘It makes no difference to the people here,’ he says, but when I enquire about the ruined forts all he will add is that times were very different back then.

As we hike on, I keep my eye on the rough terrain ahead. The conversation shifts to the subject of wolves. ‘You can’t talk about Mercantour without talking about wolves,’ Federico tells me. As he outlines the situation, I begin to see why. The wolf had been extinct in the south of France until the 1990s when a small number crossed the border from Italy. Now, several packs thrive in these mountains. ‘You’ll never see or hear one,’ he says, ‘but the French farmers want them culled. I like the idea of them living here, out of sight. The border does not exist for them.’ He adds that, from what he understands, the public is mostly in favour of protecting the wolves.

As the days pass, I get back into the rhythm of life on foot. I rediscover my trail legs. Moving away from the border and its sombre reminders of past bloodshed, I revel in mile after mile of glorious forest – and at every turn some part of me hopes to find a wolf, despite the odds. I have to be content with the ibex that clamber expertly up cliffs in their search for food.

Between Madone de Fenestre and the Vallée des Merveilles I enjoy some of the best walking I’ve done anywhere: sunshine, snowy cols, rocky peaks, and just the right level of difficulty. But the weather changes as I drop back out of the high mountains. Fog swallows everything and I spend hours trudging along vague trails in a mist so dense I’m tempted to try swimming in case it’s any easier. The barking of dogs and the clamour of cowbells reach me heavily distorted through the soup, and I begin to sense that once again I’m approaching a borderland of sorts. When I stop to camp on a narrow grassy ridge the sun barely pierces the murk on its final descent to the horizon. Distant thunder keeps me awake that night, reverberating around the peaks to the north like a half-hearted artillery strike. Before sleep comes I mark my camp on the map. I’ve stopped for the night on a mountain called L’Authion. 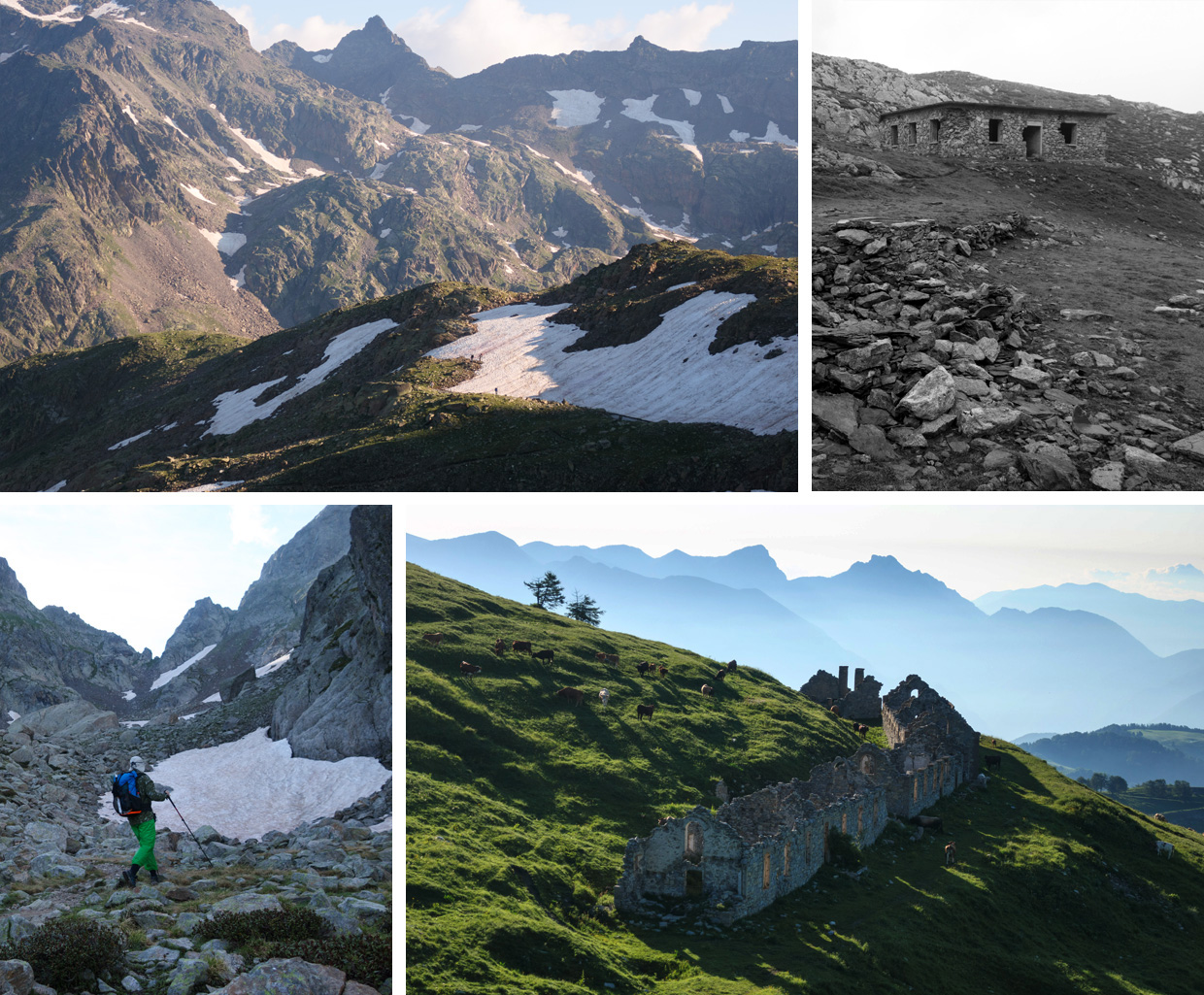 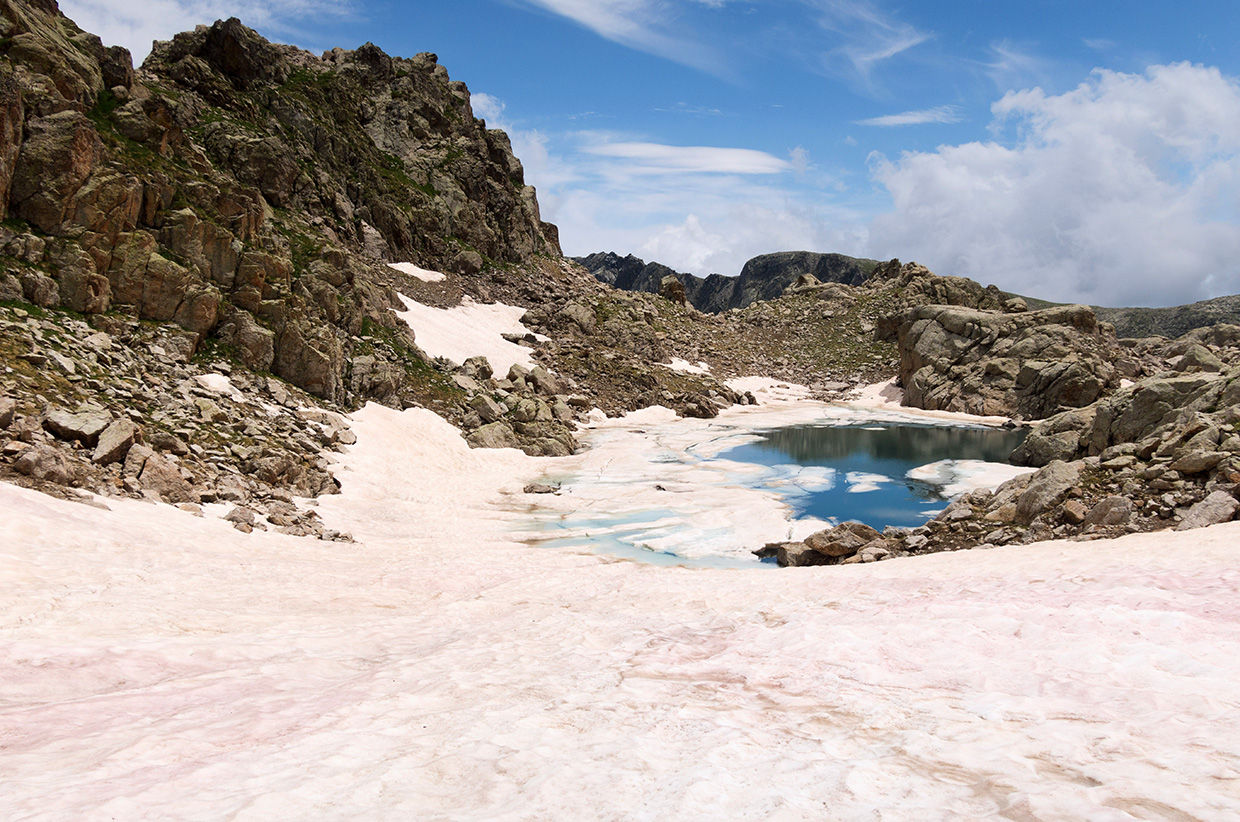 In a repeat of my difficult night on the frontier ridge, when I open my shelter the next morning the first thing I see is the looming monolith of a ruined fort – a much bigger one this time. The sun blazes directly behind it, casting the Redoute des Trois Communes in silhouette. This smashed concrete bastion has a commanding presence high in the foothills. I strike camp and hike on. Only when I realise that I’m walking along the grassed-over and cow-cropped remnants of a trench system do I remember why the name Authion sounds so familiar.

Although far from the French-Italian border, this massif has long been of key strategic importance. In April 1945 the Allies took this mountain back from desperate German and Italian forces who had dug in here with artillery, barbed wire, and anti-tank mines. I look back at the redoubt. Its facade is pock-marked with shell holes. Part of the structure seems to have been sheared away by gunfire.

That peculiar sensation of walking in two worlds at once returns with a vengeance. Above, the sky is an intense blue. I look down at the forested hills receding in haze to the furnace heat of the lowlands. Birds sing; a squirrel hops between branches in a larch tree nearby. But then I look along the trail and see the bombed-out remains of barracks buildings, surrounded by trenches and shell craters between which cattle roam. On the other side of the hill there’s even the husk of an American battle tank, set in concrete like a gnat preserved in amber.

As I descend from L’Authion, I pass one last gun bastion, its huge square-cut windows looking down on a farm track. The door is ajar. I poke my head inside. Someone has stuck a poster on the concrete. There’s a picture of a wolf, a graphic of a rifle with a big red cross through it, and the slogan ‘PROTÉGER LE LOUP’ (protect the wolf). I smile, and wonder if this location was chosen deliberately for the poster, or if it had just been a convenient surface. Either way, it pleases me. I hike on, hoping that someone else will pass by and reflect on this joining point of two worlds.

Alex Roddie is a writer, editor and reformed climber who loves nothing better than immersing himself in a wild mountain landscape for a week or more – ideally with as light a pack as possible. Alex is Sidetracked’s sub-editor.

Best Laid Plans The Draw of the Faroes 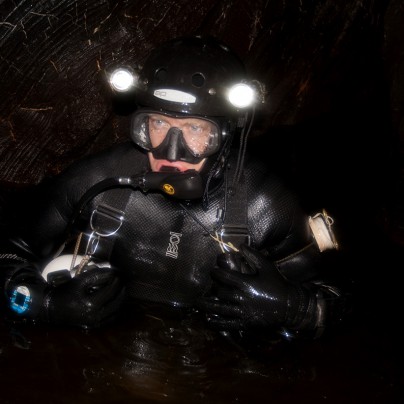 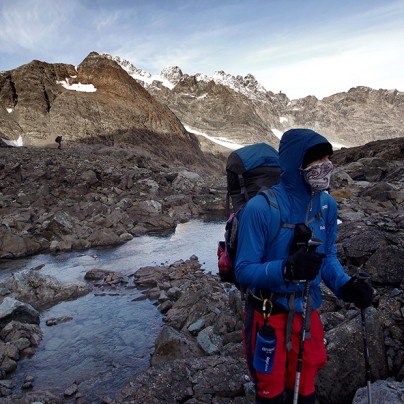