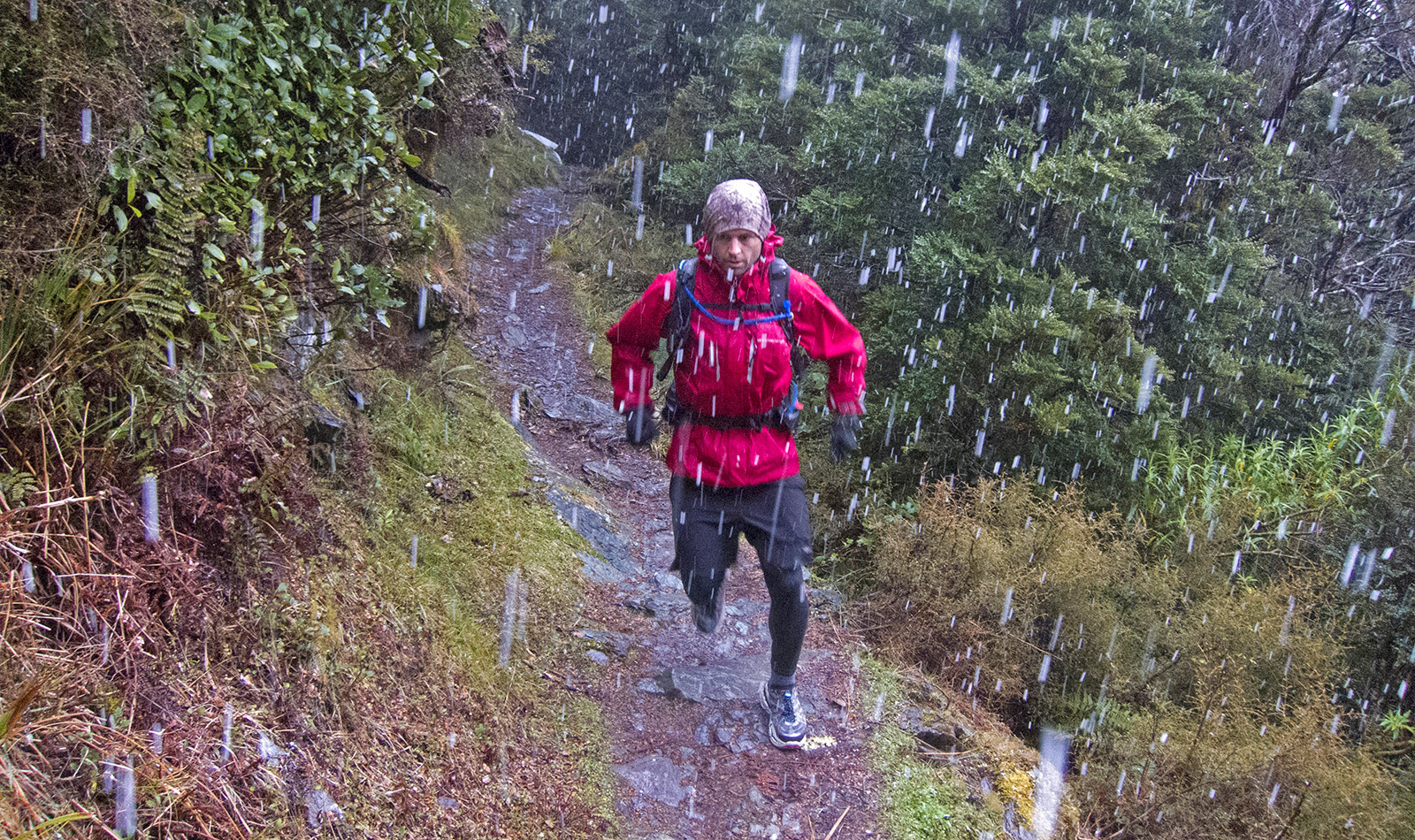 And Then There Were Nine

By the time the New Zealand night catches me, less than halfway around the Heaphy Track, I’m already in serious trouble. But at least I don’t have a masked, axe-wielding psycho chasing me through the woods.

Luke can’t tell me he’s being pursued by this vicious vision, because I’m too far behind him, dealing with demons of my own. He could mention it to Ben, who is running right beside him, but by this stage he’s beginning to doubt his own mind. Our bodies are in a state of mutiny – my knackered knee, his exhausted brain – organ and joint screaming that they’ve had enough.

Things are a bit grim when you can’t even trust your own cerebral cortex, but really, what kind of self-respecting axe murderer would be out here, in the middle of night, in the midst of the New Zealand wilderness? Why would anyone at all be out here, shivering and shuffling along under a cloak of darkness, when they could be warm within the womb of a sleeping bag, in a pot-bellied-stove-warmed hut?

Why indeed. What are we thinking?

Perennially banished to the periphery of world maps by Eurocentric cartographers, New Zealand is a country that seems to occupy a position on the very edge of the globe even when you’re there. Middle Earth my arse – this is our planet’s outlands, and everything about the place shrieks extremity.

Jagged mountain ranges claw at the belly of a southern sky, leaving long white cloudy scratch marks. Stealthy glaciers and great rippling lakes punctuate the interior, while wild rivers charge headlong towards a curvaceous coastline battered over eons into beautifully irregular shapes by the relentless power of the Pacific.

Fabulous rain-strafed fiords, beautiful bays and immense beaches ring the country’s main islands, but this land mass is a long way from settling on a final form. Sudden earthquakes and active volcanoes are reminders that New Zealand is still evolving, and here the planet’s pumping pulse can be felt close to its skin, in warm springs, hot sands and bubbling mud pools.

Given this dynamic and dramatic landscape, it’s no surprise that New Zealand’s twisted topography is densely etched with great walking trails. At some point, however, a bright spark with a sharp marketing mind came up with the concept of officially declaring nine specific tracks as The Great Walks. No matter that one of them isn’t a walking track at all, but a river journey that must be paddled in a kayak or a canoe – that’s just a detail. All nine are wild multiday experiences and between them they were selected to showcase the terrific range of terrain that New Zealand offers.

Genius. Instantly, these nine routes were placed in a path premier league all on their own. And of course, as soon as you group a collection of challenging adventures under a numerical umbrella, it’s never too long before some idiot – or trio of idiots – will attempt to do them all in a certain symmetrical timeframe.

Nine great walks in nine great days. It seemed like such a good idea when we planned it.

Jagged mountain ranges claw at the belly of a southern sky, leaving long white cloudy scratch marks. Stealthy glaciers and great rippling lakes punctuate the interior, while wild rivers charge headlong towards a curvaceous coastline battered over eons into beautifully irregular shapes by the relentless power of the Pacific. 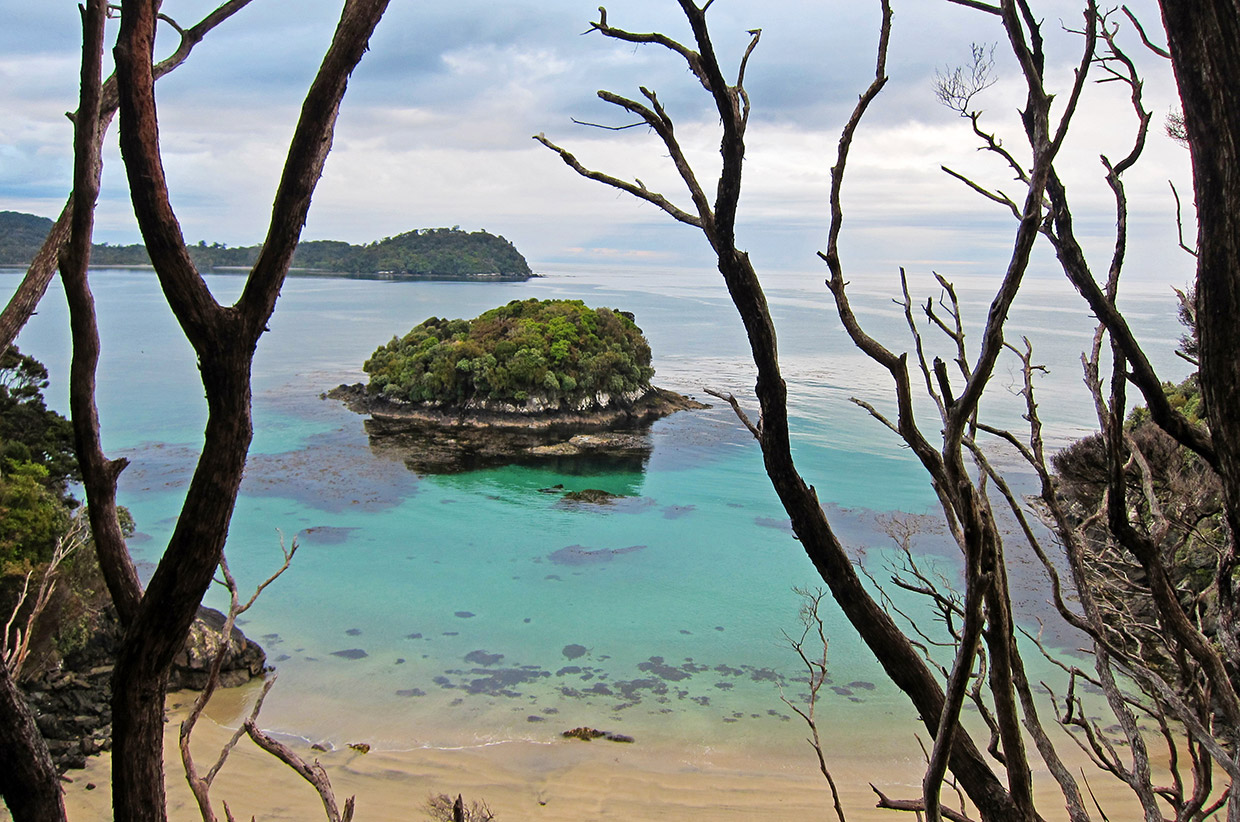 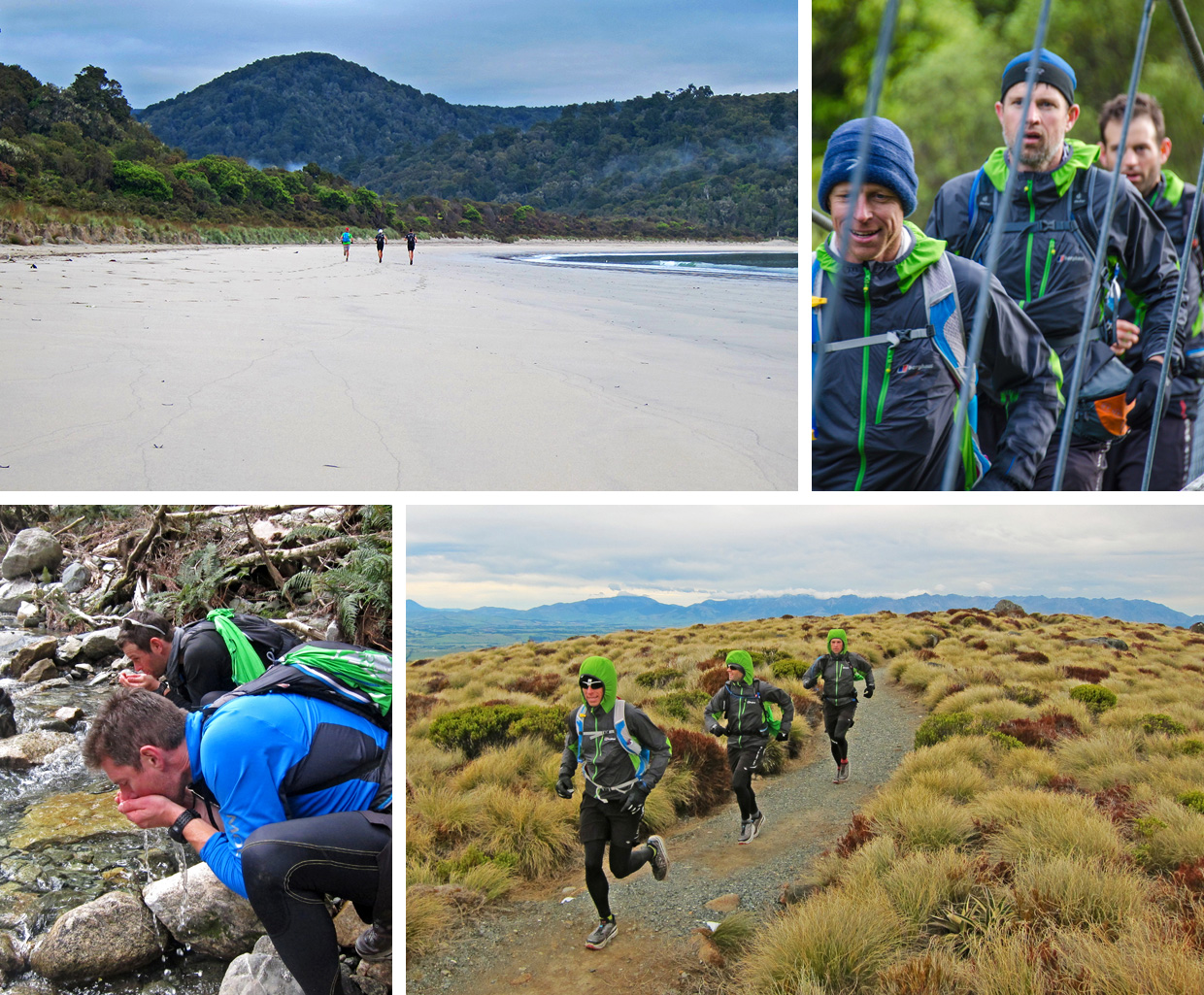 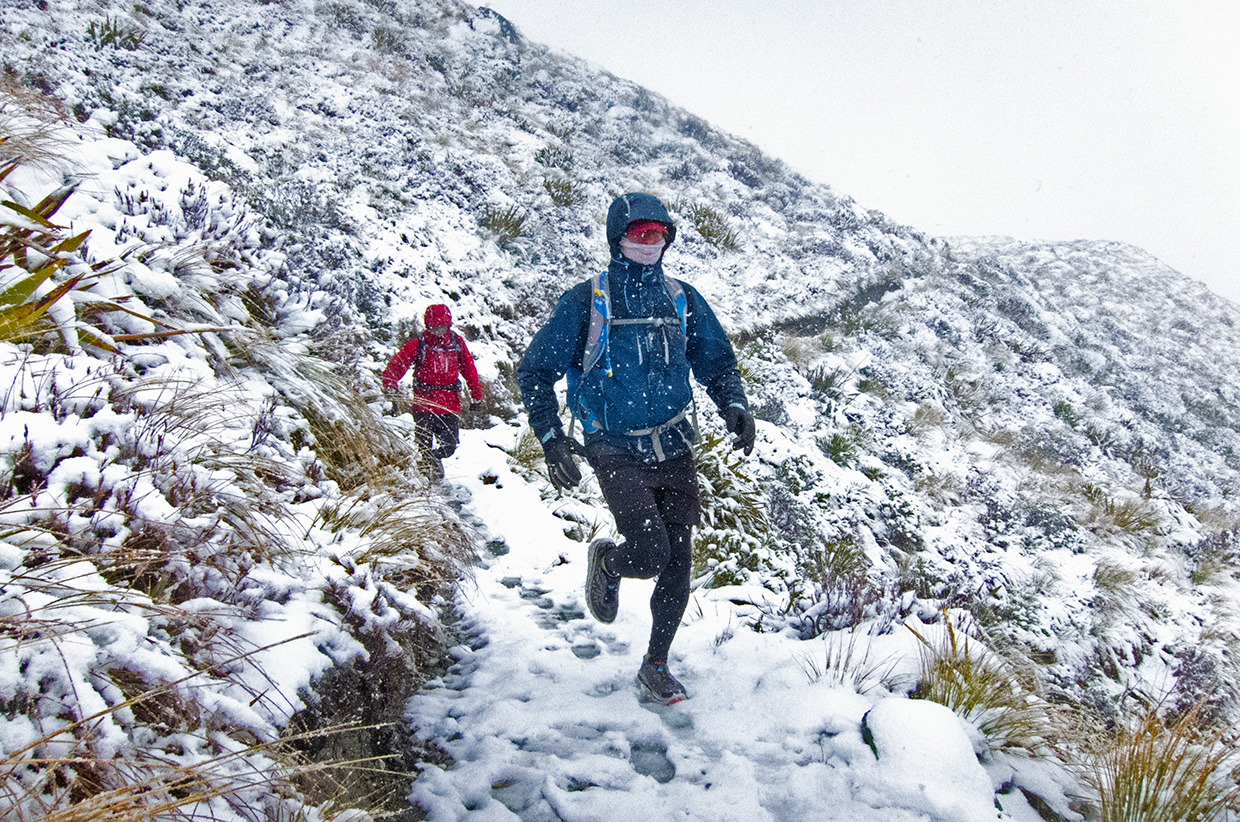 Fiordland was never going to treat us so gently. The magnificence of New Zealand is all here in microcosm, but this is also where the route profiles for the Great Walks begin to bare their teeth. Terrific peaks tower over mighty sounds, and all three trails that wend through the wet wilderness are vulnerable to avalanches, flooding, blizzards, people-flattening winds and other acts of natural violence that could derail our mission at any point.

Stewart Island provided the shallow end for us to ease ourselves into the challenge. This isle, dangling off the southern end of the South Island of this southernmost of countries, is an eccentric little one-pub place, where locals still celebrate the time a sea lion wobbled its way from the beach up to the hotel bar in the main town of Oban.

Everything about the island is tropical, except the weather. But we score near perfect conditions for the 32-kilometre Rakiura Track – the first of our Great Runs and by far the easiest, with minimal elevation, mild temperatures and a benign surface underfoot.

Fiordland was never going to treat us so gently. The magnificence of New Zealand is all here in microcosm, but this is also where the route profiles for the Great Walks begin to bare their teeth. Terrific peaks tower over mighty sounds, and all three trails that wend through the wet wilderness are vulnerable to avalanches, flooding, blizzards, people-flattening winds and other acts of natural violence that could derail our mission at any point.

We get lucky again. The wind howls like a lost banshee on the 60-kilometre Kepler Track, but I only get floored once, and that’s largely through clumsiness. The 54-kilometre Milford Track relentlessly throws great buckets of icy water all over us for hours, but that’s what the original Great Walk is famous for, and the heavenly hydraulics power ferociously beautiful waterfalls that rush at us from all angles. At one point the track is closed because of elevated avalanche risk, and we have to negotiate a steep B-route to get around the danger, but it all adds to the experience.

Rain rapidly turns to sleet and then snow during our canter along the rugged Routeburn Track, and a 32-kilometre short day ended up demanding 8 hours of exertion from our diminishing reserves, but again the landscape drags us through.

Even before my knee exploded, I knew the Heaphy would be the crux of the expedition. Seventy-eight and a half kilometres. That distance had always seemed obscene to me since the moment we’d realised it was too late in the season for us to be able to mountain bike this trail (which is dual use during winter months) and we were going to have to run it. Before this escapade, I’d never run that distance in a whole week – now I had to do it in a day.

A late start caused by a titanic drive from one end of the South Island to the other didn’t help our cause, and once my knee began creaking a quarter of the way into the track, an ordeal of epic proportions loomed like a bad moon. Nightfall sends temperatures plummeting and to avoid losing my running mates to hypothermia I insist they run ahead.

The Heaphy is a wonderful writhing, serpentine trail, but its coils appear infinite towards the end. Fortunately, the only option is to keep going, and while Luke was being stalked by psychopathic sleepmonsters, I’m serenaded by several kiwi birds and that rare experience gives me the boost I need to reach the end.

Tired as I am, I’ll fight anyone who doesn’t agree that the 55.2-kilometre Abel Tasman Track is one of the world’s best coastal trails. Even the discomfort of my rebellious right knee – which, just hours earlier looked like ruling me out of the rest of the expedition – can’t dull the pleasure of the first half of this run.

Ecstasy has a horrible habit of giving way to agony on a mission like this, though, and with a ticking clock snapping at our heels, we have to up the speed in defiance of complaining muscles. We make the last tidal crossing by the skin of our gortex jackets, wading through chest-deep water to get to the other side and run the final 13 kilometres in time to catch the ferry to the North Island with 60 seconds to spare. 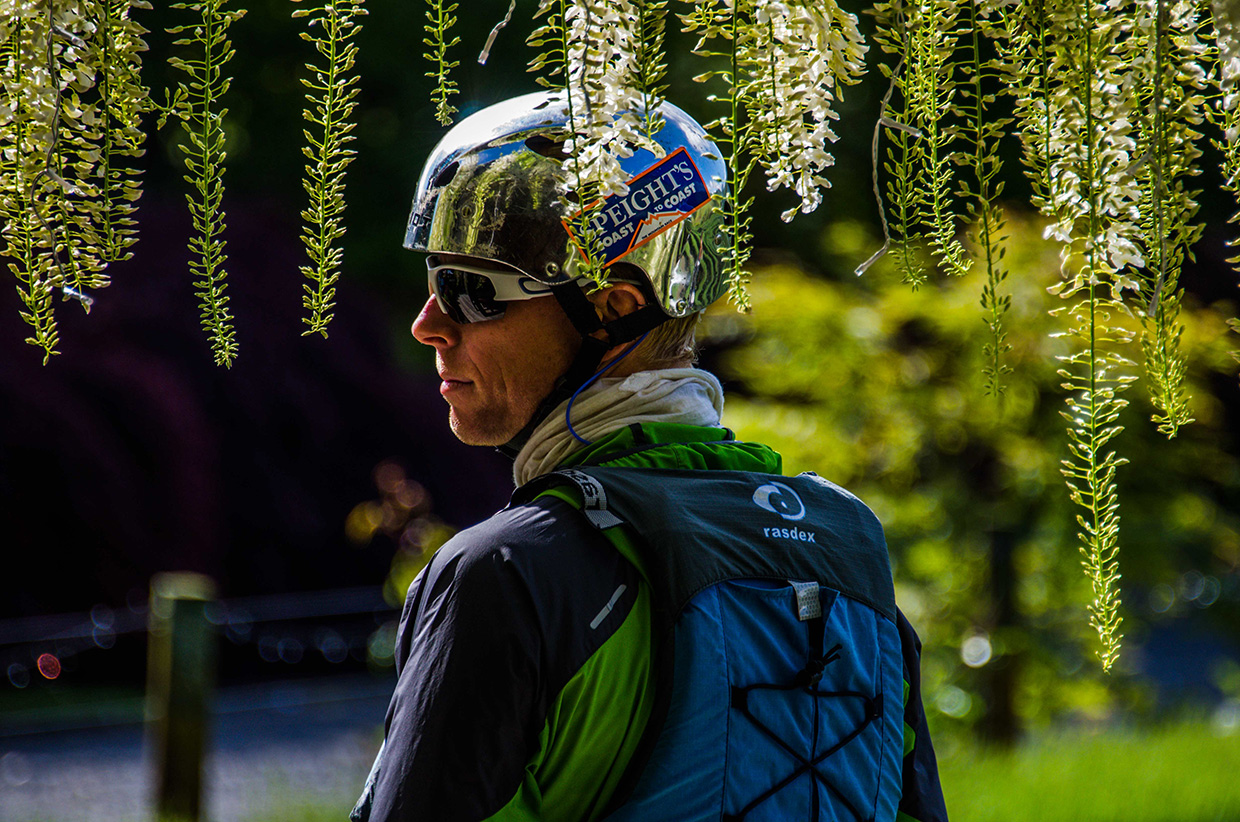 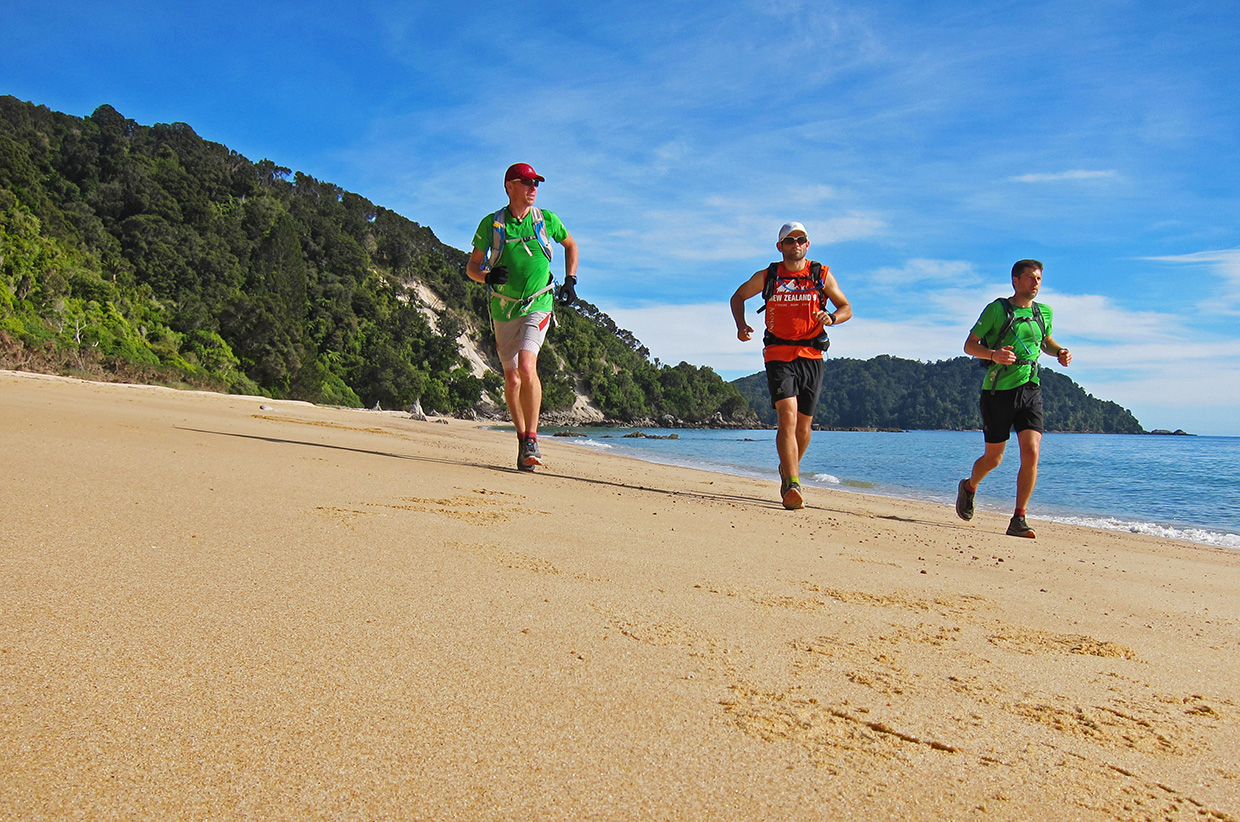 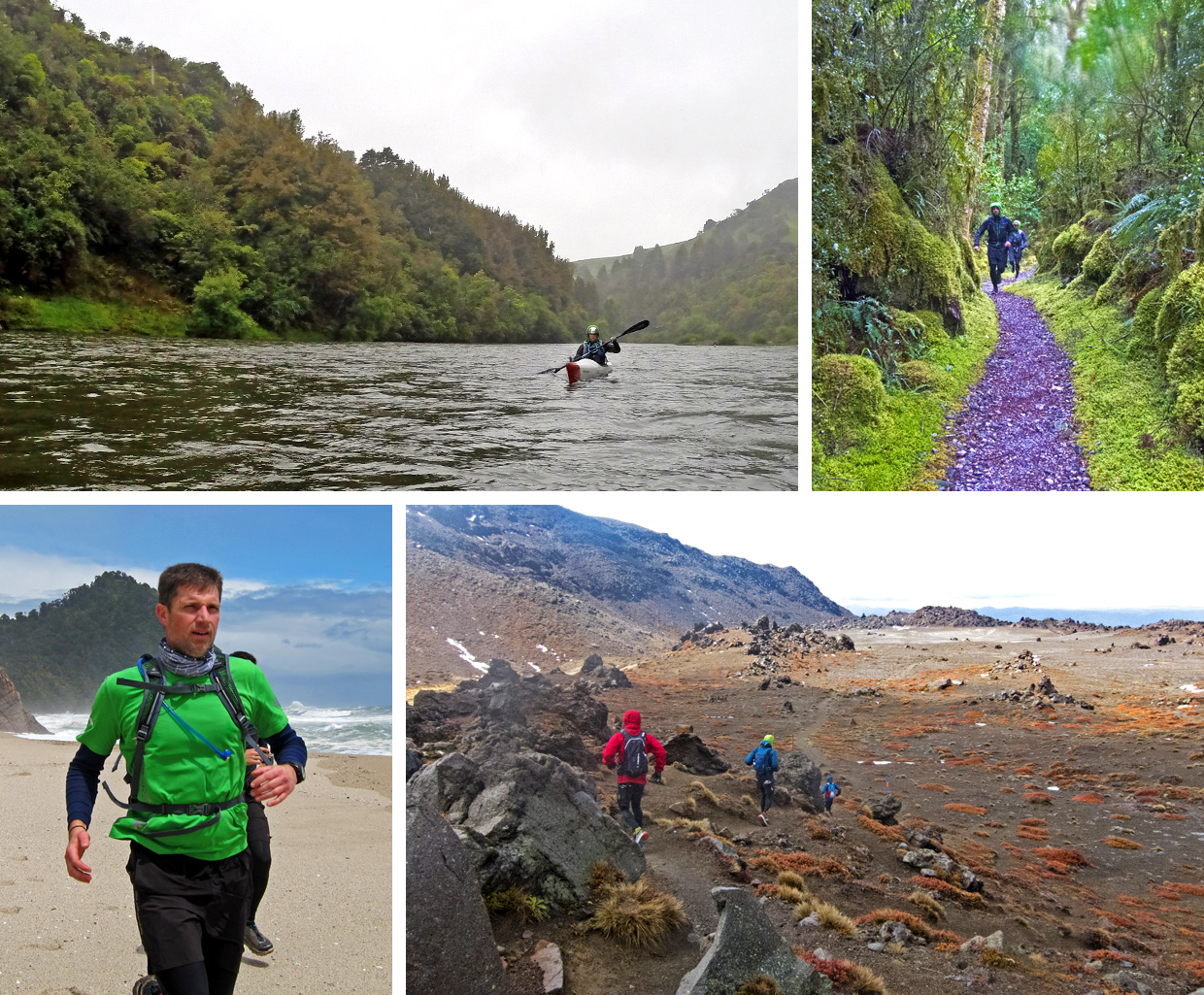 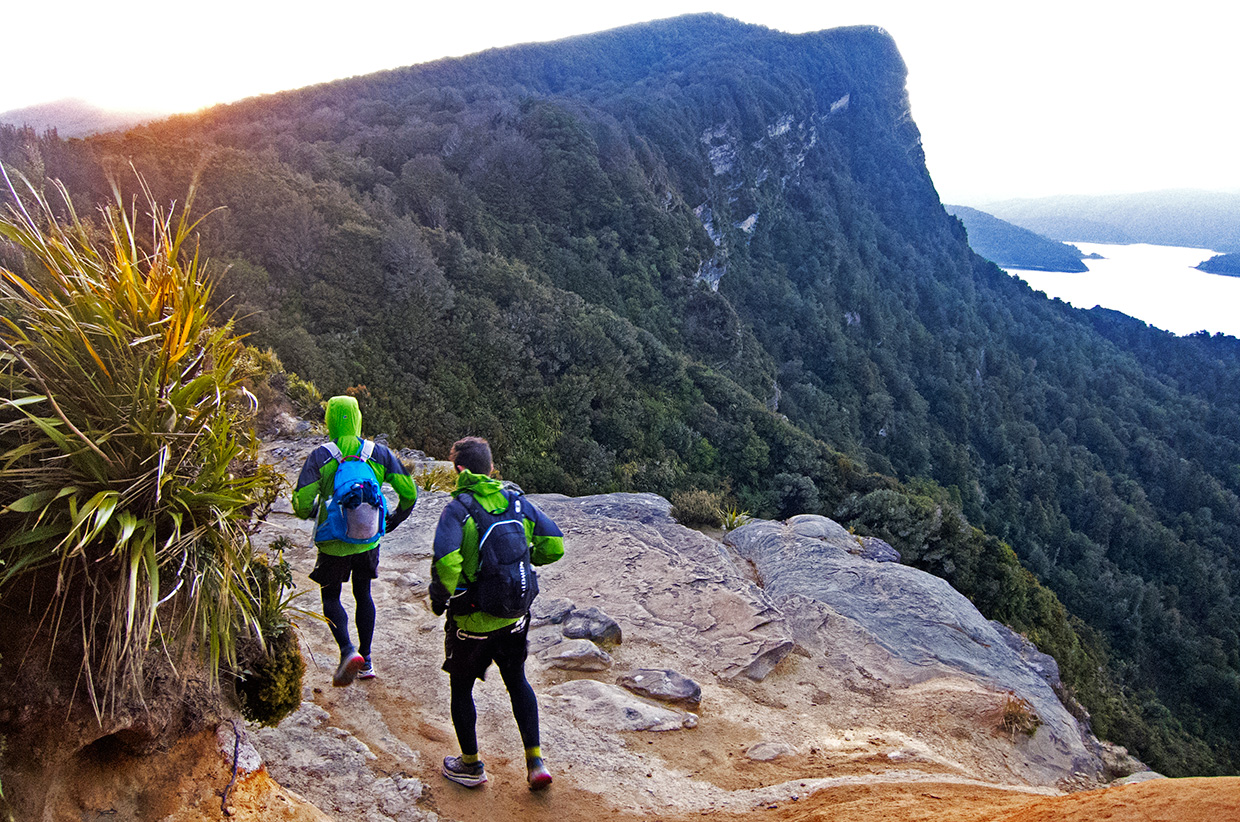 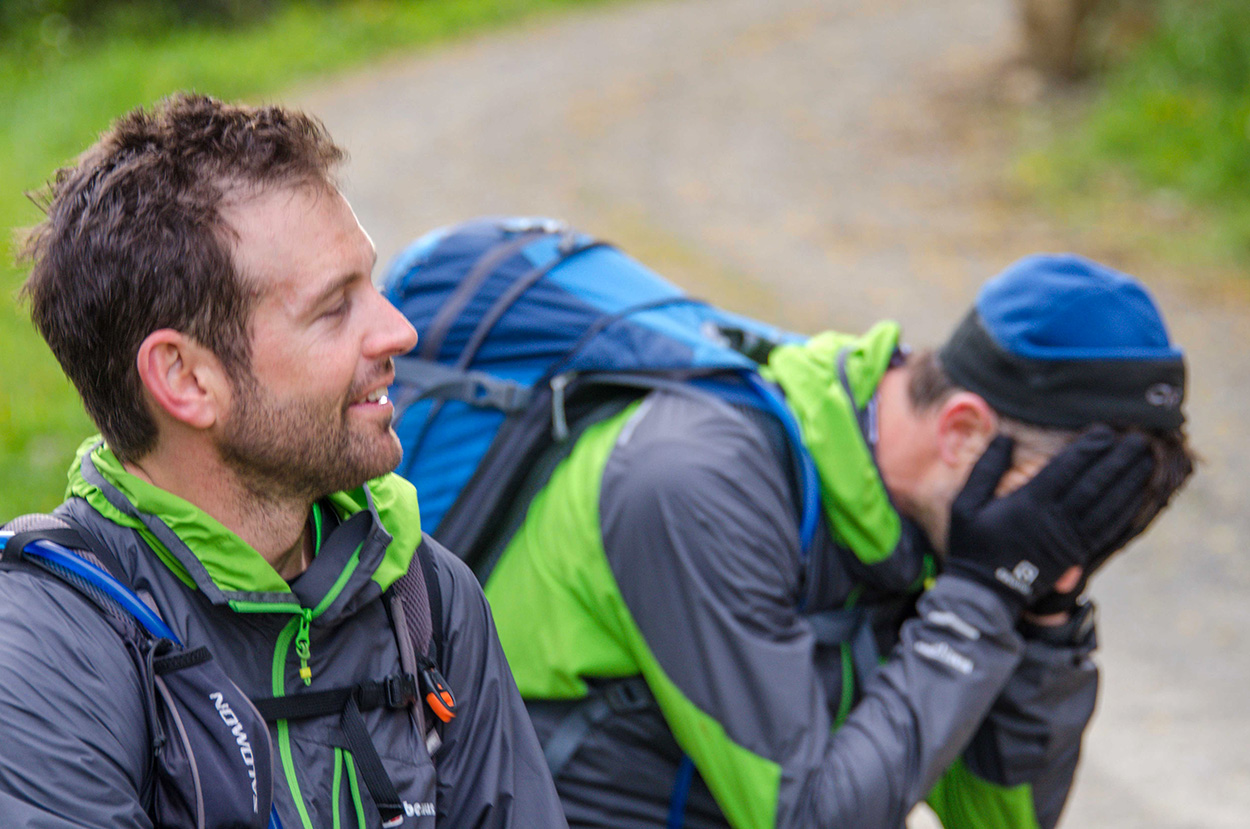 And here the expedition quite literally veers into troubled water. The Whanganui Journey, a 145-kilometre river trail, demands that we swap running shoes for kayaks and paddles. We’ve trained for this, but the water is running unusually high and angry after a recent deluge and, having traded stability for speed in our choice of craft, the feisty rapids begin to bite.

The fifth or sixth time Luke gets bucked from his boat, he resurfaces with the news that he is pulling the pin on the paddle. He’s teetering on the edge of
hypothermia, and we need to get him dry and warm quickly. That done, and a pick up arranged, Ben and I continue briefly, before making the mutual decision to bail and rejoin our comrade. We’ll take on the final two tracks together. This will be a trail running record if it’s going to be a record at all – we can come back and take on the river another time.

After the lush green fecundity of the South Island, the satanic black volcanic landscape on the 43-kilometre Tongariro Northern Circuit delivers a sensory slap to our systems. Rolling on fumes by this stage, it takes a blast from the 80kmph winds on the icy saddle crossing to make me look alive as we round the surreal Green Lake and began the long run back to base.

I swear the trailhead is running away from me for the final 10 kilometres of this track, but when I eventually catch it up there’s little in the way of relief to be enjoyed. The situation is simple: if we want to finish the mission on the ninth day, we have to leave immediately and run the 43-kilometre Lake Waikaremoana Track overnight. Our helicopter awaits.

Soaring over the hinterland of the North Island, I know pain is waiting to welcome me at the other end, but it’s hard to maintain a grimace when you’ve just hitched a ride in a helicopter.

Circling the lake looking for a landing spot, we cop a good eyeful of the path that lies ahead. It looks great in the dying light of the day. Of course it does. We’re not going to see a whole lot of Waikaremoana once the sun dips, but we’ve seen enough to know that the seal of quality placed on these tracks is totally valid.

I’m just glad they capped it at nine – any more greatness would be the death of me.

Pat, Ben and Luke – aka the Global Adventurers – set a new speed record for running New Zealand’s eight land-based Great Walks in nine days, 23 hours and 20 minutes. They plan to go back and complete the ninth track – the Whanganui River Journey – as it should be done: over five days, in a canoe, with beers. A documentary is being produced about their running experiences that will be broadcast later this year.

The Nomadic Kitchen In Search Of An Inner Silence 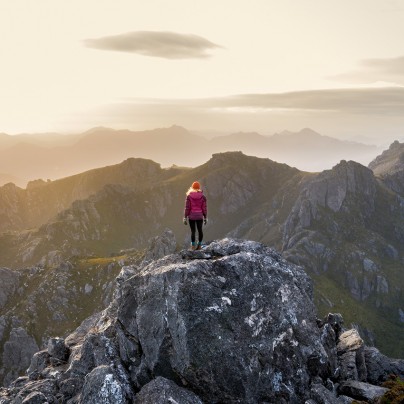