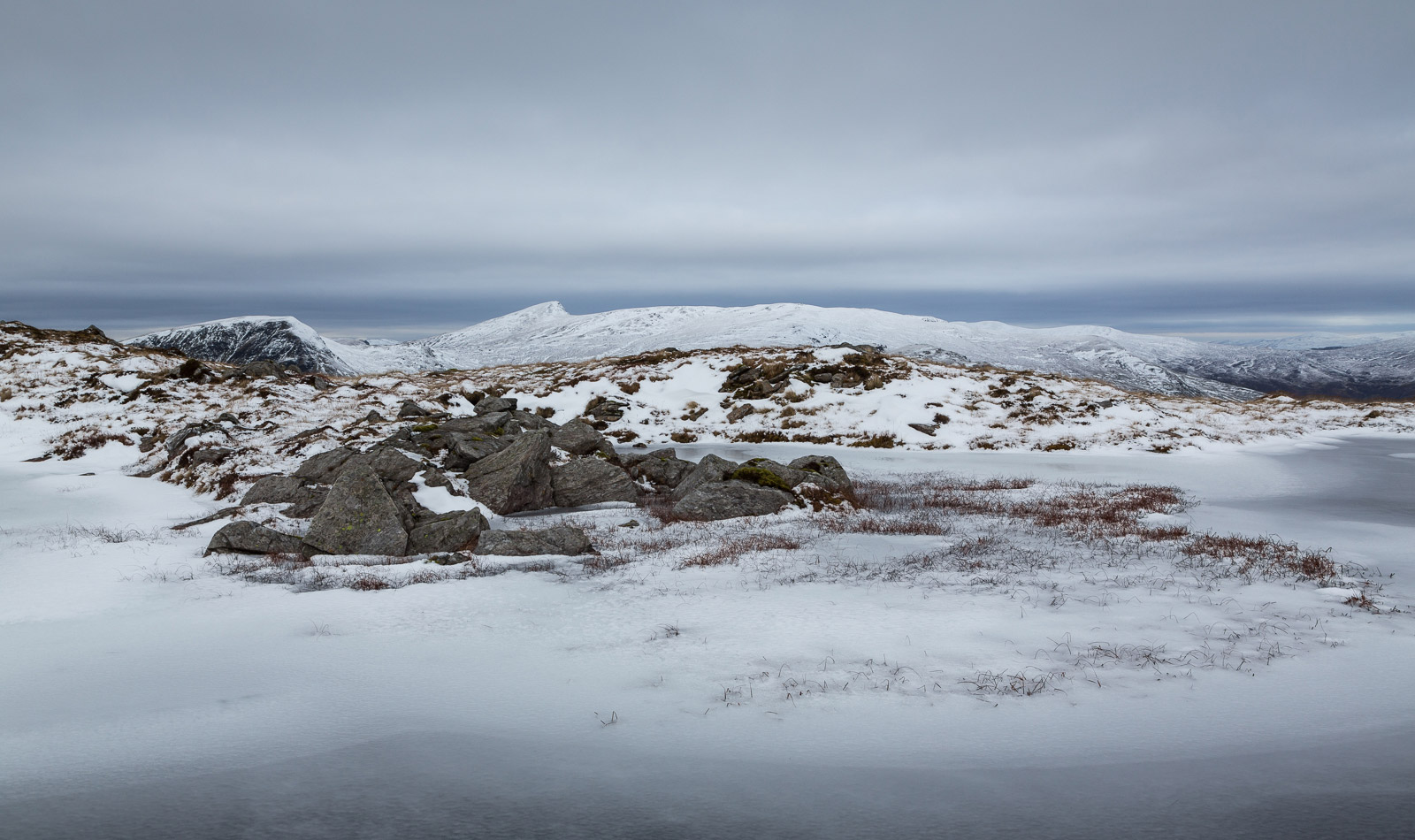 David Lintern heads out on poetic journey into the Scottish Highlands.

I walked in under an early night, handrailing on a small river out from the tiny settlement at the Bridge of Balgie. Balgie lies at the heart of the longest valley in Scotland. Glen Lyon itself is sited in the belly of the highlands and was once a military stronghold for the Picts. The glen seems to flow over with history, yet speaks of an everlasting present.

There’s a bite in the air as I walk alongside the burn and out onto the open moor. On the moor it’s dark. Nothing to challenge the focus on my breathing, and the patchy snow in the halo of my headtorch. I top out onto peat hags under the first Corbett, and the sudden space is almost an agoraphobic shock – I wobble briefly before recalibrating, from two foot ahead to two miles and more. There is no wind, just the polystyrene squeak and cereal crunch of ice pressed down on peat, and the odd deer bolting out of sight as they catch my scent. Then a half foot of breakable crust for half an hour to the top, breathless and crystalline.

I awake long before first light, as the pre dawn winds start to rise. The promised brief high pressure hung over the Ben Lawyers range, a blood chilling and effervescent beginning to the day. I’d camped on top of Cloudberry Hill – Beinn nan Oighreag – and now bitter gusts blasted the mossy summit, scoured and moonlike. Those winds kept rising until the sun burst over the Tarmachan ridge. I stuffed my feet back into frozen trail shoes, packed up fast and headed west.

The morning was a dream of bright white clarity, descending easily into deep drifts down to a glen holding the nests of ruined shielings, long abandoned huts for summer grazing that stretch alongside the old drove road used to move cattle to market. But local facts and fables form a continuum of truths. I read later that some of the stones used for the sheilings were taken from the ruins of a nearby hill fort manned by the Fianna, a band of mythical landless warriors. Who really knows, now that all that time has turned to soup. I stopped to rehydrate and remove some insulation. All was still. Only the icy harmonics of water over rocks at the col point out the silence. 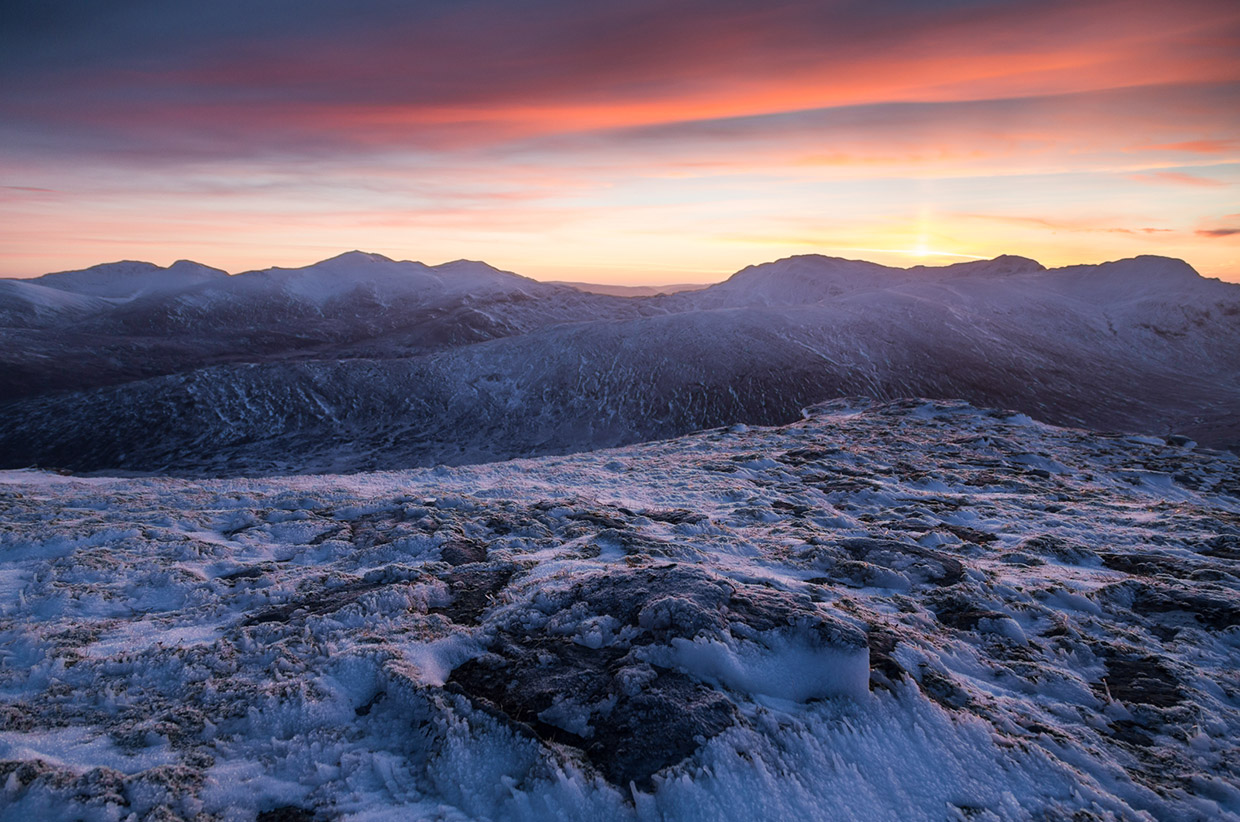 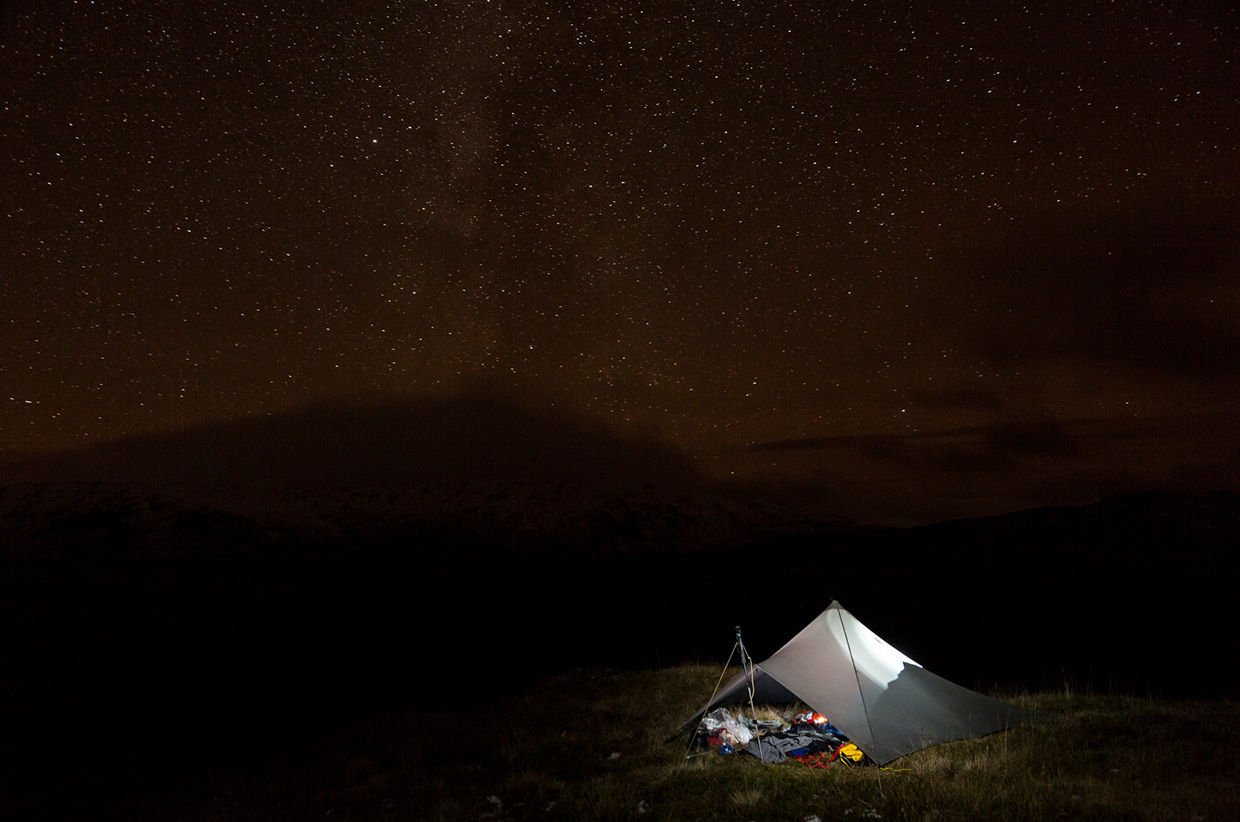 I descended into the western hinterland, down into territory most people won’t bother with, just frozen peat hags and silent erratics left for the hare and the deer. It was a good walk, the kind of walk where folds, creases and hollows seem pregnant with meaning, heavy with themselves.

The wind returned on the approach to the only Munro on the trip, Meall Ghaordaidh, a name which may derive from the Gaelic and mean ‘rounded hill of the shoulder’. I stopped early for lunch on that shoulder. The weather was fast becoming industrial. All the tops were unglamourous on this brief trip, but especially that Munro. Ghaordaidh is described by Irving Butterfield as ‘quite the dullest hill in the southern highlands’, which seemed a little unfair on the ascent, but not once on the summit. As is quite usual in the UK, an Ordnance Survey concrete trig point suffered stoically in the blast.

So I huffed and puffed up through deep, steep drifts to the sastrugi whilst the cloud bombed in from the west, a cold front line over my head, plumes of hurried cloud harrassing each other across a matte sky. Light streaked across the hills to the south, stubby tobacco fingers of burnt amber casting light and shadow on the rest of Scotland’s early, dirty winter – charcoal gray and ocean blue under heavy smokestacks. No clean white alpine adventure here – instead, a northern soul, the cold and damp like black soot under the fingernails and on the tongue. Here, your axe meets mud and rock as well as snow and ice. And for the next few months we’ll grow thirsty for light, so when it comes by May we’ll lift our heads upwards and drink it in.

From here, I descended into the western hinterland, down into territory most people won’t bother with, just frozen peat hags and silent erratics left for the hare and the deer. It was a good walk, the kind of walk where folds, creases and hollows seem pregnant with meaning, heavy with themselves. Whose eyes had seen these glacial stranded stones, down through the years? Glen Lyon seemed to be waiting with baited breath. I contoured, descended, rested, climbed. The wind abated for a while, and the tussocks took it out of me.

Finally, onto Raspberry Hill, the Meall na Subh, which despite it’s cheery title is described by Hamish Brown as ‘a frustrating series of knolls, bogs and detours’ and Chris Townsend as ‘wet and weary’. None of our country’s better known wanderers were giving this unassuming watershed much credit. It’s true there are much grander places, but under snow and ice the soggy peats of summer were made stable by the freeze. These hills were desolate, stone cold quiet. The claylike body of Meall na Subh had been molded into thumbed and fingered hollows, with shelter for camping and a silent, secret steppe-ed plateau under the summit. It was a place unlike any other, a place unto itself. And what more can you ask for?

I got up onto the last of it as the last light left, then went down off as far as I could safely under natural light until I found a tiny flat outcrop with a stream rushing nearby, and an old flat rock ready and waiting as a dinner seat. It had clearly been a campsite before. The second night’s camp was lower and warmer, no ice but no thaw… not until first light. 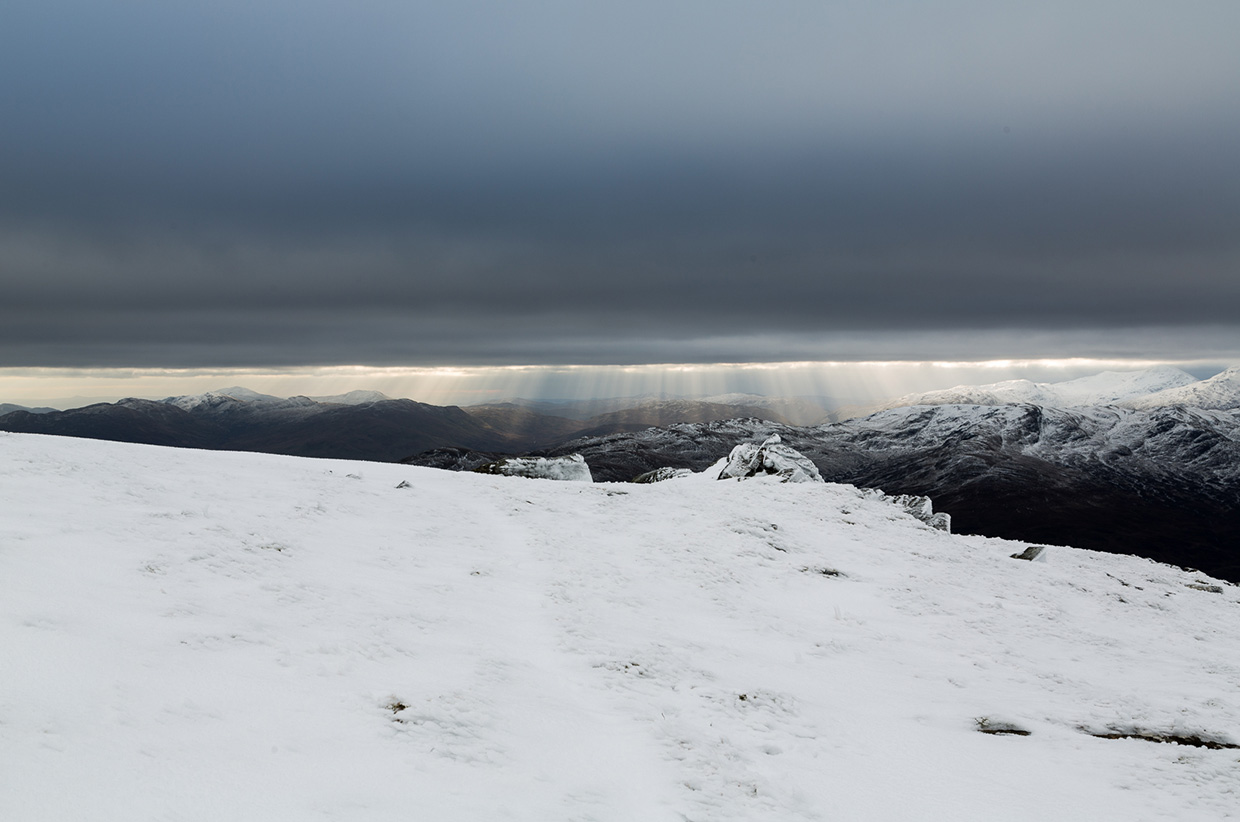 I walked down in the morning into the dreich, faint rain, and set off in my packraft a little down stream from what I thought was the worst of the rapids. There were two kilometres of fast and fluid high water, before a lazy accident, and my first bail. I hadn’t scouted properly. Half submerged, sucking in mouthfuls of icy water and pulled along in a tangle of so-called safety line, I lost my paddle, but thankfully not the boat. Initially I fought it, then remembered to relax and let go, to prevent breaks or sprains. Under I went, into the dark and the cold. In slow motion I dragged myself free of the boat, then free of the water and ran around trying to retrieve my paddle. Chastened and chilled, and to no avail. The water was too deep and too fast to venture in past my waist. I gave up when my core temperature dropped too low and my teeth rattled too hard. It wasn’t safe to tempt fate still further. Thank god for dry bags and primaloft clothing. Still cursing my stupidity, I kicked the river grit out of my trainers and started walking down the single track road towards the second dam.

I recognised Donny Sinclair in a flash – Jamie Grant’s photo of Donny nursing a dram of whisky had struck me deep, and wouldn’t let go. I’d met the photographer only a few days’ before at a talk about his book on the glen. And now Donny had conjured himself from the landscape, a physical reality from black and white myth. He told me he lived high up in the glen for 25 years or more as head keeper on the estate. After he retired, the Laird had let him stay on in the house. He would have use of the house until he died, he said. He was appropriately grateful.

Donny was driving a vehicle, I later found out, known in the glen as the Blue Menace. I sat there in my wet underwear whilst he quizzed me on Scottish Independence. Old cigarette ash wafted around on the dashboard as we leaned into the corners. I watched the river sail past in his wing mirror. It’d be a perfect packraft loop for those with the skills and the patience to portage the dams and navigate Class 3 or 4 rock gardens, the weirs and waterfalls. I, on the other hand, would have lost my paddle many times over, and probably my boat and my brains too. A fine line between stupid and clever, and never more true than outdoors.

Meeting Donny had redeemed the day. Brief connections like this are how I know I’m still in the right place after two years. Back at the bridge the Blue Menace sped away, with Donny still hunched over the wheel, still leaning into the corners. Then I got back to my own ancient car, which refused to start, and I felt less sure of myself again. I remembered my close call with the river, and knew I’d been granted leave I really didn’t deserve. Much later in Aberfeldy, a café owner gave me a cup of tea before he closed, and I stood on the village green and watched the crows take flight for the last of the sunset. I felt a little more alive again. You see, I think it’s important to say, I’ve been lucky. Scotland keeps asking me back, and back again, but it’s no place for bloody tourists.

David Lintern is a photographer and writer focusing on human powered travel, landscape and environment. He’s gone from getting stuck in quicksand in a farmer’s field in Wrexham as a youngster, nightly wanders around an abandoned brick-works in Croydon as a teenager, to getting lost in many of the pointy bits of the UK and Europe as an adult. He splits his time between editorial, commissions and developing his own projects, and working for a conservation organisation in Edinburgh.