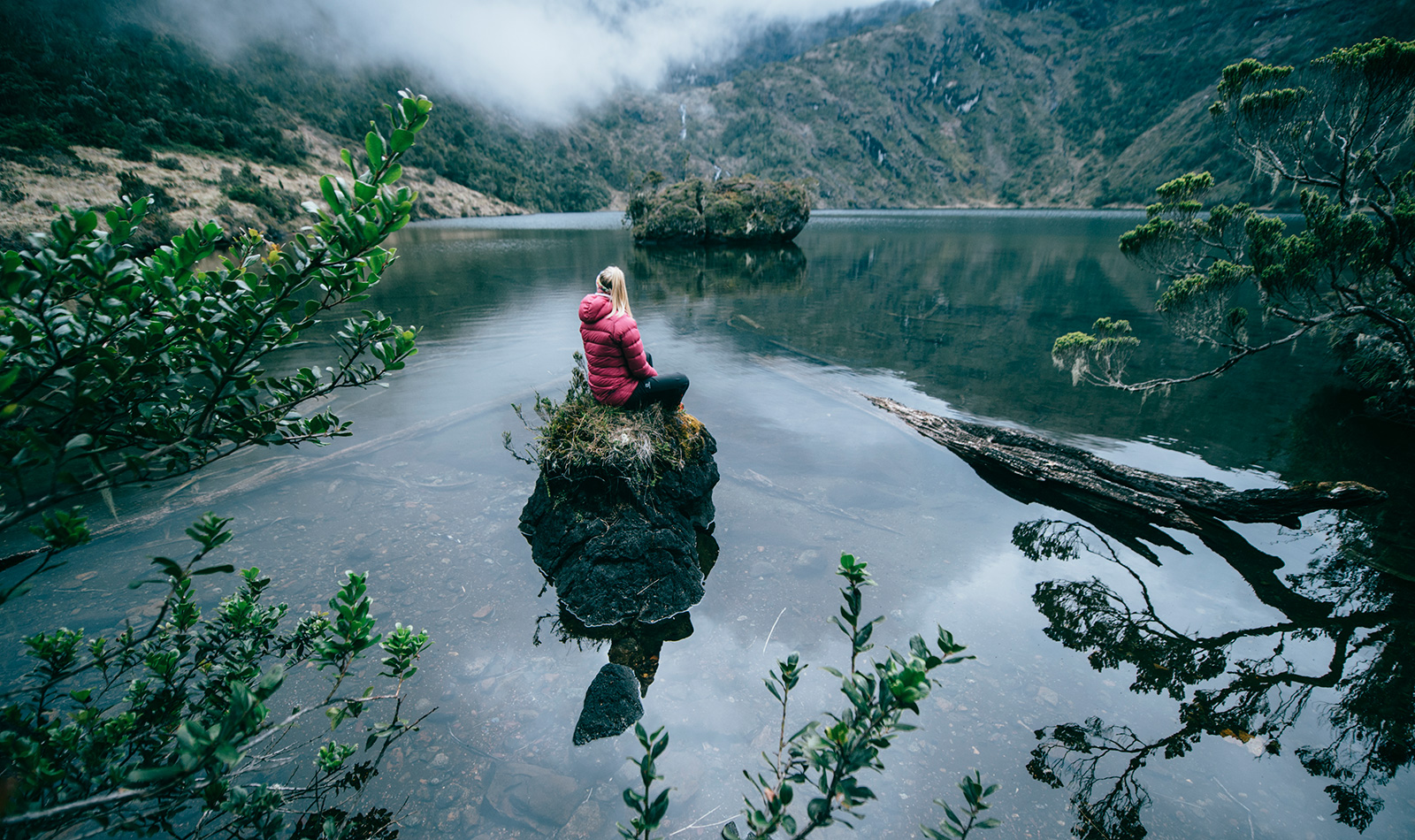 In Sidetracked Volume Seven, Anna Frost tells her story of returning, with only fragmented memories, to Papua New Guinea – nearly 3 decades after her family had left – to run and explore the Highlands. Dean Leslie followed her journey.

Anna Frost, or ‘Frosty’, is an instantly recognisable face to anyone who follows the small world of trail and ultrarunning. The athlete has a friendly smile, an infectious enthusiasm and an incredible winning record. It is, therefore, disarming to see her break down on camera. Fat tears run down her face as she describes the last couple of years of her life. Sitting in her parents’ house in Dunedin, she opens her heart and speaks with honesty and openness. There is no gloss, no sentimentality, just a private moment, shared.

Smaller, lighter cameras have made filming outdoor sports infinitely more accessible, while YouTube, Vimeo and social media have revolutionised our ability to watch and share them. Barely a day goes by without another glossy, ultra-hi-definition ‘edit’ being released. We are richer for this. These films inspire and excite – they are windows into worlds that we can’t always reach, due to the limitations of work, geography and time, or perhaps just fitness and athletic ability. By offering these glimpses into adventure, they have inherent value; but in a disposable world, few endure in our memories beyond the next film to be released. It is easy to treat this viewing as the metaphorical eye-candy that it is. We all like sweets, but when something with more substance comes along, it has the power to tell a greater story and influence lives beyond five minutes of adrenaline. It is these stories that truly resonate and inspire, as they have done since they were told around campfires rather than glowing tablet screens.

Back on screen, there’s a moment when Frosty looks across to someone off camera, Dean Leslie, the filmmaker, and reassures him that she’s OK to continue. A second of film paints a picture of mutual trust and respect. They’d met on his first job for Salomon back in 2011, in the Blue Mountains of Australia. As he did more work with the company, directing and producing many of their Salomon Running TV episodes, it was inevitable that they would work regularly together, building trust and friendship as they did so. The role of a filmmaker may be to observe and record, but the nature of outdoor filmmaking brings the whole crew into the team. It’s this team relationship which made Frosty so willing to share her story to a wider audience. She knew Dean and knew that he would portray her with sympathy, kindness and balance.

The role of a filmmaker may be to observe and record, but the nature of outdoor filmmaking brings the whole crew into the team. 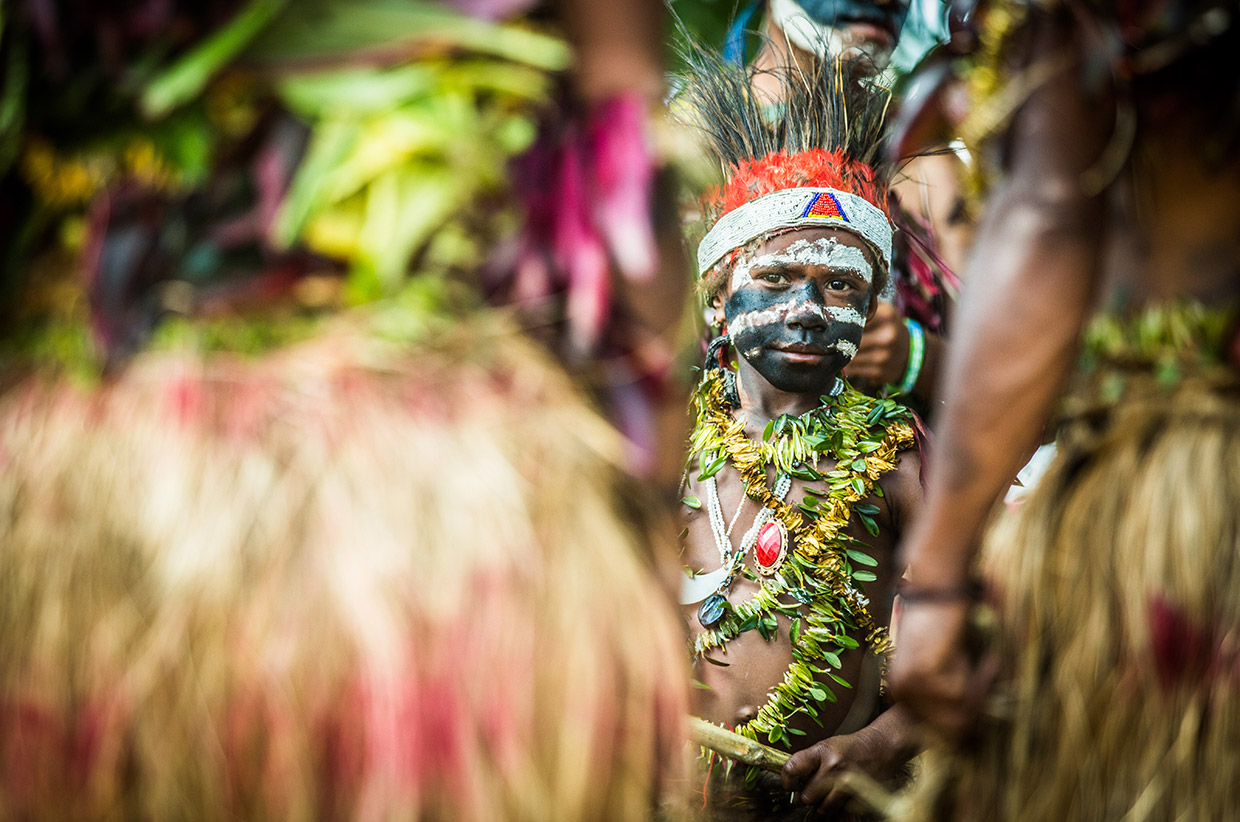 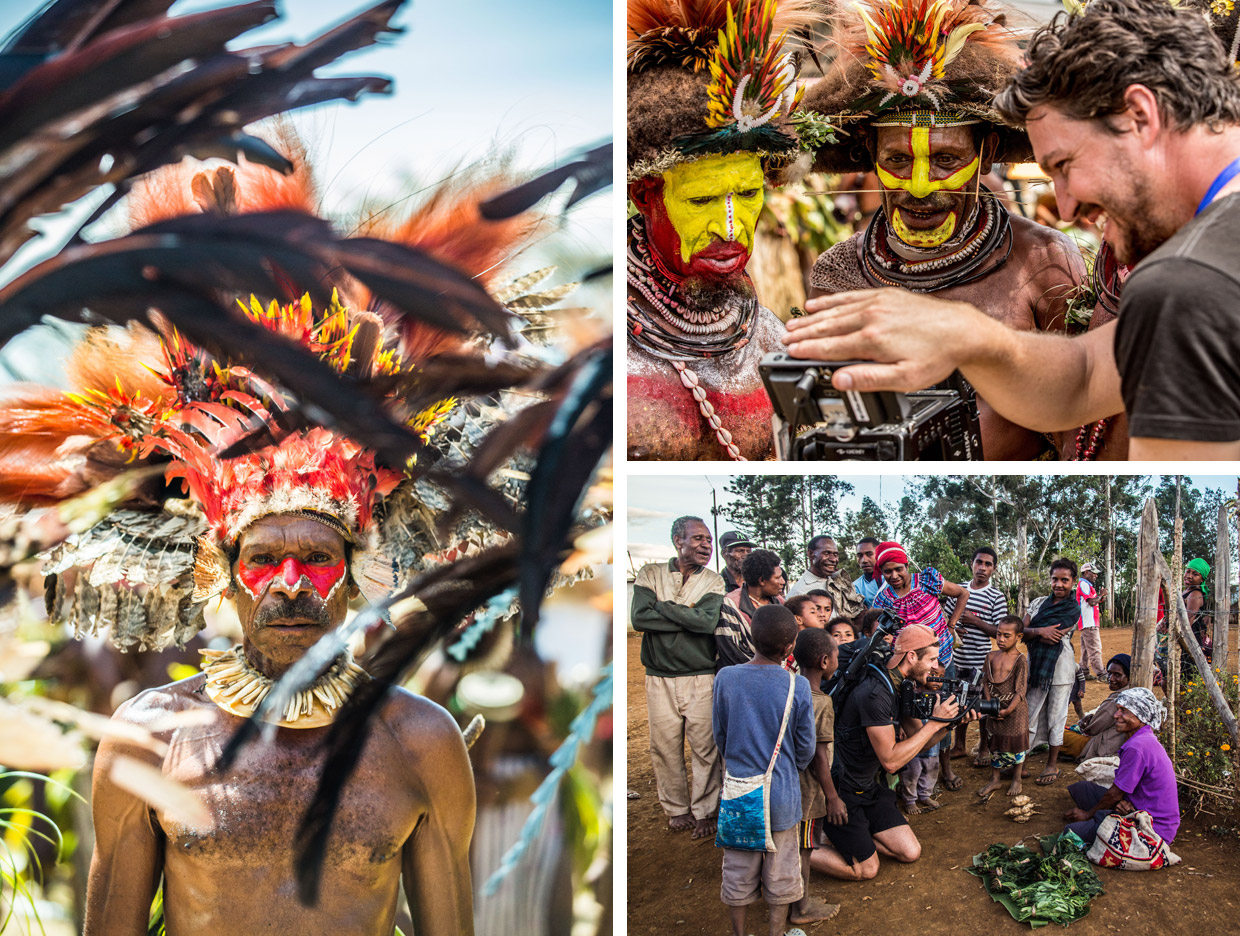 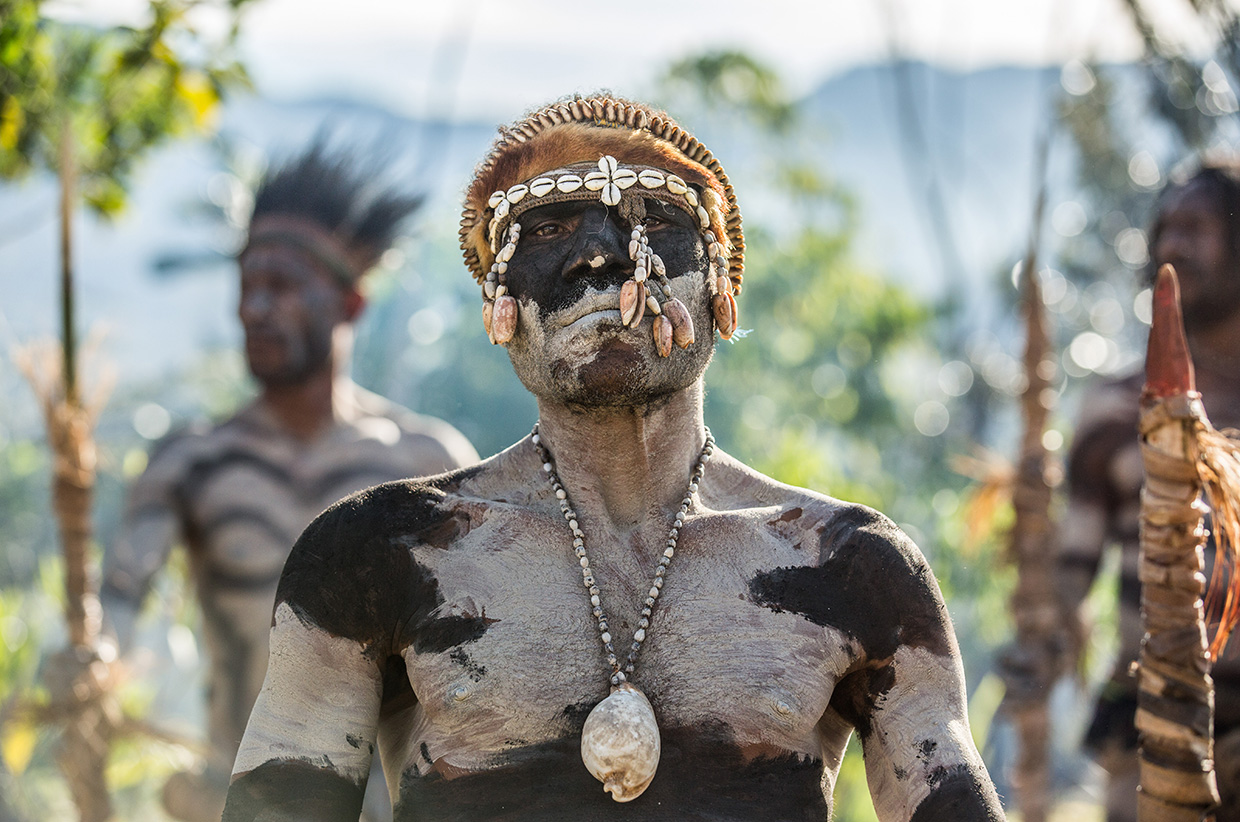 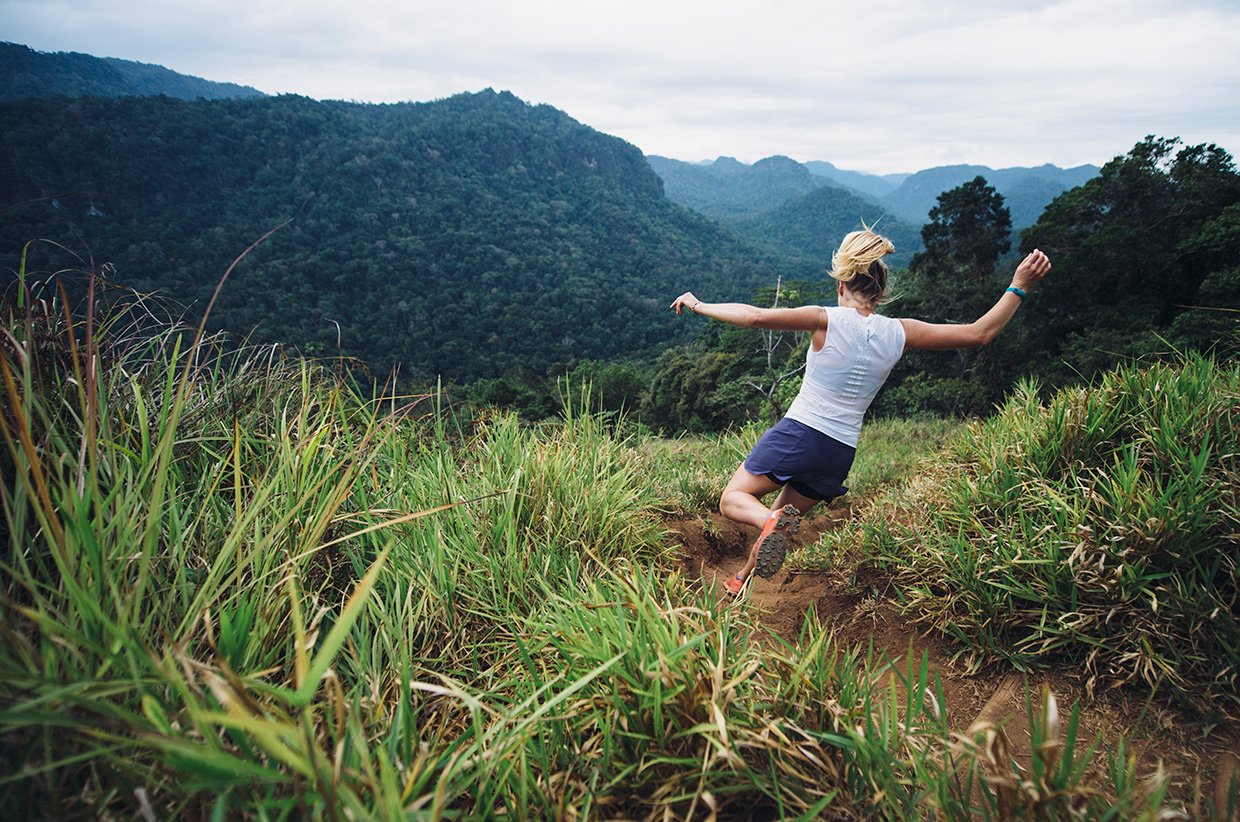 Frosty had taken the first steps of a journey more challenging than any ultramarathon; she had found direction and been able to put running into context, find greater balance in life and feel more rooted.

Time has passed since he filmed Home in Dunedin with Anna. It never felt like the end of the story, though. ‘I felt like Home was a brutal and honest confession,’ Leslie says, ‘but there wasn’t any resolve other than a sense of determination from Frosty. I wanted to tell the rest of the story as it was playing out.’

Frosty had taken the first steps of a journey more challenging than any ultramarathon; she had found direction and been able to put running into context, find greater balance in life and feel more rooted. What wasn’t clear was where she would go next, both physically and mentally. But, while they were filming in Dunedin, a single photo gave them both inspiration for where the journey may lead next.

Dean describes the moment. ‘While we were filming we were going through her old family photos and Frosty pulled this old faded picture of a tiny little blond girl standing in a field with a Papua New Guinean in traditional tribal dress. She started telling me how she grew up there and had always dreamed of going back. That’s when the seed was planted. We started chatting about it and how Frosty really wanted to go back.’ And so the story continued.

Dean had a clear idea of what he wanted to achieve with the next film, how it should feel, and the story it would tell – and as Frosty found out herself, it wasn’t about the running.

‘I think the core message of Frosty’s story is that running is just running, just an act of moving. Something that you do does not need to define who you are. We are all so quick to label people. To put them in a nice little defined box. Most of what you look back on and remember are little moments and experiences, sometimes just fleeting glimpses of something that lasts a few seconds. Our lives are shaped and driven by a collection of these moments and I wanted the film to represent those experiences through Frosty’s trip to Papua New Guinea. The film isn’t about the trip. It is just a part of her story that we used as a backbone to the film’s structure – and, like Frosty’s life, running is there, it is a constant, but it isn’t everything and certainly isn’t central to who she is.’

Frosty stands in front of her old childhood home in Papua New Guinea. It took some finding, teasing at half-memories of a lifetime ago. Once again she is speaking to the camera. She recounts the same emotions, the same story that she told nearly two years previously, but there is greater resolution in her voice, a strength and confidence that was painfully lacking before. Her eyes are smiling as she speaks and there is an inherent sense that things are going to be OK. 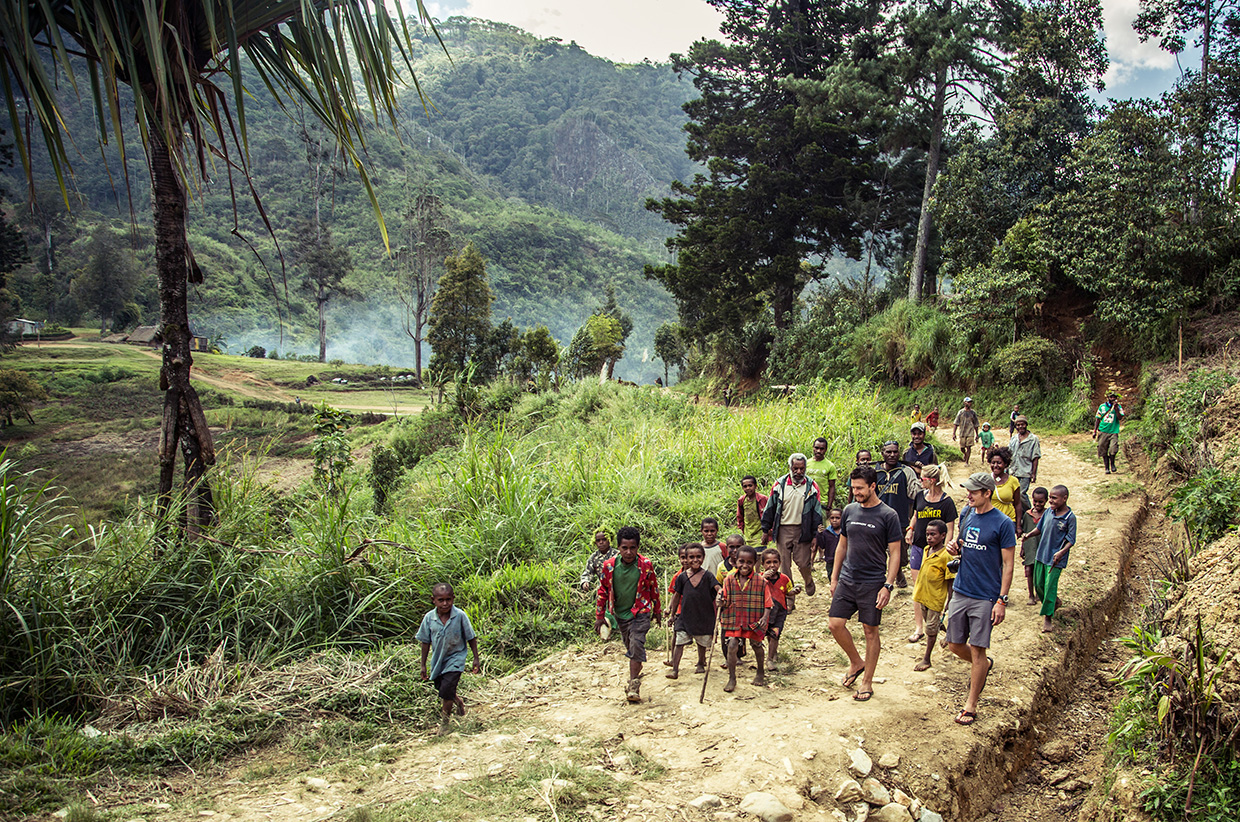 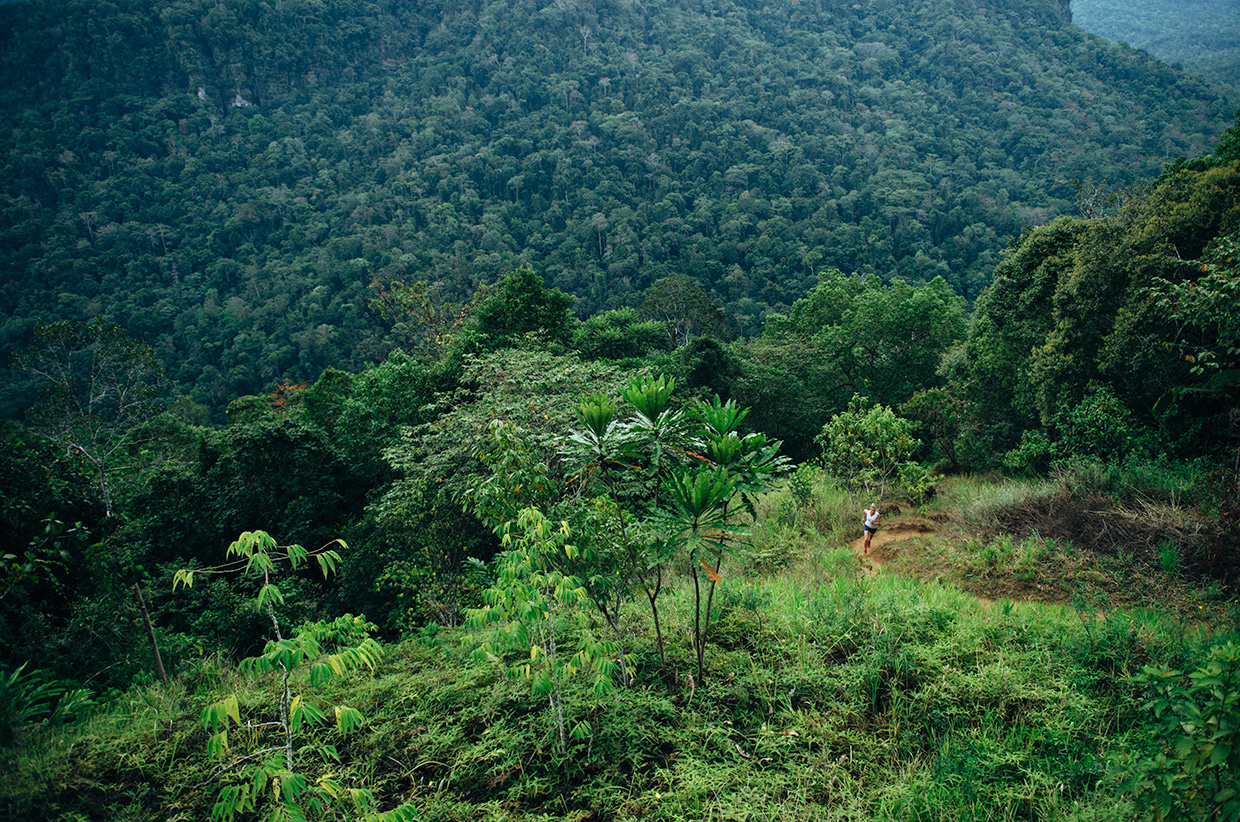 Running is once again the positive influence that it should be. A route to exploration and travelling, a mode of travel in itself. Papua New Guinea is not like the vast majority of places on the trail racing circuit. There is little infrastructure or even information about what running there is on the island. It is both geographically and culturally ‘out there’ for the team. ‘Something about PNG was fascinating and intimidating at the same time. You would walk down the street and there would be these big burly islanders staring right at you, they wouldn’t take their eyes off you, you know? They would walk straight for you and leave you thinking “Oh shit this is it” and then feebly try to force a smile as a last contingency, when suddenly this huge guy’s face would just break into the biggest smile. It transformed him into the most welcoming person you have ever met. It was just an all-round bizarre experience and very heartening and welcoming for the most part. But it was also unsettling at times. I felt like there was no middle ground at all. It was either all love and hugs or mass panic, shouting and punch-ups. It was brutal and beautiful and full of contradictions. Truly a fascinating country.’

In a country that looks and feels starkly different to our western eyes, one person appears at home and comfortable there. Frosty seems just as at home navigating the pounding, dizzying vibrancy of the Goroka festival as she does running through heavily vegetated jungles and alpine mountain country. Climbing Mt Wilhelm, the team are accompanied by the Wandike Clan, who effectively own the land on which it stands. ‘It was amazing to learn about that and see how well the clan system was working. There is a strong sense of community and brotherhood. All our guides were from the same clan,’ Dean says. Maybe filmmaker, team and runner are part of a clan too. They have shared the journey together, and each play their part in telling this chapter.

And with that, a little more of the story is told. It still isn’t the end, and leaves just as many loose ends unresolved. But this is about life, not just running. It doesn’t finish with a ribbon across the track and a medal. Like Frosty and Dean, we all keep moving and keep writing our own next chapters.

In a country that looks and feels starkly different to our western eyes, one person appears at home and comfortable there. Frosty seems just as at home navigating the pounding, dizzying vibrancy of the Goroka festival as she does running through heavily vegetated jungles and alpine mountain country. 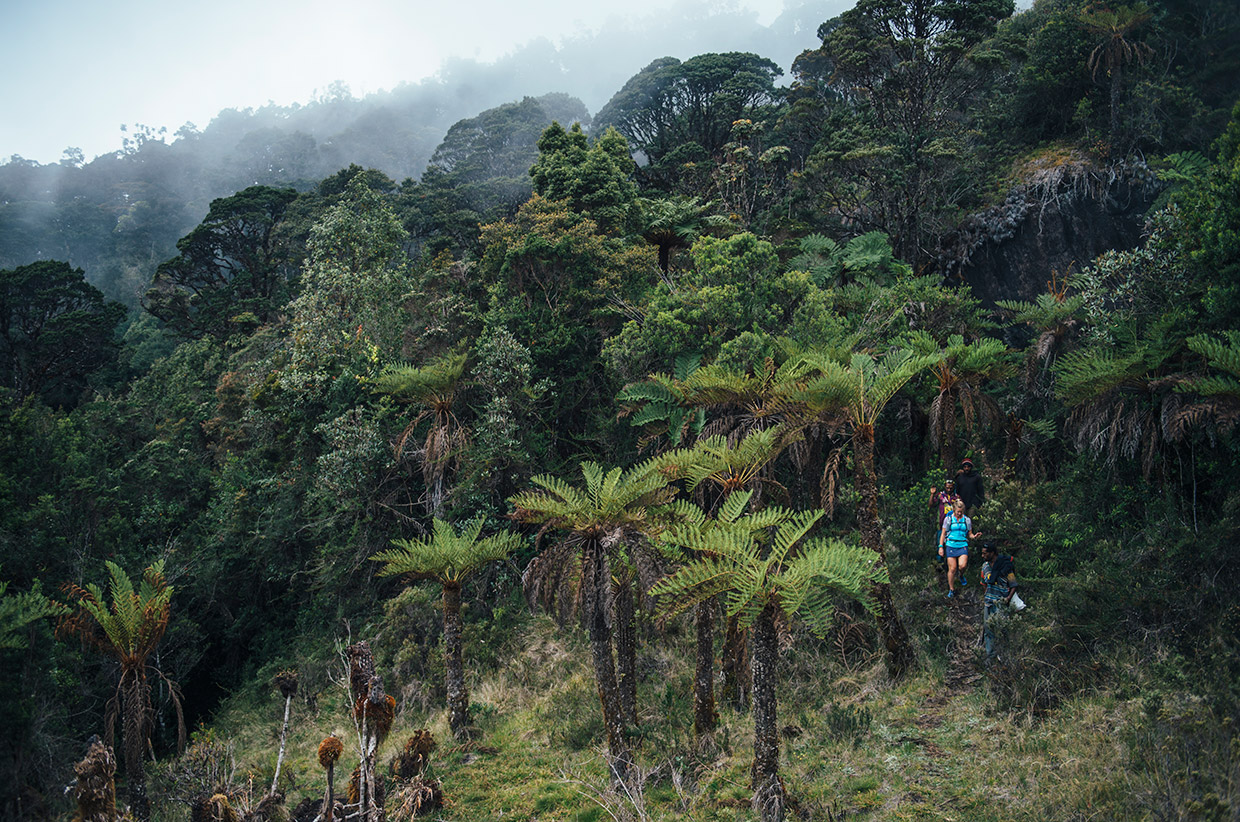 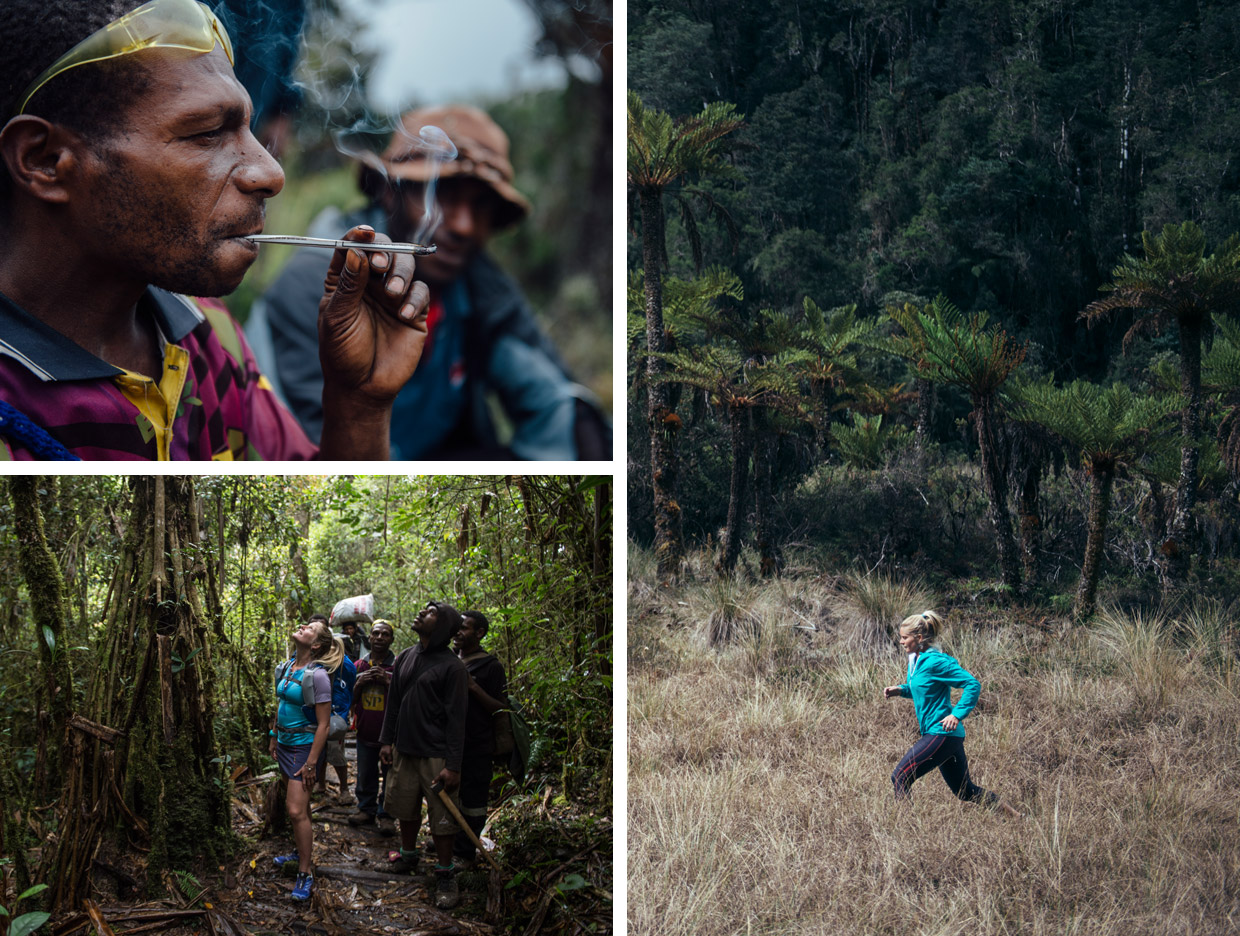 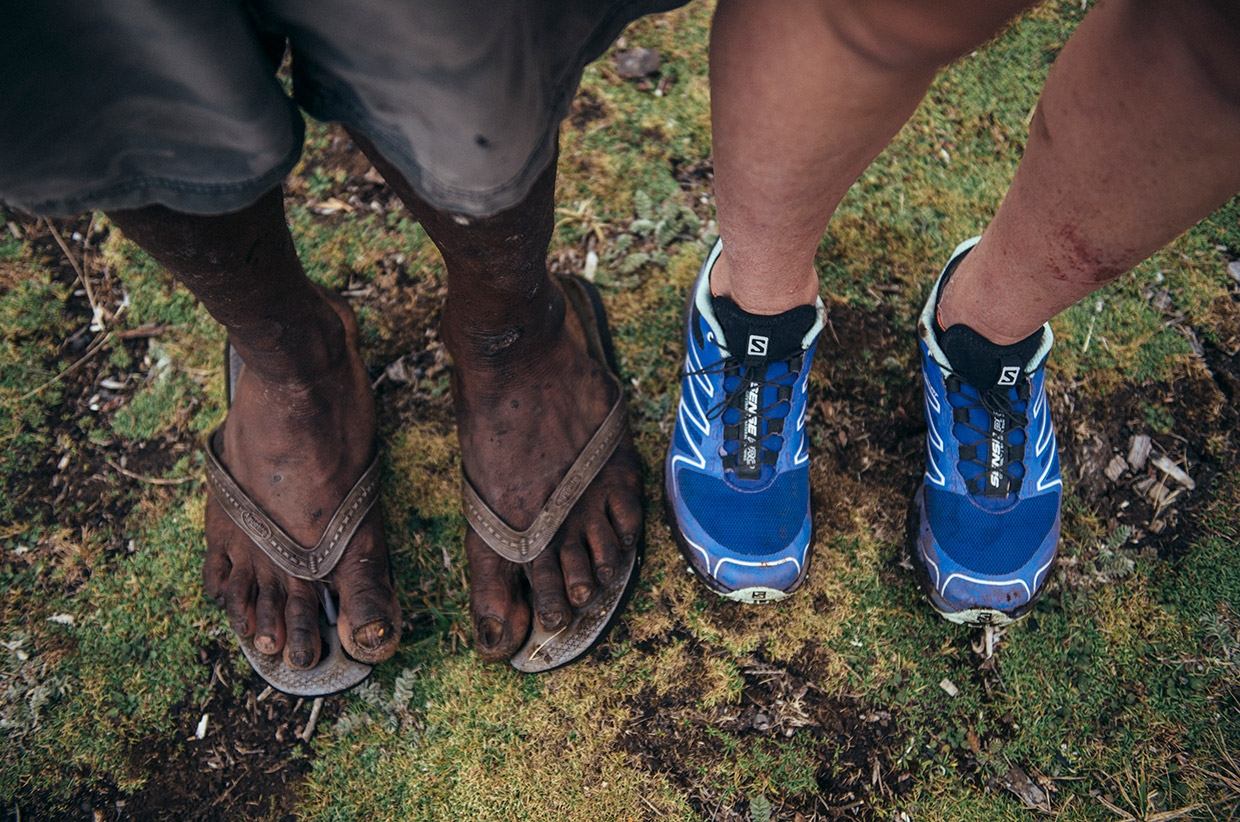 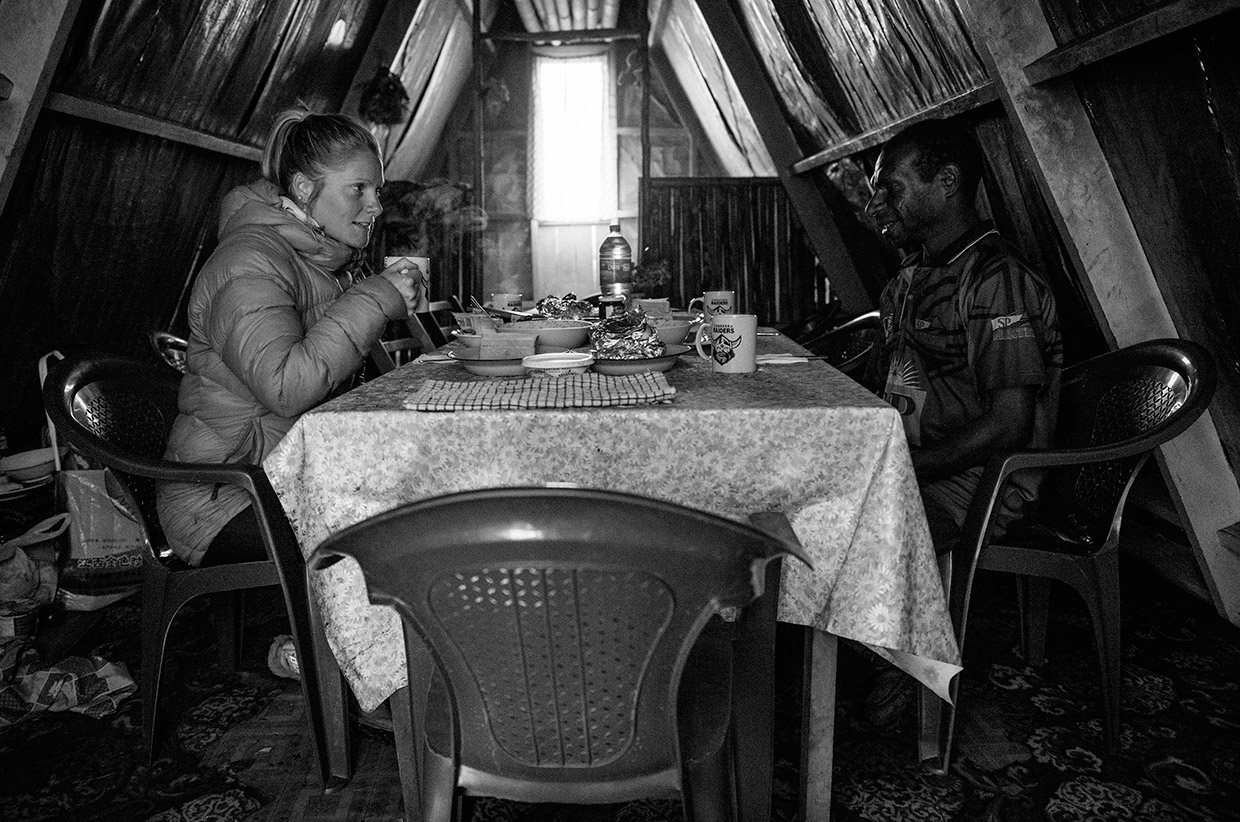 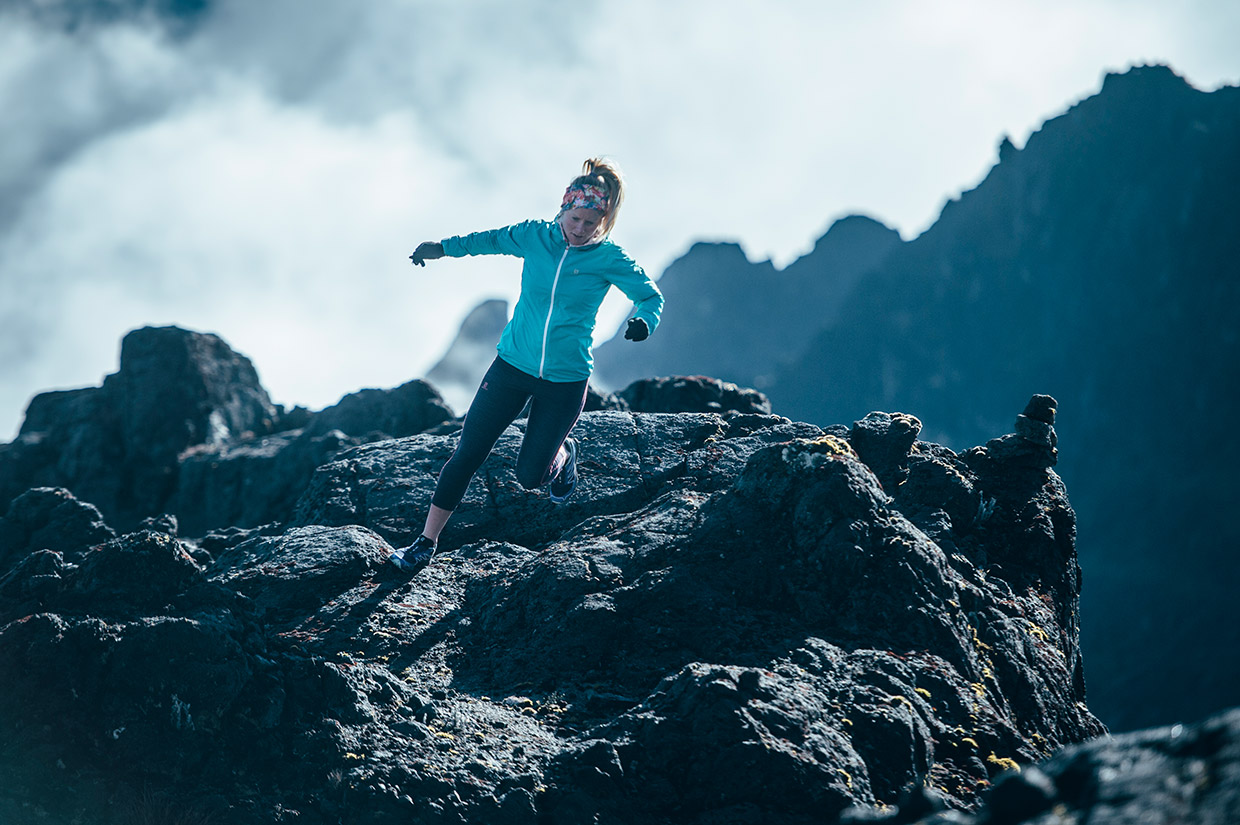 Dean Leslie is a South African creative who’s film and photographic works fall under the Wandering Fever brand. He is also the founder and owner of the successful independent film production company, The African Attachment.

He has filmed on all seven continents, from the remote islands of Antarctica to the windswept dunes of the Namib. His work has a distinctive visual style with a strong narrative element that is layered with subtle themes and tones.

Mountain Of The Spirit The Siren Song of the Britannic 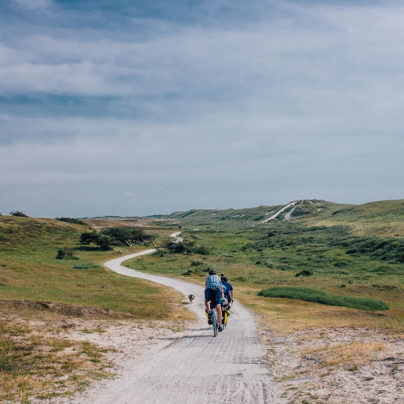 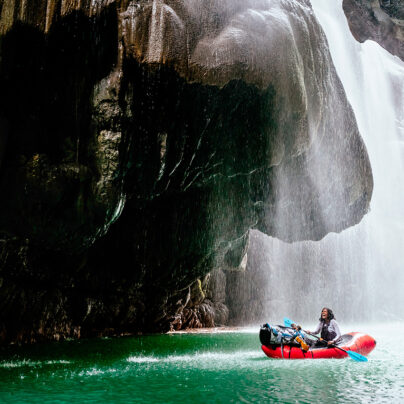