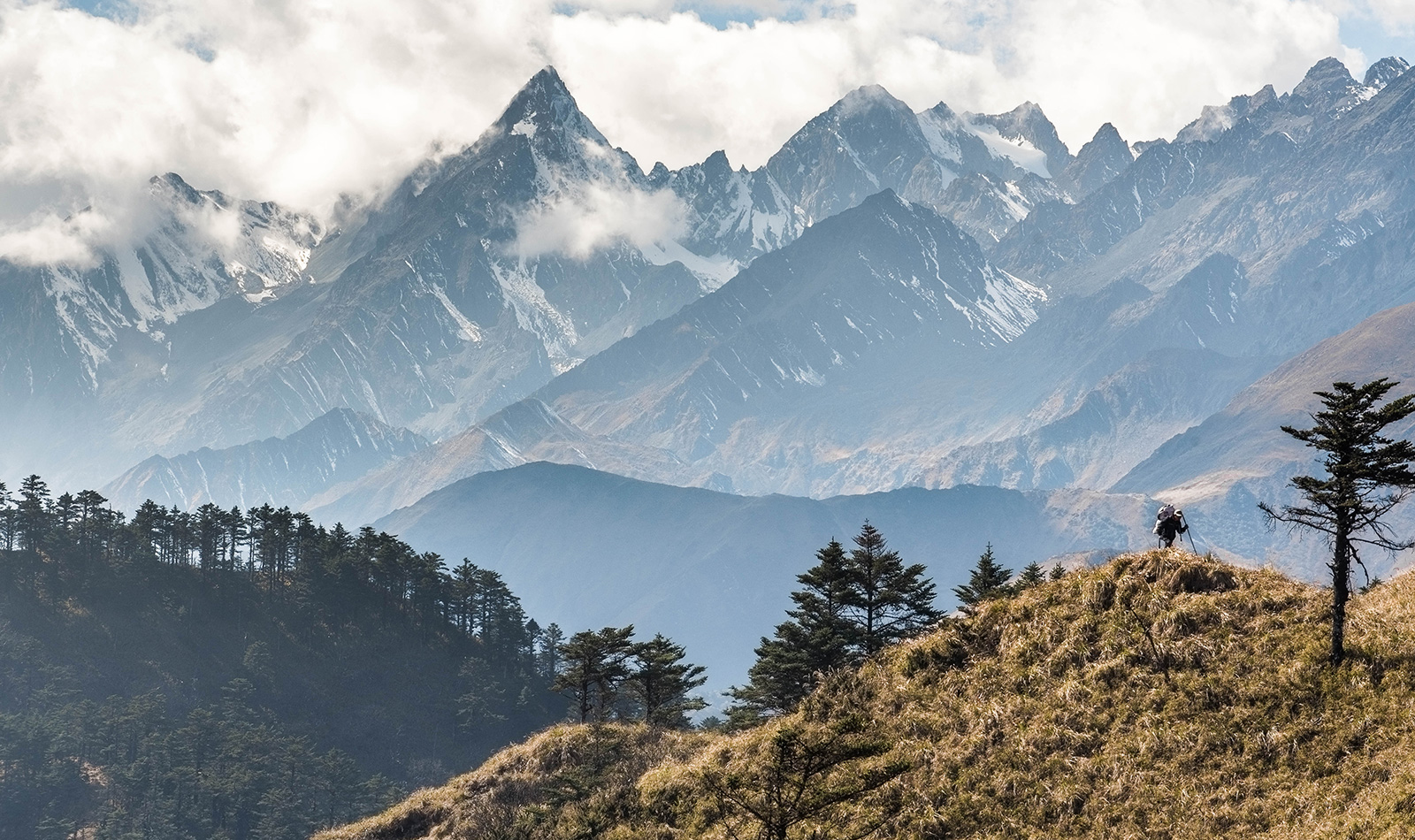 Path of the Panda

The path had long since disappeared. The persistent drizzle was threatening to become a downpour again. We took a short, uncomfortable rest and then resumed our journey, hacking through soggy bamboo forest taller than ourselves.

Leeches. Ugh, no more leeches, I thought. Their wriggling, spindle-like bodies were everywhere: dangling off dew-soaked bamboo, clinging tightly to the stems of the underbrush, and slowly inching up my rain pants. The path had long since disappeared. The persistent drizzle was threatening to become a downpour again. We took a short, uncomfortable rest and then resumed our journey, hacking through soggy bamboo forest taller than ourselves. I wonder if there are any in my hair?

This was the Anzihe Nature Reserve in November, a 101km2 swath of Conservation International and Sichuan Government co-managed mountainous bamboo forest and moss-choked jungle. But, lying on the eastern edge of China’s western Qionglai Mountains, Anzihe is known for much more than leeches. It has one of the densest giant panda populations in China. It is also one of the few places in the world where pandas and snow leopards collide, traversing the same mix of scree and bamboo ridgelines that serve as the highways of the Qionglai, from 500 to 6,250m above the sea.

When we hit the leeches, our team had been patrolling these wild alpine roads for over a week, searching for traces of the elusive passengers and the illegal local hunters that followed in pursuit. Armed with bags of infrared-sensing animal cameras shipped from the US, we were a ragtag gang made of enthusiastic local Chongzhou porters, bearing 40kg burlap packs with teapots strapped on top and pork thighs wrapped inside; two rangers of the reserve, Zhou and San, who navigated the forest like sambar deer; a smart local government official we called Brother Fu from the forestry department; one bright-eyed biology graduate student from Chengdu University; and myself, the only foreign photographer to shoot the reserve and accompany them so deep into its terrain.

I was elated when I first received the invitation from Conservation International to accompany them on this nine-day trek. They would support my application with the local government to enter the hexinqu – core zone – of Anzihe. I would be one of the first Westerners ever to cross these mountains, and we were to spend our last four days in territory not even explored by the rangers who had spent 20 or more years on the reserve. I had never spent so long in the wild nor explored solely in the company of Chinese; I was nervous, but it was too good an opportunity to turn down.

Water, where is the water?

Brittle bamboo stalks, dried by sun and winter crunched underfoot. Thin, brown leaves rattled against my knees, their constant shifting and shaking a stubborn soundtrack to each movement forward. No breeze and no cloud, the sun scorched the exposed ridgeline and my skin. 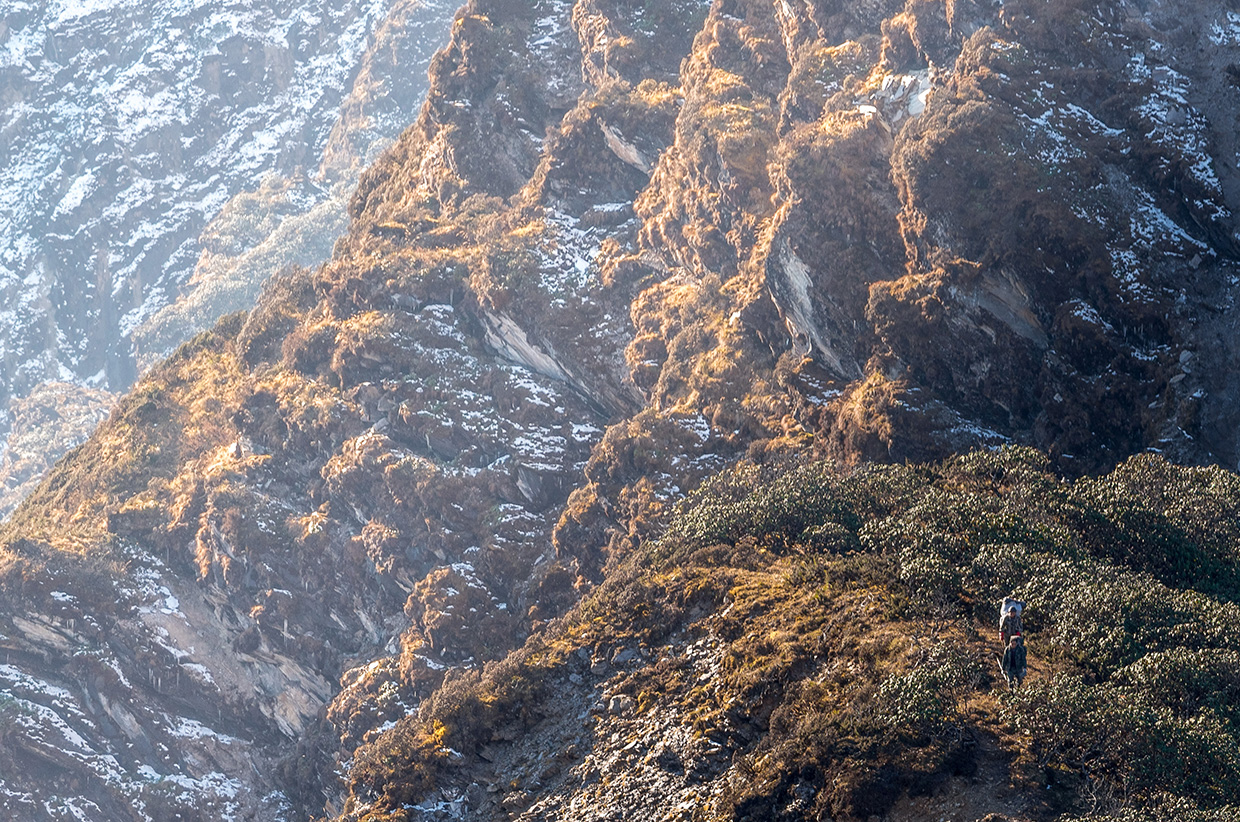 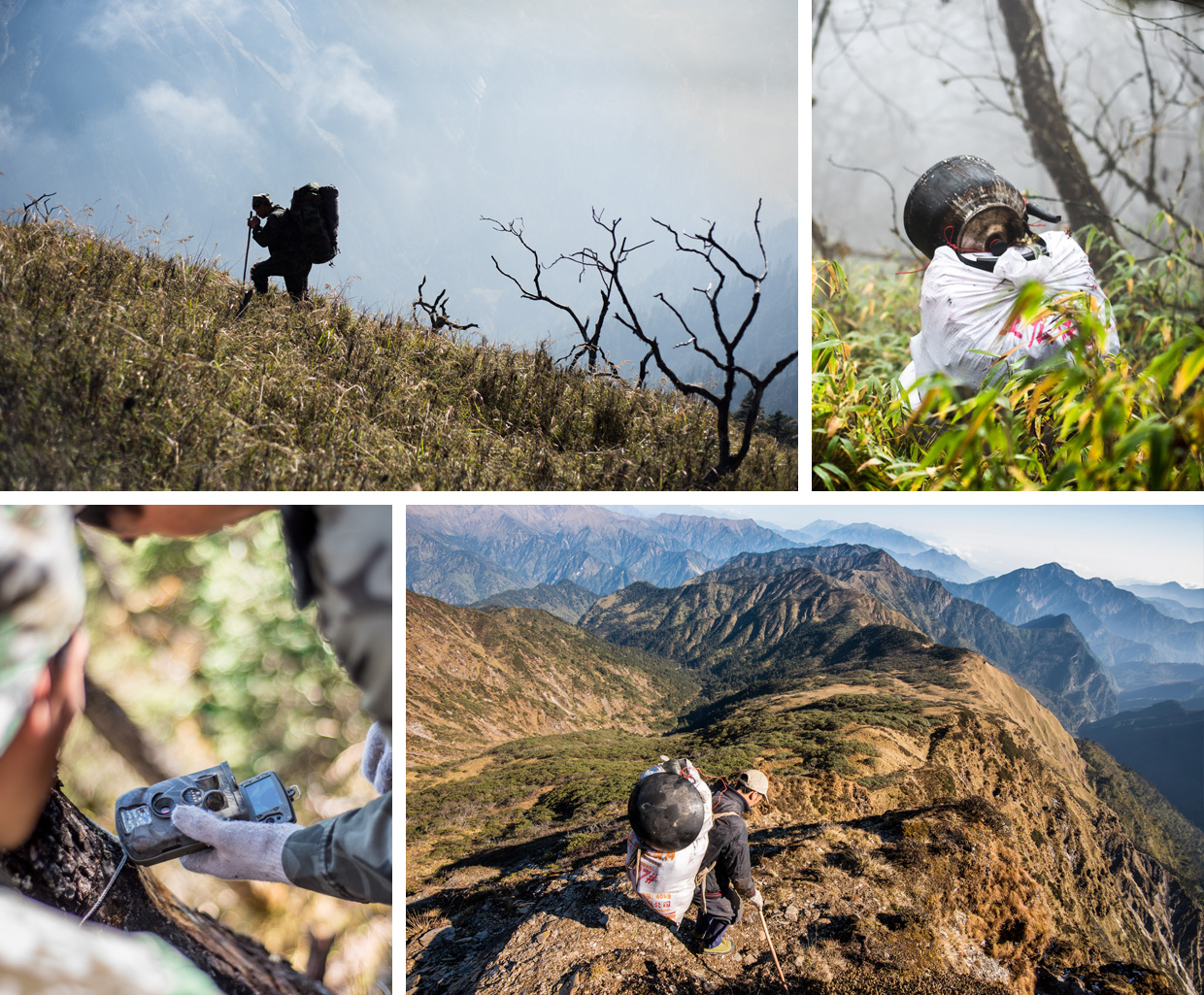 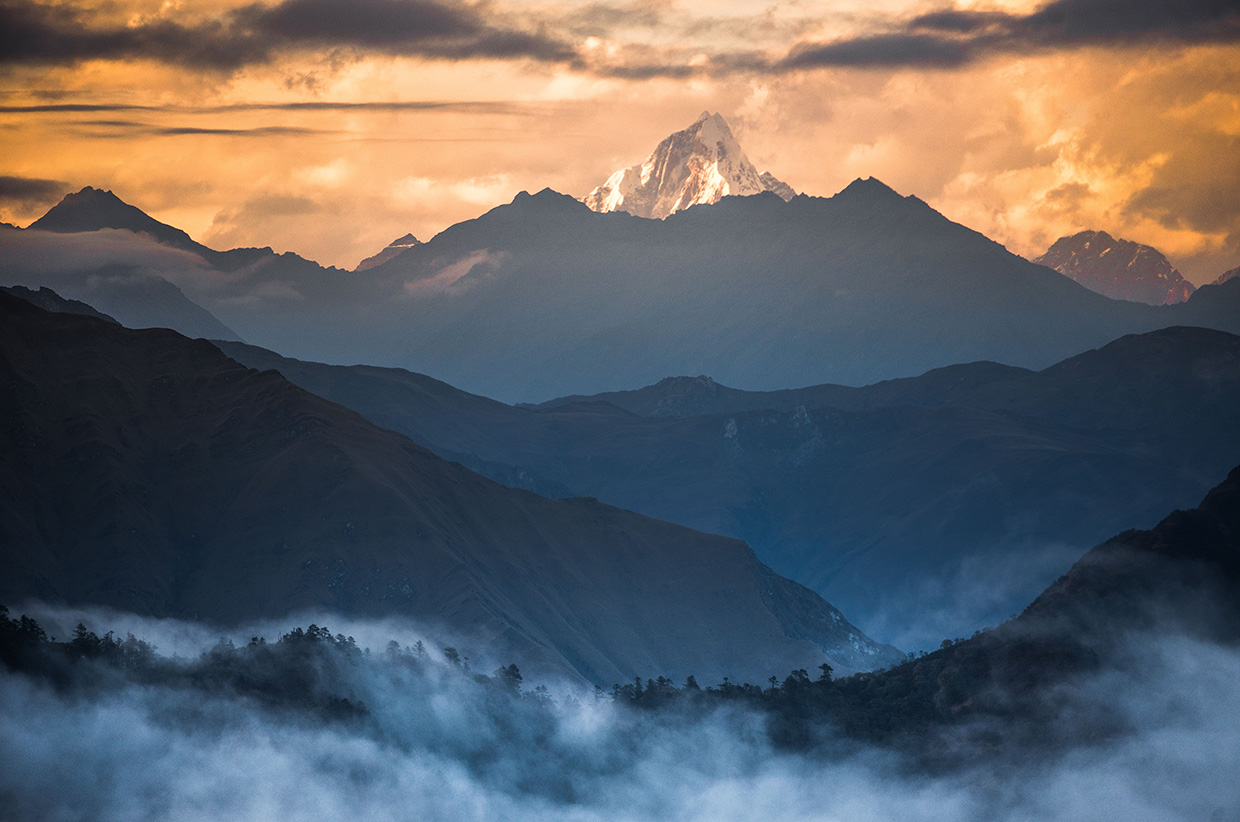 ‘Look, do you know what these are?’

‘Bu zhidao.’ I shook my head at Brother Fu.

‘Snow leopard prints!’ he cheerily replied, pointing with his newly made, fire-hardened wooden pole to a set of prints in the ground. ‘If you stay up here a week you could probably see one with your own eyes.’

I was impressed, and surprised – this was the closest I had been to the rare Himalayan food-chain king. The prints were smaller than I would have imagined, but hardened like cement into the sun-scorched, rocky clay. If you knew how to spot them, they were easily identified amidst the expressway of takin and sambar tracks cutting through the dry carpet of waist-high bamboo.

‘Will there be any water soon?’

‘Bu zhidao!’ Fu responded with a cheerful shrug and the same nonchalant smile he usually carried under his camo-print hat.

The day before, we crossed three passes, arriving at our 3,400m high campsite to find the water source dried up. Luckily, there was enough snow on the peak above to collect and melt for dinner. In the morning, we had spicy porridge made from beans, rice noodles, and leftovers. The porters filled tea into one 500ml bottle each for the day to come.

In the afternoon, I soon discovered that these Chongzhou men, some in their 50s and 60s, thrived under high-altitude sun over mountains and with packs twice the weight of mine – sustained by the amount of water I was accustomed to drinking before breakfast. That morning I had forgone the chance to fill up more than a litre for the opportunity to shoot sunrise from the peak above. It was a spectacular, but woeful, trade. I cursed myself for not asking clearly about the water situation that morning nor for fully understanding the local Sichuan dialect. A day of headaches and quick temper followed.

Two days later, I had accepted this semi-dehydrated, chaotic existence. This was not one of the carefully planned routes I was accustomed to, where hours of toggling satellite angles and examining topo lines yielded a dependable route. We were here for work first; the romantic idea of exploration was a far second. We would get from point A to put our cameras at point B. Water could be found by descending the ridgeline to ravines hundreds of meters below. Campsites would be hacked out of bamboo. The only unknown remaining was how freely the mountains would yield their comforts to us.

By day five the ridgeline descended below 3,000m. Dry, short bamboo stalks gave way to dripping walls of bamboo that buried us in over our heads. A canopy of pine and daily fog prevented anything from drying. We sank below the cloud line that buries the entire lower eastern portion of Sichuan in a year-round, primordial wetness. Our hearts sank with it.

The ridgeline descended below 3,000m. Dry, short bamboo stalks gave way to dripping walls of bamboo that buried us in over our heads. A canopy of pine and daily fog prevented anything from drying. We sank below the cloud line that buries the entire lower eastern portion of Sichuan in a year-round, primordial wetness. 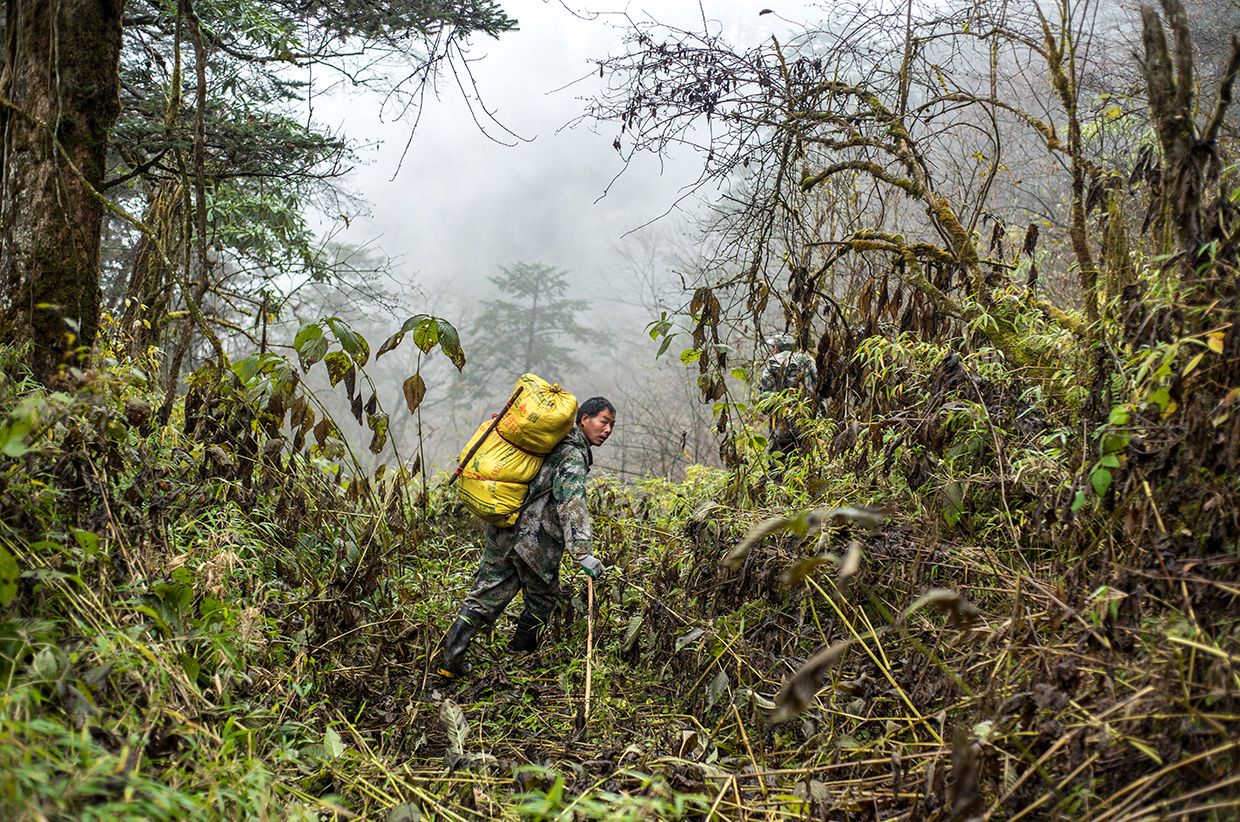 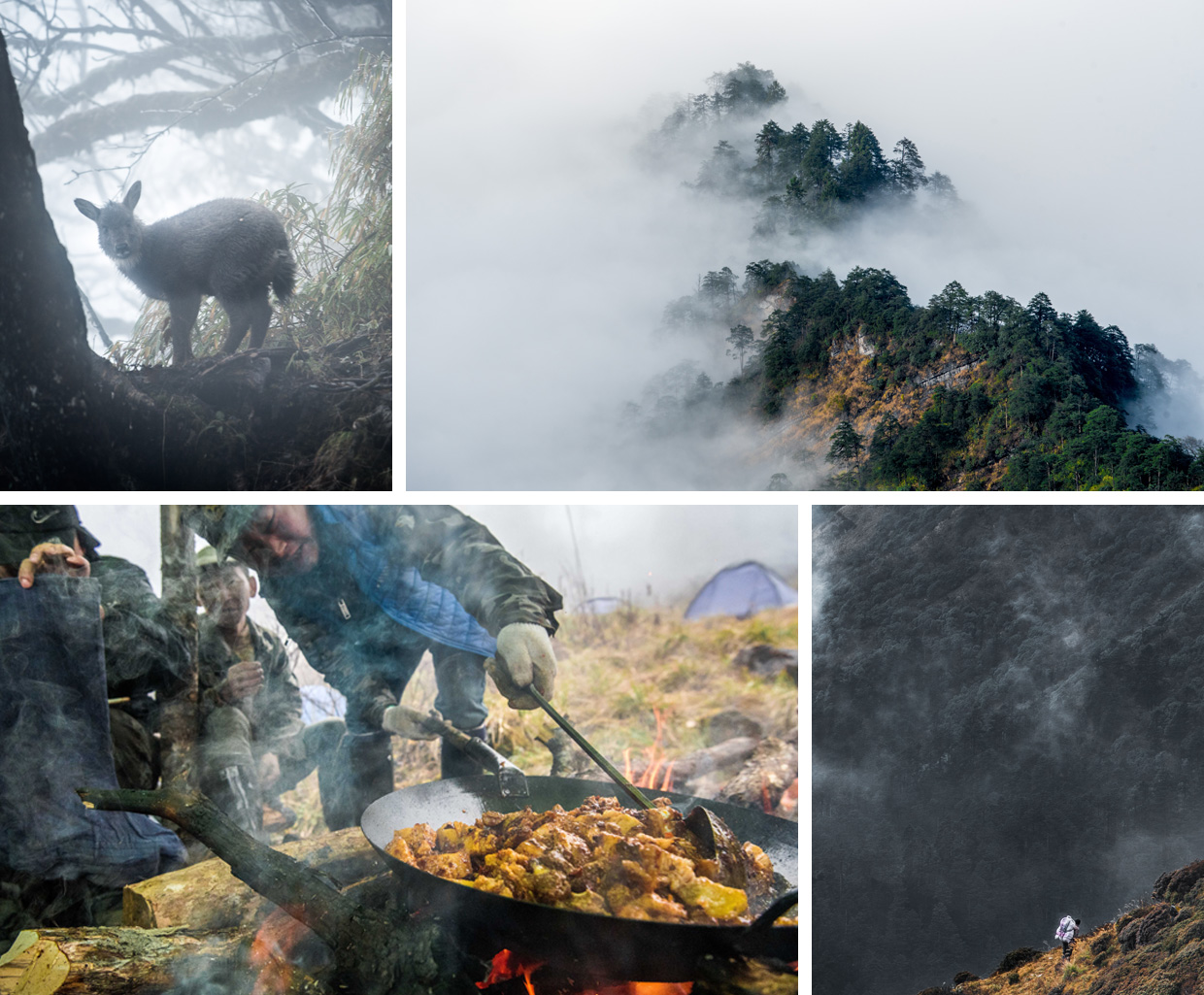 Beyond the careful borders of the leaking blue tarp strung above us, it began to drizzle, then pour. Rain turned to snow, and the fog sealed us into the dampness of the night; the pulsing glow of cigarettes the only tell-tale measure of time.

‘Do they have any waterproof clothing?’ I asked Fu, nodding to our porters who were crashing their way down a slope of mud and sopping vegetation – clad in only rubber boots, patched jeans, and layers of hand-stitched sweaters – as it threatened to rain again.

‘No, I don’t think so,’ Fu replied with his usual grin. Sensing my astonishment, he added, ‘They’ll dry out by the fire tonight, that’s what we always do.’

We pitched camp in a dreary ravine, carving out flat spots for tents against the muddy slope with home-made machetes and staves. The more hedonistic members padded the ground with piles of springy bamboo. Others made quick work of wet logs, cutting away the damp outer wood and using the dry inner pieces for fuel and the chips for kindling. Wax candles were brought out to ensure the initial flame would not die.

Machete-less and tired, my main concern was not letting a stray leech fall through the tent door.

That night the fire was smoky, but it was enough for another simmering soup of pork fat, fentiao rice noodles, tofu, legumes, and wild mogu mushrooms accompanied by a massive kettle of steamed white rice. The grease from the fatty soup was enough to coat your throat, but the baijiu – the homebrewed, 120-proof throat-burning liquor the park rangers brought along in gallon jugs and drank in bowls – was more than enough to scald the lingering taste away and light fires in our stomach.

Bursting with stew and heads spinning, we gathered around the fire, trying not to melt the tips of our boots. Underneath steaming socks and long johns suspended to dry, Zhou and San cracked jokes against flickering flames in local dialect a far cry from the Mandarin I learned in school. Beyond the careful borders of the leaking blue tarp strung above us, it began to drizzle, then pour. Rain turned to snow, and the fog sealed us into the dampness of the night; the pulsing glow of cigarettes the only tell-tale measure of time.

Those days in Anzihe were as far from familiarity as I was from home. I would learn, slowly, that my Sichuan companions were not out to enjoy nature – but neither were they struggling against it. They ascended and descended peaks and trackless jungle in plain clothes as casually as they would a morning commute. I adventured, and battled the snags of the jungle as a guest in Gore-Tex. The mountains finally spat me out with gashes in every expensive outer piece I wore.

This was work, not exploration. Chiku nailao – chore, not play. Our relationship with the wild was worlds apart. In uncharted territory, the Westerner sought adventure; Zhou, San, and the others worked another day. But the task at hand was essential. It governed every move and pushed us on long after tents failed, backpacks broke, and clothes soaked, far beyond where I would have opted for the easier way. 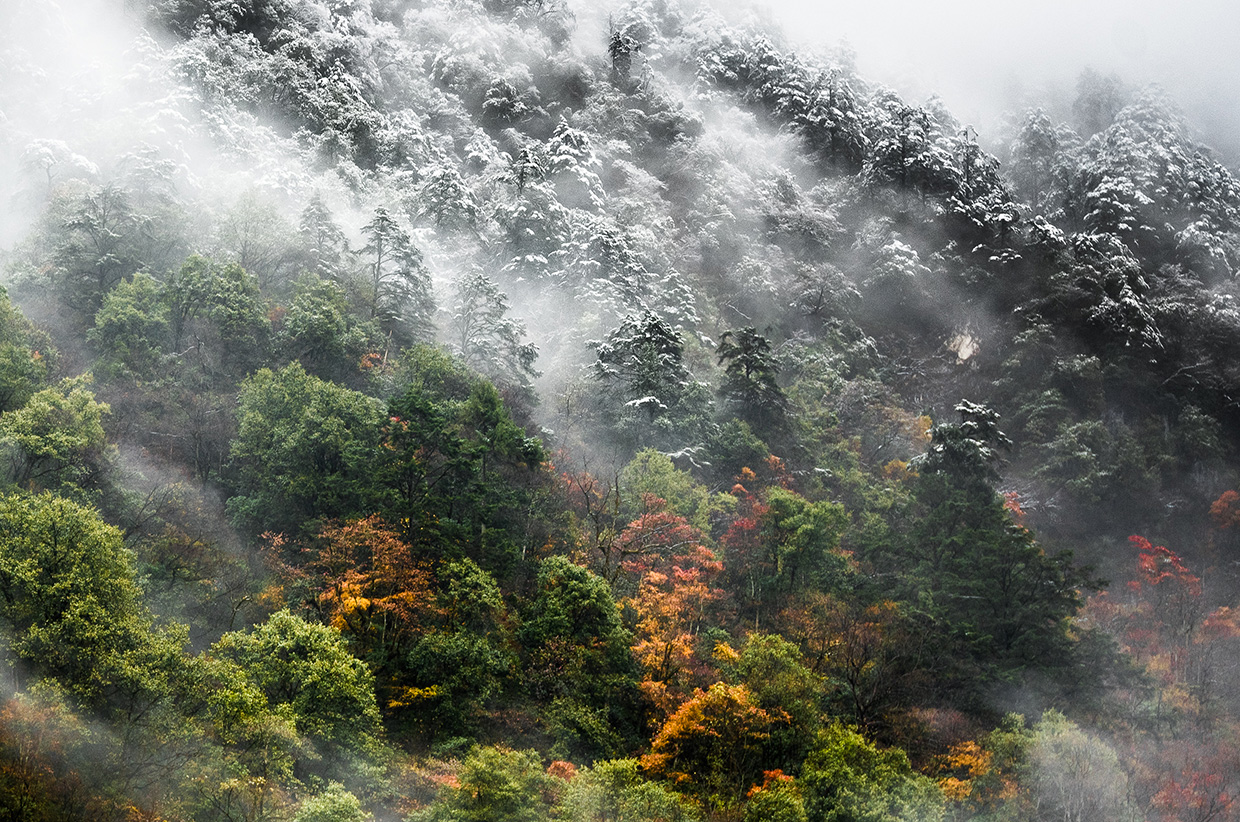 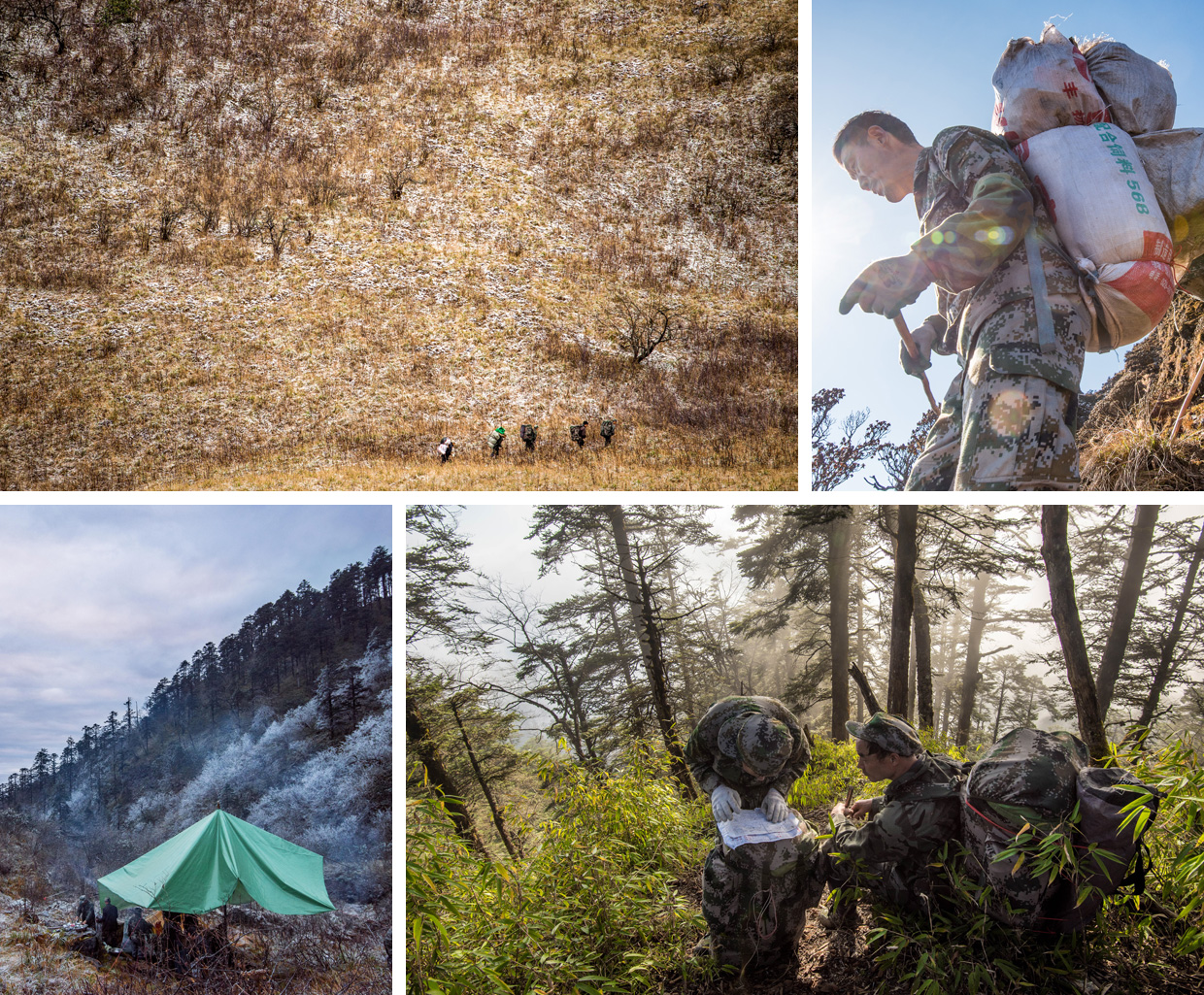 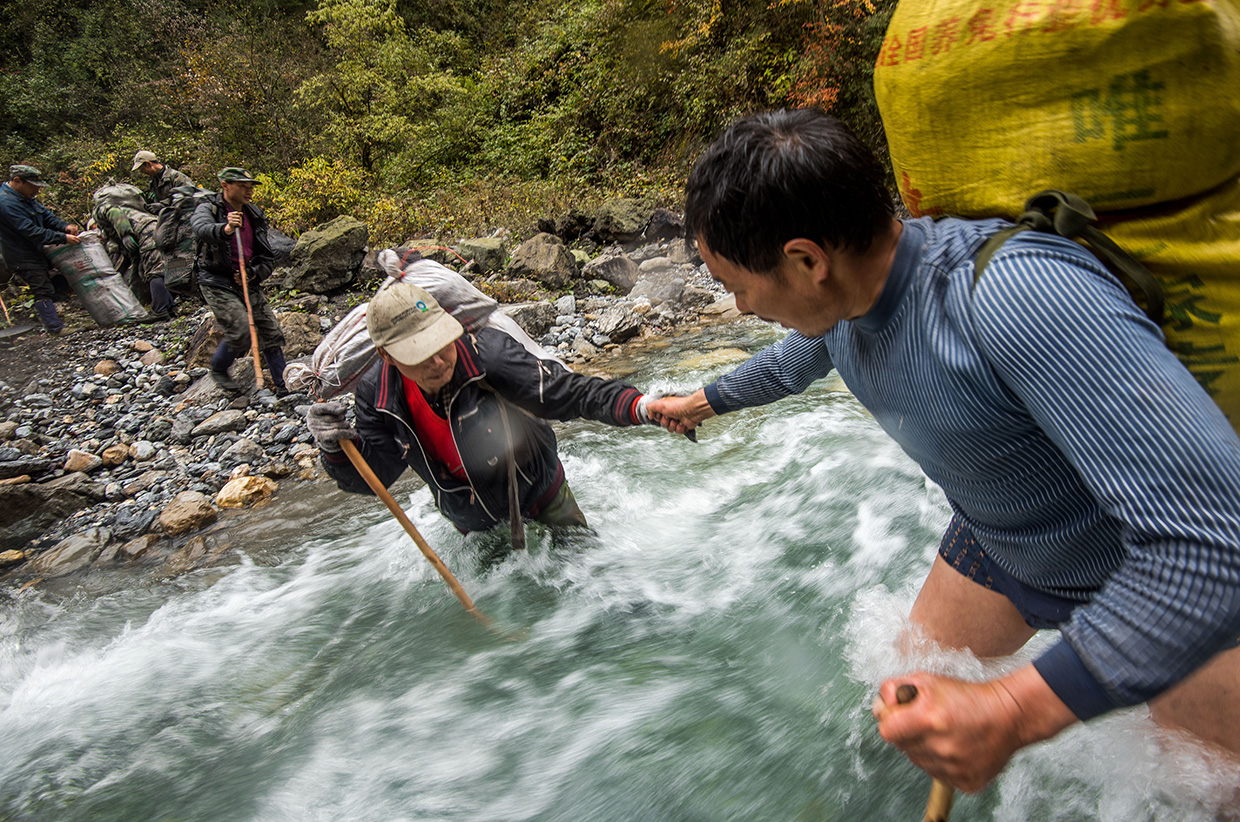 On the seventh day we encountered our first real sign of the panda: dry, American football-shaped, bamboo-filled droppings on a rocky ridge. Later, deeper into the forest, we removed multiple wire traps and destroyed an illegal poaching shelter hidden behind a cliff. We pushed further into the mountains and new regions of the map for four more days, carefully placing and disguising our infrared cameras one by one along the alpine highway.

‘When will you go back up?’ I asked Fu on the last day, as we moved through knee-high river water between banks piled in snow. His sigh was weary, but he still sported a small smile. ‘Oh, we do this at least once every month.’

Respect. For those without the luxury of choice in the wild, dehydration, wetness, and discomfort elicited little complaint and were countered by the immutable custom to simply achieve – and safely return home. There were ways they escaped along the trail: smoke breaks on peaks, gathering around downloaded TV episodes on phones, carrying a rack of pork ribs and cast-iron wok to cook with for dinner. It was a thoroughly estranging experience; as a shameful result I sometimes ridiculed these habits in my mind.

Still, standing there in the river with Fu, both of us long accustomed to the loss of feeling below our knees, one slightly grinning the other nearly spent, there was more to learn from their attitude towards exploration than criticise how differently they did it. Their persistence and aptitude unlocked mountains and jungle I considered unpassable. So, there was always a way, Fu told me. ‘There will always be a path.’

We trudged through the central channel. On each bank, steep forested walls rose out of the water. The current narrowed and the roar of falls drowned out our voices. Onwards.

In 2014, Conservation International began co-management of the Anzihe Nature Reserve with the Sichuan Province government and Chongzhou City Rural Development Bureau. It is a critical watershed and the closest nature reserve to Chengdu, a city near 16 million people. Today, Anzihe is home to at least 26 giant pandas. Their population is steadily increasing thanks to the protection and education efforts of many conservationists and government officials.

Kyle is an environmental and adventure photographer based in Beijing since 2014. He focuses on using his Mandarin and photography to promote conservation and sustainable exploration in China: the other side of the smog. Follow and support Conservation International’s work in China on Facebook.

Journey to the End of the Earth A Mountain Affair 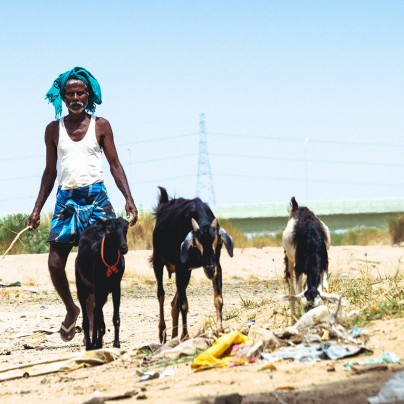