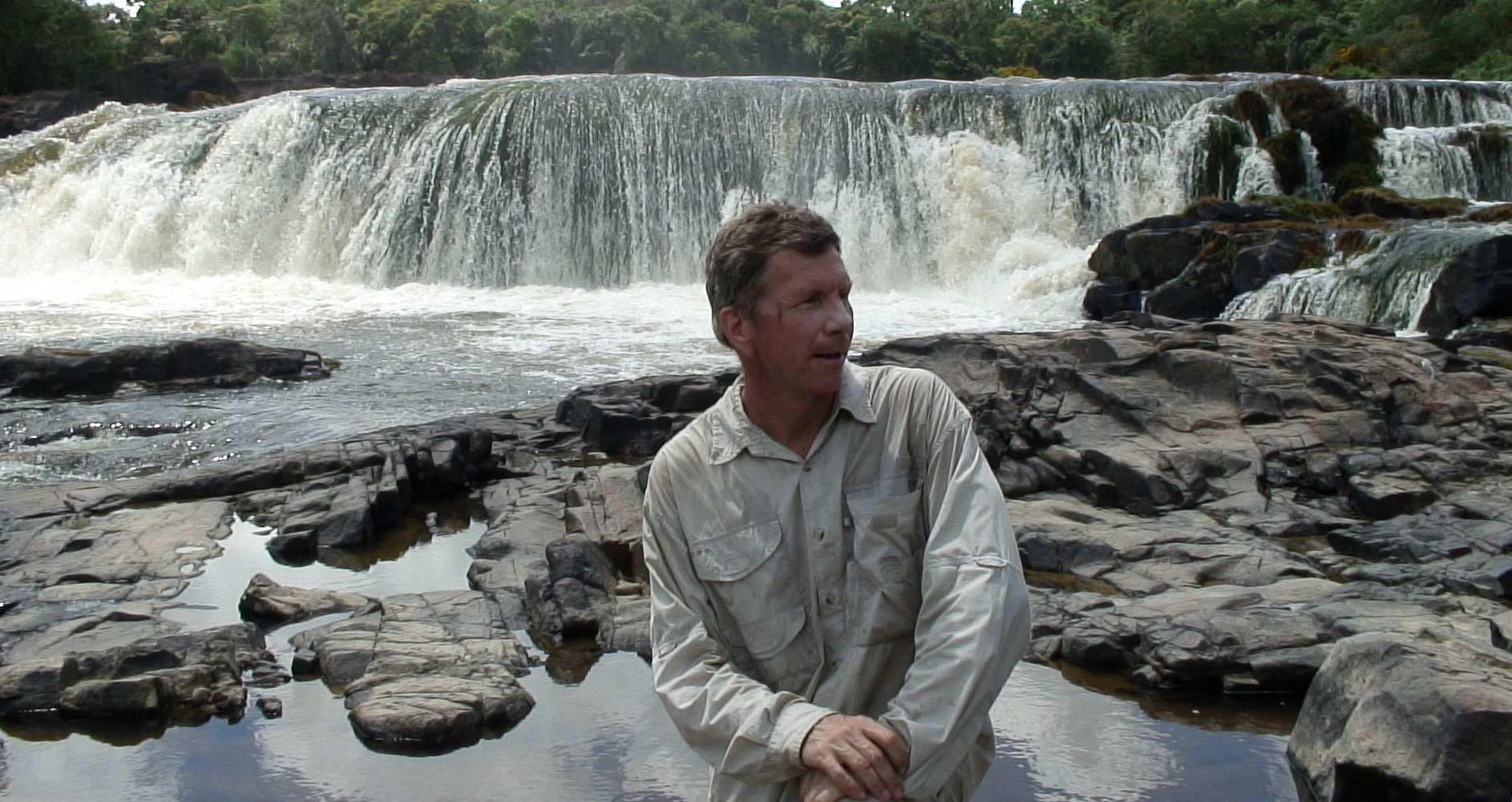 Deep in the jungles of South America, Kevin Casey explores a wild and untouched river isolated from human intrusion by thundering waterfalls, guarded by huge black piranhas and inhabited by some of the strangest and rarest creatures on earth.

When I first see the black piranhas that inhabit Guyana’s pristine Rewa River, I am impressed. They are as long as my forearm. When I notice the bizarre, squishy white parasites that live in their mouths, I am intrigued. They are truly gross, like a magnified photo of a louse. And when I catch my first 30-pound haimara fish, I feel the worry creep in. These river monsters eat black piranhas whole, are very territorial, and have been known to chomp big chunks out of unsuspecting bathers in other parts of South America. And I have been nonchalantly having my nightly swim in this jungle river for a week.

Exploring the world’s least known river systems has been my life for three decades, even though the self-filming of these journeys only began in 2004. I normally travel alone with minimal equipment and spend four to six weeks in the selected region. I’ve shared antelope stew with pygmies in the jungles of Gabon, dodged black bears and survived flash floods in British Columbia, packrafted alone through the Kimberley and now, ventured up the Rewa river in Guyana, the most wildlife-rich environment I’ve ever seen.

When your moniker is the Remote River Man, it goes without saying that finding the truly untouched rivers requires logistical creativity and stubborn determination. With the Rewa this meant a 10-day journey above six sets of waterfalls and rapids just to reach the starting point. This was followed by a four week paddle downstream, filming wild tapirs, groups of capybaras and inquisitive families of endangered giant river otters along the way.

My preference in the wild is solitude, but on this jaunt I was accompanied by Joe Fencer, a Makushi tribesman from Rewa village, further downstream. Joe is a jungle survival expert who still hunts with a homemade bow and arrow. Having seen him put an arrow through the centre of a swimming fish from a standing position in a moving canoe, I was glad he was on my side.

When I catch my first 30-pound haimara fish, I feel the worry creep in. These river monsters eat black piranhas whole, are very territorial, and have been known to chomp big chunks out of unsuspecting bathers in other parts of South America. And I have been nonchalantly having my nightly swim in this jungle river for a week. 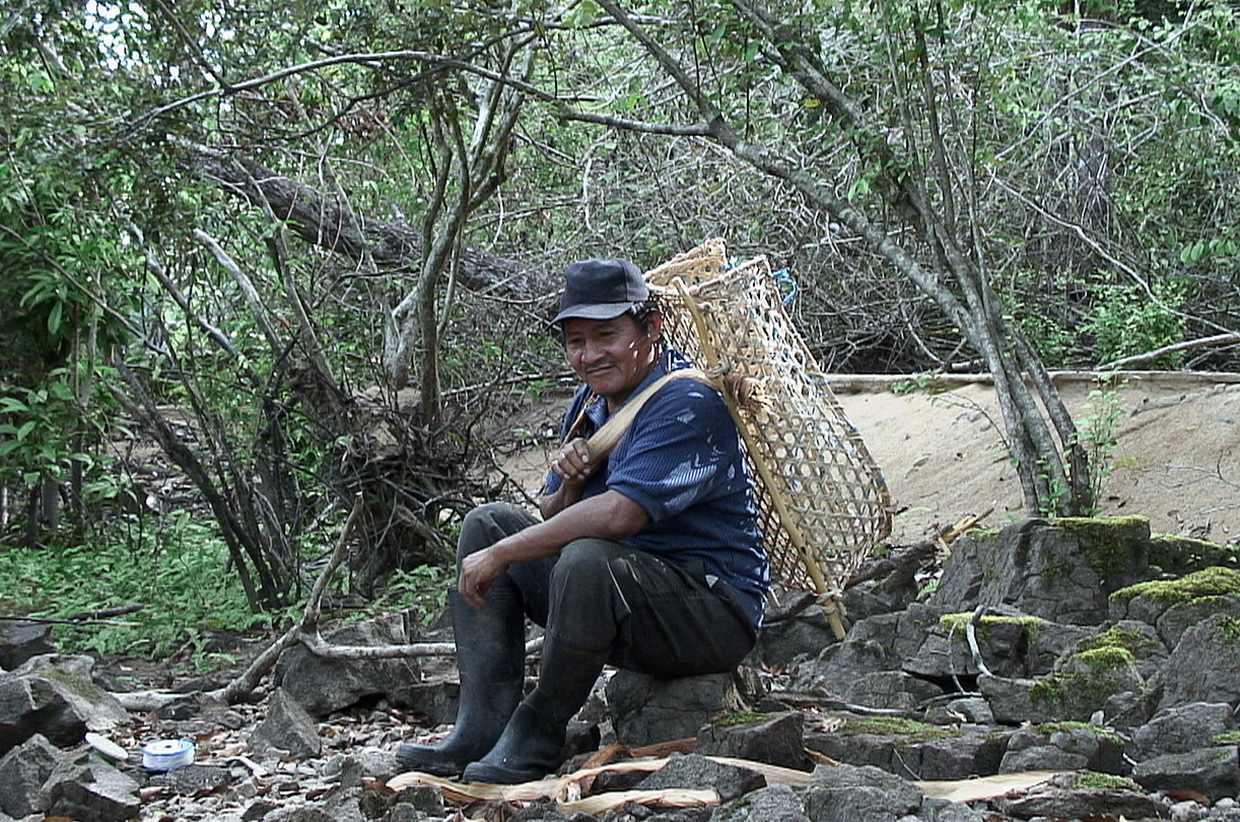 I followed ocelot tracks on the sandy banks, filmed king vultures, toucans and scarlet macaws in the treetops, and was woken each morning by the dawn chorus of red howler monkeys, a sound which seems to combine the roaring of a jet engine with the deep hooting of a derisive baboon. When we got thirsty, we simply hacked a length of jungle vine as we trekked and drank the pure water hidden inside.

With Joe in the back steering and me in the front filming wildlife, we paddled the Rewa’s dark, narrow tributaries, using the machete to hack a path big enough to squeeze the canoe through. Joe knows the upper Rewa as well as anyone, and told me we were the very first persons to explore many of these side creeks. He explained that during a dry year you can see lots of jaguars prowling the banks. Ten individual jaguars were spotted here in 2004 during one 6-week journey, along with an anaconda measuring seventeen feet, four inches long. Due to the extreme remoteness of this area, animals that are normally shy in more disturbed parts of South America show little fear of man, since it is a difficult stretch of river to reach and the indigenous people don’t hunt here.

Over the years I have perfected gear selection for jungle trips down to a fine art. Having seen the size of the scorpions, snakes, and army ant colonies that occupy the forest floor, I opt for a Clark Jungle Hammock with a short, rigid sleep mat wedged in the bottom to widen the shoulder space and give a roomier feel. It gives total protection from mosquitoes and rain, but of course no protection at all from huge rainforest trees that regularly crash to the ground during epic jungle thunderstorms. For that you just need luck. The real challenge is fitting a month’s worth of expedition gear, food and filming equipment into one 90-litre backpack. As the author of Australian Bush Survival Skills (now out of print), I am certainly able to carry less gear (especially food) than some folks by improvising from local materials and living off the land where appropriate, but I still end up with a 35-50 kilo pack.

I explore rivers whichever way works best – on foot, in a local dugout, with a 2.5 kg Alpacka packraft or with an inflatable 18 kg Sevylor two-person kayak, with the spare seat removed to make room for more gear. The kayak works best on lakes and windy, open stretches of river, while the packraft is ideal for small waterways with a bit of current, where portability is crucial. Since I am usually alone and laden with enough gear to last 4 to 5 weeks, I portage around anything above a Class 2 rapid, and keep a watchful eye out for submerged logs with sharp branches poking up; these are a real danger to a rapidly moving packraft. Along the Quall River in western Canada the problem was beaver dams – one day I portaged around eleven of them. When I conducted the first major packraft expedition in Australia along the Kimberley’s King Edward river, the hazard was spiky pandanus palm trees, which line the river and have big spines along their trunks. These can turn a raft into a pincushion. In northern Gabon I travelled with four chain-smoking Baka pygmies, and marvelled at their jungle diet – massive juicy wood grubs, hornbill birds, monkey stew and a duiker antelope, which I watched them efficiently butcher in thirty minutes using two machetes. Encountering wild forest elephants in a rainforest clearing and paddling past a python draped over a tree branch were just two of many highlights from this trip. The python was much longer than the boat, and its distended middle suggested it had just eaten a good-sized mammal.

In Guyana, Joe took me for walks deep in the forest, pointing out where a paca had made a trail or a brocket deer had rubbed its antlers against a branch. He had tremendous basket weaving skills, and could fashion a durable daypack out of a single palm frond in five minutes. I followed ocelot tracks on the sandy banks, filmed king vultures, toucans and scarlet macaws in the treetops, and was woken each morning by the dawn chorus of red howler monkeys, a sound which seems to combine the roaring of a jet engine with the deep hooting of a derisive baboon. When we got thirsty, we simply hacked a length of jungle vine as we trekked and drank the pure water hidden inside. 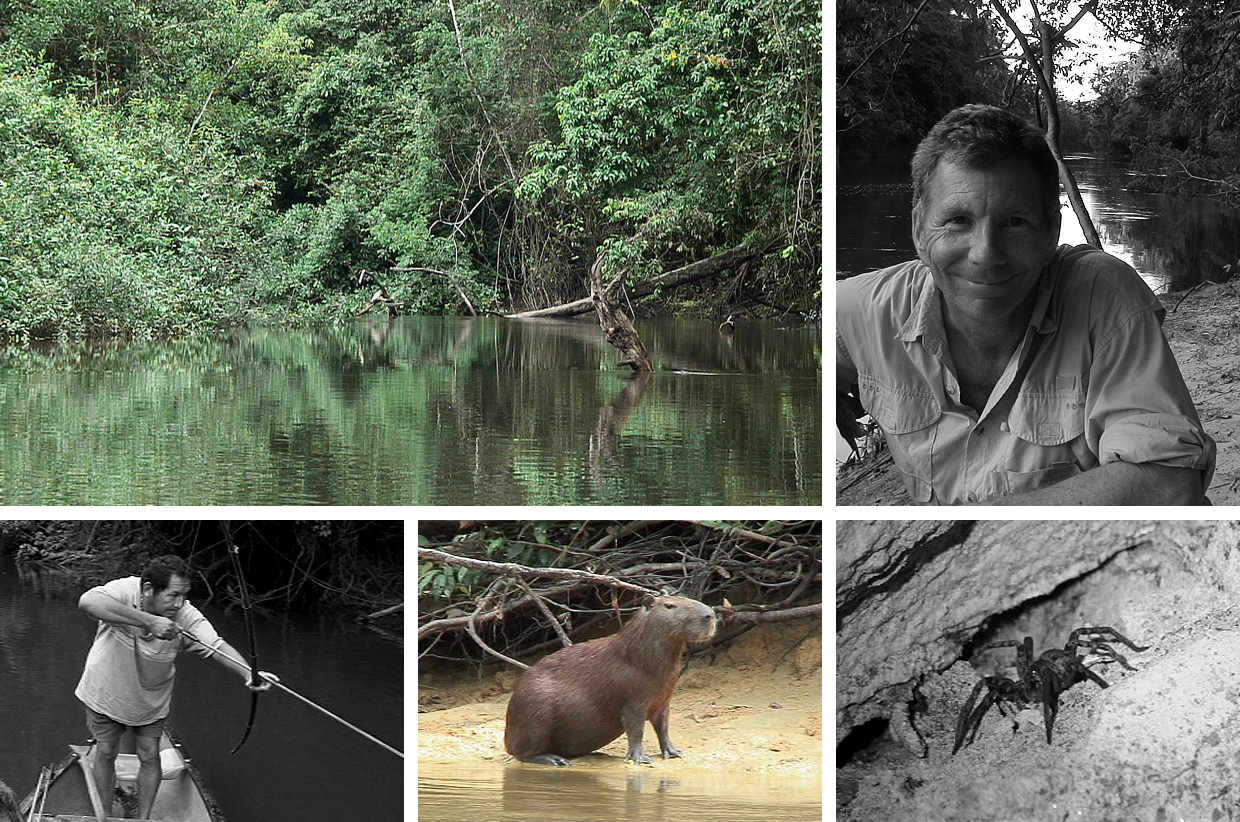 Above Carona Falls, the upper Rewa is brimming with spectacled and dwarf caiman, black piranhas, fat haimara and a sleek, silvery eating fish called the kuti, about a foot long. Joe’s favourite meal was kuti with onions, accompanied by that indigenous South American staple: cassava-based gruel. Below the falls things get more serious – there are freshwater stingrays, big black caiman, electric eels and that star of Amazon horror stories, the candiru, famous for its occasional forays into the urethras of swimming humans. Stories of jungle dangers are hugely exaggerated, however. I know of no recorded cases of a person being consumed by piranhas, though this occurs regularly in movies. And the candiru’s preferred habitat is the meaty gills of catfish, not the urinary tracts of people. Candiru invasions of humans are extremely rare – less than a dozen recorded cases. In my view, the most dangerous part of all my river expeditions is the car trip from my house to the airport. Once in the wilderness, I’m fine.

The danger in exploring distant rivers is that one trip gives you grandiose ideas for another. While studying maps of the northern Kimberley for my packrafting epic, I spied a series of coastal creeks so rugged and remote that the only way in or out would be by helicopter. It’s unlikely the area has seen a human footprint, Aboriginal or otherwise, for eighty years or more, yet it contains every type of typical Kimberley habitat – spectacular waterfalls and freshwater gorge country, rainforest pockets, tropical savanna, mangrove swamps and even some white, sandy beaches. Of course you can’t sleep on these beaches, since the crocodiles wait until you’ve fallen asleep and pull you (and your tent) into the ocean for a handy meal. I’ll be spending nearly two months up there, totally alone, in 2013.

Then there was the comment I heard from the guy who helped me get to the starting point of my Guyana adventure: “You know the Rewa is one of the wildest and most beautiful rivers on earth, and very few people get up to the headwaters like you’re doing. But I know of another river that absolutely NO ONE has ever been up. Even the Makushi don’t go there. I haven’t been there myself – it’s as close to inaccessible as it gets, and completely unexplored.”

Then he tells me where it is. It is a secret I will keep, for myself, for later. Black jaguars, giant otters, tapirs and rare monkeys swim through my head, and I begin to dream…

In my view, the most dangerous part of all my river expeditions is the car trip from my house to the airport. Once in the wilderness, I’m fine.

Remote River Man DVDs are available from the Products page of Kevin Casey’s website at: www.remoteriverman.com

All DVDs are $19.95 each plus postage and include Coast of Bears (67 minutes), Rewa: Guyana’s Primeval River (61 minutes) and Packrafting the Kimberley (42 minutes) which includes the bonus feature Jungles of Gabon (20 minutes). Kevin ships worldwide.

You can also find a number of exciting videos from Kevin’s epic river journeys on the Remoteriverman YouTube channel.

Polarbears And Paddleboards Climbing In Iraq