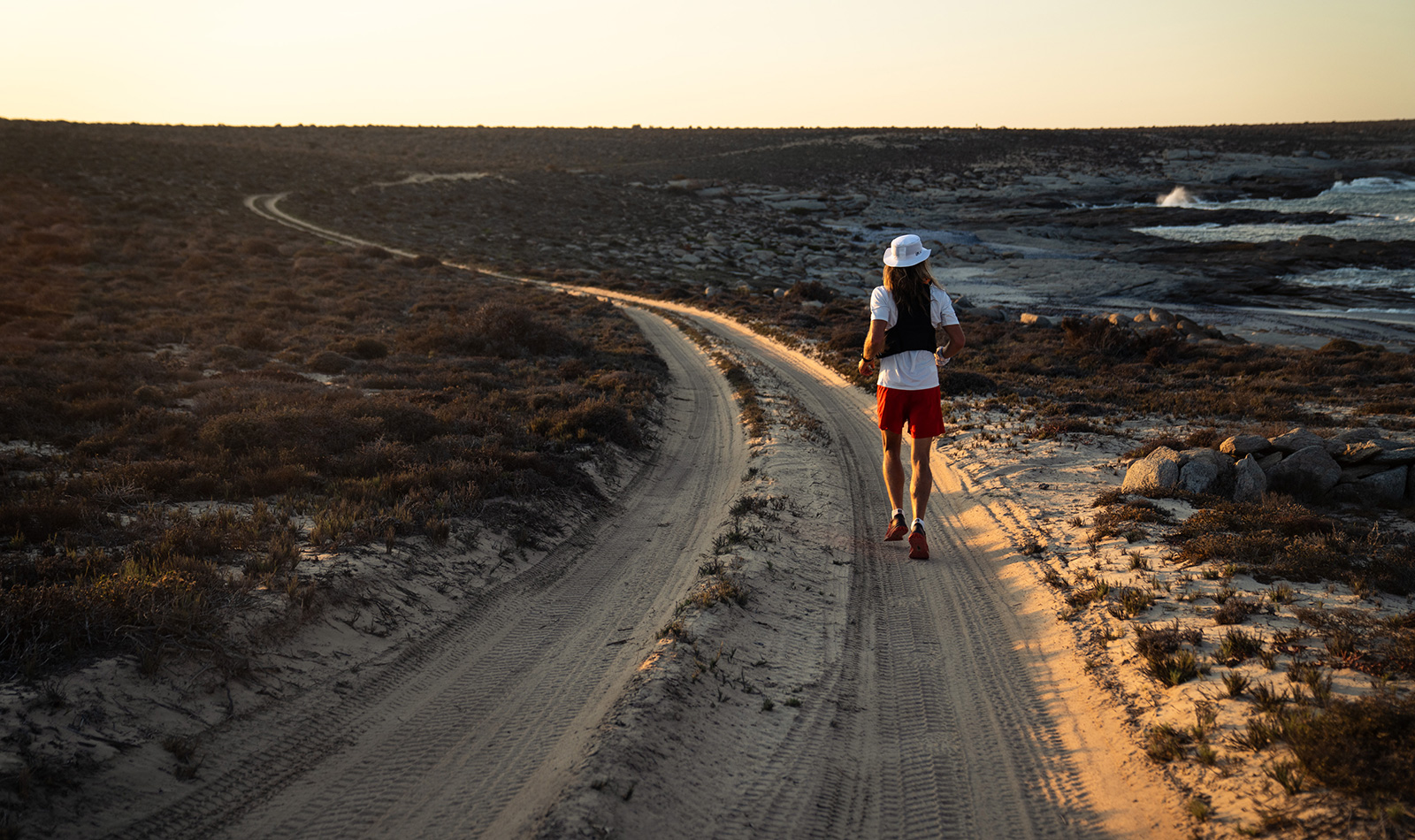 From a vehicle, there’s not a lot to look at along the West Coast of South Africa. But we’re here on foot, stopped and hunkered down out of the midday heat, a few guys and girls wearing the vulnerable expression of love. You know the one: when you’re in on a secret far greater than you could ever imagine. One that locks a smile on your face while Armageddon thrashes out around you. Drivers call us crazy as they pass, but we’ll let them be for now.

As with most blank spaces on the map, it turns out that there are a lot of secrets here. Within the surfing community, whispers of Brand se Baai have compared its left-hand break to the best in the world. But in the lust for waves, only the most committed have put in the effort to find this elusive spot. For decades, Brand se Baai’s isolation, volatile landscape, and secrecy have kept it off the tourist map and safe from the circus that follows popular trends. Those in the know value what they’re sitting on, and only share it with the like-minded. It’s a culture of conservation that protects pristine places from our own species. By default, humans tend to fuck things up.

I’ve spent many years surfing these breaks, but my peers refer to me as Dom the Runner due to a little side-passion I have. Like the ocean itself, this coastline is home to life like no other. This is the Cape Floristic Kingdom which, for its size, is the most biodiverse place in the world – and it’s best experienced on foot. Plants that grow nowhere else on the planet thrive here on a combination of extreme weather and mineral-rich soil. What the driver-by misses is the multitude of miniature succulents and flowers nestled away under the bush, and the shy wildlife that survives off them. This is most prevalent in places like the Olifants River estuary, which is a critical staging point for flamingo migration.

You’re already familiar with the minerals that create this biodiverse wonderland. They’re in your toothpaste, paint, ceramics, abrasives, colourants and cell-phone screens. Garnet, rutile, zircon, leucoxene – their names are as alien as the products they become. But do the maths on every time you use one of these and you can imagine the massive demand for them. MSR, an Australian mining company that has been restricted from mining in its home country due to its unethical and often illegal activities, has found riches in the South African sand. Sadly, the isolation of the West Coast Region works in their favour, and, once prospecting papers are signed, the government puts minimal effort into ensuring that their operations are above board. 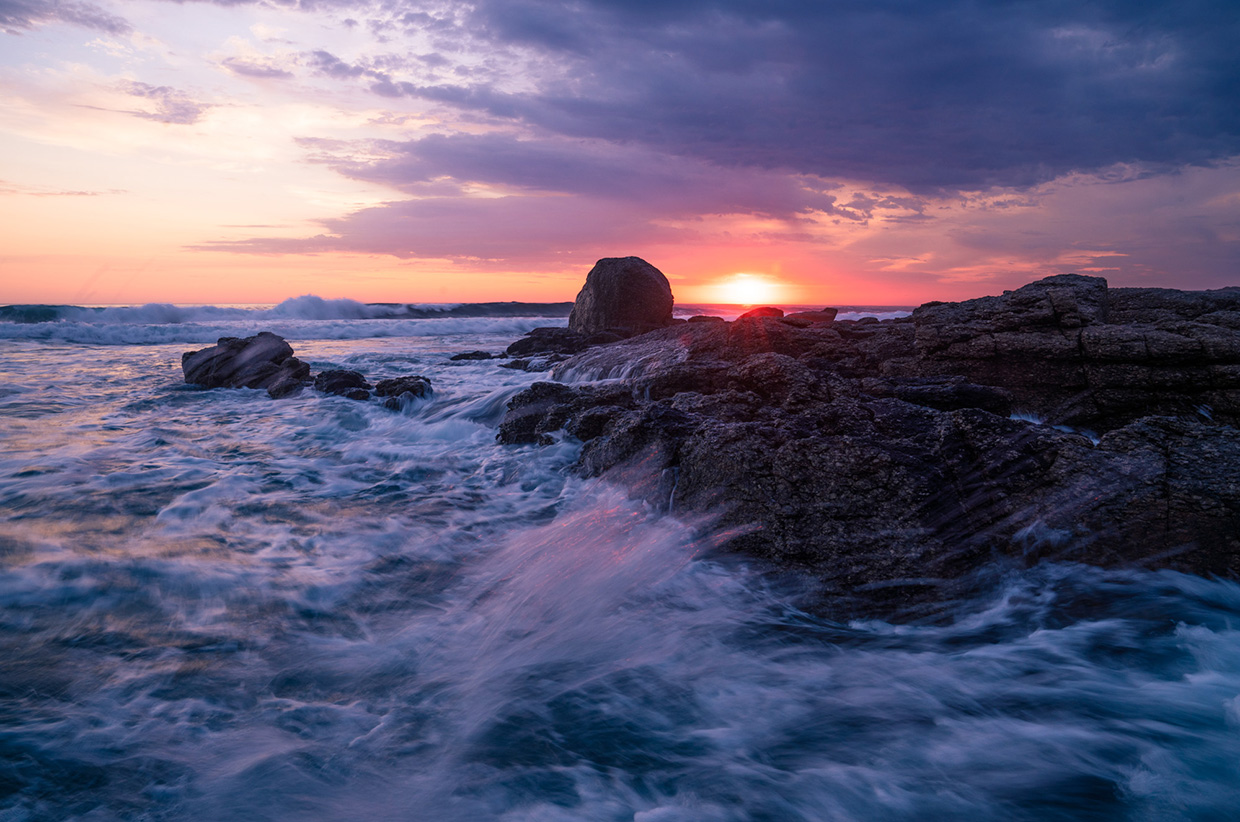 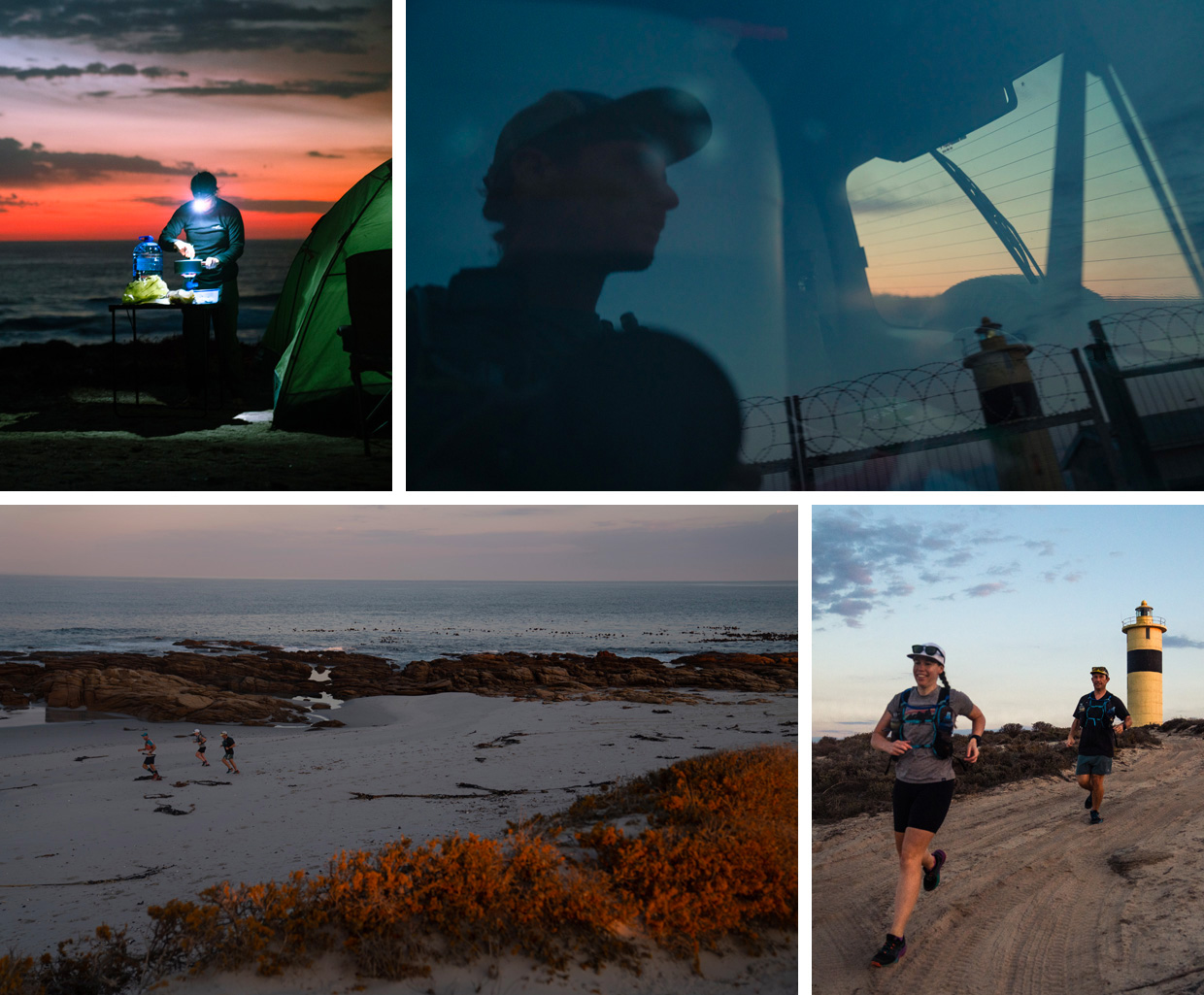 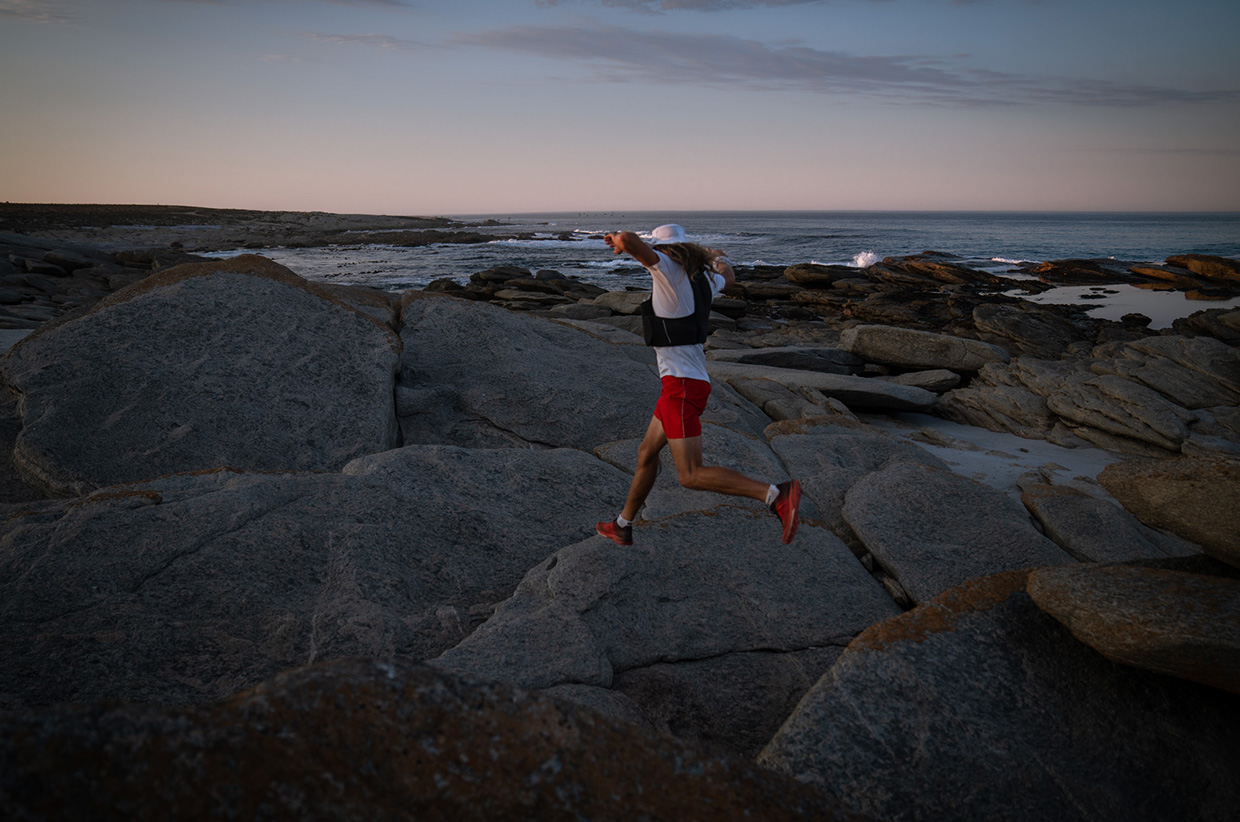 Big-wave surfer Mike Schlebach witnessed the destruction MSR was causing to his childhood surf spots, and realised that in order for people to protect this land, they needed to know what they have to lose. So he formed the NGO Protect The West Coast (PTWC), which aims to keep mining operators accountable for their actions and have minimal ecological impact on their environment. But it’s not only surfers that have something to lose here, so I decided to introduce the running world to this wonderland.

From the Groenrivier Lighthouse to the Olifants River estuary is a little more than 100km of coastline. It is barren. Don’t expect to see anyone, or to find any water – or phone reception. It’s a place where the reclusive go to die, and once you’ve spent a few days exposed to the elements you’ll believe they’re on to something. The climate is tumultuous, with gale-force winds and extreme temperatures. It leaves one hardened but humbled. But to those who stand their ground to nature’s temperament, she eventually calms and grants you a window to paradise. Somehow, this was the window we chose for Run West, which would take us to the entrance of the MSR mine. We planned on doing so over three days, free-camping along the way, and opened the invite to anyone who wanted to experience the West Coast in its primitive form. Our crew was diverse, only really sharing a sense of adventure and a growing concern that this could be one of the last times we would be able to run along these beaches in their natural state.

On day one, we were dropped off at the lighthouse just before sunrise for a 46km run back to camp. Navigation mostly involved keeping the sea on our right-hand side. There was little sense of ceremony. We weren’t here for the prestige, so shortly after falling out of the cars we fist-pumped, tagged the lighthouse, and skipped down to the shoreline. We quickly settled into a rhythm and raced the sun to the horizon.

Dread filled us every time we had to hike up to the road. Lacking any vegetation to keep the ground firm, the sandy jeep tracks swallowed our footing, doubling our effort and halving our speed. There were no rules in avoiding the tracks, and everyone quickly resorted to klipspringing through the scrub, the risk of being scratched up and potentially landing on a snake being far more appetising than the soft sand.

It was a wasteland – one that the untrained eye may struggle to observe, but after 80km of running across pristine shoreline, and hearing the stories of experts on the topic, this felt like walking across a mass grave.

Underestimating the terrain, we were slower than expected, but still made progress. Fortunately our support crew were on top form and appeared exactly when needed with coffee and every snack imaginable. It had been a concern coming into the trip that our crew were all surfers, and we weren’t sure where their priorities would lie when the waves were good. But they held off their callings and treated us like royalty. Day one ended in the mid-afternoon. It broke us, but almost half of the distance was done. Each day would only get easier from here. 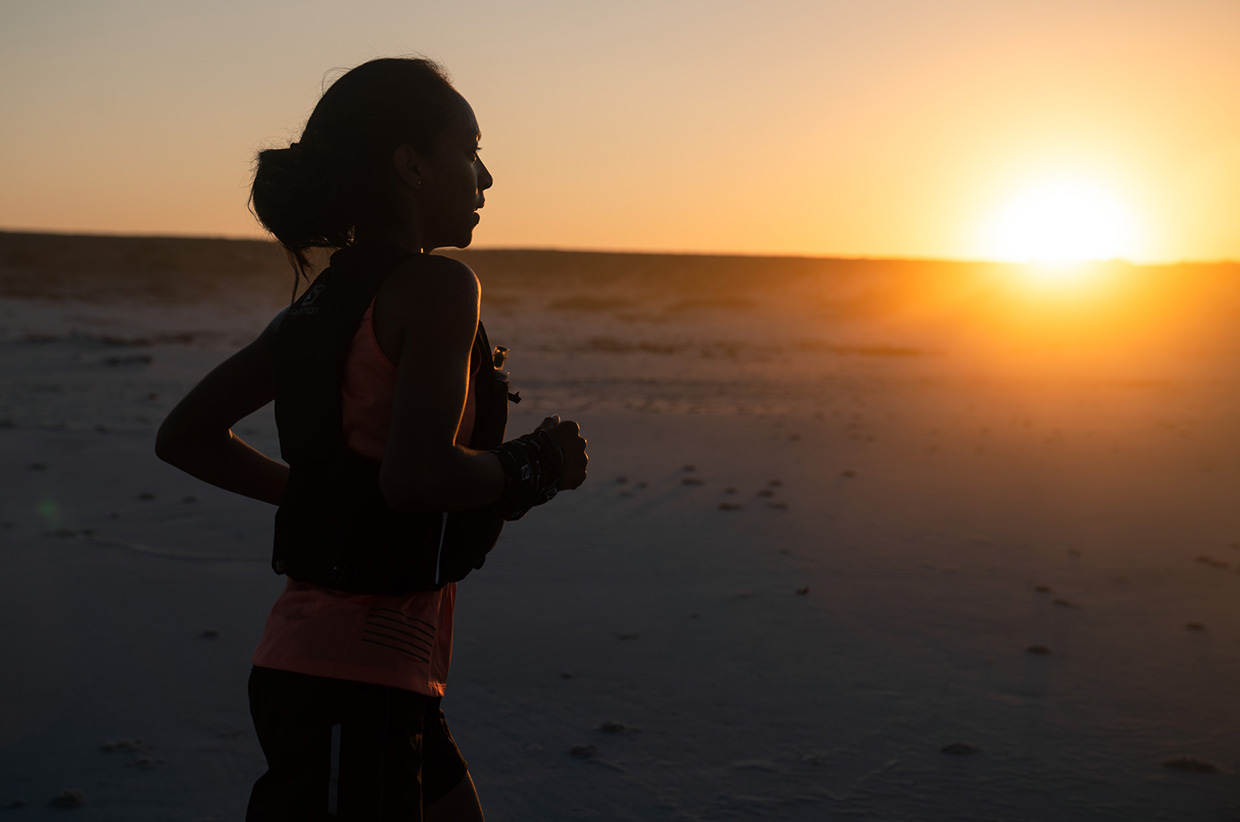 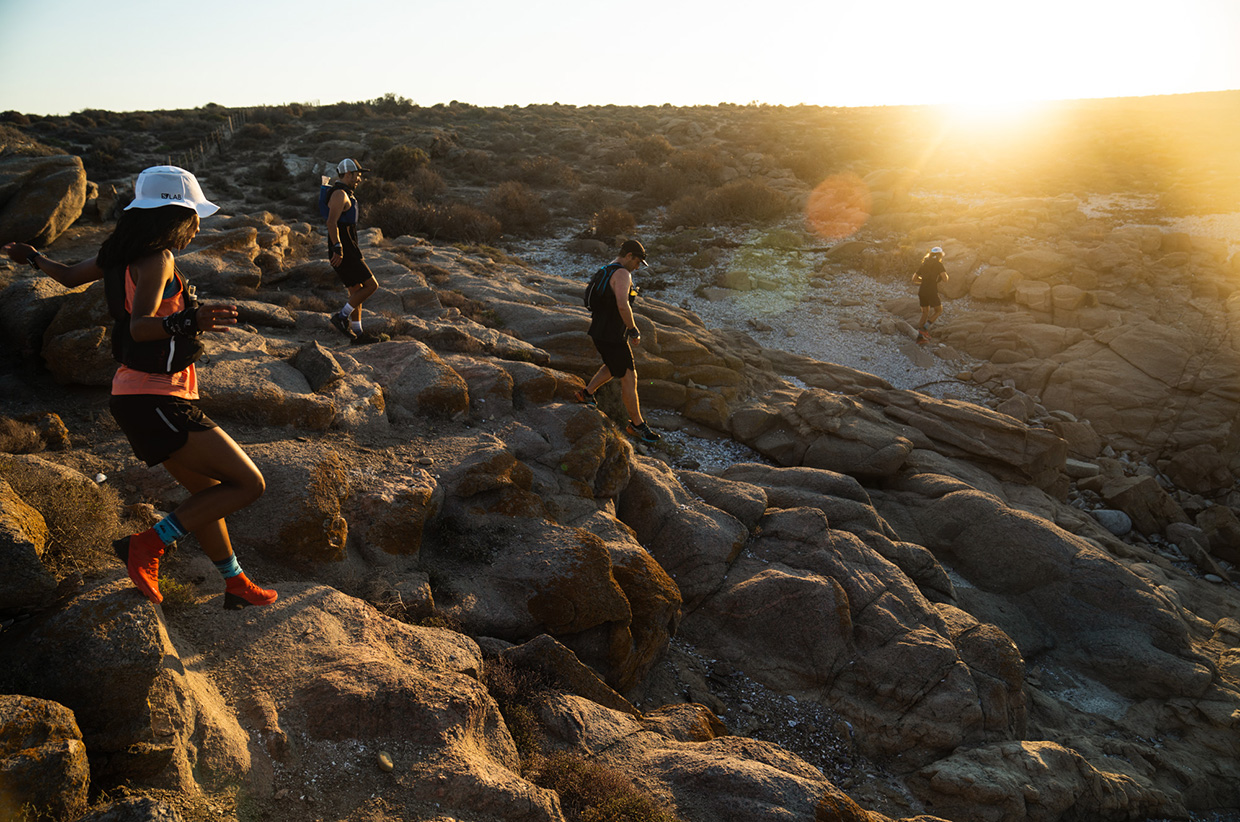 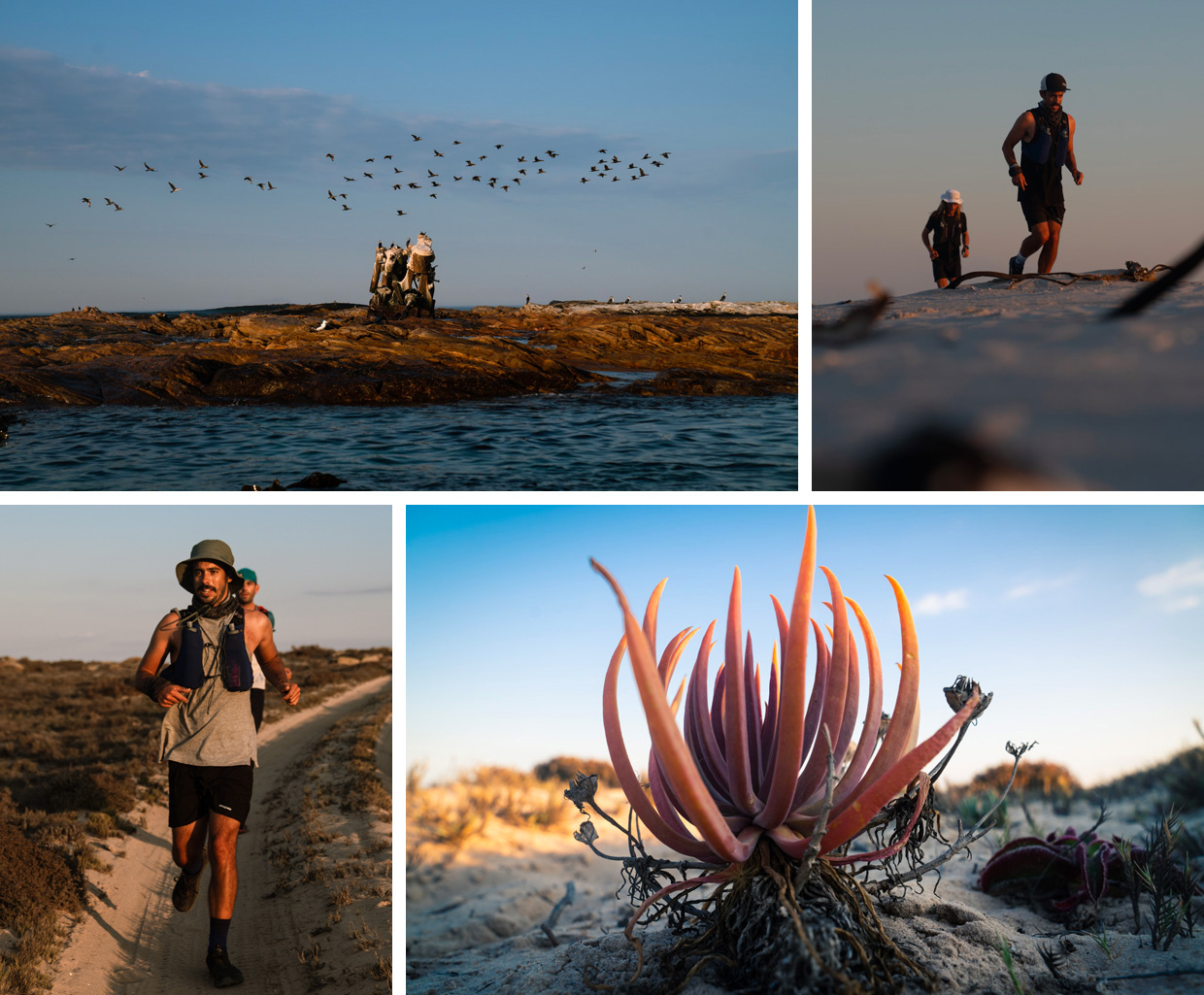 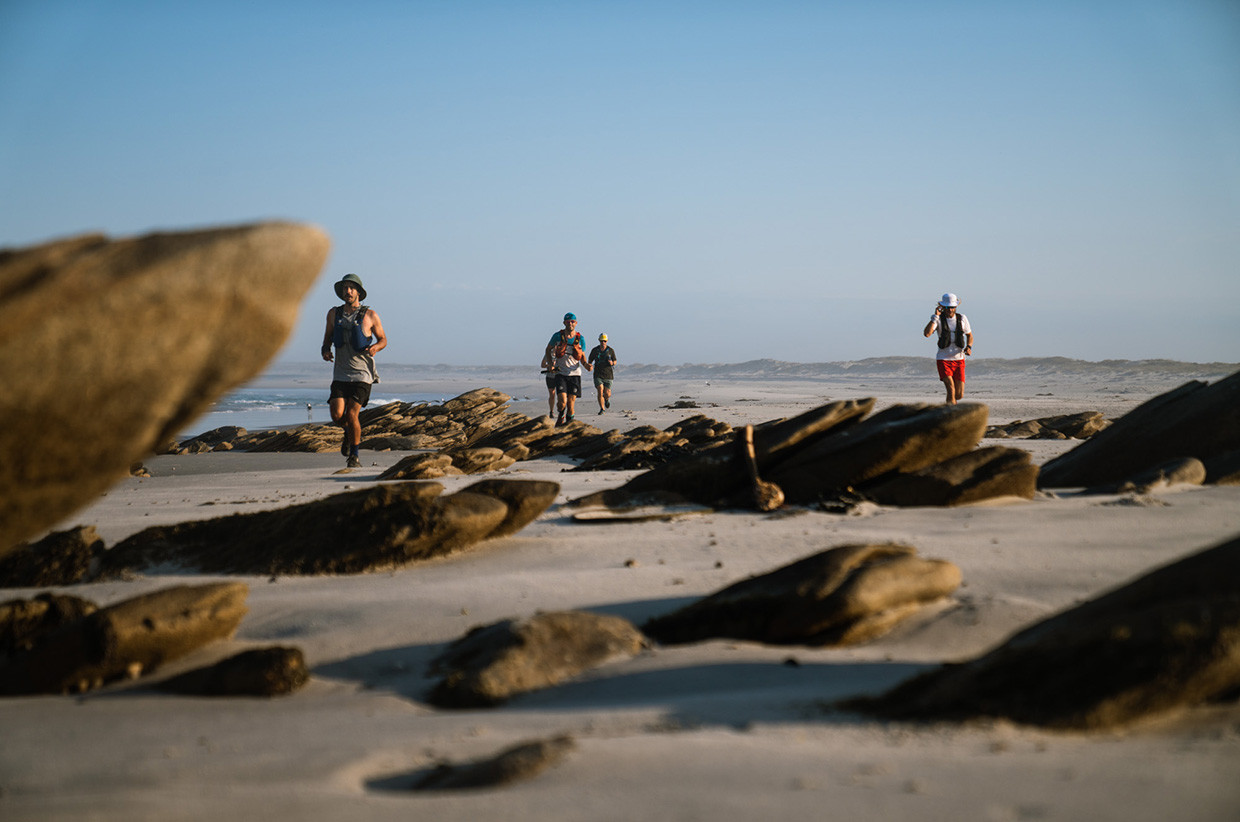 We broke camp at the start of day two and shot out towards the mine. The next 26km would slowly degrade as we got closer, and this became almost biblical as a swarm of locusts clouded our path. Kamikaze in nature, they dive-bombed us, one making me check to see if I had lost a tooth. The coastline became gruelling and we cut inland to the road that passes Tormin.

But something wasn’t right. Sand dunes tens of metres high were beached on the foot of the road, but they didn’t flow with the landscape. Later, hundreds of metres of shade cloth lined the roadside. Our homework revealed that these were not dunes. It was waste sand that had been dug up, had all of its minerals extracted, and then dumped. For around 10 years Tormin has been trying to grow wild sage on the dump to regenerate the landscape, but nothing has grown. And how can it when there are no nutrients left in the soil? This seems to be common practice: committing on paper to have some sort of rehabilitation programme but not actually considering if it is going to be successful or not.

Our final camp was located between the mines on a beach of crushed mussel shells. In places they were compacted into solid ground with a fine white dust puffing up behind each footstep. We finished running early and the crew dispersed – some surfed, some caught mussels, others cooked and drank beer. There was a remarkable peace, and, for the first time in as long as I could remember, I was content just sitting for hours and watching the world go by. Later that evening, members of PTWC joined us. It was our first contact with the outside world since setting off. Amongst the usual drama that floods media channels, we learnt that Table Mountain was burning. It all felt so removed and strange. All that seemed relevant was our final project, marching on MSR.

Mike and I agreed that the most impactful campaign would be to peacefully disrupt the MSR operation. If we caused trouble, we wouldn’t be taken seriously. But with good media we could draw a lot of attention to the mine and their illegal activity (see Memorandum of Grievances in links below), which had led to a pending High Court review and an appeal. To mine before these were concluded would be premature. In short, they shouldn’t currently be operating at all, but they were – in breach of numerous requirements in their Environmental Impact Assessment Report.

We decided to split our actions. The runners would take to the beach and follow the high-tide line. The PTWC protestors would march to the head office and hand over the Memorandum of Grievances. 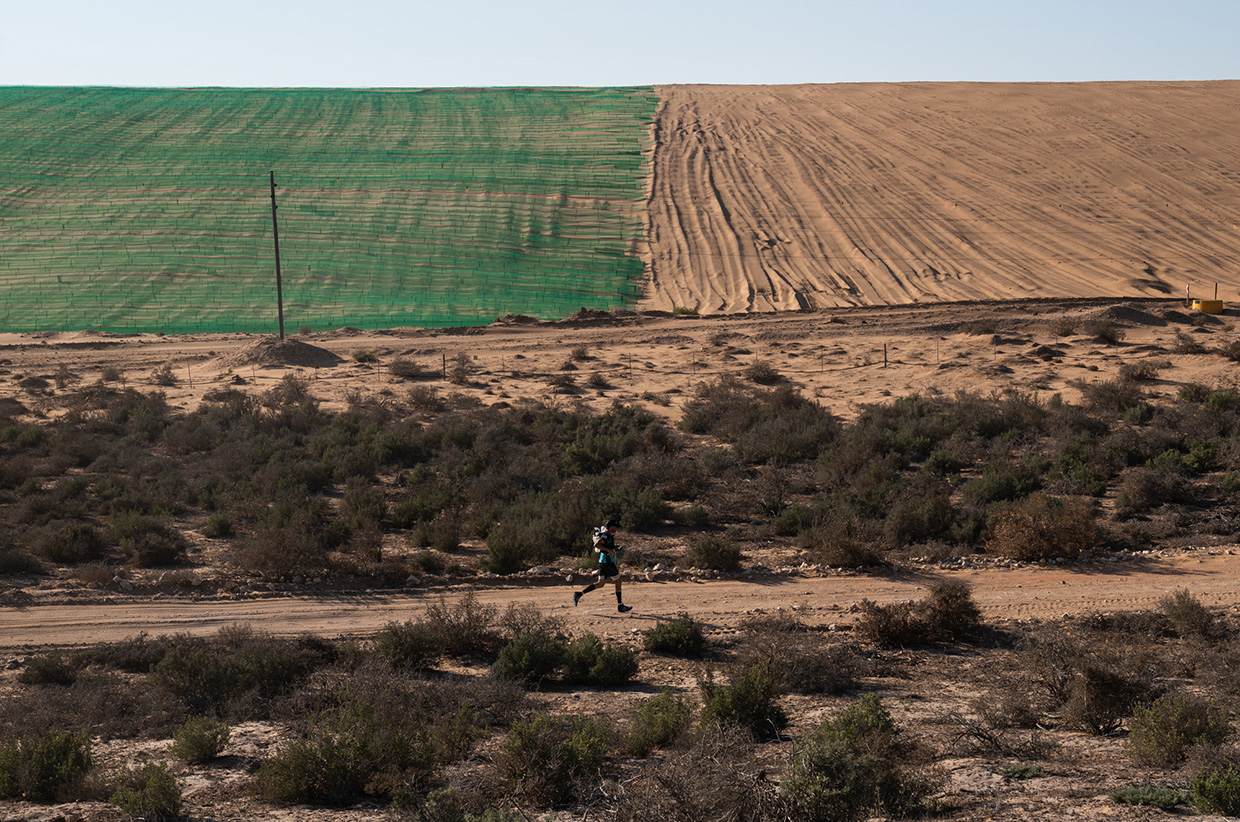 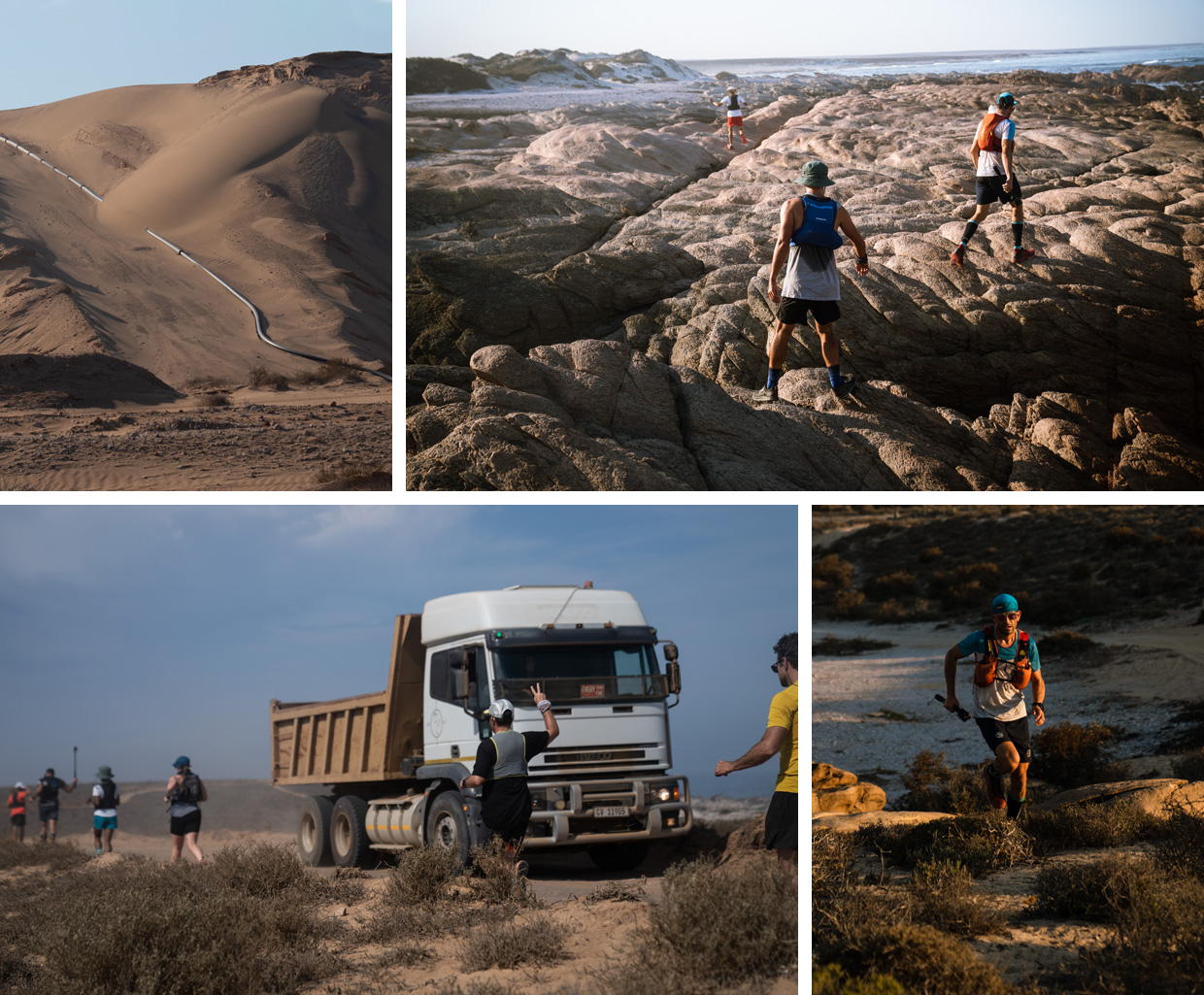 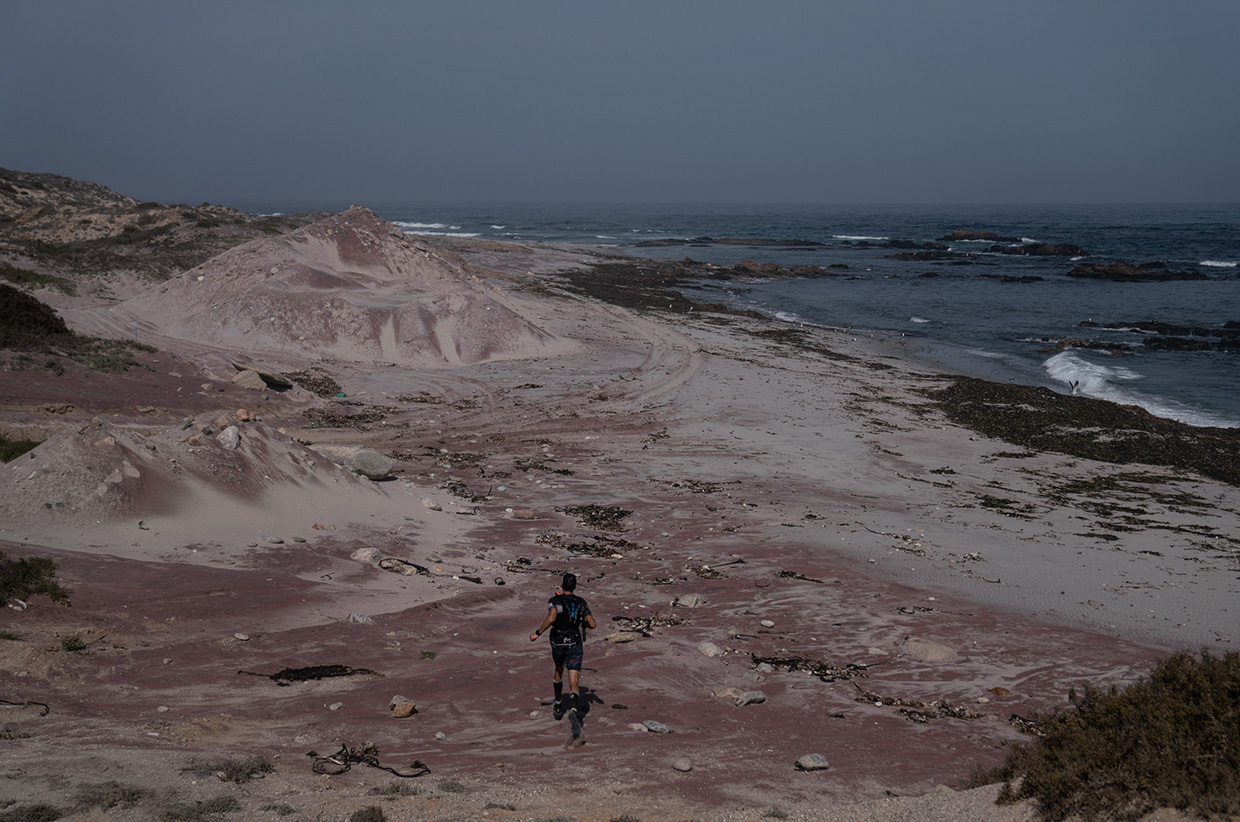 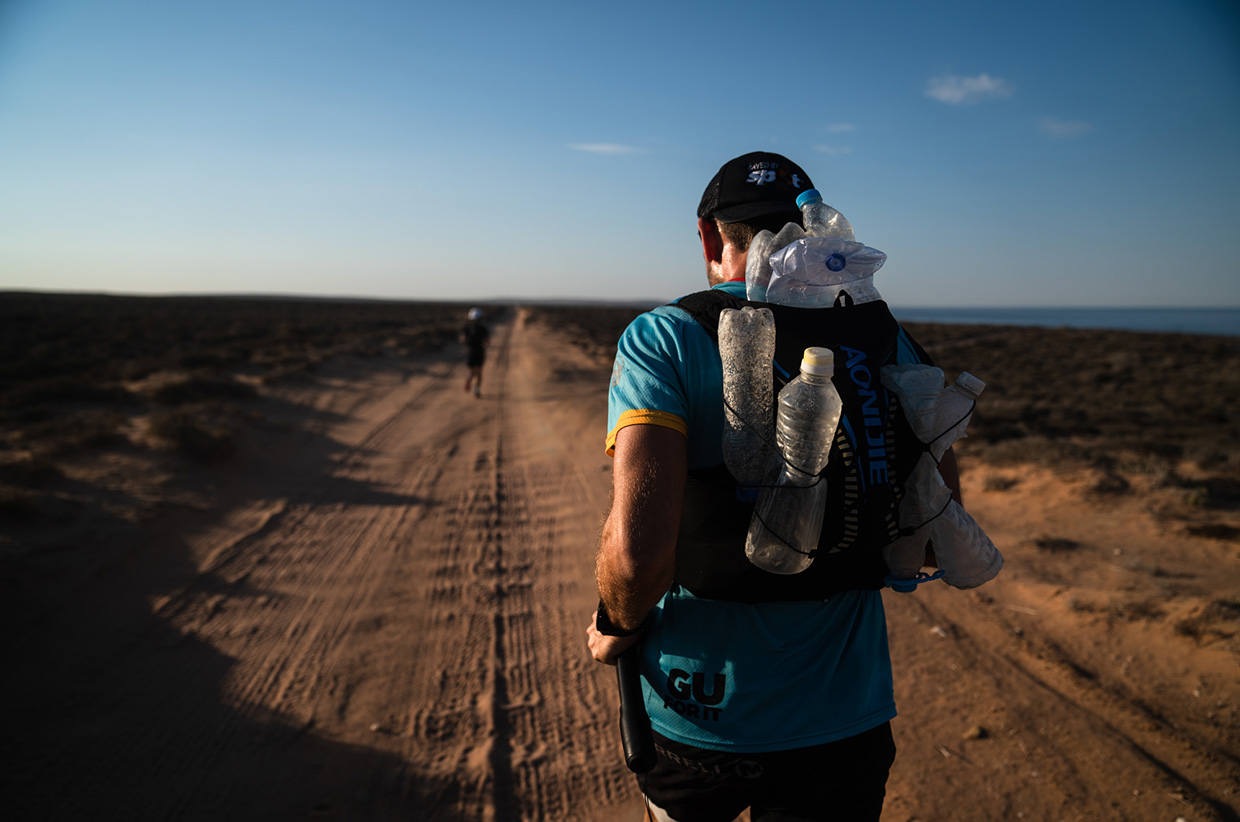 It felt so good to use running as a form of activism. At its simplest form we were exercising freedom of movement, and how its restriction is a problem for all species. Officers swooped in quickly as we dropped down to the beach. They monitored us from a distance before calling us off. We kept things cool, and tried to get them to answer questions on the legality of their operations, but their answers were vague and untrue. We delayed and stalled for as long as we could; legally they could not operate the mine with civilians onsite. A passive fuck you from us. Eventually they made us run up to the road, following in close convoy. We saw the protestors at the office. It looked like they were managing to hand over the Memorandum. With this distraction we decided to continue our run and see if we could explore any of the prospected beaches. On the boundary fence we saw trucks waiting to enter the premises. We had succeeded in shutting down the mine, even if only for a brief time. It was proof that the little guys can have an impact.

The beaches were a massacre. Truck tracks ran far past the high-tide line, killing all life in the sand. Huge tracts of land had been dug up and illegally stockpiled on the shore. Garnet, a mineral used for abrasives, had been lifted to the surface and stained the beach in a blood-red sheen. It was a wasteland – one that the untrained eye may struggle to observe, but after 80km of running across pristine shoreline, and hearing the stories of experts on the topic, this felt like walking across a mass grave.

The team had pushed on and I found myself contemplating a lot over those last 25km. So much had happened in three days. I felt more connected to my environment, and now I was angered to witness it being manhandled before my eyes. The general manager of the mine flew past in his four-by-four, only narrowly missing my elbow. It felt good to be under his skin.

It seems like secrecy is a tactic used by all, good and bad. But in the end it doesn’t benefit anyone. We need to encourage a sense of value, and as Mike understood, that can only happen when people realise what they have to lose. So next time you see someone in a strange place with a smile on their face ask yourself: what am I not seeing? There’s a chance it won’t be there for much longer, unless you get involved.

Out West For the Love of the Game 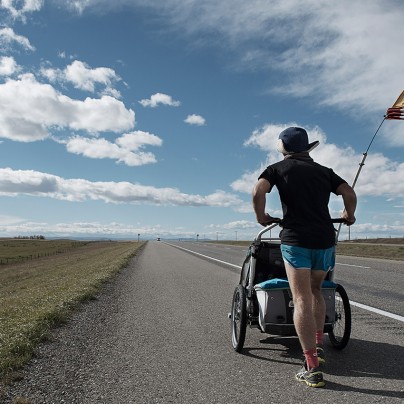 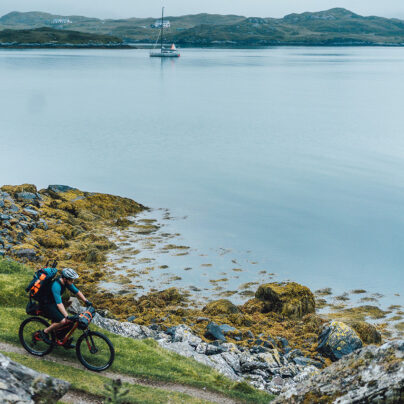 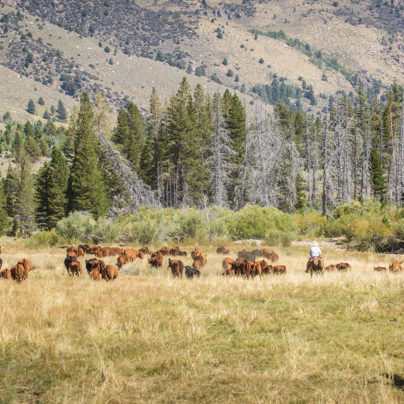 Into The Old West Jess McGlothlin