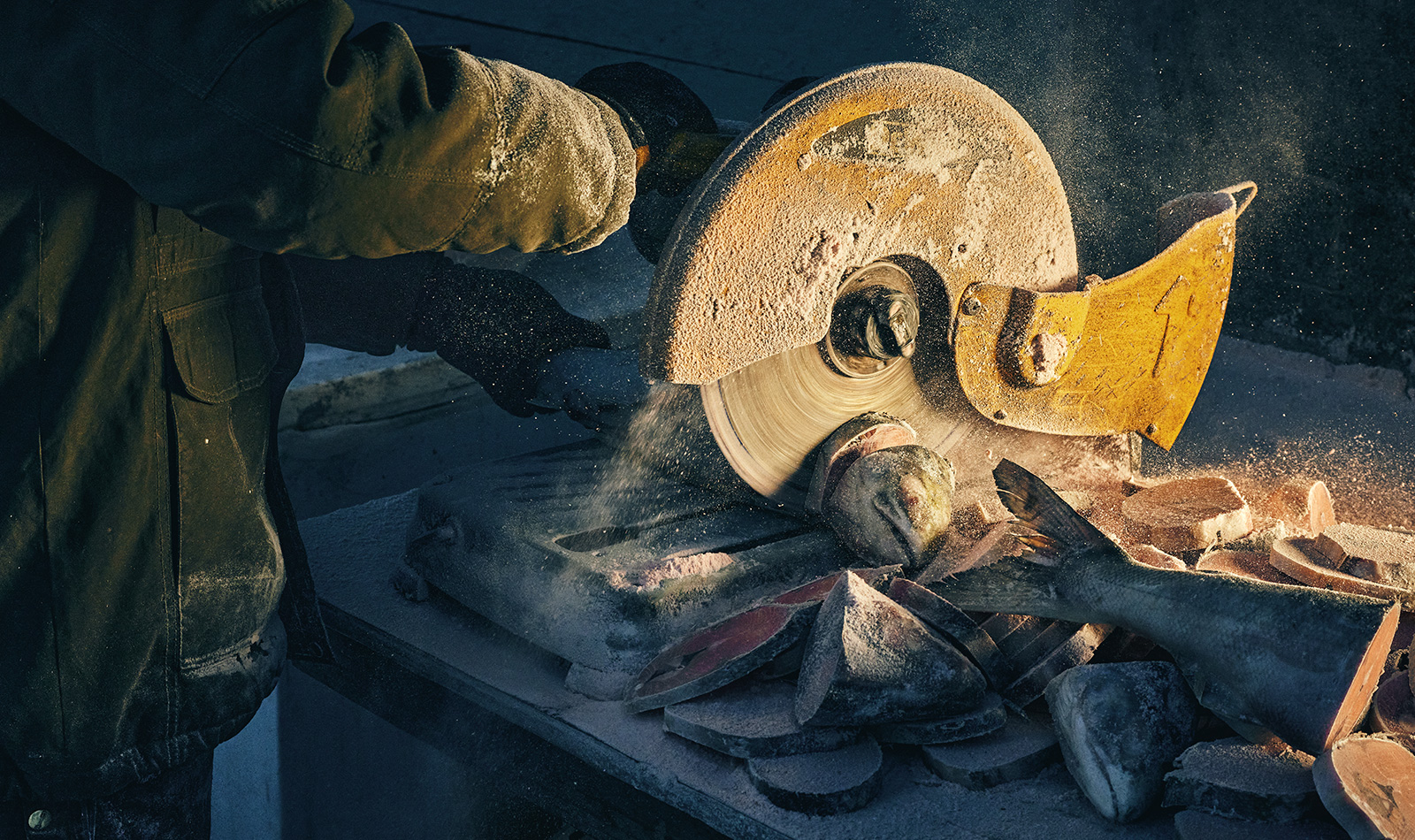 Frozen pink crystals began falling, salmon dust coming off the chop saw, coating everything the way frost covered every surface that morning as we departed Anchorage, Alaska, and headed northward, out of the city, for about an hour. As the fog lifted the frigid city was left shining.

‘The world’s our freezer this time of year,’ Anna said, grabbing half a dozen keta salmon from two massive boxes that held an entire ton of frozen fish outside their workshop. She placed them next to the chop saw, also stationed outside, and made quick work of it. Alongside other odds and ends stored in the -15°F chill were a small box of cut horsemeat and a Thanksgiving-sized turkey, all kept pristine in the frost. Since everything was frozen solid, only the faintest of fish smells was discernible.

Anna manned the chop saw, wearing work gloves, a large parka, coveralls, and safety headphones over her wool hat. The work was loud, but you could still hear 60 Alaskan huskies barking, yipping, and howling above everything. They knew exactly what the shrill of the saw meant. So did the resident bald eagle, circling above, never known to have swiped anything but still interested in getting a look. Frozen salmon pucks were dropped into two five-gallon buckets – heads, tails, and all. Kristy joined Anna in carrying them over to the team, the entire kennel jumping and shouting to make sure they all got their fair share. For the dogs, the excitement of food is second only to the anticipation of a run.

The sisters walked up and down the aisles of doghouses, introducing each dog as they handed out the snacks. ‘These guys are from the troublesome litter: Mayhem, Chaos, Havoc, Rampage, and Ruckus.’ Immediately their individual personalities were apparent. Some wanted to know all about us visitors; a few ran their food into their barrels protectively; others were shy and didn’t like strangers watching them eat. Once the excitement wore off and bellies were full we watched them plop down, one by one, in the snow outside their warm homes, clearly more content in the freezing temperatures than we were. But it wasn’t the dogs that had brought us out here.

Anna manned the chop saw, wearing work gloves, a large parka, coveralls, and safety headphones over her wool hat. The work was loud, but you could still hear 60 Alaskan huskies barking, yipping, and howling above everything. 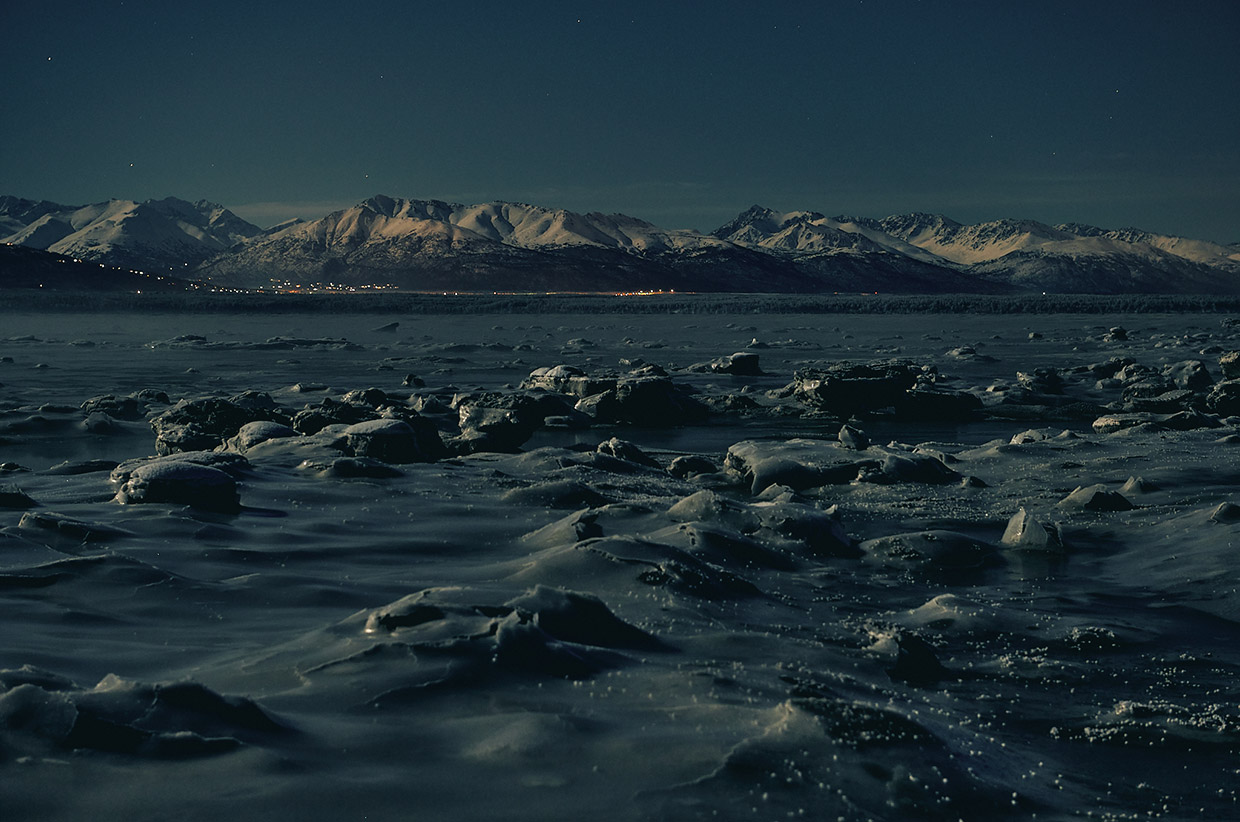 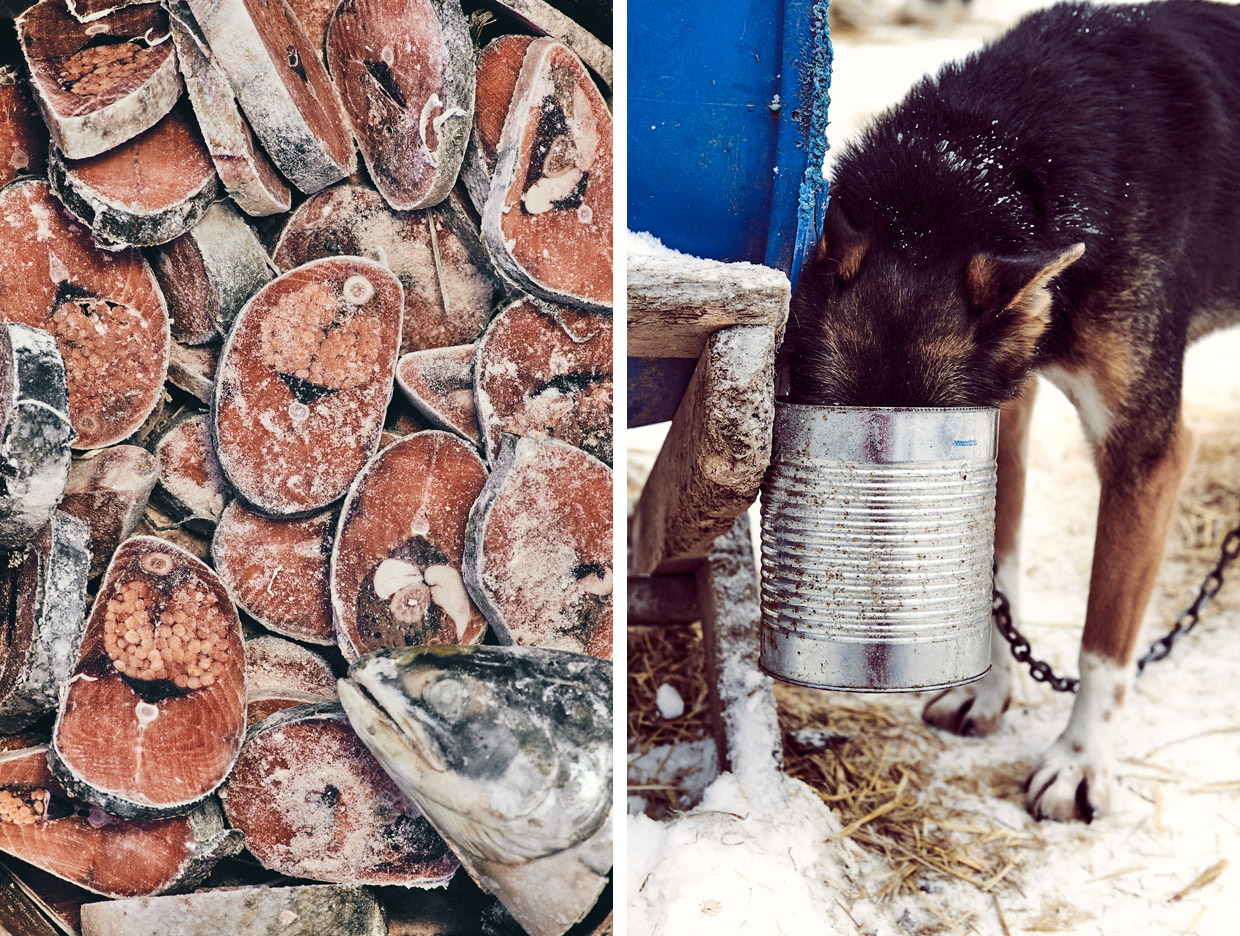 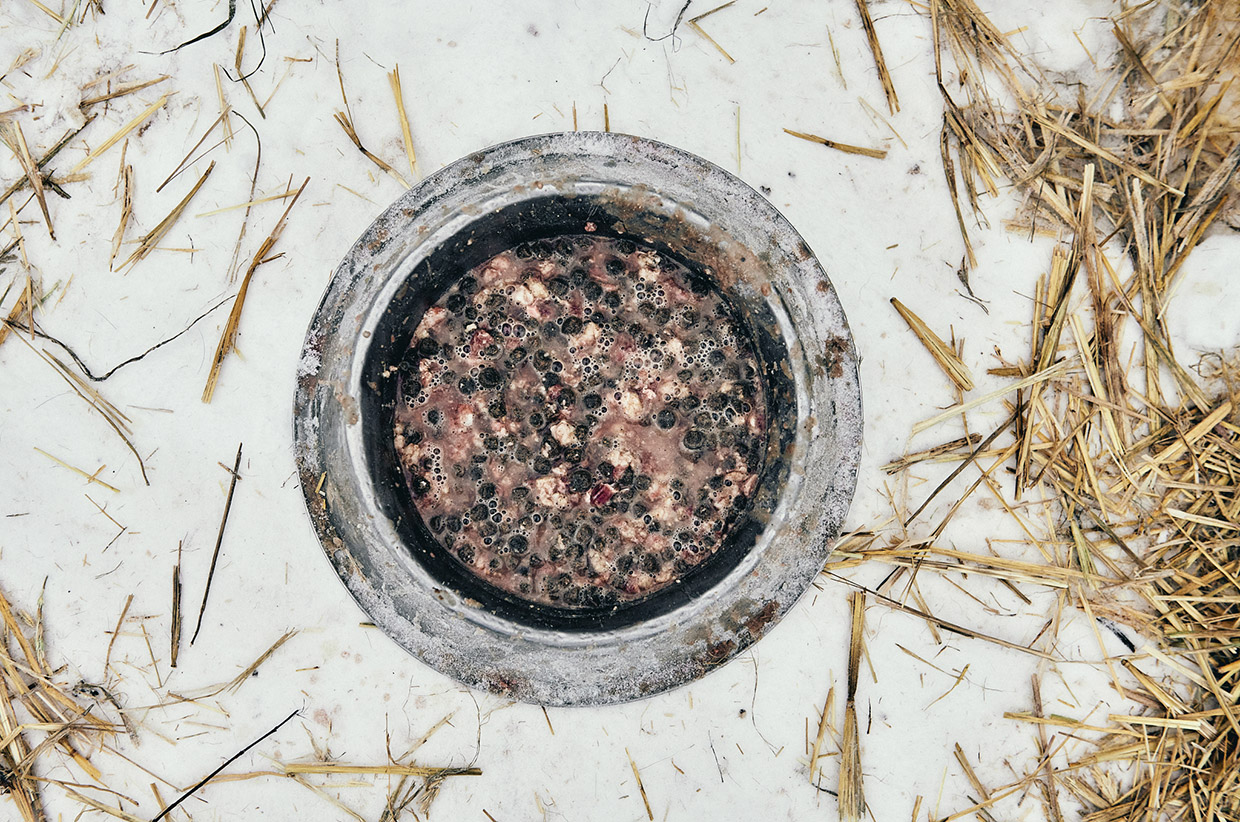 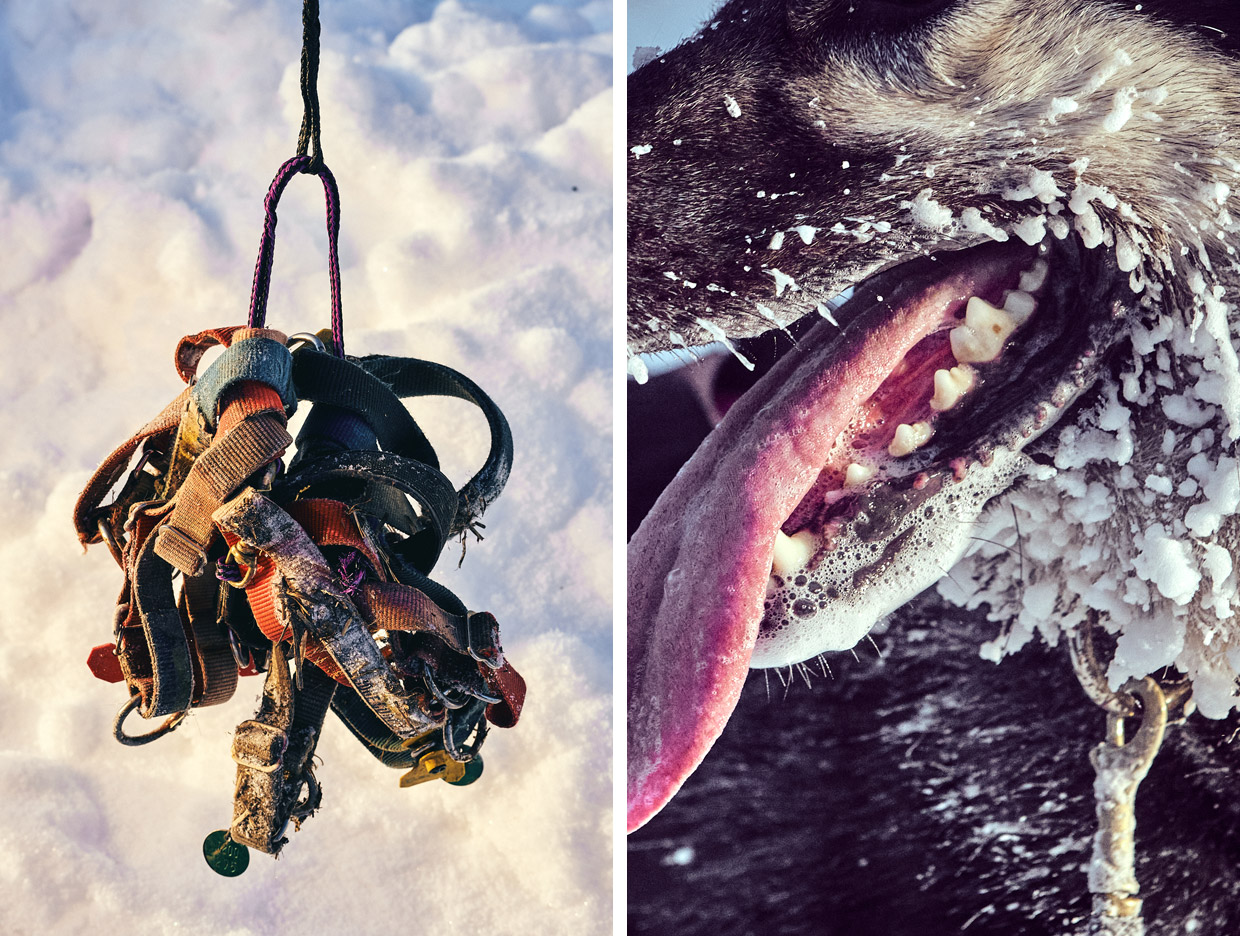 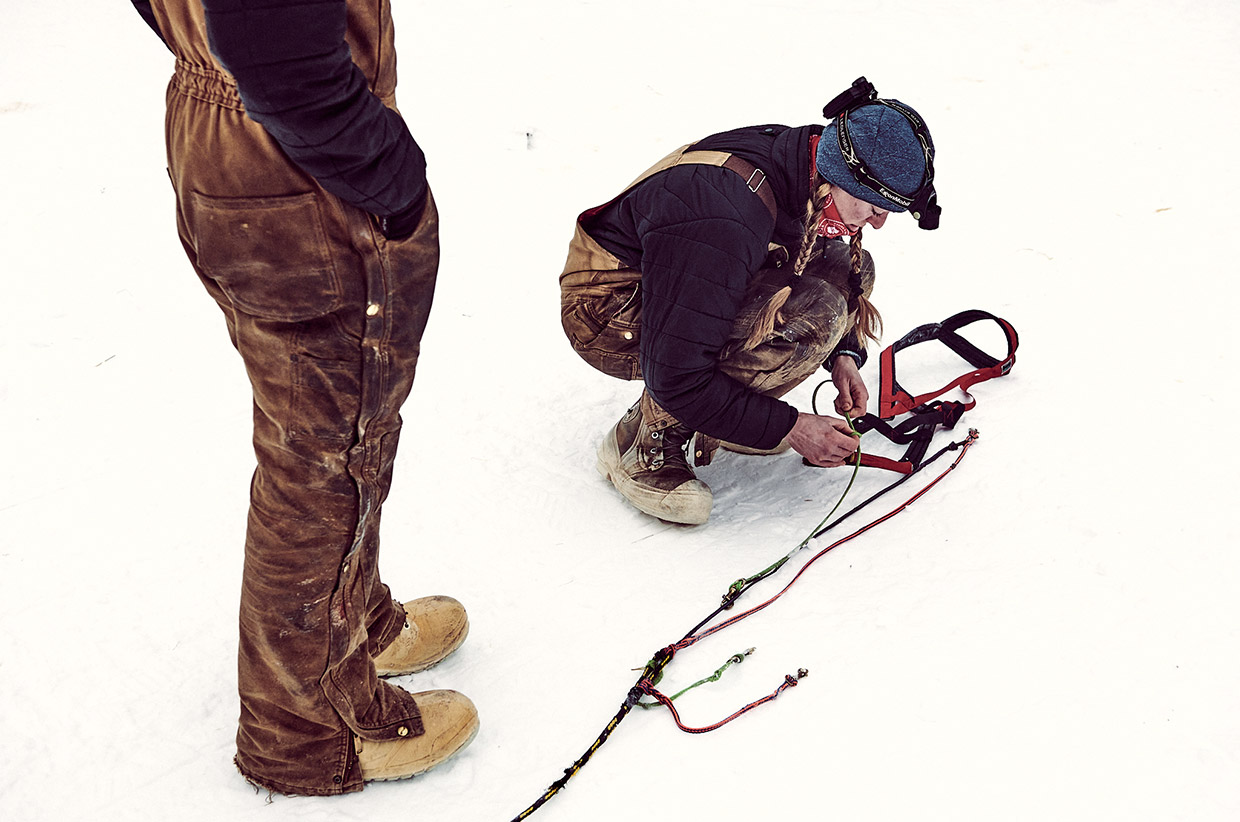 It’s orchestrated chaos, excitement, and fidelity. It’s 17 individual minds and hearts racing at top speed. It’s full devotion to the dogs above yourself, no matter how you’re doing or where you are.

Endurance races are often thought of as quiet, solitary sports – travelling in silence for hours or days at a time, alone with your thoughts and only yourself to look after. Dog mushing is anything but that. It’s orchestrated chaos, excitement, and fidelity. It’s 17 individual minds and hearts racing at top speed. It’s full devotion to the dogs above yourself, no matter how you’re doing or where you are. Whether you’re at home Sunday morning and just want to pull the covers up tight, or you’re on your eighth day of the Iditarod during an endless ground blizzard.

We came to meet the people who had chosen this lifestyle for themselves. In early January we took the snow-covered roads out of Anchorage and up to the small town of Knik. As we turned down a driveway marked by a wooden tripod, the surrounding forest gave way to a lively kennel, and Anna and Kristy Berington welcomed us outside their log cabin. At only two in the afternoon the sun looked like it’d been setting all day. The cabin, tin roof sharply angled in anticipation of snow, wood-burning stove ablaze, was a cosy refuge, but the identical twins seemed more comfortable to stand outside chatting, frost on eyelashes, than to go back in and take their layers off.

The Beringtons have completed 18 Iditarods between them, raced in -65°F temperatures, through hurricane-force winds, and across frozen boulder fields devoid of snow where the sled brakes don’t work. Both are completely devoted to their dogs, the first of which was won in a bet. Caring for those dogs takes about 80 per cent of their waking hours. ‘Even if you’re sleeping you’re dreaming about them sometimes!’ Anna added.

They led us around the forest-ringed property as we peppered them with questions. The heart of the property was behind the cabin – a yard with the 60 dogs’ homes, lined with hay and organised in neat aisles. 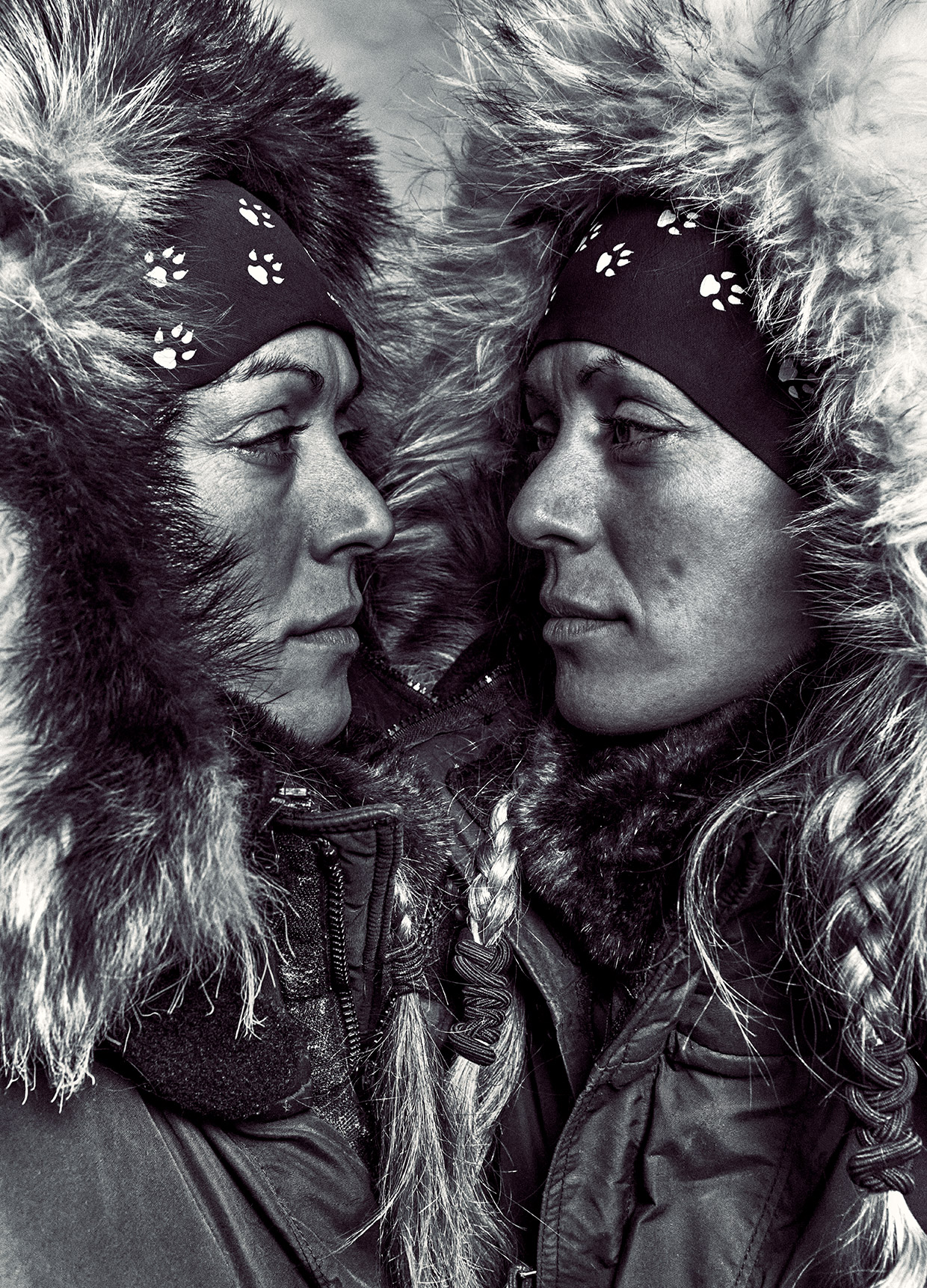 We were curious about their lives outside race season. Rather than looking forward to a long, quiet down season after the winter races are over, they’ll start their own training to keep moving. ‘You’re so committed to training the dog team,’ Kristy said. ‘To go from that intensity to nothing is really difficult. When the Iditarod and puppy training wraps up, and the snow starts to melt, we shift gears into our own training. It’s extremely motivating, and it helps you move on to the next thing. It can get a little depressing when the snow starts to melt.’

Out in the yard was a small, three-sided wooden structure where the dogs’ harnesses and ganglines were hanging, frost-covered sleds stationed in front. Anna and Kristy make their own sleds by hand so they can fix them when something breaks.

We asked to see the trailer used to transport the dogs. Parked at the back of the property, it had cubbies for each dog in the rear, and up front were shelves for the sisters to sleep on during longer hauls. Anna and Kristy gingerly lifted each 50lb dog up and into their cubbies until the whole team was in place for us to see. Then they lifted them all back out; the dogs seemed confused as to why their outing was cut short.

We wandered back towards the cabin. In late summer or early fall, the sisters told us, they’ll start taking the dogs out on short two- to four-mile runs, pulling a four-by-four in neutral until there’s snow. By January they’ll work up to runs as long as 100 miles, generally taking the dogs every other day. While training for the Iditarod each dog will log over 3,000 miles.

The most surprising thing these trail-hardened women shared was what they considered the hardest part of their lifestyle. ‘Seeing our dogs age, from puppies up through their athletic careers to see them slowly having a hard time doing what they used to do all the time,’ Kristy said.

We eventually made our way inside the cabin and were greeted by another dog, a long-retired husky, ambling around in a hunter orange warming vest, his racing days long behind him. ‘They don’t know their age,’ Anna added. ‘They can be twelve years old and still all excited and want to go running with you because they think they’re five, but they don’t know they can’t keep up with the team. They just love running.’ 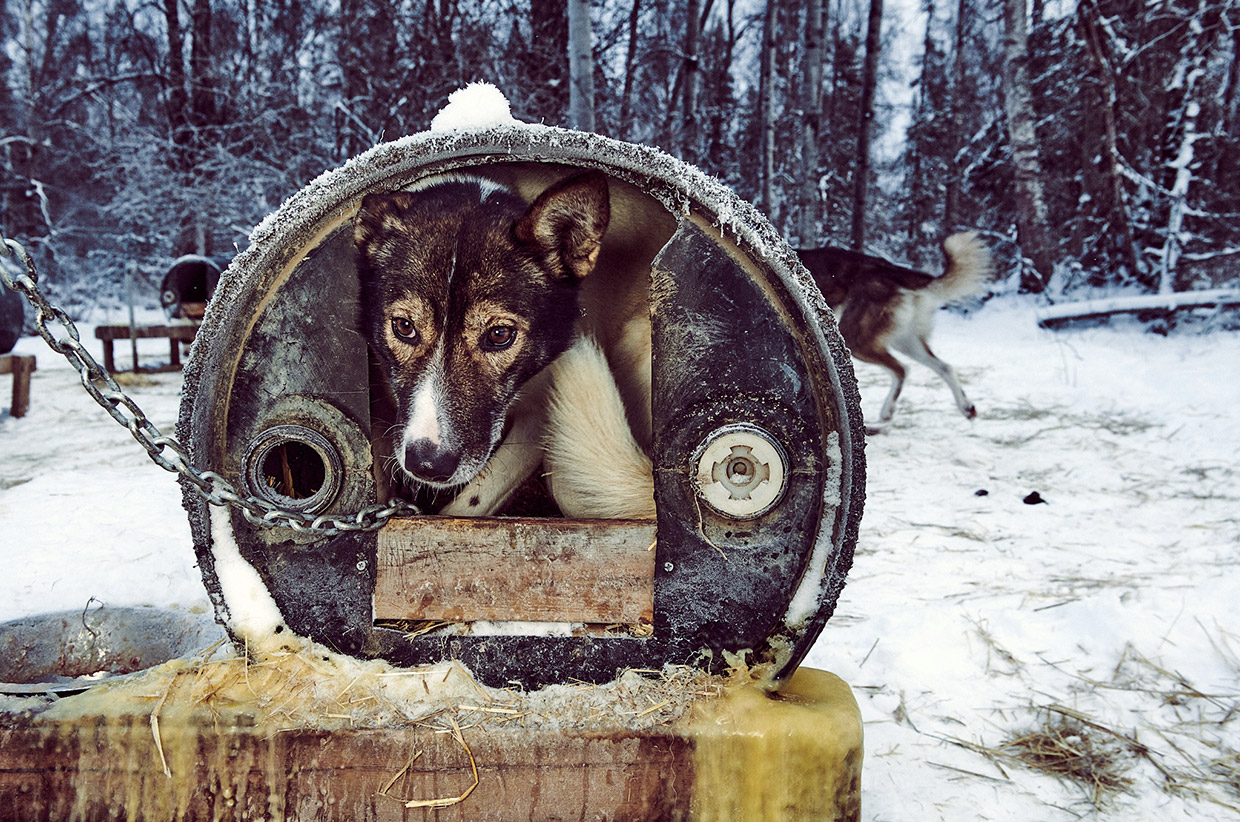 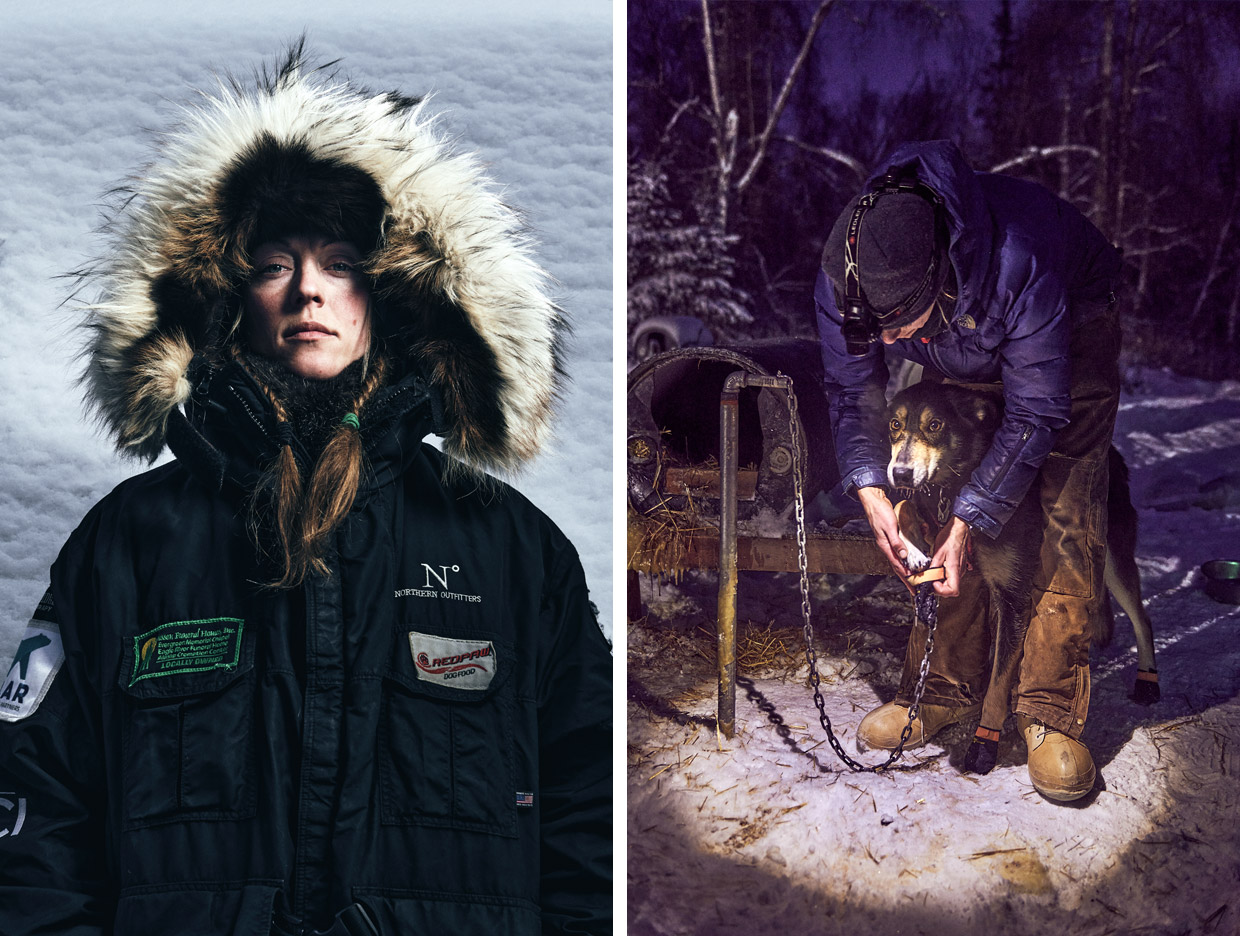 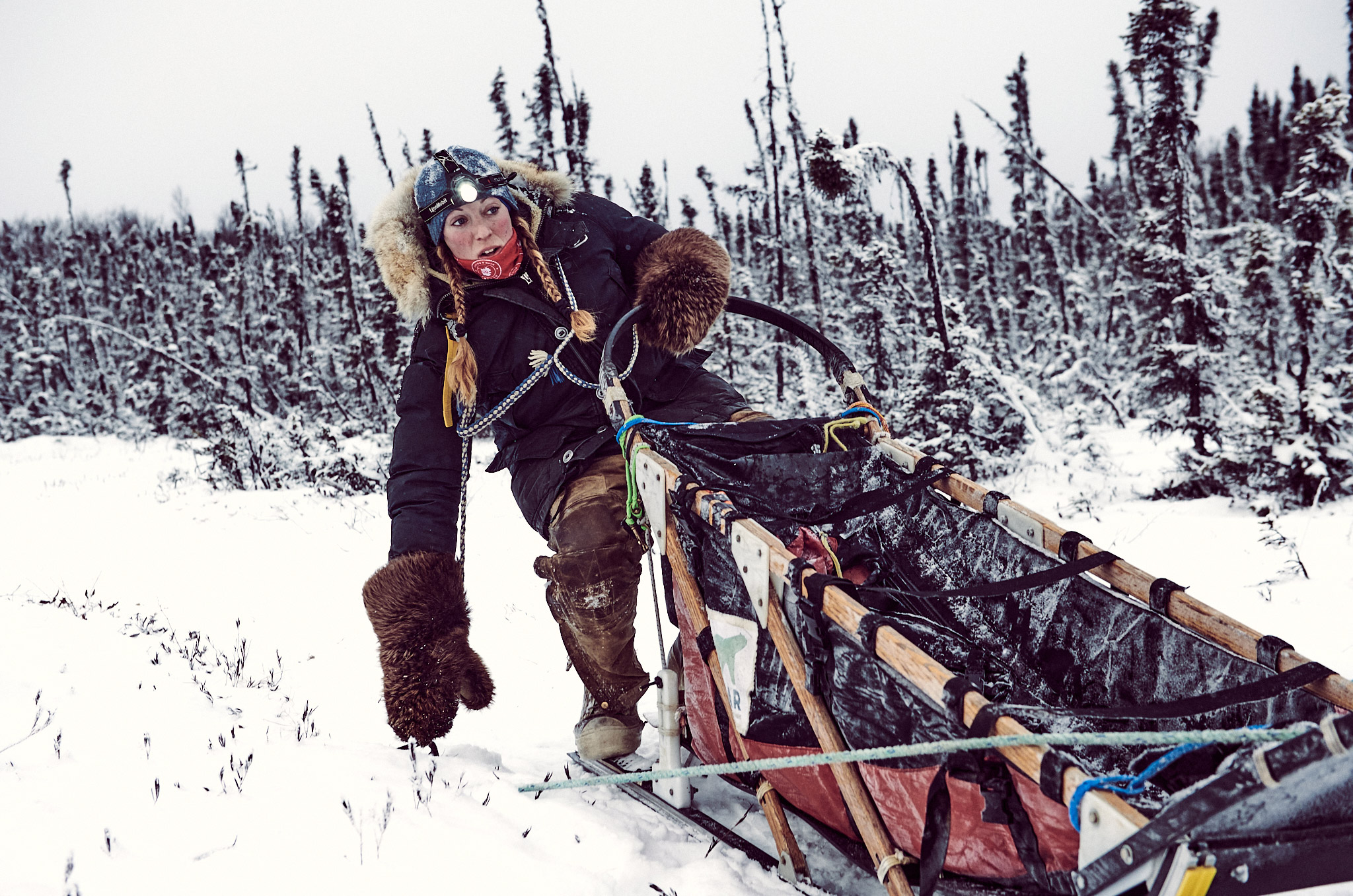 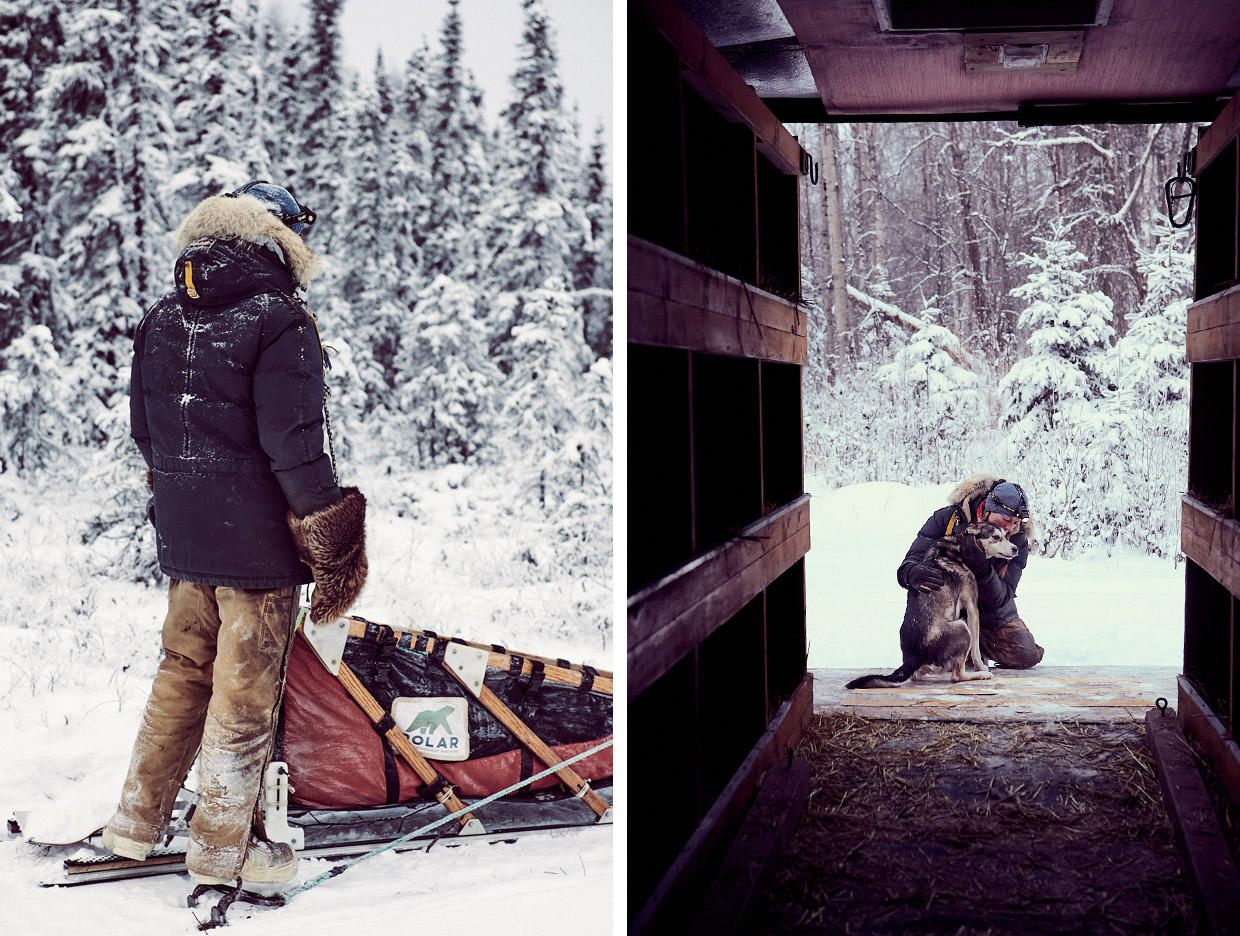 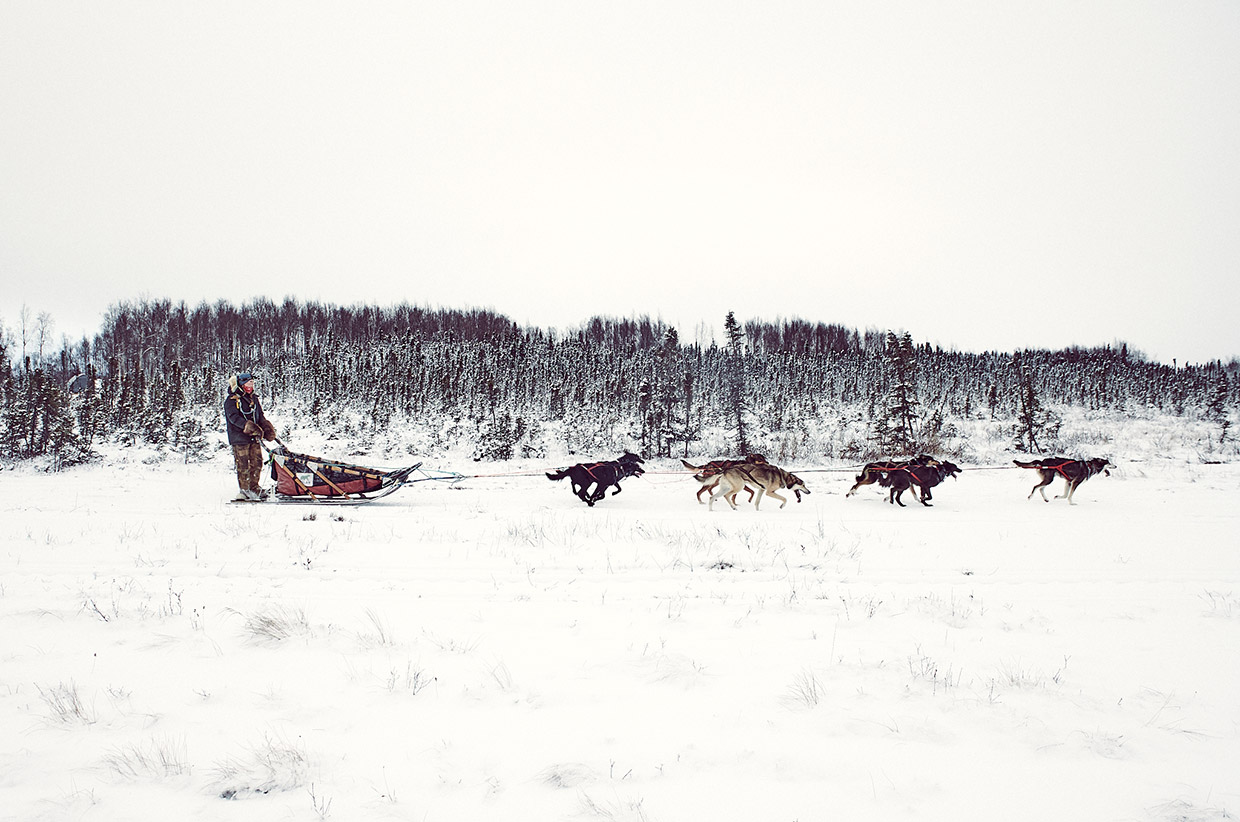 The lead dogs don’t calm for a moment. Once the harnesses are on they’re in full drive mode, and it doesn’t stop until they come off again – they’re jumping in the air with anticipation, narrowly avoiding tangling each other up over and over.

Long after the sun disappeared below the horizon, Anna and Kristy ready two dog teams for a run by the light of their head lamps. They operate without a word, seamlessly weaving between each other and the dogs, complementing each other in every way, instinctually knowing the other’s needs – a sharp contrast to the dogs surrounding them, who are going berserk in a chorus of overflowing excitement. ‘Pick me! Pick me!’ Everyone begs and pleads to go pull. From puppies up to retirees, no one wants to be left behind.

As Kristy begins gearing a dog up, we watch the animal instantly calm and pay full attention to her. She delicately slips each paw into a bootie and secures it with her bare hands. Neither sister is rushed by the cold or hurried by the dogs’ excitement. The instant she moves on to prepare the next dog the first erupts again.

They bring the lead dogs over and connect them to the front of each gangline. The lead dogs don’t calm for a moment. Once the harnesses are on they’re in full drive mode, and it doesn’t stop until they come off again – they’re jumping in the air with anticipation, narrowly avoiding tangling each other up over and over. Within moments both teams are assembled. Anna gives the command ‘Ready, all right!’ while pulling up her anchors, and the first team is gone, down the wooded trail off the property. Kristy calls out and is gone too. Immediately the cold, quiet night envelops them.

All the dogs left behind listen in the crisp night air. After a quiet beat they erupt into long, sorrowful howls. It’s not the happy, excited yips from earlier, but a song of deep longing. The remainder of the kennel join together in unison and sing their ‘come back to me’ song, and as I stare down the trail I find myself standing alone in the dark. The energy feels as if a storm just passed through. 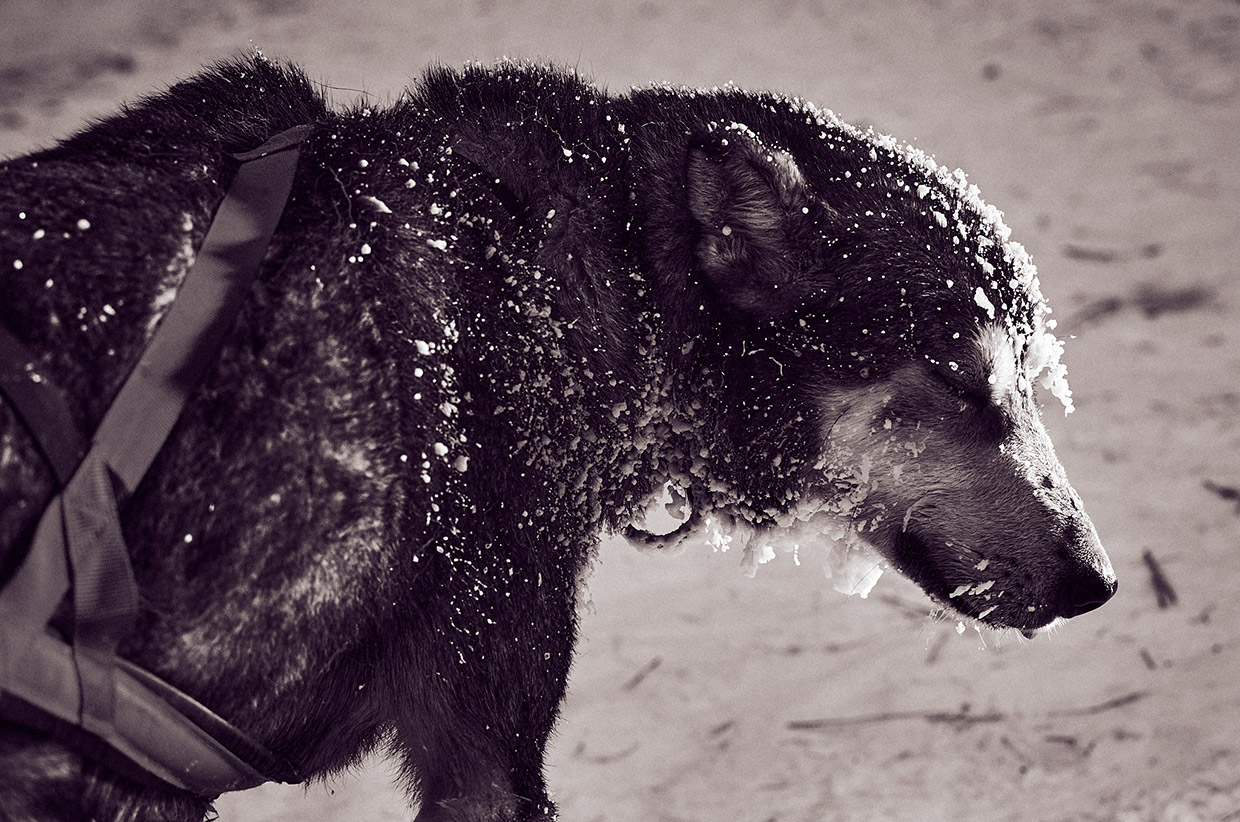 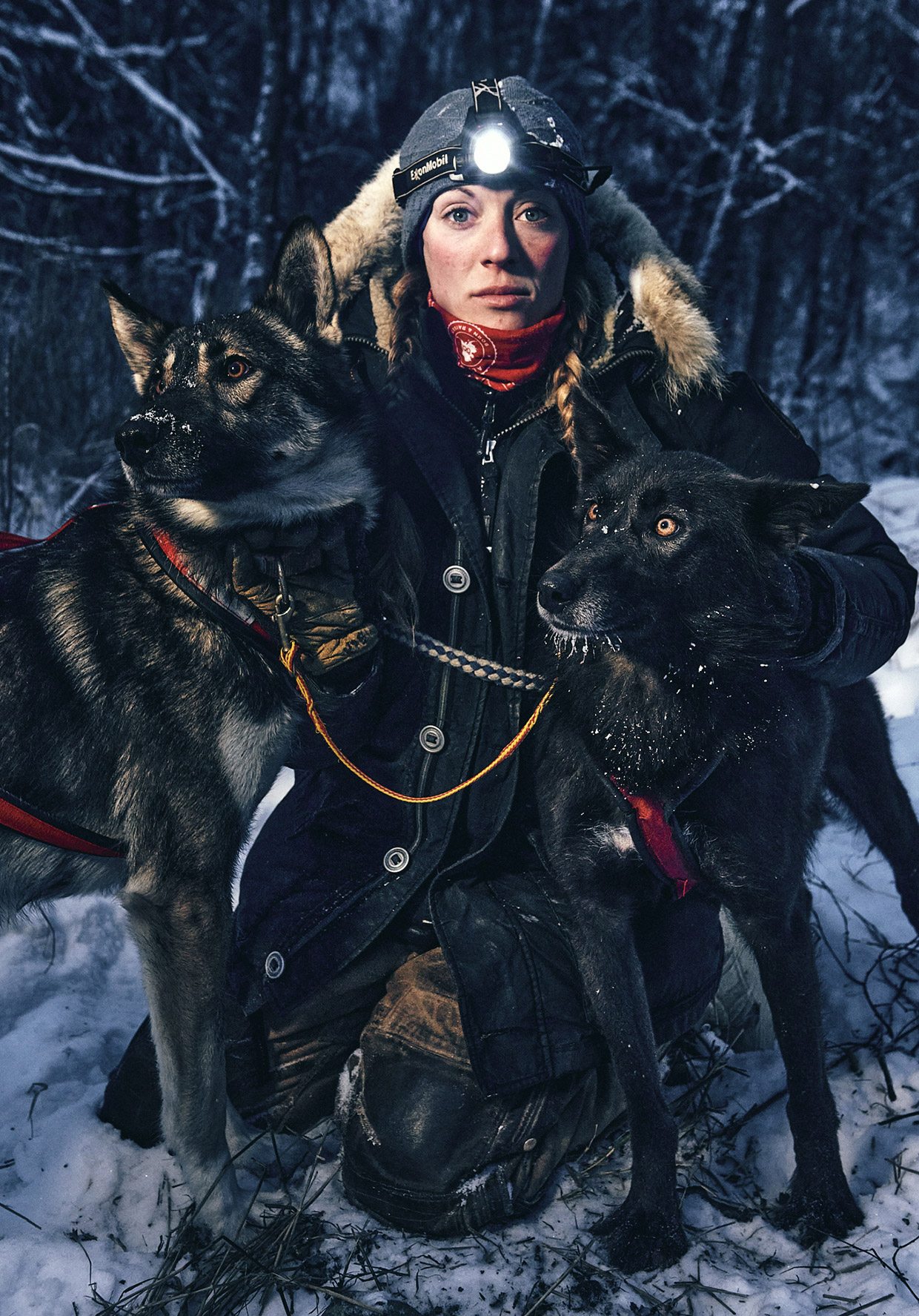 It’ll Have Your Bones Slowly, Slowly 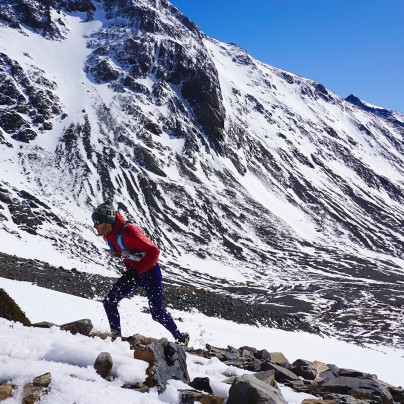