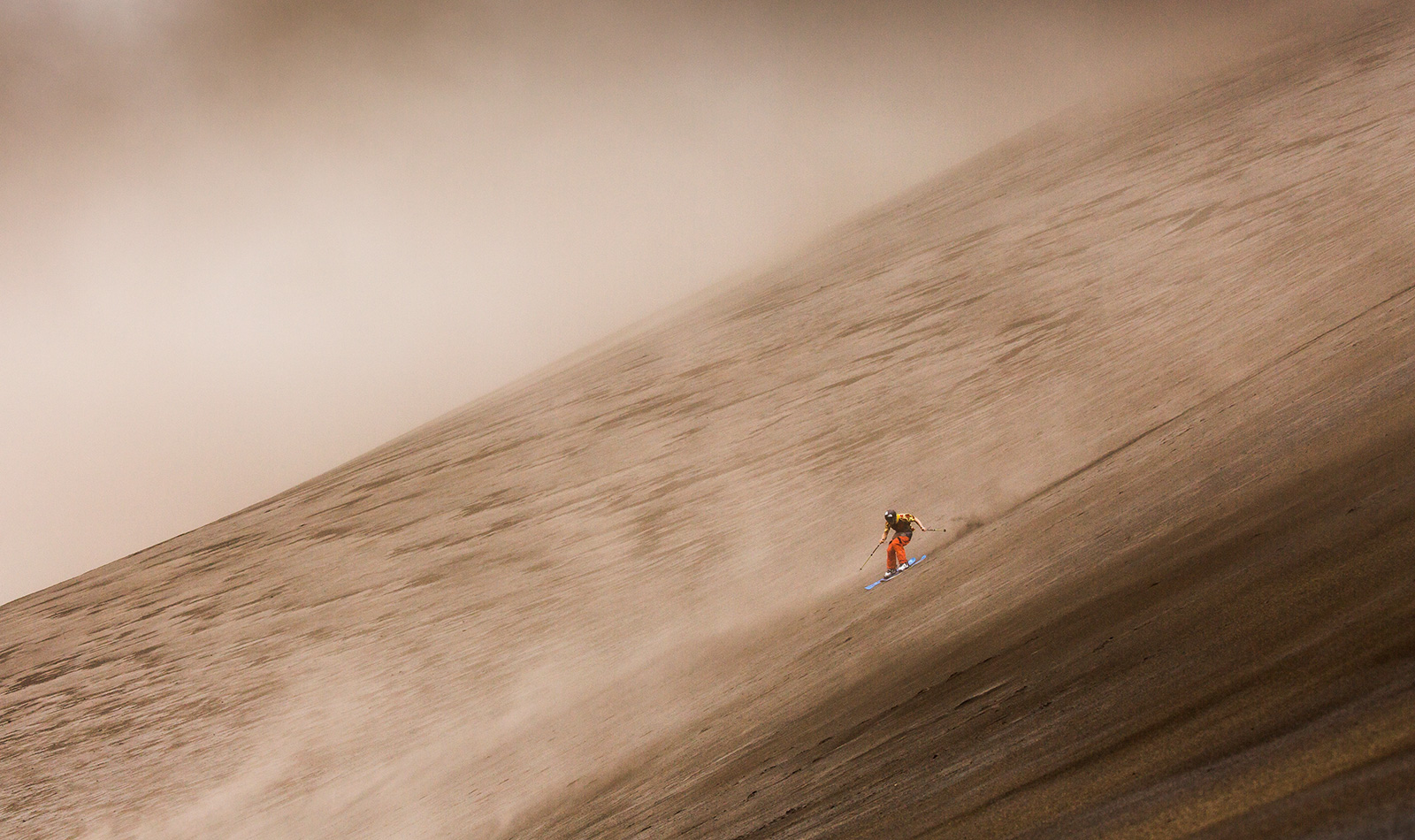 Mount Yasur is an active volcano on Tanna, one of many small islands that make up the Republic of Vanuatu in the huge expanse of the South Pacific Ocean. Standing 361m above the sea that surrounds it, Yasur is modest in height, yet it somehow defines the island. It was the glow coming from this active volcano that first attracted Captain Cook to the island in 1774, so the story goes. Some 250 years later, Yasur retains its draw on visitors, from tourists to those looking to test themselves a little further.

Sam Smoothy stands on the black ash that makes up the summit slopes of the volcano. Below him, mountain flanks roll down to verdant jungle and ocean stretching to the horizon. The sight of humans on this seemingly hostile lump isn’t unusual – it is one of the most accessible active volcanoes in the world. What is unusual, though, is that Smoothy now places two skis down on the ash. His backdrop looks like a photographic negative. Black replaces white, the micro-topography mirroring his more usual snowy environment. Smoothy punches his boots into their bindings, turns towards the sea and begins his descent, kicking out plumes of fine powder.

Stepping outside the ordinary is something of a habit for Smoothy. Whether it be competing at the highest level on the Freeride World Tour, or opening up new lines in distant mountain ranges, he is constantly chasing contrasts and new experiences. This, though, is his most unusual trip to date.

Sometimes the best ideas burst into our consciousness when our mind is otherwise engaged. For Smoothy, it was while he was doing hard labour at the home of fellow rider Xavier de Le Rue, in the south-west of France.

‘I was at Xav’s house in Capbreton and had been chatting about a summer surf trip to some tropical paradise. Xav had me painting his house so I had plenty of time to think. I had seen footage of this Kiwi guy skiing on ash before and it just sparked me right up,’ Smoothy explains. ‘Like me, Xav lives for travelling and exploring new places, and finding fresh perspectives on our sports. When I shared the idea it sparked his interest, so we kept talking about it. The more we talked, the more a seemingly silly, impossible dream made a lot of sense.’

It takes drive and dedication to turn an idea into reality, and The North Face provided manpower and support to help the duo to create a film of the adventure. What was originally the seed of an idea in one man’s mind quickly became a full-scale expedition.

Stepping outside the ordinary is something of a habit for Smoothy. Whether it be competing at the highest level on the Freeride World Tour, or opening up new lines in distant mountain ranges, he is constantly chasing contrasts and new experiences. 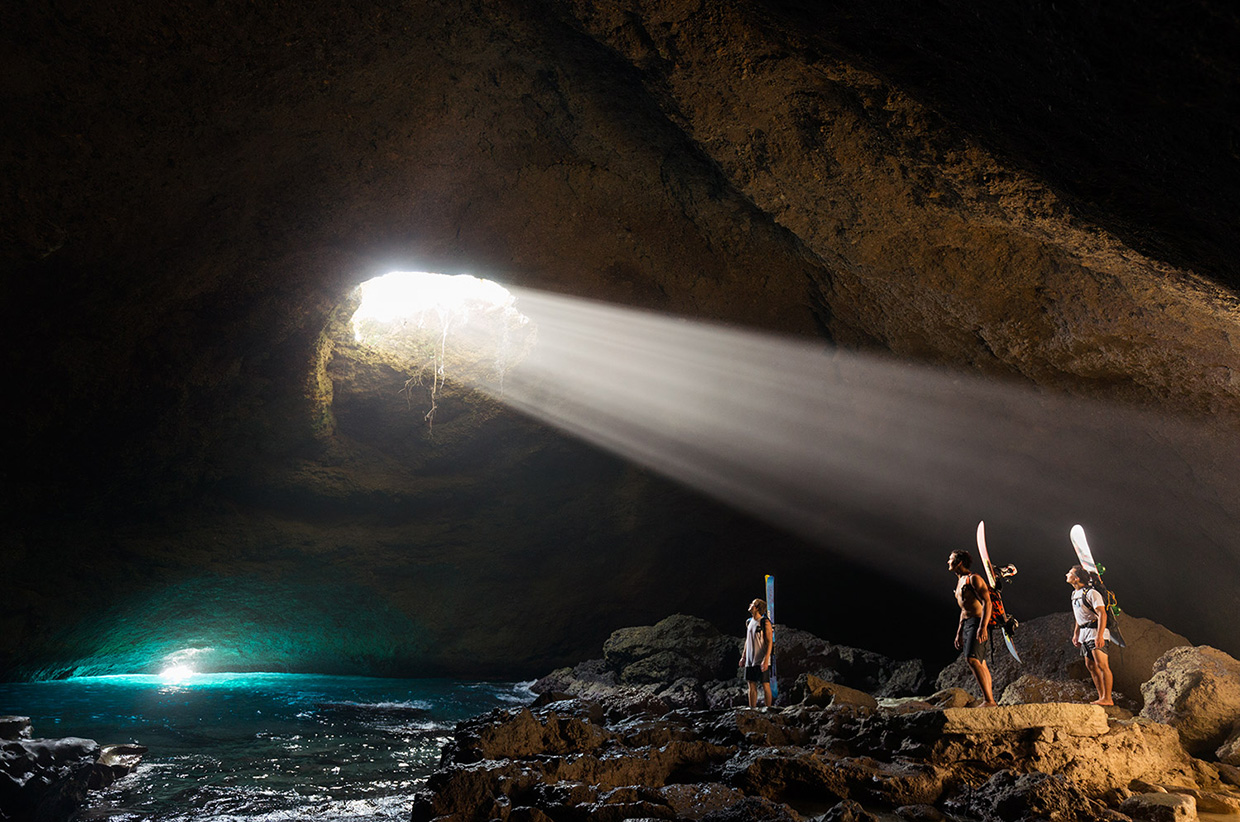 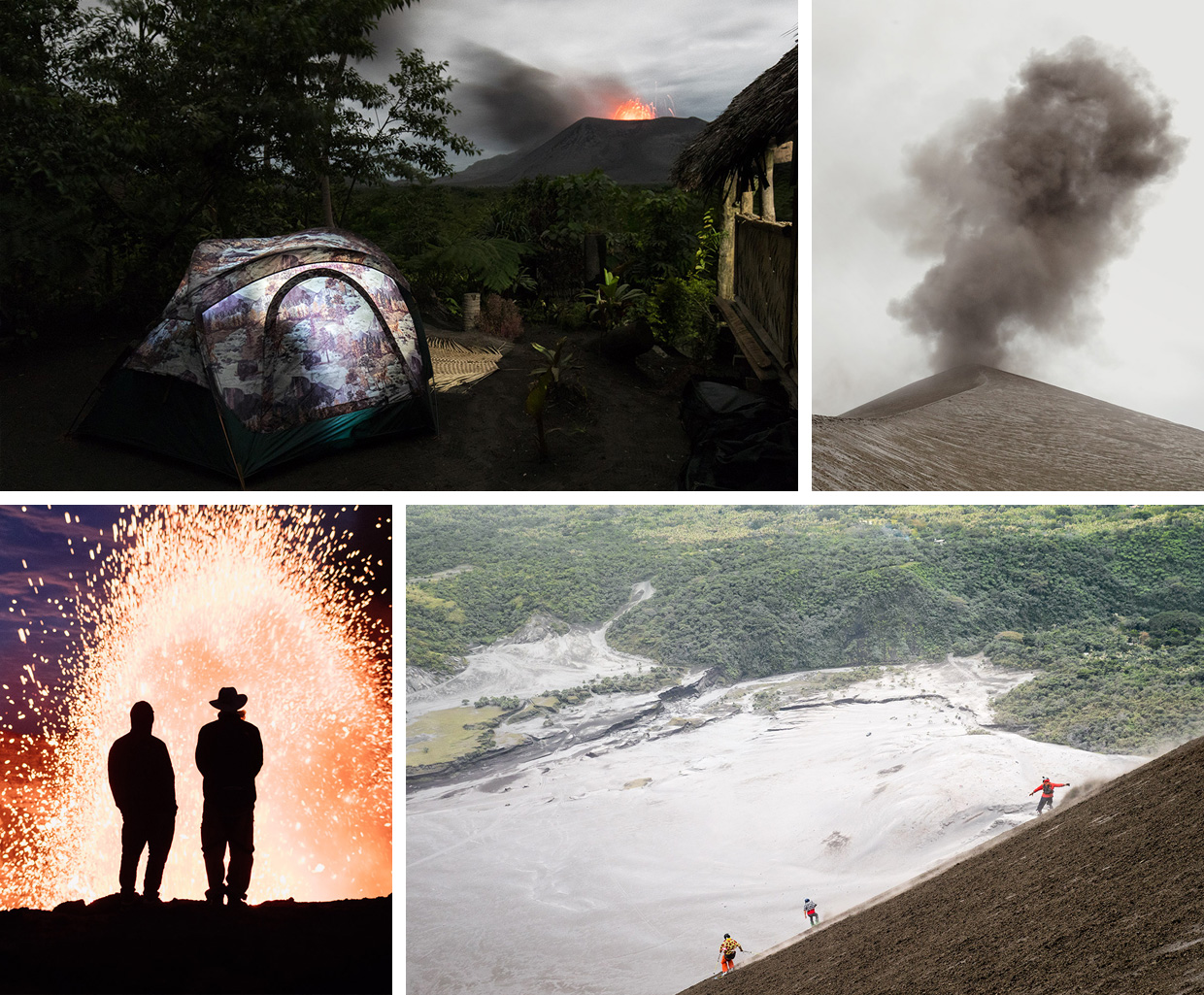 A howling wind made walking tiresome, and the volcano was exploding. Despite knowing that it always does this, my instincts were to flee. I was super nervous of being clipped by flying molten rocks! It was such a primeval place to stand.

After arriving on the island before the rest of the crew, Smoothy set about exploring. He found not only an alien landscape but also a welcome from the local community. He recalls the reception the team received with warmth: ‘The locals were a huge highlight of the trip for everyone. We had been told to expect the happiest people in the world and I honestly think they were. They were so friendly, especially Fred and his family at our campsite – we felt part of the family! Fred’s mum would make the best dinners with fresh produce from the jungle all around us, which is how they seem to live day to day.

‘Frankie, Fred’s son, followed us around the whole time and kept us laughing with his hilarious antics. He was always taking our gear, putting it on and parading around the place; he had so much charisma, it was crazy! I think the locals thought skiing was pretty strange, and I know they thought we were pretty strange as well. They were so used to the volcano erupting it doesn’t even phase them, and they seemed amused at how impressed we were with it.’

While the locals may have seen the volcano as part of day-to-day life, Smoothy and the rest of the team were still in awe of it. Approaching through the jungle, the landscape quickly changed character.

‘Tanna Island is incredible. it’s so raw and aggressively beautiful; I was definitely picking up a Lost World vibe, especially once we got out into the jungle. The jungle is so lush and green and grows so virulently, but around the volcano the green is muted by a thin layer of ash. I was sitting on the back of a pickup truck and we came out of the jungle and there it was, this huge pile of doom in the middle of an ink-black plain, just spewing ash clouds and rock into the sky. It was pretty intimidating and I knew right then that this was not going to be as easy as I thought!’

Smoothy’s first venture up the volcano, all alone, was the most memorable.

‘A howling wind made walking tiresome, and the volcano was exploding. Despite knowing that it always does this, my instincts were to flee. I was super nervous of being clipped by flying molten rocks! It was such a primeval place to stand. Alone on the lip of the crater, looking down on the beautiful violence deep inside, I was worlds away from my comfort zone – but this was what I was seeking.’

Pointing his skis downhill was only the beginning, though. Getting down the mountain was as much a battle as it had been to reach the top. Equipment designed for snow fought its new terrain, and combined with the objective risk of flying molten rocks, poisonous gases, and dust clouding visibility, every turn was hard won.

‘Sadly the skiing was nowhere near as good as snow, so there goes that solution for our changing climate! Everything is slower, you have to be careful not to catch an edge, and also you have to dodge the rocks – which I guess is kind of like skiing. But it’s just slow from the increased friction on your ski bases. It was also really hard on my legs to hold everything in control. My thighs would be burning from halfway down and screaming at me to stop. Xav had it even worse. I think his board just had more friction, and was easier to catch an edge on. He crashed hard, but he’s Xavier de Le Rue, and a pit bull. He would just keep getting up and keep ripping.’ 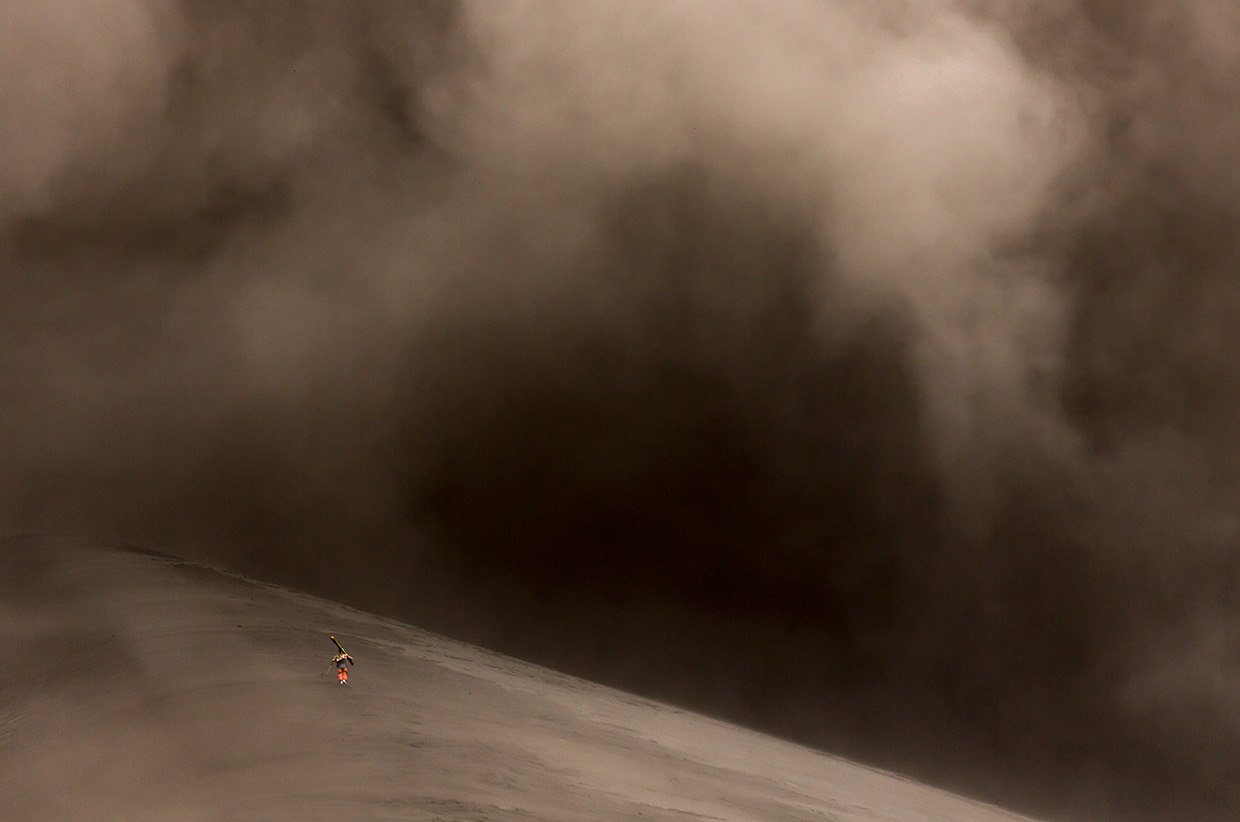 Days of shooting in the harsh volcanic conditions took their toll on kit as well as bodies. ‘My skis were totally ruined, ground down to the core. I left them with Fred who ran our camp near the volcano as he thought they were neat,’ Smoothy recalls. ‘Goggles were hard to see through, exfoliated by the windblown ash. The drones got pretty beat up trying to fly through ash clouds but the worst was the cameras. The lenses got scratched, all the focus rings were barely turning, just stuck hard with grit and ash; everything had to be sent away to be cleaned as they were nearly stuffed.’

The filming schedule magnified the intensity of the experience. It drove the team to keep revisiting those ash slopes, looking for alternative perspectives, constantly in awe of the visual feast the landscape provided. ‘Obviously filming a trip like this brings a lot of extra work and problems, things you wouldn’t normally do and different ways of seeing an activity. If there had been no cameras there would have been more time to relax and enjoy the quiet life in Vanuatu, but everyone was so fired up on the crazy images we didn’t want to miss a thing.’

As the week was drawing to a close, the volcano wore the whole team down as it did their kit. ‘There was definitely a feeling of achievement, which at the same time felt pretty funny due to the small size of the mountain. Once we had the shots in the bag I was incredibly relieved; it was much harder to get things done than I anticipated from the office at home. It meant a huge amount to be able to call this a successful trip.’

Returning to three riders on the ash slopes, fighting their way down as the ground shakes to another eruption, it’s easy to ponder ‘why?’. For Smoothy, it seems to be an insatiable desire to step outside the preconceived boundaries of his chosen sport, a need to answer the question of ‘what if?’. Rather than taking the privileges of sponsored life for granted, he uses them as a vehicle to fuel his voracious appetite for new experiences. In taking that leap, the end experience is not always objectively better, but life is richer for the trying and achieving.

Growing up in Treble Cone, Southern New Zealand, Sam Smoothy has been skiing since he could walk and has since been inspired by the mountains. He has been competing on the freeride circuit since 2004.
Website: www.samsmoothy.com
Instagram: @samsmoothy
Facebook: /sam.smoothy1

Volume Nine I Belong To The Ocean 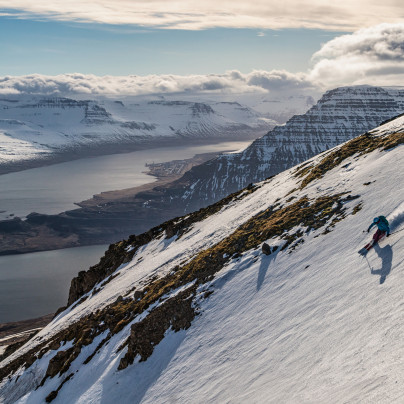 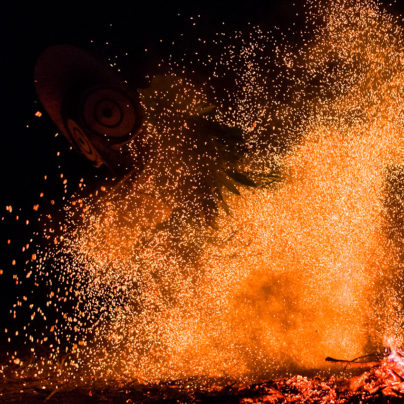 The Art Of Fire Dan Hume 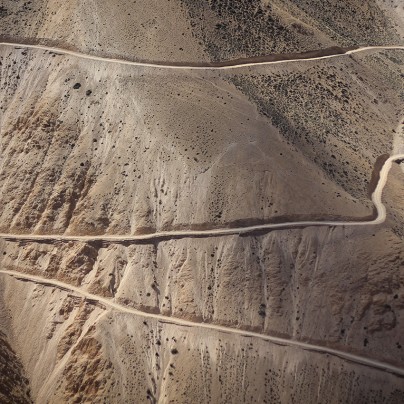 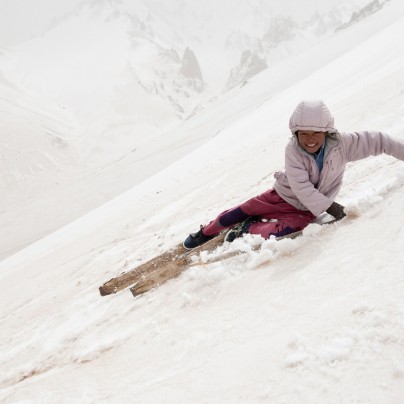