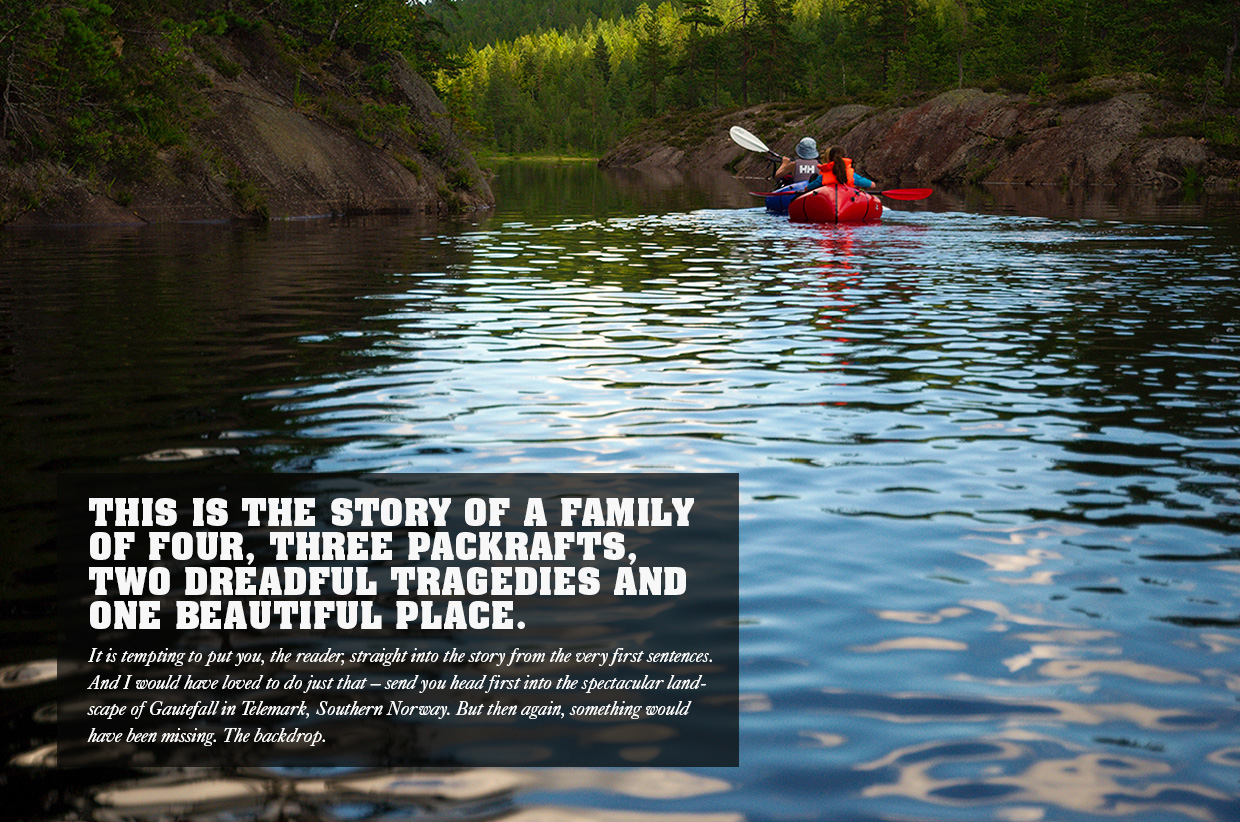 Our maiden voyage along a tiny flooded creek quickly gave way to our first portage down to a nearby lake. The landscape widened, and while distant mountain ranges appeared in the horizon, we started the process of moving away from the dreadful deeds of days past.

We were supposed to have left on a Thursday, but with the prospect of extended flooding due to heavy rainfall, we chose to wait out the weather. Then came Friday 22 July and the incomprehensible events: The bombing of the government quarter in Oslo and the subsequent massacre of young on Utøya. One youth after another, robbed of their lives and their future. It was too much. In the end, we had to turn off the TV and shut down the computer. We could not fathom what had happened and it seemed impossible to leave. With too many questions and too little answers, it was no small task trying to explain the tragedy to our children. Still, we agreed to leave two days later. Not to escape, but to be together, creating a counterweight of warm thoughts.

It was a short train ride from our home town Kongsberg to Drangedal. Nevertheless the landscape changed considerably and, in Gautefall, we were met by a fascinating landscape with large rock faces, open airy pine forests and small glittering ponds and lakes.

It was a blessing to leave the tent and inflate our packrafts the following morning. With a weight of about only five pounds, they were ideal vessels for paddling through the small lakes with short, but frequent portages in between. The girls enjoyed to be captains of their own ship right away, and the four of us were all smiles, bobbing in our small rubber dingys. Our maiden voyage along a tiny flooded creek quickly gave way to our first portage down to a nearby lake. The landscape widened, and while distant mountain ranges appeared in the horizon, we started the process of moving away from the dreadful deeds of days past. 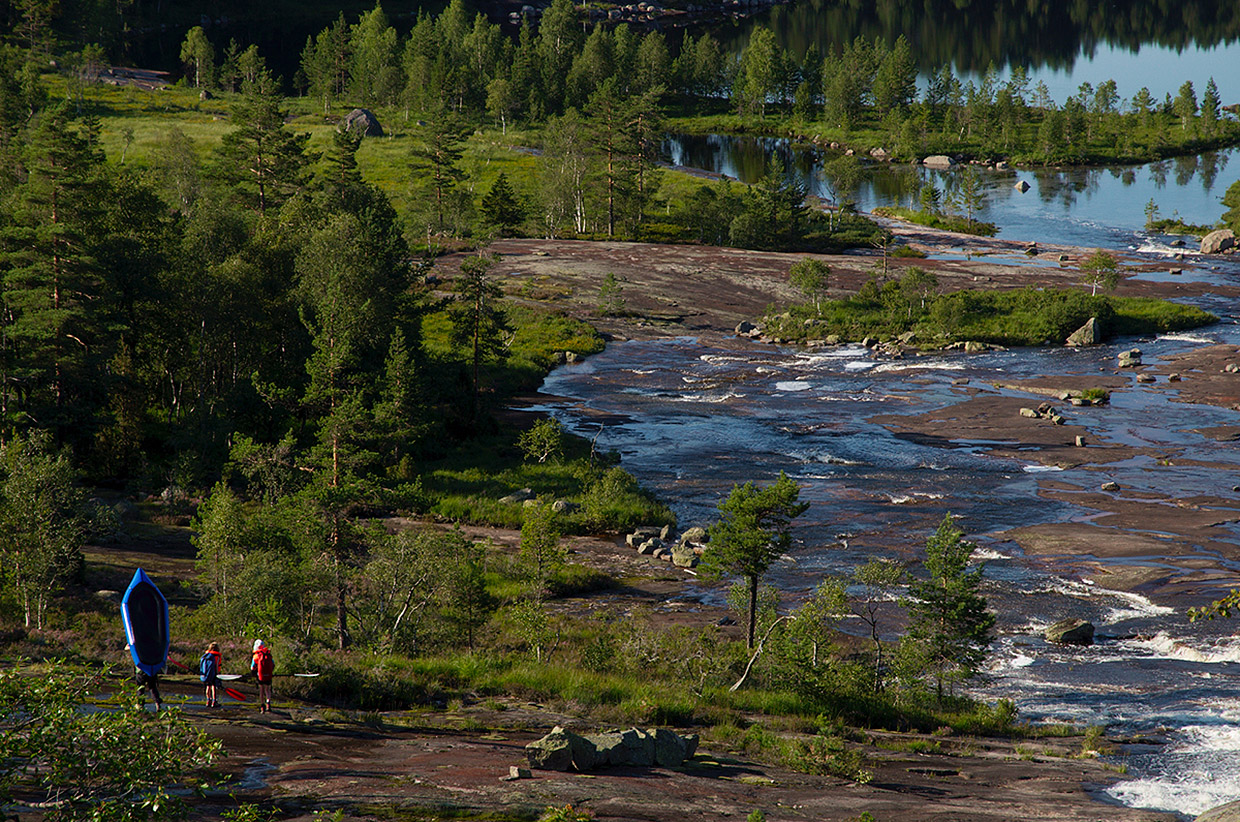 Munching on a fair sized trout caught the night before, we enjoyed the good feeling of being in the outdoors together. We lowered our shoulders and were spellbound by Gautefall. After portaging through a boggy narrow little valley, with steep rock faces to the north, the landscape suddenly opened up and morphed into smooth rock and open forest. We had come to the idyllic Hanetarmane – The Rooster Guts. Elongated ponds lay one after another, like pearls on a string, bound together by a small creek. The blue skies opened up above, and ahead of us awaited great days.

The heavy rain a few days earlier enabled us to paddle parts of the creek otherwise impossible. Soon excited screams and wild laughter broke the silence of the landscape – the girls had their white water début as they negotiated miniature rapids in the river, sliding the packrafts through shallow riffles and drifting down along with the current. The sun peeked through the light clouds, but the warm sensation I felt came from within, from being a father watching your kids smile all over the place while they travel trough a gentle playground for budding mini-adventurers.

Evening fishing in the nearby pool, bathing naked from smooth rocks, touring with the packrafts, basking in the sun, blueberry bonanza – we had it all and couldn’t possibly ask for more. Well, except wishing that the stubborn, picky trout rising like clockwork in the pool close to our camp ended up as dinner …

After a picturesque crossing of a lake rimmed with forested slopes and tall rock faces, the water narrowed, the trees were closing in and the sound of moving water reached us like a faint whisper. The small creek we were following had now been fed with water from the surrounding mountains and we knew that some distance ahead, it would tumble down to the lake Hellersvann. The question was how far ahead. The map revealed no answer, so a quick scout was certainly in order. It seemed like we still had a few hundred meters of paddling before we had to exit the river. Even though the creek had swollen, it was still only just about room for our packrafts. The current was swift and a few small foamy riffles lay ahead of us, as I let the river grab my boat and took of downstream. A few meters up front, I turned the boat and waited for the girls to follow. They wore huge grins of excitement as they went down the first riffles. Leapfrogging down the river, I suddenly heard a scream behind me. The girls packraft had stuck on a submerged rock just above the tiniest drop. Still, the water was moving at a fast pace. Being new to white water, Sif, our oldest daughter, was standing thigh-deep in the river with terror in her eyes, trying to hold on to the packraft to prevent her little sister going down the river. To grown-ups, there were no apparent danger at all, with the little drop ending in a huge pool and only gentle rapids further down. Even eight year old Siri didn’t think much of the situation, fired up by the previous joyful ride down the river. Still, Sif’s scream hit me hard and I was up with them in no time. The river running was supposed to be fun, not frightening. It didn’t take long before we had resolved the mishap, and even if Sif still was looking rather sceptic, her mood quickly brightened as we took of down the last pair of rapids. Then the distant sound of thundering water got us up on safer grounds.

After a steep climb up from the river, we were greeted by a spectacular view: The river ran down a huge, smooth rock face like a bridal veil in the glow of the evening sun. As the landscape widened ahead of us, the incident on the river was quickly forgotten.

Gautefall enchanted us in the brief week we were there, and we had plenty of time for reflection – and just being together. Even the last day was memorable, with fun paddling down the gentle small rapids and bathing from hot, smooth rocks.

This trip had nothing to do with braking records, raising the bar or seeking epic challenges. And while we deflated the packrafts on our last day, Siri hit the nail on the head when she summarized the trip: “I could live here. Mum could look after us if we got sick or wounded, and dad could be our teacher.”

After a picturesque crossing of a lake rimmed with forested slopes and tall rock faces, the water narrowed, the trees were closing in and the sound of moving water reached us like a faint whisper. The small creek we were following had now been fed with water from the surrounding mountains and we knew that some distance ahead, it would tumble down to the lake Hellersvann.

Mikkel Bølstad is trained as a biologist, working as a teacher, writer and photographer, living for the outdoors. Based in Kongsberg, he and his family takes advantage of the vast possibilities of kayaking, packrafting, hiking, cross-country skiing, mountain biking and year round camping in Southern Norway.