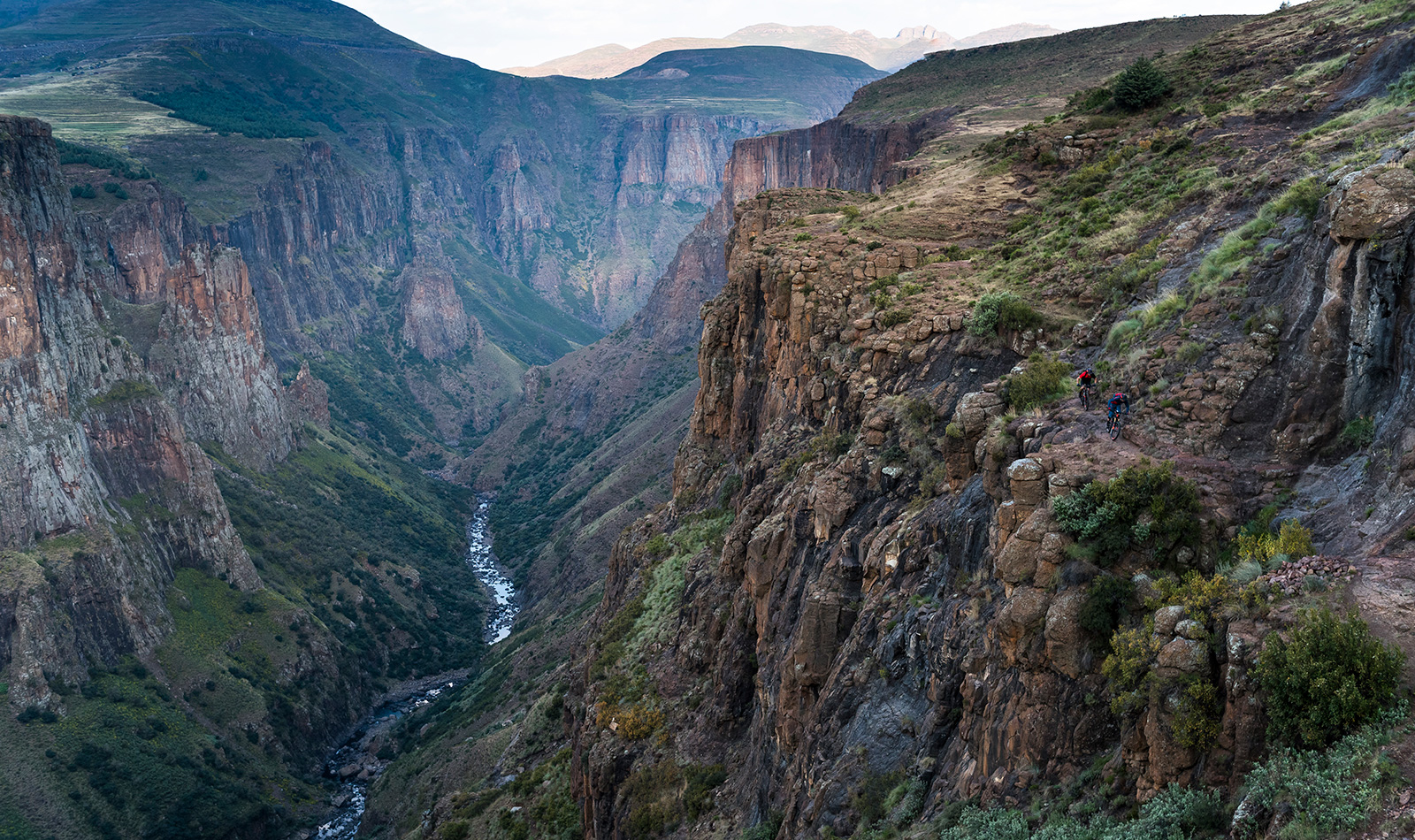 I didn’t travel for two days to eat beans on toast. I’m not complaining, I love baked beans, but I didn’t expect to be served them here, in the ramshackle sprawl and blast-furnace heat of a dusty Lesotho village. On the table in front of me are a mug of tea, said plate of beans on toast, and a pot of Marmite. I could be back home in a British café were it not for the neighing horses tethered only a few metres away.

The culinary surprises on Semonkong Lodge’s breakfast menu have more to do with Lesotho’s British protectorate past than the demands of tourists. In fact, there are few tourist demands here. Tourism is scarce in Lesotho, and while Semonkong is probably this African country’s only tourism hotspot – about 600 are lured here each month by the nearby spectacle of the 192m-high Maletsunyane Falls – venture deeper into its rugged interior and you won’t encounter another foreigner for days. It’s this promise of solitude that enticed me here, along with two other mountain bikers, Claudio Caluori and Kevin Landry. In our shrinking world, slathered now in Trip Advisor ratings, it’s increasingly hard to find solitude. Yet in Lesotho, a country the size of Belgium with only two million inhabitants, we meander for days through empty hills, their silence broken only by the rhythmic bleating of sheep.

We’re a long way from the luxury of a lodge’s menu now – it might as well be on a different planet rather than a day’s mountain bike ride away. We pitch tents on close-cropped grass by the banks of a meandering river. It’s been a long day in the saddle, but we’re still damp from the morning’s unseasonal downpour. We’d been driven to seek refuge in an old woman’s rondavel hut; she had welcomed us into the darkness of her mud-floored, stone-walled and thatched home to warm ourselves beside a brazier. Huddled around that merest suggestion of warmth, we had watched a lazy lick of smoke curl upwards towards a closed roof. She had smiled across a face that carried the trophies of time – a face that suggested few things surprise her now, even three chaps on bikes.

Later, in camp, we sprawl out on a tarpaulin between our tents and gaze across a lumpy sea of tussock grass – noticeably devoid of the pylons and street lamps and other detritus that underpins the ‘developed’ landscape we call home. We revere the tranquility, but the strangeness of our surroundings also leaves us feeling exposed, a sensation reinforced by the setting sun. As it finally slips behind a nearby rocky outcrop, we realise that the encroaching night will do little to dry our kit. In an hour, the thermometer will plummet to near freezing, leaving us reaching for a bottle of Scotch and a plate of hot, mashed sorghum for warmth. The bland, sticky ‘pap’ leaves me wishing for beans on toast in my post-ride hunger, but at least we are the only tourists. Aside from our horse-riding, gear-lugging Basotho support team, we have this valley to ourselves, or so I think. But as darkness descends, the steep hillsides above us slowly come alive with the sporadic glow of campfires. We are clearly not alone.

We revere the tranquility, but the strangeness of our surroundings also leaves us feeling exposed, a sensation reinforced by the setting sun. As it finally slips behind a nearby rocky outcrop, we realise that the encroaching night will do little to dry our kit. 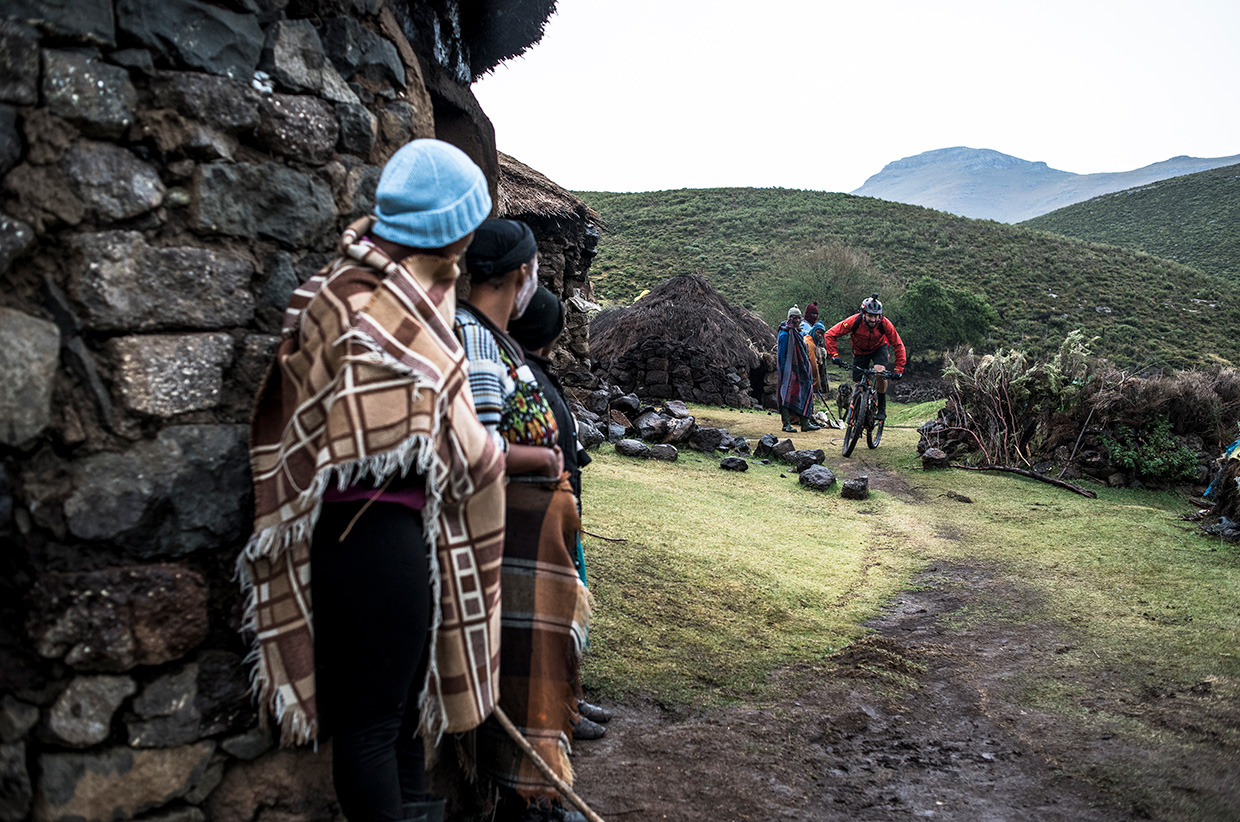 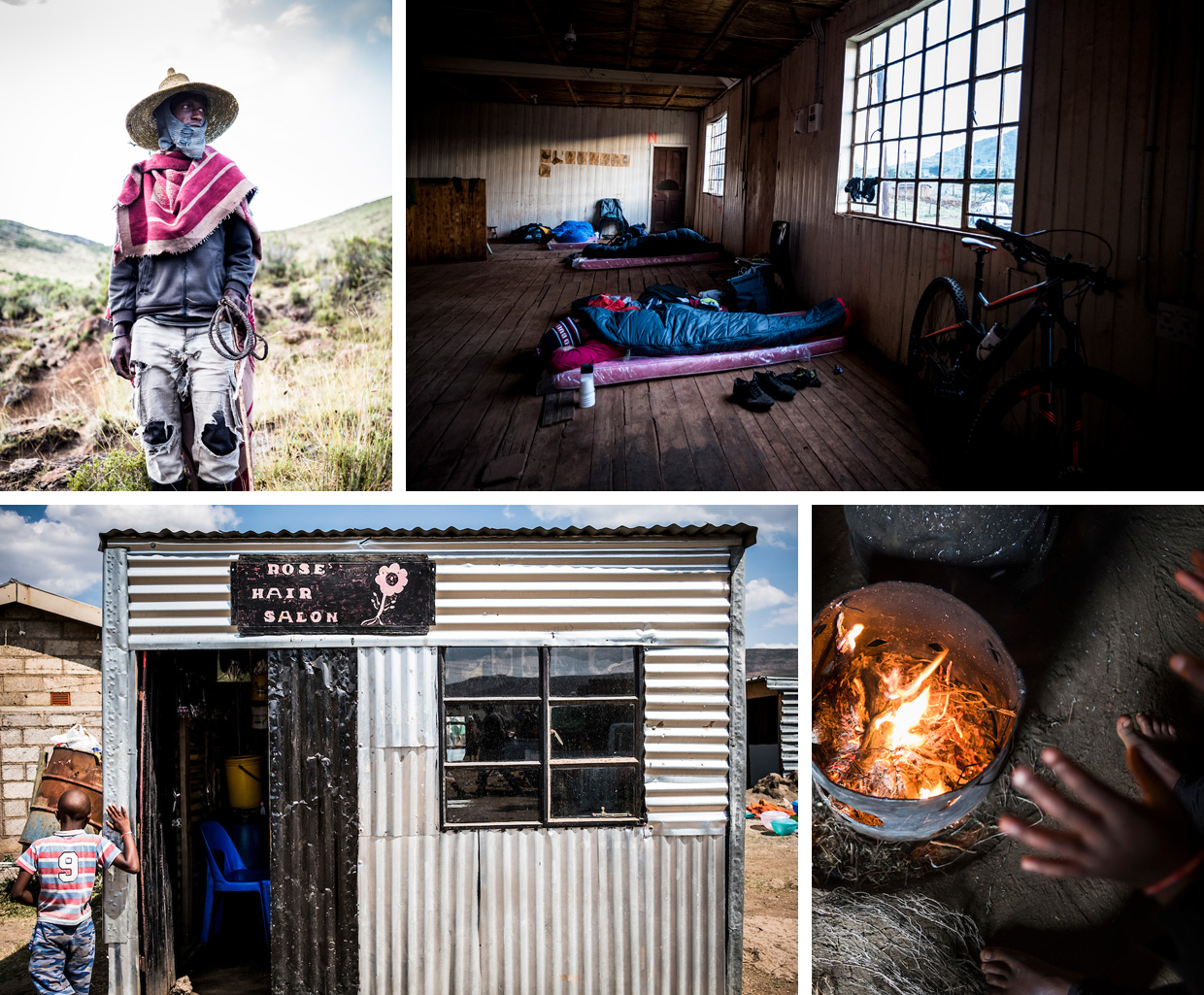 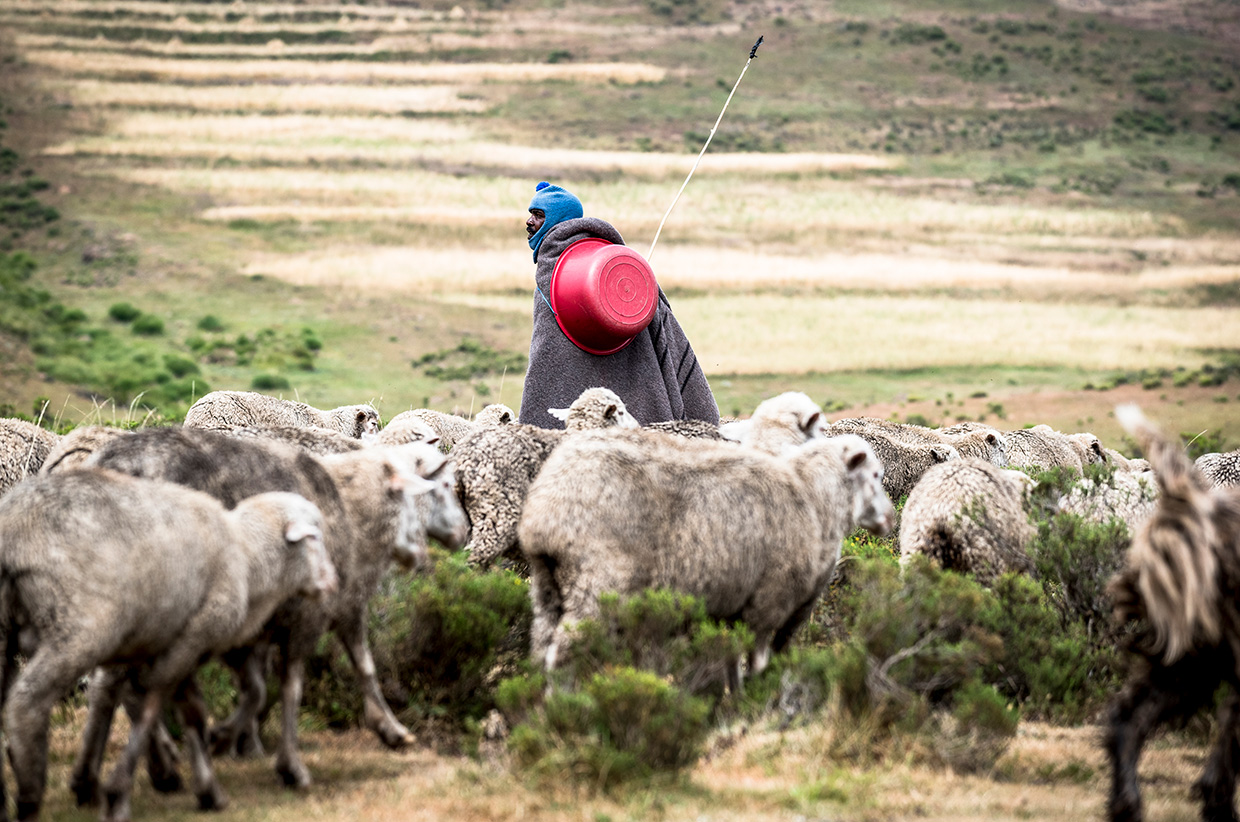 There’s a true sense of isolation when connecting these trails to cross the country’s southern mountains, and between the villages we pass through and at times stay in, the country is an apparent void. The sensation of vulnerability, of being truly in the hands of fate, is almost overwhelming.

Solitude and being alone are not the same, not at least in Lesotho. Today’s ride left behind the vibrant bustle of Semonkong, its anarchic main street lined with a hotchpotch of corrugated-tin-walled shops and hairdressers, and dived straight into a mass of slate-grey mountains, their flanks a Friesian patchwork of shadows cast by gathering storm clouds. Ahead of us lie 120km of trail that will eventually lead us to Roma, a university town just outside the country’s capital Maseru, and the culmination of our six-day journey. Lesotho has few roads; in their absence, horse trails have become the arteries of communication between its many rural villages. There’s a true sense of isolation when connecting these trails to cross the country’s southern mountains, and between the villages we pass through and at times stay in, the country is an apparent void. The sensation of vulnerability, of being truly in the hands of fate, is almost overwhelming.

We skirt the bases of ancient volcanic plugs that thrust upwards to pierce the sky, and although absorbed by feelings of peaceful seclusion, we are never alone: Isaac, a young Lesotho horseman, is our guide and accompanies us for the duration. He leads us up climbs and across a dozen chocolate-brown rivers, and brings up the rear as gravity sucks us down rapid, rocky descents. Atop a 15-year-old horse, Isaac rides at his own pace. I realise that this ambling pace and unwavering determination to soldier on through, come what may, parallels Lesotho’s own history and agenda.

Lesotho has been fiercely independent since 1966, and despite being encircled by South Africa, has never bowed to Apartheid. But Lesotho is also poor. Half its population live below the international poverty line of earning $2 per day. It has other troubles, too: about 30 per cent of the adult population are HIV positive, a result of relaxed sexual attitudes and a large migrant male worker population that toils in South African mines. But it is a nation that is resolutely proud. Even their domestic brewery displays the tagline ‘Our Beer, Our Pride’ on its advertisements. And that dignity is apparent in everyone we meet, Isaac included. Whenever we turn to him for information, or quiz him about his life, he offers us a broad, toothy grin from beneath his thick woollen blanket – the traditional uniform of the Lesotho horsemen. It’s a smile that would make any dentist proud and it greets us everywhere we go.

Isaac leads us on narrow horse trails that thread high above oxbow rivers and over mountain passes. Hoofed into the hillside by a century of equine traffic, the trail is often buff and dusty, making for fast, endorphin-rich riding, but it throws us curve balls too. We roll out of camp into a long, steady climb through shoulder high, golden grass towards Baboons Pass. This landmark on our route comes shrouded in cautious mystery. The marauding troops of baboons are long gone from the pass – and everywhere else in Lesotho – but Isaac tells us that crossing this remote pass is notoriously challenging even among the most experienced horsemen. The reasons for this notoriety become apparent when we reach the top. We peer down the other side at a bedlam of loose boulders and ready ourselves for what will be a challenging ride – or a slow walk. Isaac doesn’t have it any easier. Baboons is the only truly unridable section we encounter in six days, and although we stab and prod at its challenges like a kid with a stick poking a sleeping snake, we can’t forget how truly remote we are. It’s not a place in which to take risks. 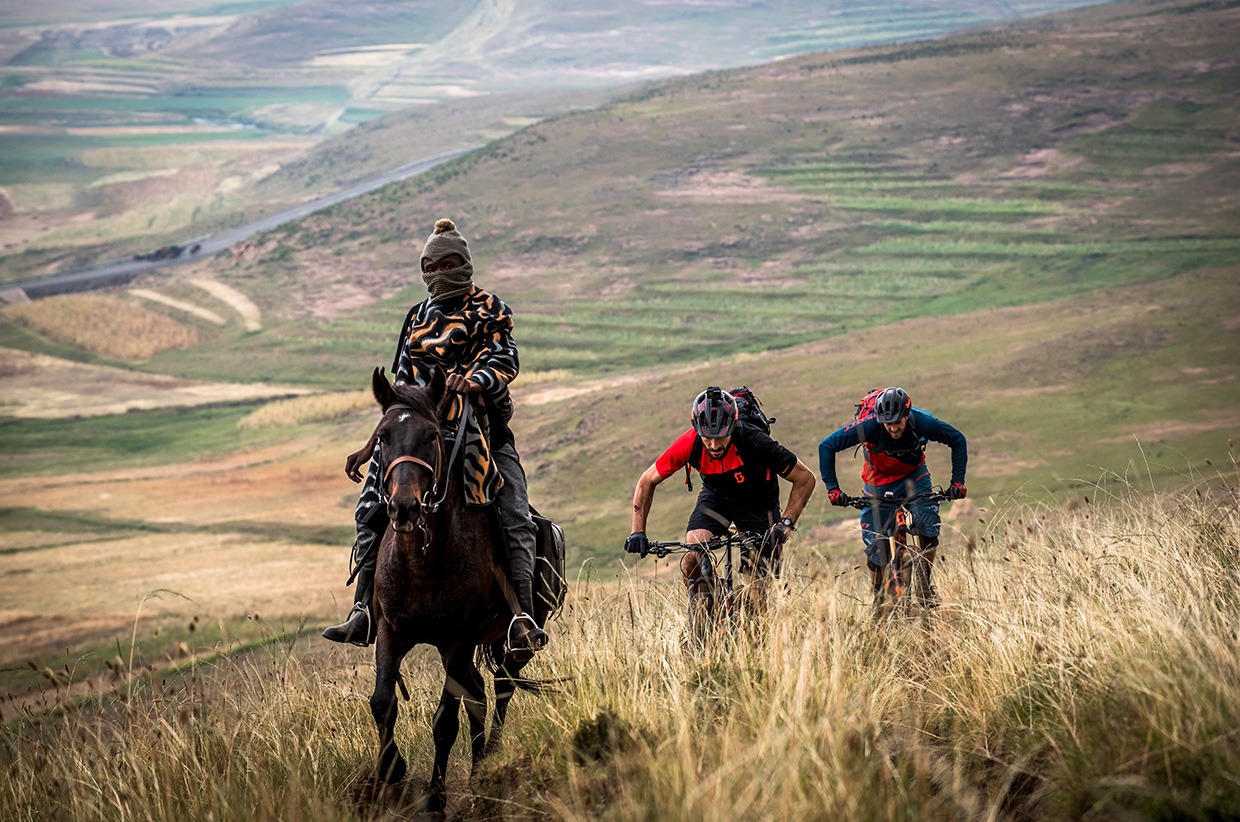 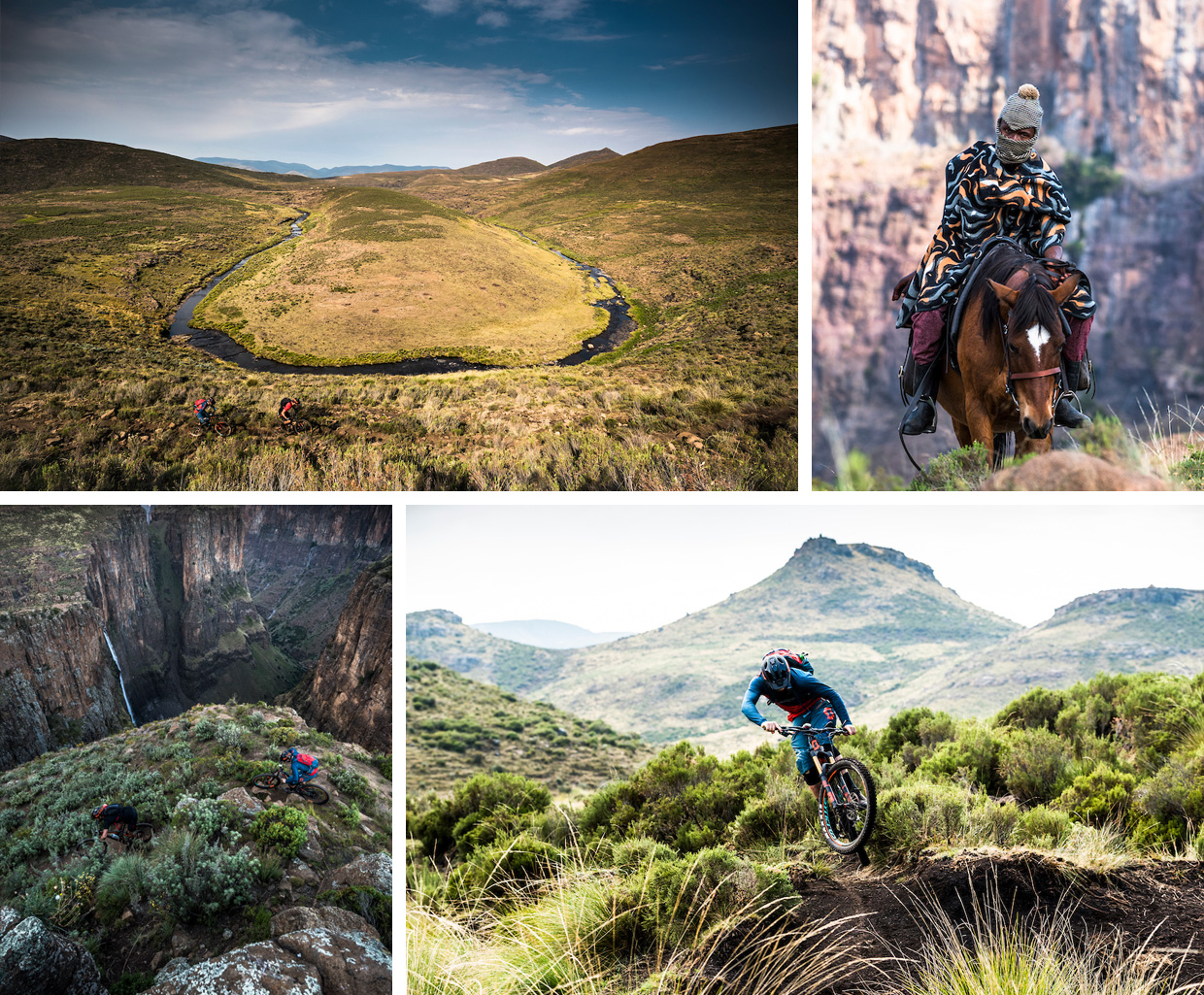 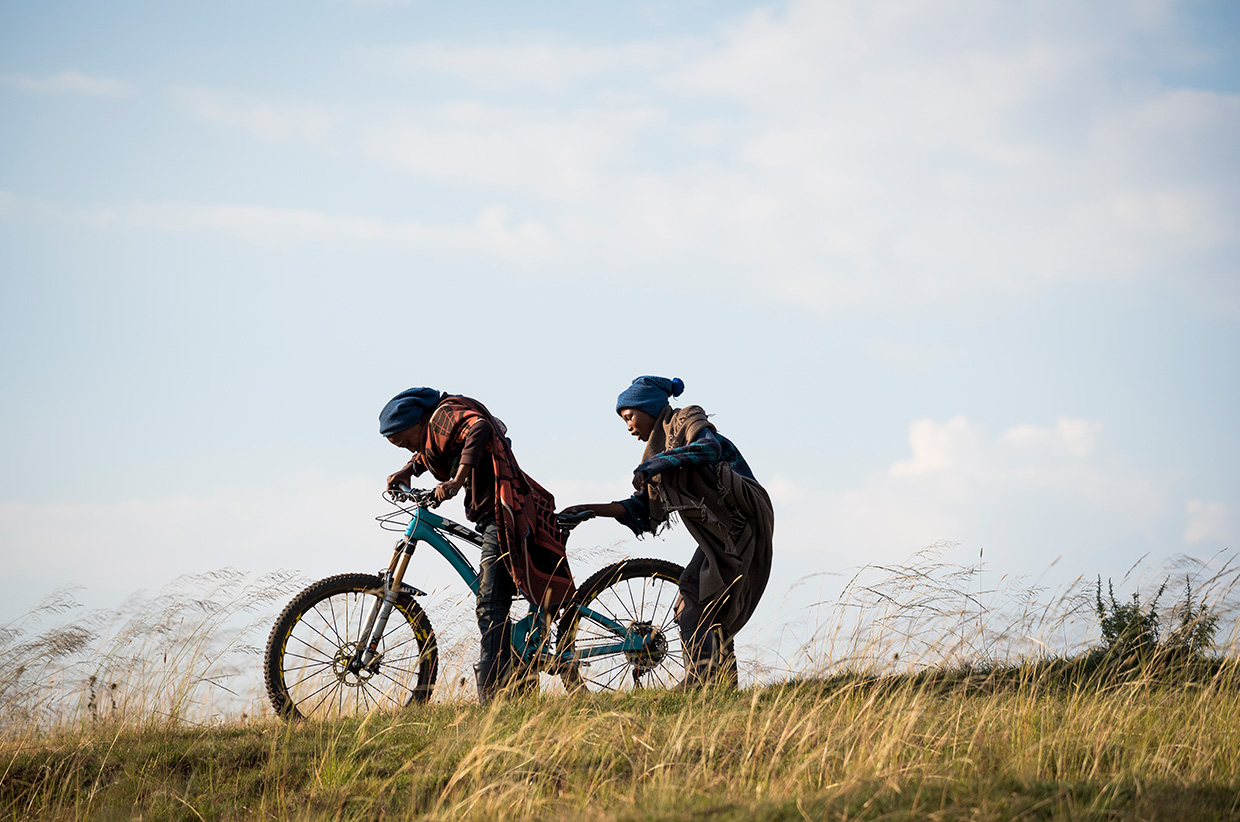 Our journey quickly becomes one of converging extremes. Physical and mental challenges like summiting Baboons Pass become interwoven with episodes of relative luxury. We dip in to cool boxes of beer that await us at the end of each day of tough riding, and we sleep comfortably on polythene-wrapped pink mattresses, thanks to the supportive efforts of two Maseru locals, Thumelo Makhetha and Thabo Ntlhoki. Believing that the apparent impenetrability of Lesotho’s interior – something that has both empowered it to resist colonisation and kept tourism dollars at bay – is actually its strength when it comes to adventure tourism, Thabo and Thumelo have set themselves up to cater for adventure trips like ours. They use an old, wheezing pickup truck to haul our luggage and the teetering pile of pink mattresses between two villages that have no lodge accommodation. Late in the day, exhausted and grimy, we roll into each village only to find Thabo and Thumelo organising teams of locals to convert disused trading posts into makeshift accommodation. They sweep creaking wooden floors clean to welcome our pink mattresses while adjacent rooms are converted into pop-up kitchens. We devour bowls of thick bean stew washed down with bottles of South African wine. Later, we sleep beneath dog-eared posters for long-forgotten products that were exchanged during the heyday of the trading posts.

While these experiences provide a nostalgic dip into Lesotho’s past, our time spent riding bikes lets us see a possible future for some Basotho. For the last three days of riding we’re joined by Botang Molapo, a young local mountain biker who has his sights set on becoming a mountain bike guide and mechanic. He bristles with enthusiasm and sets a pace few of us can match – Isaac’s horse included. We streak across vast, open plateaus under enormous skies, and descend loose, dusty canyons to follow gurgling rivers. As tourists, Claudio, Kevin, and myself agree that we’ve visited few places as seemingly empty and unspoiled as Lesotho, but are acutely aware that one goes hand in hand with the other. As Chinese investment pours in to build jeans factories in Maseru, it’s hard to say what reach this investment will have among the rural communities – villages that make up three quarters of Lesotho’s population. But that’s where Isaac and Botang, Thumelo and Thabo enter the picture. They know how to paint the landscape ahead, and what role adventure tourism can have in transforming the economy of rural Lesotho.

As we pull up on the edge of a rocky escarpment to overlook the sprawl of Roma below, I wonder if in years to come these trails will be busy with hikers and mountain bikers, all being guided by young, blanket-wearing Lesotho horsemen like Isaac. Then, punctuating the days of searching for solitude, perhaps the old disused trading posts will have been brought permanently out of retirement as full-time lodges. I wonder how Lesotho will balance its rich traditions with the promising future being grasped by people like Isaac, and I wonder if beans on toast will still be on the menu.

This story was first published in Sidetracked Magazine Volume 12.

As we pull up on the edge of a rocky escarpment to overlook the sprawl of Roma below, I wonder if in years to come these trails will be busy with hikers and mountain bikers, all being guided by young, blanket-wearing Lesotho horsemen like Isaac. 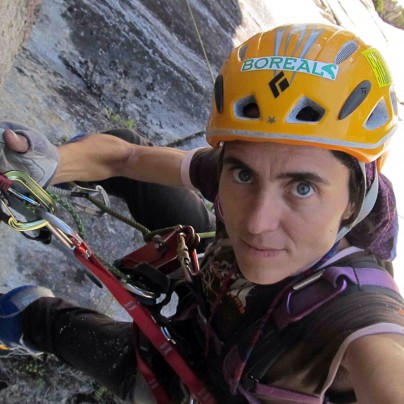 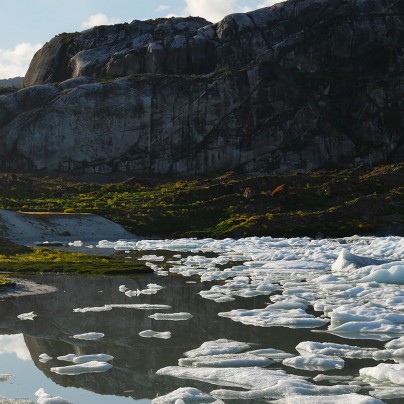 A Topography of Solitude Charlie Tokeley 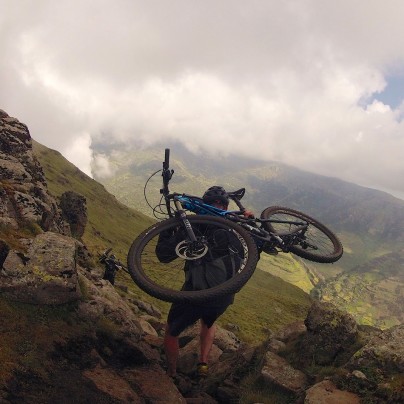