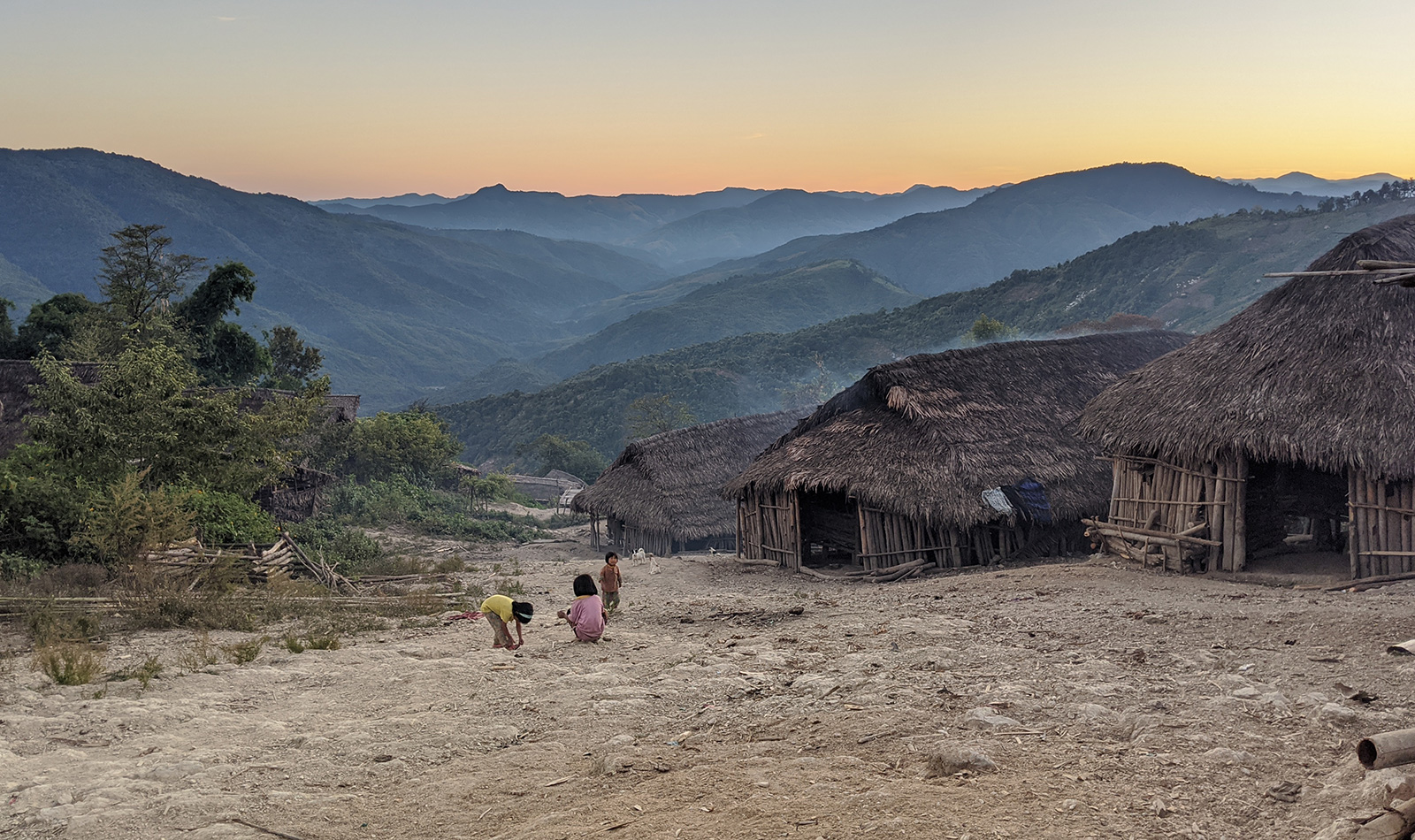 It’s December in north-western Myanmar and I’m travelling upriver in a soupy pre-dawn fog. A Stygian realm of uncertain edges and amplified sounds; lights blur in the formless gloom, water plashes against the bow. As night smudges to day, the sharp serrations of the Naga Hills take form to the north, white towers of cloud toppling off their peaks.

After a month of motorcycling solo across the Indian state of Nagaland I’m heading for Myanmar’s Naga Self-Administered Zone, a jagged seam of mountains marking the Indo-Myanmar border. Home to 120,000 Naga – a Tibeto-Burman people made up of an estimated seventy tribes – the region has proved difficult to reach, let alone explore. It’s been a week since I left my motorbike in India, including three days clattering up the Chindwin on this peeling old ferry. The remoteness goes some way to explaining why – while much has been written of the Naga tribes in India – Myanmar’s Naga are barely known.

In Hkamti, a sleepy town on the northern reaches of the river, I meet Juu, a female guide from Yangon, and two local ‘bike boys’, Man Htaung and Than Zaw, their 125cc motorbikes bulging with supplies for the coming weeks. After months of research and a number of disjointed WhatsApp calls, I’m still unclear what foreigners are permitted to do here, or at what point I’ll be turned back. But I do know I’m forbidden to ride a motorbike, and that I have to travel with a licensed Burmese guide. Squeezing into the saddle between Man Htaung – a garrulous young Naga – a sack of cauliflowers, and a box of motorbike spares, I steel myself for a bone-juddering few weeks.

How far we’ll get depends on the police, the army, and the Naga insurgents, all of whom are active in this contentious border region. I want to reach the remotest Naga villages, places largely untouched by imported beliefs, but they’re in the neighbouring district of Nam Yun, a region strictly off-limits to foreigners.

The boys set off like gunshots, corkscrewing into the hills on a red dirt road, the silence of the jungle shattered by the roar of our exhausts. We reach Lahe, the first Naga settlement, a dusty five hours later, its bamboo and concrete buildings sprawled across a bluff among jungle-drenched peaks.

In Lahe we’re spotted and followed by two policemen, wiry Burmese in fake leather jackets. One joins us as we slurp noodles at a shack in town, Juu fielding his questions as Mariah Carey’s Without You blasts out of a radio. I’m not allowed to leave Lahe on a motorbike, he insists, and can only visit the two nearest villages. ‘Don’t worry, I know how to deal with immigration,’ says Juu later. Ignoring the policeman, we speed out of Lahe before dawn the following morning, my telltale white face covered with a Buff. 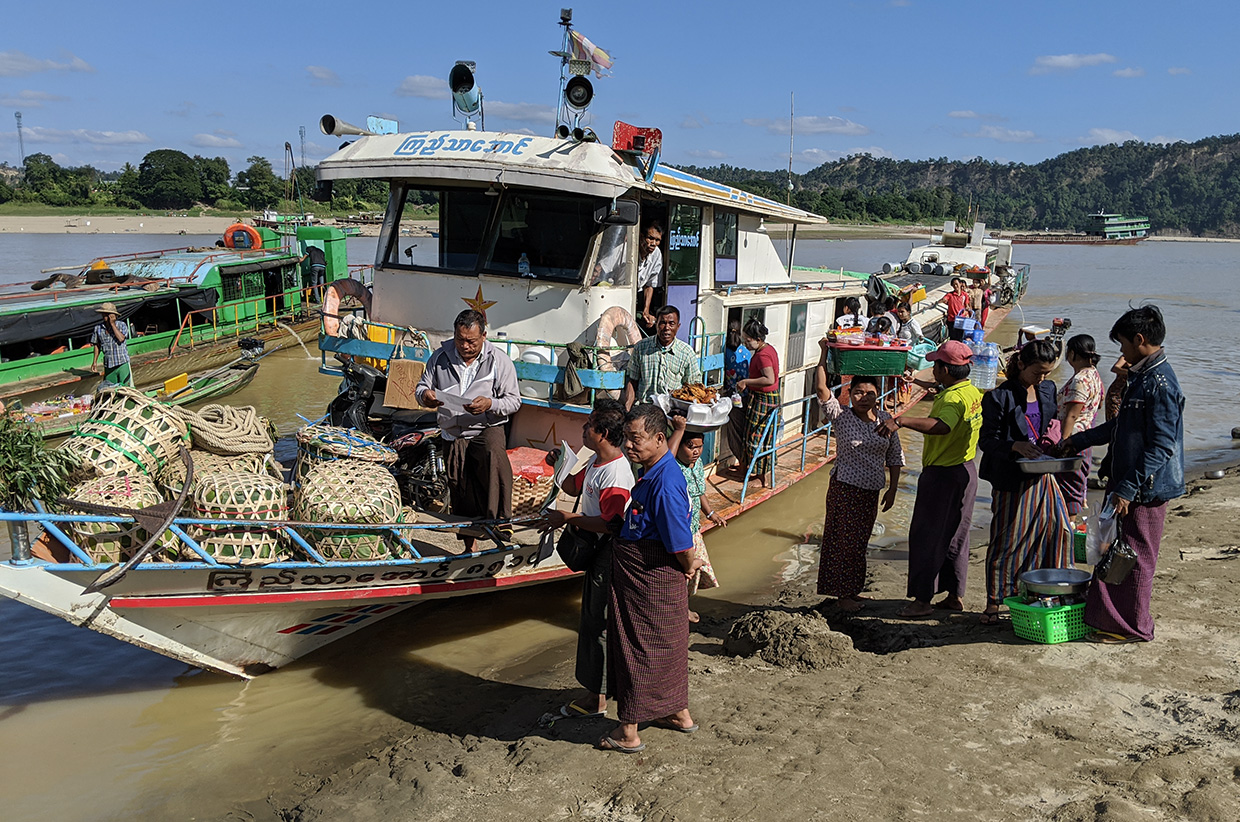 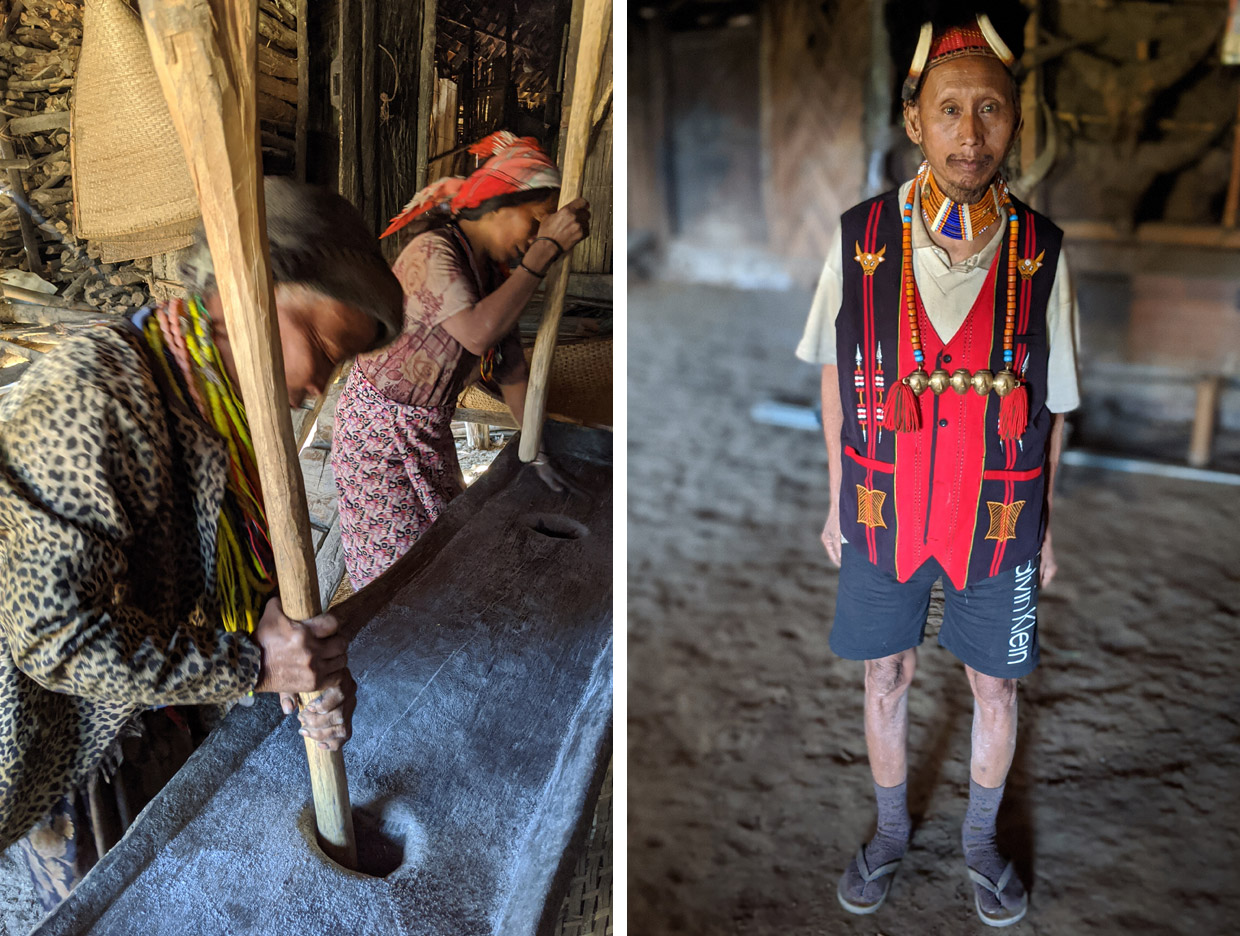 For several days we zigzag north, twisting up narrow tracks and sliding down rocky, precipitous slopes. At night we stay in palm-thatched villages, sitting around fires in a fug of smoke and chatter. Rows of hunting trophies flicker in the firelight – the skulls of bear, wild boar, sambar deer, monkey.

Late on the fourth afternoon we reach a village belonging to the Konyak, one of the largest Naga tribes, just three miles from the border with the Indian state of Arunachal Pradesh. I spot the village from a few miles away, that familiar sight of hillsides stripped by jhum – slash and burn – cultivation, like sheep half-shorn of their emerald fleeces. A church steeple pokes above the trees, gilded by the last of the light.

Man Htaung grew up here so we stay with his cousin, the pastor, a thin, melancholy man who’s lost nine of his ten children to ‘fevers’ and diarrhoea. When I blow up my Therm-A-Rest the pastor looks on in amazement – never has such luxury been seen in these parts.

From here, the big question is whether we can go any further. The next villages are in Nam Yun, and to reach them we have to pass a Burmese Army post. ‘If they catch us we’ll be in serious trouble,’ says Juu, but whether that means a slap on the hand, prison or deportation, she isn’t clear.

To my surprise – and, I have to admit, delight – Man Htaung suggests we seek the advice of his uncle, the local commander of the NSCN-K, one of the groups still fighting for Naga independence.
Tales of the insurgency have stalked my journey across the Naga Hills. While headhunting and the British are long gone, the Naga are still at war – a decades-long struggle for independence that’s cost an estimated 200,000 Naga lives. Although an official ceasefire was signed between the Indian Government and Naga Political Groups in 1997, the situation remains unresolved. The NSCN-K attacked an Indian Army border post a few weeks ago, and many of their camps are hidden in this remote corner of Myanmar.

We meet the commander, an intelligent-looking man in khaki fatigues, that evening. He sits on a low stool beside the fire, fiddling with a walkie-talkie. ‘There are 200 Burmese soldiers patrolling the border at the moment, looking for insurgents,’ he says, Man Htaung and Juu translating from Konyak, via Burmese, to English. Above him, a rack of rifles glints in the firelight and an old headhunting basket gathers dust. Five other men talk and smoke opium, the gurgle of their pipes mixing with the twilight chirring of insects.

Despite the patrol, the commander thinks it’s safe for us to go on, telling us of a hidden track past the army post. ‘Just make sure no one in the villages reports you to the army!’ he warns. 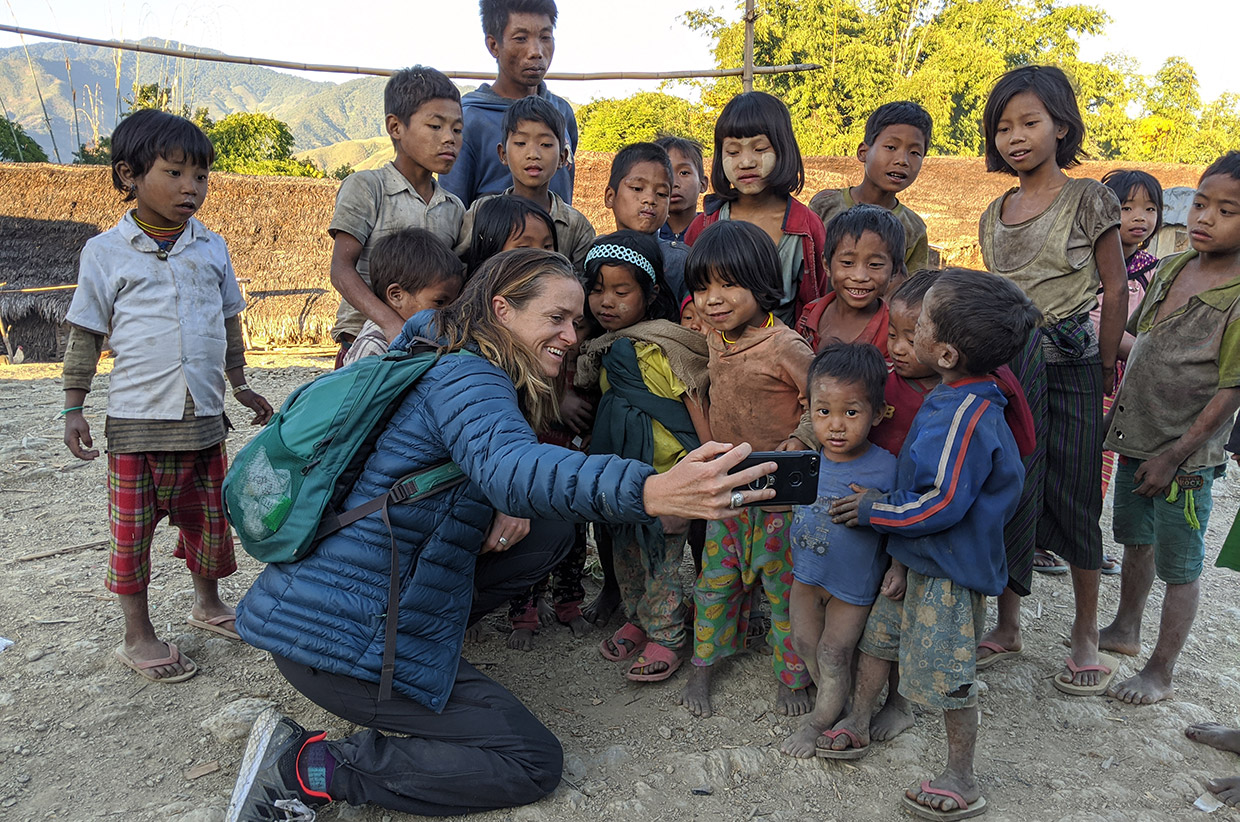 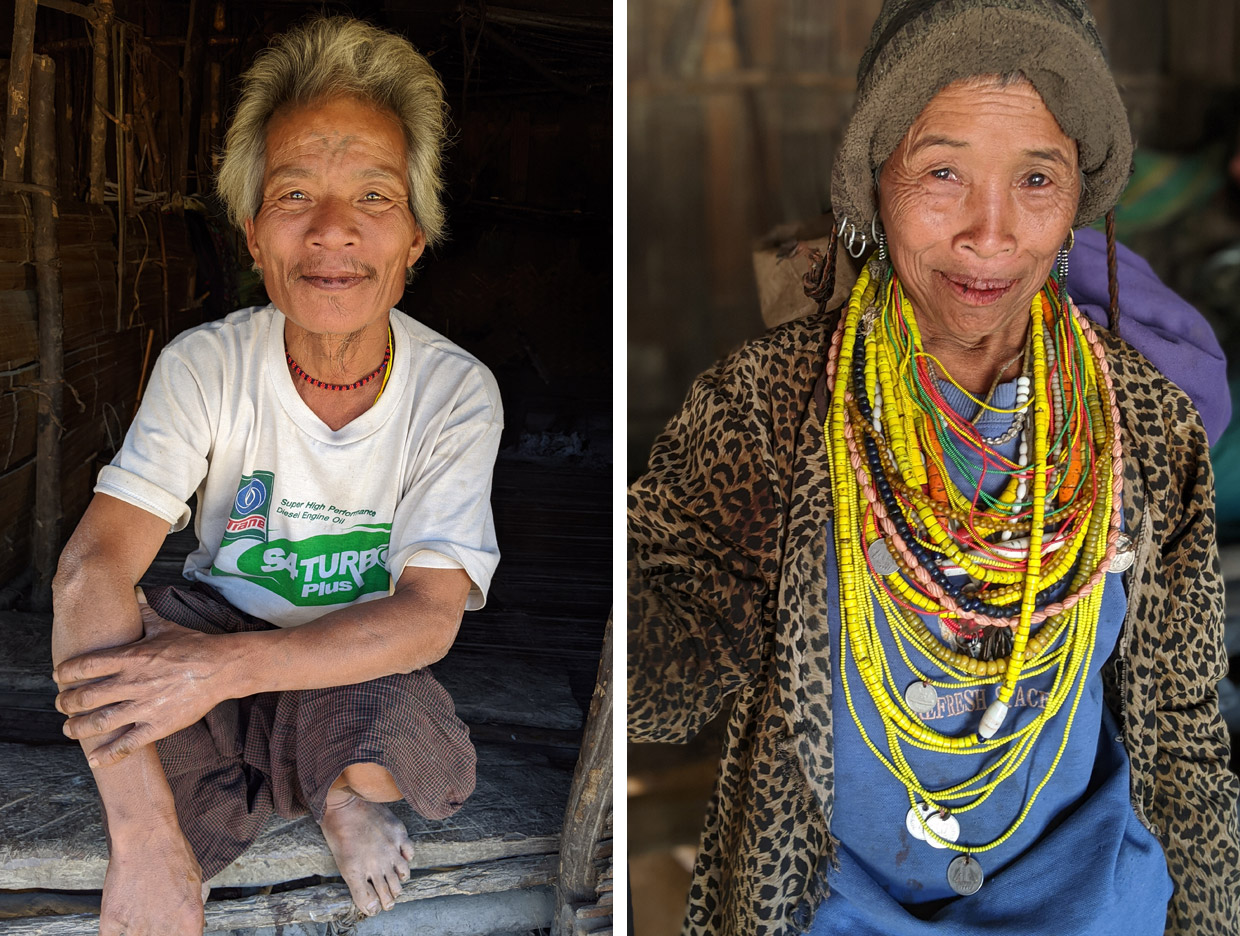 Before we go, I ask him about life on the border. ‘We knew nothing about the border until 1971, when the army came and put markers in the ground’ he replies. ‘But we are all Naga! The border means nothing!’ The villagers still use Indian rupees, buy rice from a Konyak village across the national border, and send their children to study in India. Even their religion was imported, brought here by Indian missionaries in the mid-1980s. Now the Konyak – along with 99 per cent of the Naga are Baptist, and men who sang lusty war songs now sing ‘Praise the Lord!’ instead.

He doesn’t want to talk about the NSCN-K, but as we walk back to the pastor’s hut, the stars glittering above, Man Htaung tells me the group has 10,000 cadres and is funded by the Chinese. With no other jobs and little connection to the rest of Myanmar, the men here have little choice. ‘We want unity for the Naga’ says Man Htaung, ‘we don’t want any borders.’

We sit around the pastor’s fire the following morning, discussing whether to go on. As keen as I am to reach Nam Yun, I don’t want to endanger my companions or do anything against their will. But they want to go, they say, despite the risks. ‘The road is VERY bad’ warns Juu, as I drink the last of my tea.

It’s a heart-thudding ride north-east from here along the ridge of the Indian divide. We struggle up vertiginous slopes and slither down to countless rivers, inching the bikes across slippery notched logs. The only other people we see are two men walking barefoot to the fields, guns slung over bony shoulders; they gape when they spot me. Now I understand what the Naga mean when they say only ‘true friends or serious enemies’ can reach their villages. If anything happens, we’re well and truly on our own.

Stopping in a gully before the army post, I pull on my ‘disguise’ – coat, gloves, sunglasses, Buff. Satisfied that not an inch of my skin is showing, we race through the jungle on a hidden track – the yellow army compound looming on a bluff above – head down, heart drumming, whipped by elephant grass and bamboo. An hour later we stop, sweating and jubilant: we’ve made it to Nam Yun.

Beyond here the path threads along the shoulders of steep, dry mountains. Gone is the lush jungle. In its place is a rocky, inhospitable landscape thick with sallow dust. The worse the track becomes, the faster Man Htaung rides, laughing like a drain every time he feels me tense. He even laughs when we have to carry the bikes across a landslide, our boots sending clods of earth spinning into a ravine. 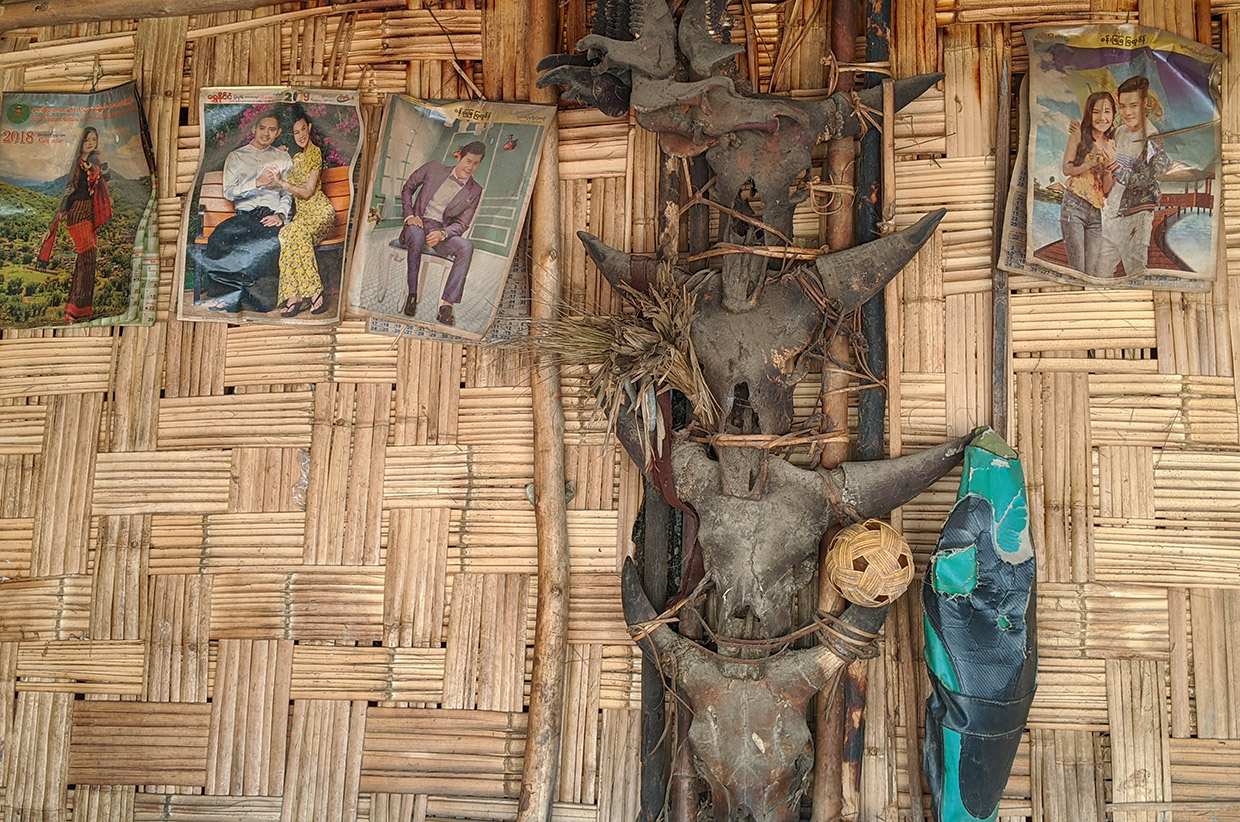 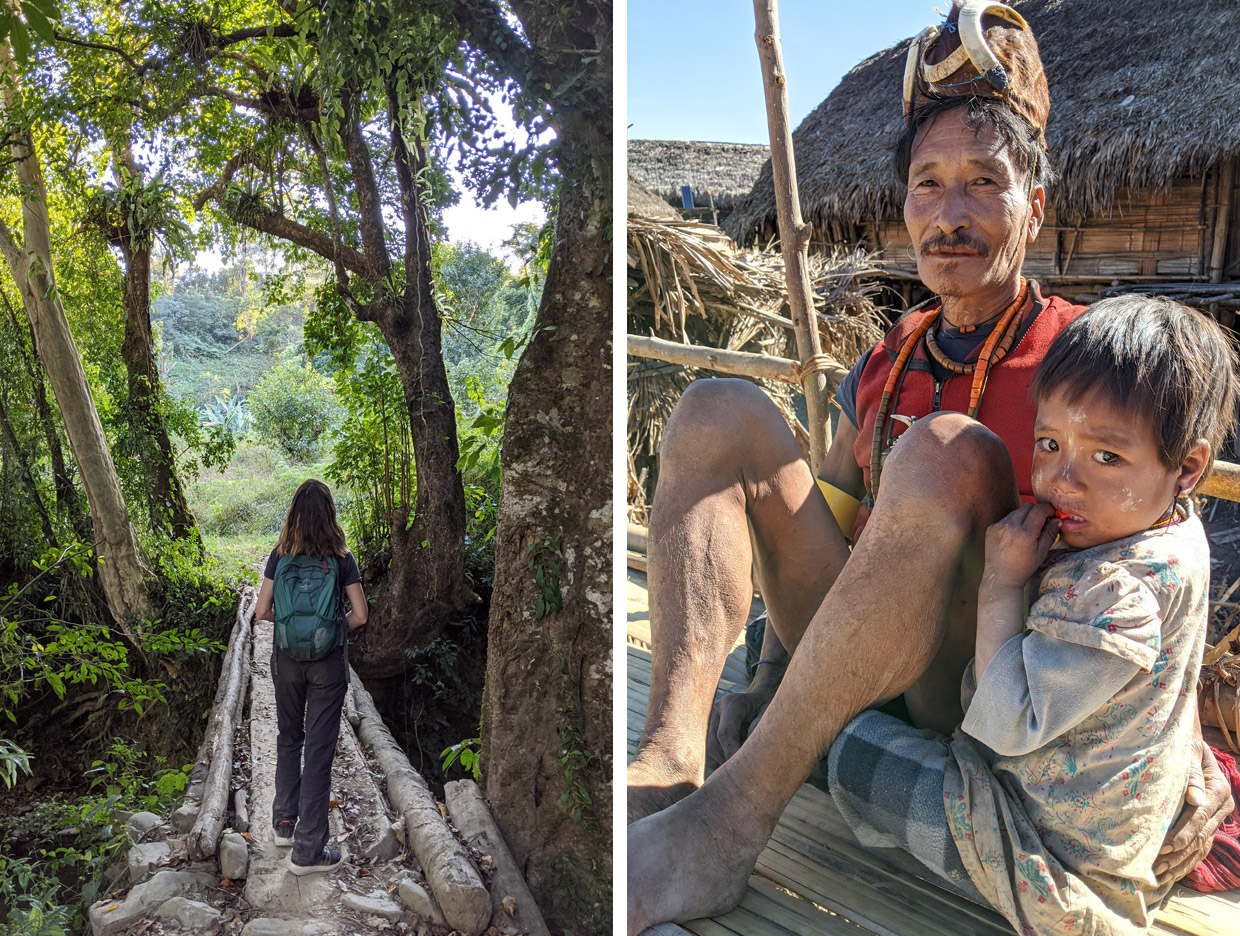 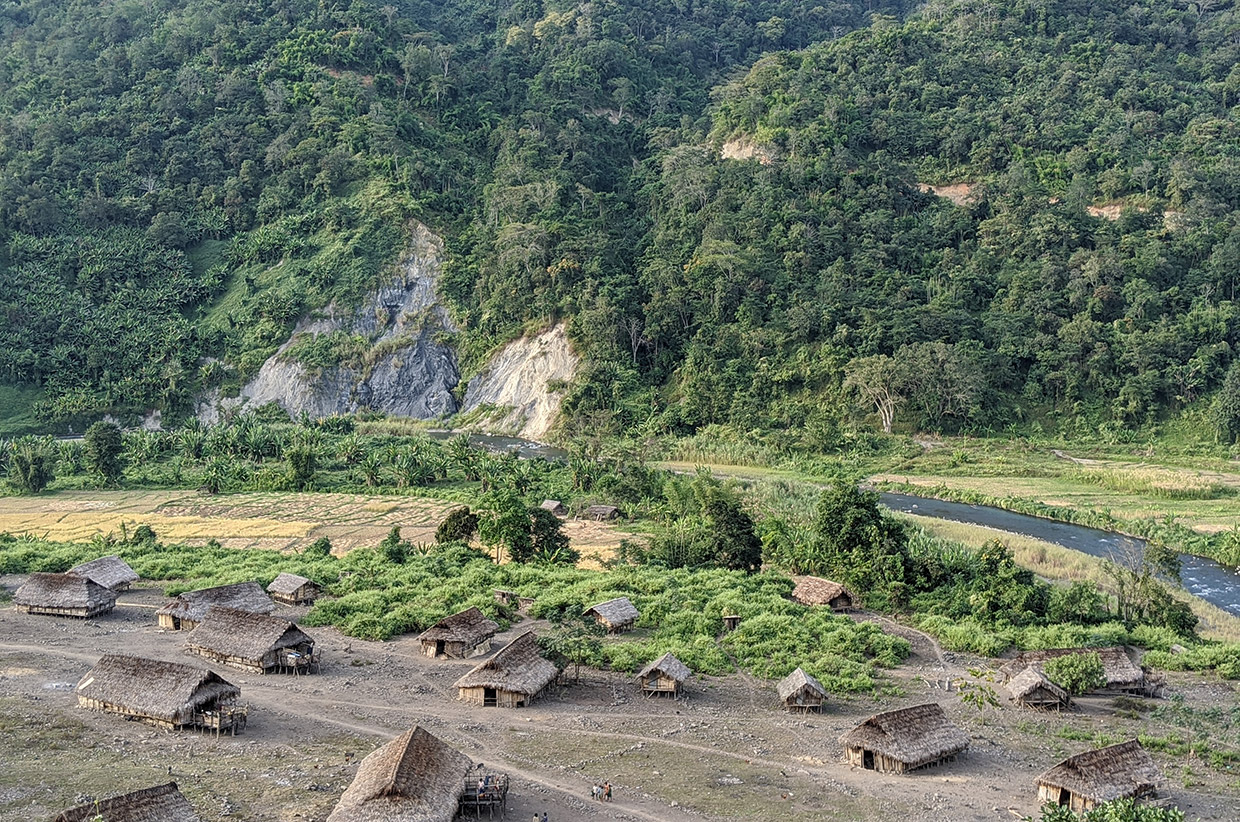 We reach the first village as a vermilion sun sinks below the blue smear of the hills, and are at once surrounded by a ragged crowd of children, bellies fat with malnutrition. They jostle around me, shyly at first, then shriek with delight when I show them photographs on my phone.

The Chief, a kindly man with faded facial tattoos and a thatch of grey hair, agrees not to report us to the army, and has heard nothing of the border patrol. We spend the night in his hut, cooking food from our dwindling supplies, fifty hungry faces pressing in at the open windows. ‘The ground here is too rocky to grow rice’, the chief tells Juu, while sucking on a bamboo flagon of maize wine. ‘We hunt, and sell opium, to survive’. When we leave the next day, we give him all the food we can spare, and watch him break it into baskets to share among the villagers.

I walk around the village the next morning, trailed by a wake of children. Three young boys are trying to dig a rat – their breakfast – out from under a hut. Nearby, two pot-bellied toddlers play with scraps of plastic rubbish, the closest thing they have to toys. From every hut comes the rhythmic pounding of maize, the women hissing with effort every time they bring the heavy pestle down.

In the middle of the village, a handsome older man sits on a bamboo platform, dandling a child on his knees. It cries and and buries its head in the man’s chest on sight of me, this oddity with pale skin. The man wears a deerskin hat girdled with boars’ tusks, and round his neck yawns the jawbone of a clouded leopard. When I point to it the man grins and raises one arm in a spearing motion, grunting as he brings the imaginary weapon down.

As we’re packing up the bikes to leave, an old lady comes to talk to Man Htaung, communicating in their few words of shared dialect. Her neck is hung with coins and yellow beads and she erupts into laughter after every utterance. She’s off to work in the fields for the day – at her age! – yet seems to find humour in everything.

I’ve thought of that village, and Myanmar’s Naga often. Never have I been anywhere that’s made me so aware of my privilege; my ability to choose, my education, my access to all the everyday things I take for granted. While Covid temporarily deprived us of our freedoms, I was never without running water, electricity, shops and healthcare – luxuries that these villagers can only dream of.

Some names have been changed, and the names of the villages have been purposefully obscured. Antonia’s expedition was funded by the Royal Geographical Society’s Neville Shulman Challenge Award. Applications for this year’s award close on 30 November.

Nebelmeer Through The Ragnarök Fires