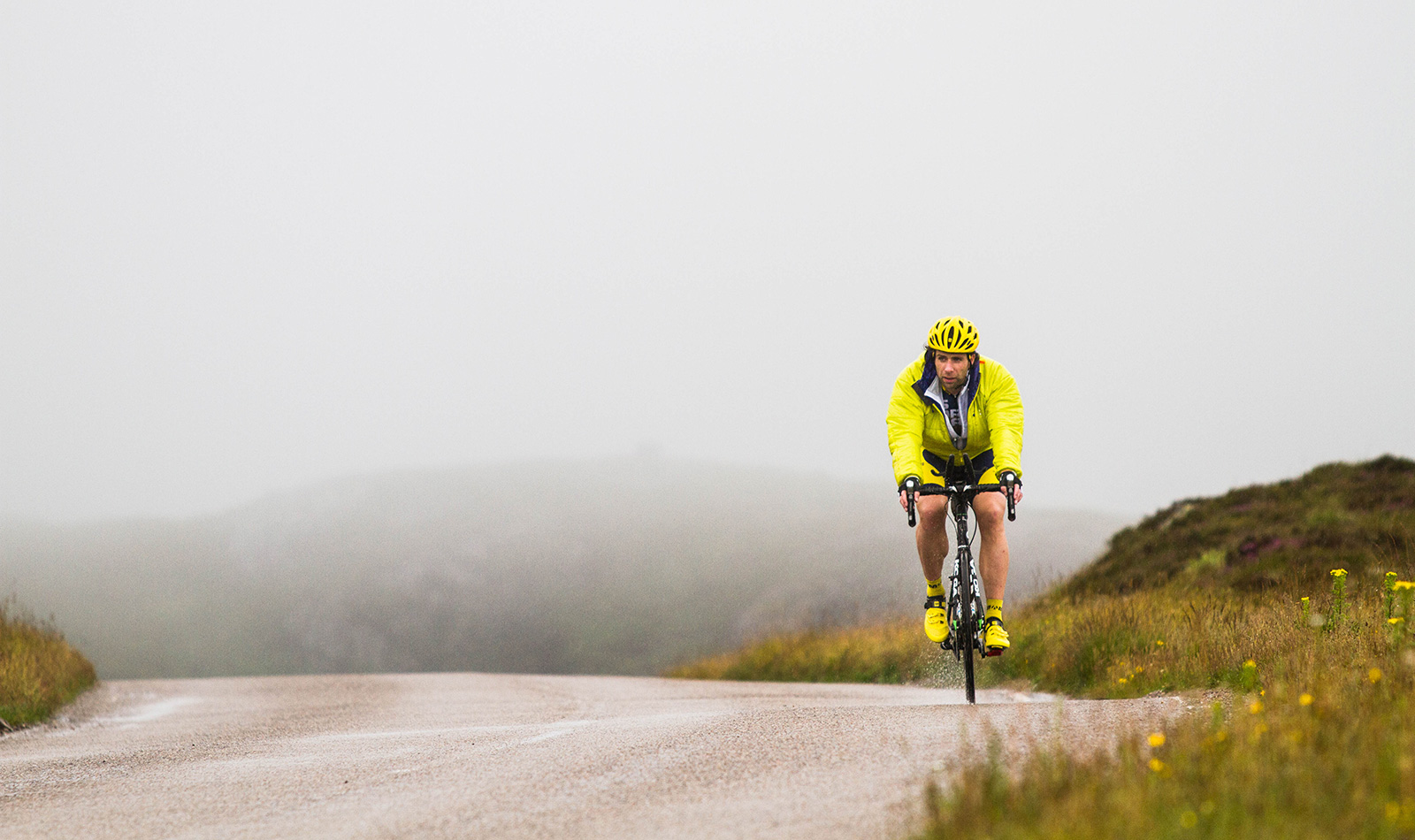 Mark Beaumont takes on the North Coast 500.
Over 500 miles non-stop over some of Scotland's most iconic and challenging riding.
Photography by Johny Cook

I was going clockwise, motivated to get the fiercely hilly west coast out of the way during the daylight and whilst I was fresh. And I was soon feeling optimistic – the first 50 miles passed quickly as I started through relatively flat farmland and then alongside the first lochs and forests as I reached the rugged west coast.

The Beallach Na Ba (Pass of the Cattle) boasts the greatest ascent of any road climb in the UK, rising from sea level to 2,054ft over 9.1km, making it the third highest road in Scotland, with a stunning Alpine style switch back section, accentuated by the single track and at one point 20% gradient. But it isn’t as fierce as its reputation, and taken steadily is a joy to ride.

However, soon the weather started rolling in from the Atlantic. The Applecross peninsula remains constantly undulating, often steep and twisting, and for a few hours we were spoilt with sunshine and views around to the sleepy village of Shieldaig. But as the magnificent, steep terraced sides the Torridon Hills came into view, bare sandstone crowned with white quartzite, the skies darkened and a light drizzle started.

I climbed steadily up and over to Gairloch, sheets of rain falling from slate-grey sky. Riding the same bike that I pedaled Cairo to Cape Town earlier in the year, chosen out of my road bikes for its more comfortable geometry. However, most of Africa’s 439 hours of pedaling was spent on the tri-bars, efficiently spinning along in the same gear. Scotland west coast is anything by steady terrain and my average speed was falling as quickly as my sense of humour as the scale of the challenge hit home. 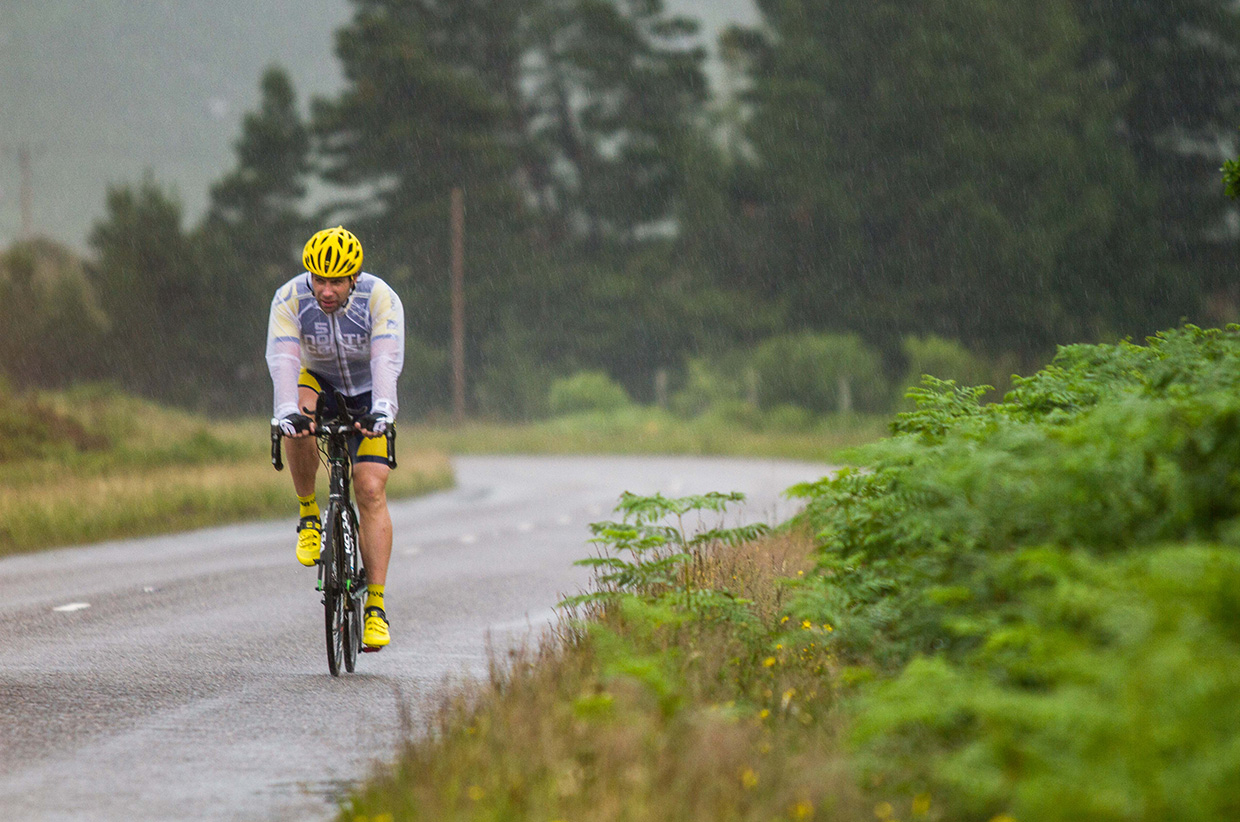 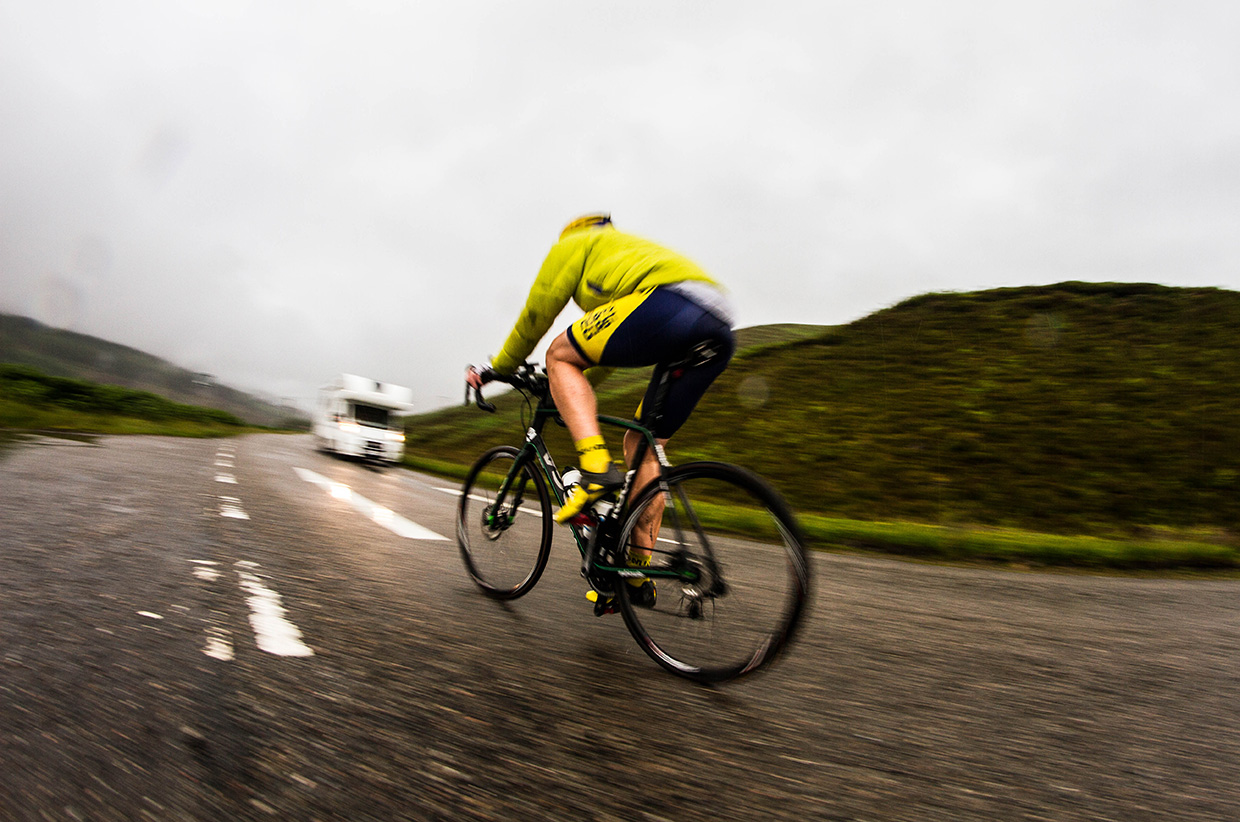 As the light faded long before sunset under heavy skies, I set my next target on midnight, glancing into windows of roadside cottages, looking snug and warm. As the hours passed, these passing windows also went dark and I was left in the pool of my headlight.

North of Lochinver the road narrowed once again to a narrow track and I faced some extraordinary terrain, no doubt stunning by day, but at 4am in the pouring rain this was the toughest section yet. Reaching Durness, Scotland’s northwest corner, was an huge and long awaited relief. I guessed wrongly that I would finally turn east and gain some flatter roads. In fact, the route remains hilly until Thurso. However, by the village of Tongue, dawn had at least brought a break in the weather. After 13 hours of rain I started to dry out.

Mentally, I had kept my focus very short through the night, a few hours at a time. As is often the case, once past the tough stretch, back in the daylight and dry, rather than feeling great I soon lost focus, and had a few hours in the mental doldrums. Staring at the road under my front wheel, hurting deeply and unable to think about the 200 miles that still remained. It wasn’t until mid morning that I managed to shake the slump and pick my speed up again, focused on the next milestone, John O’Groats.

Spontaneous support riders and roadside cheerleaders started appearing from mid morning and gave me a huge boost. The rugged west gave way to the calmer east; sea cliffs drop off Dunnet’s Head, mainland Britain’s most northerly point, giving a stark border to the North Sea and a horizon only broken by the outlying islands of Orkney. 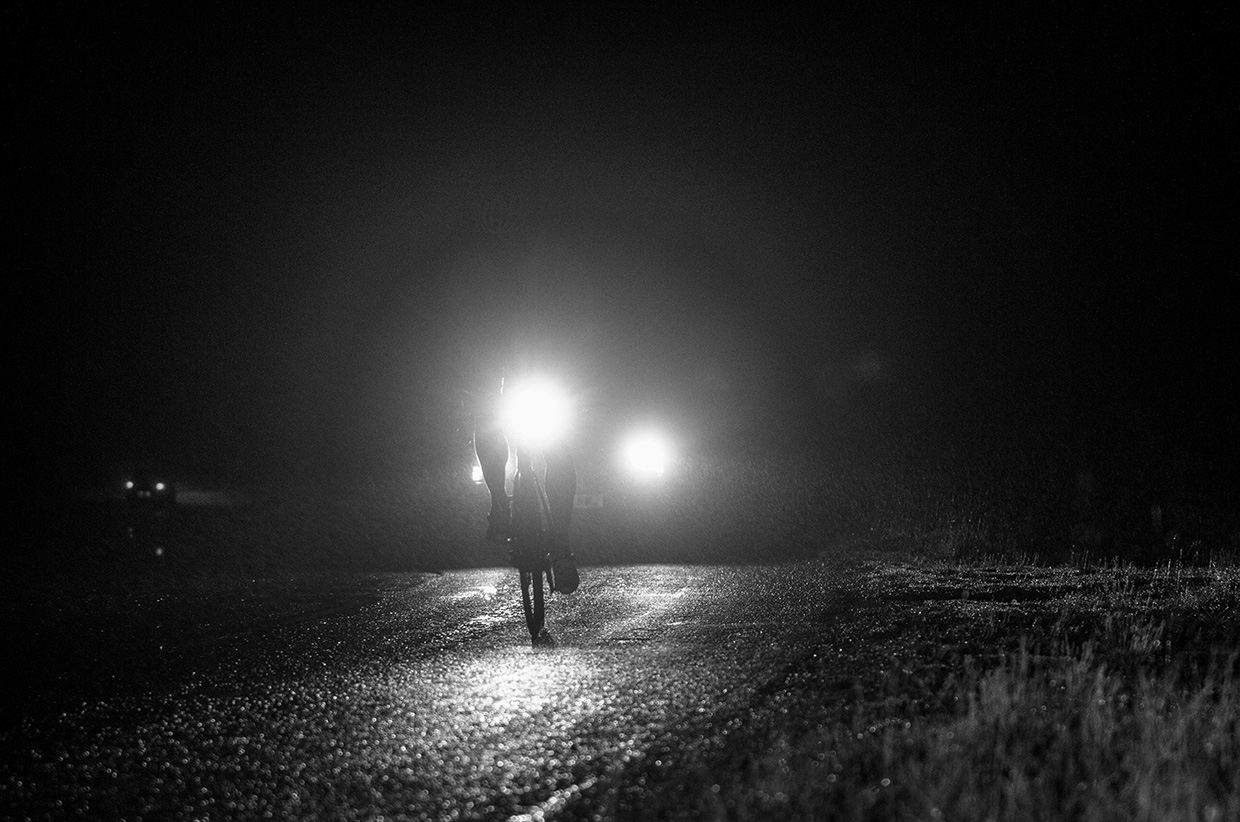 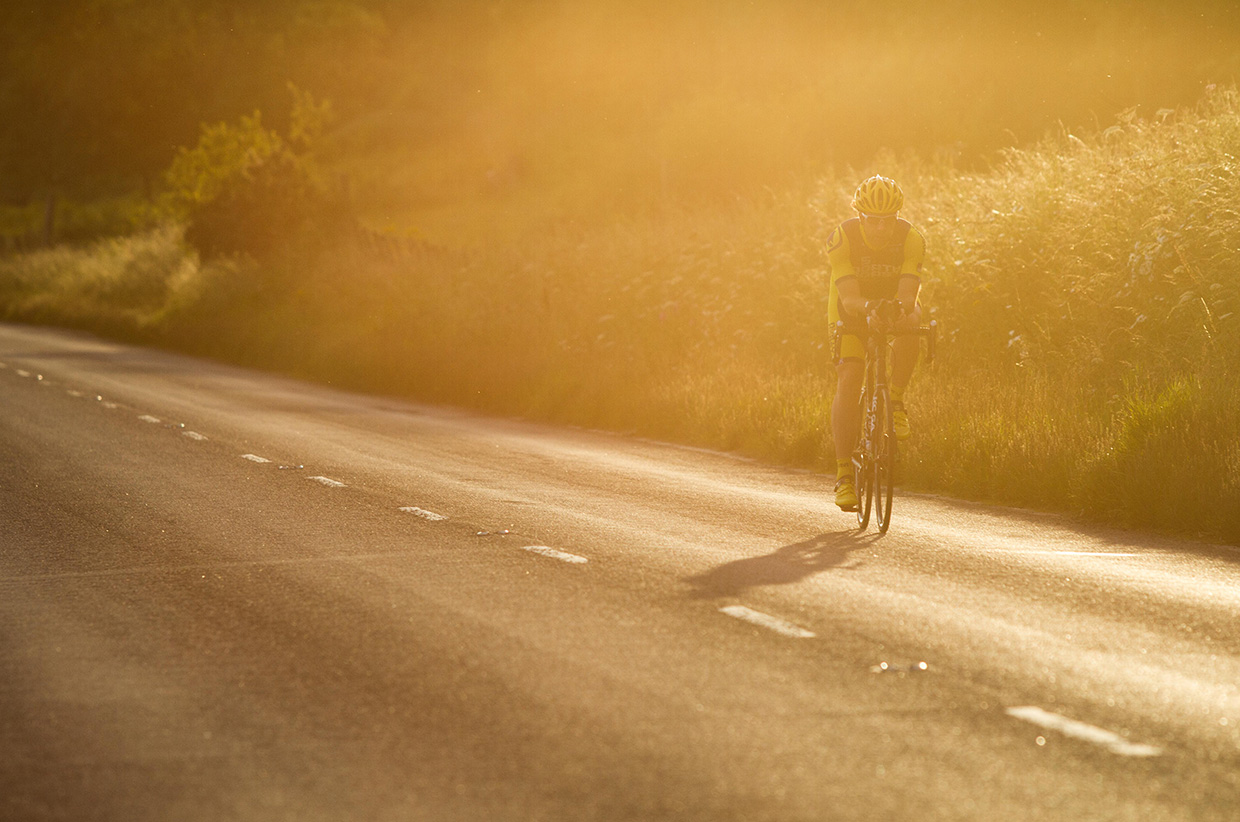 The NC500 has ever-changing scenery, and whilst the road down the east coast is bigger and relatively busier, it has its own beauty. Ruined castles amidst the rolling farmland, as waves crash ashore, oilfields scattering the seascape. The sea is rarely out of sight on this long quadrant south to Inverness.

I barely stopped, although the Berrydale climb and subsequent gorges reduced me to a walking pace, climbing out of the saddle. Seeing my heart rate souring to 160bpm after 34 hours in the saddle was certainly unwelcome. I was digging really deep, and riding into the unknown. I was now well into day two.

After 37 hours 58 minutes I climbed the final time to Inverness Castle with a police escort to a welcome by the Lord Provost and a good crowd. What a wonderful reception, not just at the finale, but also throughout. It was heartwarming stuff and made the daft mission all the more enjoyable.

I will admit it took a few sleeps to feel recovered and even longer before I could look at my bike again!