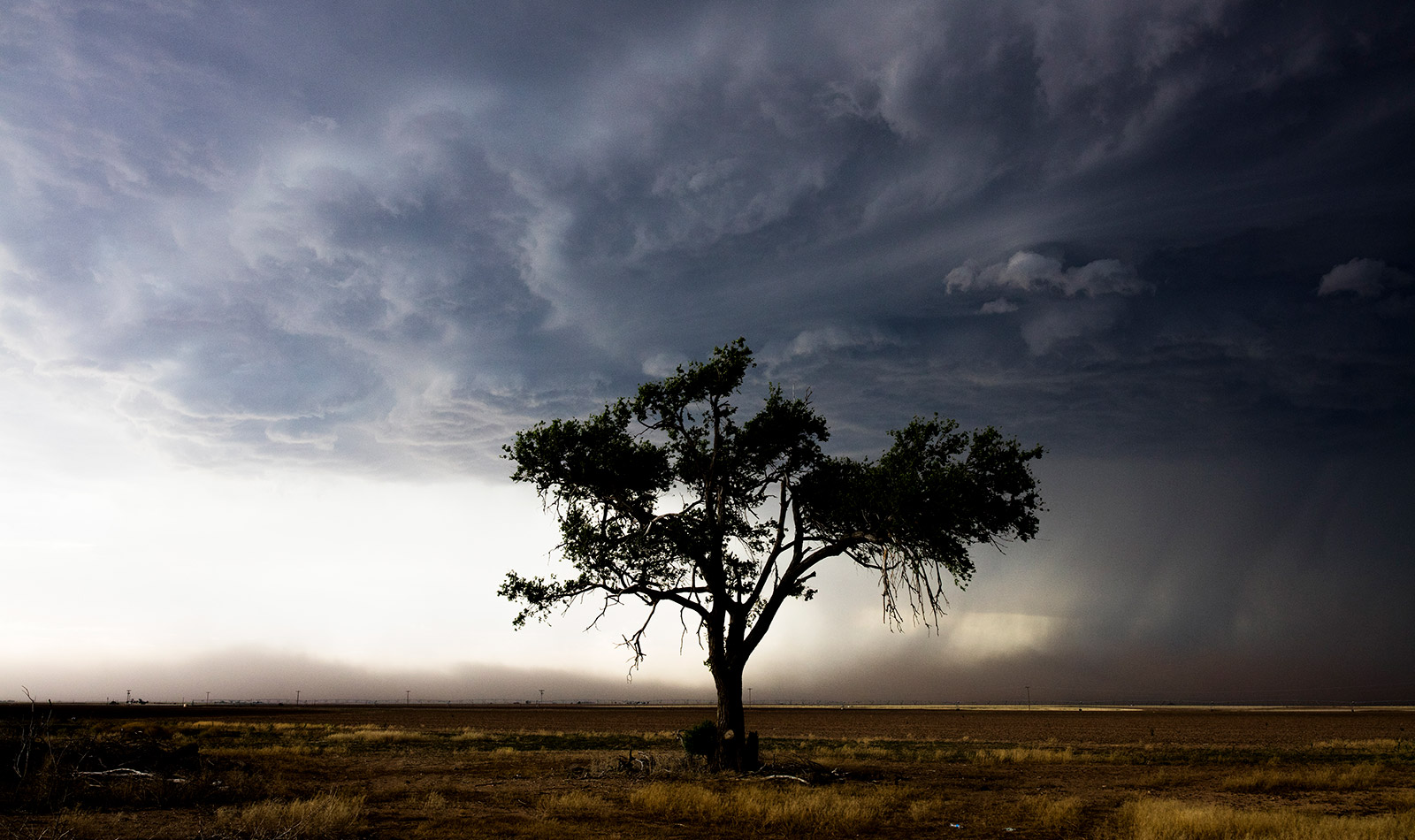 It’s deflating to watch a film I had loved years earlier only to find it doesn’t stand the test of time. I was relieved to see the 1996 cult classic Twister retained every bit of its vim and power, probably due to the performances of the late Bill Paxton and the always-fantastic Helen Hunt, and Jan de Bont’s intense, suspenseful direction. In the lead up to my first storm-chasing experience through the American Midwest with Australian photographer Nick Moir, aside from watching a technical introduction by Skip Talbot, I must have watched Twister at least three times. Throughout the film, as the tornadoes ascend through the Fujita scale, I felt like calling bullshit – five tornadoes in a day seemed like Hollywood excess. Nick soon corrected me: in some storm seasons, there might be as many as 15-20 tornadoes in a day. With 20 years of experience in chasing storms throughout Australia and the USA, Nick is the guru. A master of his art, a legend in his lifetime. His infectious attitude is enough to get anyone fired up about storm chasing.

And there was one particular moment when I knew I was well and truly hooked.

As our small crew, utterly exhausted, collapsed into beds or chairs in the latest in a long and questionable line of half-run-down motels, the screen of Nick’s phone glowed as he thumbed it feverishly, scrolling between multiple weather forecast and radars before choosing a target area for the next day. It was a gamble between western Colorado and the Texan panhandle as both areas showed great promise. Strong supercell systems were indicated, but Nick’s instinct sided with Texas. Our crew of five bundled into an SUV littered with 38kg of Trader Joe’s snacks, five cartons of La Croix, 12 camera bodies strewn about the upholstery, five laptops shouldering everything aside for space, and more hard drives than I could count. There were no complaints at the fast commute across multiple states, despite tiredness. The energy of those supercells was infectious.

As our small crew, utterly exhausted, collapsed into beds or chairs in the latest in a long and questionable line of half-run-down motels, the screen of Nick’s phone glowed as he thumbed it feverishly, scrolling between multiple weather forecast and radars before choosing a target area for the next day. 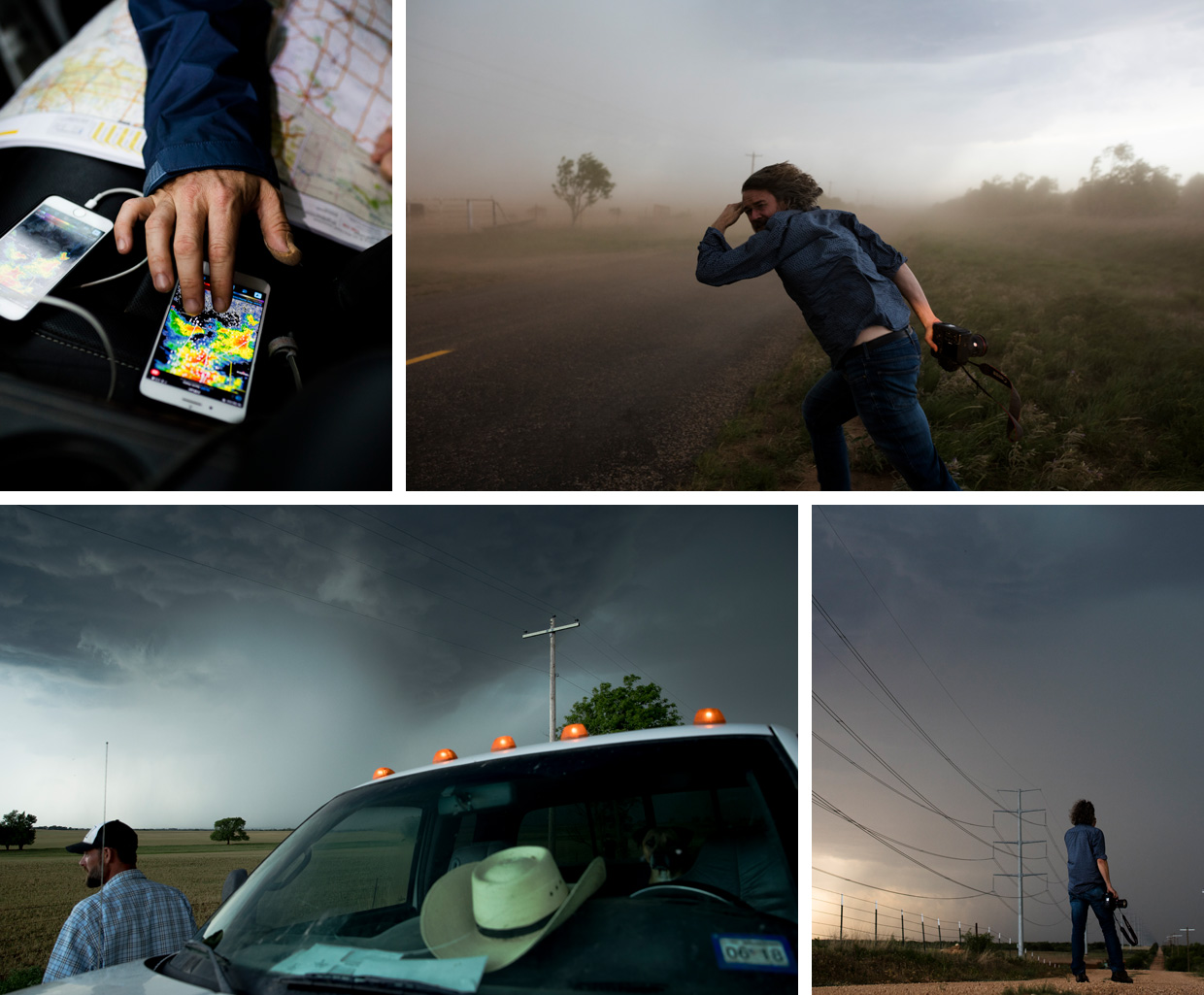 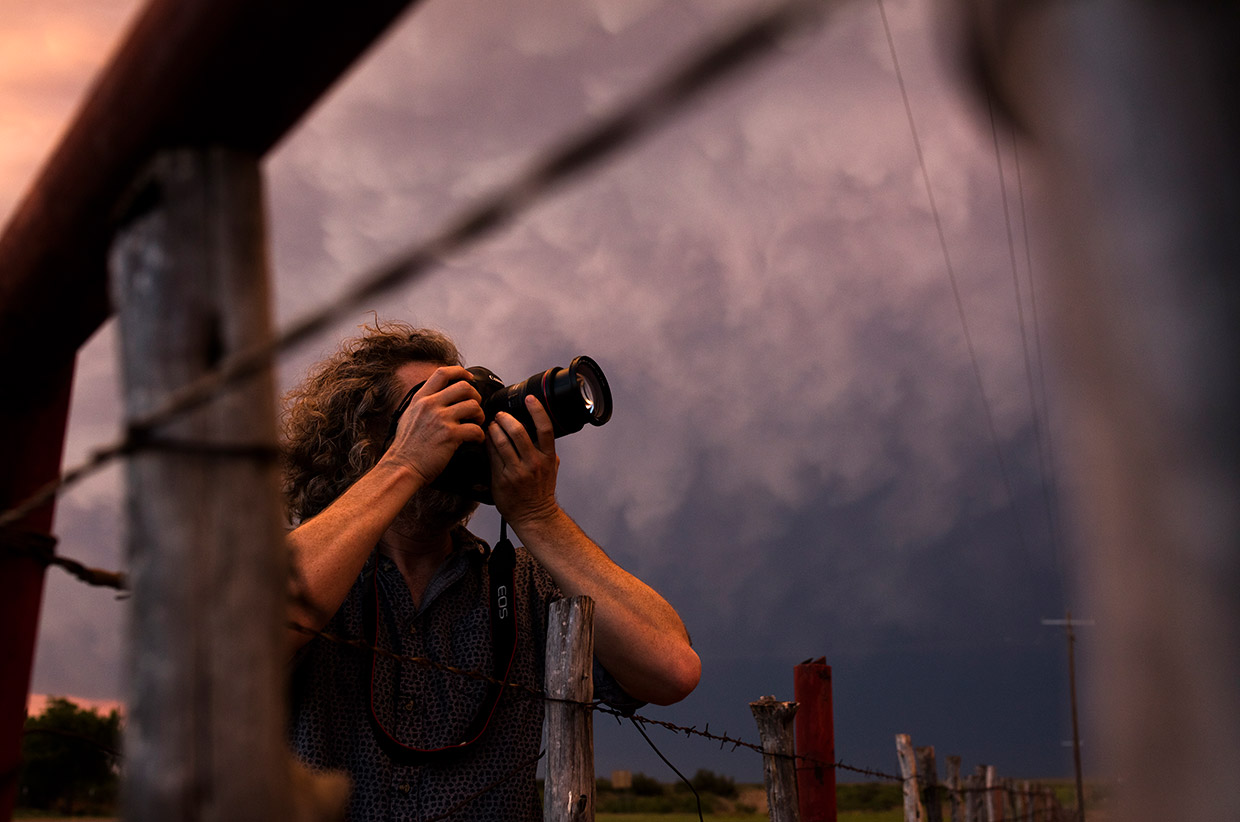 Anvils, colliding with the troposphere and given nowhere else to go, exploded. Pressure, humidity, and density combined and fought in the frigid cold and, since there was so little moisture with the anvil’s cloud, winds eddied freely.

Each morning, it was hard to imagine how a pure blue sky could be so innocent and yet produce catastrophic and beautiful storms that really earned their emotive nickname, the ‘Monsters on the Plains’. Approaching the target area, we pulled over into ghost towns, or off the side of a remote middle-of-nowhere road, never once losing phone signal. I watched Nick channel his inner Bill Paxton, studying the sky, arms weaving and dancing, mimicking the wind direction, seeking the internal harmony of that supercell. As I had taken on the role of storm driver, I desperately tried to grab whatever sleep I could, curled up in the driver’s seat. Small cumulus clouds began to filter into and across the bluebird sky. Anvils, colliding with the troposphere and given nowhere else to go, exploded. Pressure, humidity, and density combined and fought in the frigid cold and, since there was so little moisture with the anvil’s cloud, winds eddied freely. Its distinguishing feature, that face jutting out in front of the storm like a shelf, sometimes even shears backwards. The clouds took on that ominous shape when the rising air reached as much as 20,000m. Energy immediately began to shift, but the crucial lesson has always been not to give in to rookie temptation. Never race towards the biggest anvil.

While watching the radars, and shifting our gaze to the booming anvils, one system began to dominate the others and sucked their energy in, seething and binding itself, forming a supercell with the potential to become the most severe out there. Nick’s signal came and it was game on. ‘Yeah, we gotta go! Gotta move, guys!’ Adrenaline surged like the storms we sought, and we officially began our chase. Profanity and instructions were bellowed above the roar of the engine. No time for niceties when a supercell was forming overhead.

Pausing for a moment in amongst a sea of dusty crop fields, I looked above in awe and no small fear to witness a monster that felt unhinged as dark tones swirled into multiple vortices. Nick was on edge, too, trying to use every bit of his experience to predict where the tornado might drop. We cautiously edged forward in the car until Nick sent me back in the opposite direction. ‘No, stop!’ he shouted. Then, ‘Wait, turn around, OK punch it!’ I was about to move, when he shouted again: ‘No, stop! Turn around!’

It was like pinball, racing back and forth whilst simultaneously trying to avoid other adrenaline-charged storm chasers. As we headed south again, Nick lifted his head from the live radar on his phone and exclaimed again: ‘Fuck it! If we’re going out, we’re going out. Punch it!’ My fingers gripped the wheel so tightly my knuckles bled white. My eyes widened as the thought of being taken out by a tornado – truly being swept away by that brutal, uncontrolled violence – sunk in. But I didn’t feel any reason to doubt or question his direction. 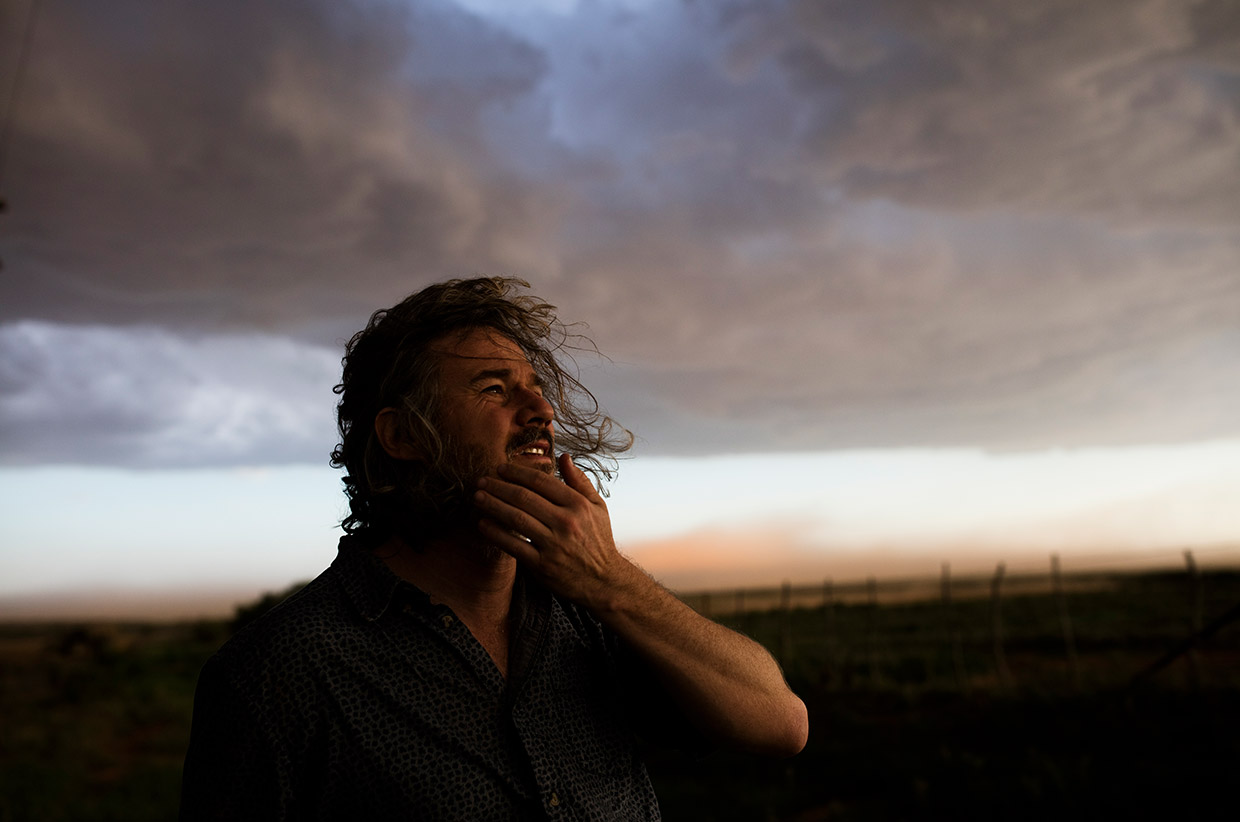 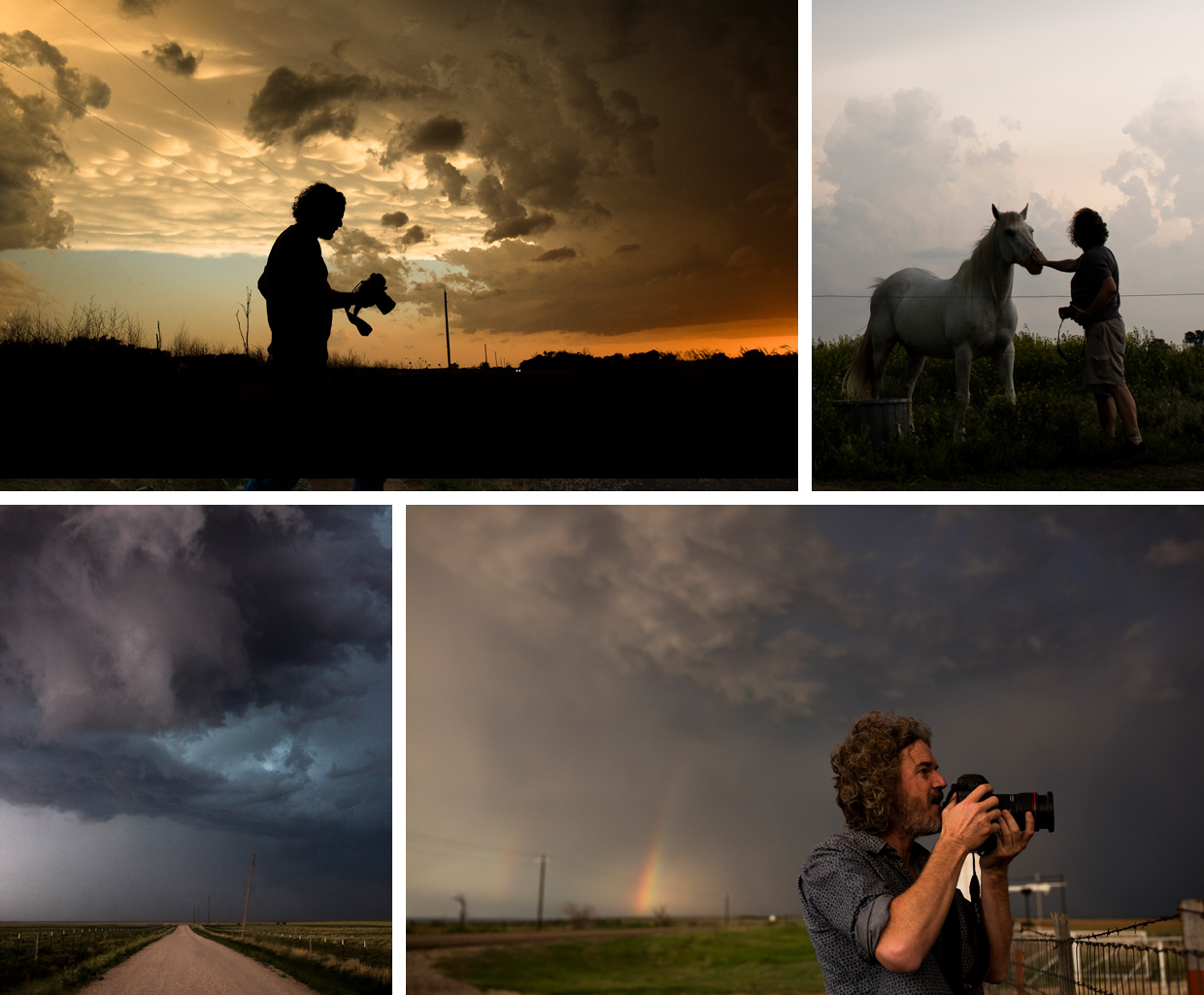 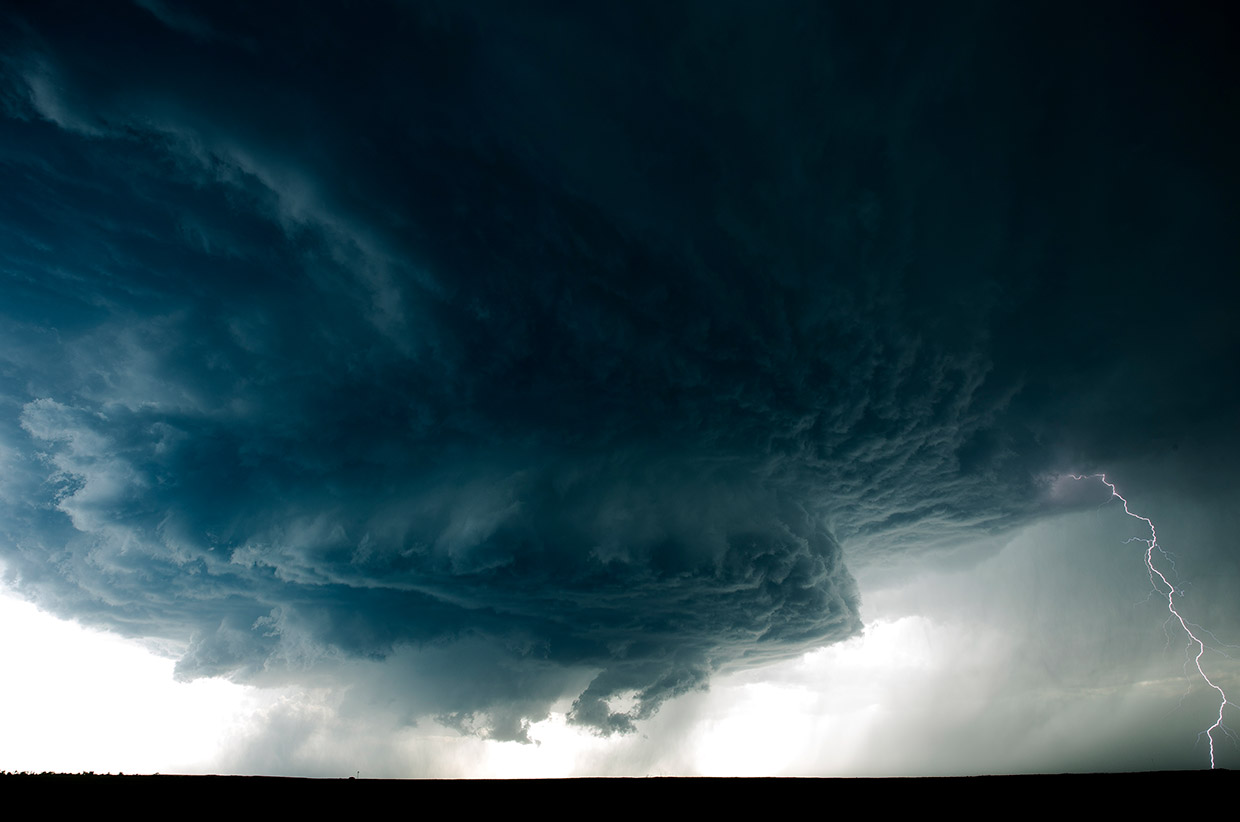 The dust billowed behind us, creating a small storm of its own, dwarfed by the leviathan we chased. Ahead, the supercell stretched for miles, a slither of white on the horizon delineating its monstrous edge. Then, suddenly, there it was. The dark swirling mass began to drop, my foot in beat with it dropping even a little more on the accelerator. We raced closer and, to our bewilderment, a landspout tornado began to form beside it. Chaos bloomed inside the SUV. Cameras jutted in every direction. It was tortuous for me, watching the crew exchange excited gibberish as I pounded the dash, knowing I could not shoot myself. But my role was as director – we had come to shoot a short film on Nick for Canon Australia and, therefore, it was not a priority for me to be shooting; rather, I needed to enable everyone else in the car to have as many opportunities as possible to gather footage. It did nothing to assuage my anguish, torn between driving and wanting to grab a camera.

Watching just one tornado, let alone twin tornadoes, was so mesmerising that I was desperate to soak up every moment; every twist and spiral, every spin and eddy. It was like no other experience, witnessing such chaotic and devastating beauty. As quickly as they had appeared, they dispersed back into nothingness. Our chase continued. We sped onwards for hours into the evening as the supercell swept east. Our choices for dinner limited to horrible fast-food outlets, the adrenaline wore off, and suddenly any motel would do just as long as we could lie flat. Greasy fries did nothing to sustain me and I lived in the memory of the majestic and violent spectacle, chatting with Nick about the day. I knew what a rare sight it had been. ‘I know I should be satisfied, Nick,’ I told him, ‘but… it’s just that I want to see another tornado.’

That was the moment I knew I was well and truly hooked. And Nick knew it too.

This story was first published in Sidetracked Volume 13