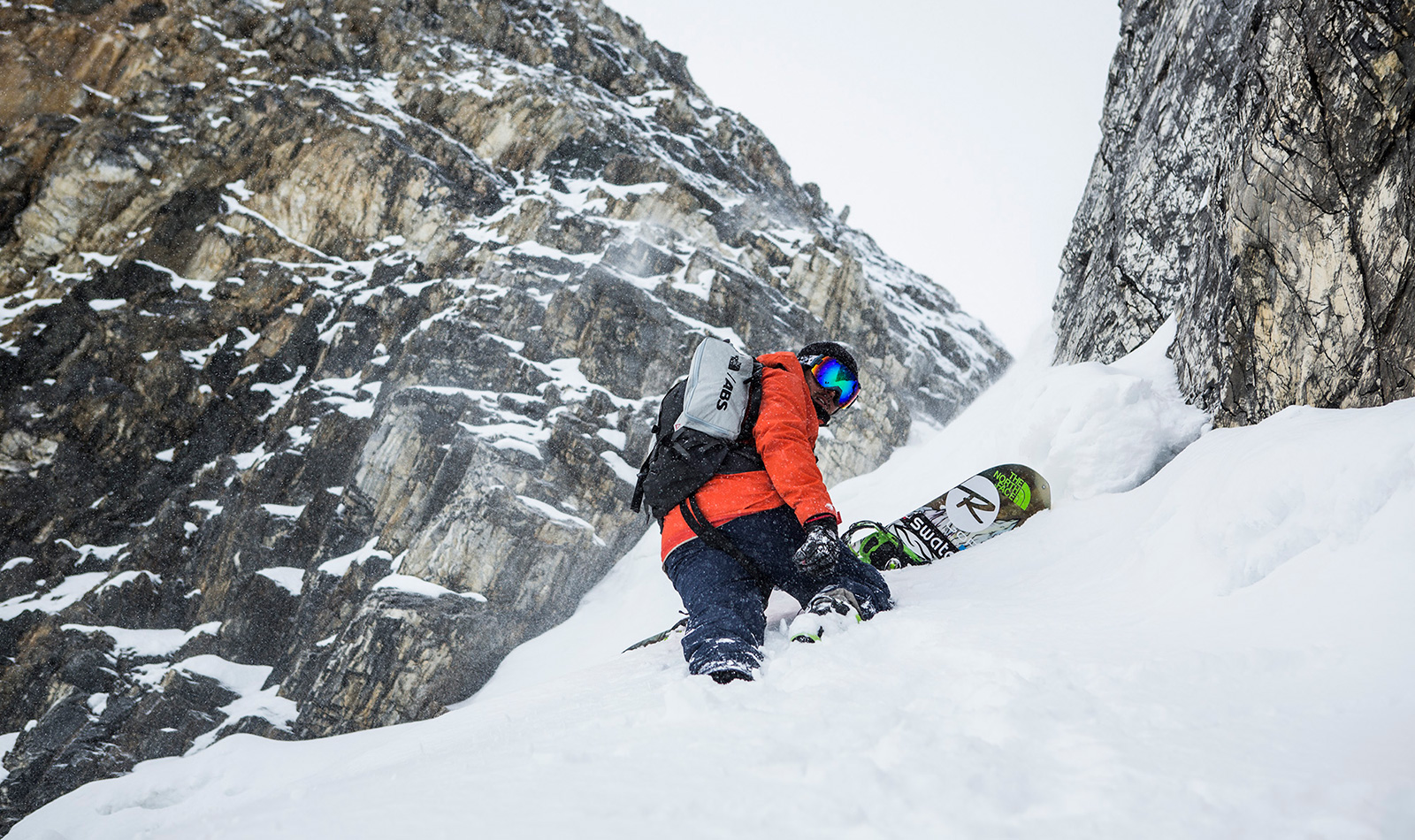 Kieran: Tell me how you came up with the idea for the Degrees North project.

Xavier: I’d wanted to go there for a long time, but Ralph (Backstrom) was the one to find a lot of good stuff on Google Earth. Google Earth is great for finding new locations as you can really see all the mountains. So we were like, ‘Fuck, this will be amazing.’ We came up with the idea of really opening Alaska in a completely new way. Most of the pro productions that have gone there in the last 25 years have done things the same. In the last few years people have started to get dropped off by plane in the middle of nowhere, but I’ve never seen anything that fits the picture in my head of a real spiny face with the sea in the background, and living on the boat. I think that will be a cool adventure.

Fantastic. You’ve got both Antarctica and the Arctic – are you aiming to finish this year, or are you thinking that this could almost be an extended project?

Yeah, we’ve done Mission Steeps already, and it kind of closes the circle. The project after is going to be fully autonomous with a drone, no external cameramen. It’s going to be called DIY, do it yourself. Then I’m just going to cruise around the world making webisodes and then a full film, completely self shot. I’m starting shooting now and then next year will be something more official.

Let’s talk about Alaska where, as you’ve said, there are so many lines that are untouched. Some climbers have taken a look, but from a freeriding point of view it doesn’t get touched at all. Are you almost doing a line across the world and saying, ‘OK, here’s our scope, this is what we can do’?

For this trip we were trying to get really epic snow, and I can’t find another place like Alaska that has this kind of epic snow. I was really trying to look in Russia and the Kamchatka to see if there could be something similar but I couldn’t find it. I love the idea of going to the Mecca and completely reinventing it – I love that.

And when you were shooting down in Antarctica, in a place of such massive scale, was that a logistical nightmare?

Yeah, all these trips – even Alaska, it’s not run-of-the-mill stuff. You have to research, and people aren’t used to doing that, so they think you’re crazy. You still have to be committed to your vision, and it’s kind of tough. Right now that’s what I’m into, pulling everything together and making sure that everything works well. We have quite a big team: nine people, including Ralph Backstrom and Samual Anthamatten, then the crew.

Tell me about the iceberg. How did you judge whether or not it was safe to ride? Did you just give it a whirl and see how you got on?

Actually the captain was quite nervous about it, because he said they can tip any time. We got up there and these crazy winds started, and he got really, really nervous – ordered us to come back. We wanted to do it again but he didn’t let us do it. 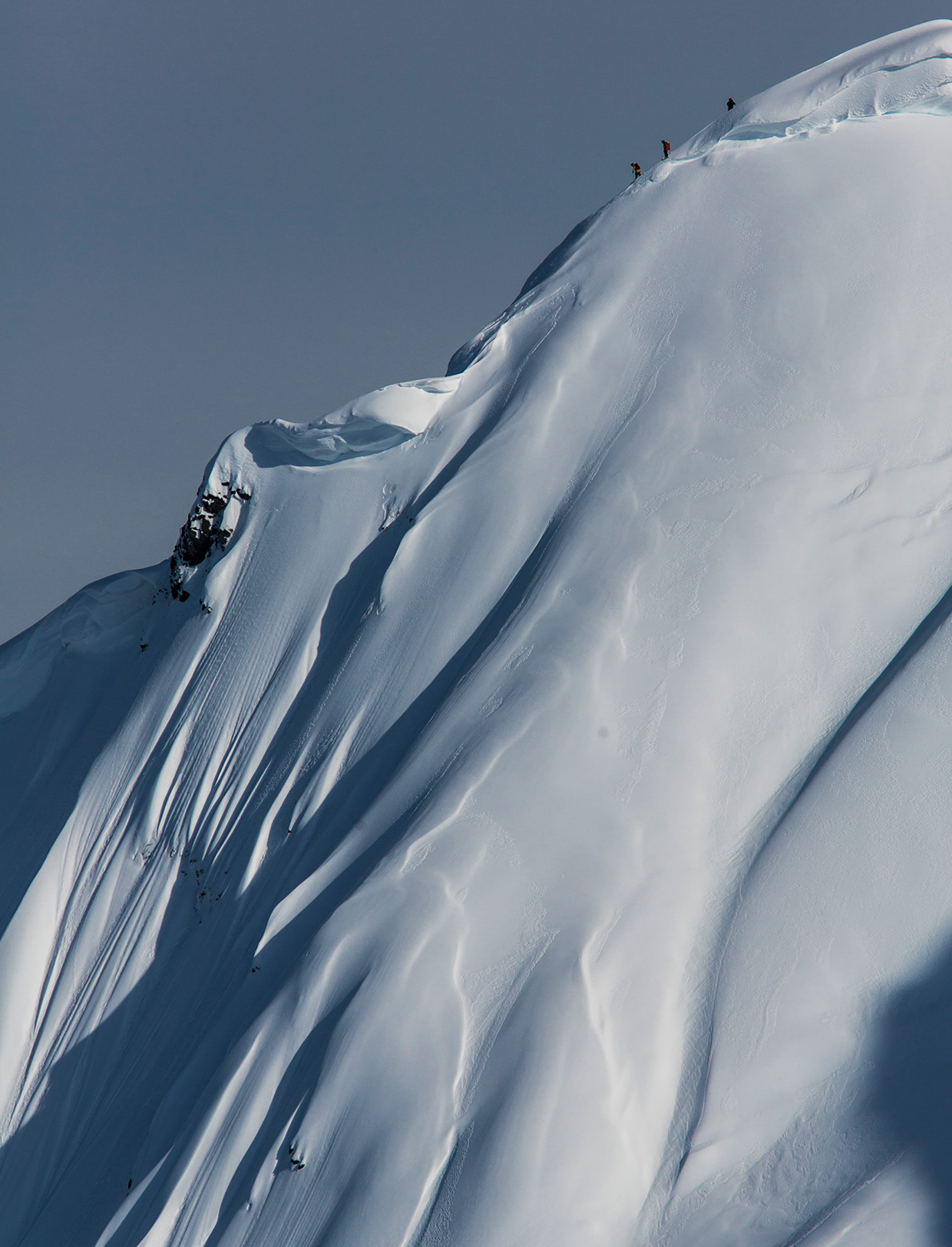 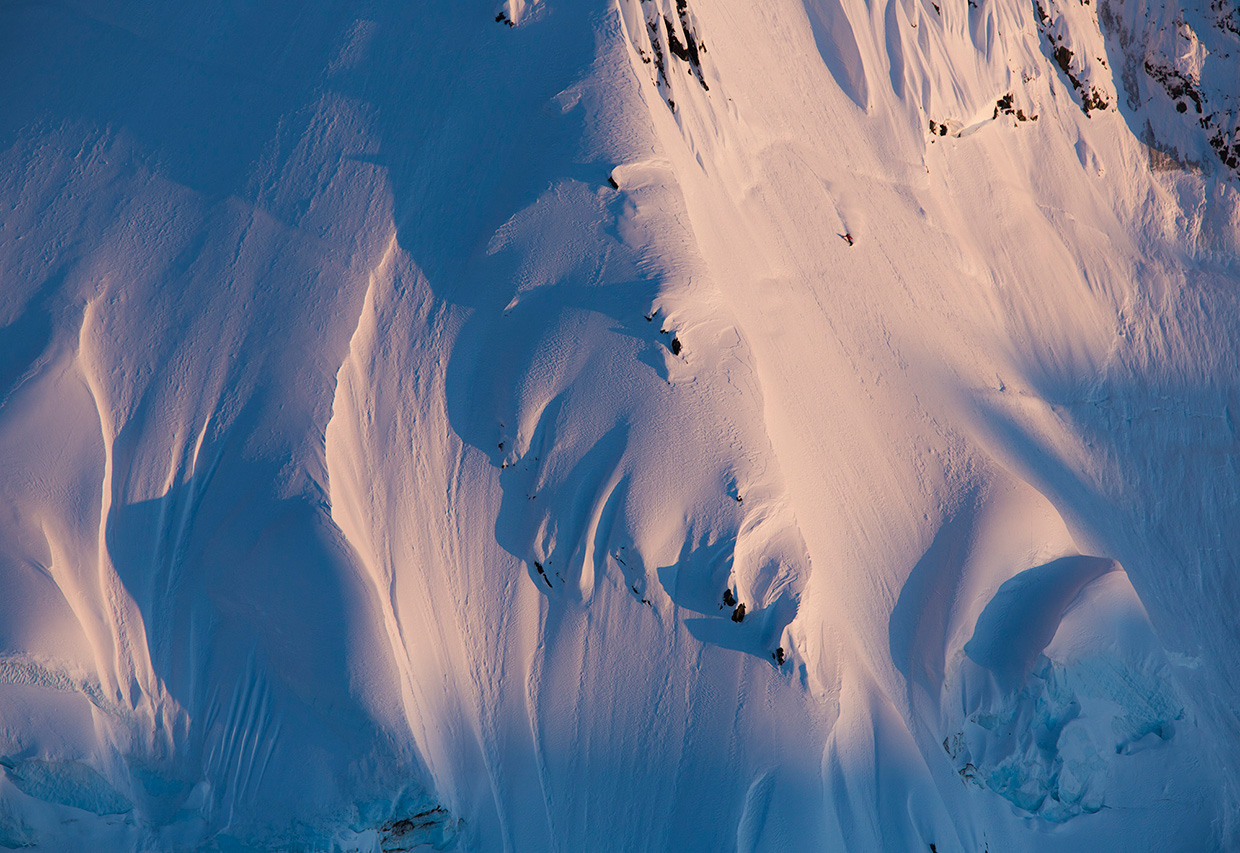 So the Degrees North project is a really big vision. Bigger than going to the usual spots and shooting the usual things. What drove you to say, this is what I want to do?

I don’t know … you just look for some inspiration, and the more stuff you do the more ideas come – the kind of ideas that speak to you, that you feel inspired by. I just don’t like to do the same things over and over. It needs to be different every time and I think it’s more interesting to share that with people through film. A few years ago, when we were camping with Jeremy for Deeper, we were so close to the sea and we just gazed out at all these beautiful mountains. ‘God, I wish…’

I wish I could ride one of those.

Exactly. And then in Antarctica we discovered the pleasure of being on a boat, choosing your lines and worrying about the water, and I liked that so much. I think it’ll be really cool to combine it with the crazy snow of Alaska. It’s a natural thing for me to be attracted like this by the sea and by mixing the two elements together. But maybe it’s a bit tricky with the weather – maybe we only get storms. Lots of uncertainties.

When you’re at home now do you still have the same drive to pick out new lines, close to where you live?

It depends. Sometimes I’m quite conservative and I like to take it easy, but yeah, I guess I like to go and look for the naughtiness when I go riding. I often ride on my own because I like to go on crazy missions and put myself into bad places. Taking somebody else with you on something like that is a responsibility.

And the two guys who are going with you to Alaska, do they have different goals in mind? I know you all want to do similar stuff, but everybody’s riding style is different.

No, I think we’re quite similar in some ways. I think we’re going to pick up pretty much the same things. There might be a few changes, but we’re all in the same film.

What makes you choose a particular mountain? Is it aesthetics, is it steepness?

I think it’s aesthetics, combined with my vision of what I could be doing on it. There’s no set criteria, it’s just something that speaks to me. But for sure it’s based on aesthetics. It’s definitely not the mountaineering way of looking for the most difficult, the steepest, the highest.

So you look at a mountain and think, that would be a lovely line to ride down? 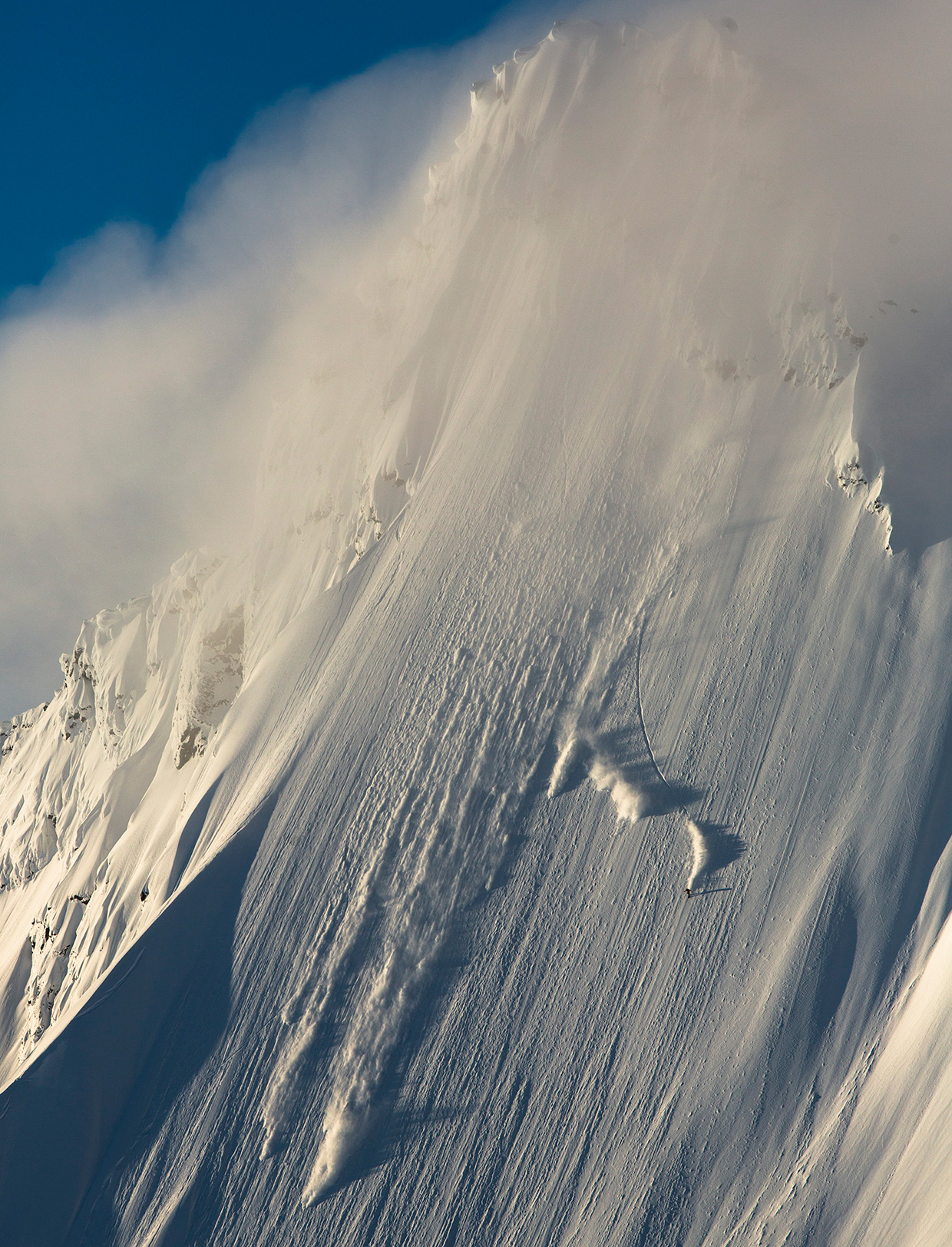 Together with director Guido Perrini documenting the journey on paramotor wings, Degrees North brings a new vantage point to the audience and gives them a fresh way of experiencing the adrenaline rush of freeriding in some of the world’s most stunning locations. Screenings will be held this Autumn at select locations and film festivals around the world including the Kendal Mountain Festival. Watch the trailer here. View more of Tero Repo’s photography in our Degrees North Photo Feature. 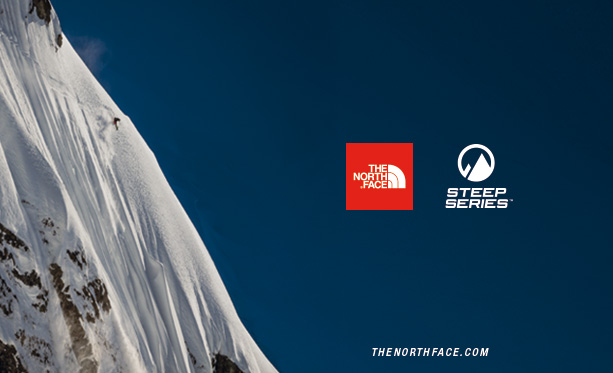 Produced in association with The North Face.
For more information visit thenorthfacejournal.com/degrees-north
Transition Lost Then Found 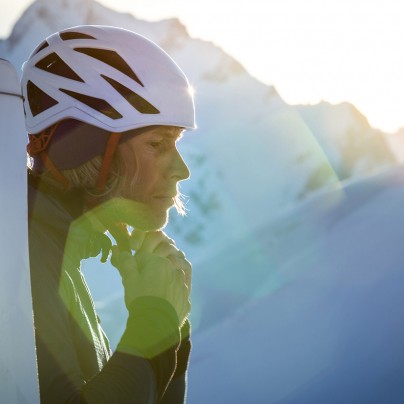 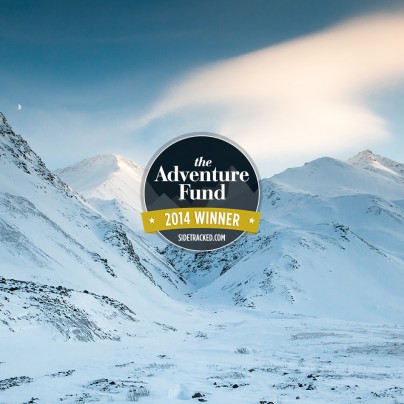 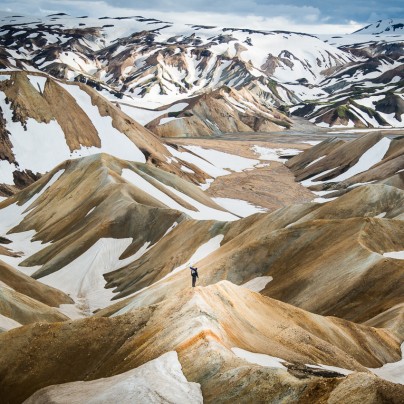