An Interview With Alex Hibbert 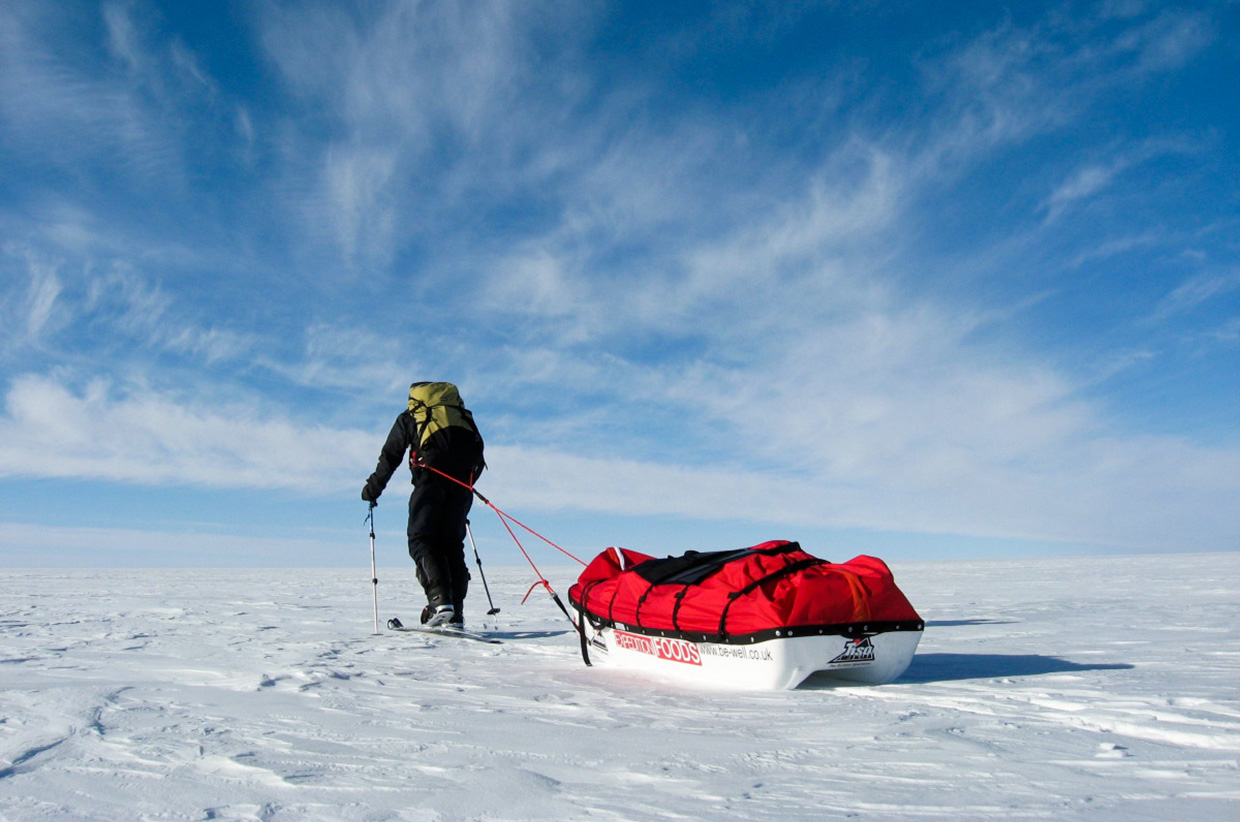 In a world seeking genuine heroes – people willing to inspire and push the boundaries of human endurance and understanding – it is perhaps fitting that 2013 seems about to become the year of the Young Explorer. With National Geographic publishing its list of Emerging Explorers in 2012 and much of that list dominated by young men and women, it would appear now is a time for inspiring by example. Perhaps modern western cultures seek to move away from the vacuous hedonism of reality TV but exploration and science seem to have gained a foothold in an otherwise short attention span.

Science is at the forefront of human exploration and endeavour – an exciting time mirroring the 19th Century’s insatiable public appetite for knowledge and empirical understanding following the scientific revolution and leading into the industrial revolution. Now, climate change, the search for cures to serious disease, the study of ancient and long-lost cultures – in the finest traditions of the The Beagle, all require explorers and adventurers leading expeditions to dangerous and inhospitable parts of the planet to unlock the knowledge and understanding we require. With this passion, we learn more about the human body, its capacity for mental and physical endurance as well as the changing landscape beneath our feet and above our heads.

One of the most exciting young adventurers is Alex Hibbert. Having sacrificed what some might call a normal, safe existence, Hibbert has joined the ranks of those who seek to push those boundaries. Between December 2012 and March 2013, he and his expedition companion, Justin Miles, will each drag in excess of 400kg the length of the Nares Strait, and back, completely unsupported. Their aim is prepare and set depots for a subsequent phase in preparation for their final goal of reaching the North Pole unsupported in winter. The Pole has also never been reached from Greenland – the final main route is, as yet, untravelled but more importantly – no one has reached the North Pole in winter, unsupported.

This interview with Alex Hibbert is the first in a series of features in which Sidetracked examines the purpose behind adventure and expeditioning, and why we need it now, more than ever. 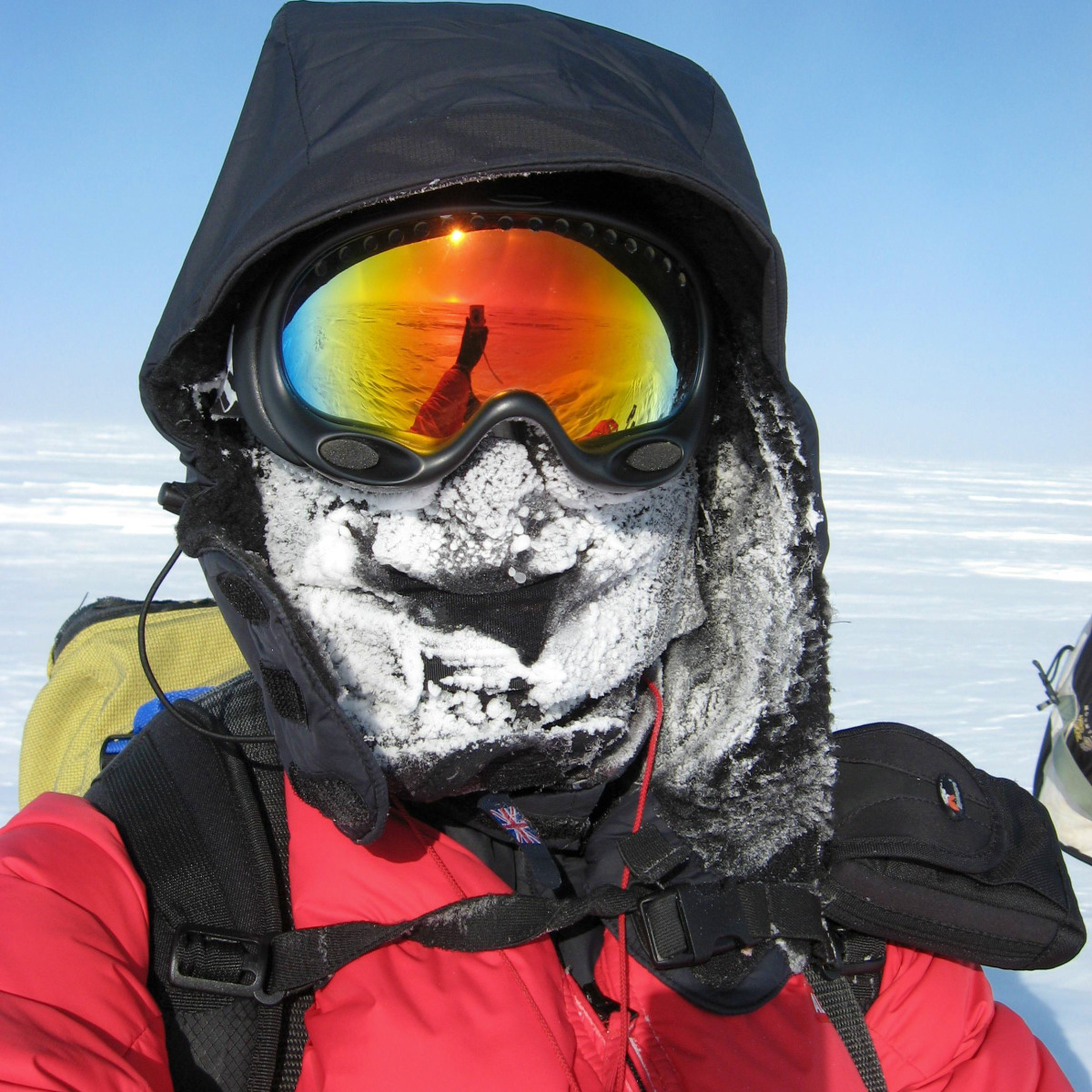 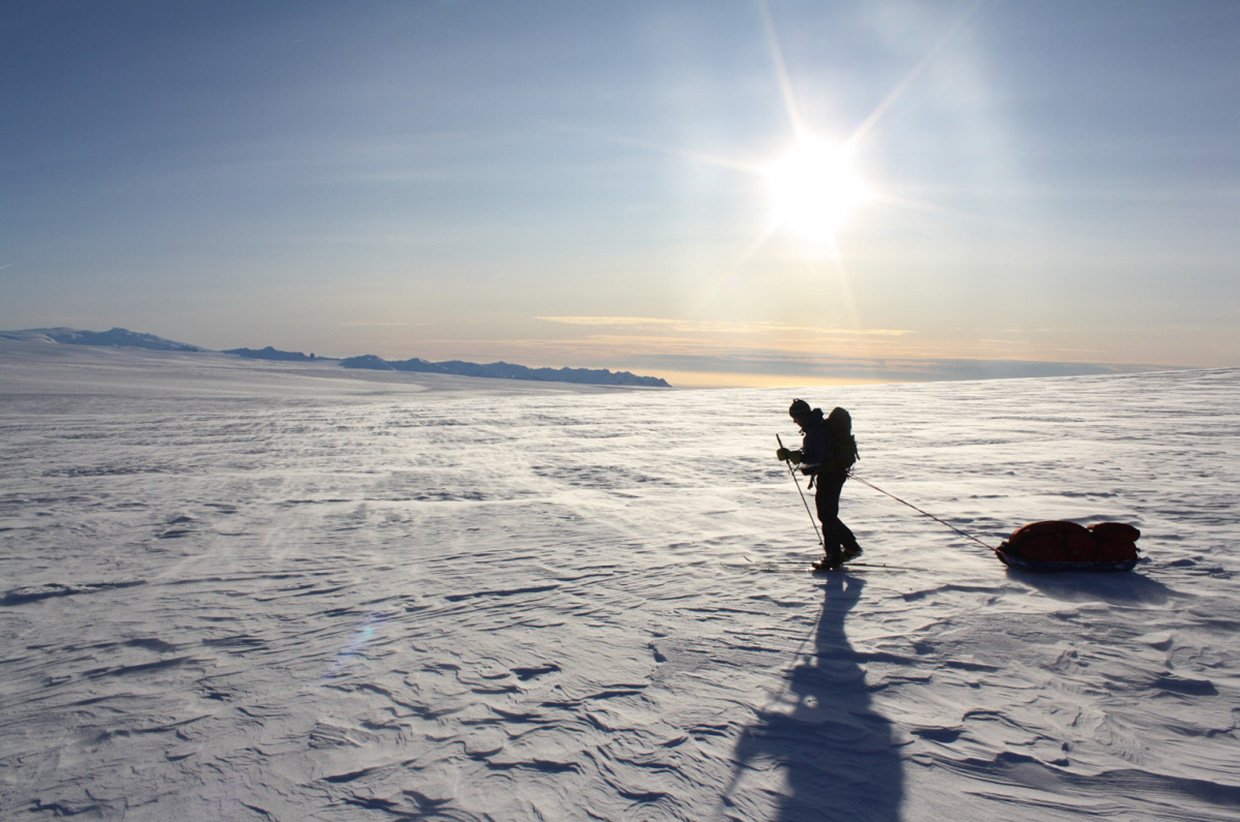 Sidetracked: What first ignited your interest in what has now become the Dark Ice Project?

Alex Hibbert: The idea of combining the most difficult aspects of polar travel; darkness, winter, unsupported style, sea ice and tough, long new routes has been at the back of my mind for a few years. Circumstances made it the two stage, priority plan it is now.

Why did you choose that particular arctic challenge as your next expedition?
Conditions surrounding both our start point in the Nares Strait and the Arctic Ocean itself are deteriorating each year. There is therefore a major pressure to get on with a project which needs the full length of the winter/spring season before it becomes impossible.

What do you hope to achieve from the expedition?
I want to show that a winter route through the straits is feasible for an unsupported man-hauling expedition and also that an expedition with this amount of uncertainty and sheer difficulty is possible.

Why have you chosen to be unsupported in the way you have?
A number of reasons – firstly that of style and principles and secondly due to the impracticality and cost of winter air-drops. Vehicles and dog teams would also be hard to run due to the distance involved.

On your blog, you describe the level of “complete lack of real-time dialogue with the global audience [on your previous expedition]” as “simply unthinkable now” – why do you consider real-time dialogue to be so important?
I think a journey like ours is somewhat pointless unless the experiences can be shared. I don’t go on expeditions to ‘find myself’ or to ‘explore my personal limits’ – I go on them to allow me to achieve new things and tell stories via the spoken and written word and also through imagery.

What do you think expeditions like this one achieve in the wider context of society as a whole?
This extension of the why question is something I’ve tackled before. In summary, if someone is to say that a polar expedition has no point, he or she must also ask themselves the following questions: do they listen to music, watch or play sport or visit the cinema? If the answer is yes, they must instantly boycott all of these things. That includes reading this article or any other website apart from the news, weather or wikipedia. None of these things have ANY biological purpose of any sort – they are pointless too. I think in short, there is no point beyond the point of most other things which enrich the fabric of life – creativity, music or anything not related to day to day life. Some people will already have decided that there is no point in any context, let alone that of the whole of society. This is fine, but I prefer to concentrate instead on those with wider horizons as it’s more fun to share making things happen with positive people.

Why have you chosen the Apple Set-up you have for comms?
We wanted a reliable and ‘all-in-one’ solution with quality components and batteries. We’ve found a way to operate Apple products using gloves and in cold temperatures with humidity gradients and so fingers crossed it will do the job!

What camera equipment will you be taking and how will you protect it?
I usually use Canon 1D and 5D series bodies but the constraints of weight, light levels and power supplies mean we’re going compact. Dehumidified large-sensor compact cameras with HD-video and GoPros are the order of the day.

I think a journey like ours is somewhat pointless unless the experiences can be shared. I don’t go on expeditions to ‘find myself’ or to ‘explore my personal limits’ – I go on them to allow me to achieve new things and tell stories via the spoken and written word and also through imagery. 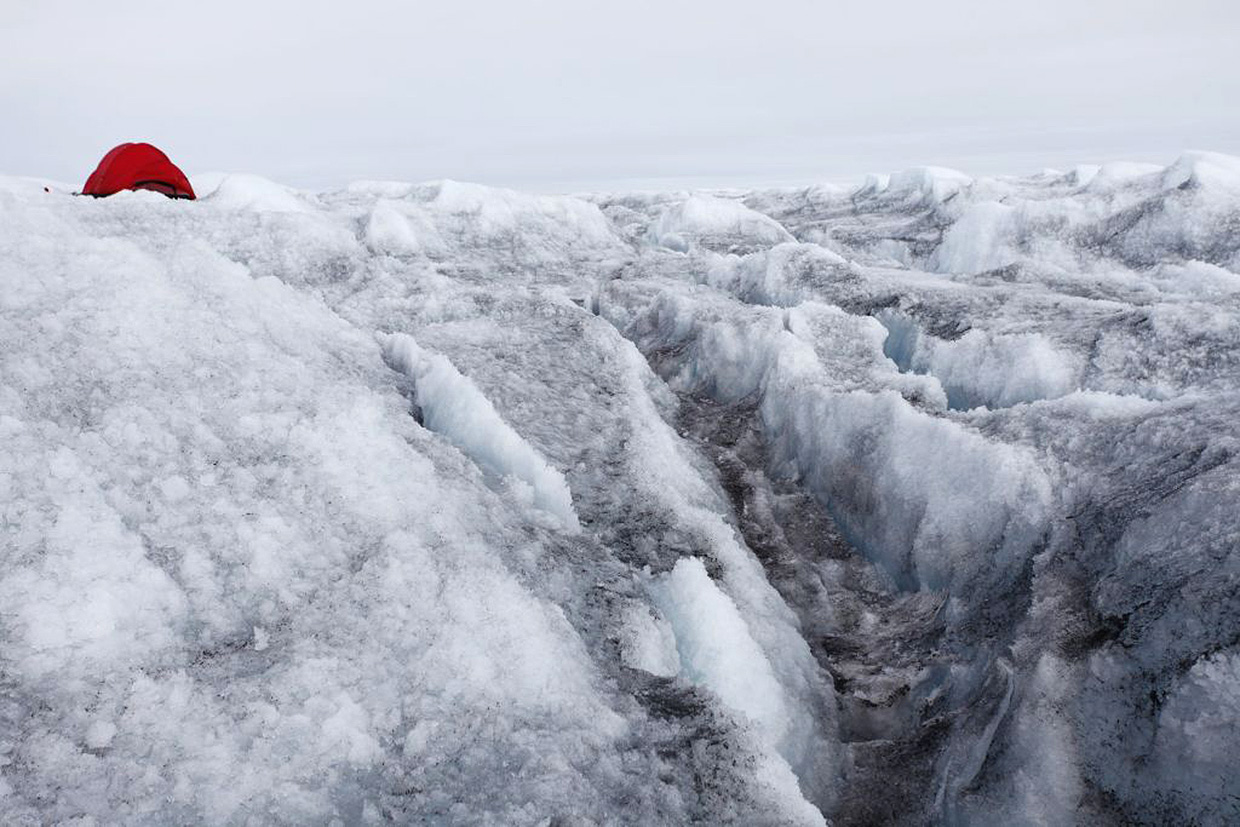 From a practical perspective, what has been the greatest challenge for you in preparing for Dark Ice?
The highly intertwined challenges of out of season permits, freighting large amounts of supplies with limited backup strategies and designing a plan which has to take over half a dozen major changes in direction into account. Compared to previous expeditions, the complexity of this one is on a new scale!

How much training will you need with shotguns and how much genuine concern do you have about polar bears?
There is a major threat. The straits contain most of the factors that are attractive to bears – coastal sea ice, land, open water and large marine mammal populations. Weapons handling isn’t an issue for either of us due to our backgrounds and previous work. Avoiding having to use these last resorts is the real skill.

What sort of emotional challenges as a team do you expect to face and how will you overcome them?
There will be that moment when we’re tired and hurting but a long way from the finish. At that point, we will need to pull together and push through, keeping a sense of humour if possible! The lack of light will be difficult too, but is inherent to the challenge.

You are described as having “enviable levels of focus, motivation and drive” – where does this come from and how do you cultivate it?
I’m not sure where it comes from and it’s not something to take for granted! I have moments of self-doubt like any human being but a good dose of self-awareness, perspective and confidence tends to allow me to keep going. Those three attributes are easier to pursue if you simply love what you’re doing – it’s not so much of a chore.

How much, in reality, do world records mean to you – are they a mark of your achievements or simply a means to gain credibility and funding for your next expedition?
Most records you read about are indeed obscure and often need to be accompanied by pages of small print but there are a few pure targets and firsts out there. It’s not fashionable these days to list anything other than charity, inspiring youth or science as a driving force, but I see nothing wrong in wanting to do something that has never been done by a person before. It’s a special feeling. Good sponsors tend to echo the sentiments of those they support and these are the people I have built up great relationships with. The days of overhype and lies to get logos on front pages are hopefully over or at least, easy to uncover.

When did the passion for exploration and adventure first start?
I developed a love for the outdoors, endurance sport and having a blank canvas whilst at school, from the age of fifteen or so. University then gave me the freedom to begin to spread my wings and think big.

How did you use your years at Oxford University to further those aims?
I did certainly give up a certain amount of academic time in order to pursue my polar goals and I think in hindsight that those formative three years were critical. I met lots of great people and learned a great deal about how to put together complex plans and bring good teams together.

What’s next for you?
I have a long series of expeditions planned for the long term and details will be released as soon as they are confirmed. These are almost all dedicated to unsupported travel over new routes and large distances at both ends of the globe.

Most records you read about are indeed obscure and often need to be accompanied by pages of small print but there are a few pure targets and firsts out there. It’s not fashionable these days to list anything other than charity, inspiring youth or science as a driving force, but I see nothing wrong in wanting to do something that has never been done by a person before. It’s a special feeling.

At 26, through tremendous hard work and perseverance, Hibbert is already an accomplished explorer. He holds the world-record for the longest fully unsupported arctic journey in history, crossing 1,374 miles of frigid Greenland. He is a fellow of the Royal Geographical Society and a member of the New York Explorer’s Club and a professional photographer. A twice published author, in the winter of 2012, Hibbert also presented a documentary from the Inuit communities of Eastern Greenland and attempted a winter crossing of the notorious Icelandic Vatnajökull icecap. His link to the communities of Greenland, and his love of their landscape and culture is a strong one.

Like so many people seeking a different perspective on the world he lives in, Hibbert has thrown off the trappings of modern living to explore it instead. Yet, it is not all about records, long distances and unsupported winter crossing of inhospitable landscapes – what Hibbert is doing is just one example of what adventure and exploration brings to all those who engage in it: an understanding of the world, the people who inhabit it and our place within it. Whilst Hibbert makes his way across the dark ice of an arctic winter, many others will be exploring their own parts of the planet and having their own adventures and science, humanity and the environment can only benefit as a result.

Crossroads: Adventure and The Past in Bosnia and Herzegovina An Interview With Simon Reeve 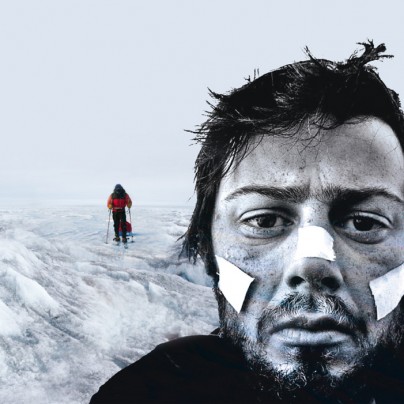 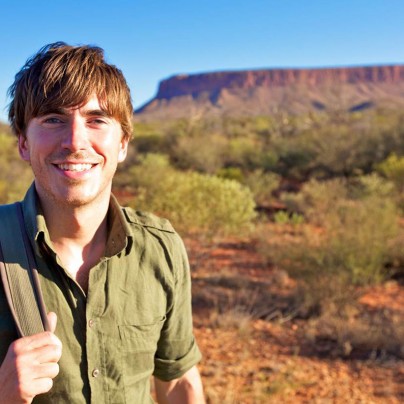 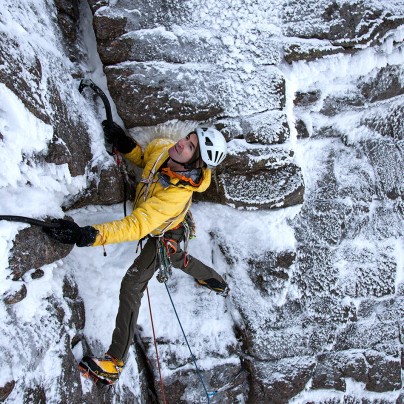 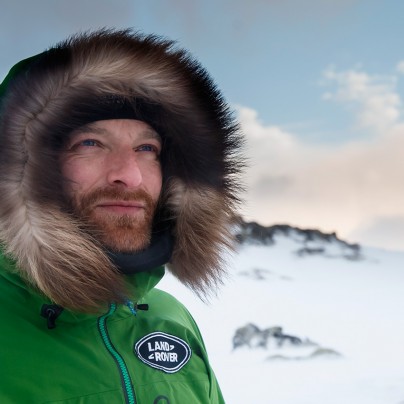 Pushing The Limits An Interview with Ben Saunders 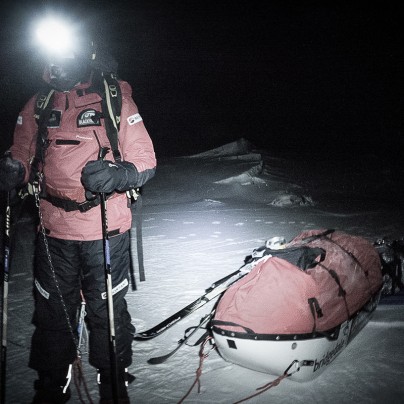