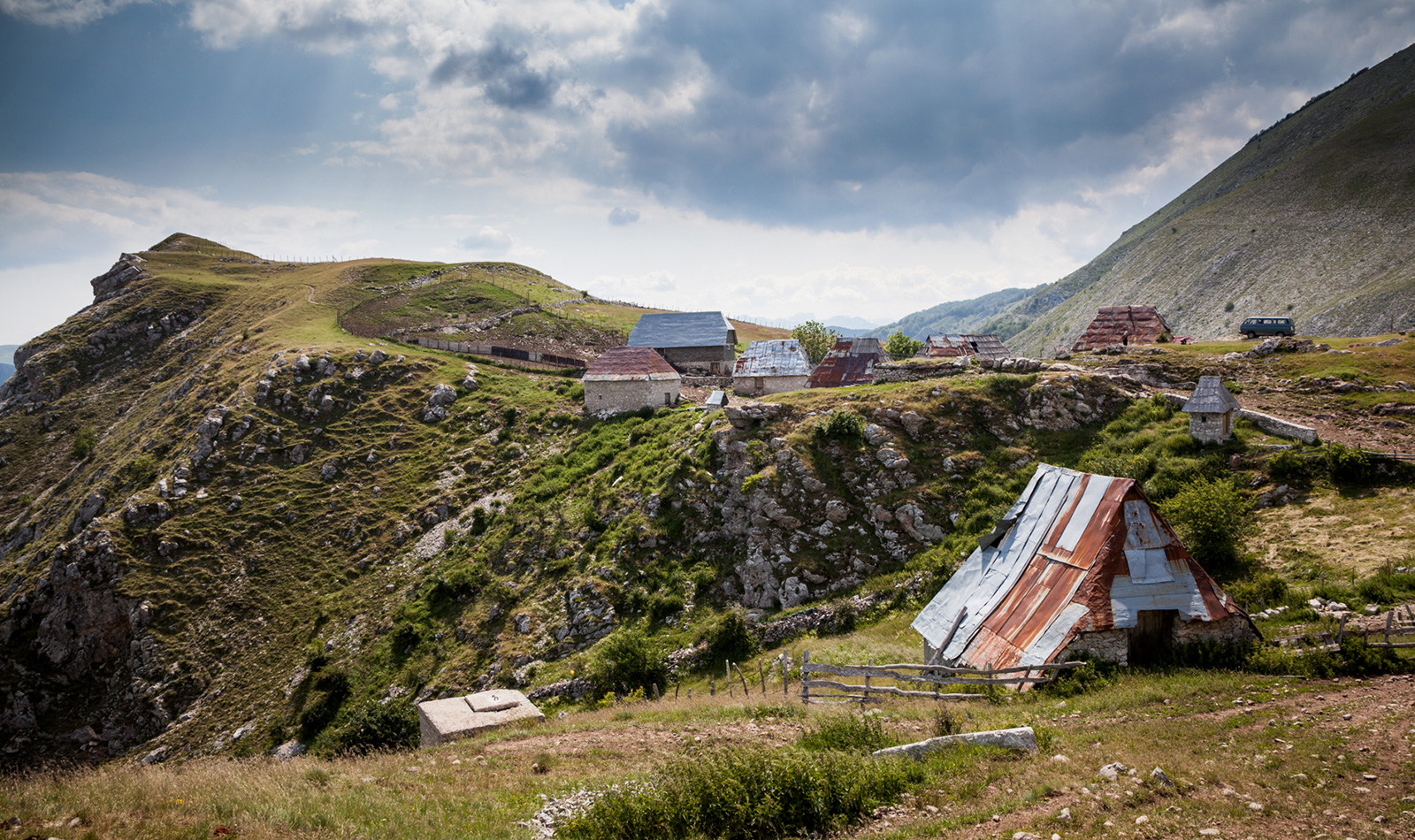 Crossroads: Adventure and The Past in Bosnia and Herzegovina

“This area you must avoid,” Lorenc says, pointing to the valley way below Lukomir where we are headed. “The bridge was destoyed so you cannot cross the river. And there are landmines around the trail.”

The Czech guide approaches us with a little hesitation. He seems embarrassed to be asking, but knows how important it is he gets this right. His group’s safety is in his hands. We sit on top of the summit of Obalj in the Bjelašnica massif at 1896m, bathed by the warm sun, as charcoal clouds gather across the valley. Lorenc smiles a welcome and leans over the map, chatting to him in Serbo-Croat. The map is a print from the internet, one of the best places to get detailed maps for hiking in Bosnia and Herzegovina (BiH). The Austro-Hungarians created the basic trail maps in the area as they sought out precious metals and minerals to mine. Beginning in 1892, they marked the trail the villagers were already using. The Yugoslav National Army (JNA) then created two sets of maps from these – 1:50,000 available to all and 1:25,000 maps which they kept classified. During the war, maps simply and inexplicably disappeared. Fortunately, some of the 1:25,000 had leaked into the public domain and were placed on websites run by enthusiasts. It was one of these the Czech was holding.

Seeing me express an interest, they switch to English. “This area you must avoid,” Lorenc says, pointing to the valley way below Lukomir where we are headed. “The bridge was destoyed so you cannot cross the river. And there are landmines around the trail.” The Czech guide nods but seems curiously nonchalant. Lorenc and I speak about it later and we both agree, we hope he took Lornec’s warnings seriously. It would be wrong to think of BiH as a place infested with landmines at every turn. But they are present. Mountains, and the trails leading through the undulating countryside, were military targets, tactically important to each of the myriad sides in the conflict in 1992-1995. The JNA usually marked the placement of mines as a would be expected of a professional army. Other factions did not. So many areas of countryside are still being cleared. Most are marked out with signs and fencelines. Some are not. All trekking benefits from local knowledge but, in BiH, it is essential.

The saddest thing is the wider perception of the country. I am a British Citizen. I was born in a British Dependent Territory but I have lived in the UK since 1976. My father is a Krajina Serb. We have spirited discussions on the conflict. I spent two years studying the conflict as part of my postgraduate study in international criminal law and the law of war. I know the history and I know the place. Yet, until a representative of Green Visions contacted me whilst I was making plans for the summer, it had not crossed my mind to travel there to hike. National Geographic made BiH one of its Best Adventure Destinations for 2012, yet it remains almost unknown. Few tourists can be seen on the trails who are not Croat, Slovenian, Serb or Bosniak. Yet it has so much to offer. Eastern Orthodox missionaries arrived around the 8th or 9th Century. Franciscans came shortly thereafter. Then the Ottomans arrived and introduced Islam. Finally, the Austro-Hungarians came and introduced their own brand of Victorian sensibility and practicality. The region has long been a crossroads for religion and commerce. The most compelling explanation for what happened in the 90’s. Sarajevo and Mostar, for example, still bear the scars of conflict. Yet Bosnia and Herzegovina has always been a crossroads – a meeting place for cultures, religions and travellers. When those differences are throw into that melting pot, the resulting broth tastes great to some and not so great to others. Variety is the spice of life. 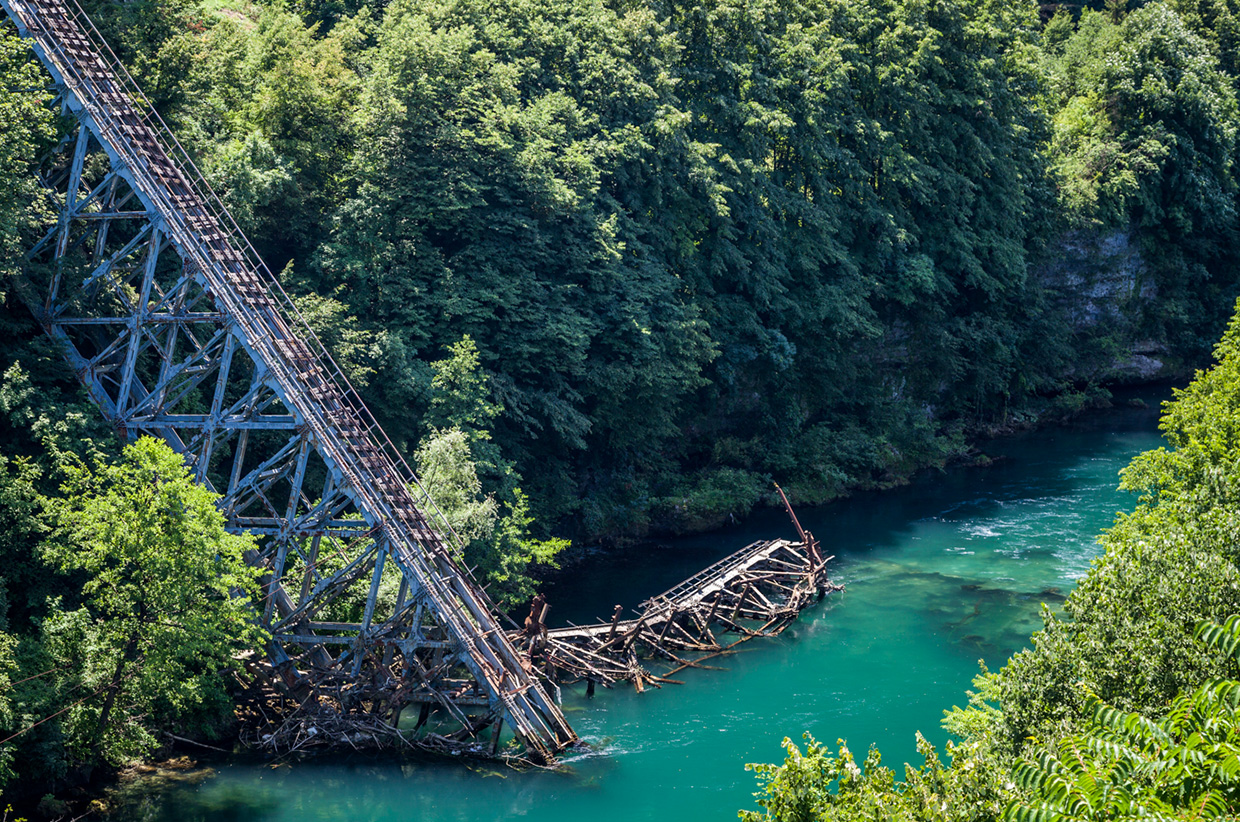 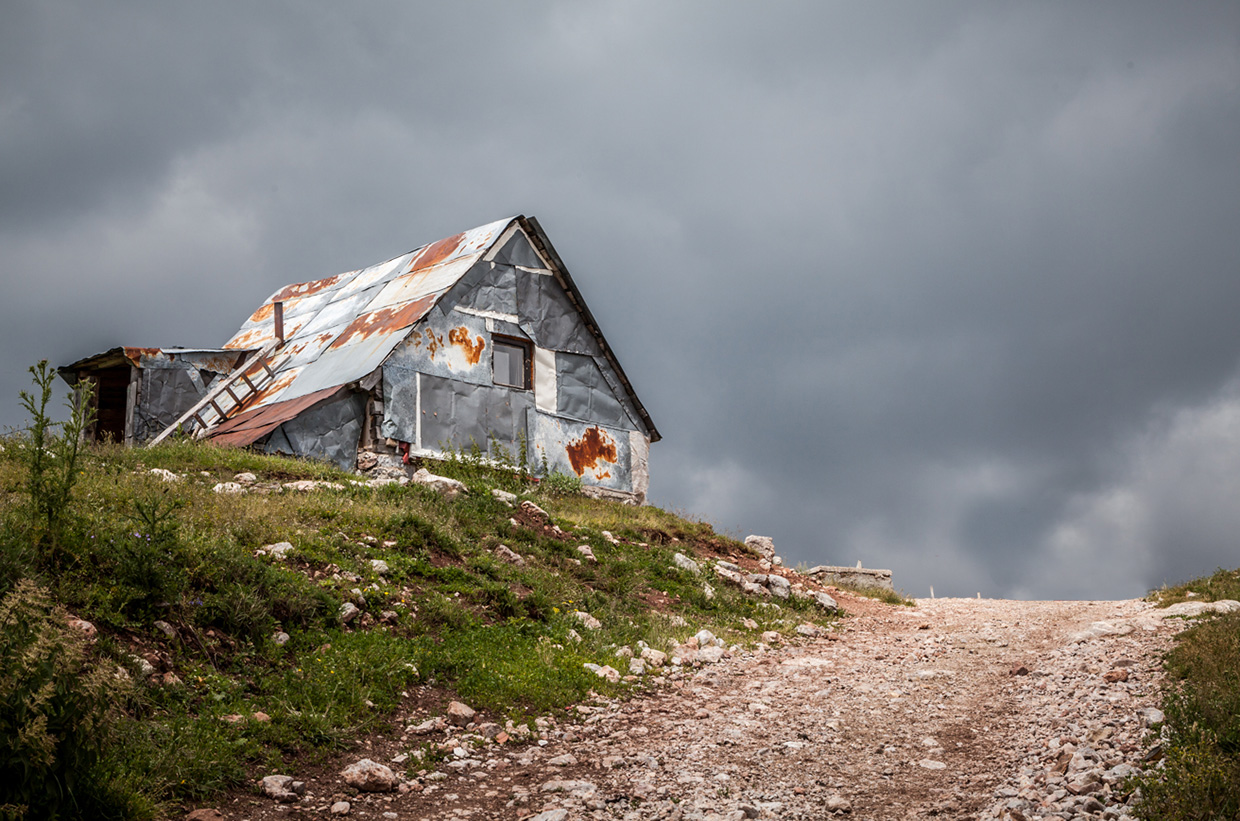 And history is just a small part of its allure. Maglić, the highest peak in BiH at 2386m, is part of the breathtaking Sutjeska National Park which also contains one of the most unspoiled ancient primeval rainforests in the world. Sutjeksa was also, during the Second World War, the scene of the Battle of Sutjeska, an attempt by the Axis to destroy the Yugoslav Partisan forces led by Tito. And there are a number of white-water rafting camps on the banks of the Tara River, stretching all the way into Montenegro. The canyon created by the Tara is one of the deepest in the world.

When we trek down to Lukomir, the highest semi-nomadic Bosniak village in Bosnia at 1496m, we are greeted with smiles and a heart-warming welcome. As well as some Uštipci, a kind of fried donut dough which is delicious and warm enough to have just come out of the oven. We talk to the villagers about what life is like and they tell us things have changed a great deal recently. They need more support from the government, they say. There are many who live in the mountains in villages like Lukomir. During the conflict, they fled but eventually returned to ruined homes and land which needed to be re-worked to make it arable. Former ‘enemies’ now try to support each other. Many tour companies would rather pay Bosniak families for supplies – vegetables, cheeses and the like – than go to supermarkets. Co-operation between the various factions in the conflict now sit next to each other in bars and openly discuss what occurred. As Sulieman, a friend of Lorenc’s put it – he watched a Croat soldier attempt to rape his sister. Another Croat soldier pulled him off and beat him for it. “How can I say I hate all Croats, that all Croats are bad,” he asks, “when I have seen that? All people are different.” It is impossible to draw lines between people and place them in this camp or that. Serbs fought alongside Bosniaks and Croats in Sarajevo, only to be vilified by their families after the conflict for doing so. One of Lornec’s friends trekked through Montenegro after the conflict. They met some guys in a bar and began talking about Sarajevo. Both were in Sarajevo at the time of the conflict, they discovered. Both were on the same street, the confrontation line. Both were fighting. Both knew, exactly, the location of a small shop with a blue front. One was sure it was on the left. The other, equally sure it was on the right. They realised they had been facing each other. Shooting at each other. For months. After a few drinks, to them it no longer mattered. It was time to move on and prevent the hate from destroying yet more lives.

As Sulieman, a friend of Lorenc’s put it – he watched a Croat soldier attempt to rape his sister. Another Croat soldier pulled him off and beat him for it. “How can I say I hate all Croats, that all Croats are bad,” he asks, “when I have seen that? All people are different.” 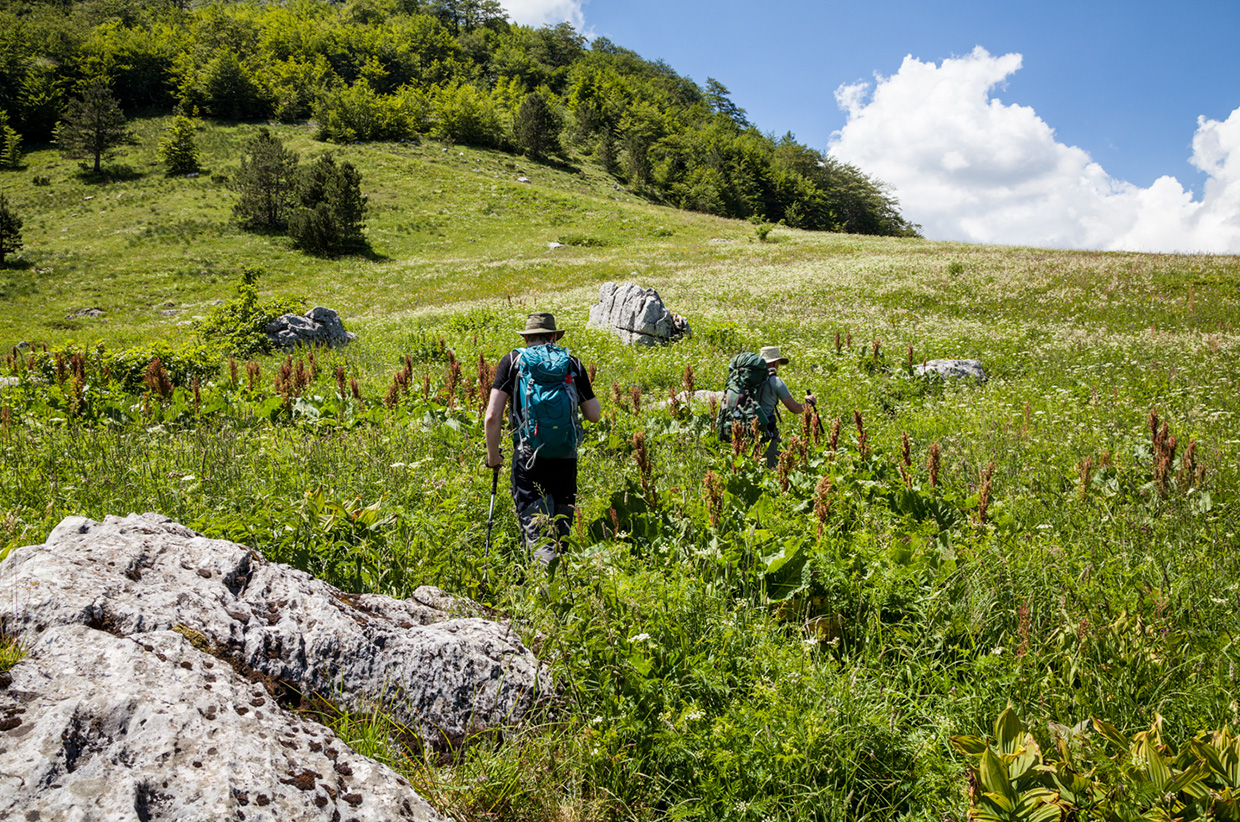 Over the eight days I am in BiH, I hike for four. In Sutjeska, we hike up to the summit of the Uglješin Vrh at 1859m, a wonderful saunter through tall grass punctuated by vibrantly coloured flora, and then a steep climb with magnificent views stretching into Montenegro and across the National Park. Maglić, imposing and intimidating, can be seen in the distance. The forest in Sutjeska is its greatest draw. Spruce and Fir climb forty or fifty metres high and the sylvan canopy paints everything with a supernatural splendour. We spend the evening having dinner in a bar opened by a Forest Ranger who looks after the Primeval Forest. He tells us about his encounters with bears and wolves, among others and proudly shows us photographs. Being guided through ancient, unspoiled wilderness by a man like him is something to come back for.

The storm drifts in; the danger is nonchalant and random. At one point it is directly over us. Lightning scorches the earth less than 30m away, the crash of thunder and blinding white searing light utterly simultaneous.

We also climb Maglić. The hike up and into the massif is a pleasant one though spruce and fir. It feels almost like Christmas. Shafts of white sunlight cut through the branches and leaves. We sit for a moment, on a curious bench, staring up at the monster ahead of us. It looks so far to the summit. The ascent is steep. Along the trail, parts are almost via ferrata with cables bolted into place. Hands on stuff is necessary too, and for good distances. Concentration is important but let’s not overplay this. This is not Ines Papert territory. However, my pulse is racing and Maglić has begun to weave its spell. We know the weather may be tricky. Mist hangs on the summit and darker clouds gather to the west. The rest of the ascent is grassy but steep. Wet and slick, we struggle to find purchase and foot placement is key. Then the ridge opens up. Montenegro to the one side and Bosnia and Herzegovina to the other. The do not dawdle on the summit, itself a testament to confederacy with the flags of both BiH and Republika Srpska.

Fog shrouds us and steals from us the rewards of the ascent. The wind direction has changed and the hollow rumble of thunder chills our hearts. Now we know it needs to be a swift descent. But we are caught. The storm comes in quicker than we could have anticipated and we find a depression away from the ridge. Lightning crashes ten seconds before thunder. The anger is close. We sit on our packs, feet together and heads stooped. Then the hail comes. The storm drifts in; the danger is nonchalant and random. At one point it is directly over us. Lightning scorches the earth less than 30m away, the crash of thunder and blinding white searing light utterly simultaneous. I stare at two small, yellow flowers. I think of both my sons. I wonder, almost absurdly idly, whether I will see them again. Or whether something I can do nothing about will tear me away from them. An ephemeral break allows us to put on something warmer as hypothermia begins to draw a chill finger across our bodies. I am shivering hard. As the second wave of severe weather beats us, I grow more cold. Without an insulation layer, I would likely have been in serious trouble. Thank god for coreloft, because it’s raining and I’m still ok. 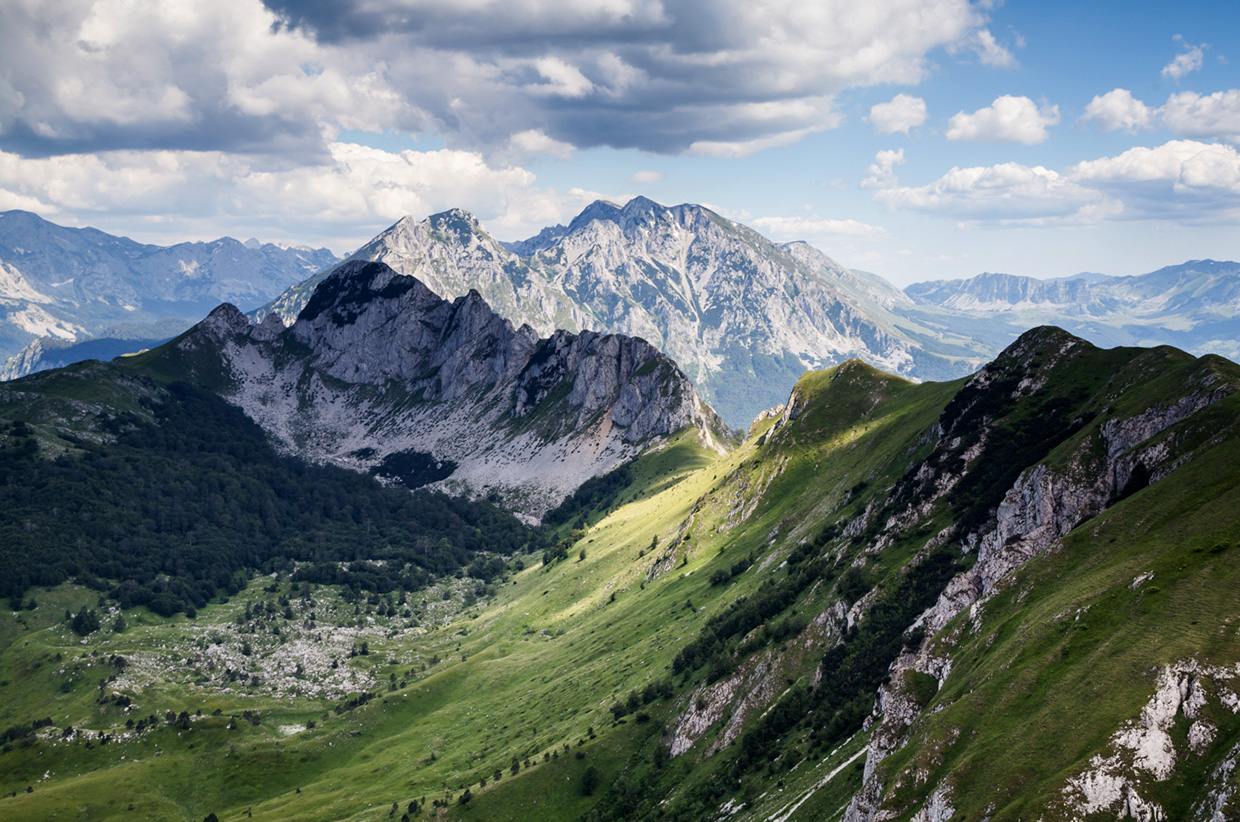 Eventually the weather passes. Not enough for us to be safe, but enough for us to get down to lower ground and the relative cover of the forest next to Trnovačko lake. The rain and hail continue but we are comfortable now. Out of harm’s way and making progress. When we arrive back at the white 4 x 4 which will take us back to our digs, our Serb driver hugs us and utters a few curses. A van sits nearby awaiting news of its passengers. They’re glad we’re out of it too. I look up at Maglić and, of course, the summit is clear and beautiful.

I was fortunate to have been guided by a superb, learned and unfailingly balanced guide called Lorenc Konaj from Green Visions in Sarajevo. He gave me more time, frankness and displayed more integrity, when discussing the difficult subject of the war in 1992-1995, than I could possibly have expected. My thanks to him, and to Thierry Joubert for the chance to experience this wonderful country. Also, thanks to USAID and the Adventure Travel Association for funding and arranging the trip.

Across the Arctic Blue Night An Interview With Alex Hibbert 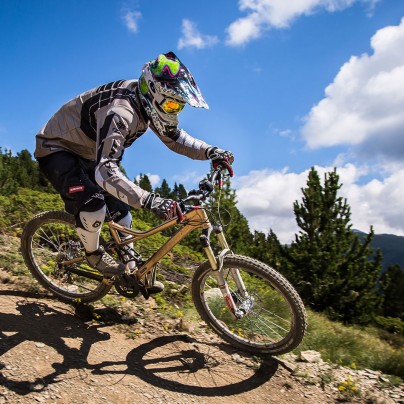 Living for Adventure An Interview with Manuel Bustelo