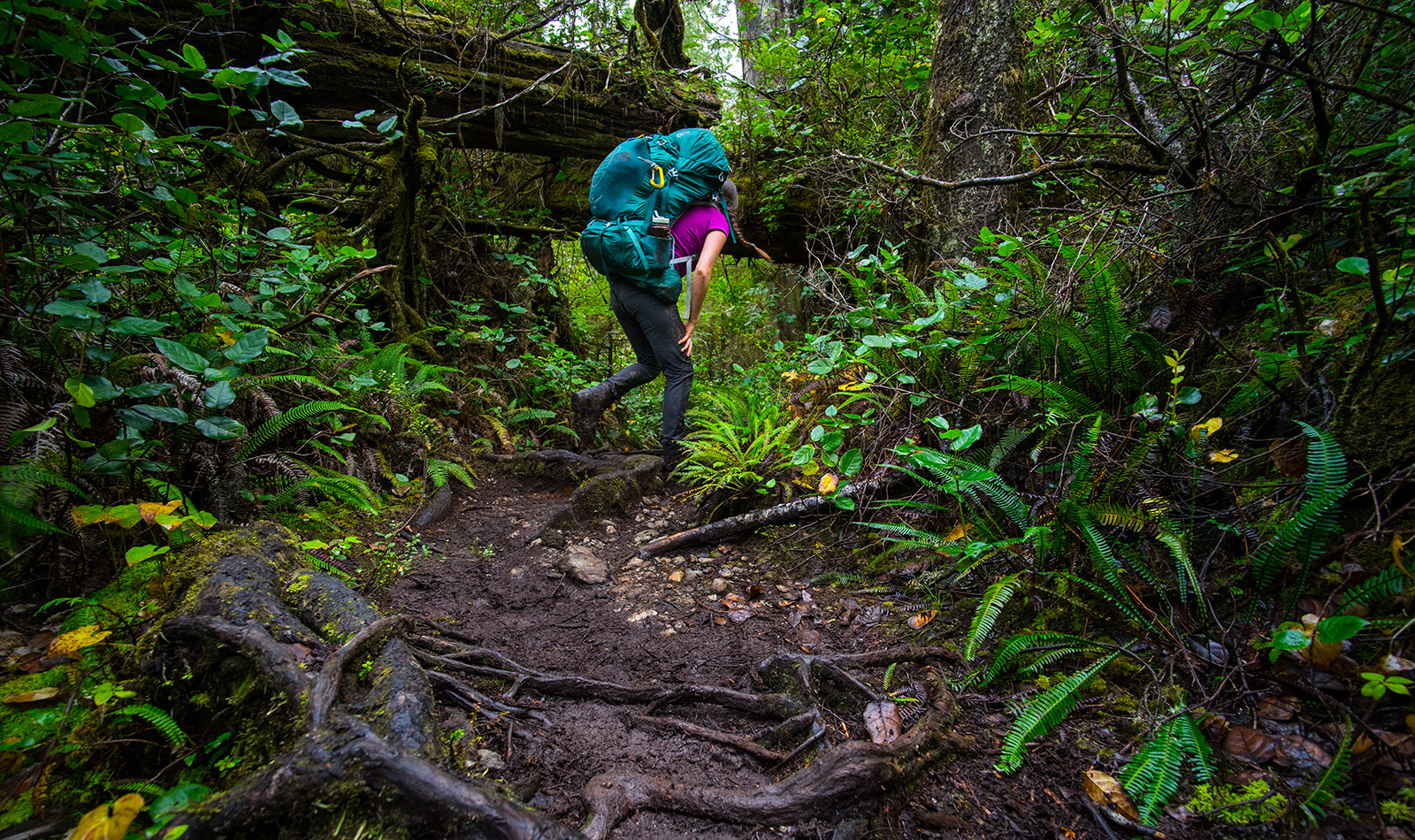 Belonging to the Wilderness

A solo journey on the West Coast Trail
Valerie Luquette

Rain came down heavily as I made my way towards the harbour, down Port Alberni’s empty streets, and dawn’s first light struggled to break through a thick layer of fog. When I boarded the Frances Barkley, ready to sail down the serpentine Alberni Inlet, it was with several other keen hikers, all easily recognisable by their backpacks, gaiters, and hiking poles. In the course of the four-and-a-half hours it takes to reach Bamfield, the freighter drops mail, groceries, and supplies to the different communities along the coast. Although I was anxious to reach Bamfield, the journey through Vancouver Island’s Barkley Sound offered a romantic coastal landscape I will not soon forget. Even though the rain had finally ceased, the moisture still trapped in the air wreathed the coast in mist. Eagles soared over the forest canopy, bears patrolled the rocky shore, and sea lions feasted just a few meters from where I stood. Time slowed and there was nothing else but that moment.

We reached Bamfield early in the afternoon, and were welcomed by a woman offering a shuttle service to the trailhead. I hopped in the van and, as I waited for the other passengers, I noticed a group of mud-caked hikers sitting against the brick wall of the general store. No doubt they had just completed the trail I was about to embark on. They chatted eagerly, probably exchanging tales of their adventure while contentedly waiting for the next boat back to Port Alberni. Watching them amplified my excitement. Once all the other hikers took their seats in the creaking van, backpacks stocked with last-minute essentials, snacks, and mickeys of whiskey, we followed the gravel road in direction of the West Coast Trail.

On reaching the trailhead, I bolted from the van and rushed up wooden steps towards the small A-frame mountain hut where our mandatory orientation session took place: the challenges of the trail, its history, recent bear and cougar sighting, as well as the tsunami evacuation procedures we discussed. Orientation complete, the park ranger handed me my park permit and my tide chart. I was finally ready.

This epic trail has a reputation as one the most gruesome in North America. I looked forward to the challenge. The 75km route nestles between steep, rainforested cliffs and the Pacific Ocean. This setting marries spectacular beauty, stunningly remote wilderness, and extremely unpredictable weather. Originally built as a rescue trail for survivors of ships wrecked on the treacherous Vancouver Island coast, the WCT runs along the temperamental stretch of waters known as the ‘Graveyard of the Pacific’. Part of the Pacific Rim National Park Reserve, a component of Canada’s National Park system, the trail also falls within the traditional territory of the Huu-ay-aht, Ditidaht, and Pacheedaht. These First Nations communities have inhabited and protected this area for generations and, with that in mind, simply being here filled me with immense respect for the land, its people, and its past. 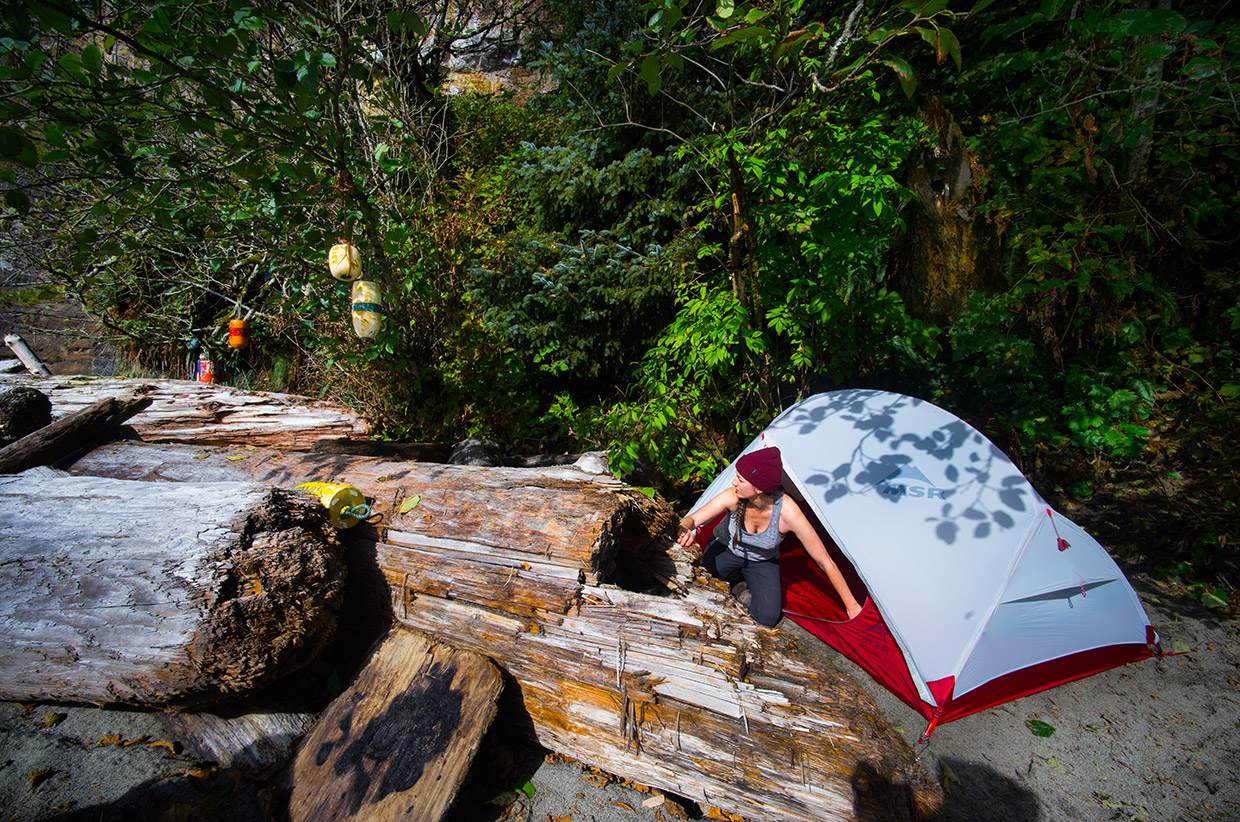 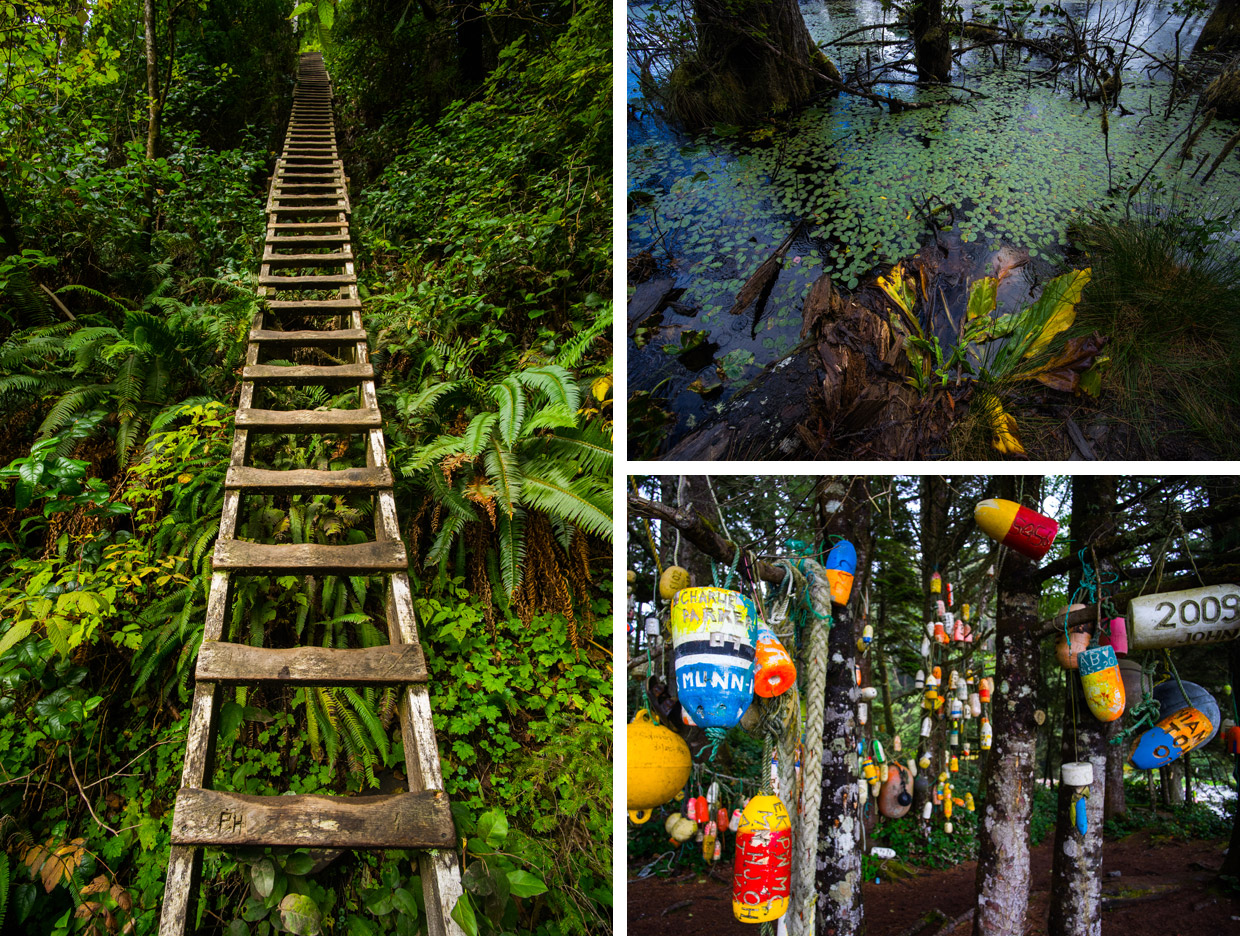 As the work progressed, I often found myself at a crossroads, offered two very different trails, both equally beautiful and challenging. A real-life version of the Choose Your Own Adventure book series. Were I to go left, I would travel inland through an ancient forest of towering cedars, the forest floor swept with moss and giant ferns. I would have to navigate a trail of ankle-deep mud, climb seemingly endless wooden ladders, and clamber over broken boardwalks that have now become obstacles in their own right. On the other hand, were I to turn right, I would travel with the ocean for a companion, savouring its briny smell and a warm sea breeze on my skin, as waves roared below and seagulls cried above. Inviting as this latter route may seem, I would be at the mercy of tidal shifts and might find myself trapped if not careful. Each step would feel heavier and heavier as my boots sank into the sandy beaches and I would have to travel across many surge channels and navigate slick, kelp-covered rock.

The trail became so treacherous that I travelled barely a kilometre each hour. Every step I took had to be calculated and required my full attention. Eventually, allowing myself be carried away by the rhythm of the hike, my mind entered a meditative state.

After a night spent at Walbran Creek, I crawled out of my tent to be instantly overwhelmed by the grandeur of the coast. I boiled water for my morning coffee and made some oatmeal. Perched on a piece of driftwood, breakfast in hand, I closed my eyes and filled my lungs with the crisp ocean air. I reflected on the trail behind me and the 53km I had already travelled. At every point of the compass, I had been met with wild and unpredictable, yet spectacular beauty. From the pristine shores of Pachena Bay to the ‘Hole in the Wall’, a natural sandstone arch carved by the ocean, passing by the majestic Tsusiat Falls cascading over a high cliff to create a curtain of water over stone, to the creek where I found myself that morning, the trail had taken me through exhilarating terrain marked also by physical suffering. Yet, compelled by what treasures lay ahead, my feet grew restless. I broke camp. Even though it hadn’t rained the previous night, there was so much moisture in the air that even waterproof materials were saturated. I packed meticulously, pulled on my boots, and ventured out into the rainforest.

The trail became so treacherous that I travelled barely a kilometre each hour. Every step I took had to be calculated and required my full attention. Eventually, allowing myself be carried away by the rhythm of the hike, my mind entered a meditative state. The weight of my backpack seemed lighter on my shoulders, I barely noticed the first real beads of sweat gathering on my forehead, and somehow I no longer felt the huffing and puffing of exertion. I no longer registered distances or ascents and descents: all seemed to melt into one. I felt nothing but inner peace.

Only when the sound of another hiker struggling to lift his heavy backpack into a hand-pulled cable car resonated through the rainforest was I called back to reality. I stopped to help the young man, holding the edge of the old metal car as he carefully stepped in. But when I let go, the force with which the car was propelled over the river pushed me back to the edge of the platform. The weight of my backpack hauled me backwards and my foot slipped off the slick, wet platform. I tumbled down the wooden ladder.

As I was slung and beaten painfully against the side of the cliff, I frantically sought any kind of handhold that might stop my fall. My vision collapsed into darkness each time my body slammed against the wet ground and, when I bounced back into the air, I caught a flash of the rainforest surrounding me. When I finally reached the bottom, the base of Cullite Cove, I lay on the ground unable to move, stunned, crushed beneath the weight of my backpack. I unbuckled the sternum strap and hip belt to free myself and slowly sat up. Apart from a series of ugly scrapes and bruises on my arms and legs, nothing was broken. I’d been lucky. As I got unsteadily to my feet, the voice of the young man came from the other side of the creek. I assured him I was okay and started to climb the ladder up to the cable car platform. He waited and helped pulley me across and, once he’d gone, I walked to the riverbed to clean my wounds and rest. As I did, a storm brewed on the horizon. A veil of thick, dark cloud closed in on me and the air became heavy with moisture. An unsettling quietness cocooned me. I grabbed my backpack and hurried on to the next campsite. 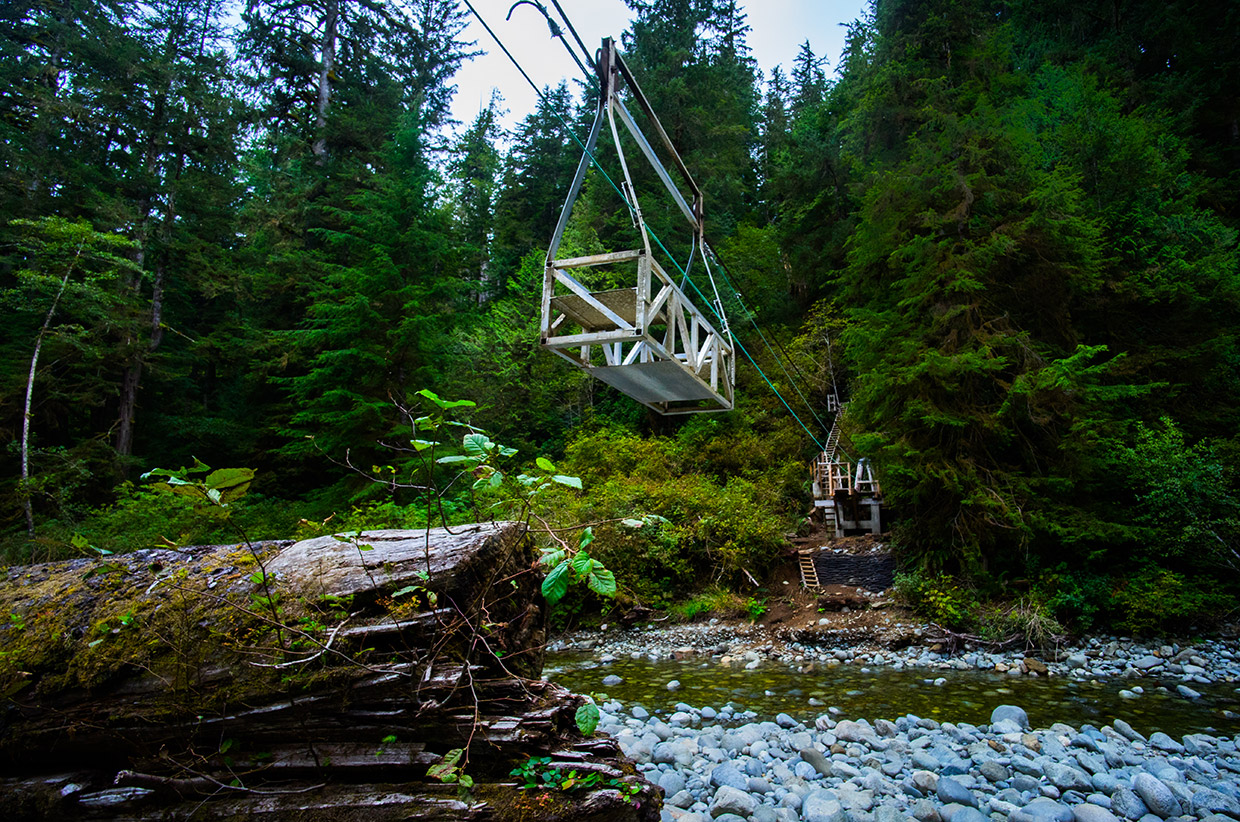 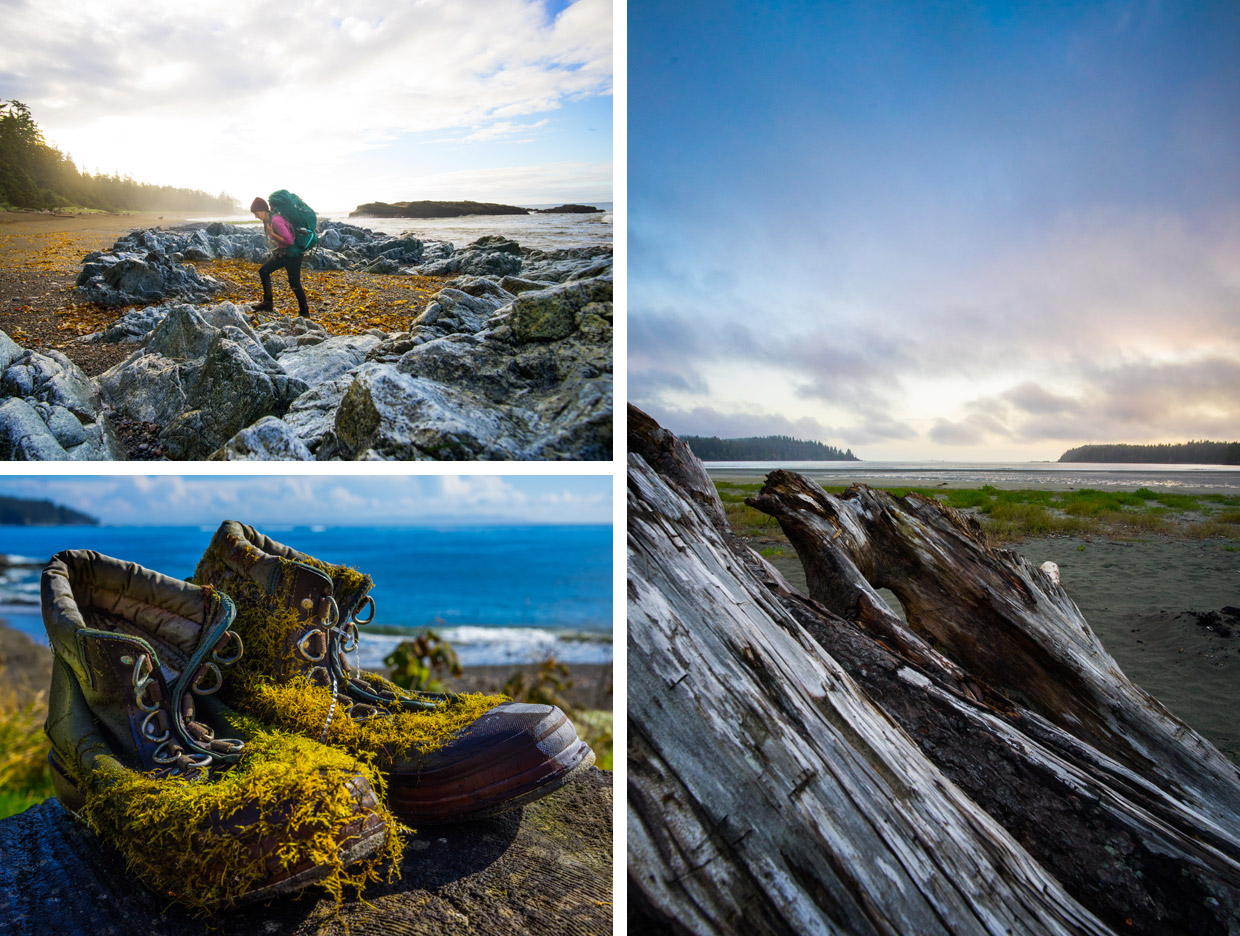 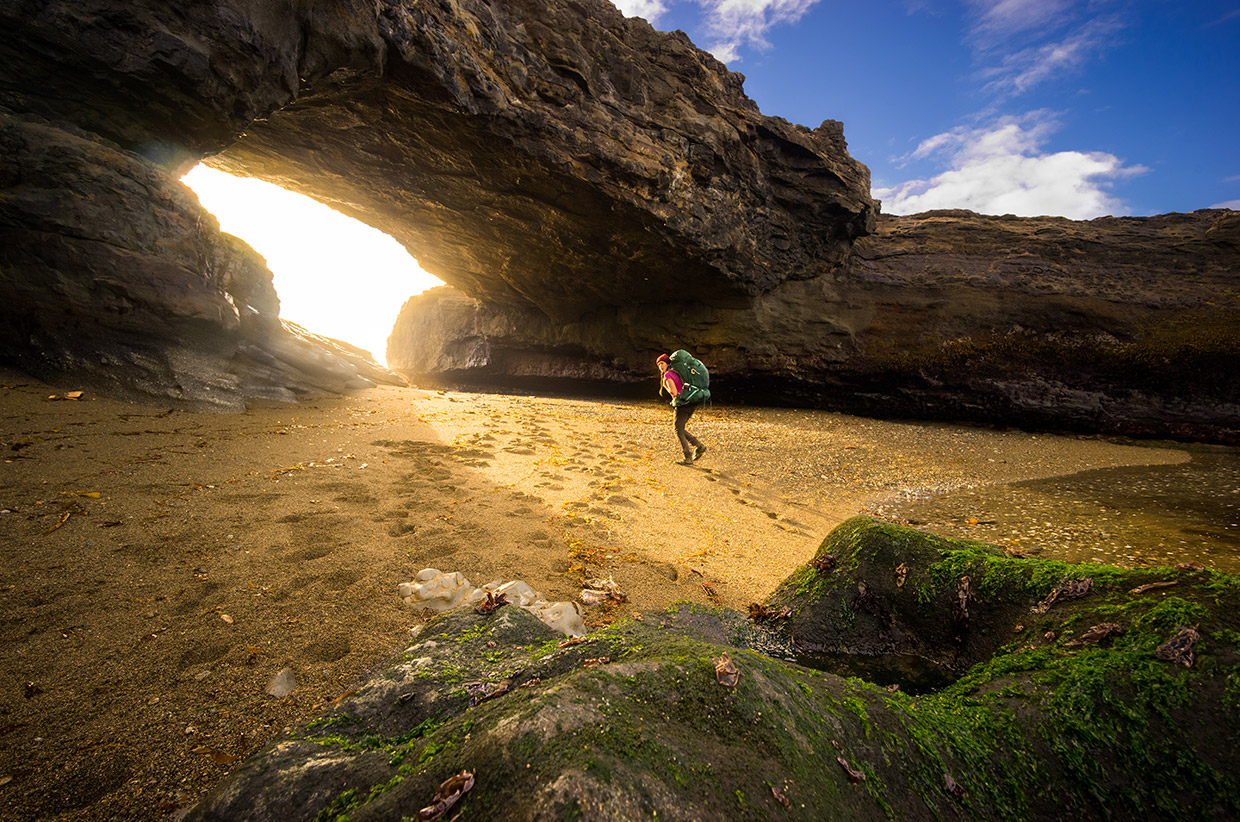 Even as I walked, my left arm swelled to various shades of purple. More and more I had difficulty bending my elbow. Camper Bay was only four kilometres away and I knew I could rest there, so I told myself to keep going. But I could not help but think that, from that campsite, I was still two days to the trailhead and if I had broken my arm, the only way out was to call for an emergency evacuation by boat or helicopter. With a storm approaching it could take them days to reach me. I battled through mud and clambered over a network of slick ladders, and finally reached the campsite. A fellow hiker, a medical student, examined my arm. He assured me that I had a strong grip, a good sign, but recommended I get some x-rays to rule out a potential fracture once I get off the trail.

After a good night’s sleep, I felt stronger and decided to resume. I wrapped my arm in a bandage and resolved that, even with my injury, I had the strength to complete the trail. I knew I could still push myself, and I would have been uncomfortable calling for an evacuation. The pain from my arm, coupled with aching muscles and blisters covering my every toe, was exacerbated by unstinting tiredness, but this could not compare to the pain of giving up then, so close to the end.

And so, for two more days, nursing my arm, I hiked the most difficult section of the trail. Violent winds battered me, surging tides flooded the coast and made treacherously slippery a seemingly endless boulder field; I jumped over surge channels and rappelled down steep slopes. In the end, perhaps it was because of this I proved myself stronger than I ever thought possible and came to realise that I had never felt a sense of belonging more than I do in the wilderness.

Valerie Luquette is a Vancouver based art coordinator and photographer. In her quest to capture the natural world, she spends all her free time in remote places photographing the adventures and personal projects she undertakes. Focusing on landscape and outdoor photography, her passion comes from her desire to showcase the beauty of the wild and to inspire others to get outside as well.

Between Heaven And Hell Remembering Home 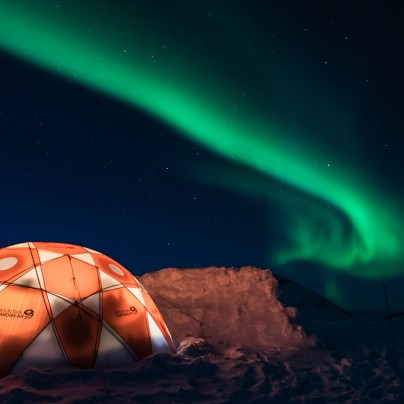 The Force Of The Wilderness Daniel Wildey 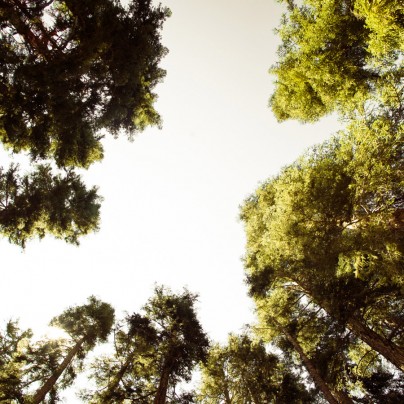