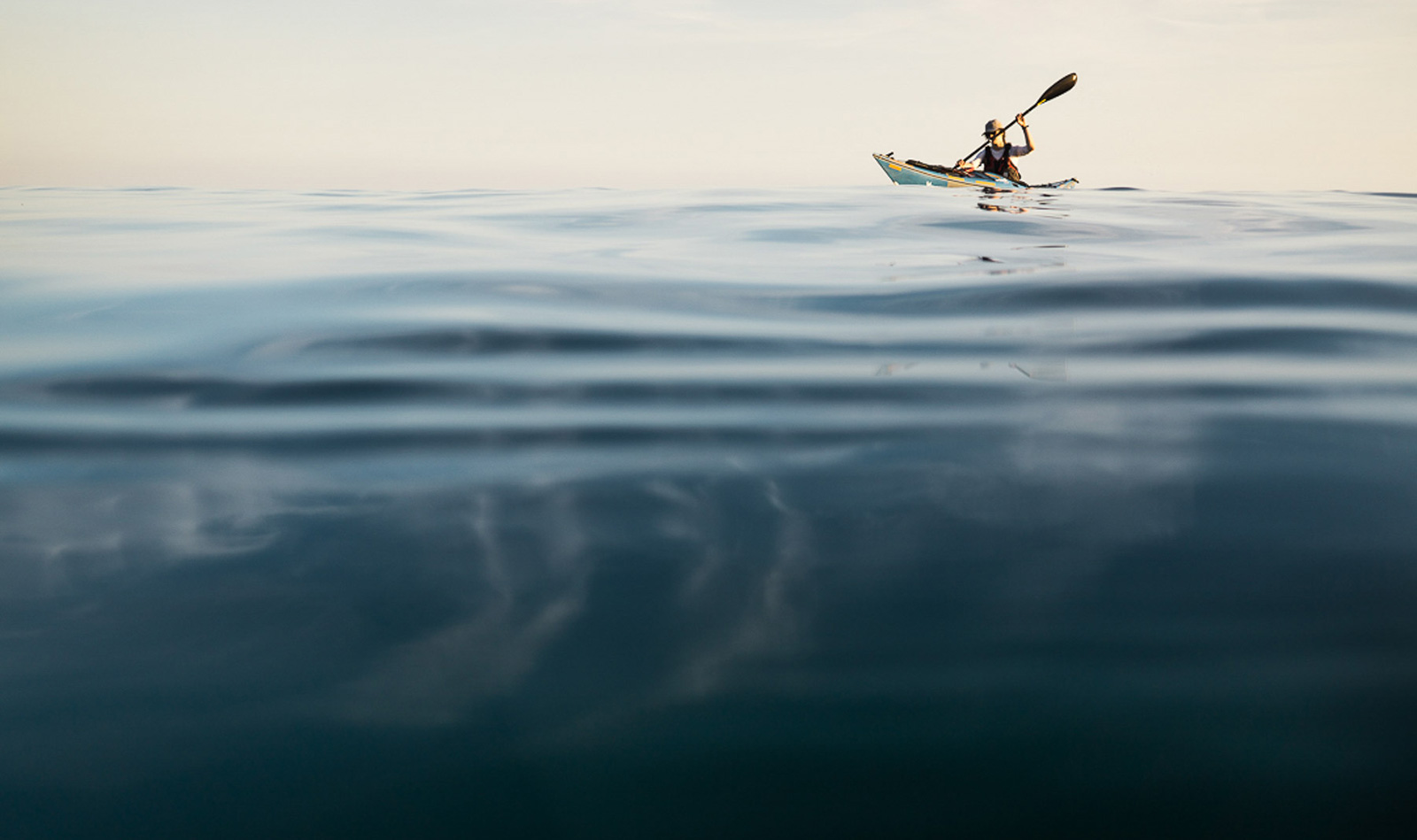 As I sit and dream about the next big adventure, I often forget our humble little island. It gets lost; swallowed up by bigger dreams of wild coastlines, burgeoning forests, and mountains so huge that I daren’t even climb them. I feel depressed, perhaps even a little claustrophobic, as I remember the impossibility of finding any true wilderness here in the UK.

But, as I drag my kayak up onto a deserted beach along the Cornish coast, twilight settling on the water behind me, I heave a sigh of relief. All I can see are ocean and sky. I am reminded, in some profound way, of home; that amid the chaos of modern life, it is still possible to paddle quietly along empty coastline, to tune in to the rhythms of the sea, and to catch a glimpse of the natural wonders that our island home is begging us to explore, enjoy, and most importantly, to protect.

Since I met Oli at university, he’s trekked India and Sumatra and cycled to the Arctic Circle. Meanwhile I’m still adjusting to home after a year spent living nomadically on the west coast of British Columbia. Our friendship was founded on our mutual fondness for watery exploits, especially kayaking. At 22 and 23 years old, we’re both trying to find our adult feet, and to figure out what happens next.

On August Bank Holiday weekend, Oli and I devised a plan to paddle from Saltash – near Plymouth – to Looe, in south-east Cornwall, along some of the country’s most precious coastline.

The weekend forecast was perfect: the water would be calm, the sun would beat down for two days, and there was no inkling of rain or wind. We packed our waterproof gear just in case, but we knew we wouldn’t need it; so, more importantly, we packed our jeans and a bottle of red wine for an evening of relaxing by the fireside on a hopefully deserted beach. We set out late on Saturday afternoon from a pontoon beneath the Tamar Bridge.

The first few miles of the paddle were a slog. We’d caught the outgoing tide, but had to follow the built-up banks of the Tamar Estuary near Plymouth until we reached the Rame Head Heritage Coast. We paddled beneath the submarines at Plymouth’s naval base as they loomed large, like whales’ backs glinting in the sun. Soon we eyed Drake’s Island, which marks the gateway to the Atlantic and to the south-east Cornish coast. It’s believed that the English privateer Sir Francis Drake landed on the island in the 16th century after circumnavigating the world, to hide some of his enormous haul of pirated treasure there, before sailing on to London, to meet the Queen.

It was here that we pirated our own treasure – a beautiful iridescent mackerel had caught on Oli’s line. We reeled it in, but alas, it was too small to be of much use. We admired it as it beamed flashes of pink, purple and turquoise in the mid-day sun and returned it to the gleaming waters of Plymouth Sound. What useless pirates we’d make, I thought.

As I drag my kayak up onto a deserted beach along the Cornish coast, twilight settling on the water behind me, I heave a sigh of relief. All I can see are ocean and sky. I am reminded, in some profound way, of home. 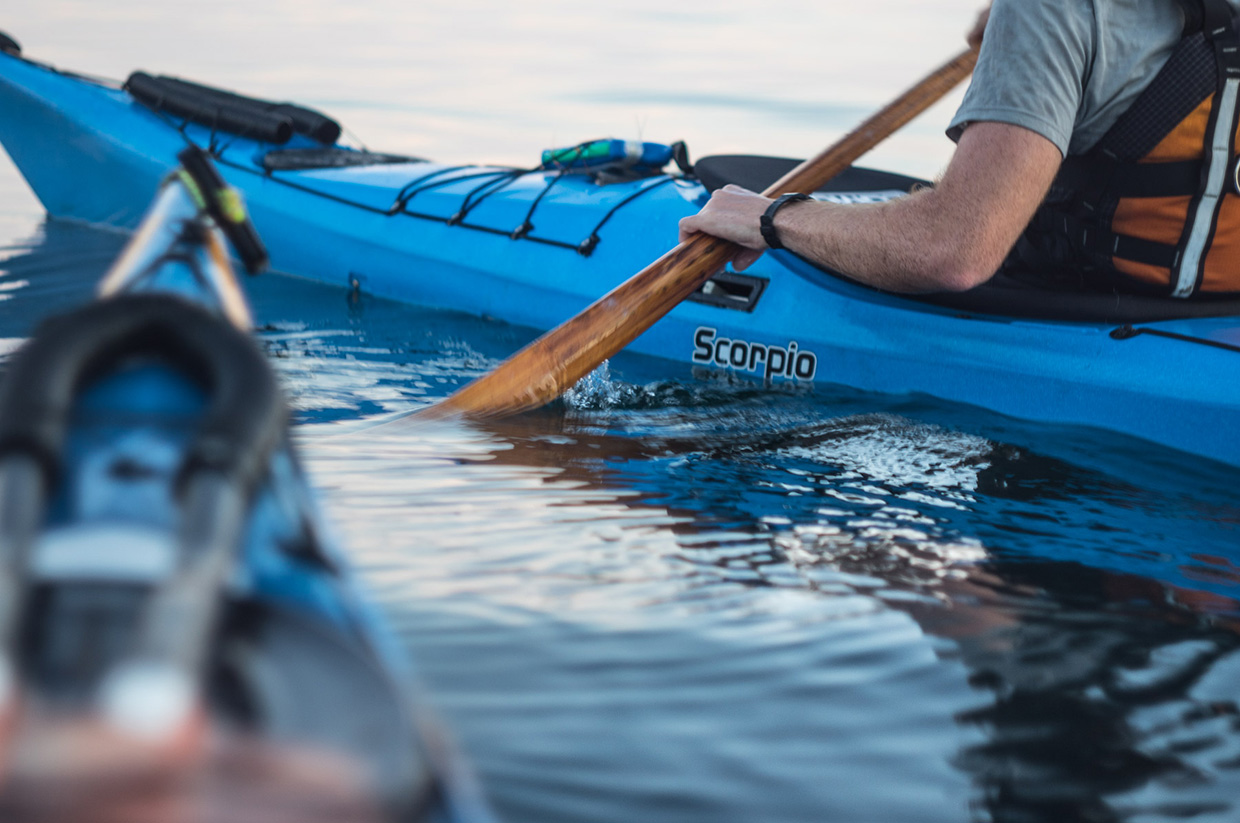 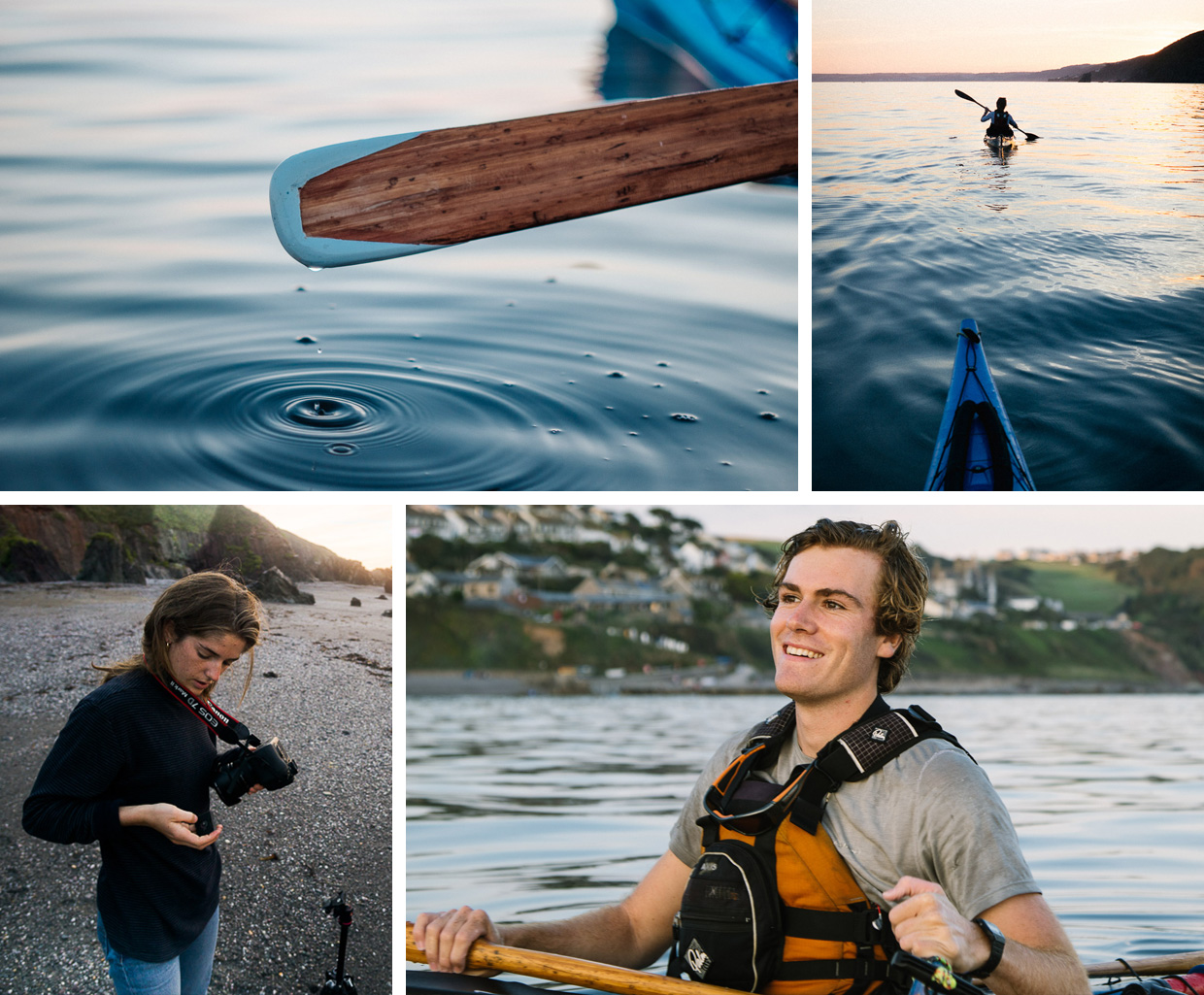 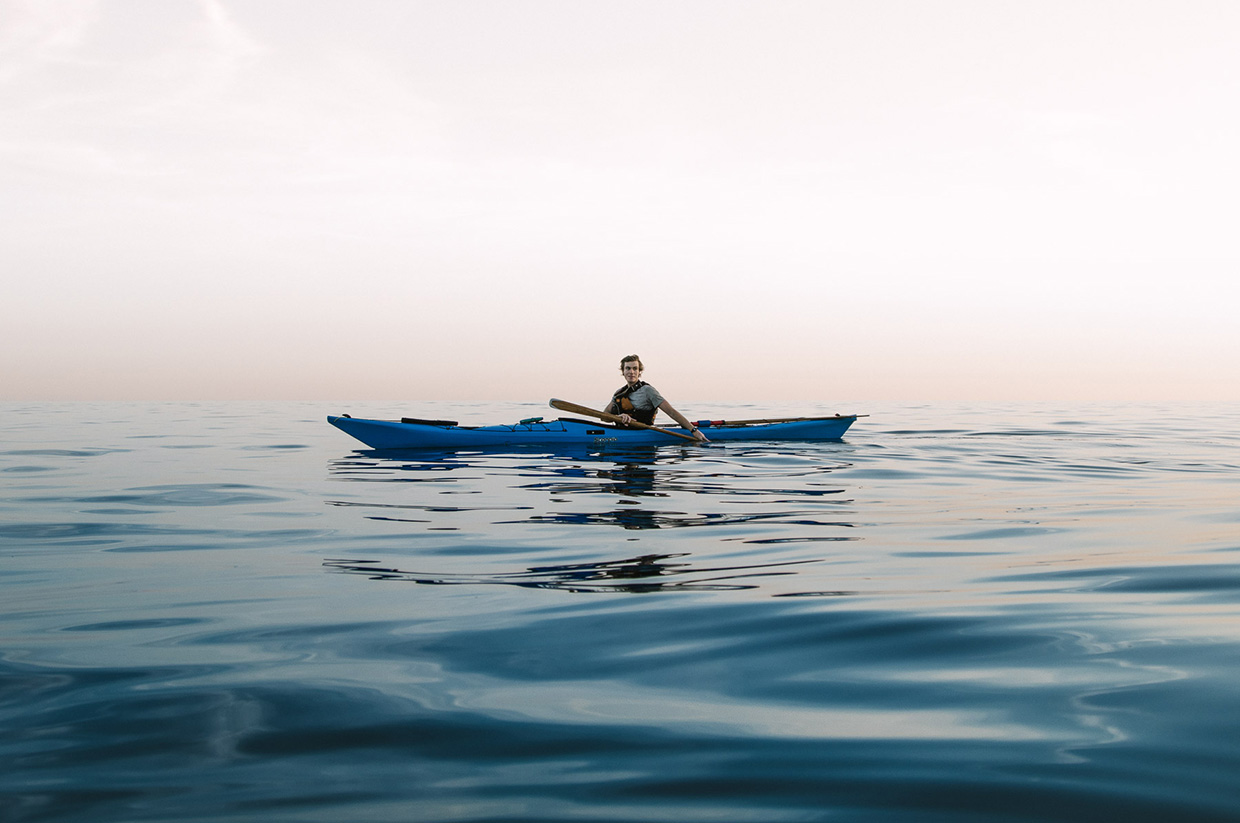 Rock pools and kelp beds revealed themselves beneath the slack water as we continued to paddle in and out of gullies, rock-hopping and surfing on the gentle waves that surged between outcrops. I sat and peered downwards. Spider crabs scuttled sideways and a mob of sea bass flashed as they hunted beneath the surface.

We dipped briefly into Cawsand Bay, before paddling the peninsula. We were in a hurry to reach the gullies and sea caves at the base of Rame Head that, protected from winds and swells, teem with fragile and delicate marine life. As we left the safety of Plymouth Sound and paddled out onto the open ocean, an army of freakish white splodges began to appear on the water’s surface. At every stroke, a compass jellyfish would narrowly miss an unwelcome prod as they basked in the afternoon’s warmth. It was unusual to see so many, Oli told me, and the glassy conditions made them appear even more spectacular as the sunlight illuminated their strange, translucent bodies. We stopped for a chocolate break on a pristine beach that was only accessible by boat, and where two peregrine falcons are known to be regular visitors.

Rock pools and kelp beds revealed themselves beneath the slack water as we continued to paddle in and out of gullies, rock-hopping and surfing on the gentle waves that surged between outcrops. I sat and peered downwards. Oli and I reckoned that we could see at least 6m beneath the kayaks on this miraculously still day. Spider crabs scuttled sideways and a mob of sea bass flashed as they hunted beneath the surface.

By this point the light was beginning to fade. The water was changing from a clear turquoise to milky blue, the sky tinted pink along with the ocean. I felt an overwhelming sense of happiness and clarity as I dipped my paddles into the water, one stroke after another, against the wide-open horizon. We lingered there, in that pinky space; I wanted to remain a part of that ocean as it underwent its colourful change from night to day.

We lost track of time and when we hauled our kayaks onto the shore it was gone 9.00pm. With scant light left, Oli and I dashed around the beach with our cameras, bare feet in the sand, trying to capture the last of the evening’s glow. Eventually, we gave up and just watched, before bringing our kayaks above the high-tide mark, draping our sodden kit across the rocks, and setting up our tents on our utterly deserted private beach.

As we gathered driftwood to make a fire, I was reminded of similar evenings spent kayaking and camping in the many deserted corners of British Columbia. With the beach to ourselves, we enjoyed our dinner alongside a well-earned swig of red wine, after we had inexpertly opened the corked bottle using a knife and a tin whistle. We sat by the fire until it burnt out, at about 11.00pm, enjoying our moment of quiet.

The stars gradually began to appear, culminating in a stunning display of the Milky Way against a crescent moon. Far away from the light pollution of crowded cities, Cornwall has some of the darkest skies in the UK.

It was about 12.30pm when I heard Oli scrambling around in his tent, and then heard his footsteps rush past the door of mine. Half asleep, I wasn’t sure what he was mumbling about, but I pulled on my jeans and fumbled in the darkness for my head torch before emerging and chasing after him down the beach. 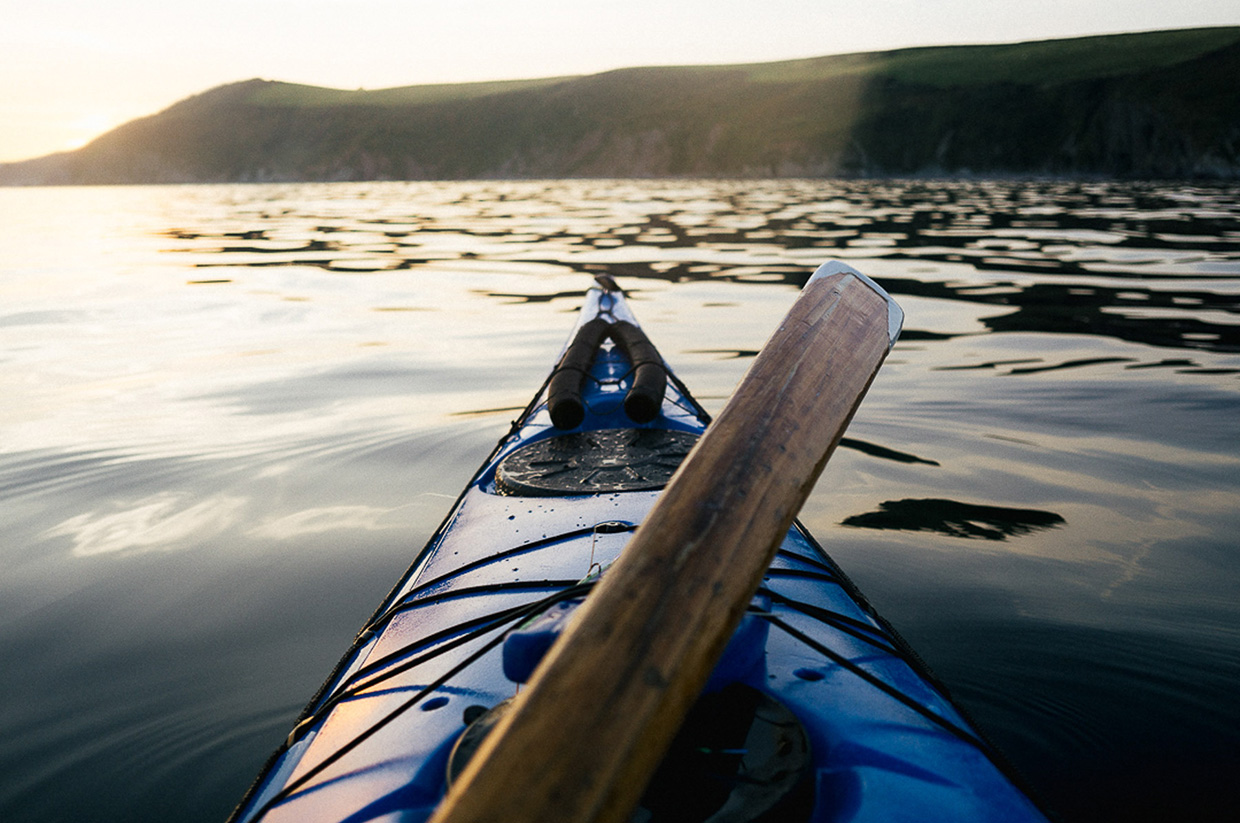 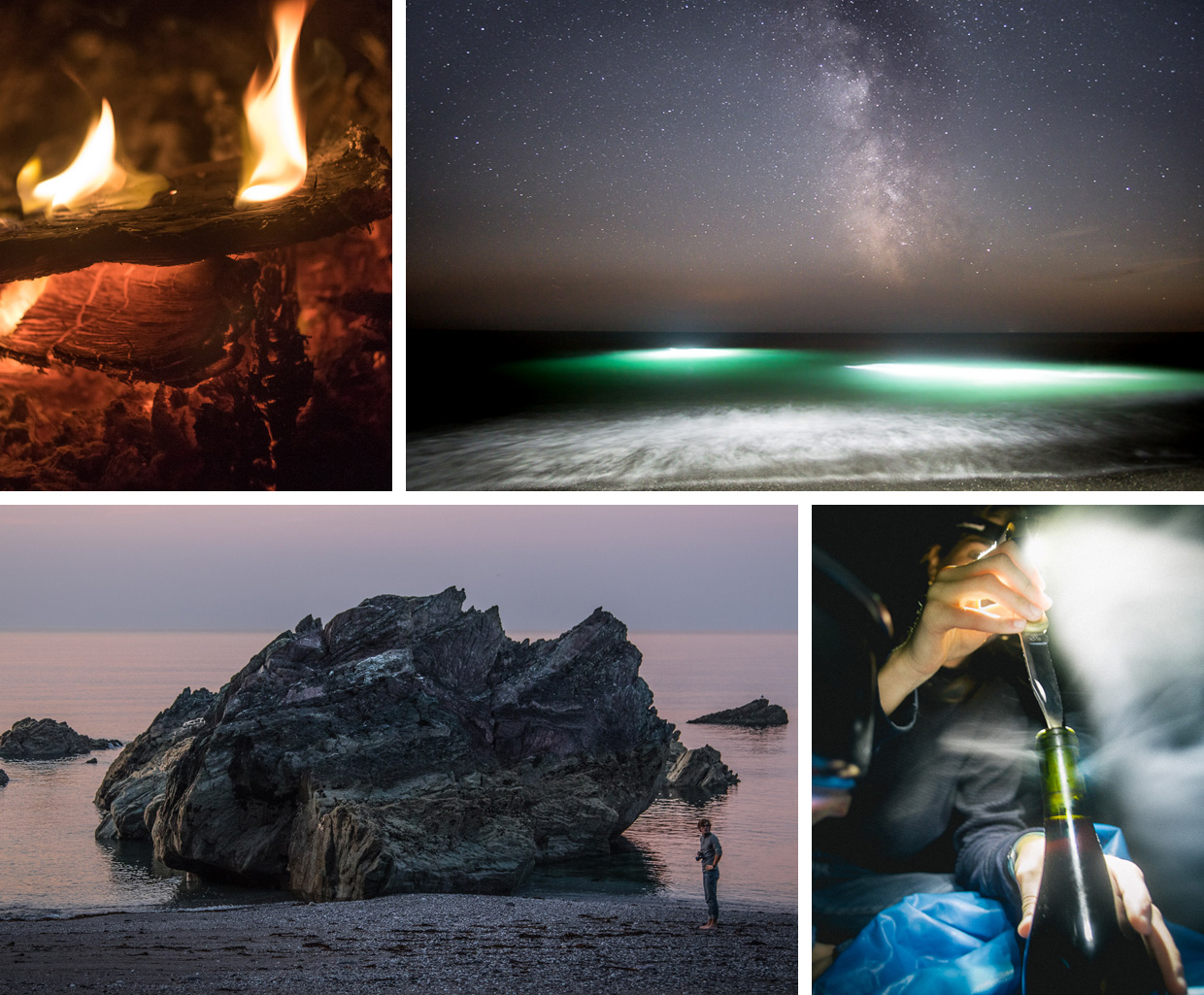 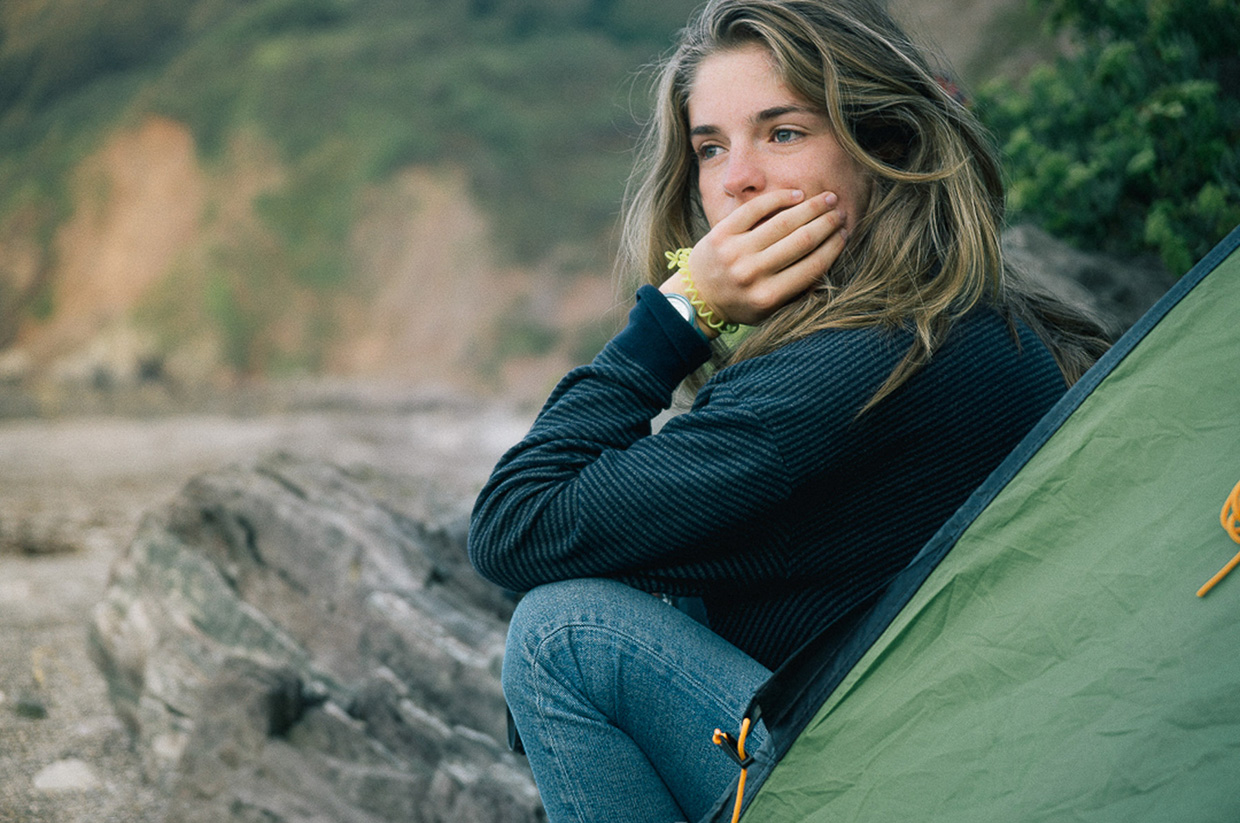 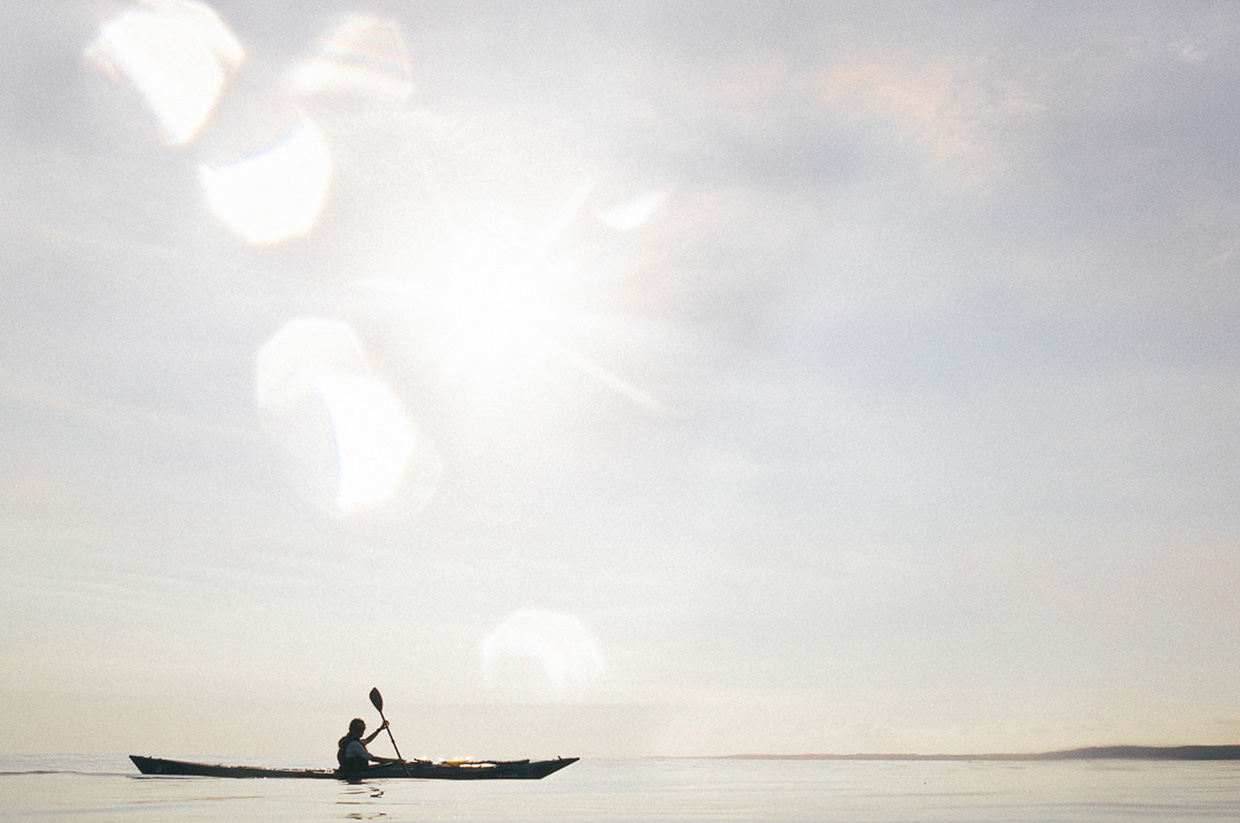 From the black ocean shone two impossibly bright lights and on the beach lay an abandoned sit-on-top kayak. They’re freedivers, Oli explained. Freediving at night reveals an entirely different crew of motley creatures. We watched as the two bright lights travelled around the rocks in the cove and after a while two men emerged, clad in thick wetsuits, from the mirror-like water. They’d known, like we had, that the conditions would be immaculately still – perfect for freediving. They reeled off a list of the species they’d seen: sloppy sea cucumbers, starfish, bug-eyed cuttlefish, sea urchins, suckered octopus and cat sharks dressed in camouflage.

The next morning, we were escorted from our beach and out of Britain Cove by a pretty flock of red-legged oystercatchers – who would fly ahead and settle on a rock further up the coast until we caught them up, when they would fly away again in panic. It wasn’t long before we’d reached Looe Island, a marine nature reserve home to a herd of goats and a grey seal colony. There are said to be fewer grey seals in the world than African elephants, and about half them (160,000) live in the UK – many in Cornwall.

As we rounded the island the seals came into view. Some were basking on the rocks, whilst others bobbed their heads curiously above the surface of the water. It was now or never. I dug out the dive mask that I’d strategically placed in the nearest hatch to the cockpit, yanked off my spray deck, unzipped my life jacket and – with little consideration for the freezing water –jumped into the ocean in nothing but my leggings and T-shirt.

I struggled to hold my breath as my body adjusted to the shock of the cold. Determined, I floated motionless, and waited as, slowly, the seals began to approach. On land, they had always seemed so cumbersome, as they lugged their bulging bodies across the rocks. Beneath the water, however, as they raced, ducked and dived between the kelp beds, they were lithe and powerful – like underwater acrobats.

Chuffed and freezing, I clambered back into my kayak and shivered the whole way back to Looe, where I arrived on the beach in my soaking-wet T-shirt, sporting a wild smile from ear to ear. Perhaps my island home isn’t so small after all…

Helen Taylor, 23, is a writer and photographer who has recently returned from a year spent working and travelling in British Columbia, Canada. She travelled the remote western coast of BC, exploring the Queen Charlotte and Gulf Islands, whilst living out of an 89′ Volvo Wagon.
Website: helenviolet.weebly.com
Instagram: @helenviolet.taylor
Sidetracked Story: Haida Gwaii

Oli Broadhead is a 22-year-old aspiring documentary photographer, filmmaker, and writer, who has recently returned from an expedition to Sumatra, where he conducted the first biodiversity survey of an unexplored forest, attempted to make an ascent of the 3080m Mount Kurik, and crossed the island on foot.
Website: olibroadhead.com
Facebook: Oli Broadhead Photography
Instagram: @oli_broadhead
Sidetracked Story: Big Cats and Bus Shelters

Belonging to the Wilderness The Push 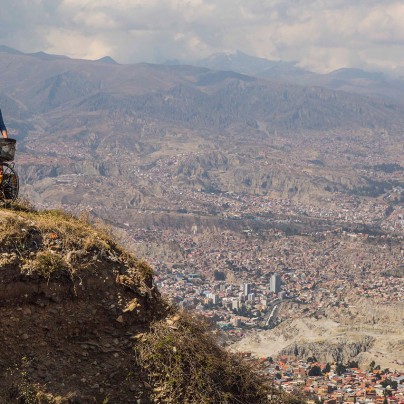 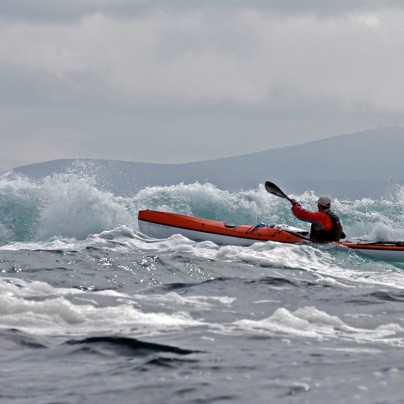 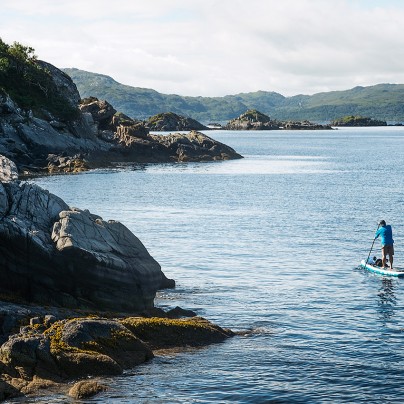 In The Wake Of The Celts Mark Kalch // Martin Hartley