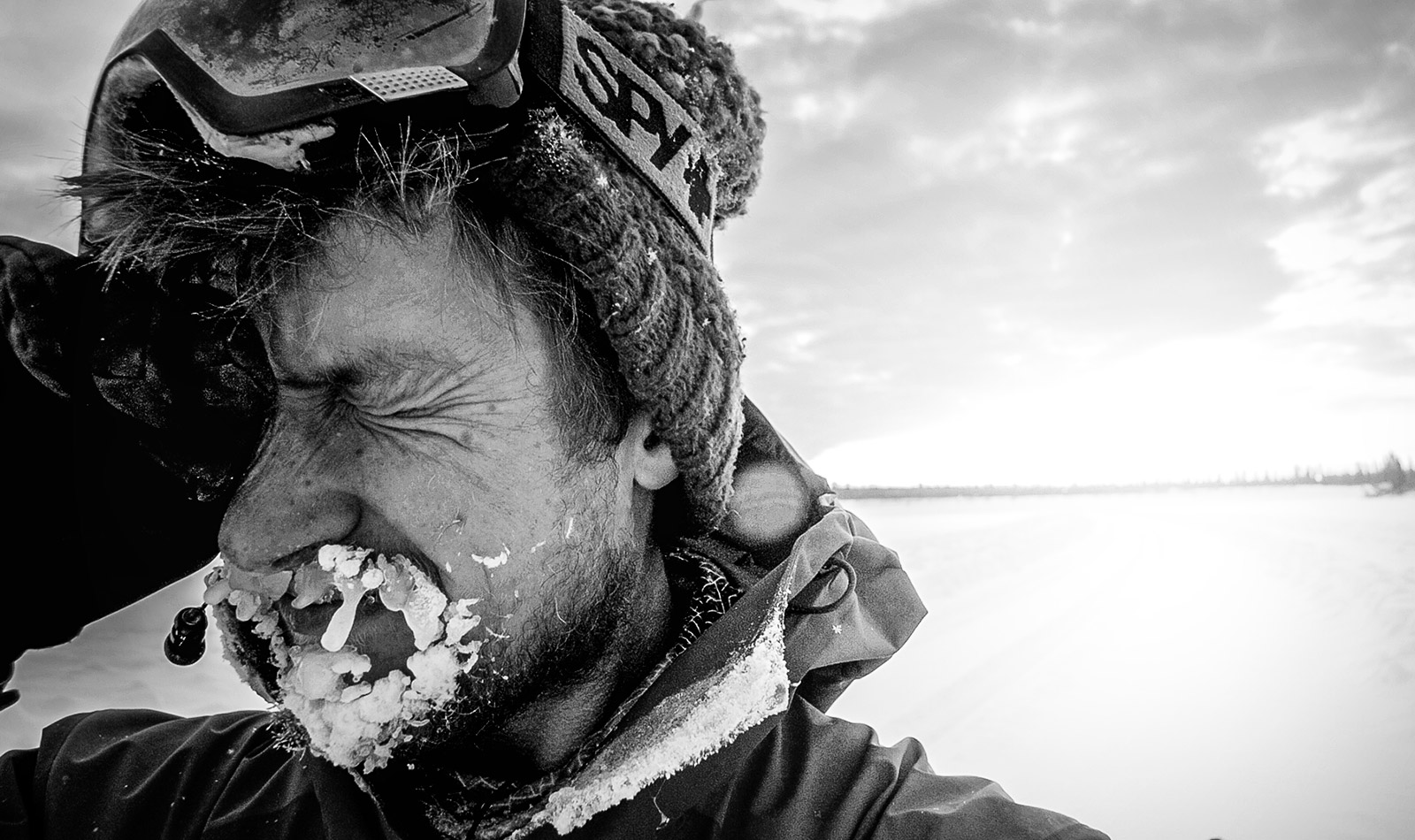 A Winter Journey into the Canadian Arctic
Ben Page

I twisted around, trying to free my arms from inside my jacket and bring them up to my head. The two hats I’d been wearing had fallen off and the cold night air now gnawed painfully at my ears. Fumbling inside my sleeping bag, awkwardly moving countless batteries, bottles, and fur boots from underneath me, I eventually found the hats and pulled them down over my ears. Through the numbness of gloved hands, I tried to locate the toggle at the hem of my bag. Several frustrated attempts later, I seized it and pulled the sleeping bag in tighter around me. It was 1.00am and I hadn’t slept a wink.

The sun had set hours earlier and the northern lights had begun their nightly dance across the sky. A glittering green hue shimmered over the pale snow that lay beyond my open tent door. I switched on my head torch and its beam flashed against walls that were stiffened and brittle, encased in a hard veneer of ice. The thermometer showed -30˚C, or maybe just a touch below. Despite my tiredness, this was an incredible place to be: high in Canada’s Northwest Territory, up above the Arctic Circle, camping on a frozen river. I’d spent the past year travelling from the southern tip of South America to this point, now just a few days’ ride away from the frozen shores of the Arctic Sea marking the halfway point to my bike ride around the world. I was following nature’s frozen highways, taking to the ribbons of white that spill out across the land this far north; the rivers that are lifeless until spring when the ice gives way to the thaw.

But lying in that tent, alone, was a scary place to be. The walls began to quiver and shake and, adjusting my hats once more to clear them of my ears, I caught the unmistakable sound of a storm coming in. The gathering violence of the wind crescendoed in a deep, rumbling, basso growl as my tent sprung to life, buckling under the growing pressure. I peered out of the door to see no more green light dancing, no more stars shining overhead. Clouds had already gathered and I struggled to make out the banks of the river from where I lay. I quickly zipped the door closed, crawled into my bag and lay there, eyes wide open, listening to what was coming.

The roar was overwhelming – chillingly thunderous and seemingly intent on tearing apart my diminutive shelter. Ice and snow shook free from the walls, showering me, pulsating and shivering likes motes in a snow globe. I lay utterly still, gripping the insides of my bag. I closed my eyes, trying not to imagine just how far away from help I was. I knew then that this storm, which had been forecast to hit some days from now, would be a game-changer. The thin cut of clear navigable ice I’d been cycling on down the river would be swamped. I knew I was stuck.

The roar was overwhelming – chillingly thunderous and seemingly intent on tearing apart my diminutive shelter. Ice and snow shook free from the walls, showering me, pulsating and shivering likes motes in a snow globe. 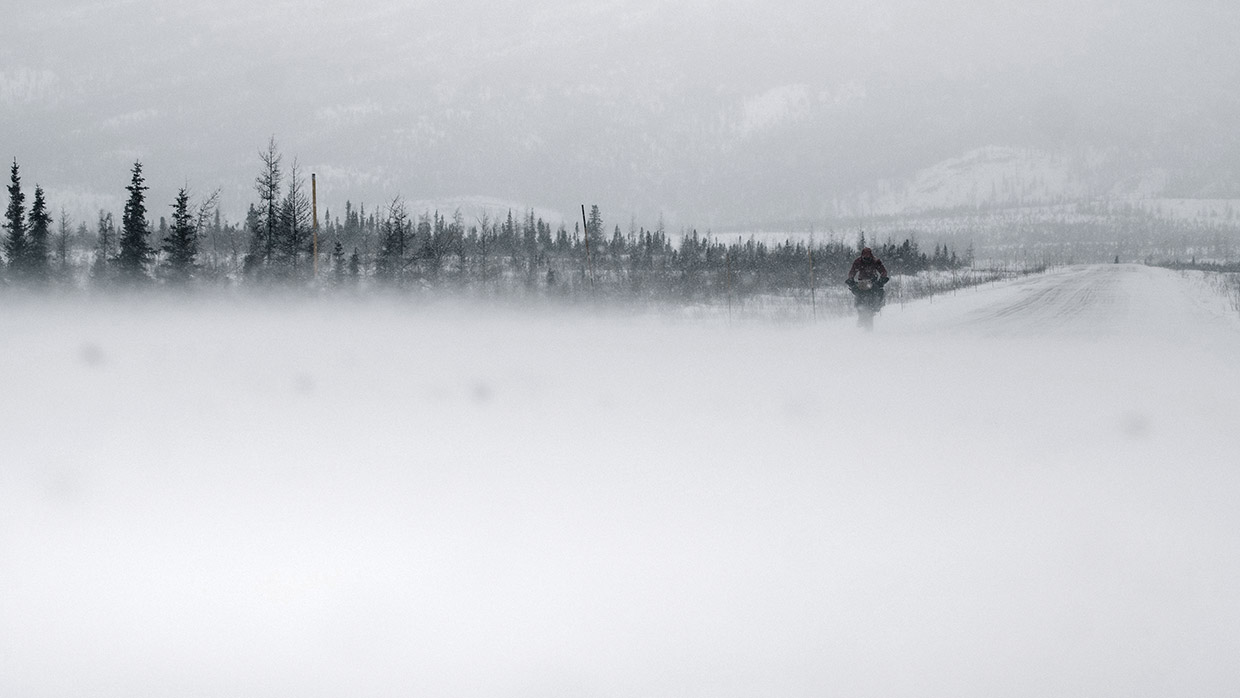 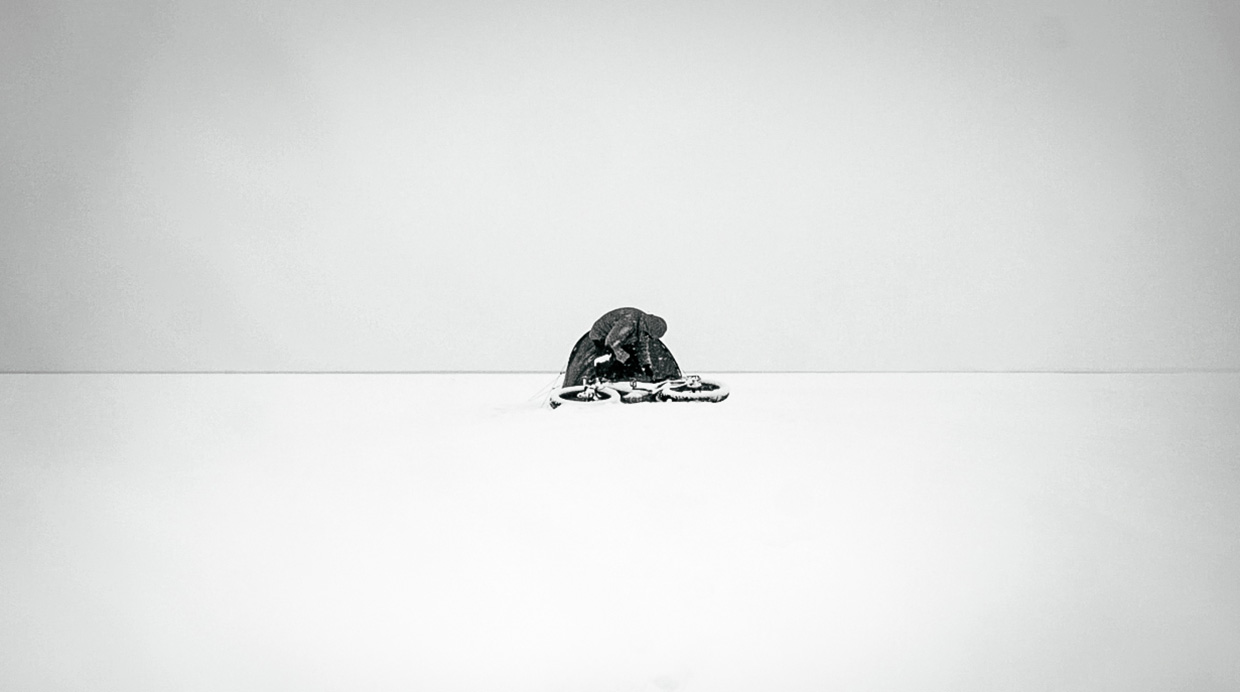 I knew how far out of my depth I was – a couple of lapses in concentration, exposing my fingers, face, or feet for too long, would be disastrous out here. I picked up the bike and stood it in the snow. It was time to start pushing.

At some point in the early hours of the morning the storm passed, leaving in its savage wake a tent battered and bruised, and hanging limply from buckled poles. I turned over, shifting into a more comfortable position, waiting for sleep to wash over me once more, but in the eerie silence that hung over the landscape I caught a faint, far-off sound. Somewhere in the trees that towered over the river came the unmistakable sound of a wolf’s howl. Shit.

I’d passed through the small village of Fort McPherson the day before and there I’d been approached by a man. He’d heard about my ride and had come to impart some advice: be careful of those damn wolves, he told me. It’s been a long winter and they’ll be getting hungry. He then offered me his gun, but I couldn’t tell if he was being serious or not, so politely refused. He slapped me hard on the back and went on his way, but the image of wolves prowling the snow and ice ahead lingered. Now, the howls clung to the night air, first intensifying and growing louder, then joined by yet more cries. I fixed shut my eyes, willing the noise away, berating my mind for leaping to all sorts of unpalatable conclusions. I was gripped by a cold, dark fear, but eventually, mercifully, the baying faded.

When morning finally arrived, and my eyes flashed open, I knew what lay ahead of me. I’d ridden roughly 100km from that last village, and the next one was about 60km further on. My ride down the river was supposed to be for only two days. I’d packed food for three, just to be sure. Crawling out of my tent I squeezed my feet painfully into frozen boots, old, second-hand army things, and took a few steps. My feet broke through the barely frozen crust and plunged into deep, crystalline snow beneath. Where bare ice had been the previous day, the only possible passage I had down the river had been swallowed up in the night, engulfed in thick, pillow drift snow; the wilderness had asserted its authority once more. I began melting snow to make breakfast and took stock of my situation. I had two days’ of food, 60km remaining distance to cover, and a 50kg bike. The snow was deep and soft; I knew I wasn’t going to be breaking any speed records. I grabbed a handful of oats and threw them in my pot – it didn’t look like much, but it was time to start rationing. I guessed I’d be pushing for four days, so unless I happened to stumble upon a miraculously well-stocked winter cabin, I had to make two days’ worth of food stretch.

It was tough to get going that morning, to get the tent packed away onto the bike, to leave my warm sleeping bag knowing what lay ahead. I won’t lie: I was unnerved by my situation, perhaps even scared. I knew how far out of my depth I was – a couple of lapses in concentration, exposing my fingers, face, or feet for too long, would be disastrous out here. I picked up the bike and stood it in the snow. It was time to start pushing. 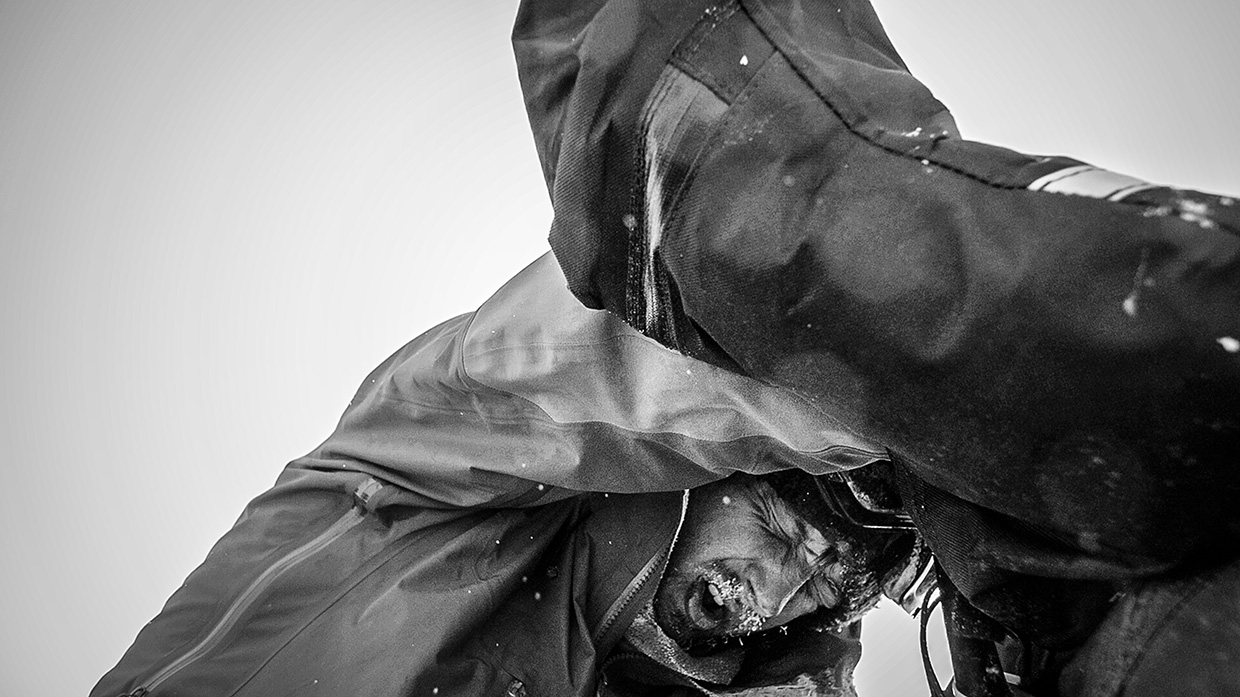 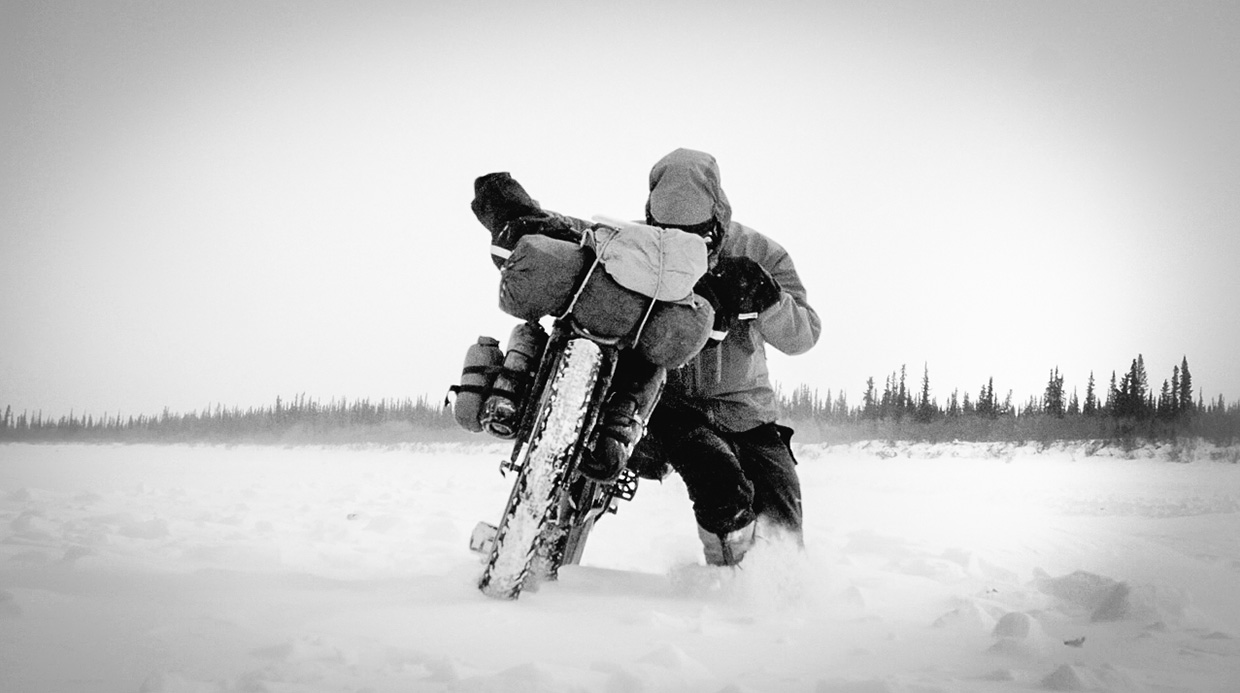 That first day went by surprisingly easily. I made slow progress through the snow, but it was progress nonetheless. Somehow I managed to flick the ‘positive’ switch in my brain; I was overwhelmed neither by the cold, nor the hunger, not even by the relentless fear of wolves. But when that first day was done, when I was again tucked up in my sleeping bag, that switch turned off. Adrenaline seeped away. Those fears bloomed fresh and savage again and a sense of hopelessness washed over me. I’d come to the Arctic in winter to challenge myself, and to see a place few get the opportunity to experience. I had come in search of romantic solitude, to live within the pages of a Jack London novel; to travel through a land so culturally prominent in our ideas of adventure and heroism. Stuck on this desolate river, far away from friends and family, I realised that rather than experiencing sweet solitude, I was desperately lonely. All that had compelled me to come here, the emptiness, the beauty, the challenge, now towered over me and threatened to crush me into submission. Words jumped from Jack London’s pen that I instantly knew to be true: ‘The unending vastness crushed him into the remotest recesses of his own mind, pressing out all the false ardours and undue self values until he perceived himself finite.’

Stuck on this desolate river, far away from friends and family, I realised that rather than experiencing sweet solitude, I was desperately lonely. All that had compelled me to come here, the emptiness, the beauty, the challenge, now towered over me and threatened to crush me into submission.

For three days I pushed my bike, by inches closer and closer, painfully slowly against a backdrop so vast I felt like an inadvertent drop of paint on a pure white canvas. Late on that third day, tired, lost, and seized by loneliness, I made out two bobbing lights closing in on me. I lifted the goggles from my face to make sure I wasn’t imagining it. Yet there they were, two lights approaching, and with them two men on snowmobiles. I waved and pushed my bike forward. They pulled alongside, switched off their engines, and beamed at me. I was confused. I couldn’t figure out what they were doing there. ‘We’re the local Search and Rescue team,’ one said. ‘We came to find you’.

I was stunned. I later discovered that news of my journey had reached the town of Aklavik and, worried I’d not been seen since before the storm, the local police had dispatched a local Search and Rescue team to find me. They radioed back to the village and their words almost made me laugh: ‘We’ve found the guy here on Husky River, we’ll see if he wants a ride.’ They told me that the village was only a couple of kilometres away and that I’d pretty much made it. I didn’t think twice about jumping on the back of their snowmobiles. I wanted nothing more than to get off this river that had trapped me for three days as quickly as possible. As I stowed my bike and the rest of my kit, I caught sight of the gear they themselves had brought and I realised then the seriousness of my situation. They carried a gun for the wolves, and a body sled, just in case.

This full film is also downloadable via www.benpagefilms.com.

Ben is a multi-award winning filmmaker, adventurer and photographer based in Yorkshire. He has spent the past few years travelling to some of the world’s remotest corners in search of wild and diverse adventures and experiences, usually on two wheels.