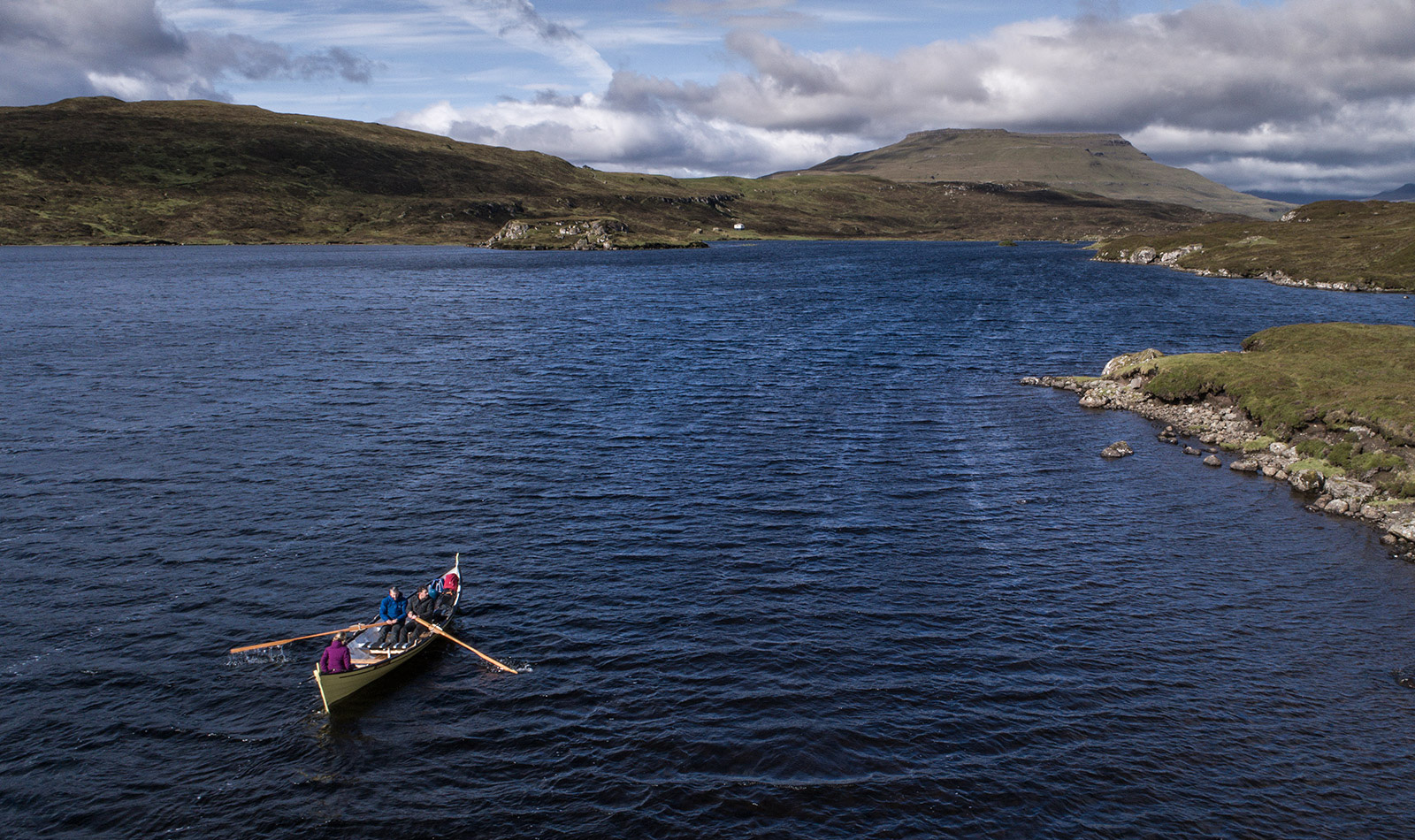 Rain surged and disappeared; cloud smothered the mountains above us, occasionally revealing a puffin-beak sharpness. Paths sprawled across the hillside, and we stayed high, aiming for the remains of a small house or sheepfold.

There was nothing in front of them but a horizon, and everything behind them. In small wooden boats, the early explorers pushed off from a shore on the edge of Ireland or Scotland or Scandinavia, propelled to jump off the edge of the earth, into the unknown. What were they looking for? Were they exiled, or in search of a land of their own, earning their freedom or spreading the word? After days at sea, they would have glimpsed something jutting out of the sea, or perhaps they saw a seabird. The horizon was no longer empty, their view filled with cliffs and sea stacks, and mountains that exploded up from the volcanic ocean floor. The land is rocky, barren and almost entirely without trees. Those hardy people brought sheep with them, still part of the Faroese staple diet today (Føroyar is directly translated as ‘the islands of sheep’). But below their hulls, the sea writhed with life: cod, haddock, flounder, shark, squid, whale, and mackerel. Seabirds thronged the cliffs. Puffin, gannet and fulmar. Perhaps everything they needed was in front of them, on this mountainous archipelago in the tempestuous North Atlantic.

Tunnels and ferries, tunnels and causeways. We were driving, five of us, to the island of Kalsoy, one of 18 in this archipelago. We left our little wooden cabin, bundled into the van, and went to seek an escape. Nothing is too far away in the Faroes. An hour or two and you can reach the ends of most of the sprawling fingers of the islands. From Klaksvík, we crossed the strait on a car ferry and landed on the long, thin Kalsoy, monikered ‘the Flute’. Population: 150. Here the roads are narrow, and the single-lane tunnels are kilometres long and even narrower. We had a destination in mind: Kallur Lighthouse on the far northern tip. We’d arrived the night before in darkness, and only today was the real drama of the Faroe Islands coming into focus.

Rain surged and disappeared; cloud smothered the mountains above us, occasionally revealing a puffin-beak sharpness. Paths sprawled across the hillside, and we stayed high, aiming for the remains of a small house or sheepfold. After a break, we continued to climb over the ridges, like ribs from the central mountain we were traversing. As we rose, we began to see the islands beyond.

Føroyar, or the Faroe Islands in English, exploded out of the Atlantic during the Paleogene period some 60 million years ago. The islands often form long triangular prisms, unlike anything I’ve seen before. Scratched across in horizontal lines are black rocky crags that divide the green fells. Each line represents a volcanic event that tore through the Atlantic seabed, the magnitude of which we could not imagine. It is the ash from the volcanic eruptions, softer than the basalt, which falls away leaving these marks. 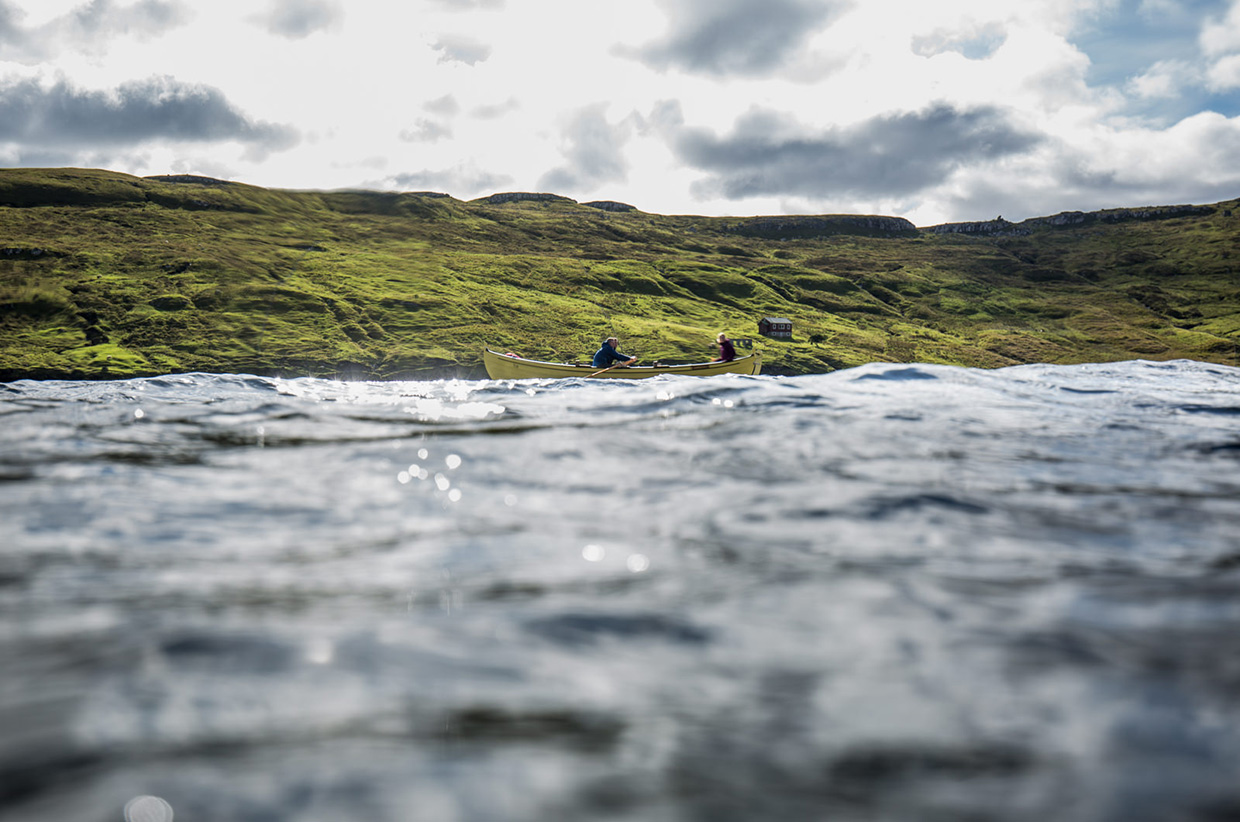 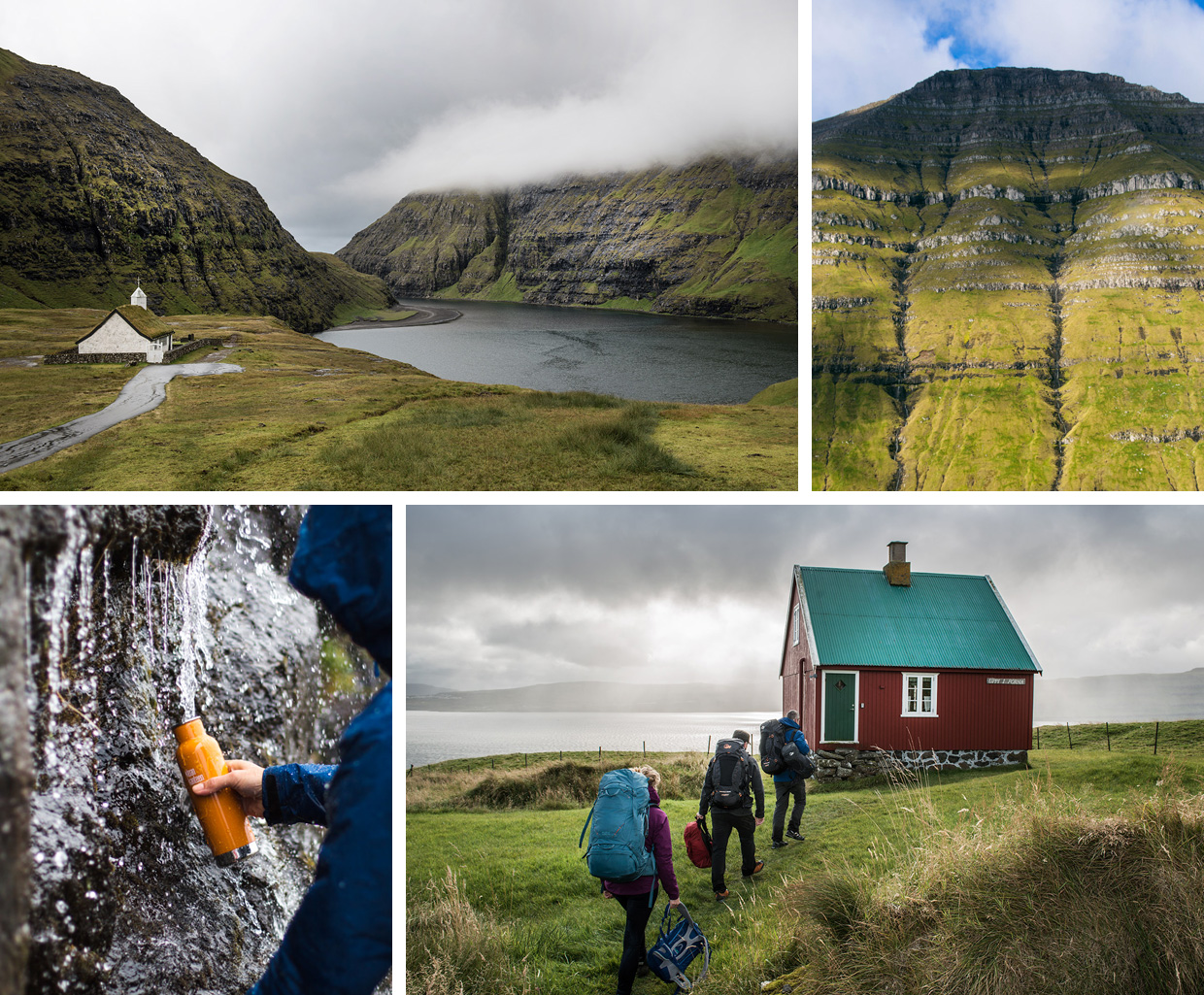 As we climbed higher, rising along a seemingly benign grass slope, we could see the much-photographed lighthouse a few hundred metres to the west. We gained the highpoint and were alarmed at the drop that gave way to the Atlantic that thrashes the shores and cliffs below us. Gannets, gulls and fulmar wheeled in the void. West across the Atlantic at 62˚ was Greenland; beyond that, Baffin Island and the North-West Passage.

We walked along the ridge, narrow as a park bench, to the lighthouse where we sheltered from the wind and ate our sandwiches. By this point, the sun was breaking through the swirling clouds more regularly, revealing the cliff behind us. Beyond, south and north, the peaks of the Faroe Islands appeared, darkening to the horizon. The land did not gradually rise out of the ocean. Instead, it split the water like a shark’s fin emerging through the surface. When those first settlers arrived in a small wooden boat, they would have thought it an unforgiving land. A sea-level relief map of the ‘Isles de Ferro’, drawn by the French navigator Yves-Joseph de Kerguelen-Trémarec, shows the towering columns of basalt forming mountain after mountain.

The Faroe Islands lie halfway between Norway and Iceland. Shetland and Orkney are the nearest inhabited neighbours at around 300km away, but this remote archipelago was uninhabited as late as the 5th-7th century. The history of the first inhabitants is as murky as its waters, but it is accepted that Irish Monks first made landfall, perhaps along with people from Scotland and Scandinavia. Føroyar became of strategic importance to the Viking territories after the Norsemen began to arrive from around 800 AD. They established a parliament and capital in Tórshavn. Today, the Faroe Islands is an autonomous country within the Kingdom of Denmark. Inspired by the successful independence movement in Iceland, a similar sentiment appears to be spreading among the Faroese. Those in favour of independence cite the possibility of oil, and the industry that supports much of the inhabitants today as it did in the 6th century: fishing. This is a country defined more by the surrounding ocean than the land itself.

The land splits the water like a shark’s fin emerging through the surface. When those first settlers arrived in a small wooden boat, they would have thought it an unforgiving land. 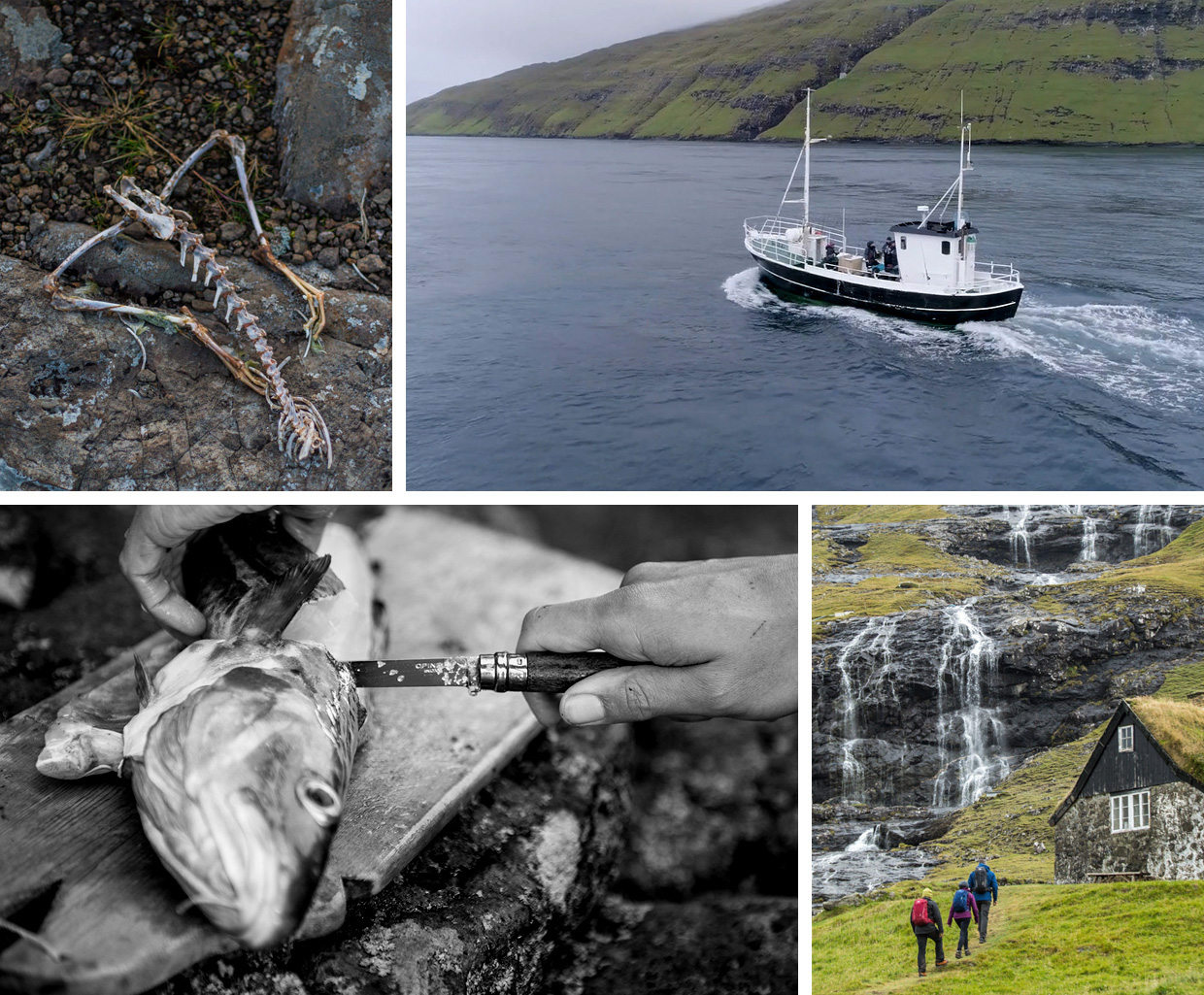 A wave of nausea briefly rises in me as I stare at this beautiful beast I’ve just killed. The green patterning, like contours on a map, glimmers in the sun.

Magni Blástein beheads the cod with a single pull of a serrated blade. The head falls into a plastic bin while he skims the large body into another. Magni is our captain. He’s a quiet, no-nonsense man, practical, matter of fact, but always with a wry smile sneaking into the corner of his mouth. I trust him immediately. He is the captain of a small fishing boat and will take us out into the Atlantic to – hopefully – catch cod for our dinner.

We’re kitted out in hefty fishing gear and feel untouchable against the sheeting rain. Magni is poking his head out of the wheelhouse as we speed out of the harbour. ‘We’ll catch lots of fish today I think,’ he says, smiling. The rain passes east and calm returns to the bay. Magni brings the vessel to a stop, and we load the hooks with prawns.

Before long the first of us feel the pull of something on the rod. It’s a slippery, flat dab, small but big enough to eat. The hook is removed, the dab swiftly killed and the rod loaded again. Another dab, and another. ‘We want cod,’ Magni exclaims, still smiling, and we move farther out to sea. Lifting the bait a little off the bottom, we wait patiently. I know immediately that it is a cod. It takes all my strength to reel it in, and I’m nervous about what is about to appear out of the black water. The angry cod, just under a metre long, flips and writhes. Magni grabs a hook and hauls it in. I jab my fingers under its gills to get a grip and pull out the hook from its mouth. Magni hands me a knife, and I turn it upside down and chop its head off. The body gives a couple of flips and then it’s silenced.

A wave of nausea briefly rises in me as I stare at this beautiful beast I’ve just killed. The green patterning, like contours on a map, glimmers in the sun. Before I’ve time to reflect any more, Magni has put another shrimp on the hook. ‘Nice work, go get more.’ I do – three more, and throw a couple of small ones back.

As we trundle back to the shore, I get a chance to chat to Magni. Between puffs of his cigarillo, he tells me of life on the Faroes. ’70 to 80 per cent of our food comes from the sea or the land,’ he says. ‘We’re having roast fulmar tonight.’ Fulmar hunting season takes place for a week in August when the fat young can be easily grabbed. They stock up their freezers and enjoy the bird at weekends. Puffins and gannets are also eaten, but I get the impression that fulmar is a favourite. 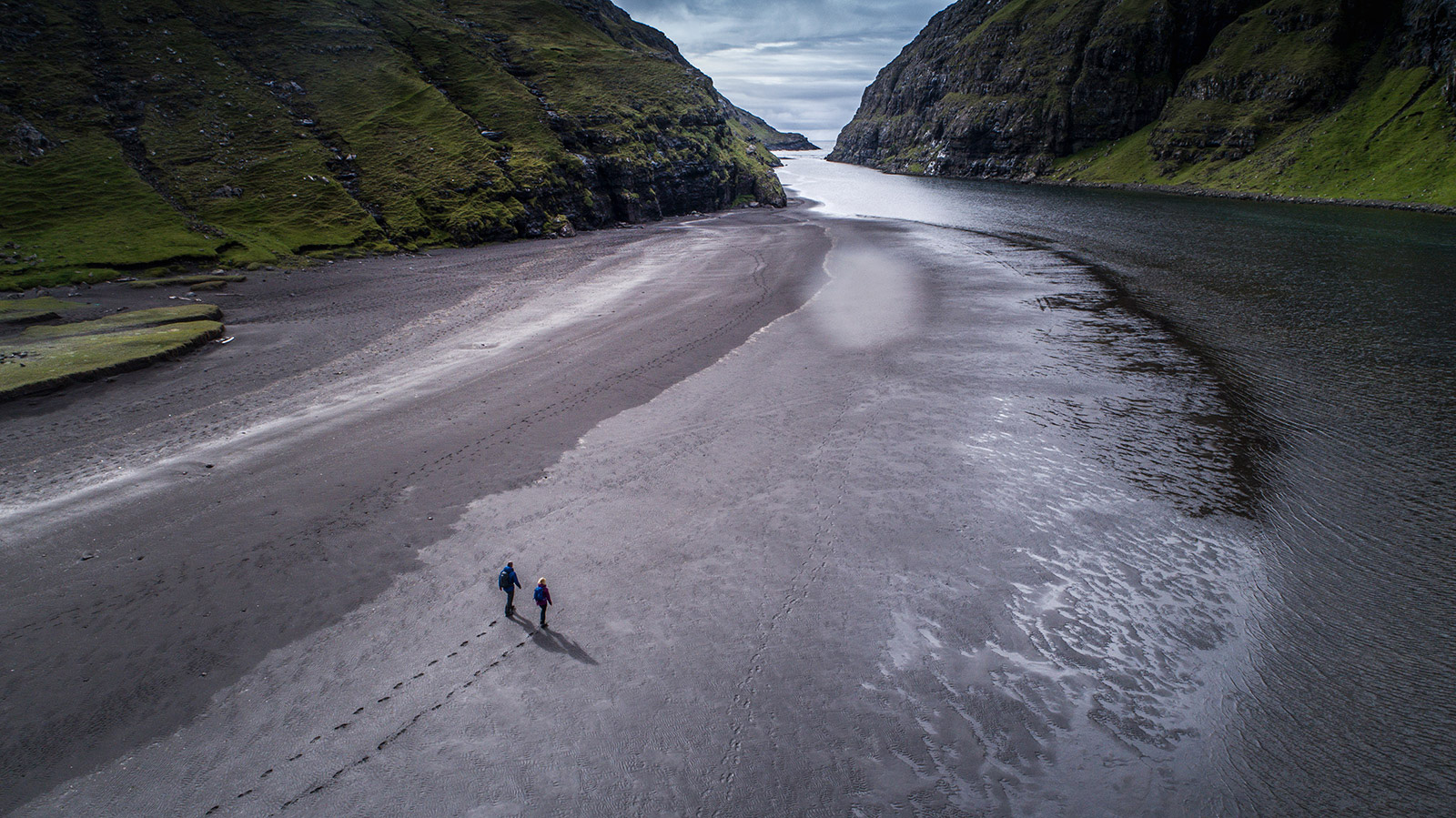 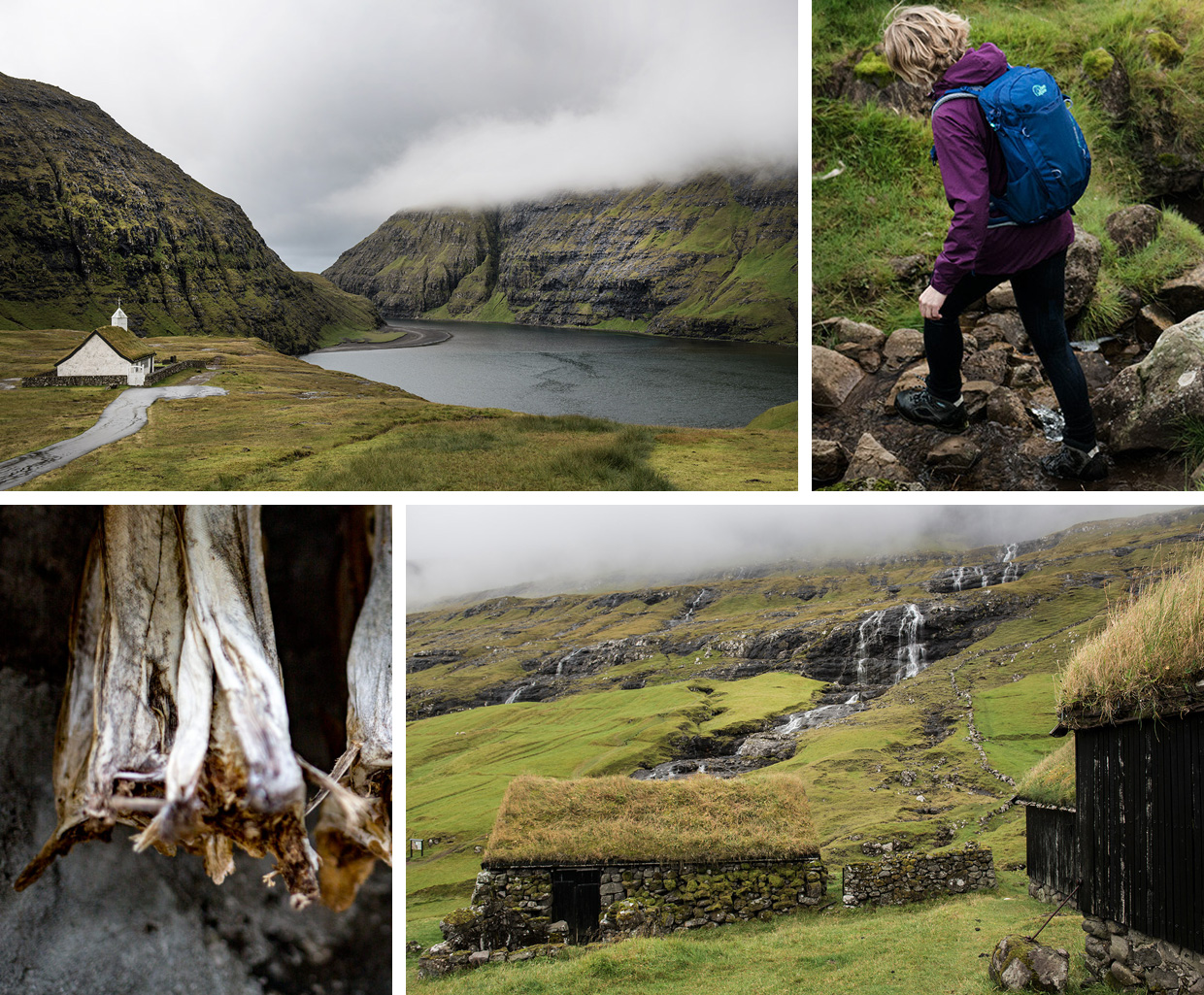 As we’ve seen, the abundance of fish means that forms a large part of the diet. But it is the whale hunt that causes worldwide controversy. According to Magni, if a pod of pilot whales is seen off the coast, the community needs to be alerted. Fishing boats then join together to drive the whales into a narrow bay where they are slaughtered. It is a practice that has been criticised by groups such as the Sea Shepherd Conservation Society for its cruelty and the fact that the Faroese can now live by other means. The high levels of mercury in the whale meat are also of concern.

‘Depending on the size of the catch, everyone in the community gets an equal share of the whale. If there’s more, we start distributing it to neighbouring communities,’ Magni explains. The whale meat also appears in the upmarket restaurants of Tórshavn. I expect him to talk about tradition, but like much I hear on these islands, it is unerringly pragmatic. In our modern world of bleeping checkouts and WhatsApp notifications, the need to reconnect is increasingly prevalent. Heck, that’s why I’m in the Faroe Islands. But when I spoke about this to some Faroese they looked at me like I was a little unhinged. It’s a community, a modern one, connected by tunnels and mobile phones, but it’s also one that lives on its wits and skills. For many, there’s little need to ‘reconnect’, not when 70 per cent of your food has been caught by you or someone you know.

On our drive back to the cabin, we stop at Saskun, a hamlet surrounded on three sides by high fell. Below it is a lagoon and a narrow strait that leads out to the ocean below. The little houses and huts here have thick, grass roofs, a style we’ve seen dotted around the islands. A white church sits near the cliff that drops into the water below. This natural amphitheatre is almost too beautiful to take in. Waterfalls dash down deep ravines into the lagoon, the cliffs fall into the sea, and a perfect white beach appears as the tide goes out. We walk and wonder until we’re cold and return to our warm cabin.

I feel a pang of guilt that we have caught more fish we could eat, so we drop some off at our nearest neighbours. They are grateful for the haul. We lay the cod out on a cutting board and, with considerably less expertise than Magni, fillet it and fry it simply in butter. The five of us huddle around the table in our little wooden cabin, warm from the wind outside, and tuck in to a meal of cod and home fries.

From our cabin on the south-eastern tip of the island of Eysturoy, we can see the lights of Tórshavn as the skies darken. The peaks and the sea begin to fade into blackness to the west. Directly south-east is Shetland. Trawlers are heading out to sea, the wake in the inky black ocean lapping on the shore. It will be another cold night on the Atlantic with only the horizon before them. 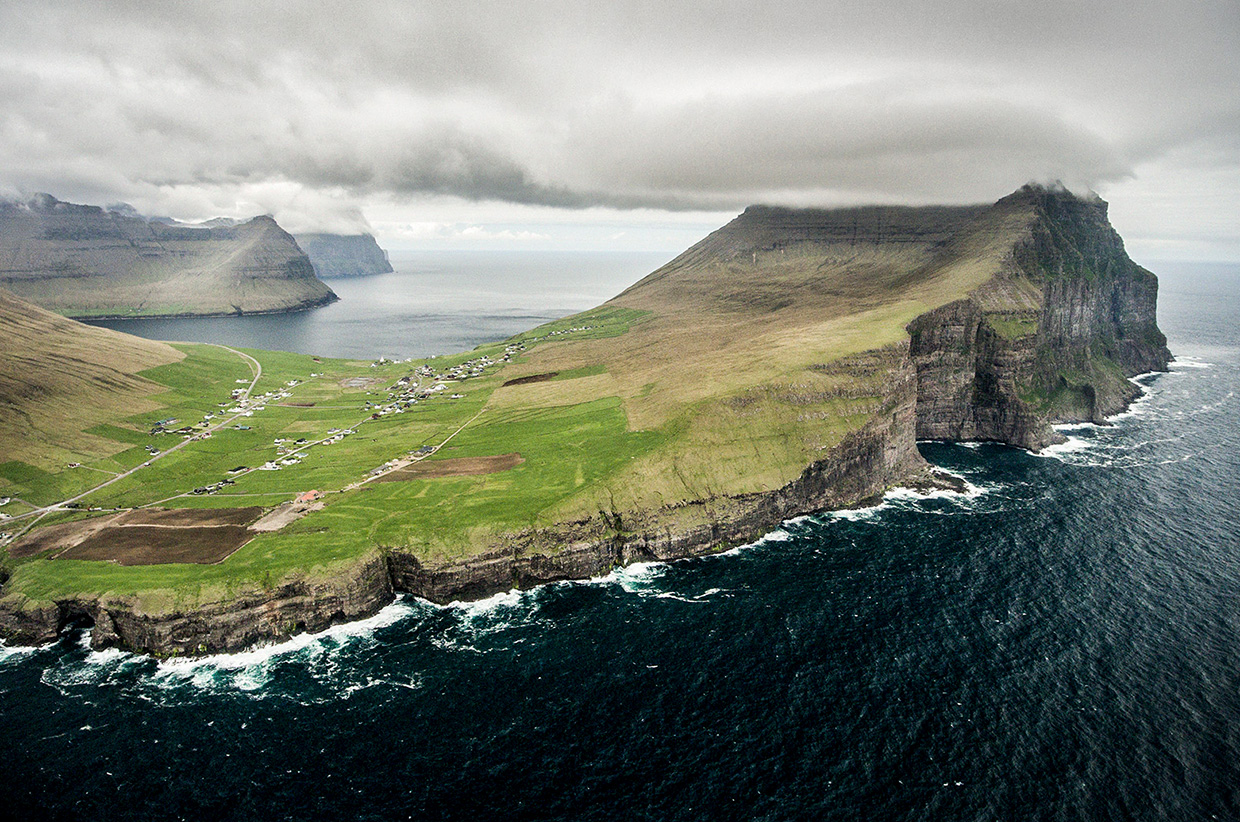 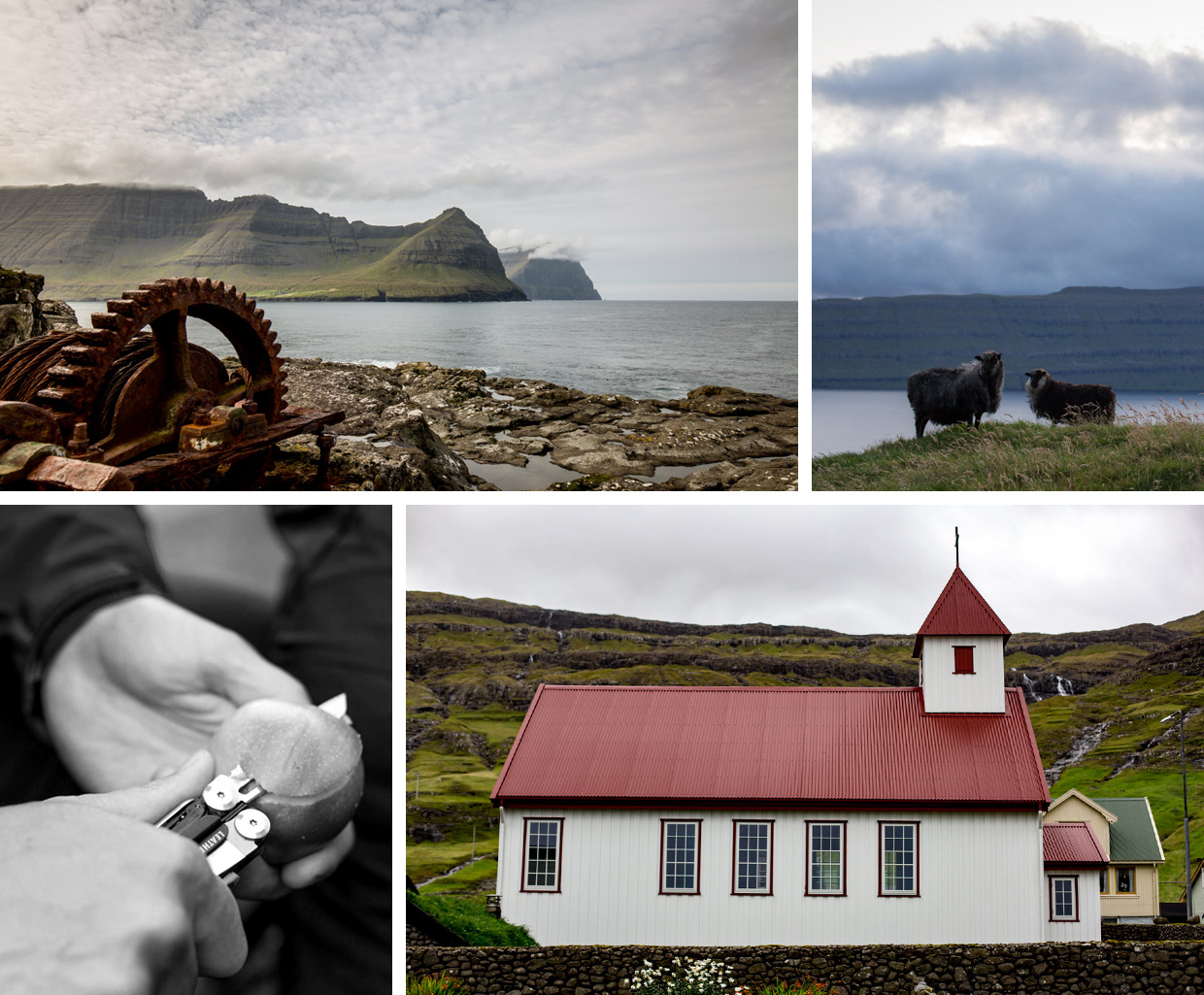 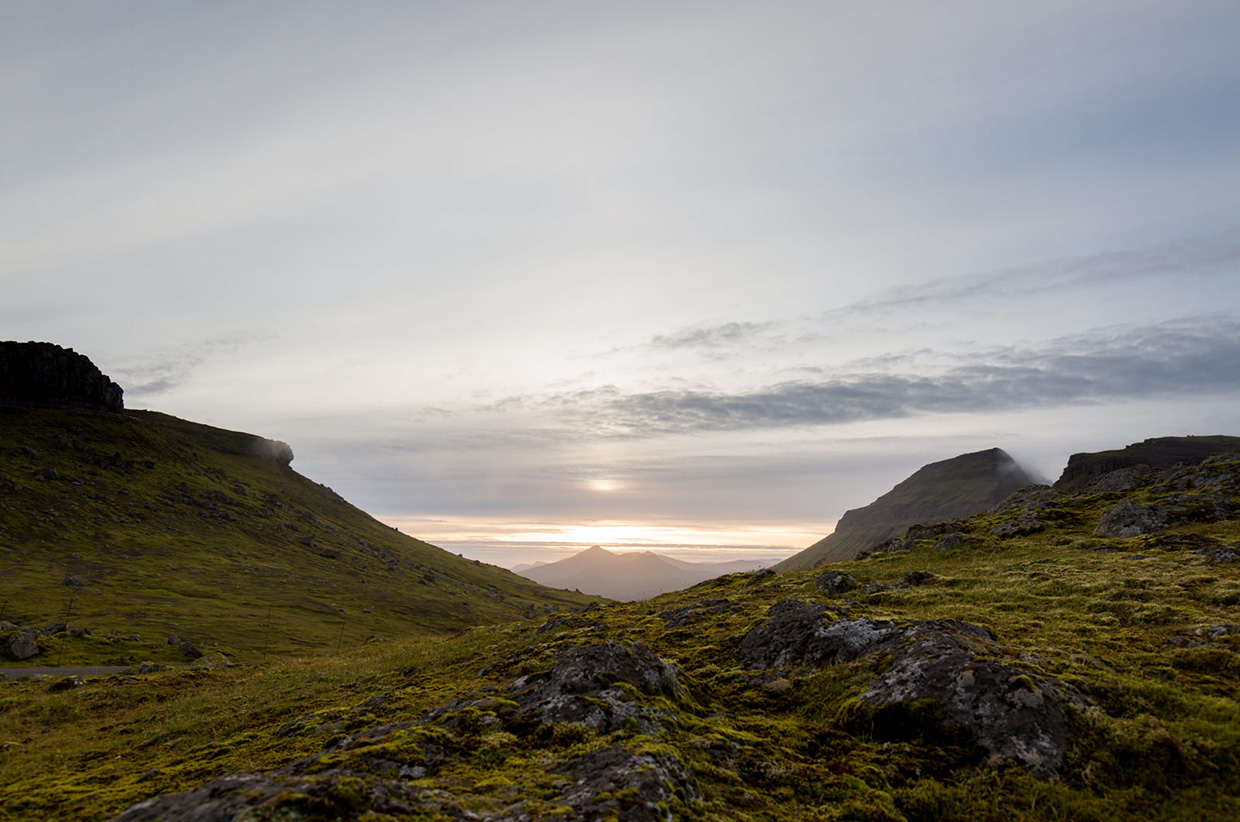